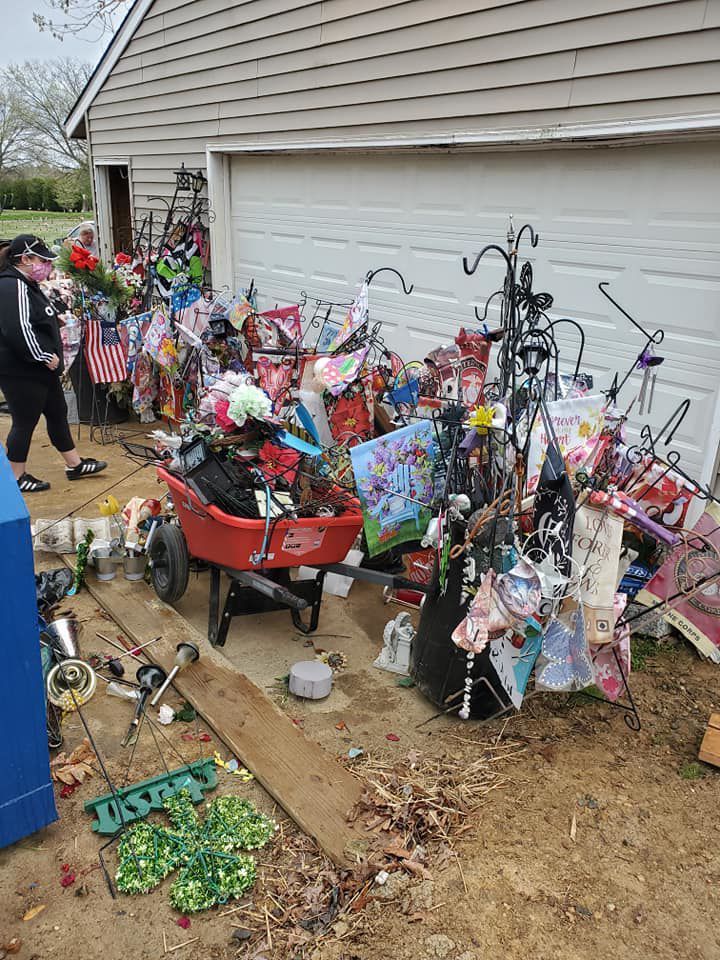 Some of the wreaths, flowers and flags that decorated graves at Sunset Memorial Gardens are piled up near the cemetery’s maintenance shed. 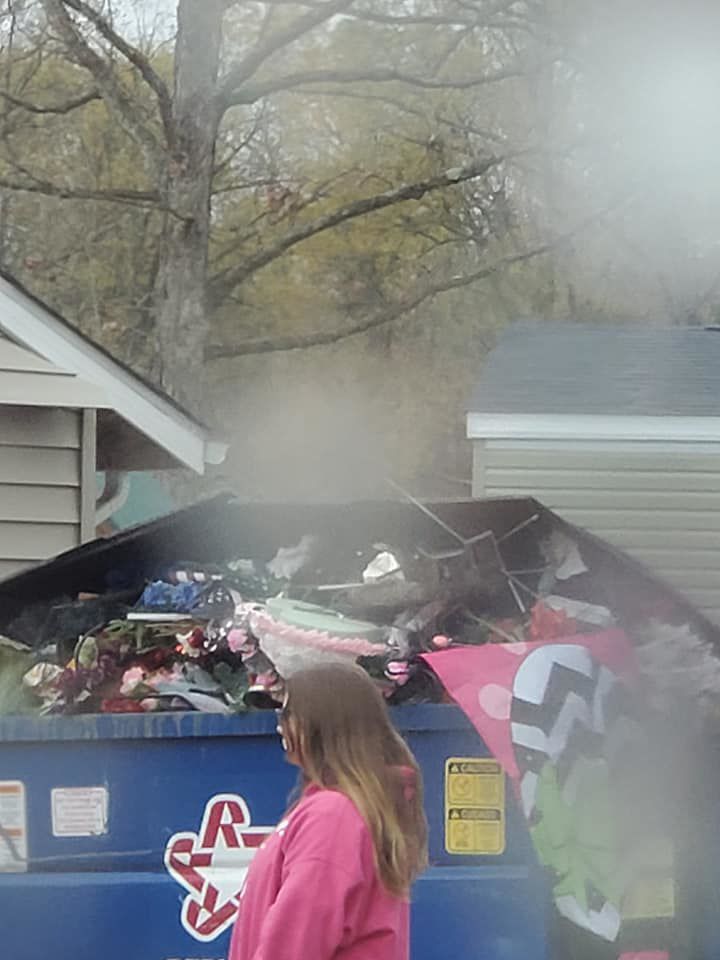 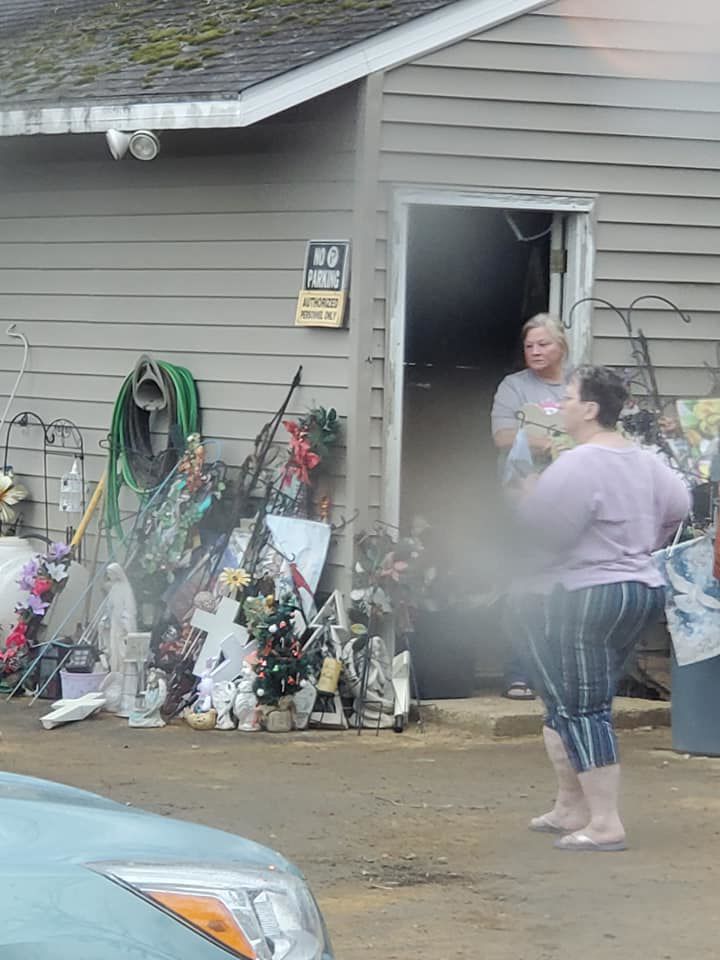 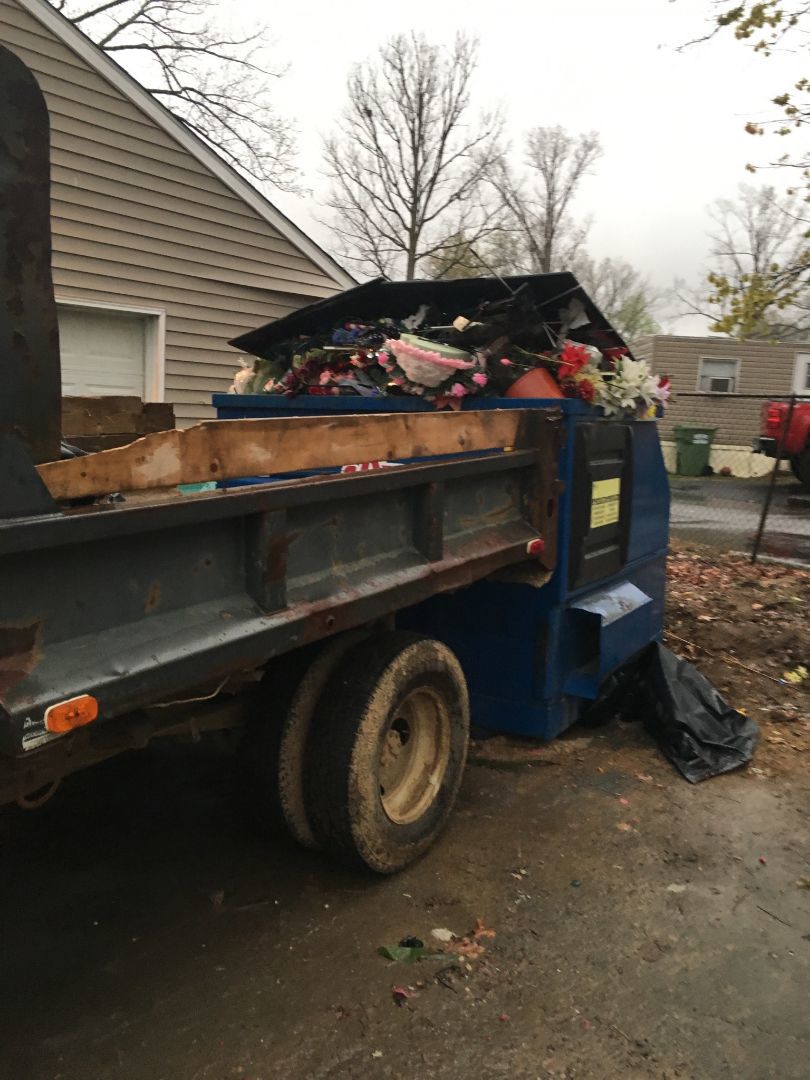 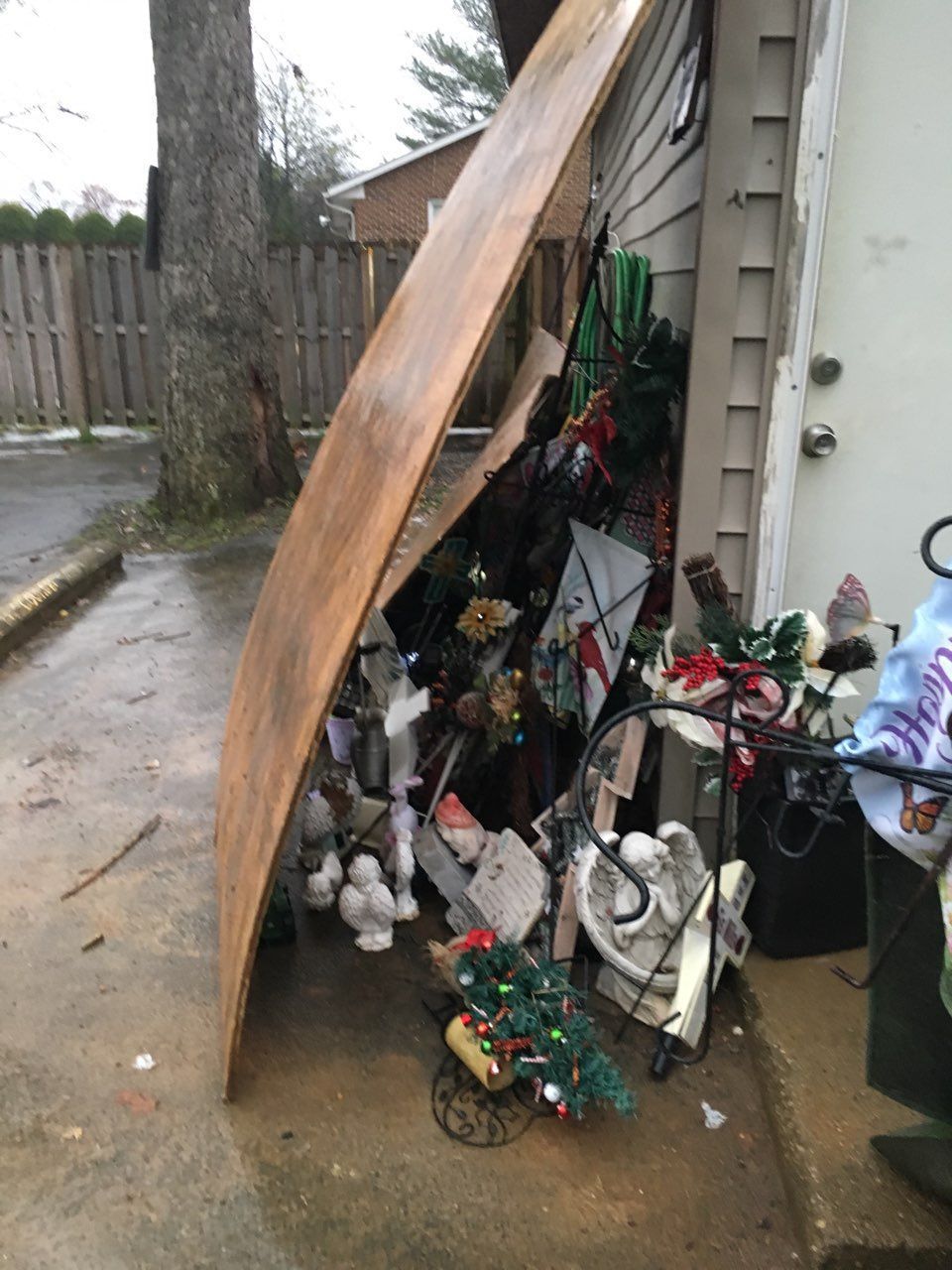 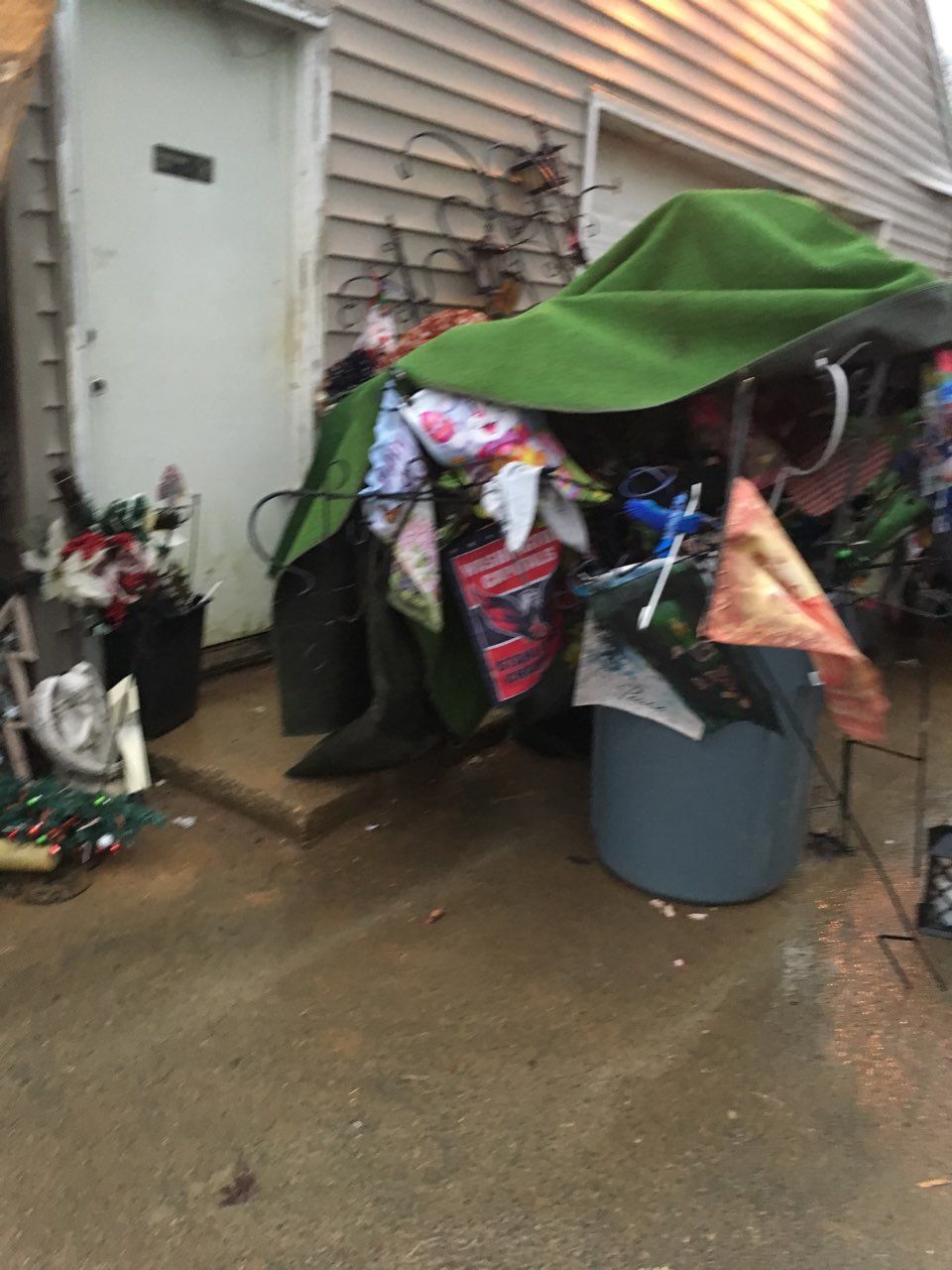 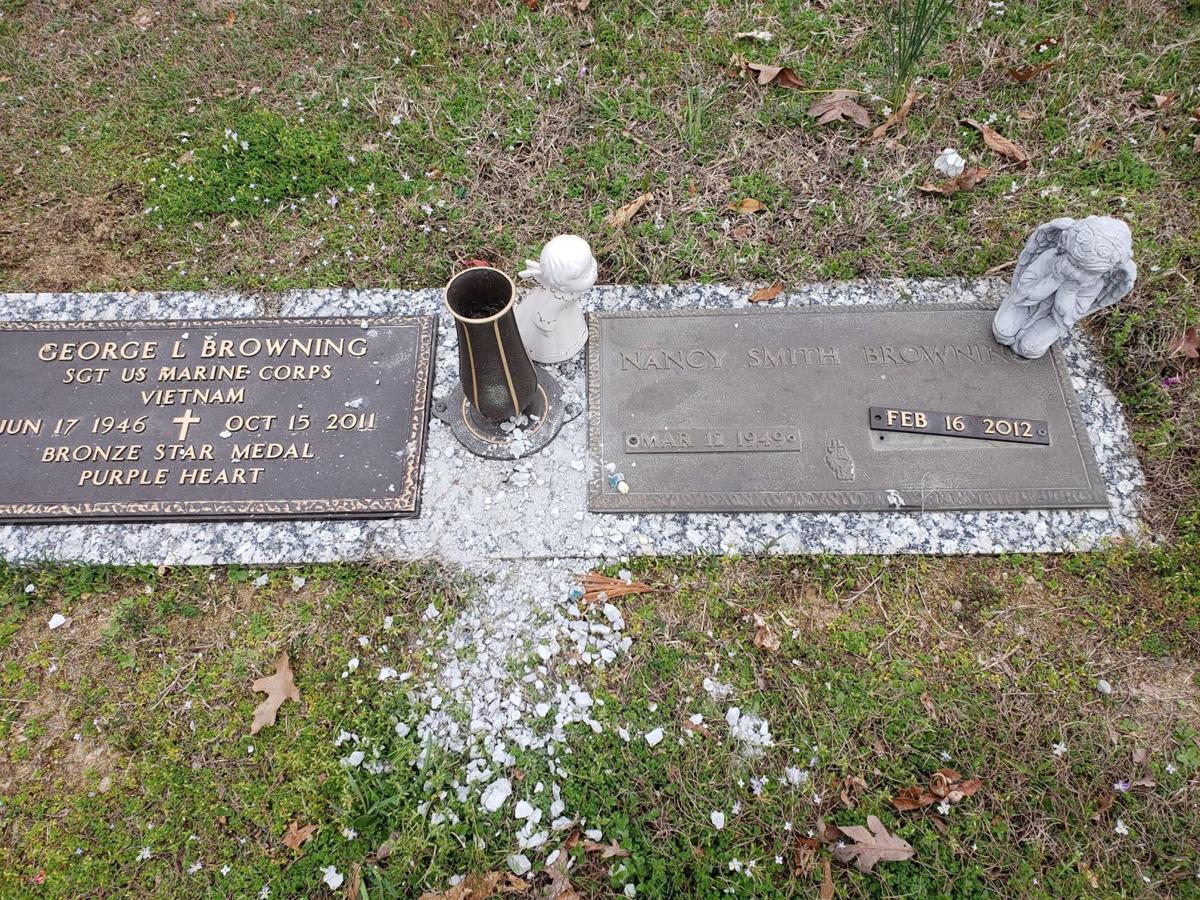 Some of the wreaths, flowers and flags that decorated graves at Sunset Memorial Gardens are piled up near the cemetery’s maintenance shed.

For the past 17 years, Cindy Robinson brought flowers to the grave sites of her relatives at Sunset Memorial Gardens in Spotsylvania County.

In preparation for Easter, Robinson, who lives in Spotsylvania, recently placed flowers and a personal note at her grandmother’s resting place, only to learn on social media Tuesday that flowers and other personal items had been removed from multiple graves at the cemetery and were being thrown into common heaps by a work crew.

“Everything is in a pile; I can’t retrieve them,” said Robinson. “It’s useless at this point. This is like stealing from a loved one during a crisis. All I can do is pray.”

Robinson wasn’t alone. Word soon spread on social media that officials at the cemetery on Loren Drive off U.S. 1 were rounding up and discarding hundreds of flowers, wreaths, mementos, banners and flags.

Many of the frustrated family members expressed their outrage online.

“You people are unbelievable to even be doing this at a time like this when people can’t even get out to their loved one’s gravesite,” Nicki Smith wrote on Facebook.

Local representatives from Sunset Memorial Gardens could not be reached for comment, but a representative from the cemetery’s parent company said notifications announcing the clean-up were posted on banners in the cemetery two months prior to the event.

Lindsay Granson, vice president of sales and marketing of StoneMor Inc., headquartered in Trevose, Pa., said notifications of the clean-up were sent to those customers who had open accounts with the cemetery, along with their regular billing. Granson said notifications were also posted on social media, and a public notice was published March 15 in The Free Lance–Star. That notice included Oak Hill and Laurel Hill cemeteries.

Jessica Benson of Spotsylvania went to the cemetery Tuesday after reading online about what was happening. Benson has several family members interred at Sunset Memorial Gardens.

“People were crying, there were older people coming out that shouldn’t be out, but they were worried about finding their belongings,” she said. “What a lack of compassion.”

Benson, who said she is “completely disgusted” with the cemetery, said she could not locate any of the items she had laid at her relatives’ gravesites.

“Literally anything that was not on the actual headstone was thrown over by the dumpster like trash,” said Benson. “Cast iron stuff, flags, solar lights, beautiful wind chimes, everything was all entwined. I could not believe it. … I am 100 percent beside myself.”

“We responded about 5:50 p.m. [Tuesday] for a large dispute between family members and employees at the cemetery,” said Maj. Troy Skebo of the Spotsylvania Sheriff’s Office. “After consulting with the commonwealth’s attorney, the event that occurred at the cemetery is a civil matter. The indiscretion shown to these families is unrepairable, and our thoughts and prayers go out to those affected.”

Family members said a mid-March social media post on the Sunset Memorial Gardens page announced a spring cleanup would be held at the cemetery on March 31. In that notice, lot owners and their heirs were asked to remove all grave decorations.

“[Cemetery employees] removed everything that’s not in one of their vases,” said Robinson. “I called over, [a cemetery staff member] immediately started quoting rules to me from the rulebook and told me, ‘You were given a copy of the bylaws.’ She was rude and obnoxious.”

“It could very well be in the bylaws, but can’t we find another time to go over there to get that stuff?” asked Wanda Hogue of Spotsylvania. “With the coronavirus going around, the cemetery is not a place someone jumps to go to right away with everything else going on.”

Hogue has 10 relatives interred at the cemetery and said what she found in the aftermath of the flower and memorabilia round-up were hundreds of items haphazardly discarded into a dumpster, or piled into a maintenance shed, covered with plastic tarps.

Granson said crews at Sunset Memorial Gardens removed only Christmas decorations and tattered items, flags, and old, non-permanent decorations on Tuesday, as well as items not permitted by the cemetery’s bylaws.

“We do this every fall and spring,” said Granson. “We called customers who had large decorations.”

“You should do better, especially with what we’re going through now,” said Spotsylvania Battlefield District Supervisor Chris Yakabouski. “I don’t think it was enough. These are people’s loved ones and when they’re putting personal items and other items of affection there, and you haul it away like it’s leaves or garbage on the side of the road, that’s not right. My heart goes out to the people having to deal with this.”

Granson said all items removed from gravesites were “put to the side” for relatives to retrieve, but some families insist it was haphazardly tossed into piles or a dumpster.

“If you’re going to give us a chance to pick it up, who’s going to go into a dumpster?” asked Hogue.

Granson said families who need help locating a specific item should contact the local staff members at the cemetery.

“I encourage them to reach out to the general manager within the park,” said Granson. “We are here to help the families. If we took something by accident, we will do our best to get it back.”

Spotsylvania resident Mary Lee Carter said in the past, the local staff and maintenance crews at the cemetery were courteous, caring and did an impressive job maintaining the grounds. But she said that changed after it was acquired by StoneMor.

“They’ve thrown away my flowers,” said Carter, a former county supervisor. “There are special things many of us have there that they’ve knocked loose and pay no attention to. They run over the headstones and knock things loose. Those of us who have paid quite a bit of money and have loved ones there want them taken care of, and that’s not being done.”