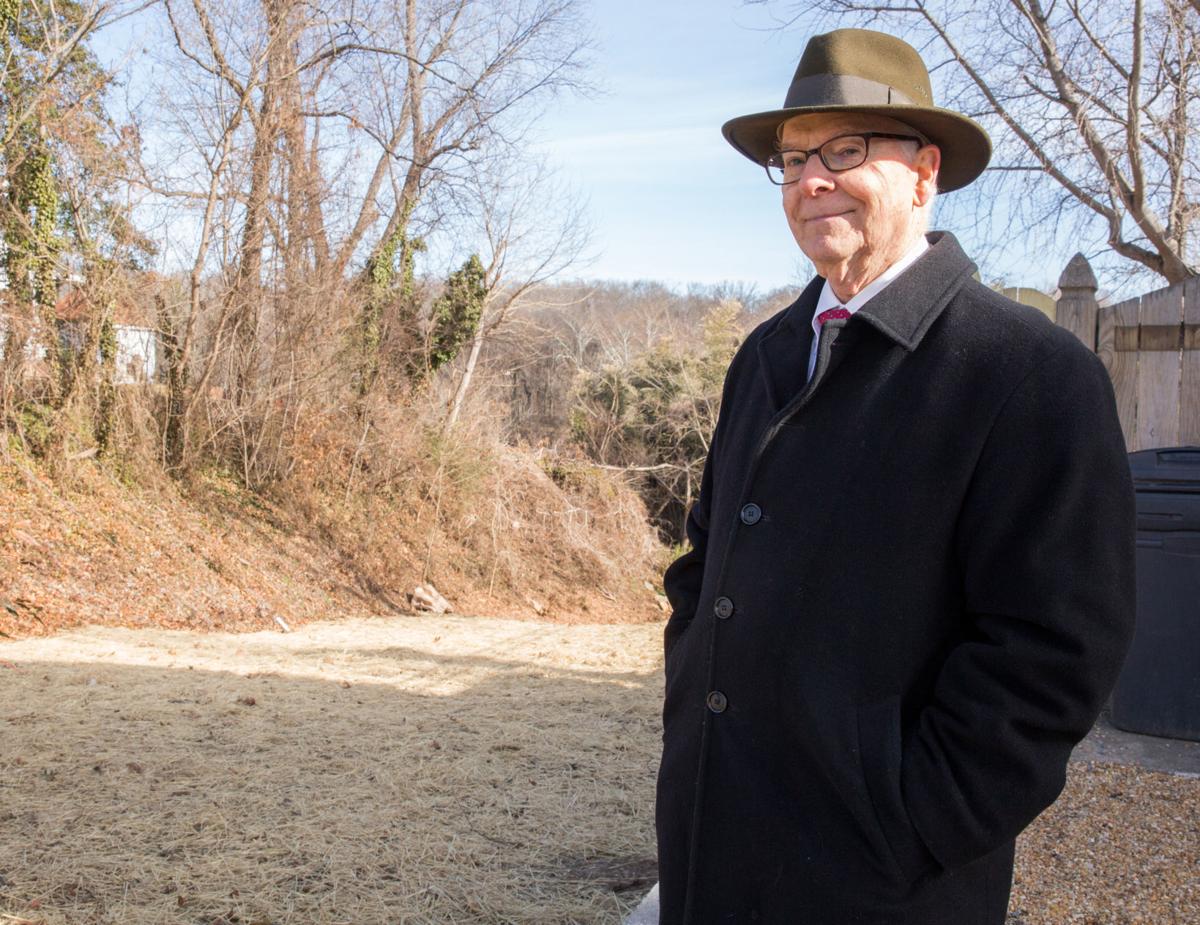 Blanton Massey’s research of the city-owned alley (above) next to his Caroline Street home in Fredericksburg led to John DeBaptiste, a free black man who owned a wharf at the end of the street, and his remarkable family. 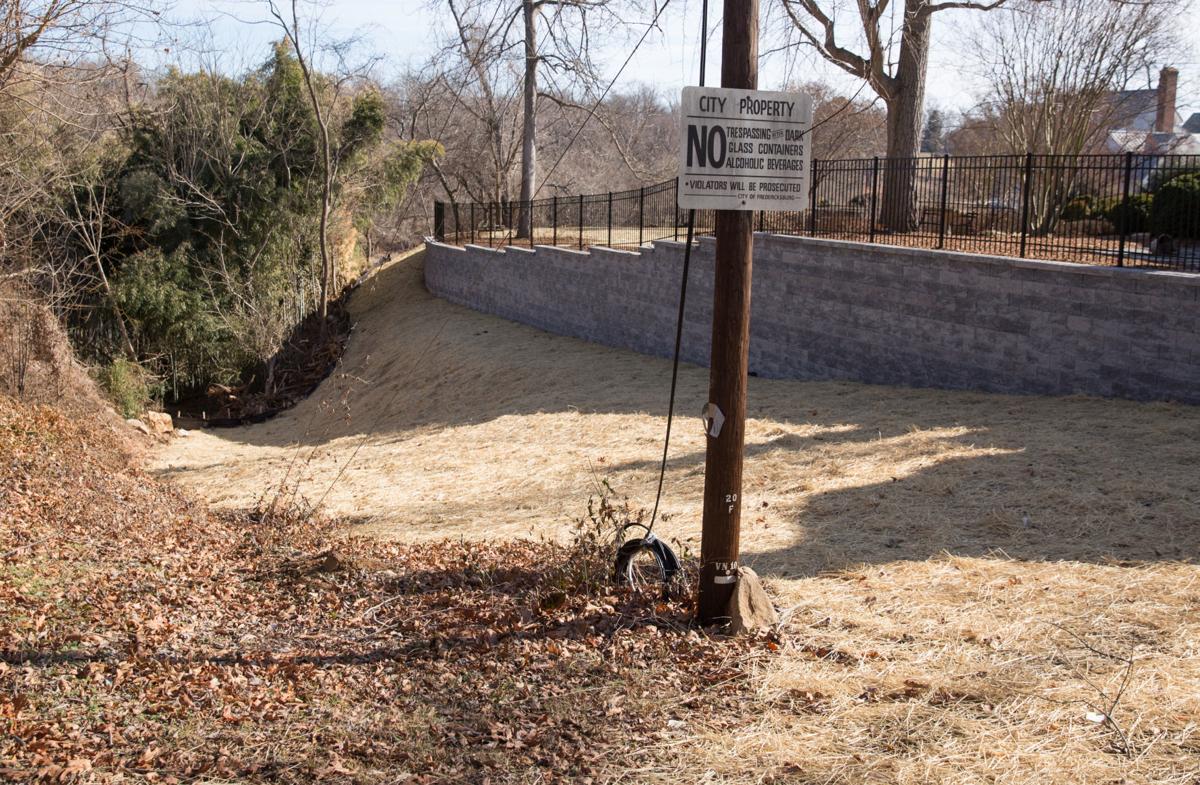 Blanton Massey would like to see this city-owned alley near his Fredericksburg home become a pocket park with a plaque honoring the DeBaptiste family. Their history includes Underground Railroad efforts. 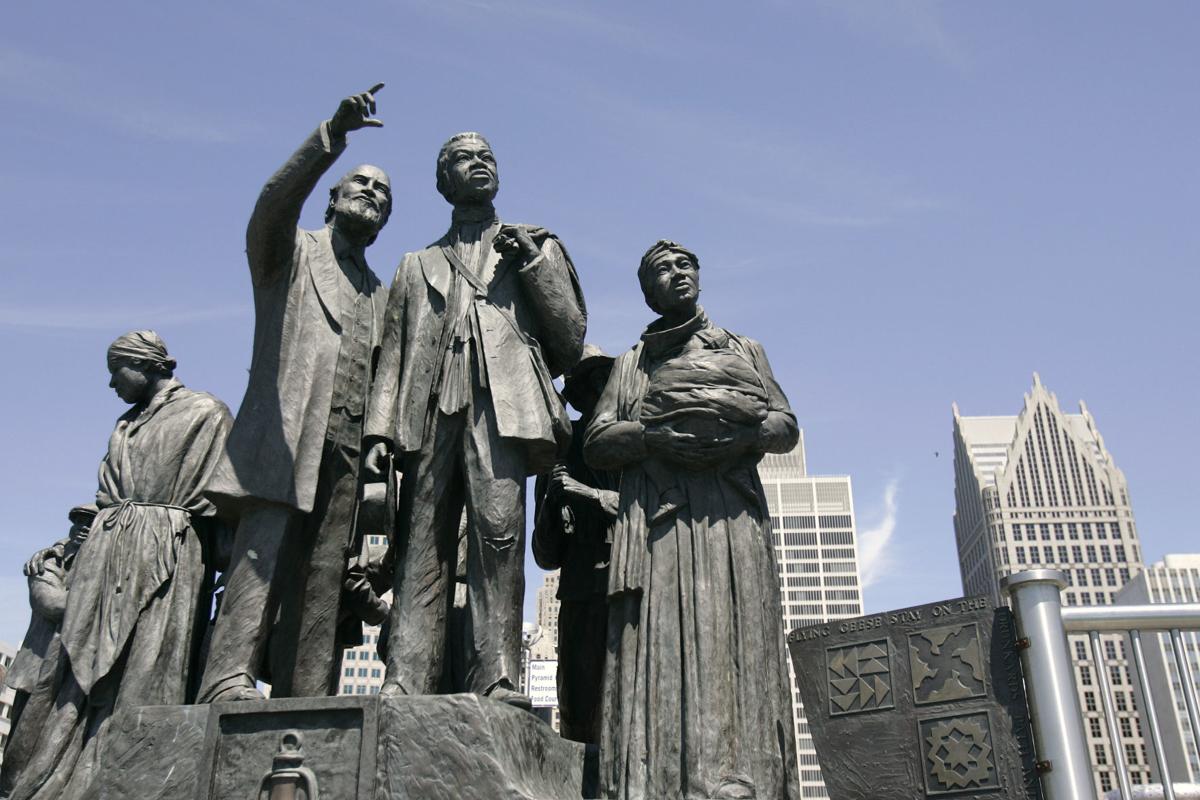 George DeBaptiste points slaves toward freedom in this statue in Detroit.

Blanton Massey’s research of the city-owned alley (above) next to his Caroline Street home in Fredericksburg led to John DeBaptiste, a free black man who owned a wharf at the end of the street, and his remarkable family.

Blanton Massey would like to see this city-owned alley near his Fredericksburg home become a pocket park with a plaque honoring the DeBaptiste family. Their history includes Underground Railroad efforts.

George DeBaptiste points slaves toward freedom in this statue in Detroit.

A slave nervously awaits the signal to begin his journey to freedom on the first page of “Bound for Canaan: The Epic Story of the Underground Railroad, America’s First Civil Rights Movement.”

George DeBaptiste, the man who’d convinced him to run and planned his escape, grew up in a prominent free black family in Fredericksburg. He moved north when things became increasingly difficult for slaves and free blacks in the South, and became a leader in the Underground Railroad. He’s said to have helped nearly 200 escaping slaves between 1841 and 1846.

Today, DeBaptiste figures prominently in a larger-than-life Gateway to Freedom memorial in Detroit. He’s depicted pointing the way for seven slaves preparing to cross the Detroit River to Canada, where they would be free. There’s also a historic marker on the site of his home in Detroit, and he’s mentioned in another of the city’s markers as being among the men attending a meeting between Frederick Douglass and John Brown seven months before Brown’s raid on Harpers Ferry.

Yet there are no monuments or historical markers in Fredericksburg telling of his exploits—or those of his family. They include patriarch John DeBaptiste, who’d served aboard Fielding Lewis’ sloop-of-war Dragon during the American Revolution. He also owned French John’s Wharf, which was at the end of today’s Canal Street, and operated the ferry there. His sons owned businesses and property in Fredericksburg, and his grandsons included not only George DeBaptiste but Richard DeBaptiste, a prominent Baptist preacher and abolitionist, and Benjamin DeBaptiste, who served in the regiment that inspired the 1989 movie “Glory.”

A QUEST FOR RECOGNITION

He became interested in the DeBaptiste family and their ties to Fredericksburg last year while researching the history of the alley next to the house he and his wife, Betty, own at 1517 Caroline St. The alley, which is city property, once led to John DeBaptiste’s wharf.

Massey said he’d like to see the alley turned into a pocket park, and have a plaque honoring the DeBaptistes at the site of French John’s Wharf at the northern end of the Historic District at Caroline and Canal streets.

“The plaque might cause a reflection of how un-indentured whites and free black colonists interacted freely during the early days of the United States,” Massey wrote in a 47-page packet of information he’s compiled about the DeBaptistes. “How free blacks could have included themselves as entitled to liberty and justice for all such as contained in Thomas Jefferson’s eloquent words contained in the Declaration of Independence.”

Massey found some information about the DeBaptistes in Ruth Coder Fitzgerald’s “A Different Story: A Black History of Fredericksburg, Stafford, and Spotsylvania, Virginia” and talked with Jervis Hairston, who leads an occasional black history tour of Fredericksburg. Doing research at the Central Rappahannock Regional Library and Google searches turned up even more about the family. He also got his hands on a copy of “Bound for Canaan,” written by historian Fergus Bordewich and first published in 2005.

John DeBaptiste, Massey discovered, spoke French and English, and immigrated from St. Kitts to Fredericksburg. He became a respected member of the city’s black community, and is buried in the Union Church Cemetery in Falmouth. His grave bears a Sons of the American Revolution marker, and Fredericksburg named him to its “Wall of Honor” in 2000.

“He had six children,” Massey said. “They became entrepreneurs and tradesmen in the city, jobs blacks could hold. Two of his children owned a corner lot across Charles Street from the slave auction block. These children owned at least one slave. DeBaptiste owned two slaves himself because he was charged at one point with allowing his slave to go about as if free and to rent himself out.”

Massey said he grew especially interested in the younger George DeBaptiste, who was born around 1815, received a basic education in Fredericksburg, and learned the barber’s trade in Richmond. He worked for a number of wealthy white men, and eventually served as a personal steward for Gen. William Henry Harrison. He accompanied Harrison from Madison, Ind., to Washington when he became president and returned there after Harrison died of pneumonia less than a month after being sworn into office.

DeBaptiste, like a number of Fredericksburg’s well-to-do black community, had moved north due to growing tensions caused by the antislavery movement, slave uprisings such as Nat Turner’s Rebellion and the resulting government clampdown on education and religious assembly for both free blacks and slaves.

He settled in a middle-class community of free blacks in Madison, Ind.’s Georgetown District. It lay just across a narrow, shallow stretch of the Ohio River from Kentucky, and was a center of Underground Railroad activity. DeBaptiste became a leader in the community’s activities to hide escaping slaves and help them reach the next station on their way to freedom. His exploits inspired the opening scene in “Bound for Canaan,” and aroused enough suspicion that Kentucky put a $1,000 bounty on his head.

DeBaptiste moved to Detroit, where other family members were living, by 1846. He bought and sold several businesses, and at one point purchased the steamship T. Whitney and hired a white man as its captain. The boat could be used for commercial purposes, but it also secretly carried slaves across the Detroit River to freedom in Canada.

On March 12, 1859, DeBaptiste was one of the locally prominent abolitionists who met in Detroit with Frederick Douglass and John Brown to listen to Brown’s plans for armed rebellion at Harpers Ferry. He continued helping fugitive slaves, and was among the city’s black leaders who were instrumental in forming the First Michigan Colored Infantry Regiment in 1863. He was appointed its sutler, and followed the regiment on its campaigns.

After the war, DeBaptiste opened a catering business in Detroit, worked for the Freedman’s Bureau, and advocated for the right of black students to attend the city’s public schools. In 1870, he became the first black to be elected as a delegate to Michigan’s Republican nominating convention. He died five years later.

Massey noted that a group in Madison, Ind., is trying to establish their own pocket park in the Georgetown District that would highlight their city’s rich Underground Railroad history and include a bust of George DeBaptiste.

HFFI executive director Emily Taggart Schricker wrote him a letter suggesting that the park could be a possible project for the grassroots Face The River campaign or possibly a Boy Scout or Eagle Scout project.

Massey has also presented his findings to the city’s Memorials Advisory Commission, on which his wife serves. He hasn’t come before City Council with it yet, but Mayor Mary Katherine Greenlaw said that doesn’t mean members wouldn’t like the idea.

“History is mostly told through events, people and sites, and Fredericksburg has all three,” Massey wrote in the summary to his booklet about the DeBaptistes. “However, our history needs to be told not only through the lives and associated sites of the dominant class of people like Fielding Lewis but also through the lives and sites of people like John DeBaptiste and his descendants born in Fredericksburg.”

History is mostly told through events, people and sites, and Fredericksburg has all three. —BLANTON MASSEY