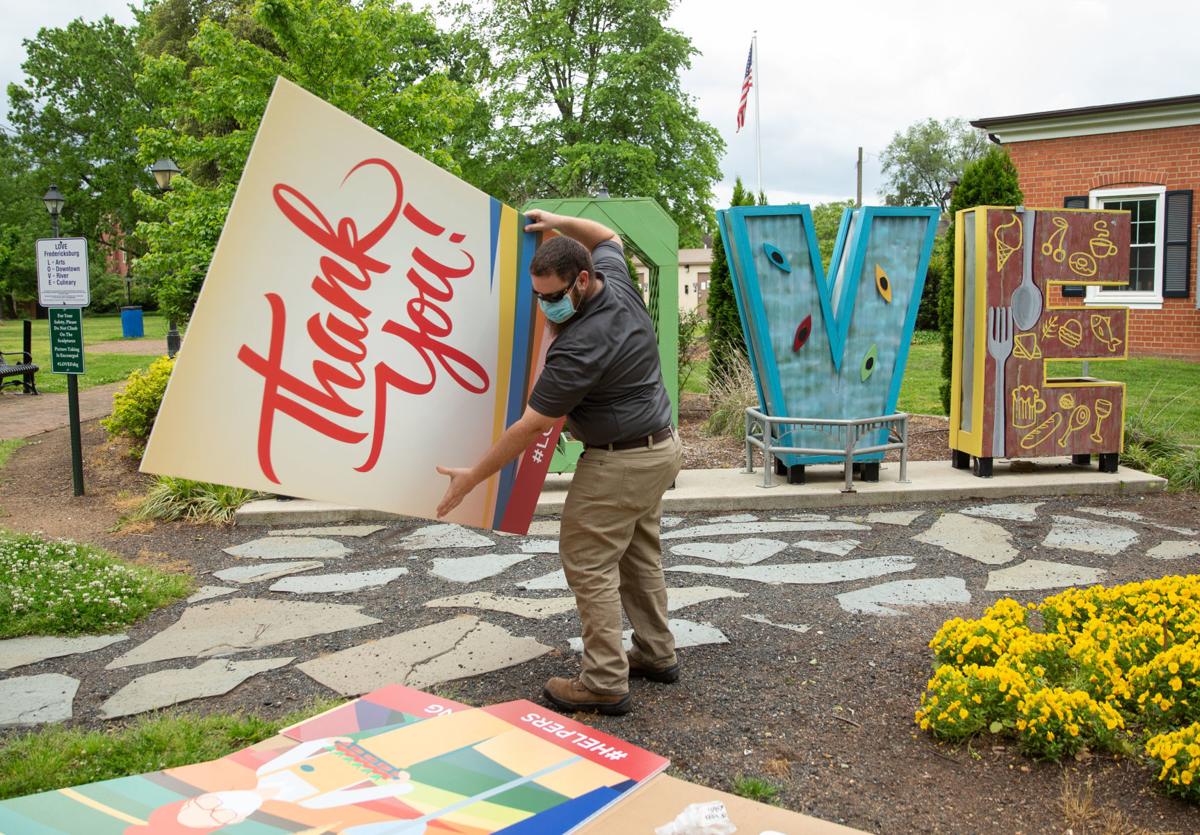 Andrew Cooley installs signs at Hurkamp Park in Fredericksburg on Wednesday. The city worked with FastSigns to put up a temporary cover honoring front-line workers over the LOVE sculpture, which is part of Virginia’s tourism campaign. 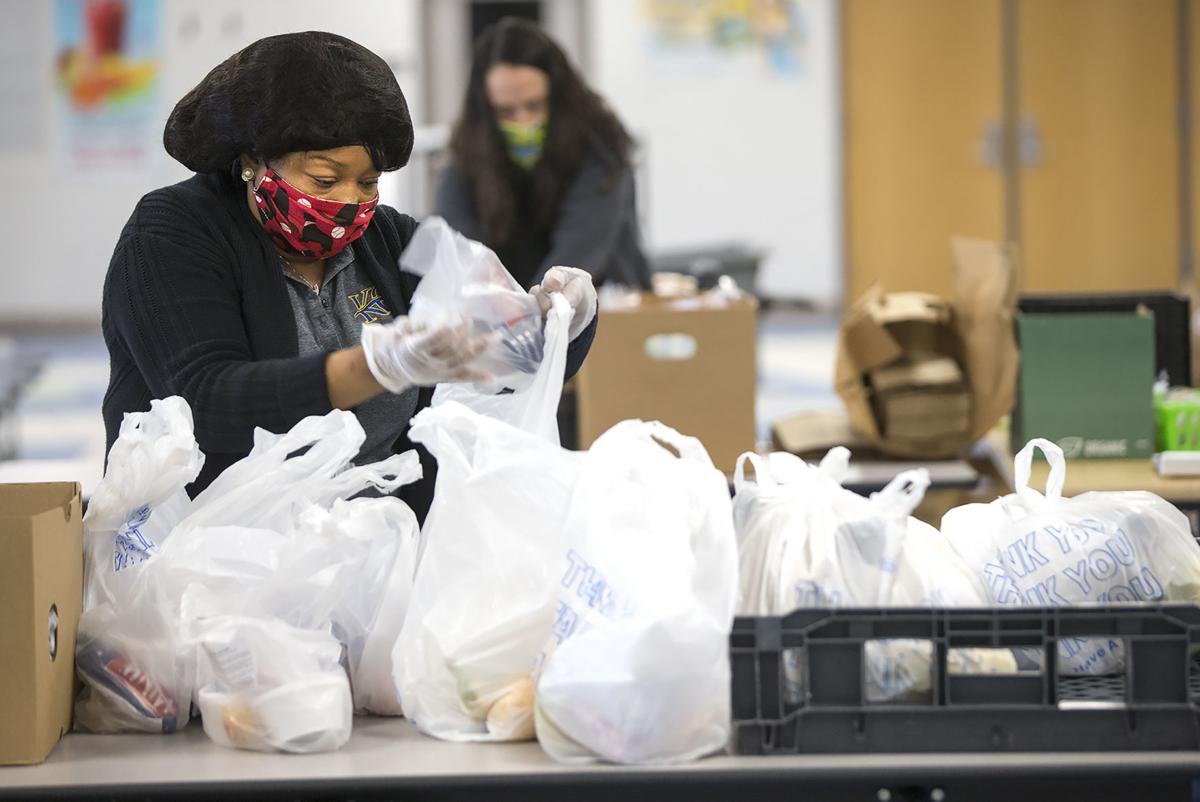 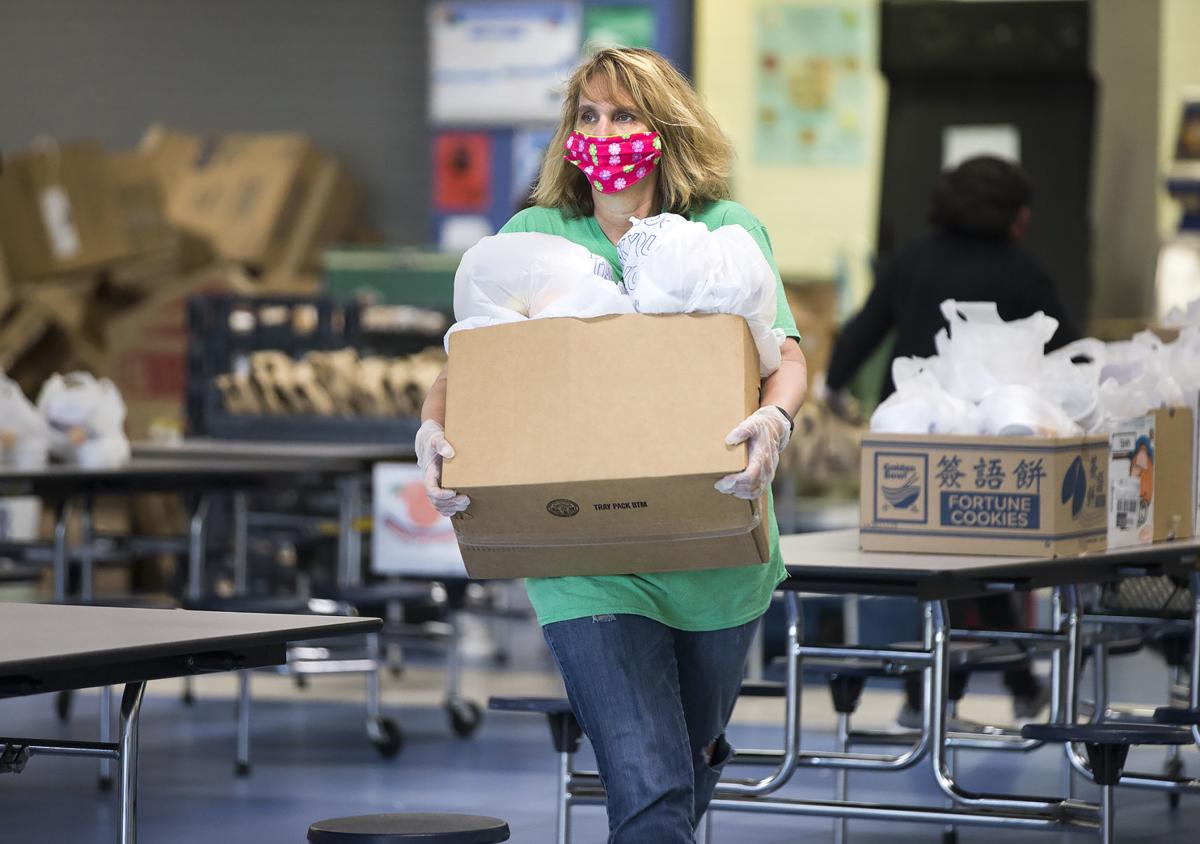 Kris Chuska, a volunteer from Lifepoint Church, readies boxes of meals destined for King George students at the county’s high school on Wednesday. 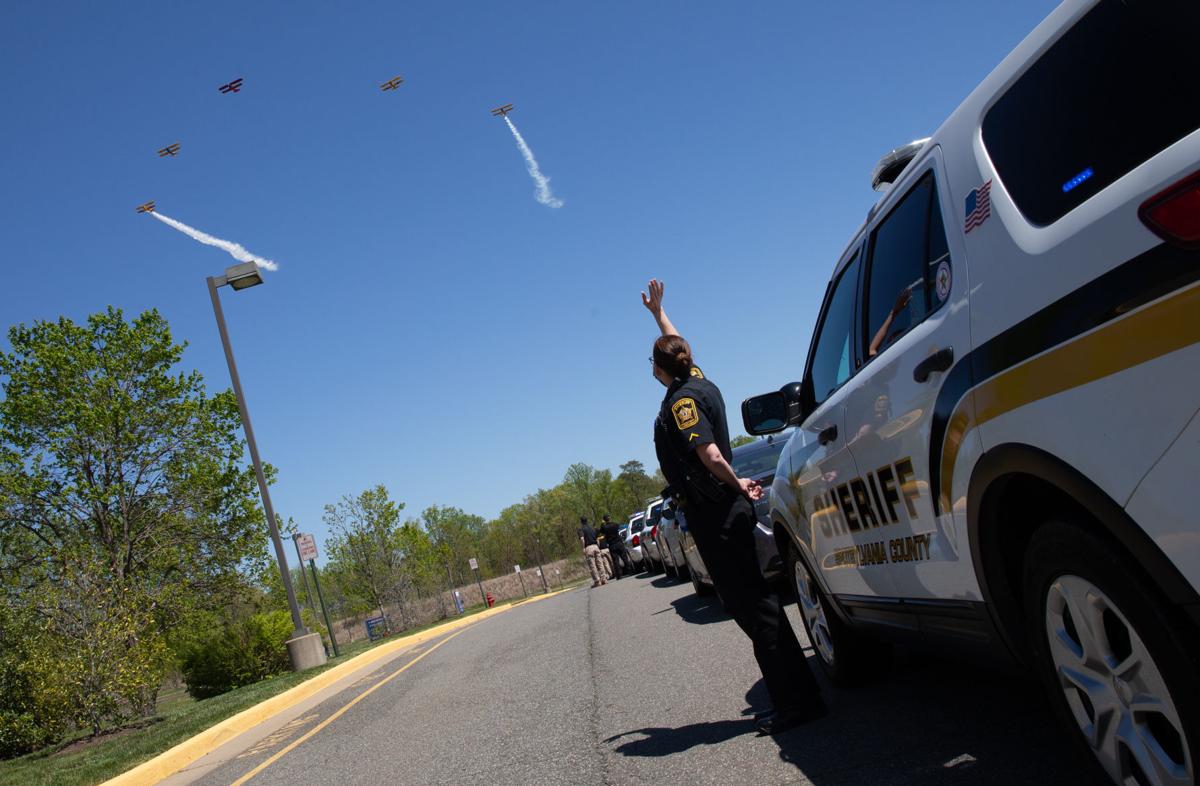 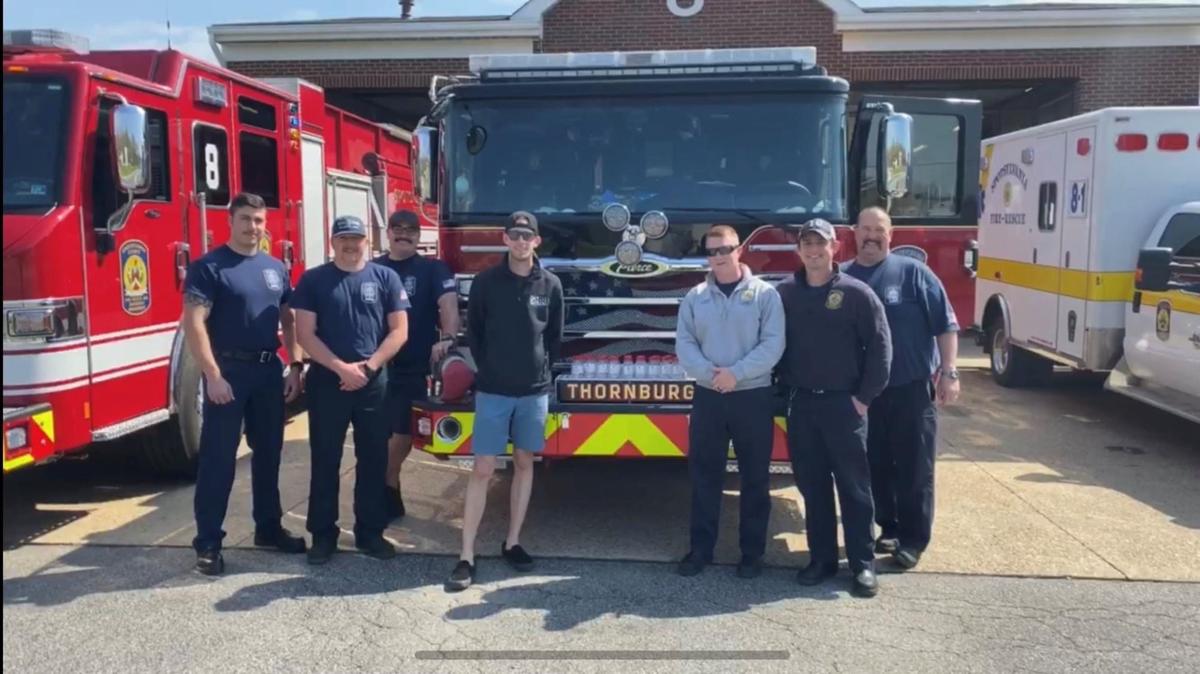 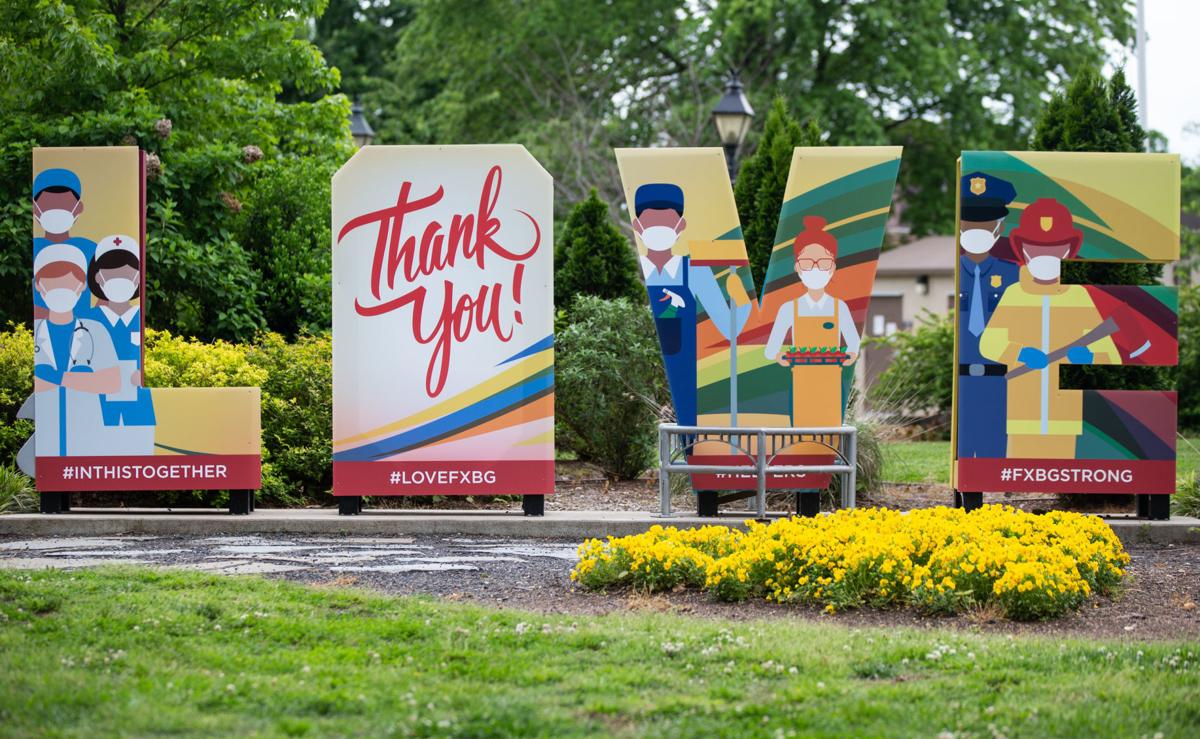 Signs in the city put a spotlight on essential workers. 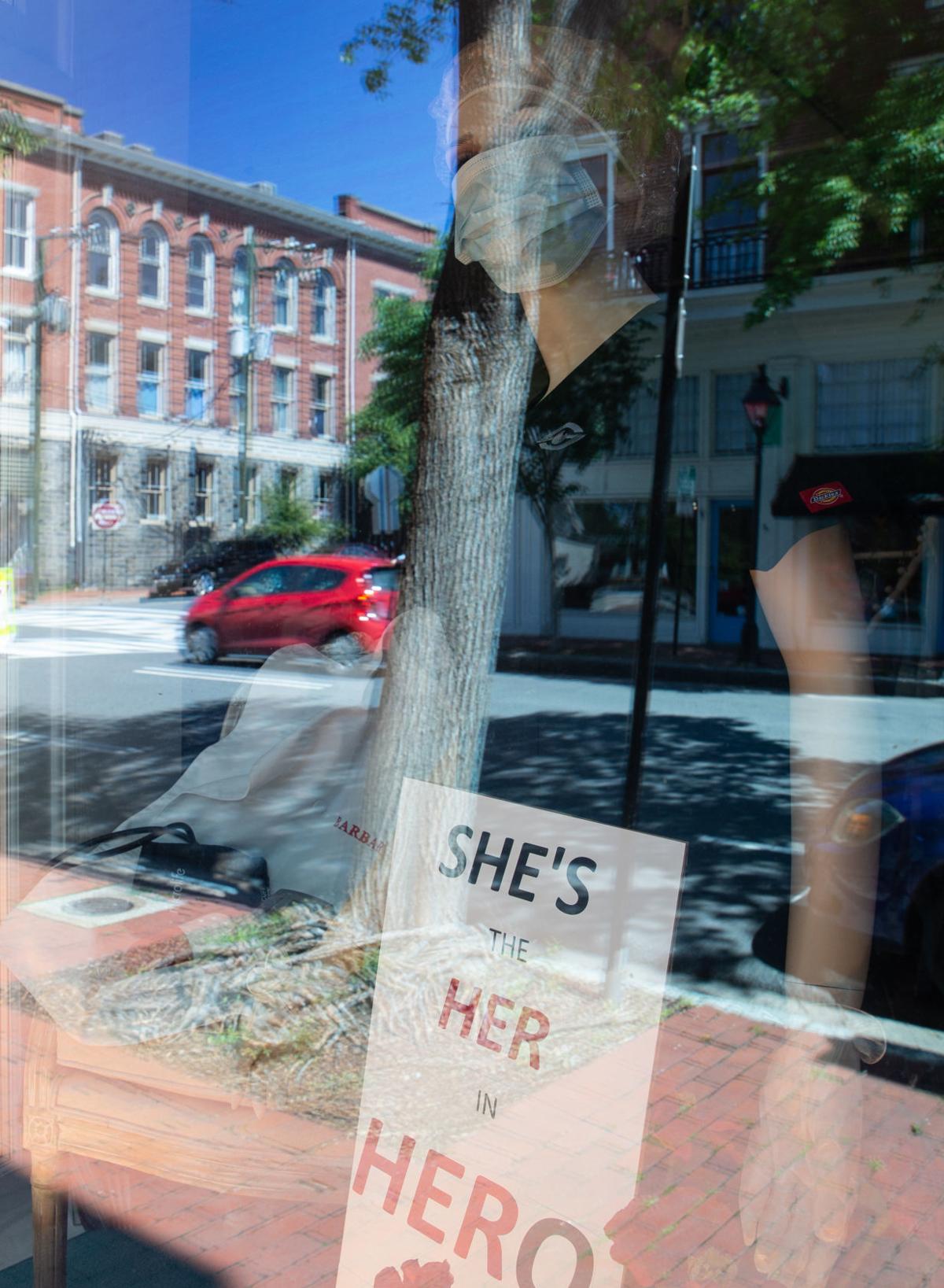 A display in the window of Lady Legacy in downtown Fredericksburg shows support for health care workers. 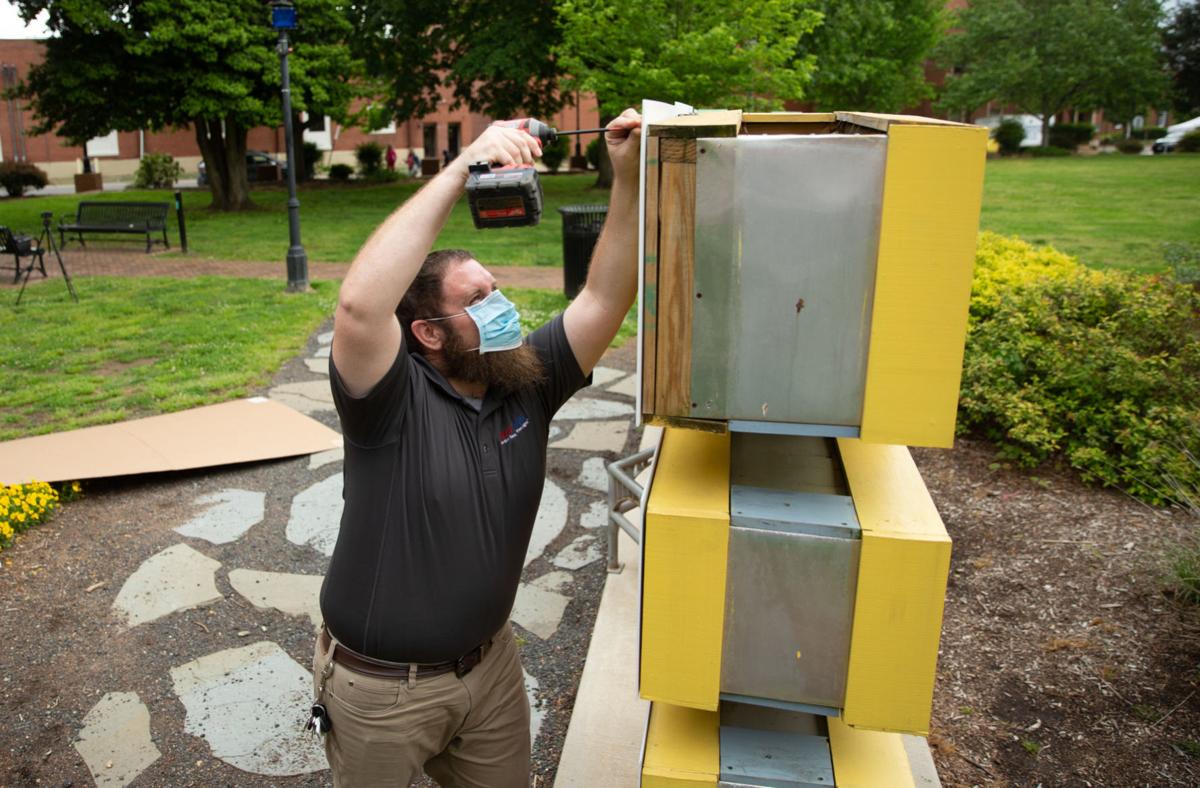 Andrew Cooley from FastSigns modifies the LOVE sign so the display honors local first responders and other front-line workers in Hurkamp Park in the city.

Andrew Cooley installs signs at Hurkamp Park in Fredericksburg on Wednesday. The city worked with FastSigns to put up a temporary cover honoring front-line workers over the LOVE sculpture, which is part of Virginia’s tourism campaign.

Kris Chuska, a volunteer from Lifepoint Church, readies boxes of meals destined for King George students at the county’s high school on Wednesday.

Signs in the city put a spotlight on essential workers.

A display in the window of Lady Legacy in downtown Fredericksburg shows support for health care workers.

Andrew Cooley from FastSigns modifies the LOVE sign so the display honors local first responders and other front-line workers in Hurkamp Park in the city.

Providing everything from pizza to prayers for caregivers and first responders, members of the Fredericksburg community are stepping up to help during the pandemic—and local leaders and hospital officials are grateful.

David McKnight, CEO of Spotsylvania Regional Medical Center, has seen the outpouring of love as churches and individuals have donated things such as meals, cookies and cards.

“I’m humbled by it, and I’m just in awe,” he said. “I don’t know how we could have gotten through this without each other and the community.”

Every day at noon, a different hospital chaplain or pastor associated with the Spotsylvania facility reaches out through a phone app to offer prayers and devotions to anyone who wants to listen. Because the COVID-19 crisis “has been as hard mentally as it has been physically,” McKnight is grateful for the measure of peace the daily prayers provide.

Dr. Mike McDermott, CEO of Mary Washington Healthcare, regularly has given a shout-out to the community, not just for its many donations, but also for the way people have followed recommendations to stay at home and practice social distancing.

“I want to congratulate everybody in our community for doing such a great job,” he said during a recent town hall.

Later, during a video message on the health care system’s website, he added: “We have felt your love and support, and we are deeply grateful.”

“We are very blessed to serve a community that supports the men and women who are committed to fulfill our mission to help others,” he said.

King George County Sheriff Chris Giles said the same last week during a virtual town hall hosted by Cathy Binder, chairwoman of the King George Board of Supervisors. Not only have people shared items to provide personal protection, he said, but they’ve also understood the additional protocols in place to keep people at a proper distance.

“They’re working with the system in these trying times, and it’s greatly appreciated,” Giles said.

Another example of community help came during Binder’s town hall. A resident wanted to know if there were other ways the community could assist county agencies, and when department heads said they thought their needs were covered, Neiman Young, King George’s county administrator, had a thought.

His wife, Stephanie, helps pack lunches at King George High School for children in need of meals, and he said there was a shortage of volunteers. Workers put together two breakfasts and two lunches for each distribution for a total of almost 2,000 meals that are handed out on Mondays, Wednesdays and Fridays, said Anita Davis, school nutrition coordinator.

“I think that is by far the most vulnerable service we have in the community,” Young said about the meal service. “Being able to reinforce the number of volunteers would be a real game-changer for the county.”

Lifepoint Church of King George heard his plea. Within days, church volunteers had put together a schedule of workers to complete the task.

“We are great now,” Davis said.

Mary Washington Healthcare was getting so many ideas from community residents and associates about ways to create personal protective equipment or extend the shelf life of current gear—such as repairing or replacing straps on N95 respirator masks—that it formed an Innovation Council to vet ideas, said Eileen Dohmann, senior vice president and chief nursing officer. The council has been looking at offers that have come in and creating prototypes, she mentioned at a recent town hall.

Some of the ideas came from chemists, biologists and physicists at the Navy base at Dahlgren, said Nick Minor, King George’s director of economic development. They reached out to local hospitals to see how they could help during the crisis.

“As small as we are, in terms of population, we have a huge impact on this region, and that’s something we should all be proud of,” Minor said.

Residents have taken to the skies to do flyovers to thank health care workers or decorated hospital campuses with signs, flags and ribbons. Or they’ve assembled much-needed products, such as bags of Chapstick, lotion, bottled water, hand sanitizer, lens cleaner and handmade ear-saver attachments for masks. HMP Properties, a hotel development and management company, did that recently, and gave the bags to workers at Mary Washington Hospital and Commonwealth Senior Living.

The gift was “minor compared to what they are doing,” said Donna Carter, sales director. “We are all in this fight together, but they are the backbone holding things together.”

Fredericksburg officials agreed with that sentiment and decided to modify the LOVE sign in Hurkamp Park on Wednesday to show gratitude for front-line workers.

The city worked with FastSigns to install a temporary cover over the LOVE sign, which is part of the state’s tourism campaign. The cover shows many of those who’ve continued to work in the midst of the pandemic: health care officials, contractors, waitresses and first responders.

“They are all rising to the occasion to care for others,” said Danelle Rose, tourism services manager with Fredericksburg Economic Development & Tourism.