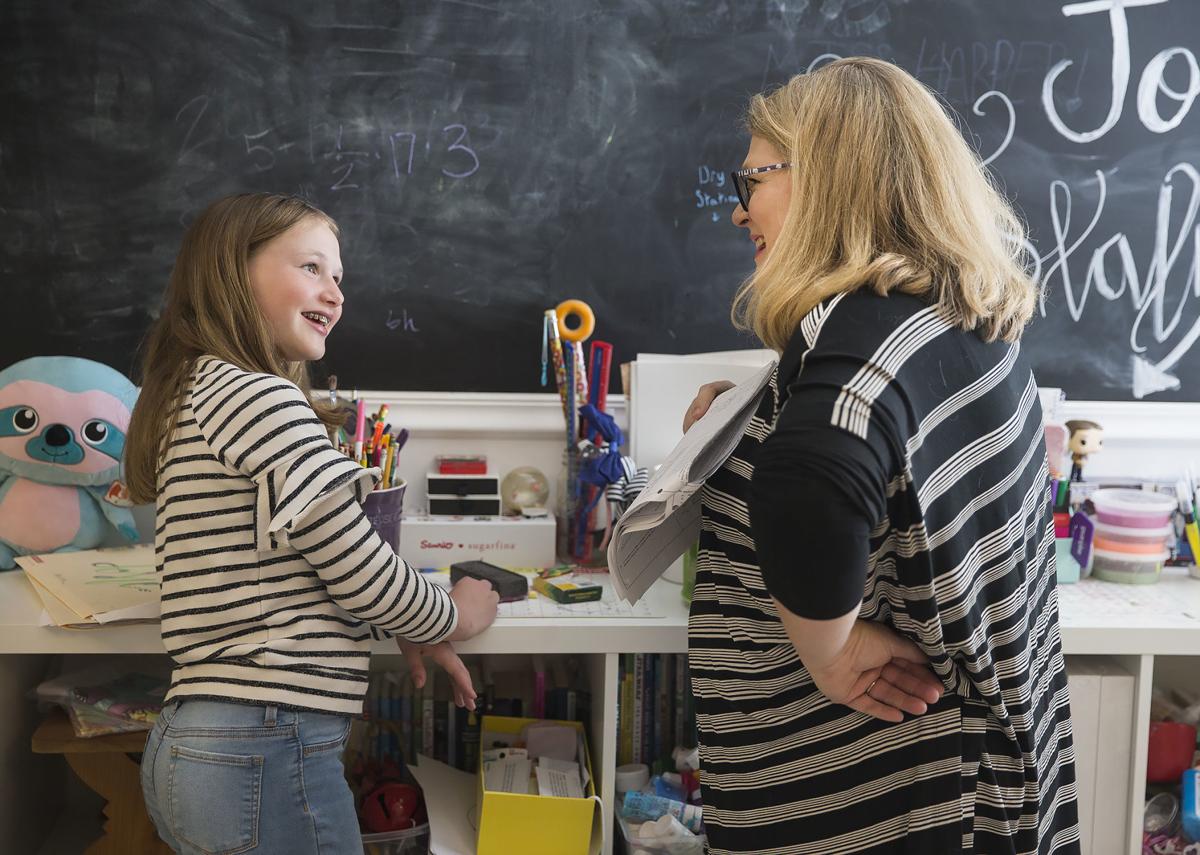 Elizabeth LeDoux goes over a math lesson with her daughter Josie at their Fredericksburg home.She began home schooling Josie after Walker-Grant Middle School closed due to the coronavirus. 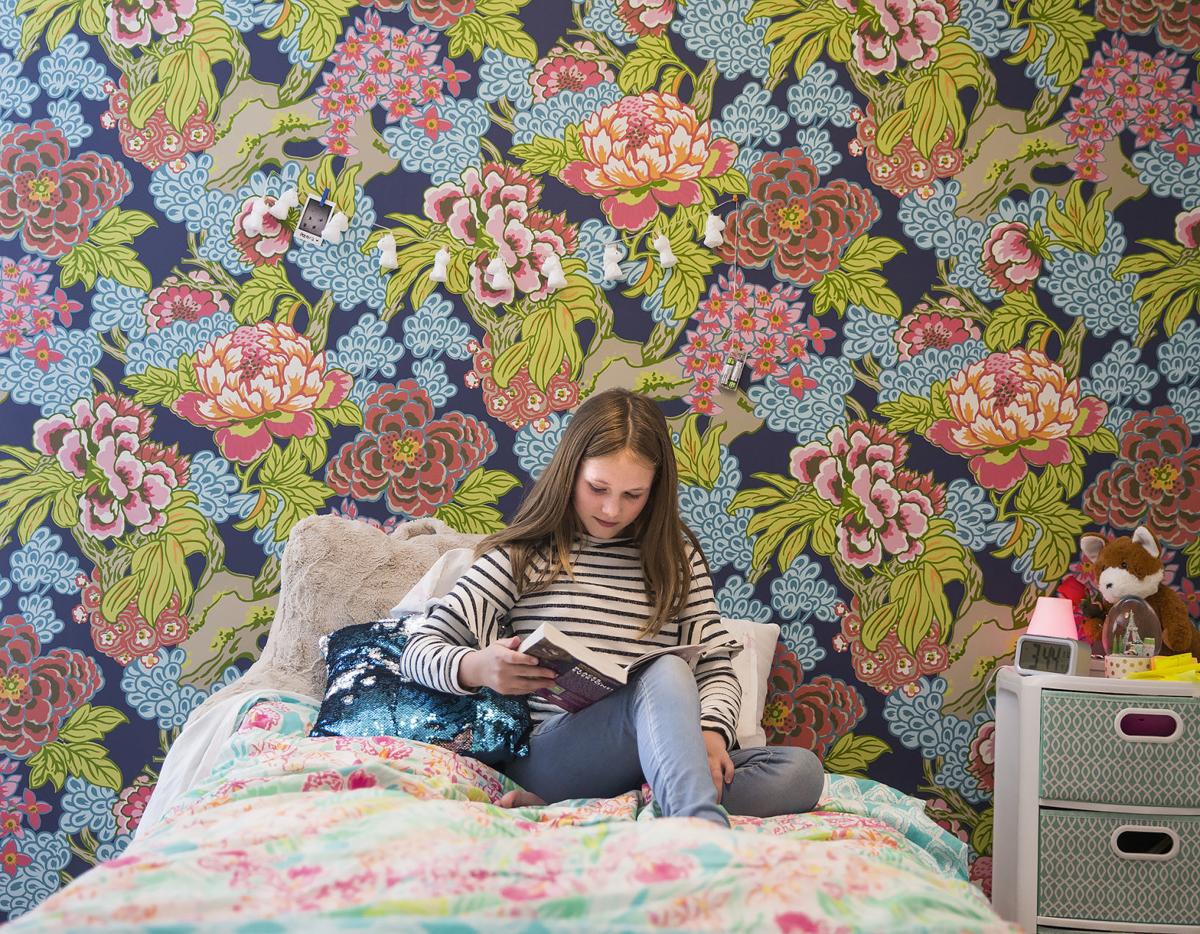 Reading is a big part of the homeschool curriculum LeDoux set for 11-year-old daughter Josie after Walker-Grant Middle School closed. 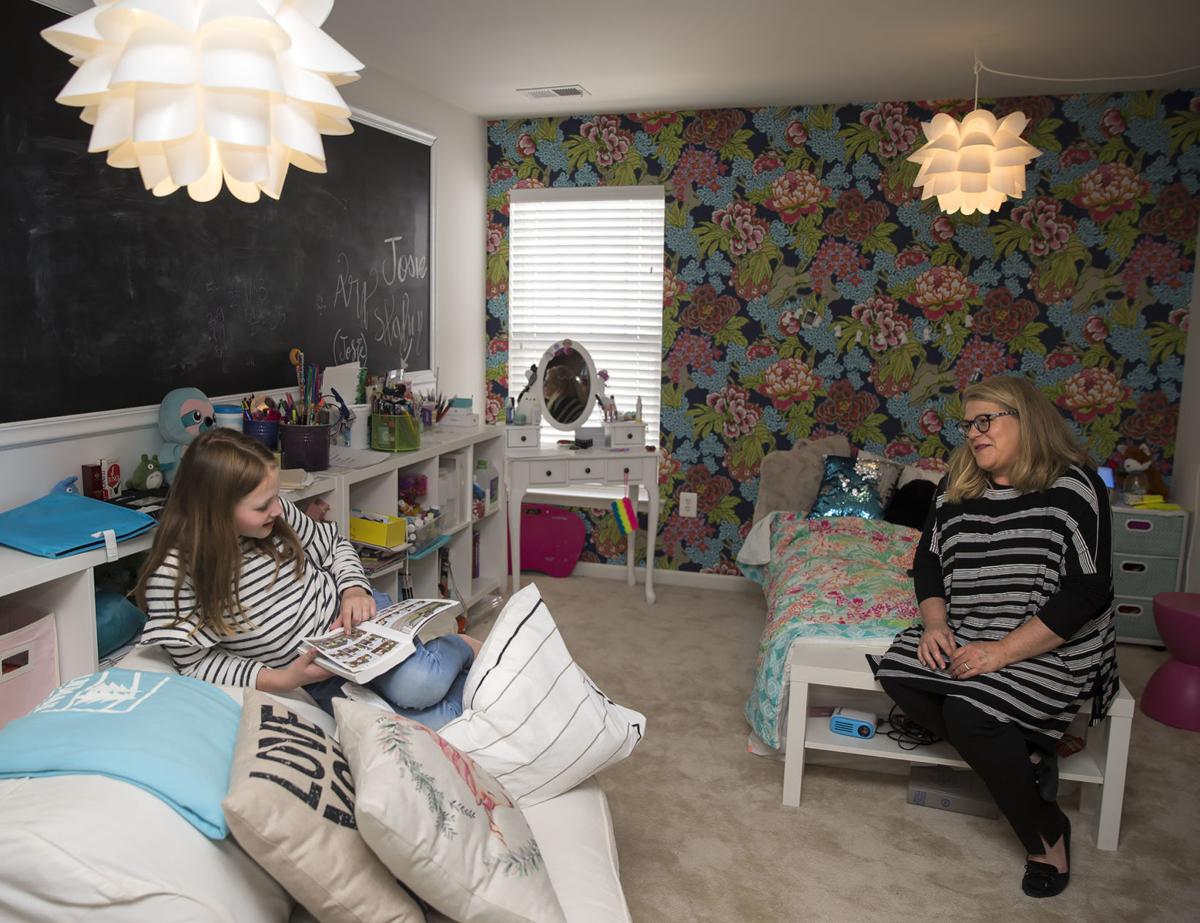 Elizabeth LeDoux worked out a study schedule with daughter Josie, but she describes what they are doing as more ‘crisis-schooling’ than homeschooling. 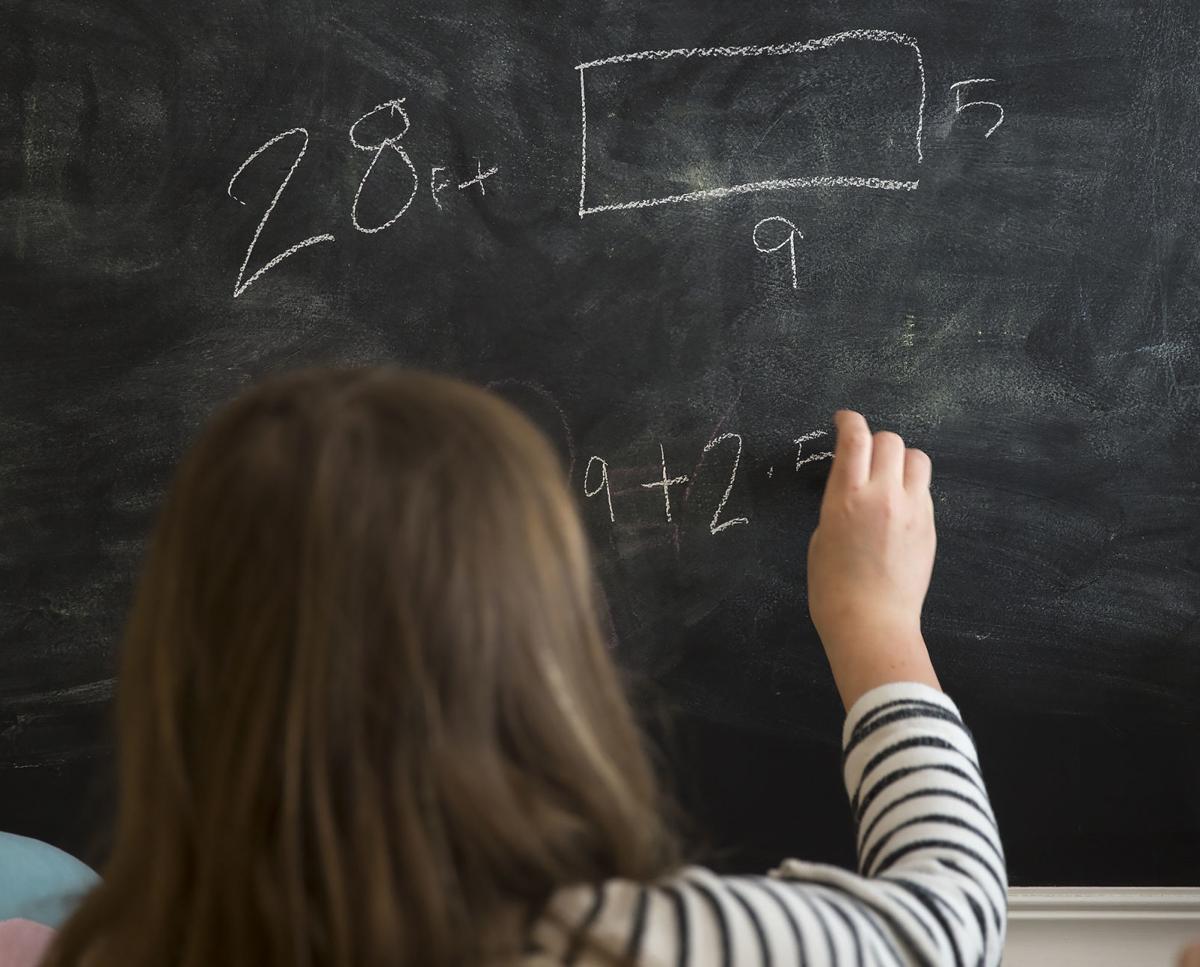 Josie works math problems at her home. Her mom wants to hire a math tutor to help with her lessons.

Elizabeth LeDoux goes over a math lesson with her daughter Josie at their Fredericksburg home.She began home schooling Josie after Walker-Grant Middle School closed due to the coronavirus.

Reading is a big part of the homeschool curriculum LeDoux set for 11-year-old daughter Josie after Walker-Grant Middle School closed.

Elizabeth LeDoux worked out a study schedule with daughter Josie, but she describes what they are doing as more ‘crisis-schooling’ than homeschooling.

Josie works math problems at her home. Her mom wants to hire a math tutor to help with her lessons.

At the Bartons’ house in Stafford County, there are two workstations at the kitchen island for mom Emily and dad Ricardo.

In the adjoining breakfast room, there are four little desks at which their three children do their elementary schoolwork.

In the middle of the room is another table for art projects, and off to the side is a bigger folding table where either of the adult Bartons can work with a child who needs one-on-one instruction or assistance.

Since March 12, when Virginia Gov. Ralph Northam closed all schools in an effort to slow the spread of the coronavirus, many local families have seen their homes transformed into offices and schools as well as living spaces, and many local moms and dads have added “teacher” to the roles they play each day.

As of March 31, all states except for Maine, Tennessee, Iowa and Nebraska—where closures vary by school district—have ordered statewide school closures that lasted at least through the end of the month. Virginia is one of 10 states that have closed public schools for the rest of the academic year or until further notice.

The closures have impacted at least 124,000 public and private schools and at least 55.1 million students, according to the publication Education Week.

Last week, the U.S. Department of Education approved Virginia’s application to cancel the federally mandated Standards of Learning tests in reading, science and math that are usually administered in the spring. Virginia’s assessment system also includes tests in writing, social studies and history that are not required by federal law.

According to the Virginia Department of Education, “VDOE is exploring options for canceling the administration of state-required SOL tests during the reconvened session of the General Assembly in April.”

Even with this relaxation of testing requirements, parents are still worried about the effects of school closures.

A survey conducted by the testing company Kaplan found that 62 percent of parents are concerned that school closures will cause their child to fall behind academically and that less than half of parents—48 percent—are confident in their ability to manage their child’s learning at home.

And according to a survey of 1,700 students conducted by the online homework help platform Brainly, 40 percent of students worry their grades will be impacted by school closures, and 43 percent report having trouble staying focused during online instruction.

All local school divisions have made curricula available in both print and digital forms. Private schools, and some public school teachers, are holding online classes through platforms such as Zoom and Google Hangouts.

According to Virginia Farm Bureau, 26 percent of rural Americans lack access to broadband internet, compared with only 1 percent of urban Americans.

“We are seeing state and nationwide closures of schools and universities. For those in areas with broadband access, that means moving classroom instruction, coursework and educational resources online. For those in rural areas without connectivity, these online opportunities are not available,” said Ben Rowe, national affairs coordinator for the Virginia Farm Bureau Federation, which is pushing for passage of a federal bill to improve broadband coverage.

Crystal Westrick, a Spotsylvania single mom of four, said she had to buy a laptop at Walmart for her elementary school-aged daughters to use for online learning. The girls had Amazon Fire tablets, which don’t support the Google Classroom platform their school has used, or the online reading and math curriculum Westrick signed them up for.

Westrick, who works as a cleaner at Wilderness Presidential Resorts, said she spent about $270 for the laptop, printer and paper. The money came from her tax refund, which is her savings for the year.

Westrick works every day except for Wednesday and Saturday. Since school closed, her mother comes to her house to watch the children when she works. She said her mother can’t help the girls with their school work because she doesn’t see well, so they do most of their work when Westrick comes home from her job at 3:30 p.m.

“But it’s not easy, because I have a 2-year-old who doesn’t understand that we need to do schoolwork, so she’s fussy and throwing stuff on the floor,” Westrick said. “I give her a piece of paper and a crayon, but the crayon goes on the walls. All my walls are colored at this point.”

Westrick tries to spend more time on schoolwork with her daughters on her off days, but said it’s hard to transition from mom to teacher.

“They don’t listen to me the way they’re going to listen to a teacher,” she said.

Westrick said being a single mom was hard enough before the coronavirus outbreak.

“It is impossible for me at this point to give every one of them the attention they probably need,” she said. “It’s not a possibility. We’re just doing what we can do. And praying for the best.”

For some parents who work part time, the transition to homeschooling has been easier.

Elizabeth LeDoux of Fredericksburg said she worries about her sixth-grade daughter falling behind, especially in math. LeDoux said she and her daughter, Josie, created a schedule on a white board to make sure she covers all the same subjects she would in a regular school day.

LeDoux said she wants to hire a math tutor and that her daughter is getting a daily French lesson from her mother and continuing with her private clarinet lessons. But she said she’s also allowing her daughter “as much outdoor friend time as they can figure out.”

“I would be all over every single detail [of Josie’s schooling], but I am working hard to let her own this and drive it,” LeDoux said. “I also am trying to remember that we’re not all homeschoolers. We’re all ‘crisis-schoolers.’ We have to make this up in our own way.”

Emily Tosh of Spotsylvania said she worked with friends who have been homeschooling for years to come up with a way to organize the day for her two children, who attend Brock Road Elementary.

“We decided not to try to set the day up exactly the same way as school, because I don’t think that’s necessary and certainly not doable for most people,” Tosh said.

Instead, they focus on five categories—reading aloud as a family, nature exploration or outdoor play, math and language arts workbook activities, science, and independent reading.

Tosh said she and the kids spend four or five hours a day in “school.” She said she feels she will be able to continue the routine through what would be the end of the school year and that she has enjoyed it, but realizes that others might not find it as easy.

“I have a background in education, even though it’s been a long time since I’ve taught,” she said. “I’ve subbed in the schools and volunteered, so I knew a little bit about what was going on. But I realize that I’m in a situation where I’m able to do it and enjoy it.”

Tosh said “homeschooling” can be as simple as “just reading to [your kids] and encouraging them to read.”

“That is the No. 1 thing I think any parent could do to make sure they don’t fall behind,” she said.

Jen Schaffer of Fredericksburg said she agrees that “homeschooling” isn’t the best term for what is happening now.

“This is not homeschooling, what we’re doing,” Schaffer said. “This is isolation-schooling.”

“We need to take it down to the basics,” she continued. “Ask the kids what feels good for them. Recognize that they’re sad and stressed already.

“We all just have to take a deep breath and do one day at a time,” she added.

The Facebook group FredParent At Home Together Support Group has resources for parents schooling at home.

lol.....I think teacher appreciation ratings is about to skyrocket