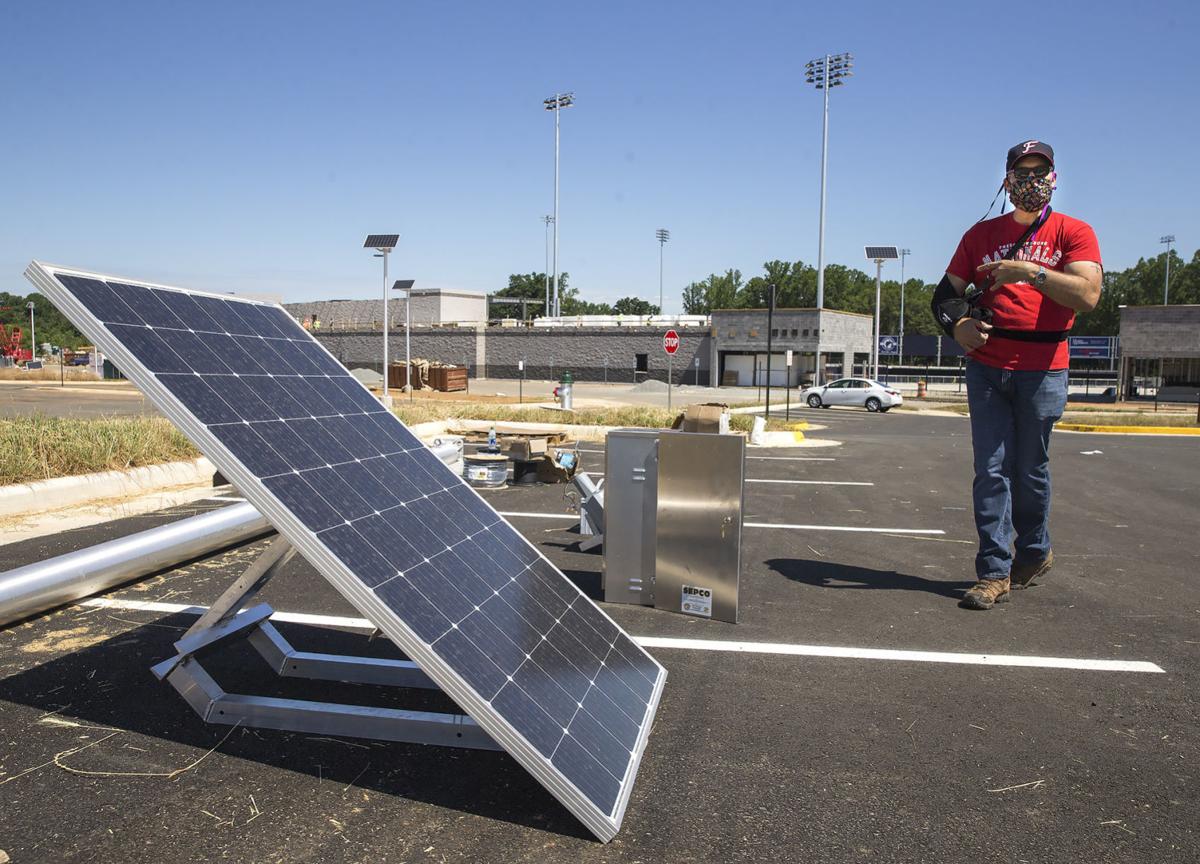 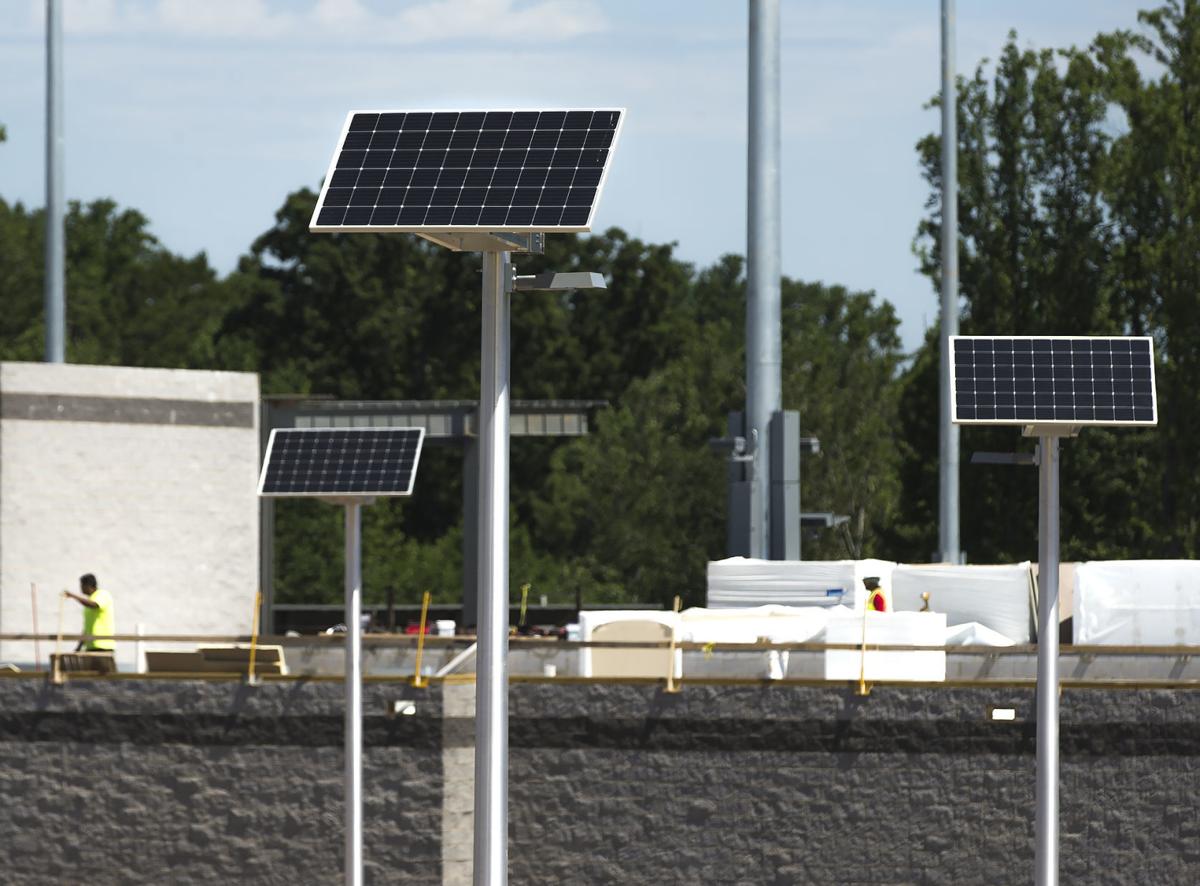 Solar panels can be seen throughout the parking lot of the Fredericksburg Nationals parking lot. Eventually, the complex will be fully powered by solar energy.

Fredericksburg Nationals general manager Nick Hall leads a tour of the team’s new ballpark. The team will hold an open house this Saturday and Sunday.

Solar panels can be seen throughout the parking lot of the Fredericksburg Nationals parking lot. Eventually, the complex will be fully powered by solar energy.

Fredericksburg Nationals general manager Nick Hall leads a tour of the team’s new ballpark. The team will hold an open house this Saturday and Sunday.

Solar-powered LED lights atop 30 poles will illuminate the parking lot when the Fredericksburg Nationals open their new $35 million stadium in Celebrate Virginia South.

Each pole will have a 300-watt solar panel and a metal cabinet containing two batteries that can store enough electricity to power the lights for up to five days if clouds obscure the sun. The batteries have a life expectancy of seven years, and can be recycled, according to stadium manager Peter Kirk.

“We’re hoping the technology will get better over time,” he told a group of about 20 people last Saturday morning.

The group included members of the Fredericksburg Clean & Green Commission, Fossil Free Fredericksburg, Rappahannock Climate Mobilization, Keep Virginia Beautiful and the Boy Scouts as well as students interested in technology and clean energy. They were there to learn what steps the Silber family, which owns the Fredericksburg Nationals, is taking so it can pursue LEED certification for the stadium.

They also got a preview of the stadium tour that the public will get during a free open house from 11 a.m. to 5 p.m. this Saturday and Sunday. The tours will be given in groups of 10 on a first-come, first-served basis, and merchandise and concessions will be sold at the end.

Kirk said members of the Silber family wanted to build their own stadium for 20 years. When they got the green light to move the team from Prince William County to Fredericksburg, they began meeting with the city’s Clean & Green Commission to brainstorm what the new facility could be like. The commission helped the family realize how it could become a leader in clean energy and sustainability, Kirk said.

One suggestion was to install solar-powered lights in the parking lot, but that seemed out of the Silbers’ price range until they contacted the Solar Power Electric Co., or SEPCO, in Stuart, Fla. They worked out a deal to have the lights shipped unassembled to save money.

“They sold us the components,” Kirk said “It’s like IKEA. We have to put them together.”

On June 13, he stood in the parking lot with the parts for one of the lights to talk about how they’ll work. Each pole will be self-contained, although technology may reach the point where they can be connected to Dominion Energy’s power grid. A sensor on each unit will turn all the lights on at dusk, but the stadium can adjust the lights for nights when there are no events at the stadium.

Kirk said that the parking lot lights cost around $225,000, and the Silbers were able to get a tax credit for a portion of their investment. He hasn’t had time yet to determine how long it will take for the lighting system to pay for itself.

“Needless to say, it will save us money,” he said.

Robert Courtnage, who chairs the Clean & Green Commission, told the group that the Silbers and their staff were great to work with on this project, and he’d like to see clean energy used in other parts of the city, as well.

The Fredericksburg Expo & Conference Center, for example, has a roof that would accommodate solar panels, and he’d like to see them on the city’s school buildings. Not only are they better for the environment and save money on utilities, but they can provide training opportunities for people who want to work in the fast-growing solar industry.

The stadium, the playing field and the Mary Washington Healthcare-sponsored playground are largely complete, although construction is still underway on the buildings that will house such things as the box office and team gift shop. Solar panels will go on roofs, and an eco-friendly synthetic turf system has already been installed on the playing field.

Two Major League Baseball teams already have this type of turf system, but the Fredericksburg Nationals are the first minor league team to have one, Kirk said. It eliminates the need for irrigation and the use of fertilizers and other chemicals that could find their way into the area’s watershed. It’s also tough enough that an area youth soccer team could use it in the morning, and the FredNats could play on it that evening.

“I really love everything environmental, and never knew how solar worked. I wanted to come out and see what it looked like,” said Ana Heller, a rising senior at James Monroe High School who volunteers with Fossil Free Fredericksburg. “It’s better than I expected. I’m really excited for the games to open. I’ll definitely come out.”