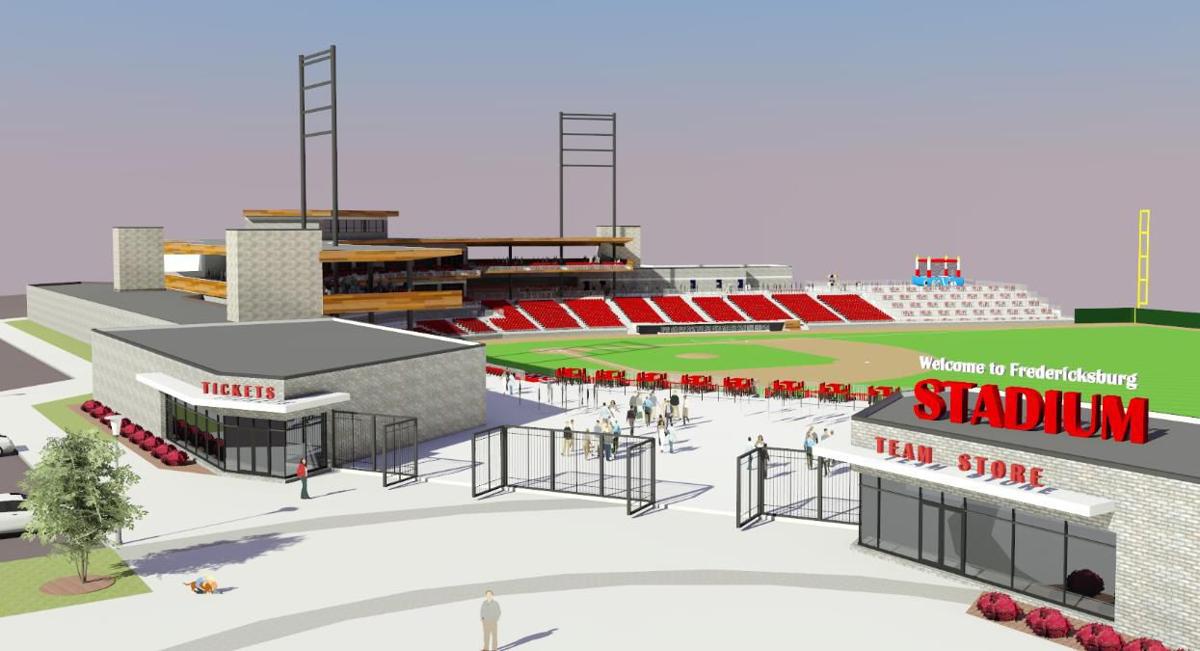 A rendering shows a 5,000-seat stadium that would host baseball games and other events. 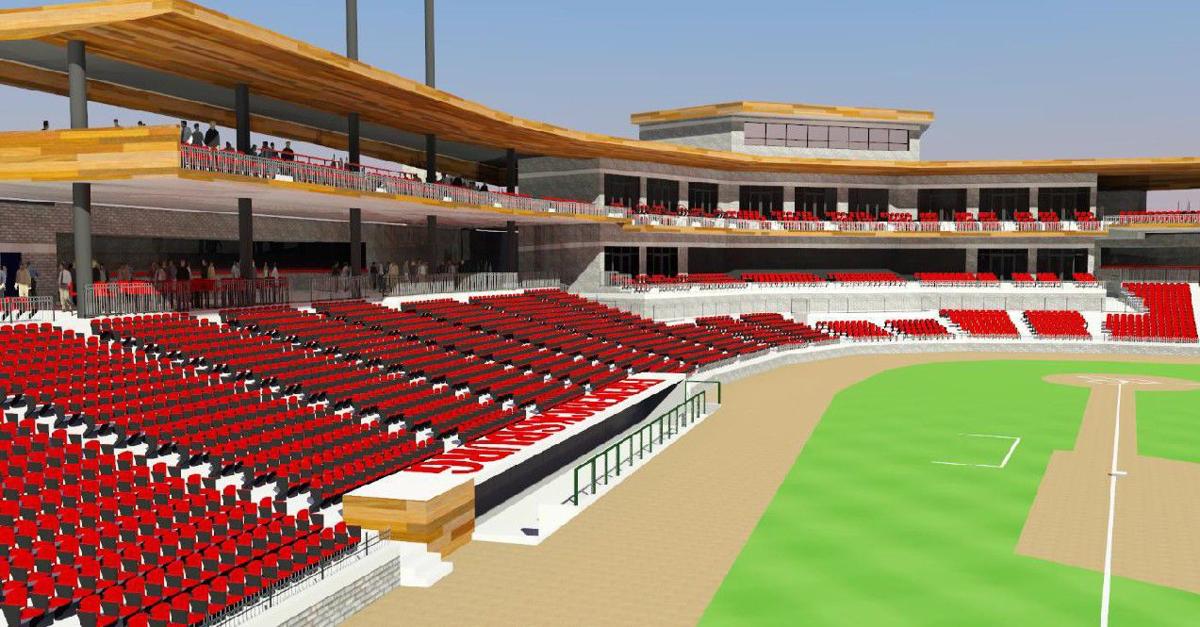 This rendering shows the stadium the Potomac Nationals want to build in Fredericksburg. 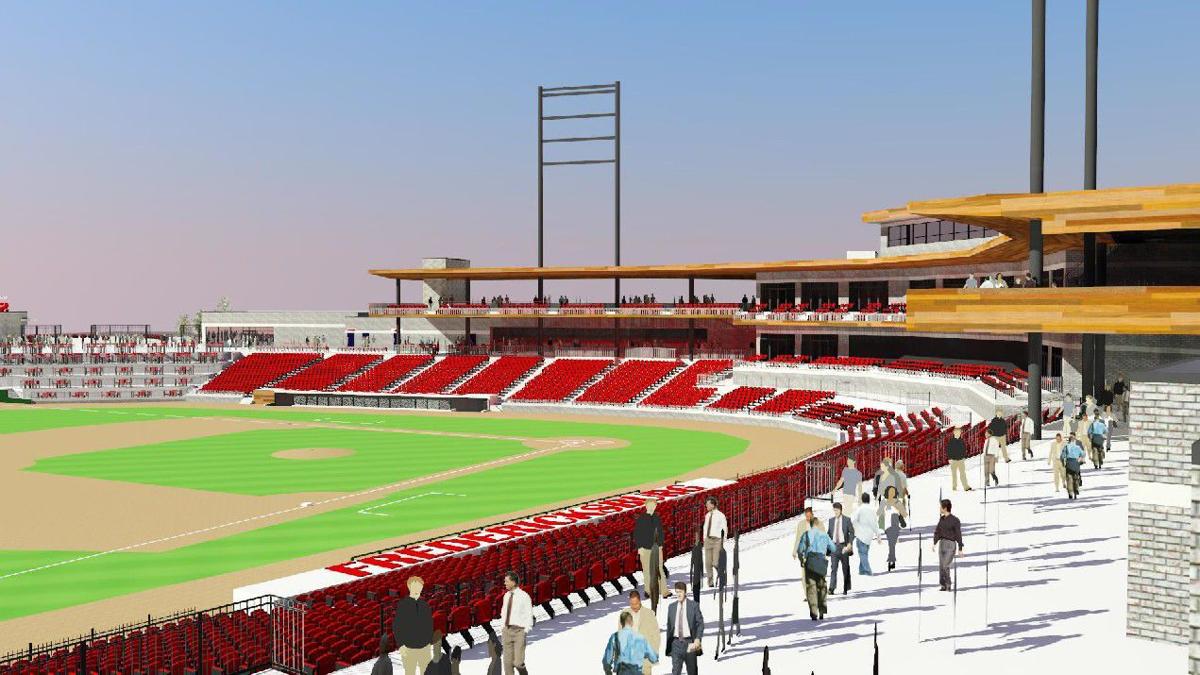 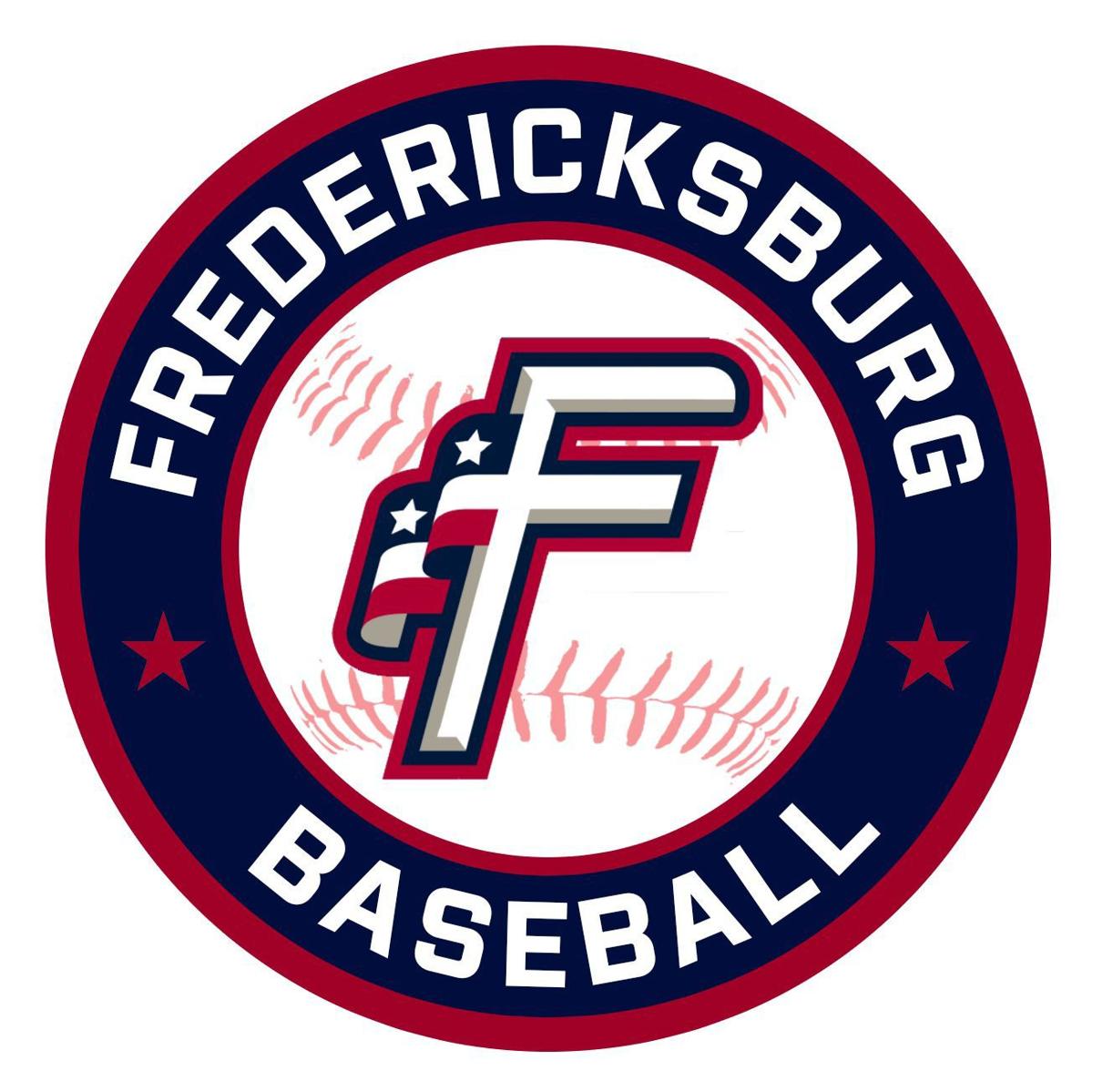 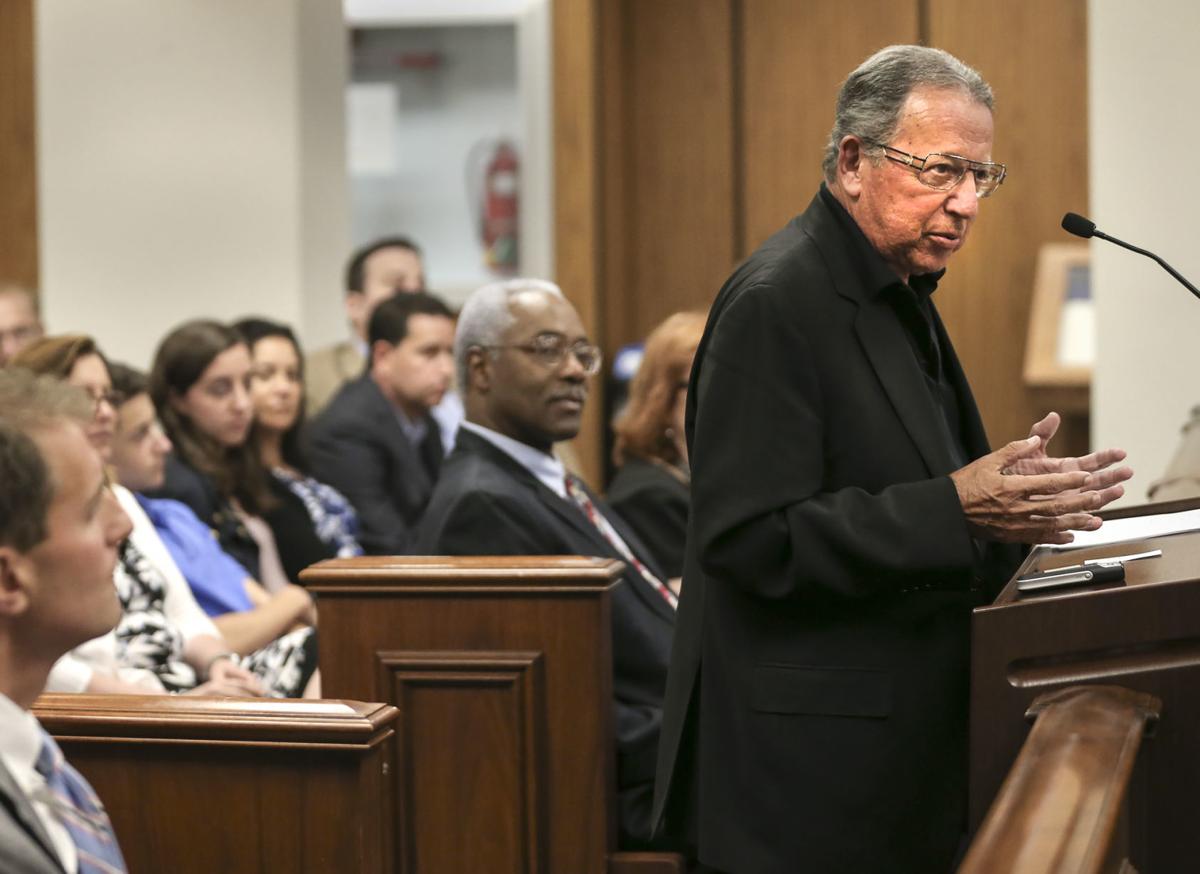 A rendering shows a 5,000-seat stadium that would host baseball games and other events.

This rendering shows the stadium the Potomac Nationals want to build in Fredericksburg.

Although Fredericksburg officials struck out the last time they tried to bring a professional baseball team to the city, they’re back at the plate to take another swing.

The City Council revealed Tuesday night that it has been in talks for about a year with the Silber family, who owns the Potomac Nationals—the Class A-Advanced minor league affiliate of the Washington Nationals—about relocating the team from Prince William County to Fredericksburg.

The talks have resulted in a nonbinding letter of intent between the city and the baseball club, in which the team would plan, design, finance and build a 5,000-seat stadium in Celebrate Virginia South—where Wegmans, the Fredericksburg Expo Center and three hotels are now located.

Officials said the site is different from the one that was the center of unsuccessful talks in 2013 to bring the Hagerstown Suns to Fredericksburg, but did not identify the exact location.

Negotiations with the Silber family have taken place through phone calls, in-person meetings and several closed sessions with the City Council, City Manager Tim Baroody said. The council will vote on approving the letter of intent on July 10.

“We think we’ve got a great opportunity here,” Silber said. “This is an incredible location and a great community.”

The stadium is expected to cost $35 million. Under the agreement, the stadium will be privately financed by the baseball club and the city will not incur any debt.

“Unlike most stadium projects, this deal, as outlined in the [letter], will not be built by Fredericksburg,” Mayor Mary Katherine Greenlaw said in a news release issued by the city. “Instead, the baseball club will finance, build and maintain the stadium. The city will be able to use the multipurpose stadium for community events on non-baseball days for the next 30 years.”

Silber said that in privately funding the stadium, he risks losing the ball club.

“If we thought or felt this is something that wouldn’t work, I guarantee you, we wouldn’t do it, because we wouldn’t risk the equity in the ball club,” he said.

The city would be considered an “anchor tenant” of the stadium in exchange for an annual payment to the club of $1.05 million for 30 years.

These projections come from an economic impact report on a possible stadium prepared for the city by consulting firm Brailsford and Dunlavey in 2013. They are based on an average attendance of 4,100 for the baseball games.

The Silver Cos., which owns the land where the stadium would be built, will contribute $100,000 annually to the project, according to the letter.

“We think that [city taxpayers] will not be affected at all,” Freehling said in an interview.

“We’re really excited about this,” Freehling continued. “Besides the economic benefit, there’s a quality-of-life, intangible benefit that comes from having a baseball team in town.”

The name of the Carolina League team is yet to be determined, he said, but “Fredericksburg” will be part of it.

The Celebrate Virginia After Hours concert series would move to the new stadium. Other potential non-baseball uses include holiday activities such as a skating rink and a holiday lights display as well as food festivals, music festivals, sports tournaments and corporate events.

According to the city’s press release, an average attendance of 4,100 would generate 1,367 vehicle trips. Celebrate Virginia South already has six-lane roads built to handle high traffic volumes and the After Hours concert series has attracted an audience of up to 7,000, the press release states.

If the council approves the letter of intent, it will trigger a 120-day study period for both the baseball club and the city. A public hearing will be scheduled during that time.

During the study period, the baseball club will be prohibited from negotiating a deal with any other localities. At the end of the study period, in November, the city would sign a definitive agreement with the Silber family. If approved, the first season in the new stadium would begin in April 2020.

The proposed deal is a marriage between a team that has been looking for a new stadium with a community that has tried to lure a baseball team since at least 2012.

The Potomac Nationals have been seeking a new location for several years, because the 34-year-old Pfitzner Stadium at the Prince William County government complex lacks many of the amenities of modern-day baseball facilities. But a preliminary deal to construct a new stadium at Stonebridge at Potomac Town Center off Interstate 95 fell apart last summer because of concerns by some Prince William supervisors over the risk of issuing bonds to help the team build the facility.

In Fredericksburg, the proposal fell apart when the partnership between the Suns and Diamond Nation, a New Jersey-based company that sponsors baseball tournaments, disintegrated.

Diamond Nation does not own the site under discussion, Freehling said. The site is owned by an affiliate of the Silver Cos.

Freehling said the Potomac Nationals deal is better than the one considered with the Suns because it does not require the city to own and build a parking facility and it allows the city to use the stadium and generate revenue on non-baseball days.

He added that the Potomac Nationals are a level higher than the Hagerstown Suns and that, if located in Fredericksburg, there would be no other team within 50 miles to compete with for attendance.

In his remarks Tuesday, Silber said he has already engaged an architect and a general contractor for the project. He discussed his plans for the stadium, which include a splash pad and an all-you-can-eat crab shack among other entertainment and amenities.

“Our job is to provide affordable family entertainment in a physically safe environment,” Silber said.

Council member Chuck Frye spoke of the number of lower-income families in the city and said the stadium will be a place where people who can’t afford to attend Washington Nationals games can enjoy live baseball.

“You never know what 10-year-old or 8-year-old kid is out there with dreams of the pros who would love this,” Frye said. “And a dream is sometimes good enough to live on.

“And you know, this is the kind of thing that might make us officially a city,” he said.

The non-binding letter of intent and other information about the project are available at FredericksburgBaseball.com.

BASEBALL IN THE 'BURG TIMELINE

1866: First recreational baseball club is organized in June 1866 and called the Fredericksburg Base Ball Club. A field is developed on the grounds of Kenmore. The league expands in the 1870s to include playing games against other localities.

1908: Fredericksburg gets its first professional baseball team, the Fredericksburg White Sox. Home games during the first season are played at the Athletic Grounds (located near what is today Riverside Drive and Fall Hill Avenue on the west side of U.S. 1). The team's first season record: 42–18. Due to the success and popularity of the team, the Hanover Ball Park Company is founded to build a new baseball park downtown, off Hanover Street near the intersection with Kenmore Avenue on what is today Mill Race Commons. Hanover Park opens Sept. 21, 1908 and is used for other sports as well, including ice skating in the winter. Concerts also are held there.

1923: Hanover Park has become outdated. On March 28, 1923, a charter is granted for the new Gouldman Baseball Park, between Washington Avenue on the west, Prince Edward Street on the east, Pitt Street on the south and the canal on the north. Winchester Street terminated at the park boundaries (today it extends to the canal). The field is in use during the 1923 season. The Sox continue to play at Gouldman Park until the team disbands in the 1930s.

2012: Rappahannock Baseball Initiative-Virginia, a group of staff and elected officials from the Fredericksburg area, works to attract an independent minor league team to the region. Paul Akers, then-editorial page editor of The Free Lance–Star, is credited as being instrumental in the push for baseball. He had written a series of columns advocating for a minor league team as a way to unite the community.

2013: The owner of the Single-A Hagerstown Suns, a minor league affiliate of the Washington Nationals, seeks a new stadium and says the team could begin playing in Fredericksburg as soon as the 2015 season if City Council agrees to issue as much as $30 million in bonds to finance construction of a publicly owned stadium off Interstate 95 in Celebrate Virginia South. After city residents speak out against a publicly financed stadium, a new plan emerges in August: The Suns would partner with New Jersey-based Diamond Nation to build a $29 million stadium and a five-field baseball/softball complex. The city would pay for an 1,800-space parking lot at a cost of about $10 million. In September, City Council approves a draft of the plan that includes more than $1 million per year in tax incentives for the stadium group.

2014: In August 2014, the partners seeking to build a baseball stadium announce they are short on funds and need help with the project. They later offer to return 3 percent of the gross revenue from the entire complex for the first decade of operations and 1.5 percent of the gross revenue thereafter to the city in exchange for $14 million in up-front funding. Near the end of September, Diamond Nation announces it would finance the entire cost of the project. By November, the deal between the Suns and Diamond Nation has fallen apart. The Suns then start negotiating a deal with Spotsylvania County that ultimately fizzles out in August 2015.

2017: In a July 2017 interview, Potomac Nationals owner Art Silber says he is open to moving the team to the Fredericksburg area. The team had been negotiating a deal for a new stadium in Prince William County, but those talks stalled.

June 26, 2018: City Council announces a non-binding agreement with the Potomac Nationals to bring the team to Fredericksburg. The club would build a 5,000-seat stadium in Celebrate Virginia and the city would pay $1.05 million a year to be an anchor tenant and use it for concerts and other events when no baseball games are scheduled.

July 10, 2018: Council will decide whether to approve the agreement.

DEAL AT A GLANCE

The Potomac Nationals are considering relocating to Fredericksburg. Details of the agreement between the city and the team include: