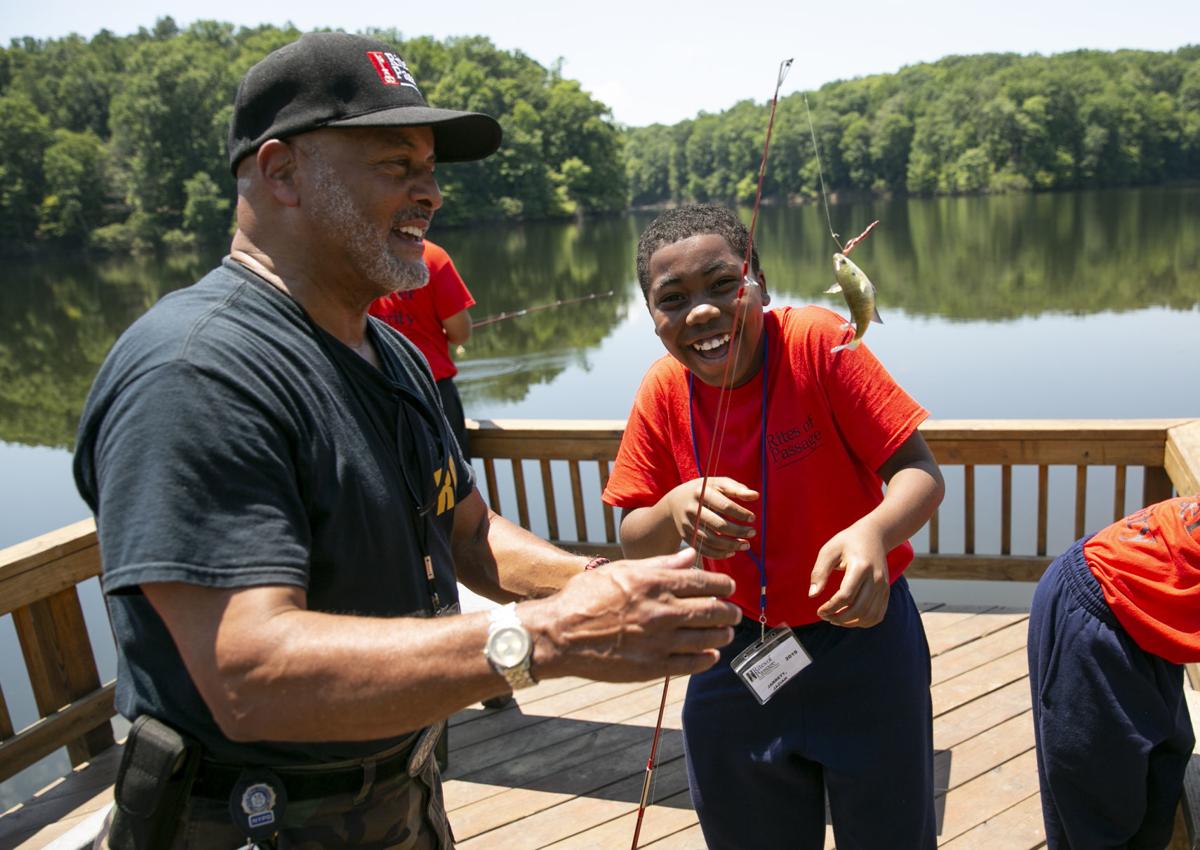 Jaziah Jarrett laughs as a fish he caught flips away from mentor Teddy Sampson at Motts Run Reservoir on Friday in Fredericksburg. The fishing excursion was part of the three-day Rites of Passage program, which is in its 11th year. 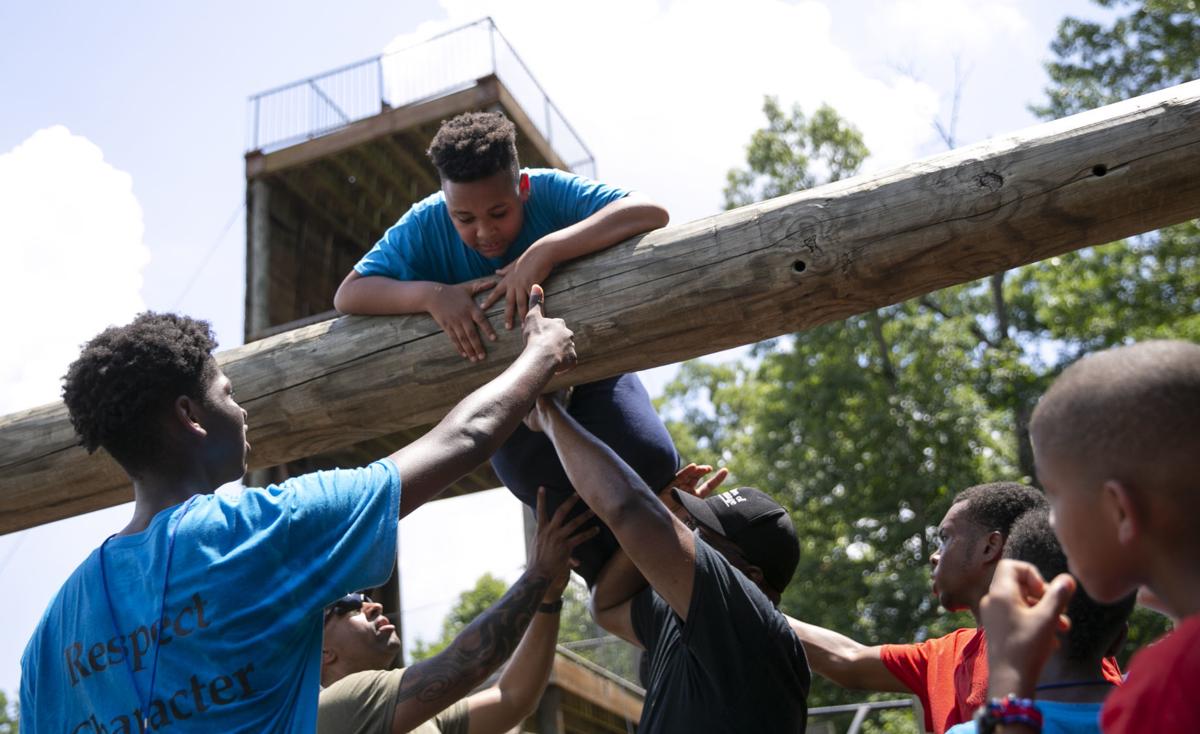 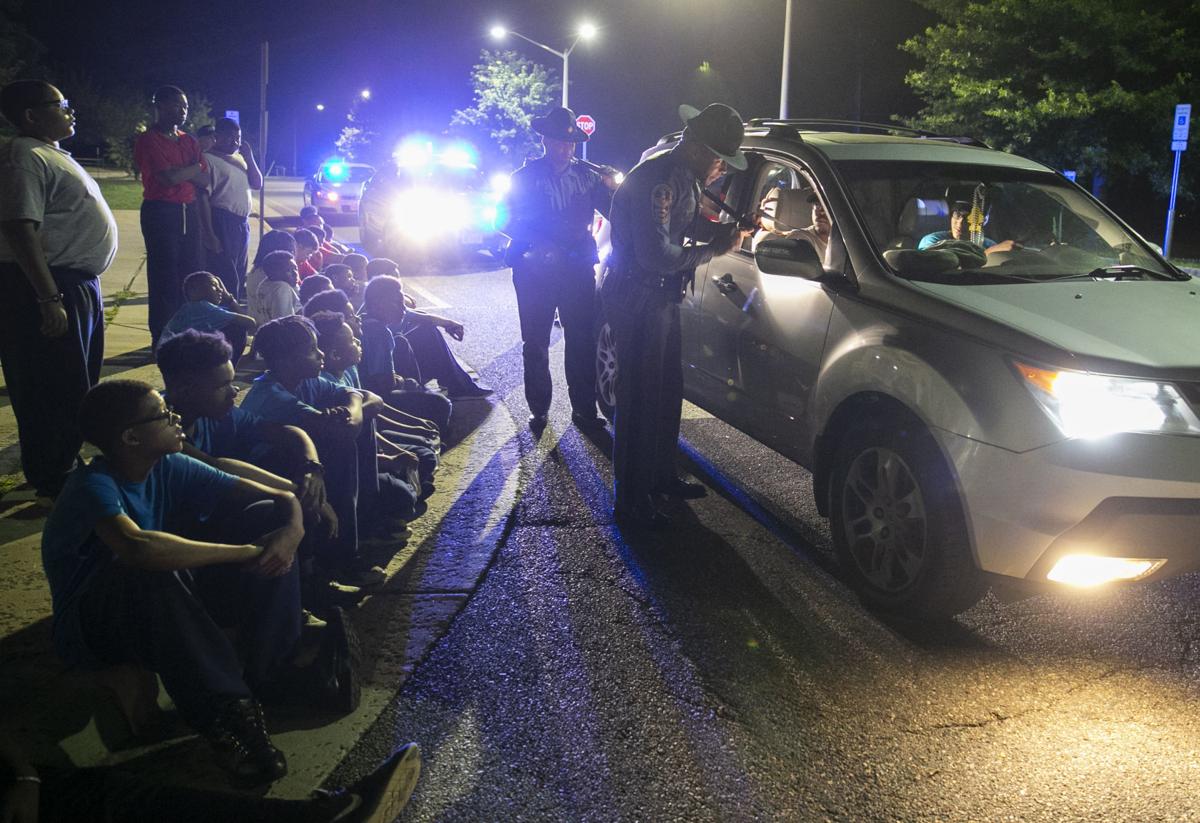 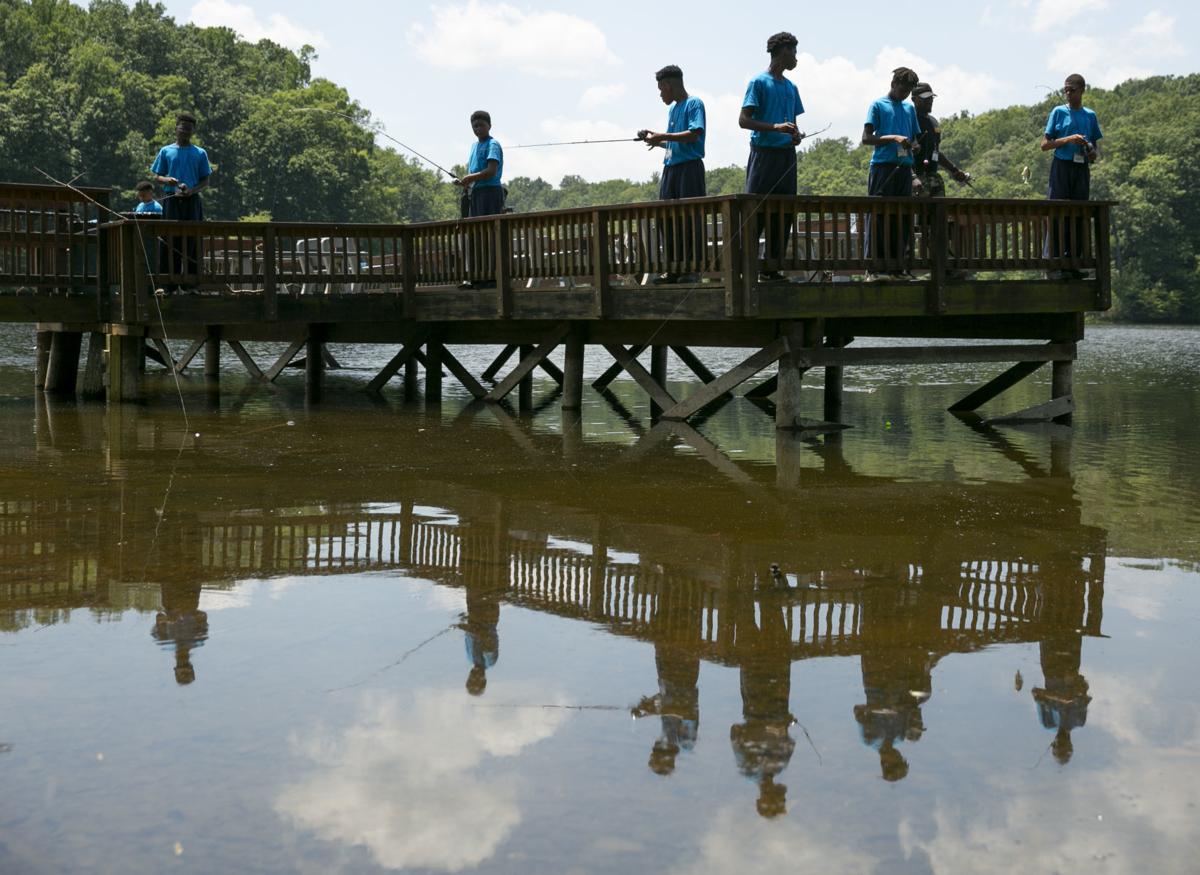 Participants in the Rites of Passage mentorship program fish at Motts Run Reservoir. The program’s schedule was packed with activities and challenges. 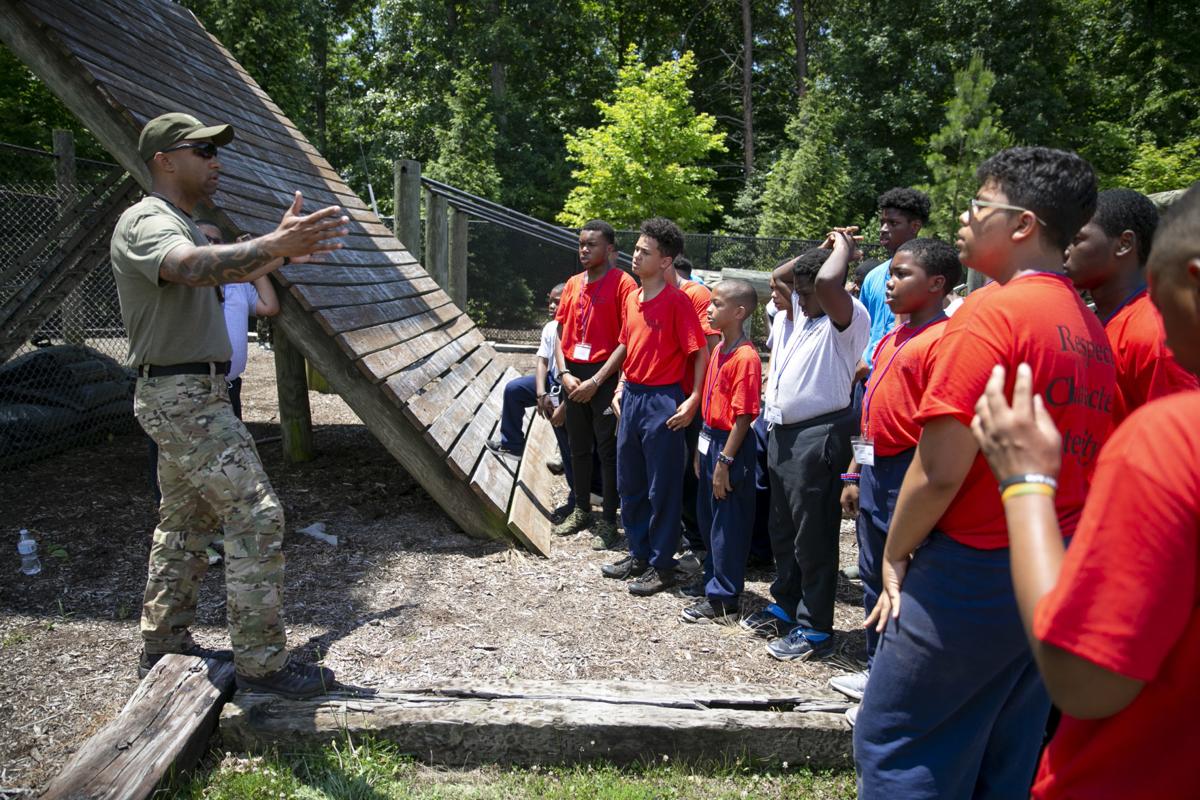 Fredericksburg police officer James Carr speaks to the boys before they tackle an obstacle course. 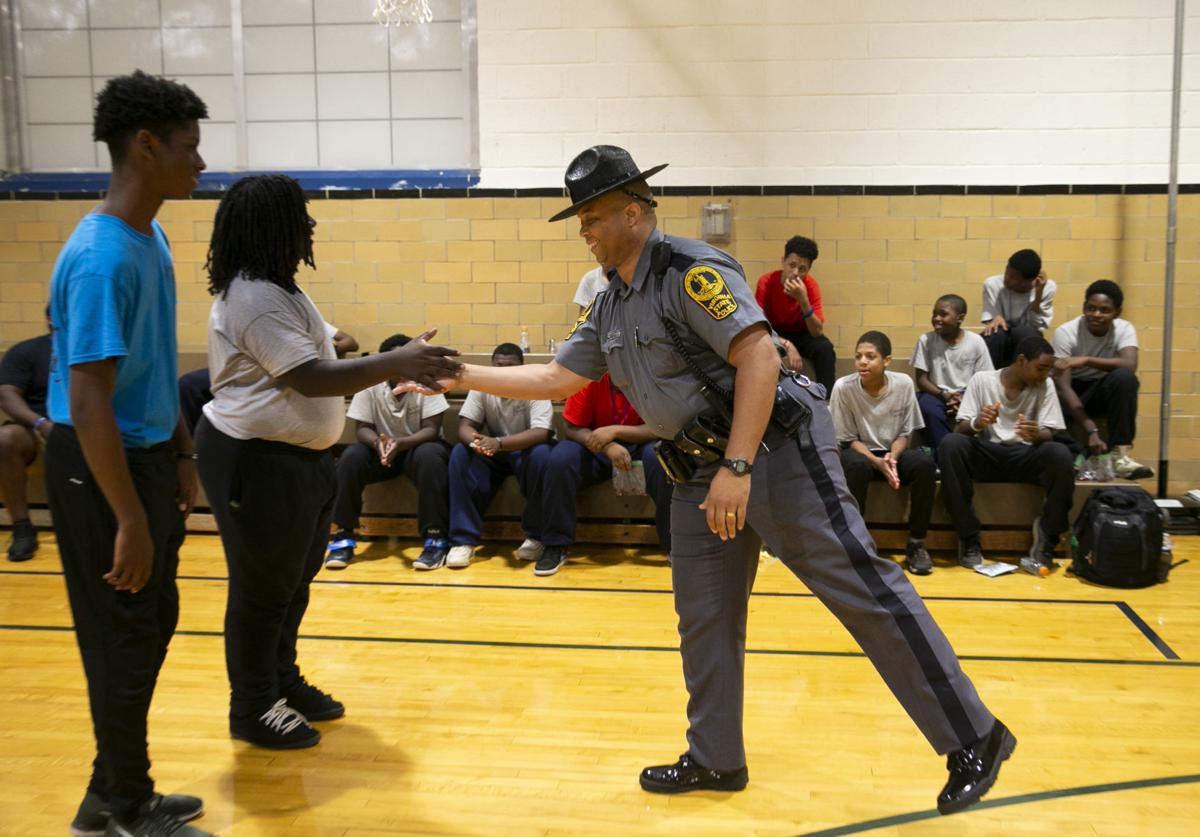 Jaziah Jarrett laughs as a fish he caught flips away from mentor Teddy Sampson at Motts Run Reservoir on Friday in Fredericksburg. The fishing excursion was part of the three-day Rites of Passage program, which is in its 11th year.

Participants in the Rites of Passage mentorship program fish at Motts Run Reservoir. The program’s schedule was packed with activities and challenges.

Fredericksburg police officer James Carr speaks to the boys before they tackle an obstacle course.

A group of 30 boys stood at the start of the obstacle course behind the Fredericksburg Police Department on the blisteringly hot Saturday afternoon, listening to Officer James Carr explain how to cross a log, jump onto another one, grasp it, spin to the underside then drop and land on their feet.

Most of the boys completed the obstacle with relative ease, but it proved challenging for a few.

“I can’t do it,” one boy said, eyeing the log he was supposed to walk across.

Lucas and others moved along as guides, shouting encouragement, as the boy made it.

“Yeah! You the man,” said Moe Petway, co-founder of the Rites of Passage program, in which black men mentor black boys, many of whom lack a father figure.

This is the 11th year for the Rites of Passage program.

The obstacle course was one of many adventures and challenges the boys took part in during the three-day program.

Richard Fortune, another co-founder of the program, said he wanted to start the program because he saw a “lack of graduation” of black boys becoming men. He cited the Bible and how in order to grow up, one has to put aside childish things.

The Spotsylvania County resident recalled a year when the program had 36 boys and 27 had no father in the home. That’s when he “realized we were needed in single-mom households.”

“Someone has to be responsible for our young black men,” he said, adding that they need nurturing at a young age.

Fortune said many of the boys don’t look happy when they arrive for the program. They can’t have cellphones, ear buds or other modern gadgets.

But things change as the boys make their way through the program, during which they work together and compete, while also gaining valuable mentoring from experienced and successful black men. Many of the mentors are retired from the military, and one is a retired New York City detective.

“At the end they are all one team,” Fortune said. The program “gives them a foundation of what they can do.”

They set up camp at John J. Wright Education & Cultural Center Museum in Spotsylvania on Thursday evening. The camp serves as their base for the three days.

Among the activities this year, the group visited the U.S. Marine Corps Museum in Triangle, went fishing and learned many of the basics that fathers often teach their sons.

Not all of the boys in the program lack a present father, including Fortune’s two sons.

Both of his sons have taken part in several of the programs, and Fortune noted how important it has been for them to be mentored by other black men.

On Saturday, before the group made its way to the police obstacle course, they went to Shannon Airport, where the boys got to take rides on planes.

One of the mentors told the group before they went on the rides that you never know when you’ll have to do something you’re afraid of doing.

Lucas, a Chancellor High School senior, said this year is the fifth time he’s taken part in the program.

“This has pretty much changed my life,” he said, adding that he has learned leadership skills, something he hopes to take with him to either college or the military after he graduates. “This is a good experience.”

“Getting on the plane right now—I’m afraid of heights,” he said. “But I gotta do it.”

Spotsylvania resident Karen Lewis said the program has been a really good experience for her two sons. This year is the third time they have taken part in the program.

“It’s awesome,” she said. “It teaches them to work together, teamwork, to respect others.”

The program “broadens their horizons,” she added. “It helps them to be focused, that at some point in life you’re going to have to work for what you want.”

One of the mentors, 22-year-old Shelton Eley, also took part in the program when he was younger.

The University of Maryland graduate, now a recruiter for the school’s football team, said he didn’t have a father in the home growing up. Instead, he relied on an uncle and grandfather, but still had a need for mentors.

“This gave me an opportunity to look up to them,” he said of his experience taking part in the program. “I just met a new family away from home.”

The program “gives them a boost in confidence,” he said of the boys. “When they get older they can refer to this.”

He stays in touch with friends he made in the program, even though he lives in Maryland, where he wants to start a similar program.

“A lot of kids need mentors,” he said

The Rites of Passage wrapped up with Virginia State Troopers joining the group at their camp.

Petway said the troopers were going to talk to the boys and try to connect, let them know “they are humans, too.”

He said a lot of the boys don’t have role models, and the program helps with that.

“We want the boys to become men,” he said.

Petway pointed out the motto of the program, printed on the T-shirts the boys wear: Respect, Character, Integrity.

“Character’s so important,” he said. “Nowadays it seems to be tossed aside.”