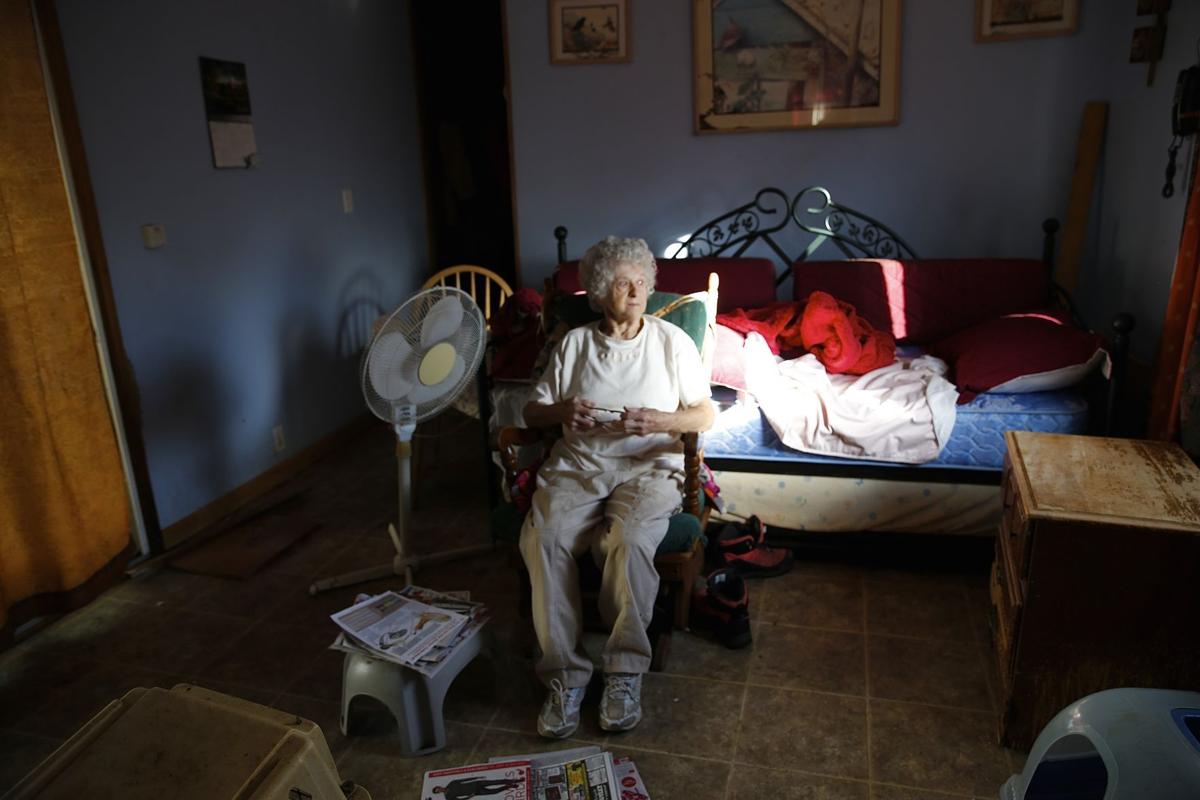 Sallie Carter, 90, says, ‘I’ll sleep in my car if have to,’ when talking about what might happen when she has to move. 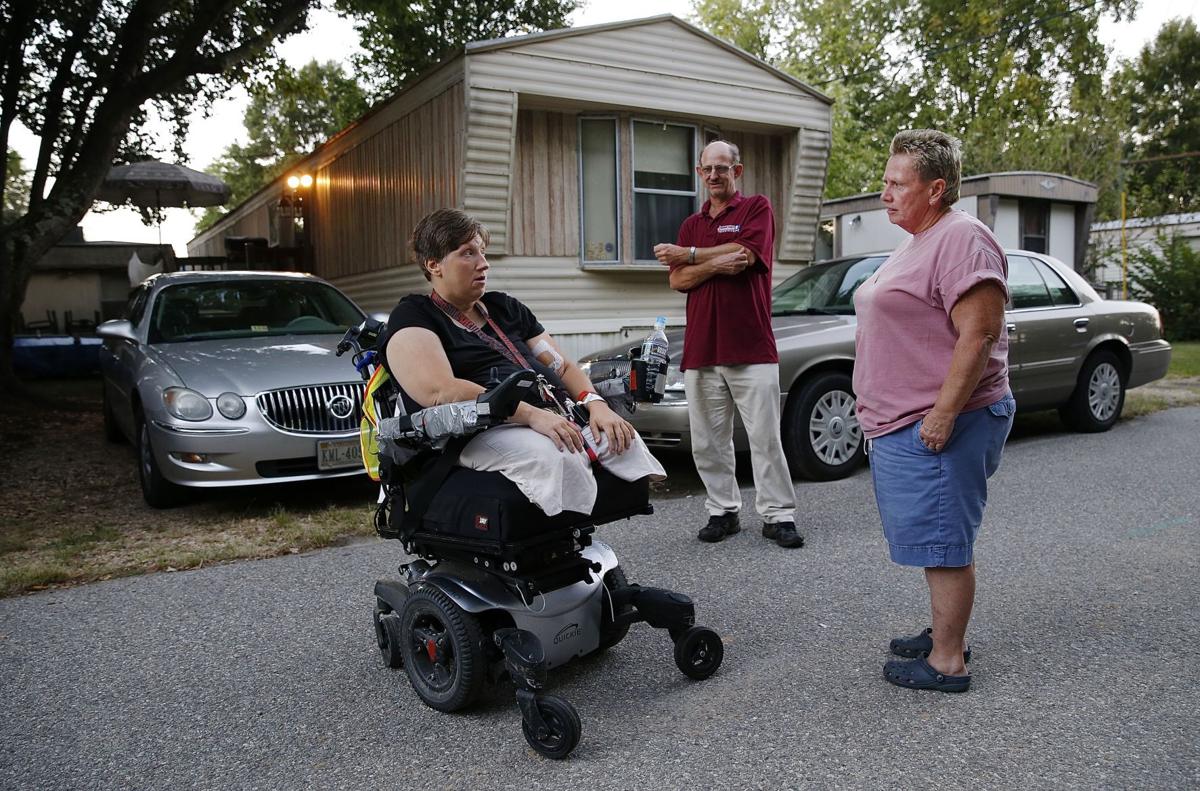 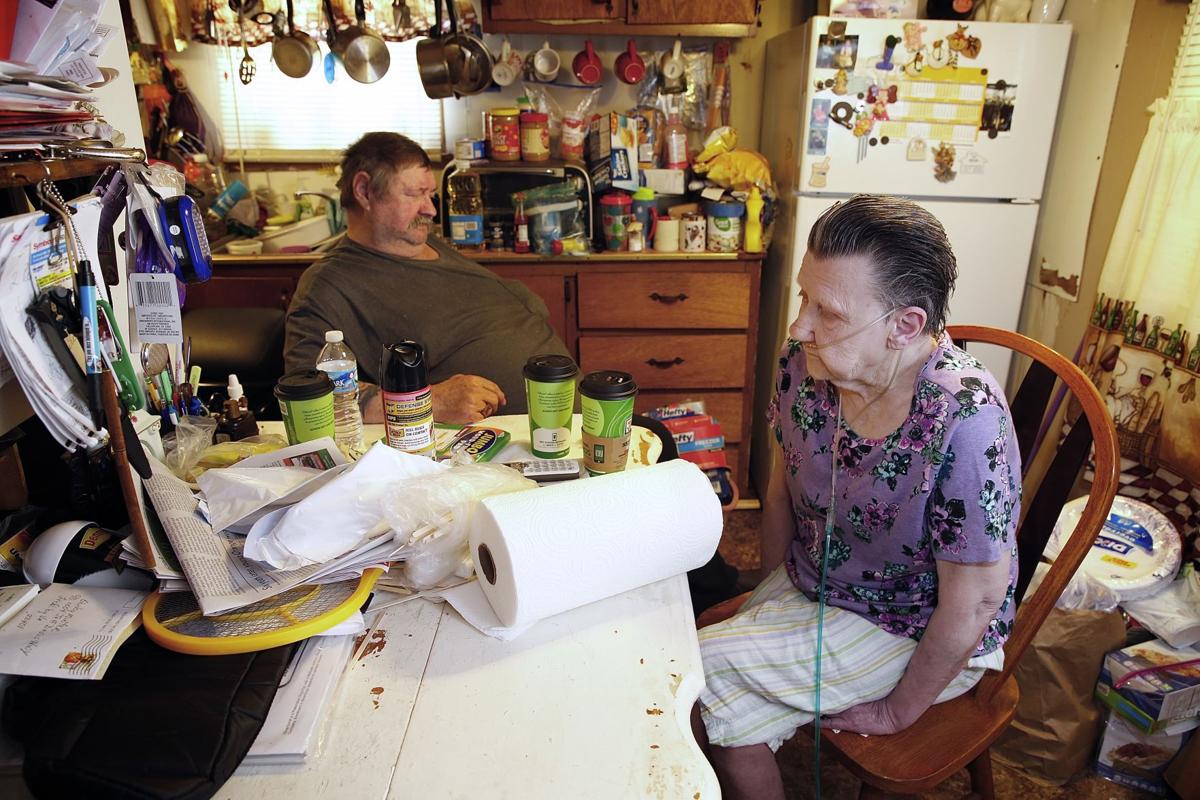 Willie and Shirley Minter are struggling to find new housing after getting notice that their lease may end. 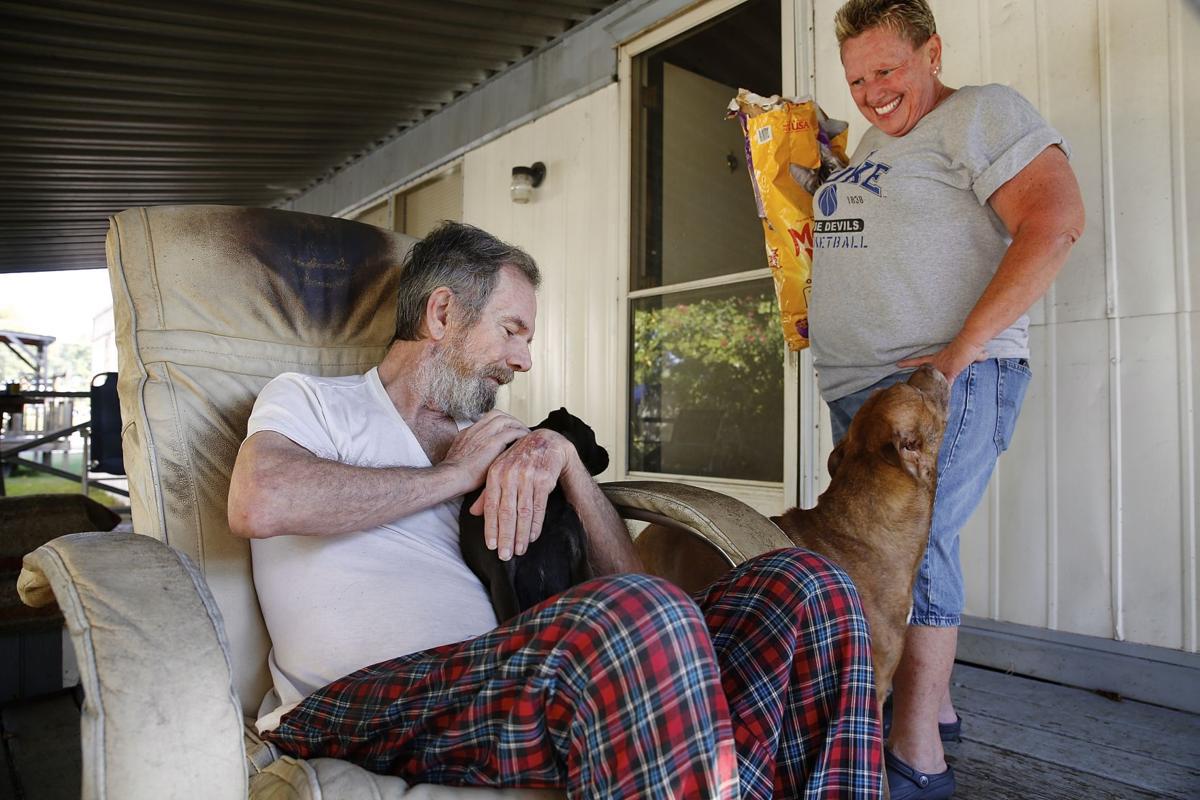 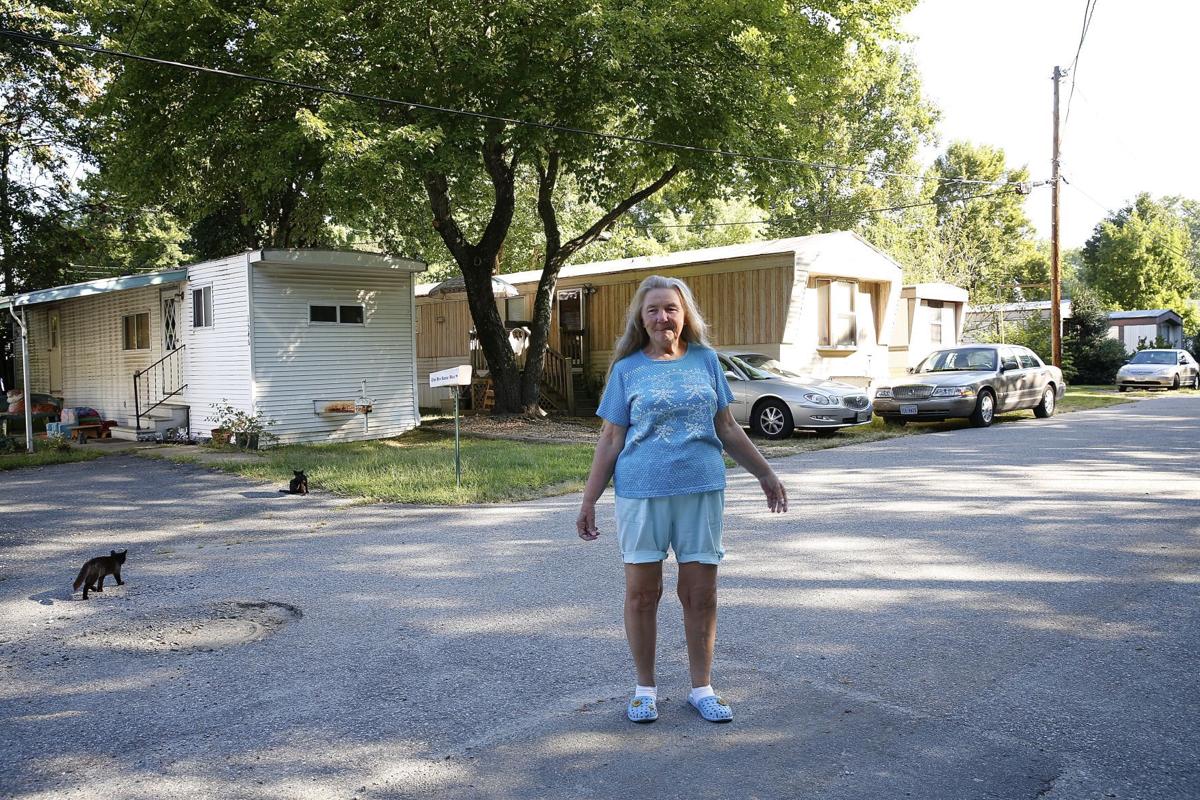 Sallie Carter, 90, says, ‘I’ll sleep in my car if have to,’ when talking about what might happen when she has to move.

Willie and Shirley Minter are struggling to find new housing after getting notice that their lease may end.

She can remember the names of everyone who passed through the park, the people who raised her after she lost her family.

She mentions them easily in conversation: Tom and Rose, his war bride who taught her bonsai; Mrs. Edwards, the fierce old lady who lived near the creek and chopped heads off snakes; Mrs. Davenport, who took her to church. It’s like their shadows walk with her along the narrow streets as she visits the residents who still still live there, people she cares for as if they were her own kin.

The residents there are a family, Sullivan said. But their way of life in the park is ending. One of the last pockets of affordable housing in Fredericksburg, it will be developed following its owner’s bankruptcy and the sale of the property to the Silver Cos.

Sullivan’s partner of 25 years, Lois, and her employees help out the residents, too. They run errands to pick up food and medicine for the members of the park who are homebound or who don’t have enough to get by.

Her landscaping business, Ground Keepers, is just down the street.

Sullivan’s father, who died when she was 18, also worked in the neighborhood. He owned a service station near where Roberson’s Music is now. She lost her mother at 14 and her grandmother at 21.

“His birthday just happened,” she said. “It’s emotional knowing I won’t be here next year for his birthday.”

Her trailer, bought by her father in 1969, is too old to be moved. According to the court documents she and other residents have received as part of the bankruptcy process, she’s getting no compensation for leaving it behind.

She’s more concerned about the residents with special needs and no family. Sullivan is also worried about the local wildlife, which includes a herd of deer. She’s taken a number of stray cats to a vet to get vaccinated and be spayed and neutered.

She acquired a couple of acres in Caroline County—the only place in the area where land is still affordable, she said—and wants to take some of the elderly members of the park with her.

“I’m worried. Personally, I don’t know what’s going to happen.” she said. “There’s nothing here for the elderly. They leave their homes and fade away and die. They’re so proud. They say they are going to live with family, but in the last 40 years I never saw anyone come visit them.”

The park’s owner, Carter Yates Embrey, who inherited the park from his parents, filed for Chapter 11 bankruptcy on Dec. 3, 2015.

The case was converted to Chapter 7 on April 6 and a sale of the 41 parcels to the Silver Cos. has been approved by the U.S. Bankruptcy Court. There were 28 addresses that received legal lease notices. Silver, operating under the name Cowan Crossings East LLC, is paying $1.45 million.

The funds from the sale will be distributed by a trustee to Embrey’s creditors. Union Bank & Trust will receive $849,613.40, the Fredericksburg Treasurer’s Office will receive $80,000 for delinquent real estate taxes, and the Internal Revenue Service will receive $137,749.54 for a federal tax lien.

Embrey gets the rest.

As part of the sale and bankruptcy agreement, all leases of one year or less will be upheld. All others, which were never written down, but Sullivan and others say were understood, are nullified.

Willie and Shirley Minter have lived in the trailer park together for 25 years. He moved in on Labor Day 1972 before she joined him there.

Back then, Willie Minter was able to work, but after heart surgeries and with Shirley Minter’s chronic obstructive pulmonary disease, they live on Social Security checks.

He hears rumors about what’s happening, but said no one has stopped by to talk straight with him.

“You don’t know who to believe and who not to believe,” he said.

The couple doesn’t know where to go on a fixed income and such high medical bills. They pay $325 a month to rent the land their trailer is on.

Their daughter, Ruby-Francis Etella Alsop, lives in a nearby trailer. Her legs were amputated a couple of weeks before the park closing was announced, and she gets around in a motorized wheelchair—even taking it to Central Park.

“She’s like we are ... fixed income,” said Shirley Minter. “Everyone is up in the air. We’re all just worried.”

The family is having a garage sale to get rid of everything they can’t move, and they plan on leaving the trailer. Until they can figure something out, Willie Minter said he might buy a camper to park on his son’s property. His truck is the only thing of value on the lot, he said.

“I think whoever buys it should buy the trailers,” he said. “It’s not our fault this is happening.”

Albert Corey, Alsop’s roomate, likes the park because it’s close to everything. He can walk to Giant for food and have dinner out at Country Cookin’.

He found a basement apartment in Spotsylvania County he’s hoping to rent.

Jud Honaker, president of commercial development for the Silver Cos., said there is no definite plan for the property and he doesn’t want to kick people out of their homes without helping them.

He said the tenant notices were part of a typical bankruptcy proceeding, alerting renters that a new owner is not obligated to take new leases.

“It’s no one’s intent to push these people to move right away,” he said.

Honaker said when the company does come up with an idea, he will work with the residents to help them transition.

“We may not take long leases, but we can allow them to extend month to month,” he said. “We’re not just going to kick them out the next month without any notice.”

He said, however, if park residents find better housing they should take advantage of that.

“A lot of trailers have been there a long time, with age comes the need for repair,” he said.

George Dickman, 71, lived downtown, but moved to the park in 2007 when his rent went up.

Sullivan wants him to move to Caroline County with her.

“I’ve never been to Bowling Green,” he said. “I don’t know what’s there. It would have been nice to have more notice. But what can you do?”

He has two dogs, Ruby and Baby Girl, and a cat named Trouble.

When Dickman moved to the park, he could still walk. That was the draw, being able to walk to shops and fast food restaurants.

“But I can’t walk well anymore,” he said. “The best part about living here was walking.”

Dickman rents the trailer and land for $750 a month. Between that and his electricity bill, his Social Security payment goes fast.

But he feels sorry for neighbors who recently purchased their trailers and have been fixing them up.

“All that for nothing,” he said.

Dickman said he had an inkling something would happen to the park when work on utilities near the property began and the Cowan Crossing retail development went up across the street—with Chipotle and Starbucks, places people in the trailer park don’t frequent.

“I’ll miss some of the people here,” he said. “And the trees. It’s peaceful.”

Fredericksburg City Councilman Tim Duffy, whose ward includes the trailer park, said he is working to find resources for the residents who will be displaced.

He knocked on all the doors in the park to find out what people knew and what they needed to know.

He is talking to the Central Virginia Housing Coalition about affordable housing and assistance for residents who will need help with security deposits to utility deposits. He is also working with Habitat for Humanity to try and get some residents in their own, affordable homes.

Duffy said he wants to get across that the situation is not as urgent as it seemed at first in the notices.

“We are lucky to have a developer who understands the significance and will work with us not to place the burden on these people,” Duffy said.

He and City Manager Tim Baroody are planning a meeting in October at the park to let residents know what options and help are available in the city. Still, he said, affordable housing needs to be more of a priority in Fredericksburg.

“What is so great about this city is its diverse cultural and economic background,” he said. “It’s really important to focus on affordable housing as we develop and redevelop parts of the city. We need to balance the high rate of rentals here with affordable options so people can live and work in the city.”

He said along with the financial cost of moving, he’s concerned about the emotional toll the park’s eventual closure will take, particularly on the older residents.

Sallie Carter has lived in the Fredericksburg Trailer Park for more than 30 years. Nearly 91, she used to live in an apartment on Hanover Street downtown, and remembers walking to the Fredericksburg Hardware store “to get a hammer or this and that.”

“That’s not there now,” she said about the redevelopment of the hardware store lot into Amelia Square. “There are those townhouses. They sell for a million dollars. Fredericksburg has changed a lot and we have nowhere to go.”

Originally from Caroline, Carter never married and doesn’t have children. Her four cats keep her company.

She’s not sure she wants to move back to Caroline with Sullivan.

She named off relatives who might take her in.

There’s nothing here for the elderly. . . . They say they are going to live with family, but in the last 40 years I never saw anyone come visit them. —Kelly Sullivan, lifelong resident of fredericksburg trailer park