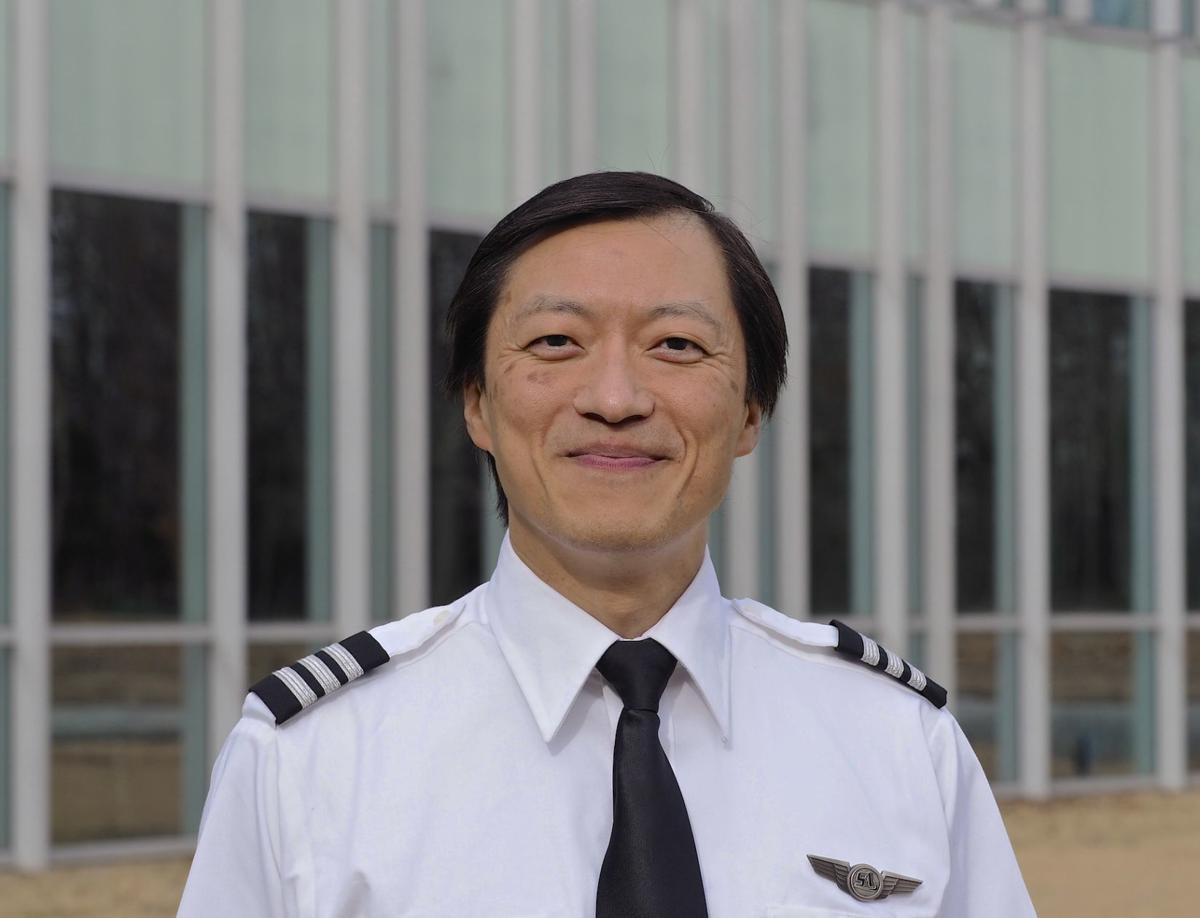 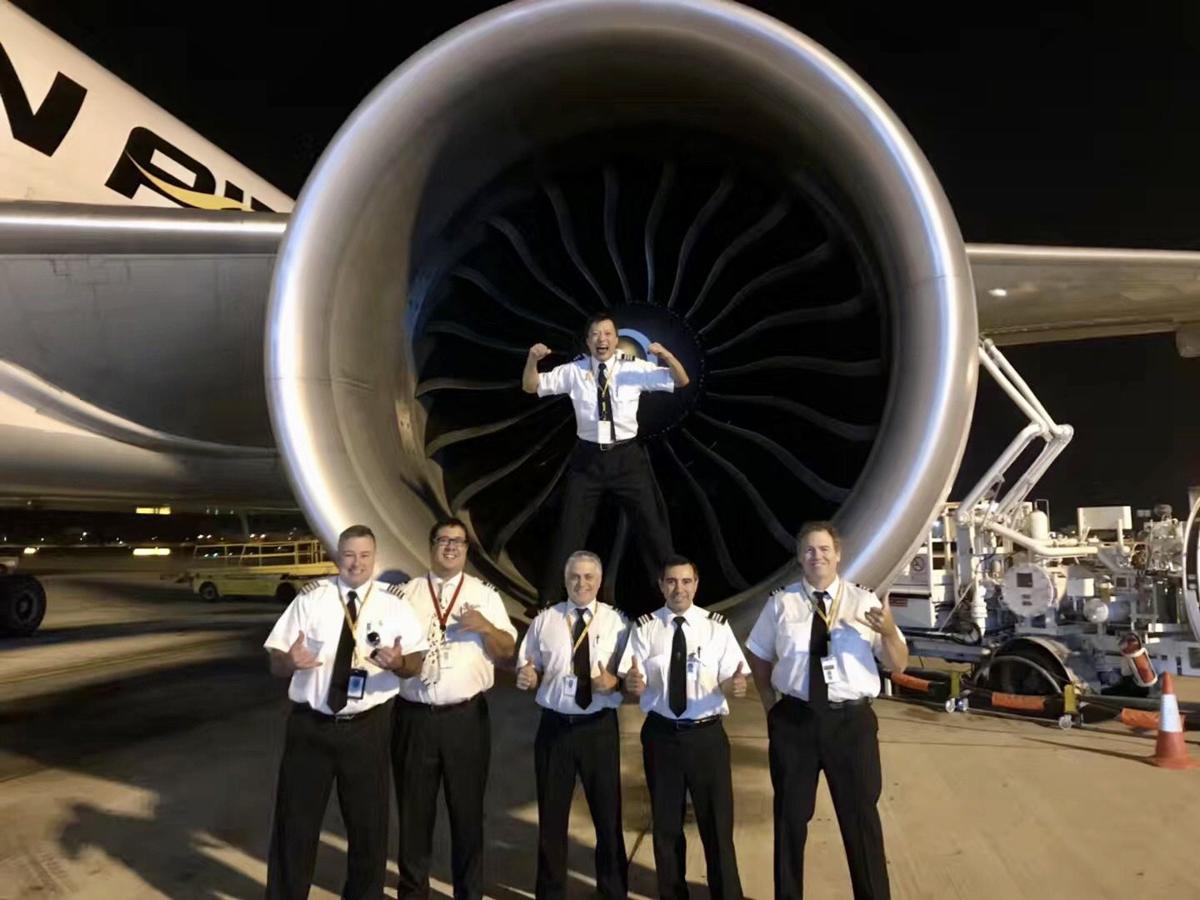 Dr. Tuk Ting, standing in the throat of a jet engine, poses with colleagues flying charters for Atlas Air. 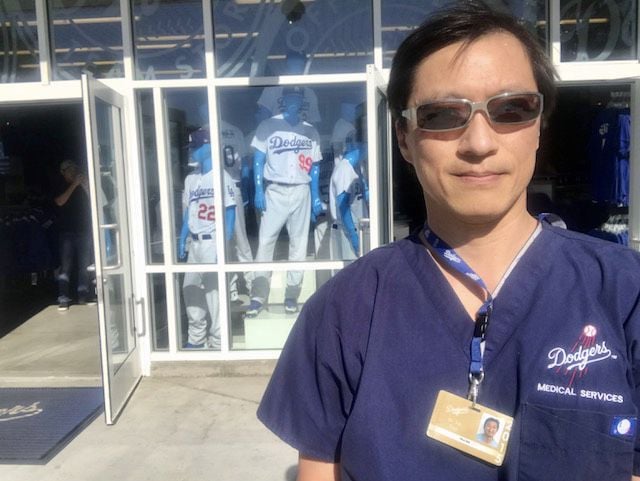 Dr. Juk Ting pauses outside Dodgers Stadium, where he was an emergency physician for the Los Angeles Dodgers for 11 years. 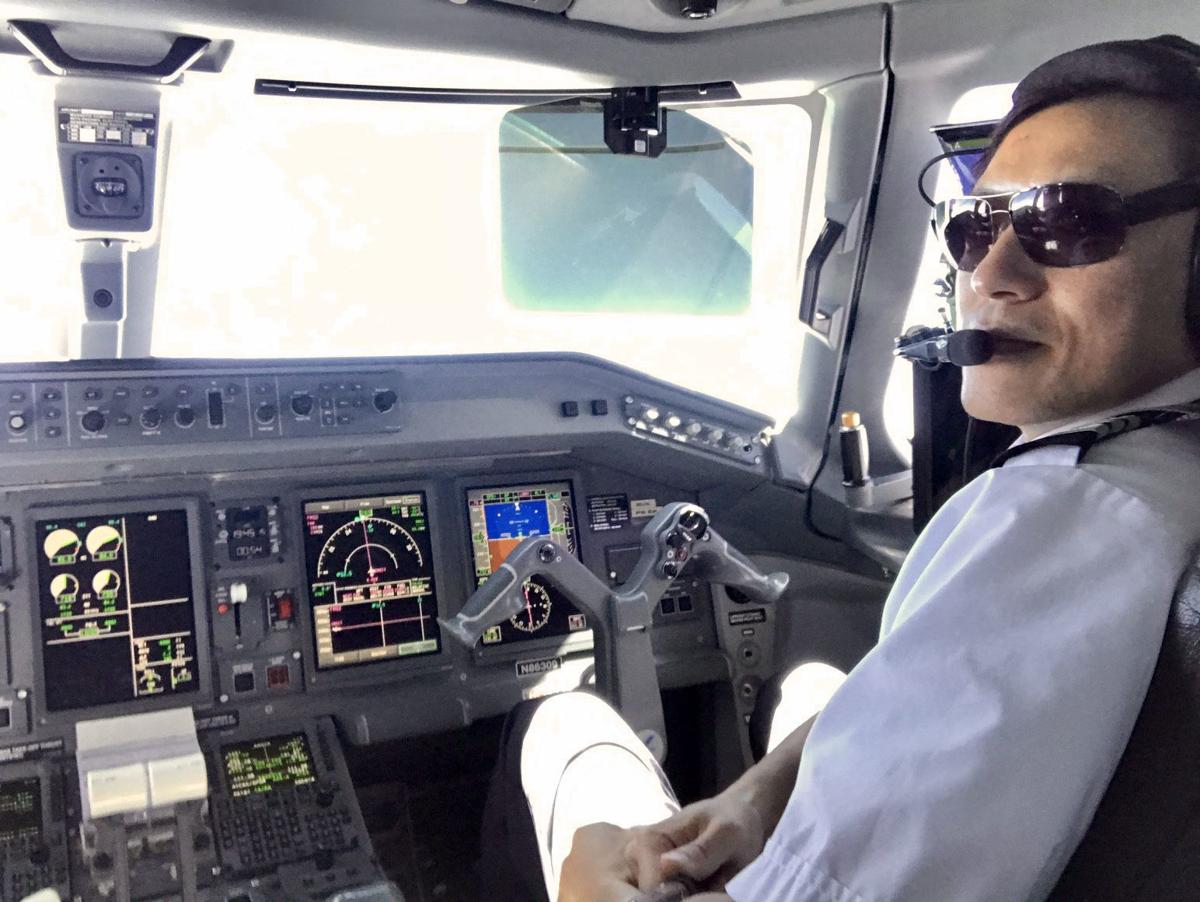 Dr. Juk Ting poses inside the cockpit of one of the commercial jets he has flown.

Dr. Tuk Ting, standing in the throat of a jet engine, poses with colleagues flying charters for Atlas Air.

Dr. Juk Ting pauses outside Dodgers Stadium, where he was an emergency physician for the Los Angeles Dodgers for 11 years.

Dr. Juk Ting poses inside the cockpit of one of the commercial jets he has flown.

He struggled at Orange County High School as a Taiwanese immigrant learning to speak English.

With poor grades, he enrolled at Germanna Community College, planning to become an auto body mechanic. He credits the college with changing his life’s flight path.

Dr. Juk Ting—the physician–pilot who in January flew the first evacuation flight of Americans out of Wuhan, China—arrived in Virginia’s Orange County in 1983 as an overwhelmed 14-year-old.

Ting, who now lives in Orange County, Calif., works both as a doctor in the emergency room of the City of Hope Hospital in Los Angeles and as an international pilot flying jumbo jets for Kalitta Air.

The State Department chartered a Boeing 747 through the Michigan-based company to evacuate U.S. citizens from Wuhan. Kalitta asked for volunteers, and Ting jumped at the chance to fly Americans from China’s Hubei province to the United States.

“I can’t imagine being trapped in a country in chaos,” Ting said in an interview last week with the Culpeper Star–Exponent. “I just felt I needed to do this.”

As the viral outbreak flared, Chinese authorities had abruptly blocked transportation in and around Wuhan, a metropolis of 11 million people.

Ultimately, the State Department chartered five flights from Wuhan to carry some 800 people back to the United States, who were then quarantined for 14 days, Axios reported.

“You’re trapped in a city: There’s no medical care and you can’t get out. How horrible is that?” Ting told a California news outlet before his flight.

“We’re talking about no food, no water, no supportive system in place, and you’re trapped. I’d certainly like to get people out of there.”

His passengers were 195 diplomats, their families and other Americans who desperately wanted out of the city that was the center of the fast-growing outbreak. All the passengers were screened for symptoms, and checked repeatedly en route.

Ting’s outbound flight from Incheon, South Korea, to China took two and a half hours; the return to U.S. soil took 11 hours.

On Jan. 28, Ting’s 747 made a refueling stop in Alaska, before continuing to March Air Reserve Base near Los Angeles, where passengers volunteered to stay for three days while medical staff monitored their health.

Zink described the scene to National Public Radio as “a moving and uplifting experience.”

The cargo jet’s cockpit was on a different deck than where passengers were seated, sealed off for safety purposes. For such evacuations, seats are installed in the aircraft’s cargo deck because they are easier to disinfect, Ting said.

The pilot’s precious cargo included children from 1 month old to teenagers. A pair of U.S. military medics and a State Department staff member worked directly with his passengers, Ting said.

When the return leg stopped in Anchorage, Ting handed over the 747’s controls to another pilot. He had reached his flight-hours limit; regulations required that he rest.

“Being the first flight, we were all quite concerned, but we knew we were their only hope,” Ting said. “So we just did it. The company did a good job protecting us. No one involved (in working on the flight) has become sick.”

He said he saw piloting the rescue mission as a way of giving back to America, where he and his parents have built a wonderful life.

His family had come to America from Taiwan when he was 14. Living in eastern Orange County’s Lake of the Woods community in the early 1980s, he spoke only his native Mandarin Chinese language and struggled at Orange County High School.

Because of early language difficulties, he wasn’t accepted by universities to which he applied. He decided he would become an auto-body mechanic because he was good with his hands, and enrolled in Germanna’s automotive program.

Ting attended the community college from 1986 to 1988. There, he learned to have faith in his own abilities, thanks to counselor Audrey Jordan.

In 2018, the Star–Exponent reported that Jordan remembered Ting as a quiet young man. “He wasn’t seeing his own potential, and I thought he was settling,” she said then.

He said the community college was a good choice for him because it gave him confidence.

Ting excelled at Germanna, graduating in 1988 with an associate’s degree in arts and sciences, and transferred to Virginia Commonwealth University, earning a bachelor’s degree in chemistry. He went on to become a doctor, graduating from Philadelphia College of Osteopathic Medicine in 1995.

He completed a pediatric internship in New Jersey and an emergency medicine residency in Ohio. For three years, until 2001, Ting worked in the emergency department at Cleveland Clinic/Metro Health Medical Center.

Then, Ting learned that the Los Angeles Dodgers had signed four Chinese prospects and were seeking a stadium emergency doctor—particularly one who spoke Chinese.

He spent 11 years as a team doctor at Dodger Stadium, dealing with everything from player injuries on the field to heart attacks in the crowd.

He remembered, as a teen, riding past Orange Airport on State Route 20 every day on the school bus, wishing he could learn to fly.

He began taking flying lessons, and launched a second career.

Germanna President Janet Gullickson said Ting’s journey exemplifies what students can do with a hunger to learn and the right kind of encouragement.