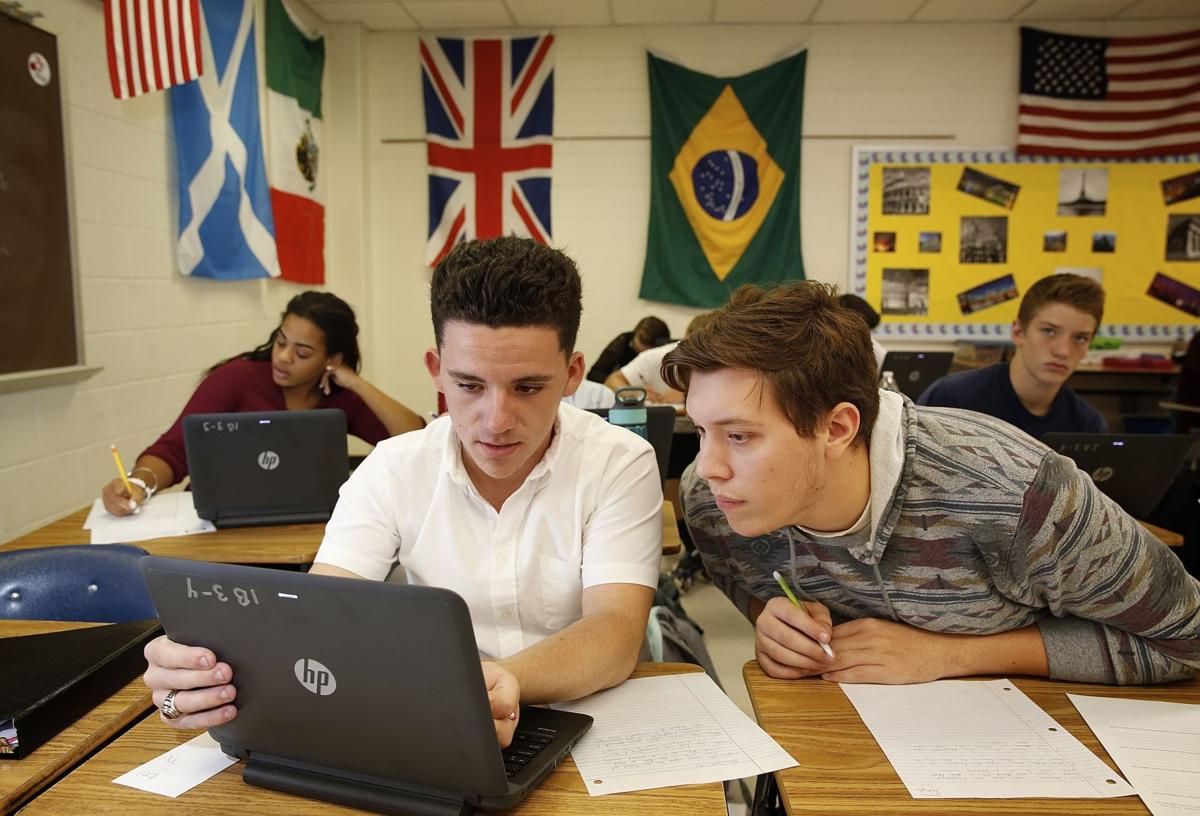 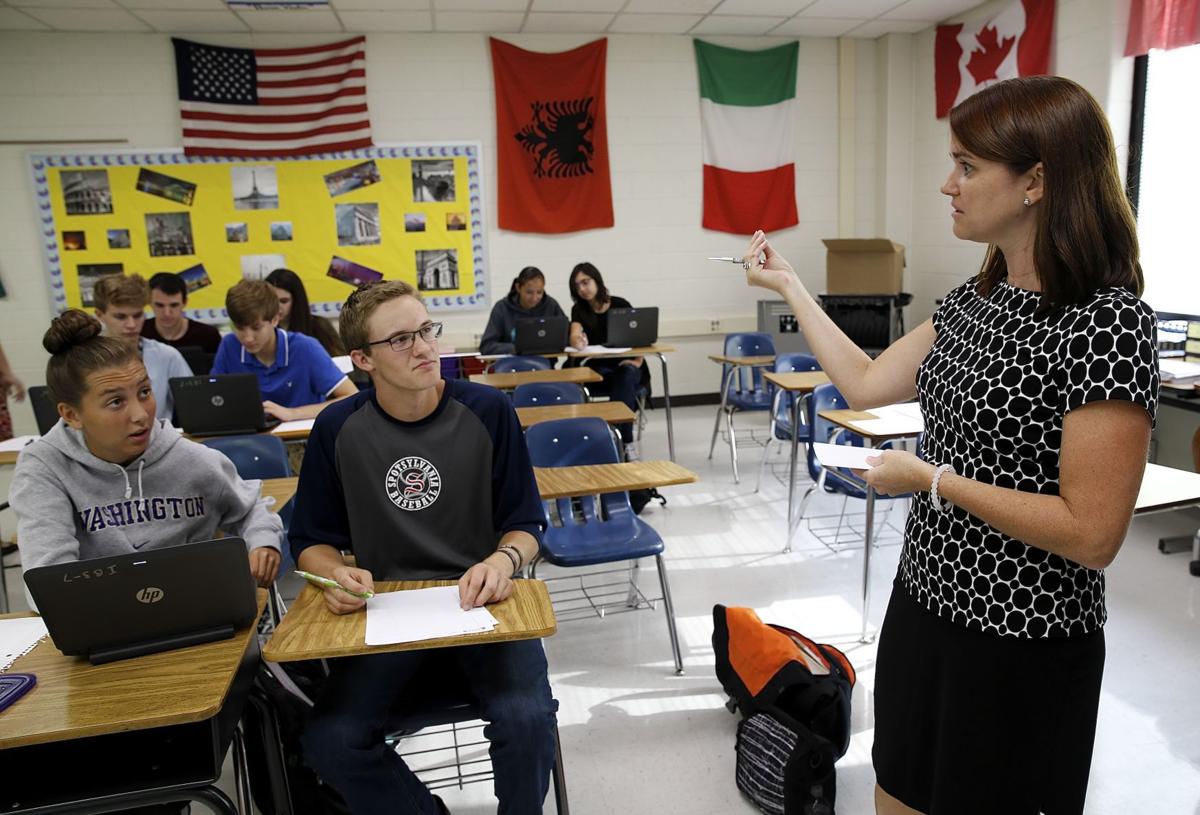 Maddy Jones (left) and Jonathan Rivard (center) listen to their teacher, Cathy LaRocco during their IB History class. Spotsylvania High School has launched an International Baccalaureate program this year. Students travel from other high schools to take the IB courses.

Maddy Jones (left) and Jonathan Rivard (center) listen to their teacher, Cathy LaRocco during their IB History class. Spotsylvania High School has launched an International Baccalaureate program this year. Students travel from other high schools to take the IB courses.

Watching over her students, Spotsylvania High School history teacher Cathy LaRocco said that relinquishing control of a lesson can be a challenge.

“You can’t teach it like a traditional class, per se,” she said. “They need to be doing more inquiry on their own, more discovery, more coming to their own conclusions of things.”

Student ownership of learning is at the heart of IB, LaRocco said.

“Sometimes as a teacher, that can be kind of hard to do, because you’re thinking ‘OK, I know this stuff and I’ve got to tell you,’ “ she said. “But … especially in IB, they encourage the student to be at the center of the process.”

Developed in the late 1960s in Switzerland as an international standard for college preparation, IB targeted the children of diplomats, businesspeople and other globetrotters.

It never really took off in the U.S., where College Board Advanced Placement classes have been far more popular, with around 15,000 programs to IB’s roughly 900. But IB is growing in the nation and the region, which has one program in Spotsylvania County, two in Stafford County and one in Fredericksburg—where there is also a broad middle-years initiative.

Students in LaRocco’s class said the IB program appealed to them because of its full slate of integrated, rigorous courses, its emphasis on independent thinking and the chance to develop research and writing skills. Completing the full program also offers an internationally-recognized IB diploma in addition to a standard diploma.

“The IB extended essay is often described to me by students as the most satisfying experience they had in high school,” said Jay Mathews, an education reporter for The Washington Post and the author of “Supertest,” a book about IB.

AP and IB are similar in that they provide college-level courses and final exams that can earn college credit, and tend to impress selective colleges, he said, with IB’s emphasis on writing over multiple choice questions as the major difference.

“I often tell parents and students it is like choosing between a Mercedes and a BMW,” he said.

In Spotsylvania County, students can apply to attend the new program even if Spotsylvania High isn’t their home school, and similar options are available in Stafford County at Mountain View High School and Brooke Point High School.

And in Fredericksburg, students at James Monroe High School have the option of pursuing an IB diploma—but the sixth through 10th grades are all moving to the IB “Middle Years Programme.”

Three courses make up the core of the curriculum, according to Spotsylvania High School IB coordinator Jennifer Navarrete.

They are the Theory of Knowledge, which “asks students to reflect on the nature of knowledge, and on how we know what we claim to know,” according to the IB website; the extended essay, an independent, self-directed research project ending with a 4,000 word paper; and Creativity, Activity and Service, which incorporates the arts, physical activity and volunteering.

At Walker–Grant Middle School in Fredericksburg, unique in the area for using the Middle Years curriculum and including every student, principal Melanie Kay–Wyatt said it has increased student engagement.

“What it really does is brings creativity back to the classroom,” she said. “The students actually are leading their own learning. It’s a different approach to learning.”

Brooke Point Principal Tammy Houk said that IB and AP are becoming more similar. But like other proponents of IB, Houk feels its integrated learning approach is still invaluable.

“If you’re in an IB class, at the end of the class you can take an AP test and probably do well on it. You cannot do it in reverse, or you couldn’t have years ago,” Houk said.

With new options, it’s tough to know how to choose, especially when it seems the students’ colleges or careers might hang in the balance.

Christian Bai, 13, feels the pressure of those choices, despite his father’s conscious efforts to limit academic tension.

Though he had just started eighth grade, he recently attended an information session on AP classes at Spotsylvania’s Freedom Middle School to begin planning his high school courses.

“I think about my grades a lot. I pressure myself,” Christian said. “I get stressed out a lot with homework.”

His father, William Bai, said he grew up with a fairly stereotypical Asian background, with a lot of academic pressure, and wanted to avoid that with his children.

“I am very cognizant of trying not to pressure him on getting straight As and being the absolute number one academically,” Bai said. “I do expect him to do his best . . . but I’m not going to harp on him as long as he puts in the effort that’s required. It’s trying to balance.”

Christian wants to work with computers, though he’s not sure whether he wants to design them or program them—maybe a little of both, he said.

He and his father aren’t sure whether IB would be for him. The 13-year-old doesn’t enjoy writing as much as math, and knows he wants to take challenging math and science classes.

Because IB is an integrated curriculum, unlike the pick-and-choose aspect of AP, students commit to completing the program. Similar to many governor’s schools, dropping out of the program is difficult. On the other hand, the classes reinforce each other more than with AP.

IB does have higher-level STEM classes, but their availability depends on what a given school is offering. At Spotsylvania High, students have to choose between IB biology and IB chemistry for science, meaning that a student particularly interested in STEM might need to go the AP route for more choices.

But at the same time, universities recently have emphasized the need for strong research and writing skills in their STEM students, a strong point for IB.

The good news for students and parents is that either program is well-received by admissions departments. What matters, admissions officers say, is that students challenge themselves.

Hundreds of high school students milled around dozens of tables staffed by admissions officers at a college fair at Spotsylvania Towne Centre on Wednesday night, asking questions and trying to make a good impression.

At two of the most crowded tables, for the University of Virginia and George Mason University, it could take 10 to 20 minutes to get a moment with a college rep.

Various admissions officials had slightly different perceptions of IB, with some finding it more rigorous than AP or more popular for students pursuing STEM careers, while others found IB and AP roughly equal.

Like staff from other universities, Ashley Milligan, a senior admissions counselor at U.Va., said that the school evaluates applications based on the context of the high school they’re coming from.

“It’s pretty unusual for a school to have both AP and IB,” Millegan said. For students to have a choice, as in Stafford and Spotsylvania, isn’t common, and Northern Virginia is one of the few areas she’s seen it.

“I think we see across the board both programs really prepare someone well for U.Va.,” she said. But if a student is going to pursue IB, the university generally expects them to complete the full IB diploma.

At George Mason’s table, Patrick Money, the senior assistant director of admissions, said he felt IB was more popular for science programs than AP. But Mathews, the author, said AP courses tend to be more “in sync” with college courses.

Ashley Woodard, the associate director of admissions at the University of Mary Washington, said that IB is a more challenging program, but the university doesn’t give preference to one or the other, because it’s so rarely up to the student.

“It is an expectation when we’re reviewing applications that students are taking the most rigorous classes their schools offer,” Woodard said.

But most of the admissions offices are looking for roughly the same thing.

They want students who demonstrate that they challenged themselves with the classes available to them—whatever those might be.