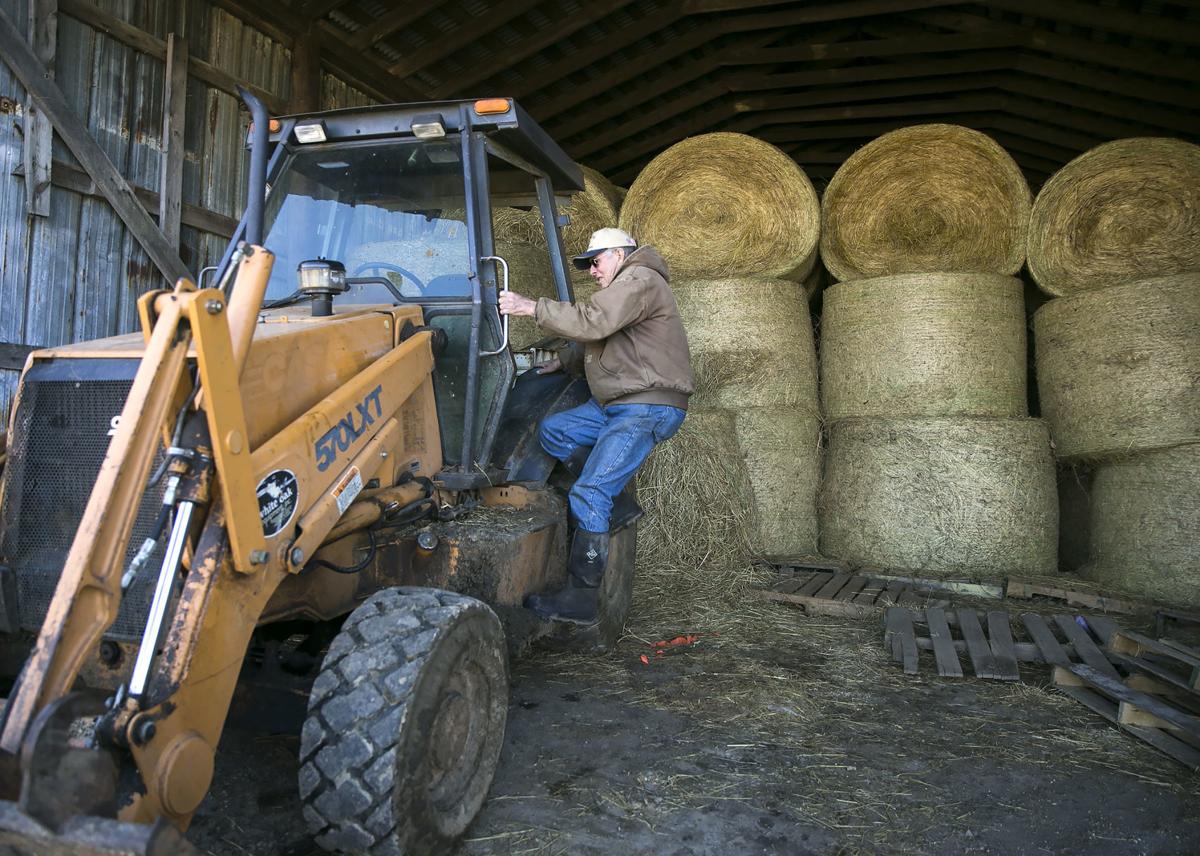 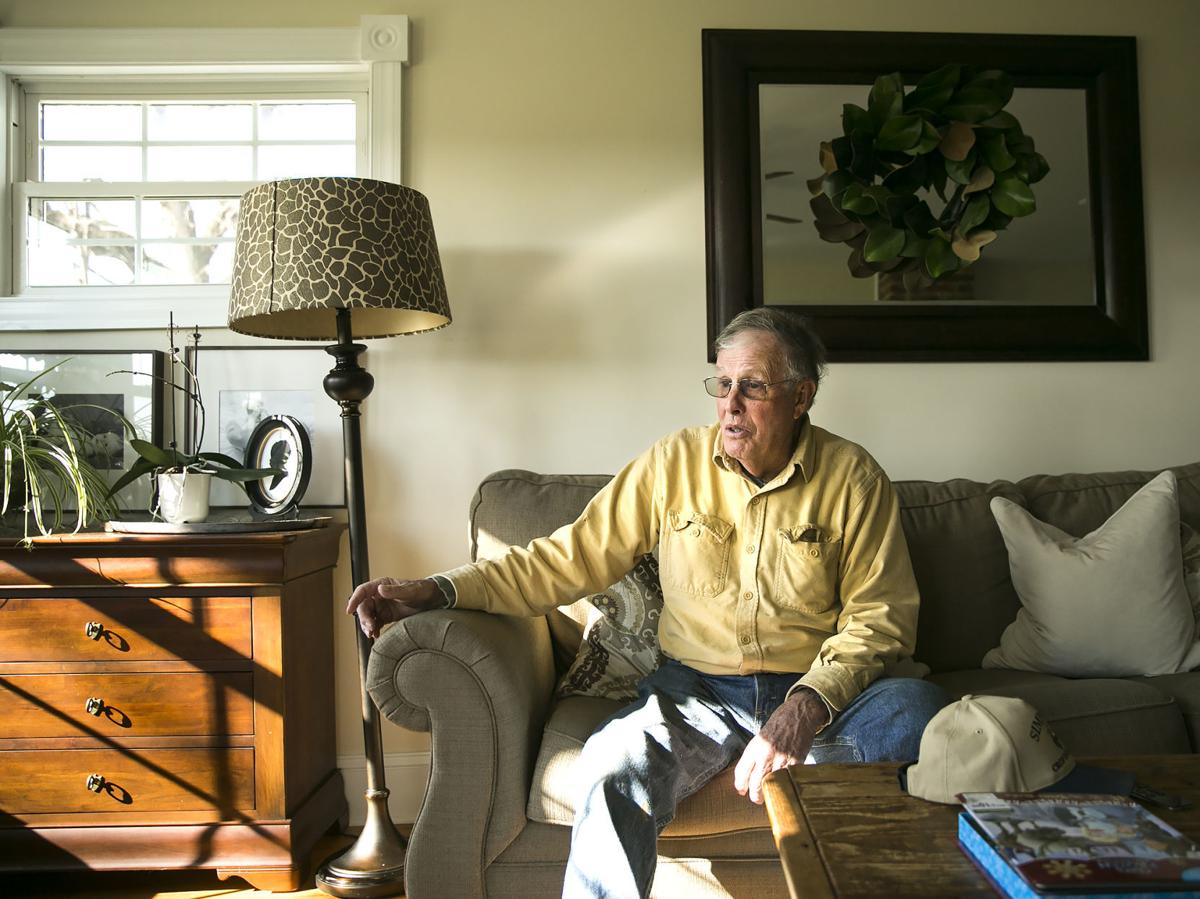 Silver does his best to remain positive, but says ‘stress and strain’ can come from influences outside his control. 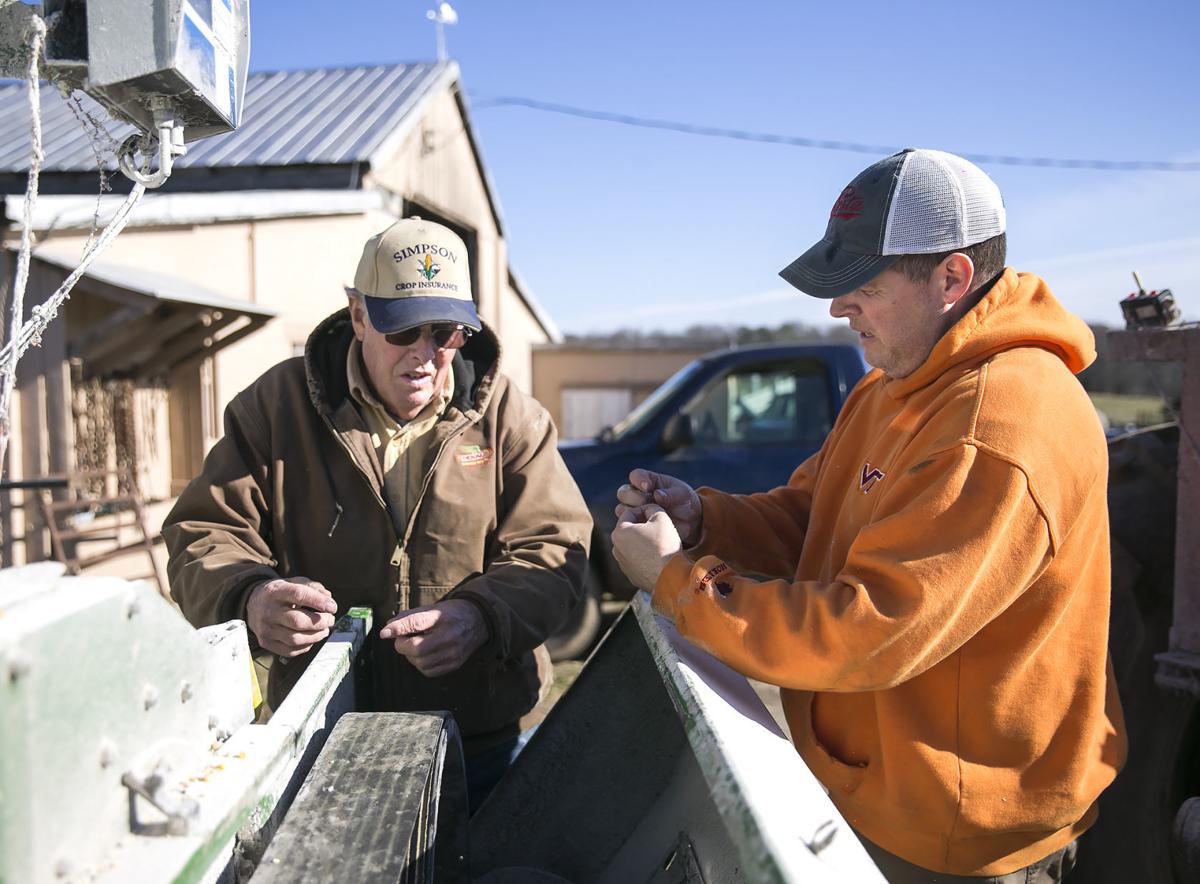 Jerry Silver and his son, Michael, run Silver Ridge Farm together, work they enjoy, despite the challenges. 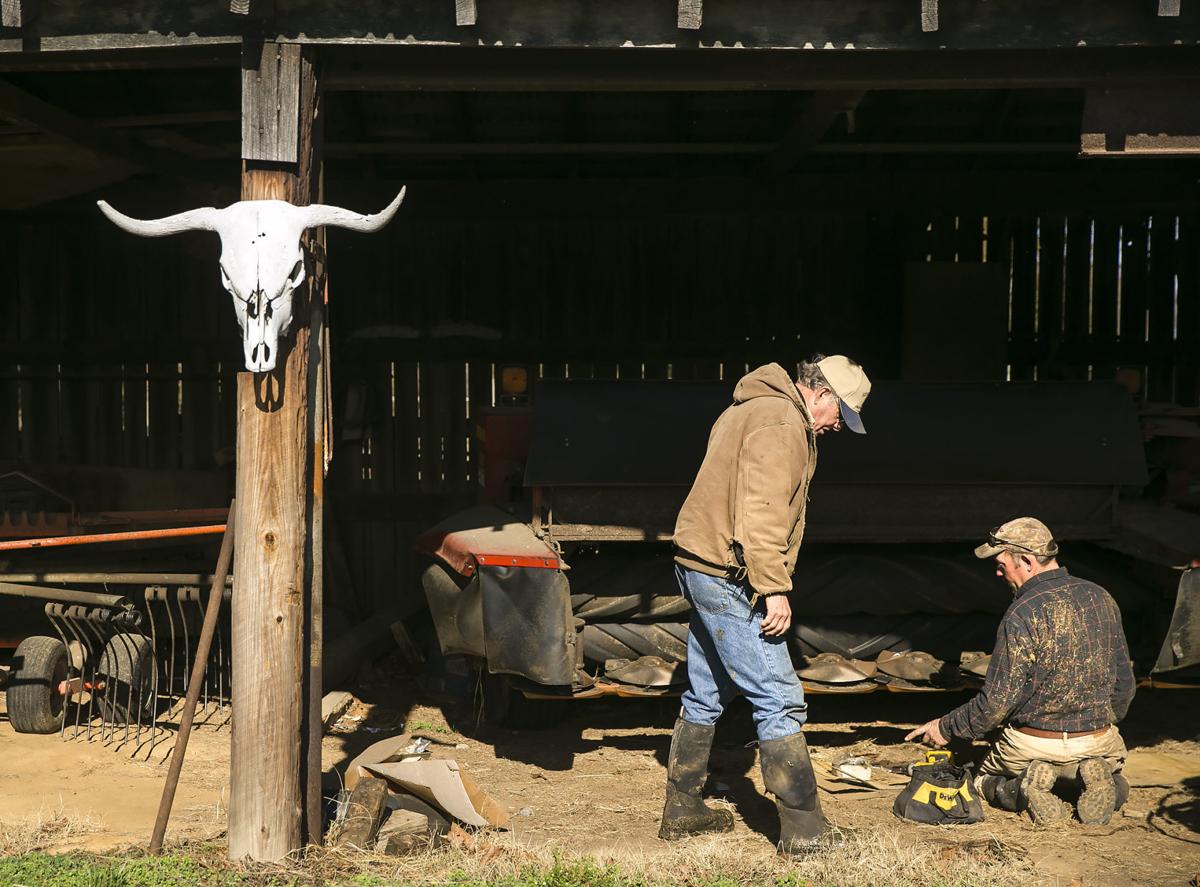 Jerry Silver talks with employee Tony Hall about some of the work that needs to be done on the farm. 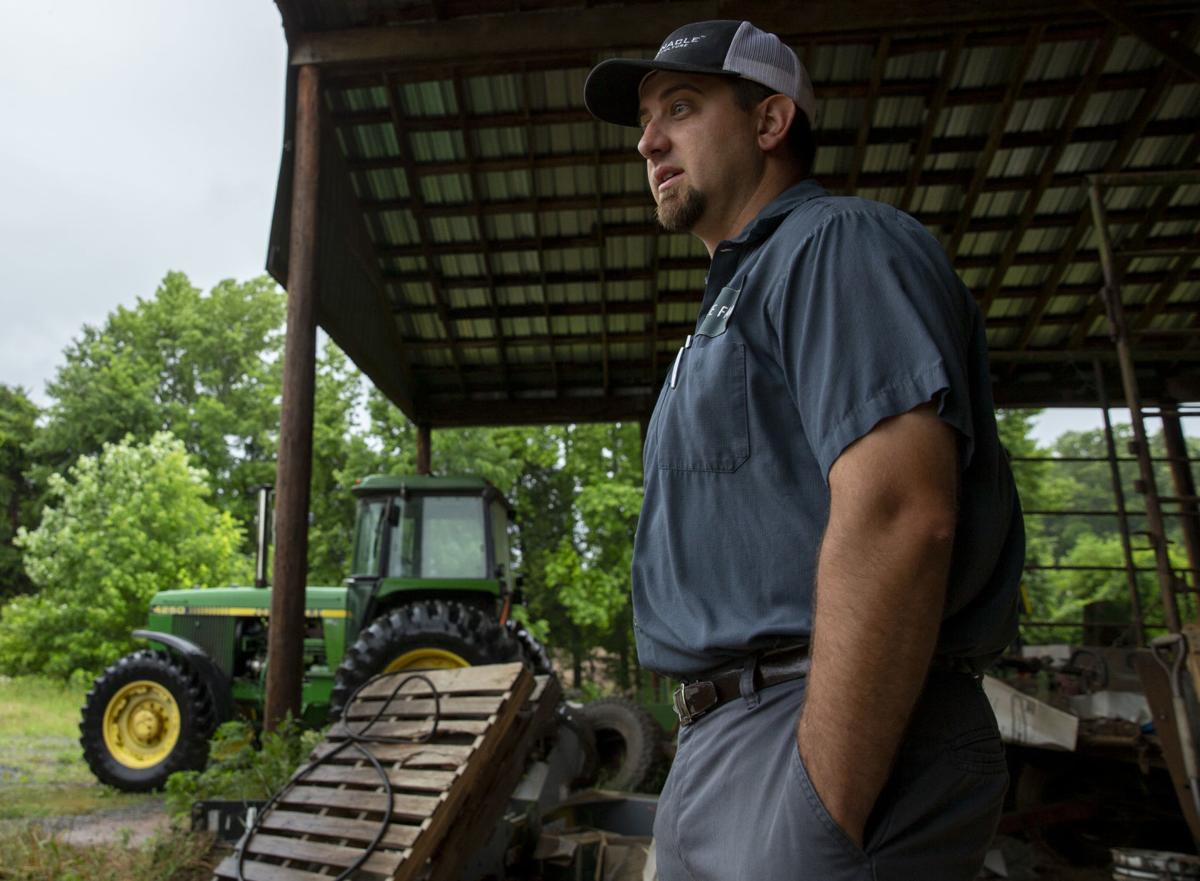 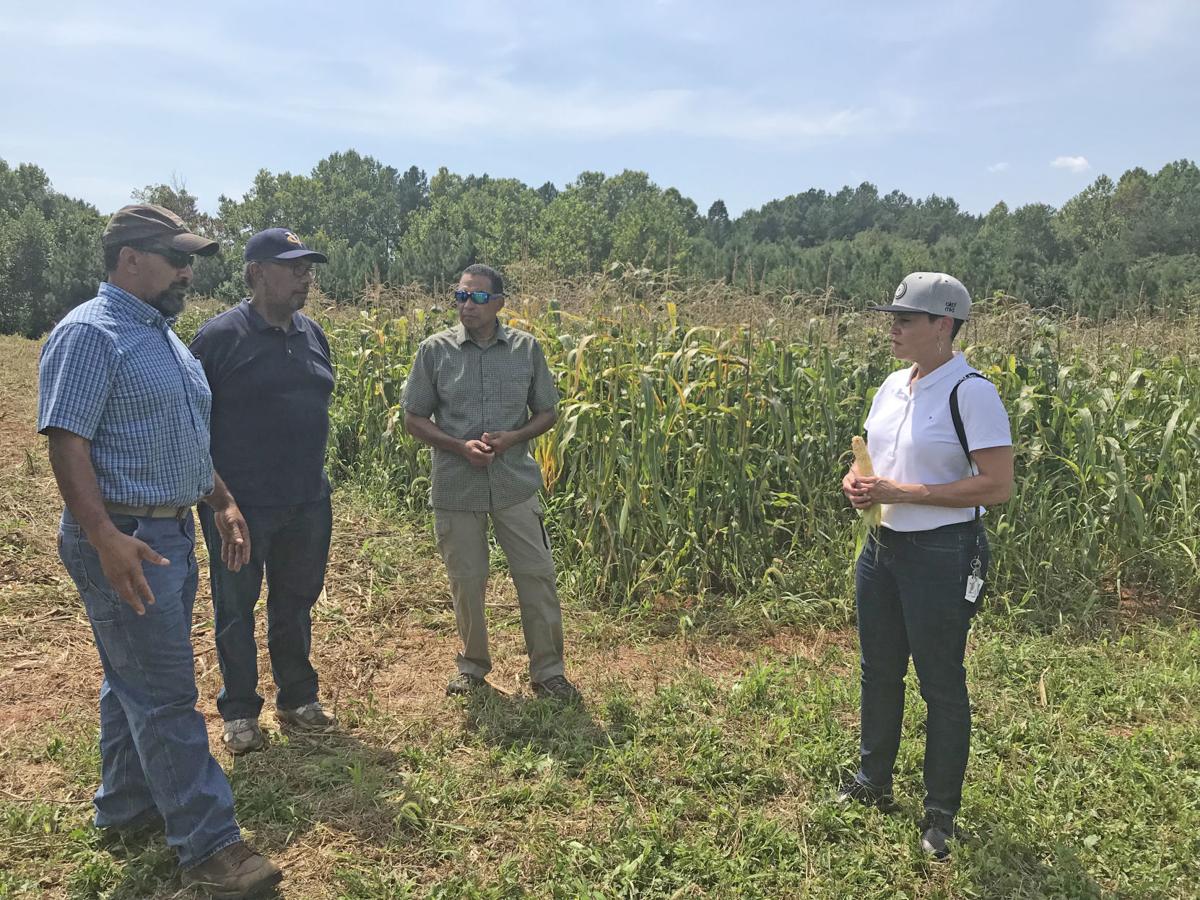 Silver does his best to remain positive, but says ‘stress and strain’ can come from influences outside his control.

Jerry Silver and his son, Michael, run Silver Ridge Farm together, work they enjoy, despite the challenges.

Jerry Silver talks with employee Tony Hall about some of the work that needs to be done on the farm.

Jerry Silver knew what he was getting into when he became the fourth generation of his family to farm the land.

The Stafford County man accepted the long hours, high risks, and the fact that he’d face worse odds with Mother Nature than if he were gambling in Las Vegas. He figured that hard work would win the day—and at age 74, Silver would say he’s a blessed man indeed.

“I never thought of doing anything else,” said Silver, who hopes to keep working until he’s 90 on the sprawling farm where his children and grandchildren live. “I can’t imagine getting up every morning and not feeding cattle.”

But as Silver watches his two grandsons tromp around the same cornfields his father did, he acknowledges the farm world is changing in ways he’s never seen. In addition to the regular risks of too much rain or too little, ever-dropping prices for crops and ever-rising cost of equipment and supplies, Silver Ridge Farm also is influenced by a global economy, embargoes and trade wars.

Even tweets and Facebook posts about the nutritional value of milk- or meat-type products made from plants can cause a fallout for farmers, said Michael Silver, Jerry’s son and business partner.

“Stress is part of the job, and I expect it to be stressful, but I don’t ever remember feeling this kind of stress and strain,” the elder Silver said. “You just don’t have any control over what’s going to be your bottom line.”

Others in their industry are so concerned about how producers are faring as more farms face foreclosure, they’re looking into a topic that isn’t exactly discussed regularly in agricultural circles.

That’s the issue of mental health, and state and federal farm-related groups are training those who deal regularly with farmers to recognize the warning signs of suicide. The word itself tends to be so stigmatized among this population that those addressing the issue are careful not to use it.

“We are trying to be subtle in the way that we present the message,” said Jewel Bronaugh, commissioner of the Virginia Department of Agriculture and Consumer Services. “The message is not suicide prevention, it’s farmer stress and farmer health.”

She formed the Farmer Stress Task Force last spring after hearing, repeatedly, about the high rate of suicide among farmers. A 2016 study by the Centers for Disease Control and Prevention said those working in farming, fishing and forestry were 3.4 times more likely than other Americans to die by suicide.

The CDC later retracted that data, saying there’d been a coding error, but other CDC reports acknowledged “the trends in suicide rates … are magnified in rural areas.”

Those outside of suburban settings tend to have less access to mental health services and face more isolation. There’s also the aspect of “rugged individualism,” said Melissa Blasiol, a coordinator at Mental Health America, Fredericksburg. By nature and necessity, farmers and other rural residents have learned to deal with whatever problems they encountered.

Bronaugh said when she first heard about higher suicide rates, then traveled the state and heard producers talk about stress and anxiety over whether they’d have an operation to pass along to the next generation, “it was almost like somebody knocked me over with a punch.”

She pulled together representatives from various farm businesses, and “everybody agreed that this was something that needed attention.” The first phase was to distribute mental health resources such as the number for the National Suicide Prevention Hotline. It’s 800/273-8255 and staffed 24/7. The next phase is to train people, such as farm extension agents, on ways to recognize farmer stress and strain.

Stafford farmer Glenn Dye, who’s involved with the Virginia Farm Bureau’s Young Farmers Committee, lobbied his group to include components of mental health issues in its safety agenda. Things are just getting started, but Dye is glad that it’s at least part of the conversation.

“We worry about all these other health aspects out there, but I think mental health gets put on the back burner,” Dye said. “It’s a hush–hush thing, and I hate that it is.”

“Farmers are very proud people,” he said. “We all think we’re tough and we can handle everything, but sometimes that’s not the case.”

Farming has always been a cyclical industry, full of ups and downs, highs and lows. The difference in recent years, Dye said, is that everything is down.

“Usually in agriculture, there’s a sector that’s up and a sector that’s down, that’s why guys diversify” by having several commodities, such as grain and cattle, he said. “There’s no bright spot right now. Not to beat the word ‘depressed’ into the ground, but the markets are just depressed in all sectors.”

The 2017 Census of Agriculture, released last spring, confirmed what farmers like the Silvers already knew: that expenses are going up faster than their income.

A Bedford County farmer puts the situation in even starker terms. James Young is pictured on the cover of the Virginia Farm Bureau’s January magazine for a story called “Stressed Out.” He talked about the difficulty of balancing inputs—what he pays for supplies and equipment—with what he’s earning.

Young said he kept borrowing money to make up the difference. Michael Silver said he could see how depressing that could be.

“When you work, work, work all the time and there’s no reward, you just don’t see there’s any way out of that hole,” said the younger Silver, who’s 47.

He and his father stressed how fortunate they are that much of their farmland has been put into easements, so it will never be developed. Their farm operation has remained solvent because it’s a combination of beef—sold from the farm as frozen steaks or burgers—along with a soybean cash crop and year-round slaughterhouse.

But Michael Silver said he knows how tough it is for young farmers to provide for their families. “They’re just trying to pay their bills, not buy a second home in the Hamptons,” he said.

‘NO DISHONOR IN QUITTING’

One of the speakers at the Virginia Farm Bureau’s annual conference in Norfolk last month was Minnesota grain farmer Theresia Gillie. She talked about dismal harvests in 2015 and 2016 that led to half-million-dollar losses. When her husband, Keith, faced the prospect of losing the farm that had been in his family since 1899, he took his own life in April 2017.

His widow told farmers in the audience that there was “no dishonor in quitting.” She said that depressed economies, crashed markets and harsh weather were out of their control and created situations that earlier generations of farmers never faced.

“That family farm means a lot to a lot of us, but our family is more important,” she said. “I do not want anyone in this room or across this nation to do what Keith did to me and my son.”

Dye, who with his wife, Amanda, received the Young Farmers Achievement Award at the same conference, agreed.

“There’s a lot of people who’ve had their farms for centuries,” he said. “They feel like it’s their responsibility to make it work, and sometimes it just doesn’t.”

Meanwhile, the Silvers say they’ll keep working and try to remain positive, just as their predecessors did before them.

“I think most farmers are pretty optimistic. They have to be,” Jerry Silver said. “Why else would you put half a million dollars’ worth of seed into the ground?”

Just getting the word out to farmers that there's a National Suicide Prevention Hotline (800/273-8255) can be a delicate matter.

Dr. Jewel Bronaugh, commissioner of the Virginia Department of Agriculture and Consumer Services, realized that last year when the newly formed Farmer Stress Task Force started meeting. Members agreed to create a photo of a farmer's hand with the hotline number, but how to distribute it? They couldn't just put the image on cards or key chains and set those on a table.

Farmers might not want to be seen taking one, she said. Members discussed having leaders of farm meetings discreetly put a card into each farmer's hand or printing the image on an agenda so "nobody knows what you do with it when you leave that meeting," Bronaugh said.

Melissa Blasiol, suicide prevention education coordinator at Mental Health America, Fredericksburg agreed that "you want to make it as easy as possible" for people to get information. She hopes national efforts to create a three-digit hotline for suicide prevention, similar to 911, will advance so people can simply keep a number in their heads.

In additional to the national hotline, which is staffed 24/7, the Fredericksburg office of Mental Health America mans a helpline during weekday business hours. It provides resources and provider lists and also is online at mhafred.org.

The American Farm Bureau acknowledges the many challenges and stress factors faced by today's farmers. "No one is immune," said President Zippy Duvall. Its website offers tips and resources  and is available at fb.org/programs/rural-resilience.

Not one mention in this article about the leading cause of farmers' distress, i.e. Donald Trump's tariffs. Even when Trump goes on to his reward in federal prison, China is not going to buy our commodities again as they did before. Why would they allow themselves to become dependent for their food supply on a country that might elect another Trump?