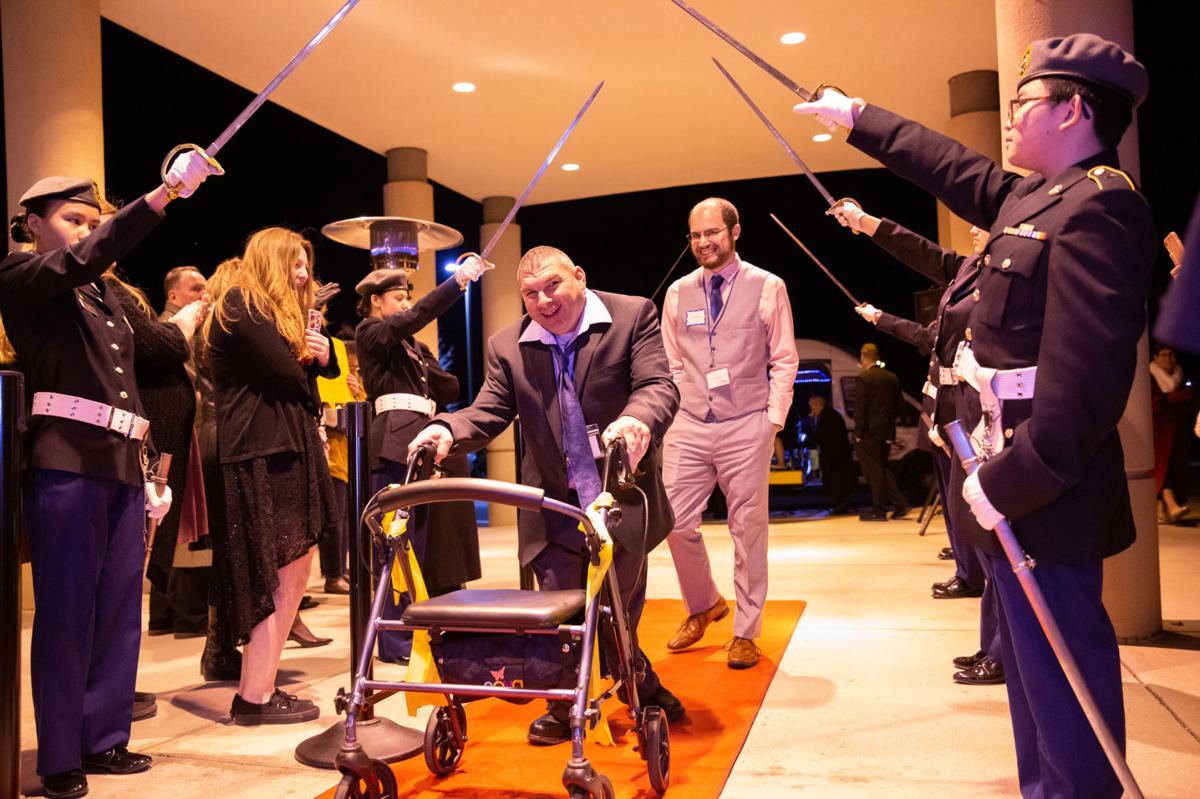 Prom-goers arrive to a red-carpet welcome and a salute from JROTC cadets at Salem Fields Community Church on Friday. 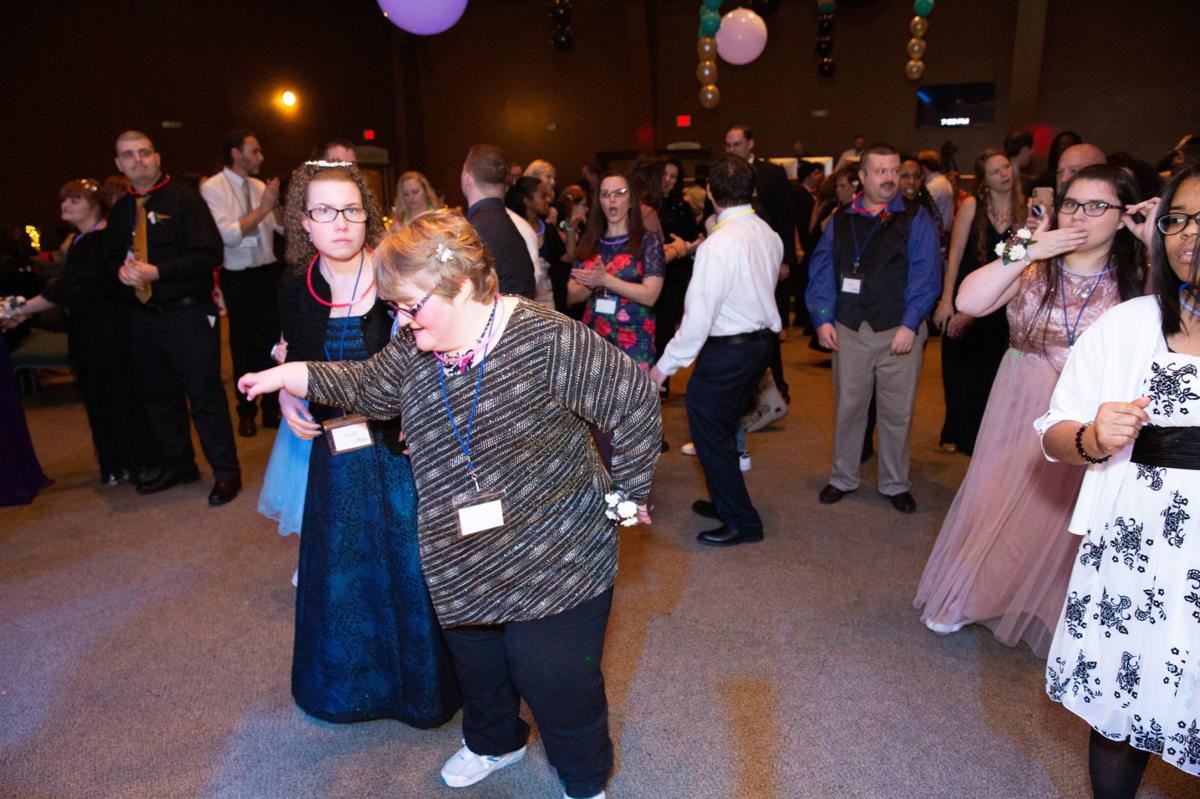 Katie Adkins dances during the Night to Shine at Salem Fields Community Church. (Sabrina Vaz-Holder for The Free Lance-Star) 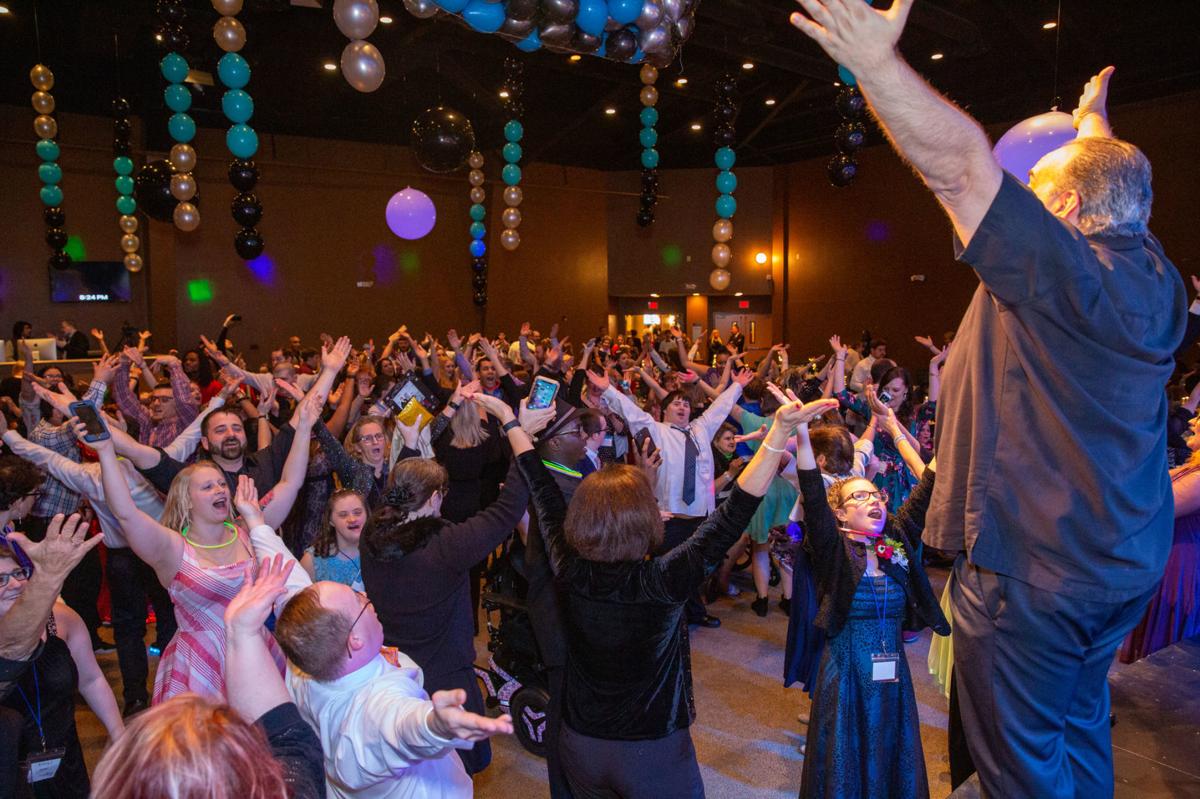 The crowd sings and dances to ‘YMCA’ at Salem Fields Community Church on Friday. 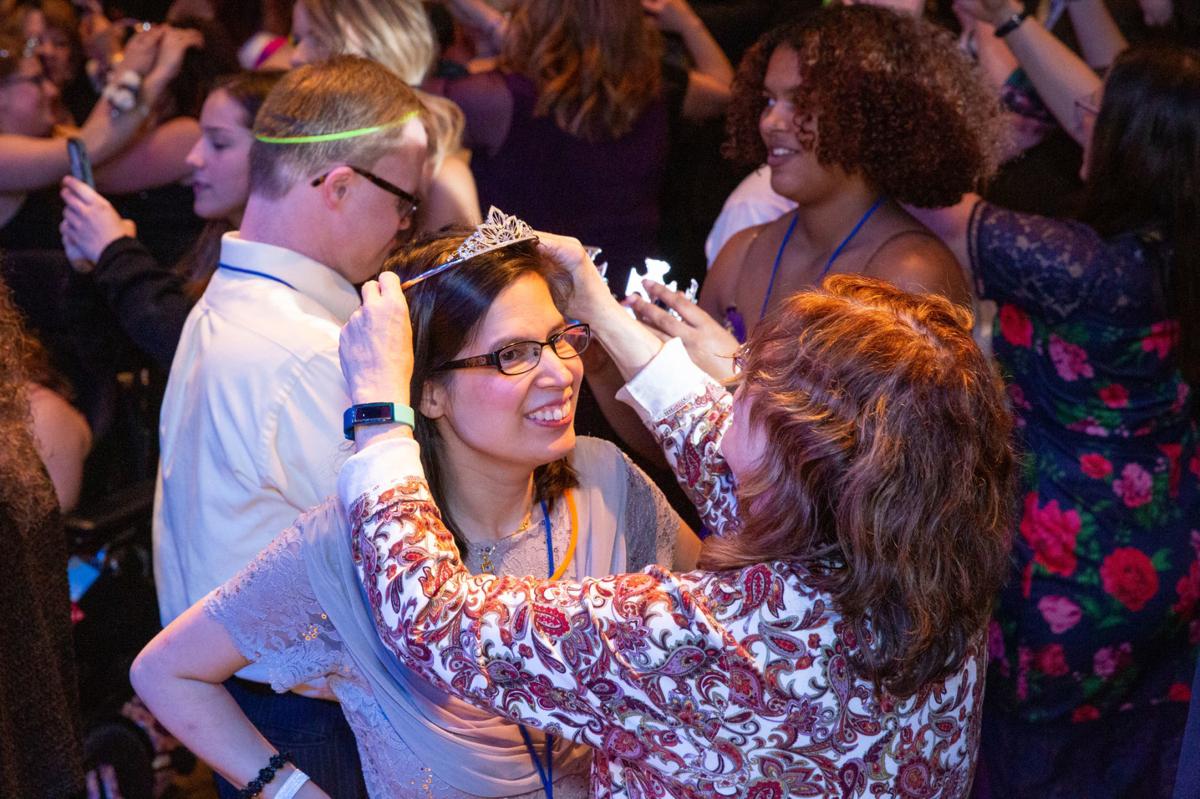 Carol Alexander receives a crown during Night to Shine, an annual celebration sponsored by the Tim Tebow Foundation. 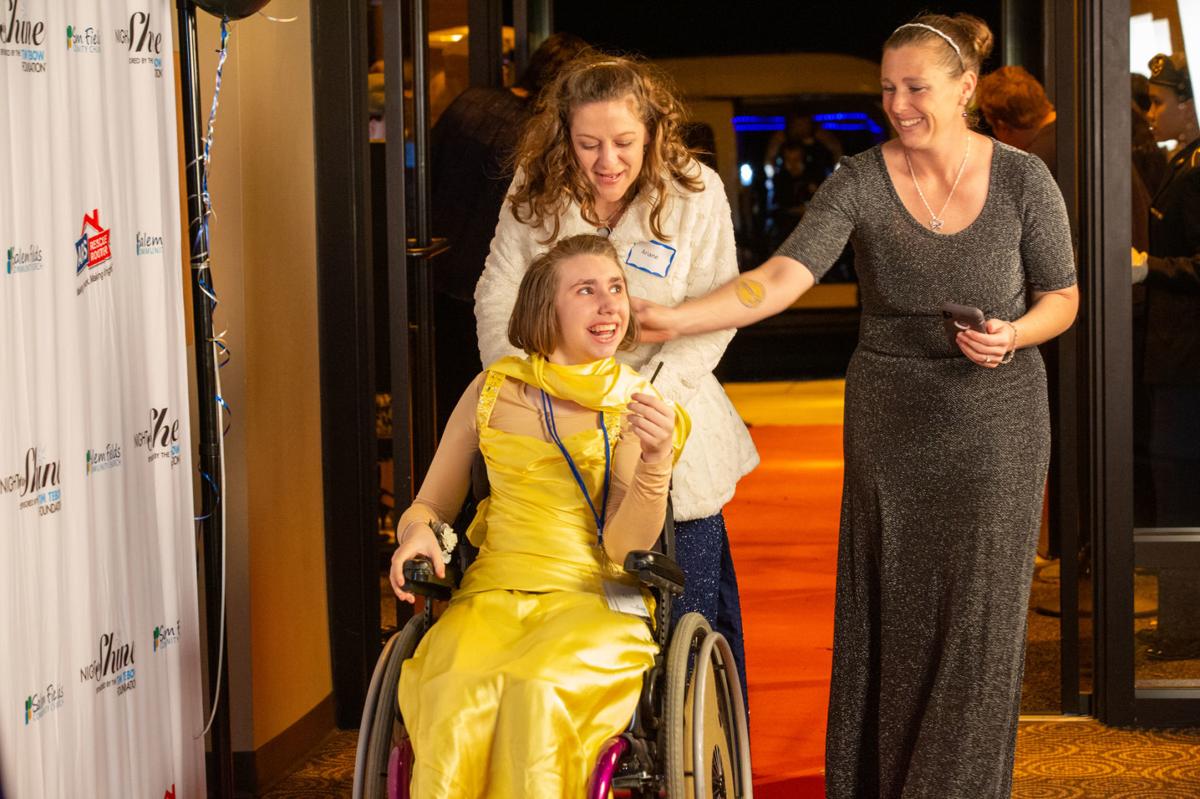 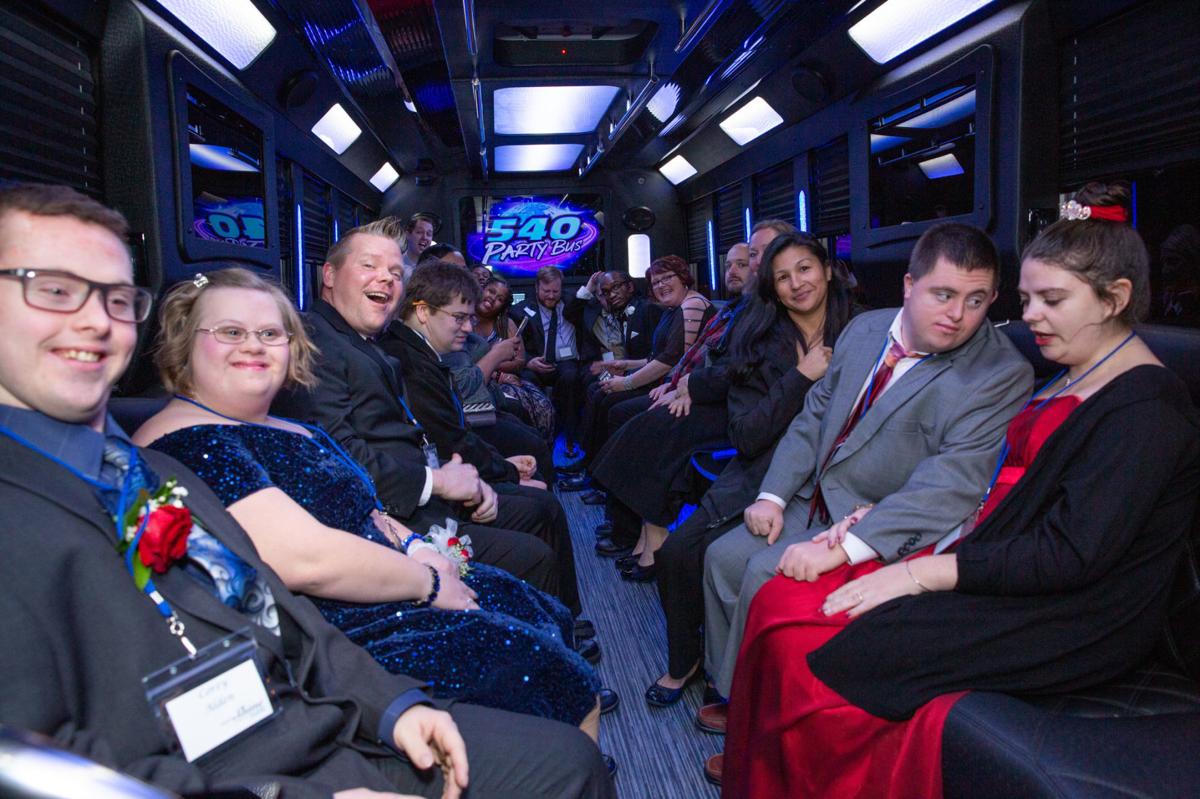 Decked-out prom-goers kick off festivities with a ride around the church on a party bus. 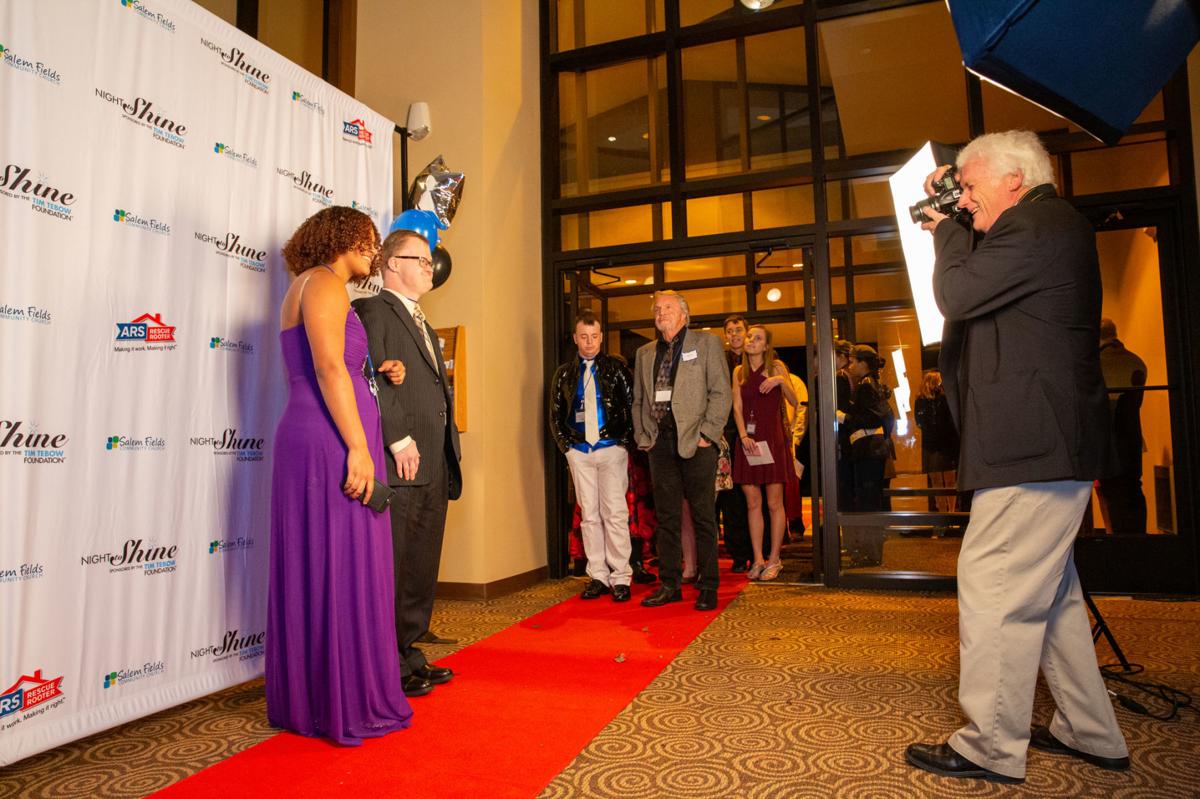 Attendees wait to have their photo taken after walking the Night to Shine red carpet. 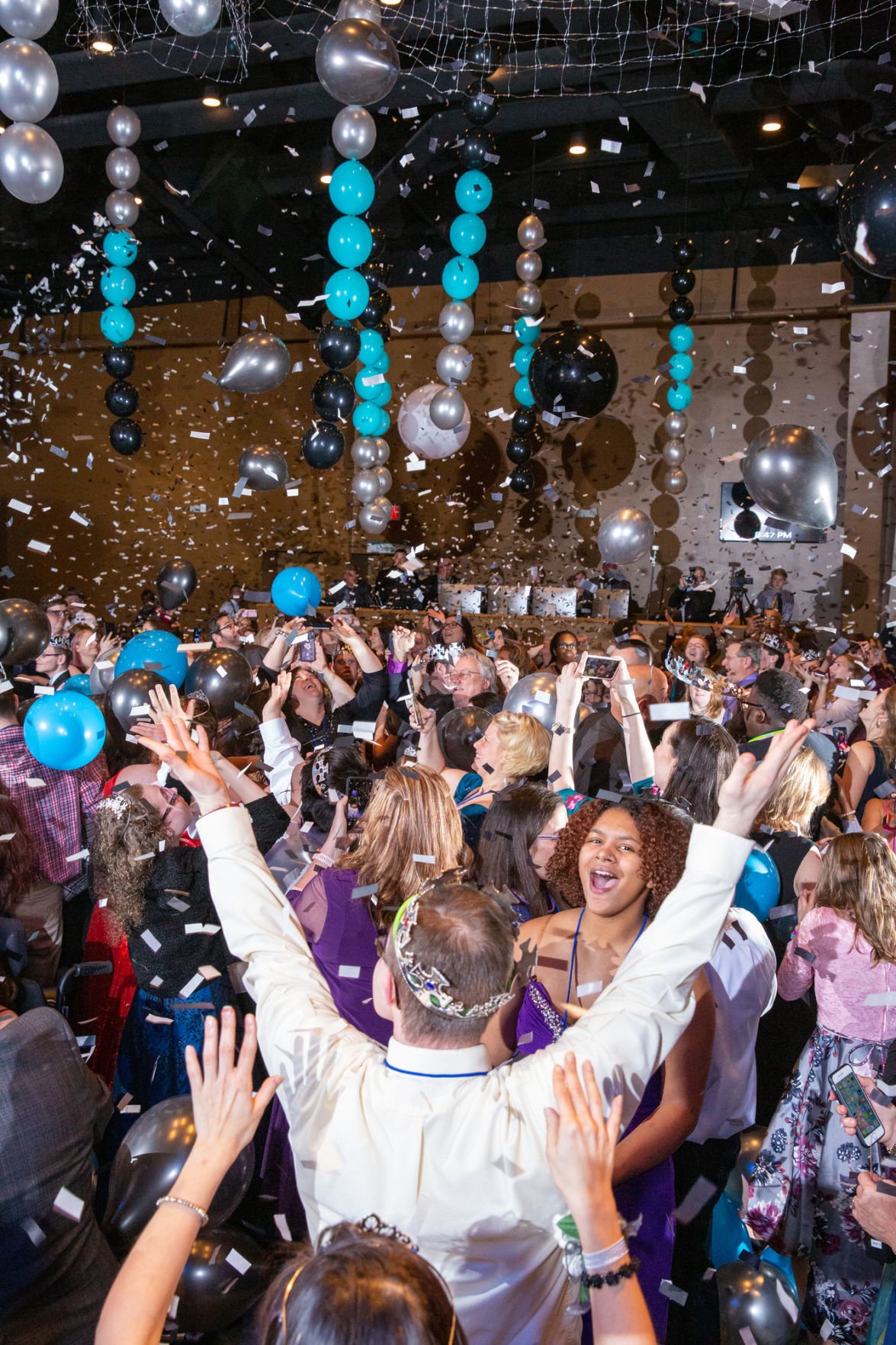 The dance floor is crowded with celebrants when each is crowned king or queen near the end of the party. 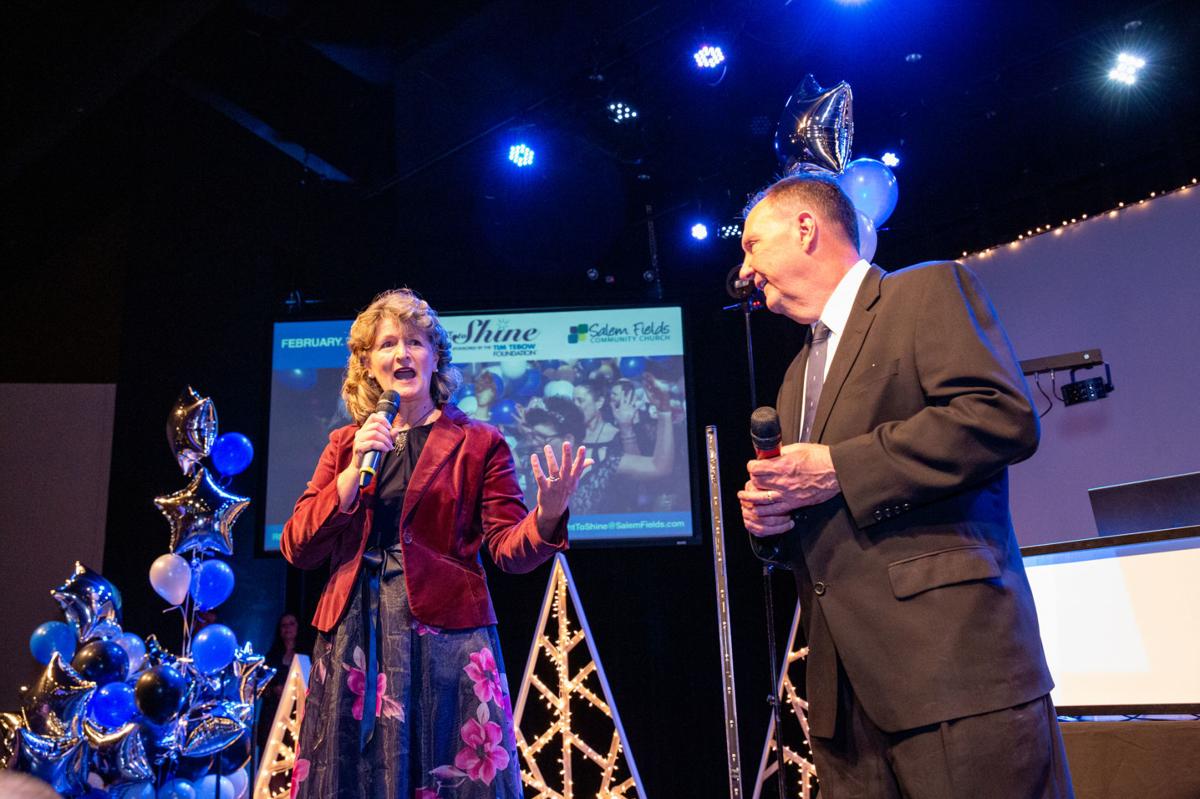 Pastors Gaye and Buddy Marston speak before introducing a video by Tim Tebow Foundation during the Night to Shine event at Salem Fields Community Church. (Sabrina Vaz-Holder for The Free Lance-Star)

Prom-goers arrive to a red-carpet welcome and a salute from JROTC cadets at Salem Fields Community Church on Friday.

Katie Adkins dances during the Night to Shine at Salem Fields Community Church. (Sabrina Vaz-Holder for The Free Lance-Star)

The crowd sings and dances to ‘YMCA’ at Salem Fields Community Church on Friday.

Carol Alexander receives a crown during Night to Shine, an annual celebration sponsored by the Tim Tebow Foundation.

Decked-out prom-goers kick off festivities with a ride around the church on a party bus.

Attendees wait to have their photo taken after walking the Night to Shine red carpet.

The dance floor is crowded with celebrants when each is crowned king or queen near the end of the party.

Pastors Gaye and Buddy Marston speak before introducing a video by Tim Tebow Foundation during the Night to Shine event at Salem Fields Community Church. (Sabrina Vaz-Holder for The Free Lance-Star)

As balloons drifted down from the ceiling and pieces of confetti—along with cheers—filled the ballroom, 135 newly crowned prom “kings” and “queens” reveled in the moment.

She was one member of the monarchy at Salem Fields Community Church’s Night to Shine, an annual celebration for those with special needs, sponsored by the Tim Tebow Foundation. Friday was Salem Fields’ third year to host the event, and the church pulled out all the stops to make the participants feel like royalty.

Adkins, 30, was paired with a “buddy,” Debbie Bartley, and the two had a grand time before the party even started. At various stations manned by volunteers, Adkins had blush applied to her cheeks and silver butterflies clipped to her hair. She was so excited that she got to keep the hair accessories.

Then, as other ladies waited for their turns and gentlemen stood in line to get their shoes shined, Adkins and Bartley boarded one of the waiting limos. They rode in the “party bus” around the Spotsylvania County church—where Adkins danced the whole time, according to her buddy—then were delivered to the entrance.

There, an announcer called out each person’s name as participants walked, or were pushed in wheelchairs, down the red carpet amid a chorus of cheers. Students in the Army JROTC program from Spotsylvania high schools raised their swords in the chilly night air while the waiting “paparazzi” snapped photos.

Then, participants were ushered to a formal photo shoot, then a tabled filled with corsages, then under the archway of teal-and-black balloons and into the waiting sanctuary, which had been turned into a glittering ballroom.

“This is gorgeous,” Adkins said as she fired off a dozen questions to her buddy. She wanted to know about everything from the big lighted balloons suspended from the ceiling to wondering if lemonade was available and what was in the goodie bag she’d get to take home.

Friday was Adkins’ first time at the party—and she stayed front and center during most of the dancing, especially when DJ Bill Carroll of B 101.5 FM pointed out that she knew all the dance moves to “Thriller.”

But as he said later, it didn’t really matter what he played for the enthusiastic crowd. “The happiness just radiates from this room,” Carroll said, “and that’s what I love.”

The same atmosphere brought out Priscilla Click, who enjoyed her third year as a prom buddy. “The smile, the joys, the good time,” she said. “It’s like a true party.”

And it’s one of the reasons Salem Fields likes to bring together, not just volunteers from its congregation, but about 300 people, businesses and groups from throughout the community to help with the event, said Bobby Gagnon, the church’s children’s pastor.

“It’s people from all backgrounds, political beliefs and religious beliefs coming together for the common good to treat every single participant with compassion and love,” he said.

The Tebow Foundation has held Night to Shine for seven years, always the week before Valentine’s Day, and the 2020 celebration included 721 churches across the United States and in 34 countries. The foundation gives each host a $2,000 grant, but Gagnon said it cost Salem Fields $13,000 to pull off its event, and that’s why partnering with businesses and individuals was so vital.

Not only did every participant get the royal treatment—gold or silver tiaras for the queens and jeweled crowns for their kings—but their parents were able to have a night’s respite. They were shuttled to a room filled with ping-pong tables and pool, pizza, chicken nuggets and free massages. Those who wanted a quieter evening could watch a movie.

In the past, the church got about 30 gift cards and baskets, which they raffled for the parents, but for Friday’s event, Gagnon’s corps of volunteers rustled up enough donations so every parent took home a gift.

Participants in the event—for those ages 14 and older—could spend the night on the dance floor, sing karaoke or play games. If there was a common theme, beyond the VIP treatment, it was that fun was more important than playing by the rules society usually demands.

For instance, in the karaoke lounge, no one cared if the singers were off-key, didn’t know the words or didn’t even finish the song. One young man had crooned all he wanted of “The Yellow Rose of Texas” and simply walked off the stage long before the song ended.

Jodie Mueller, a church employee, sat at a table in the back of the lounge and kept clapping as the song continued without a singer.

“Karaoke’s the best because you never know what you’re going to see or hear,” she said.

Then, on a more serious note, she said it’s hard to put into words how meaningful it is to see people enjoy themselves, on their own terms, surrounded by those who want nothing more but for the prom-goers to have a good time.

“I cry every time,” Mueller said.

In the game room, no one quibbled when contestants stood right over the cornhole board and dropped their bean bags into the target. Likewise, they cheered at every accomplishment.

When Brianna Brown, 29, played Tic-Tac-Toe on a large wooden board, Carol Valencik, her buddy, said she was worried that Brown was going to get her by lining up a row of blue X’s. When Brown completed the mission, applause erupted.

Brown responded as if she was giving an acceptance speech.

But participants really had their night to shine on the dance floor. Some sprinted, hopped and skittered around without the slightest inhibition. Spencer Bolthouse wore a neon green glow stick on his forehead and busted one move after another. He morphed from a robot—or was it a mannequin?—into clips from the twist, the swim, the funky chicken and everything else in between.

Joe Jenkins, another buddy on the dance floor, took out his phone and recorded Bolthouse’s moves.

“Yes, I am,” Bolthouse answered without a moment’s hesitation.

He gave a similar response when he picked up his photo, printed earlier and put in a black frame decorated with “Prom” and various curls and loops.

“I look cool,” he said, showing it off. “Got my brother’s good looks.”

Meanwhile, a young man with Down’s syndrome enjoyed his own version of rhythmic movement. He sat in the middle of the dance floor and rocked back and forth. Most times, he moved his upper body, but occasionally he leaned back and brought both feet up and down.

No one fussed, looked at him funny or told him to get up. A woman sat down on the floor beside him for the whole evening, and rocked along, while others kept dancing around him.

Scenes like that made Kelly Saunders smile as she took pictures of her daughter, Kiersten Collins, enjoying a night out with her friends.

“You can see music moves all of them,” she said, glad that the Salem Fields dance floor was one place the participants could move any way they liked. “It’s a judgement-free zone.”