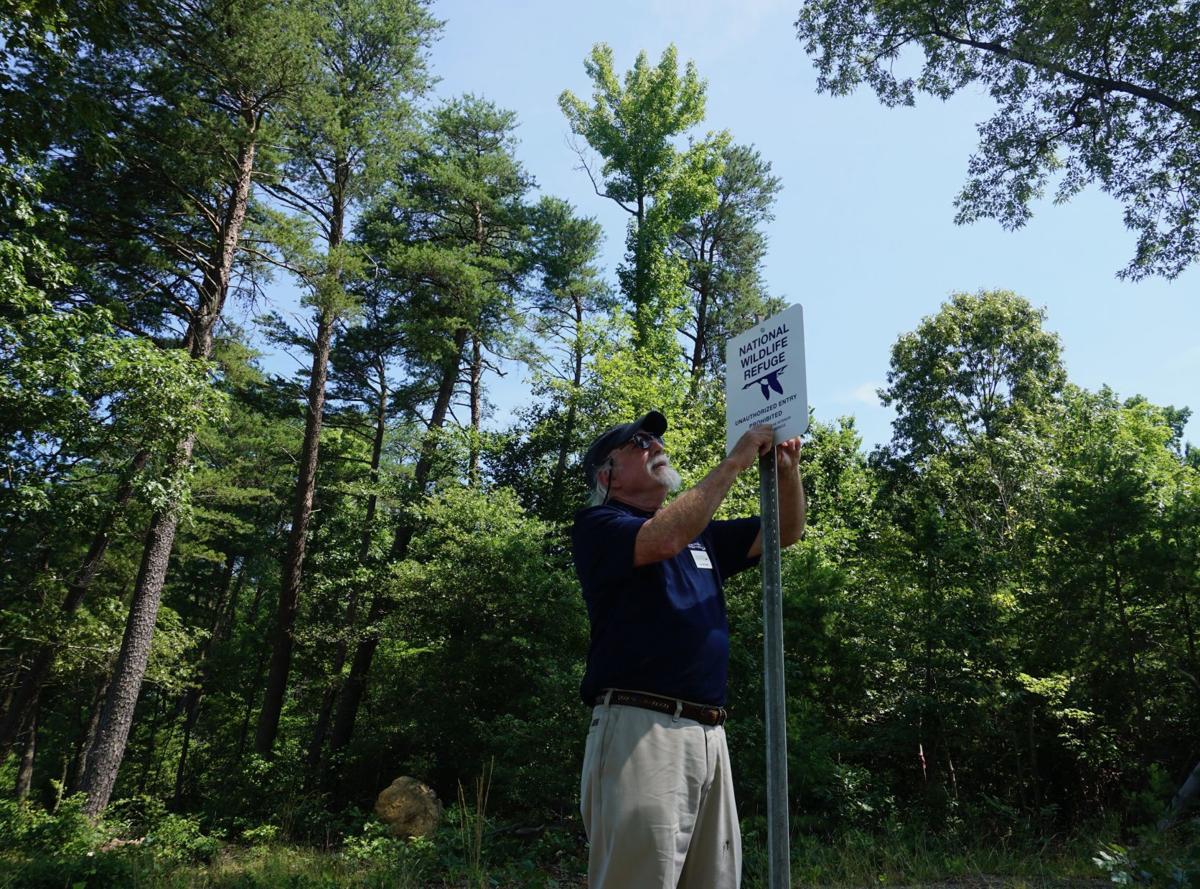 Joe McCauley installs a boundary marker on Fones Cliffs, marking the tract as part of a refuge.

A panoramic view of the Fones Cliff tract being added to the Rappahannock River Valley National Wildlife Refuge. 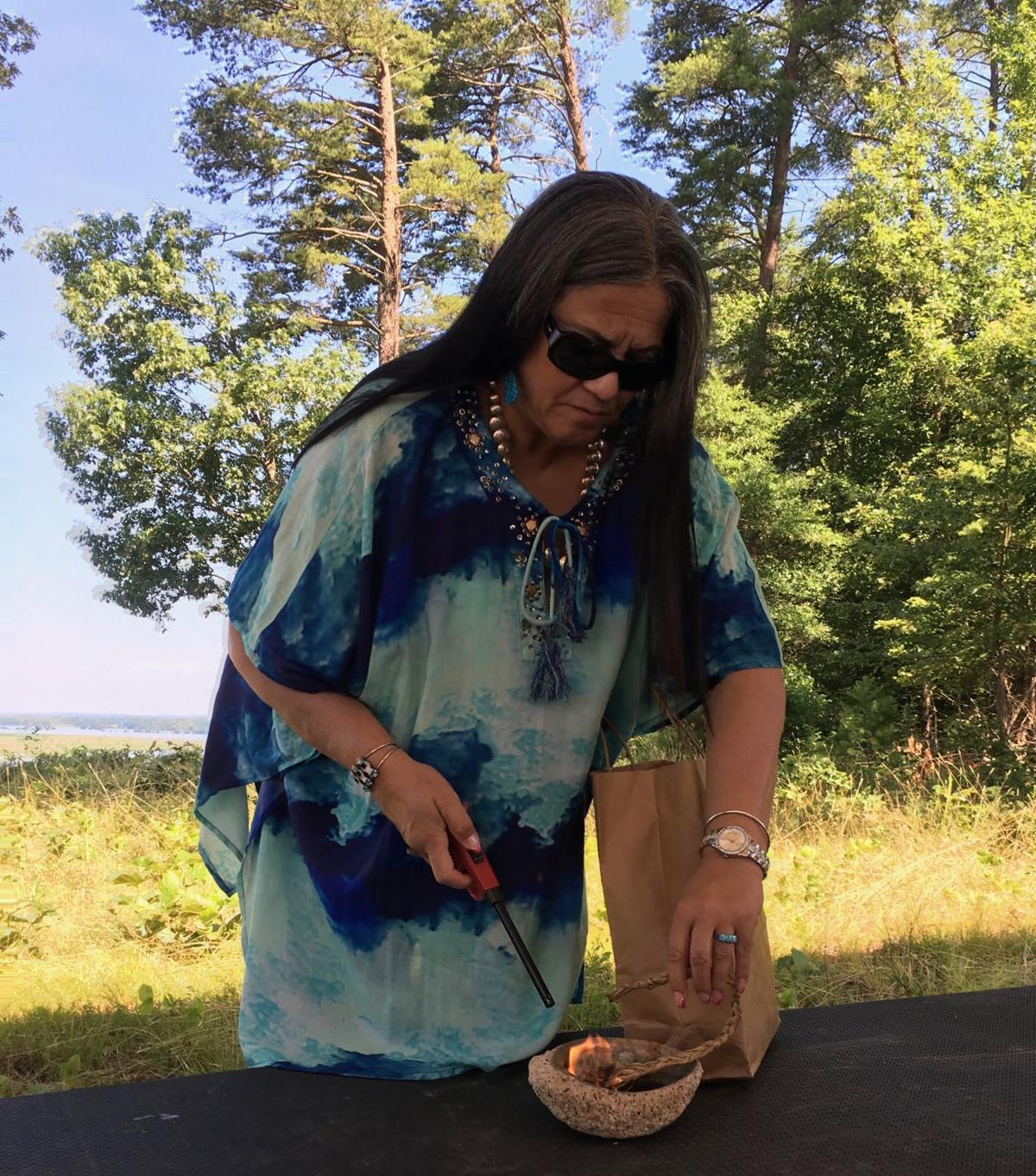 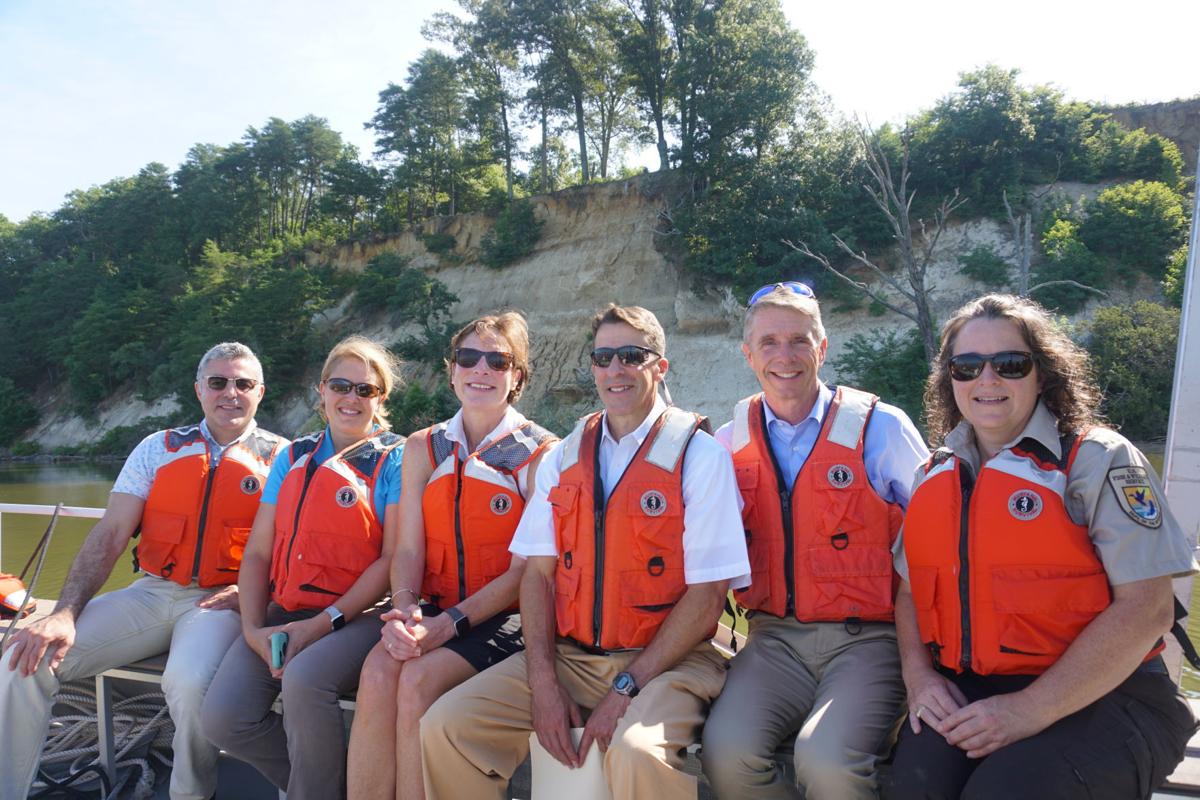 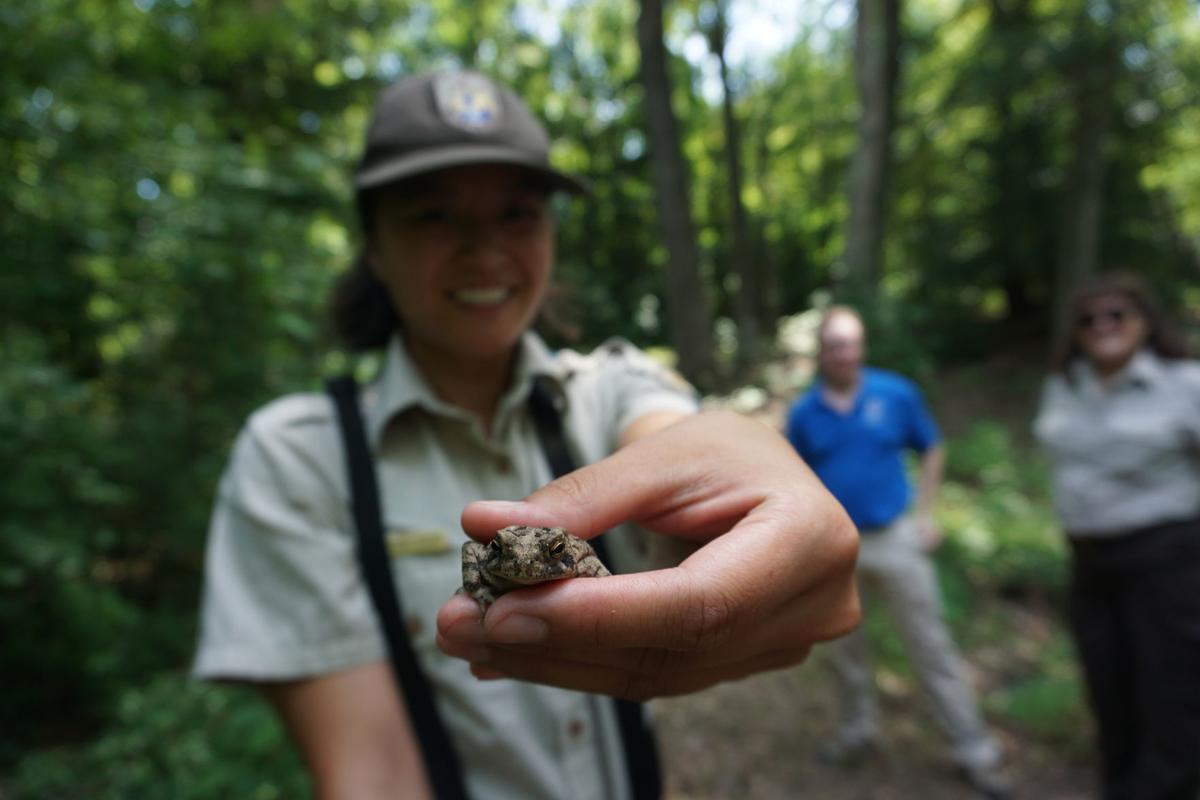 Biologist Lauren Cruz shows off a toad during a tour on Fones Cliffs.

Joe McCauley installs a boundary marker on Fones Cliffs, marking the tract as part of a refuge.

A panoramic view of the Fones Cliff tract being added to the Rappahannock River Valley National Wildlife Refuge.

Biologist Lauren Cruz shows off a toad during a tour on Fones Cliffs.

FONES CLIFFS—With the majestic sweep of the Rappahannock River behind him, Rep. Rob Wittman didn’t need help to celebrate the preservation of 252 historically and environmentally important acres here.

But just as he was getting into the meat of his message—about how three vibrant Native American settlements had been on this stretch of the river, and how it was also where Capt. John Smith first came into contact with the Rappahannocks—the congressman who helped secure the funding got an assist Friday morning when a bald eagle lazily flew by.

“Yep, and there’s the eagle, right on cue,” the 1st District congressman quipped to the group that included everyone from members of the Rappahannock Tribe to key conservation fund folks, with some federal employees and locals mixed in.

Putting pep in the step of the pro-conservation crowd was the fact that the Richmond County riverfront parcel once slated to become 45 building lots will now be preserved in perpetuity as part of the Rappahannock River Valley National Wildlife Refuge. That means protection for part of the stretch on the river that, during parts of the year, has one of the highest concentration of eagles on the East Coast.

Before, during and after the ceremony held near the edge of the cliffs that rise up some 100 feet above the river, there were two main narrative threads.

The main focus was congratulations and salutations to everyone who’d played a part in what many described as a struggle that played out over more than a dozen years to acquire and protect the land.

Tangential talk included the belief that the inclusion of the 252 acres in the federal wildlife refuge can’t help but make it easier and/or more likely that adjoining properties along Fones Cliffs might eventually be preserved and added to the refuge.

The adjoining property that gets the most attention in those discussions is a 964-acre tract planned as a residential and recreational development by a New York-based corporation, Virginia True, which recently filed papers to reorganize under Chapter 11 bankruptcy protection.

That company’s development plan for the cliffs has been controversial since the start. Environmentalists and conservationists opposed a 2015 rezoning of the property because of the cliffs’ importance to a large population of bald eagles, local commercial watermen and the historic significance to the Rappahannock Indian tribe.

At different times, the development was to have included everything from a golf course to a hotel to a collection of condominiums.

In other remarks Friday morning, Larry Selzer, the president and CEO of The Conservation Fund, said that the partners involved in the acquisition of the property for the refuge had done something “profoundly important” by protecting it. The property was acquired from its private owner by the Conservation Fund and transferred to the U.S. Fish and Wildlife Service using $3.96 million from the Land and Water Conservation Fund.

Selzer said he was blown away by the property the first time he visited.

“You look out over river, see eagles fly back and forth, hear the songbirds in the trees, and you get a real sense of place here,” he said, noting that opportunities like that are “critical in how we define ourselves as Americans.”

Anne Richardson, chief of the Rappahannock tribe, burned some sage before the dedication ceremony, and told those assembled that it was truly a great day for the tribe and for all Americans.

She noted that when the tribe makes a decision, it uses a value system that requires consideration on how that decision will affect things seven generations out. She congratulated those who’d worked hard to acquire the largely wooded tract atop the cliffs, saying that it was also the sort of action that extends for generations.

“People will be able to come to this special place, and spend time doing things recreational, cultural and spiritual. I consider it a national treasure,” she said, noting that the tribe would like to see an “indigenous culture conservation learning center” eventually developed on the property.

Wendi Weber, the director of the U.S. Fish and Wildlife Service’s northeastern region, used her time at the podium to thank a long list of folks in the conservation and government ranks for their efforts in acquiring the property.

No one at Friday’s gathering appreciated the length and up-and-down nature of the push to acquire this new parcel better than Joe McCauley, the former manager of the Rappahannock Refuge. He put in more than a decade seeking to protect it and got to personally finish Friday’s festivities with a ceremonial installation of the parcel’s first boundary marker.

“It means a tremendous amount to me” to see this day finally come, he said. “So many people were involved in it, so many people kept the faith when it would have been easy to give up.”

McCauley noted that he first met with the landowner, Terrell Bowers, in 2004. Bowers had plans then to develop it as a family compound, something that wouldn’t fit with U.S. Fish and Wildlife guidelines.

But he said it was always a priority for the refuge to protect the land, and eventually it worked out.

Though the land is now in the Refuge, it won’t be open immediately. Refuge manager Kendra Pednault said before parts of the new addition can be opened to the public, work needs to be done to improve the entrance road, as well as adding a viewing platform and safety fencing near the cliffs.

For more information, go online to conservationfund.org and look under Latest News and Blogs.