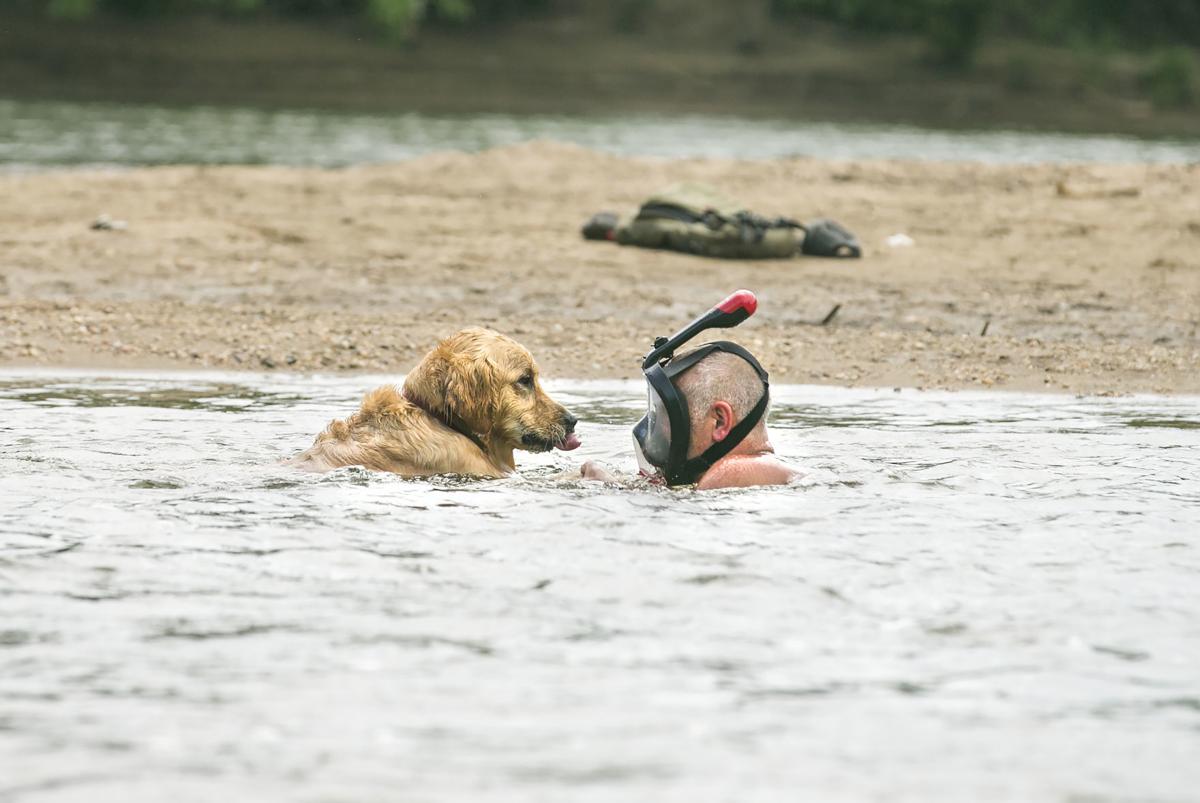 Michael Stockenberg and dog Kirby cool off in the river at Historic Port of Falmouth Park in May. The former recreational area has been redesignated. 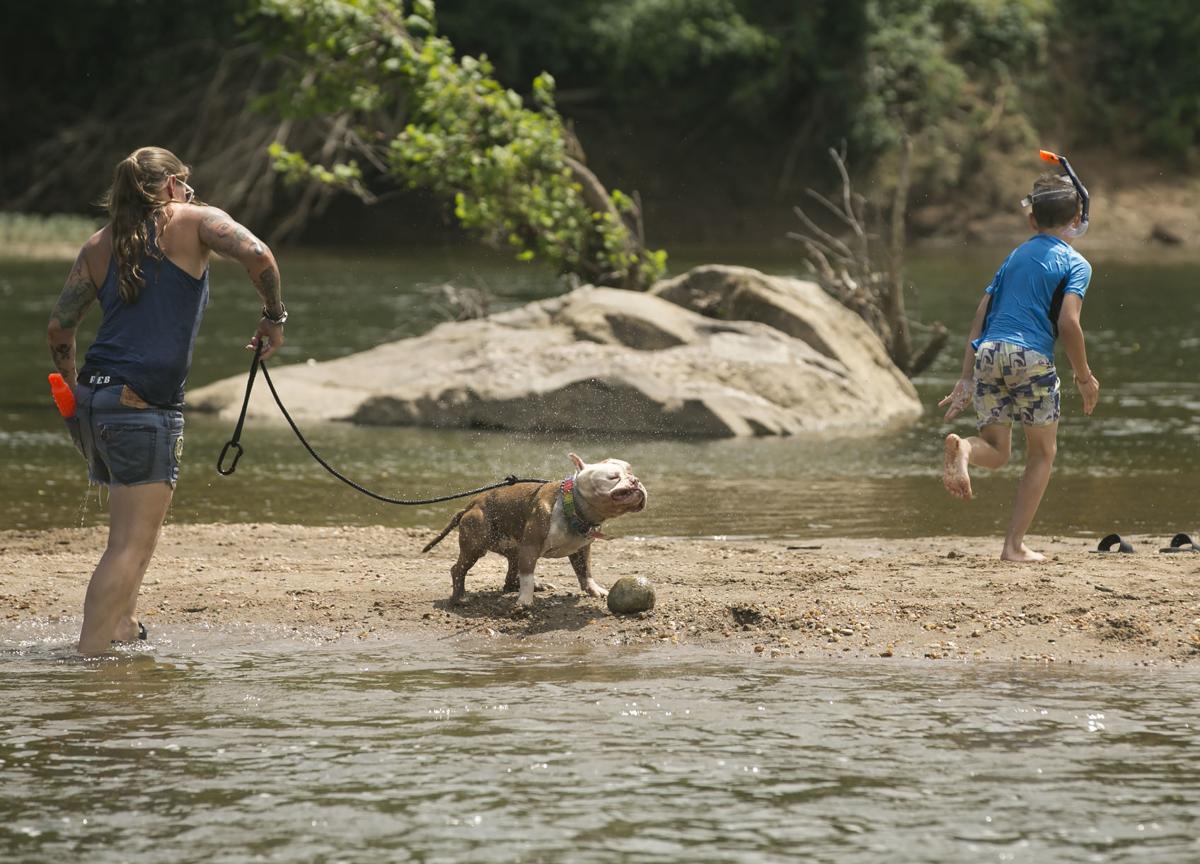 Rhiannon Barreda, dog Timmy and son Gabe enjoy the waterfront at Historic Port of Falmouth Park in May. Stafford County has redesignated the recreational beach as a natural area.

Michael Stockenberg and dog Kirby cool off in the river at Historic Port of Falmouth Park in May. The former recreational area has been redesignated.

Rhiannon Barreda, dog Timmy and son Gabe enjoy the waterfront at Historic Port of Falmouth Park in May. Stafford County has redesignated the recreational beach as a natural area.

The Historic Port of Falmouth is going back to its roots, quite literally.

The decision means the waterfront is now under the care of Mother Nature, as the county no longer plans to remove natural debris or trees, or groom vegetation in the area.

“For now, the area will remain untouched, allowing nature to run its course, with the exception of signs that will be installed to alert visitors that the location is now a designated natural area,” said Michael Morris, county parks and recreation director.

The former park, situated below the Falmouth Bridge along the Rappahannock River, will eventually return to its natural condition. But there is a downside. The park was popular with residents who used the beach during the summer months for parties, family reunions and barbecues. Without Falmouth beach, public access to the Rappahannock in Stafford is limited to the boat ramp at Little Falls.

Adam Lynch, a river steward with Friends of the Rappahannock, believes there’s value in limiting public access to the site, but said the area was never meant to be a public park.

Lynch said that area of the Rappahannock is a depositional zone, where the river naturally deposits sand, silt and logs.

“The river sort of drops things there. It’s natural,” said Lynch. “Sand and logs are part of the natural landscape, but humans have changed things and have destabilized the area.”

As a result of human interaction, Lynch said more debris—including automobile tires and trash—has built up in the area, changing the landscape.

“From people’s perspective, it creates a beach,” said Lynch. “It’s the only large beach along the Rappahannock in the Fredericksburg area and it attracts a lot of people.”

As a natural area, the former park will remain a popular spot for fishermen, who target shad and striped bass. The parking area on the property will remain open to accommodate those using the Belmont–Ferry Farm Trail, or hiking along the river.

“I understand the position the county is in,” said Lynch. “It’s a headache to maintain that site, but there’s a balance to keeping a sensible natural area and providing public access.”

George Washington District Supervisor Tom Coen said the influx of swimmers and cars that have descending on the area in recent years has created excessive traffic, parking problems and other issues.

The county sheriff reported there were several calls for alcohol complaints and violations last summer, as well as 47 other calls to the area, mostly related to parking issues.

“The problem was people using it as a beach going swimming, clogging the area with traffic,” Coen said. “It had gotten out of control.”

County officials also cited high expenses and resources that are poured into the site each year for clean-ups and emergency responses.

Over the last five years, Stafford County Fire and Rescue responded to 21 calls for service in the park, as well as 21 personal assist calls. That added up to 630 man-hours of work for the department, officials said.

The area remains a dangerous place to swim.

“It’s a spot where the water looks calm on the surface, but has a tendency to develop undertows,” said Lynch. “It goes from shallow and calm to deep and fast in just a couple of steps.”

Lynch said as a natural area, it will be important to keep the area accessible for first responders and their vehicles.

“We also want to make sure there’s going to be safety stuff there, like life preservers and signage to let people know there’s a safety issue here,” said Lynch.

The county reports converting the site to a natural area will save about $40,000 annually in staffing costs spent on beach oversight, portable bathroom services, trash removal and debris maintenance.

As summer approaches, the county will closely monitor the area to determine if the progress of natural growth is sufficient to warrant a total removal of staff support at the waterfront.

“Staff may be there to monitor the parking lot, not to supervise the beach area,” said Morris.

Morris said a natural area at the Historic Port of Falmouth will allow visitors to experience natural habitat first-hand and see the Rappahannock as it once was—an uninhibited, free-flowing river.

On occasion debris from the Lauck's Island bridge that fell in 1942? can be seen in the area. That is just one hazard in addition to broken glass, balls of discarded fishing line, and an irregular bottom that is 2 feet deep in one spot and had a 6 foot dropoff right next to it. Add alcohol and a lack of personal flotation devices and first responders will be busy doing body recoveries and resuscitation. Allowing plants (even invasives) to reclaim the bank will cut down on erosion and sediment going downstream. A wild river is not a swimming pool.

Agree - but right across the river at Old Mill, it's the same wild river and debris. So it's interesting to compare the two in terms of how to approach management when there are people using the areas. Are Falmouth Beach and Old Mill comparable?

Hard to really understand what the plan is. If the debris is allowed to accumulate, there will be more than just wood. There will be trash and tires and wildlife including snakes.

If there are going to be people there - there is going to be trash and sanitation issues. Old Mill park across the river also has deposits from the river and similar issues so it's hard to understand how a "let it be" plan is not going to have problems. It's a tough issue, no question but I don't think the "let it be" idea is going to result in satisfaction.