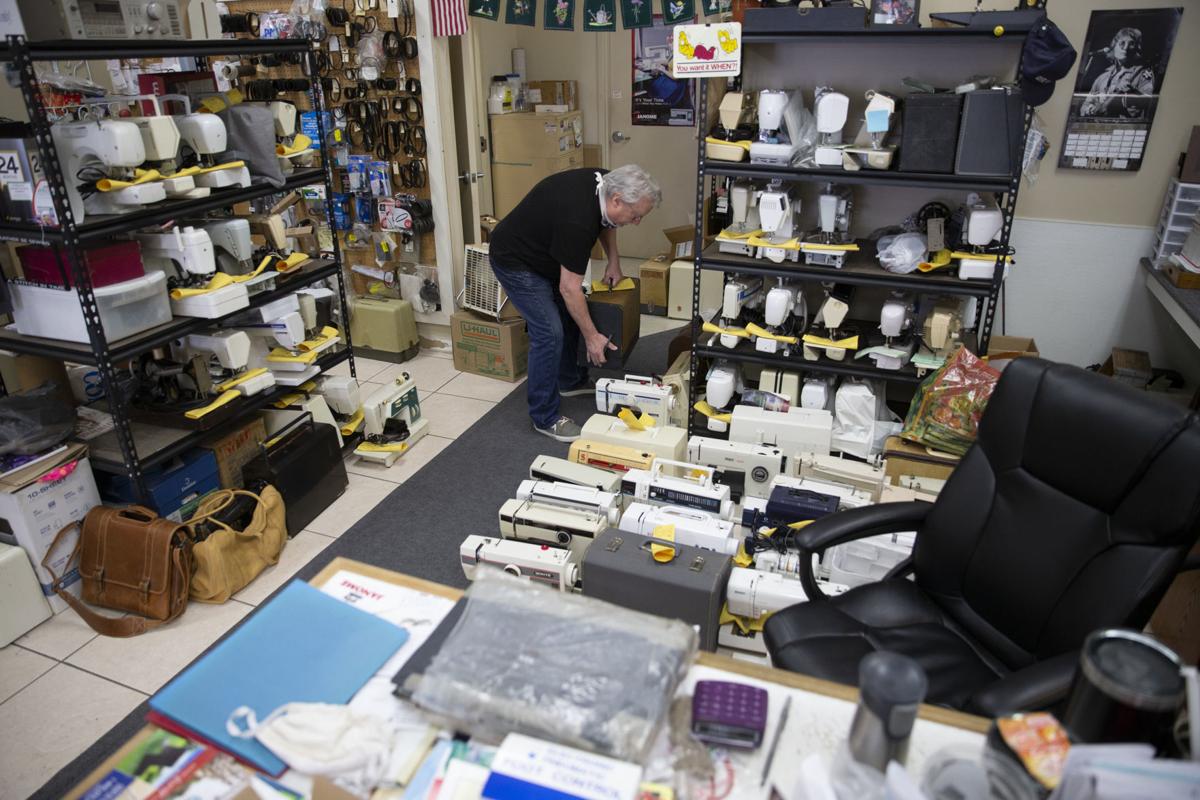 Greg Harding sets down a sewing machine among others that need repairs at A Stitch in Time, his shop in Eagle Village in Fredericksburg. 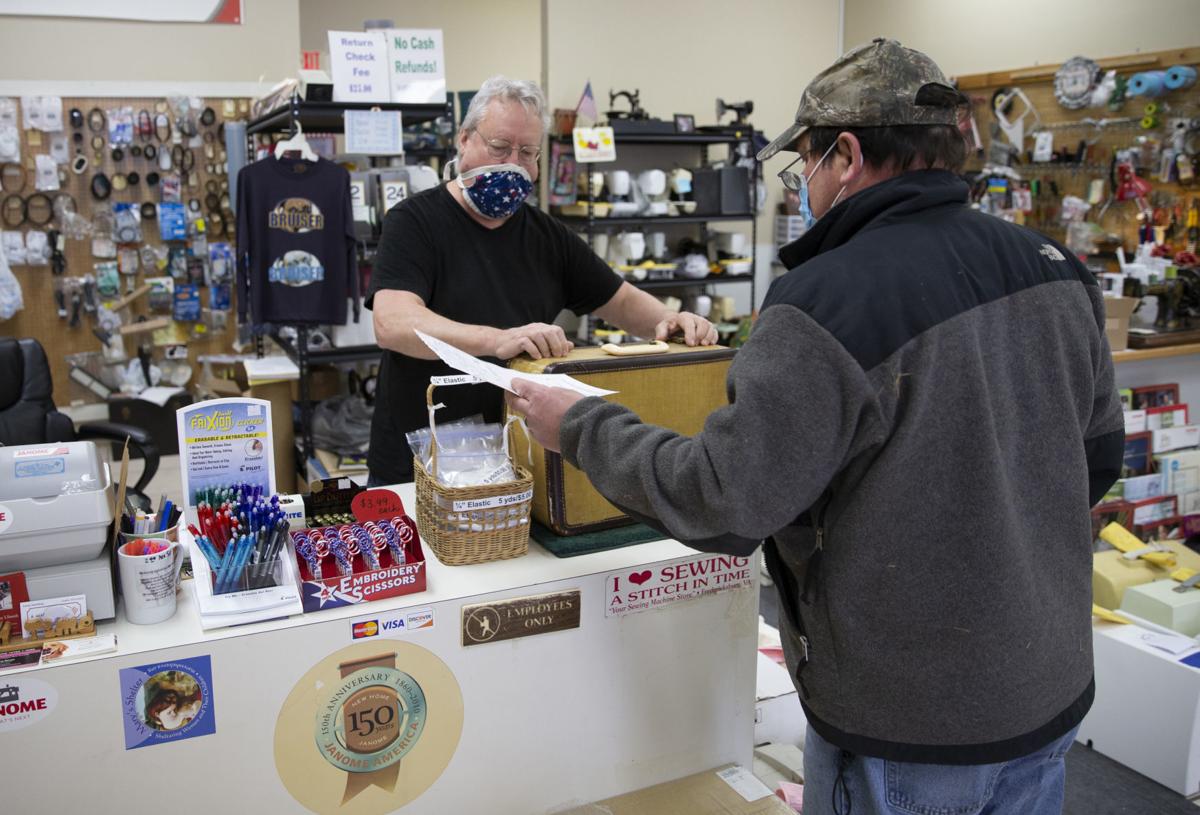 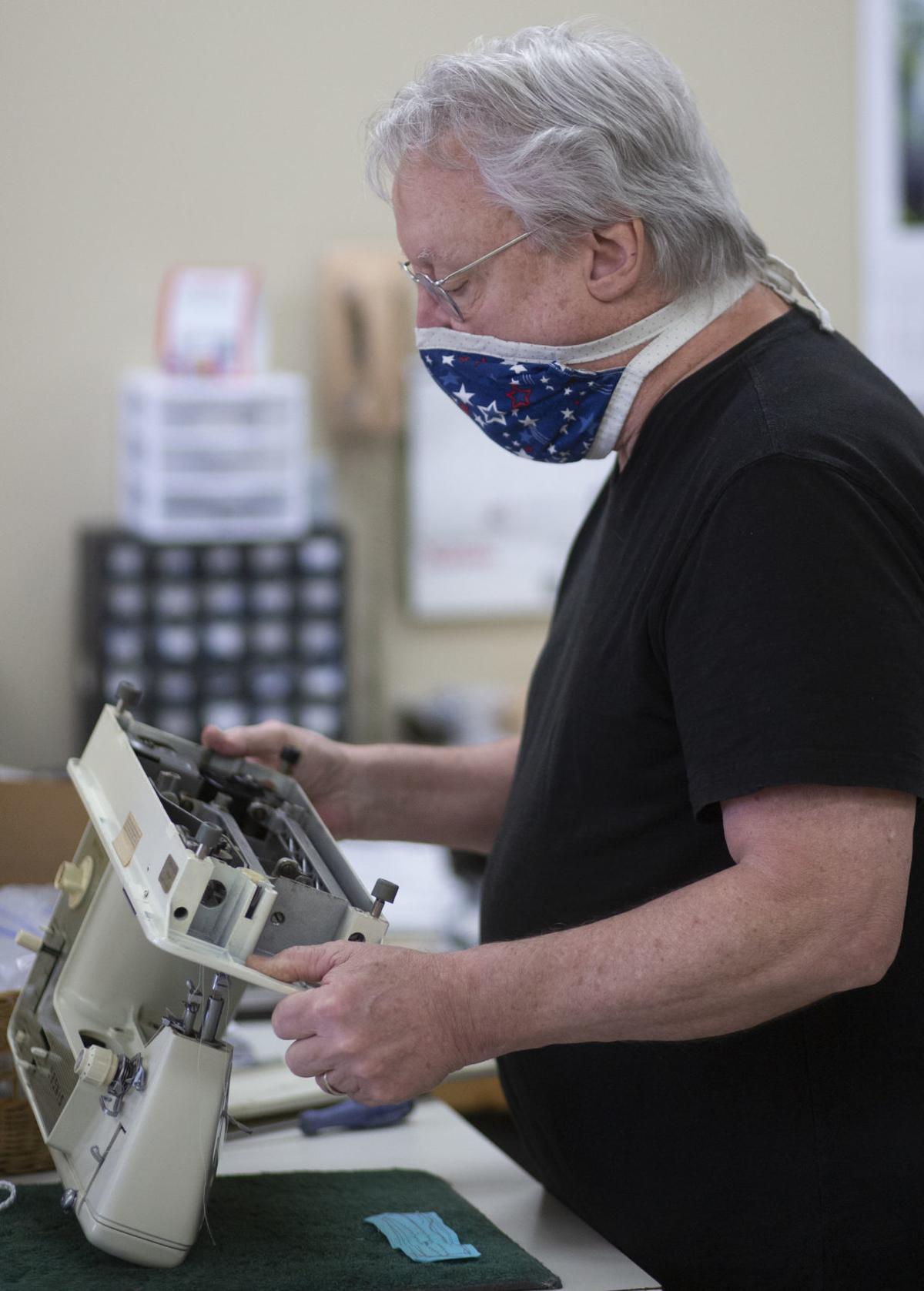 Greg Harding examines a customer’s sewing machine at A Stitch in Time in Fredericksburg, Va. on Friday, May 22, 2020. 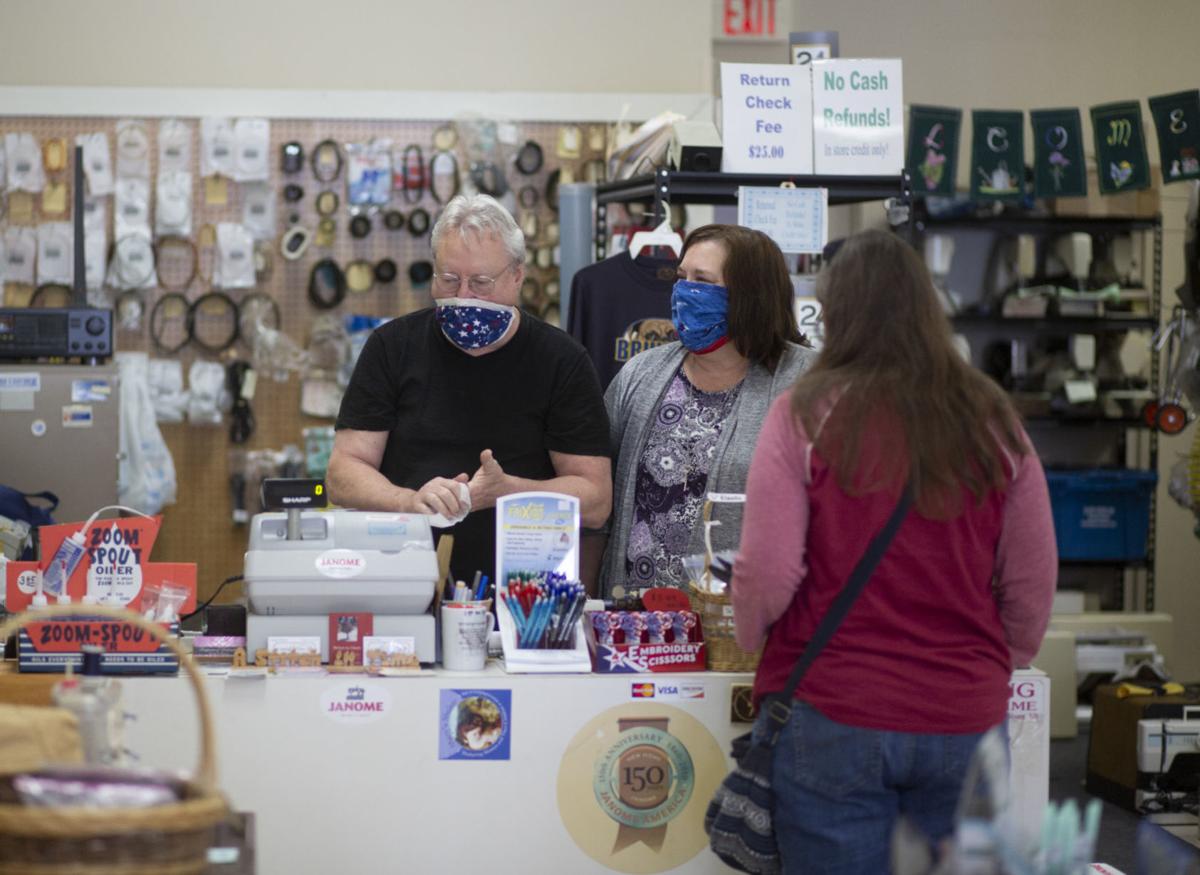 Greg Harding and his wife, Deanna, have had to limit hours at their shop to repair sewing machines. 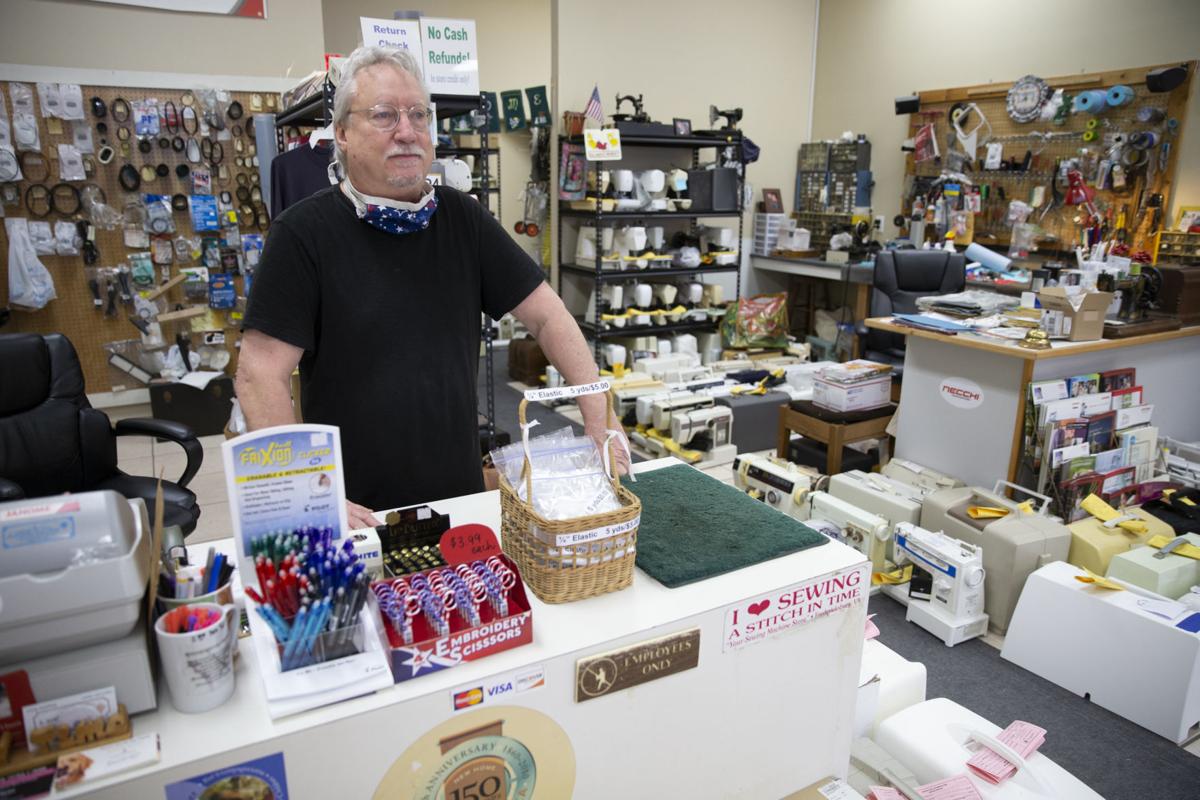 Greg Harding waits for a customer at A Stitch in Time in Fredericksburg, Va. on Friday, May 22, 2020.

Greg Harding sets down a sewing machine among others that need repairs at A Stitch in Time, his shop in Eagle Village in Fredericksburg.

Greg Harding examines a customer’s sewing machine at A Stitch in Time in Fredericksburg, Va. on Friday, May 22, 2020.

Greg Harding and his wife, Deanna, have had to limit hours at their shop to repair sewing machines.

Greg Harding waits for a customer at A Stitch in Time in Fredericksburg, Va. on Friday, May 22, 2020.

Greg Harding has been repairing and selling sewing machines for nigh on 40 years, but has never seen his services in such demand as they are now.

With everyone from novice sewers to accomplished quilters jumping in to make masks for hospitals and first responders, crowds of customers are turning to Harding at his A Stitch in Time store in the city’s Eagle Village Shopping Center.

Some want new machines, some want their old ones repaired. Either way, they all want a working machine, and they want it now.

That’s where Harding’s work in the past month or so has earned him gratitude and admiration for going above and beyond. He and his wife, Deanna, have been putting in 12-hour days—sometimes more—to put the volunteer mask-makers to work as quickly as possible.

Because he’s been burning the candle at both ends, and even closed his shop’s doors to concentrate on repairs, a handful of thankful fans and customers have nominated Harding as a Hometown Hero during the coronavirus pandemic.

The nominations mention Harding’s dedication to put in long, extra hours to repair the machines, willingness to wrestle with older and difficult machines and his kind way of dealing with customers.

Harding said he couldn’t help but be moved by people who have brought all manner of sewing machines in for repairs.

“Everybody has dug out grandma’s machine, Mama’s, or Uncle Fred’s, and they want to make masks,” he said. “It’s ranged from quilters and everyday sewers to others who are just trying to get started and learn to make masks for fire departments, EMS service and others.”

Harding has repaired hundreds of machines since the pandemic hit, and said it became clear early on that business as usual wasn’t going to work.

“We’re running limited hours because I can’t spare the time to talk to customers coming in and still handle the influx of repairs,” he said. “There’s nowhere to walk in here right now, outside of a narrow little aisle. All the shelves are full.”

The machines have come in from all over the state and beyond, with one woman making the 160-mile trip from South Boston.

Deanna Harding said it’s because her husband is good at what he does, and has the patience to figure out how to fix even the oldest and most difficult of sewing machines.

“You can be going along and doing well with different machines until you run into that one that doesn’t want to cooperate,” said Greg Harding. “That’s the kind you pull out hair on and put aside to come back to. Some nights we’ll be here until midnight or 1 a.m. trying to keep up.”

“For some, you’re just replacing parts, and for others you’re dealing with broken gears or something really wrong,” said Harding. “With breaking needles, you have to troubleshoot the problem, oil the machine and try to bring it back to where it should be, tension wise.”

A Hartwood resident and native of the White Oak area of Stafford County, Harding said he’s gratified when customers share what they’ve been able to do with their repaired machines.

“One customer, with family in Brazil, said they made more than 100 and sent them to those relatives. And another woman said she’d made more than 1,000 masks for others,” he said. “I feel a real responsibility to get these machines done so these customers can do these good things. If not, I’m standing in their way.”

He learned how to repair machines by doing it over several decades. Now he’s doing repairs every day, even when the shop’s not open.

“This has always been a steady business, and I’ve been able to eke out a living,” Harding said. “But since the virus hit, it has just been nuts. We’ve sold every used machine I serviced and put out, as well as all our lower-end and middle-of-the-road machines, and have 35 more on back order. But they’re hard to get your hands on now. They’re just not available.”

Columnist Rob Hedelt wants readers to nominate local people they feel are “Hometown Heroes” in the midst of the coronavirus outbreak. He wants to highlight the efforts of those on the front lines of the crisis—be they medical staff or the person stocking shelves in an area grocery store. And also people who are going out of their way to be kind, helpful or making a difference in this tough time.

Nominations should come via email or U.S. mail, to rhedelt@freelancestar.com or to Rob Hedelt, 1340 Central Park Blvd., Suite 100, Fredericksburg, VA 22401. They need to contain the name and locality of the person doing the nominating, and the name and contact information for the person being nominated. It’s necessary to inform the nominated person before sending in a nomination.