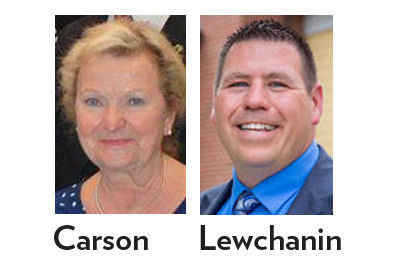 The race for Caroline County’s only contested School Board seat features a pair of career educators who are primarily focused on funding—though they differ on the hows and whys.

Mattaponi District representative Nancy Carson is the only School Board member who faces opposition in the Nov. 5 election. She defeated Jamey Lewchanin with 57 percent of the vote in 2015, but Lewchanin is back this year in hopes of a more successful campaign.

As career educators, both candidates said they have made children’s development key aspects of their lives.

“I am passionate about our schools,” Carson said. “Since being on the board, I have helped to push the bond referendum (which funded the remodeling of Caroline High and Madison Elementary). I have been a part of remodeling Bowling Green Elementary School.

“The most important part of my tenure has been to help bring new leadership to Caroline Public Schools, which has enabled us to have all five of our schools fully accredited.”

Carson, 66, who was first elected in 2011, said her experience makes her the best candidate. In addition to her work on the bond referendum, she pointed to her spearheading of a volunteer program as examples of her dedication to Caroline schools. A retired schoolteacher and administrator who spent more than 30 years working in Caroline schools, Carson continues to volunteer on a weekly basis at the division’s elementary schools.

Lewchanin, 43, ran unsuccessfully for the Reedy Church District seat in 2011, and then again in 2015 against Carson for the Mattaponi District.

His campaign’s main points include improving communication and providing all children with a quality education that will lead to a positive and productive community. He said the board must put students’ needs first.

“It has become apparent to me that improved communication must be the primary impetus of change. The breakdown of communication is allowing these secondary issues to remain stagnant,” he said.

“I believe I have ideas that will be beneficial to the community at large. I also believe that people should have a choice when deciding on who to vote for. I am not a quitter and I fight for what I believe in,” he said.

Other School Board incumbents—George Spaulding Jr. in the Bowling Green District, Shawn Kelley in Madison, Jowanda Rollins–Fells in Reedy Church and John Copeland in Western Caroline—are running unopposed for reelection. Calvin Taylor is the only candidate seeking the Port Royal District seat being vacated by Tinka Harris, who is not seeking reelection.