Perryn Miller, 8, cuddles his dog Frank in Salt Lake City. Miller, whose extended family is from Spotsylvania, is undergoing treatment for brain cancer in Salt Lake City. A Caroline man volunteered to drive Frank 2,300 miles across the country so the dog could provide emotional support to the boy. 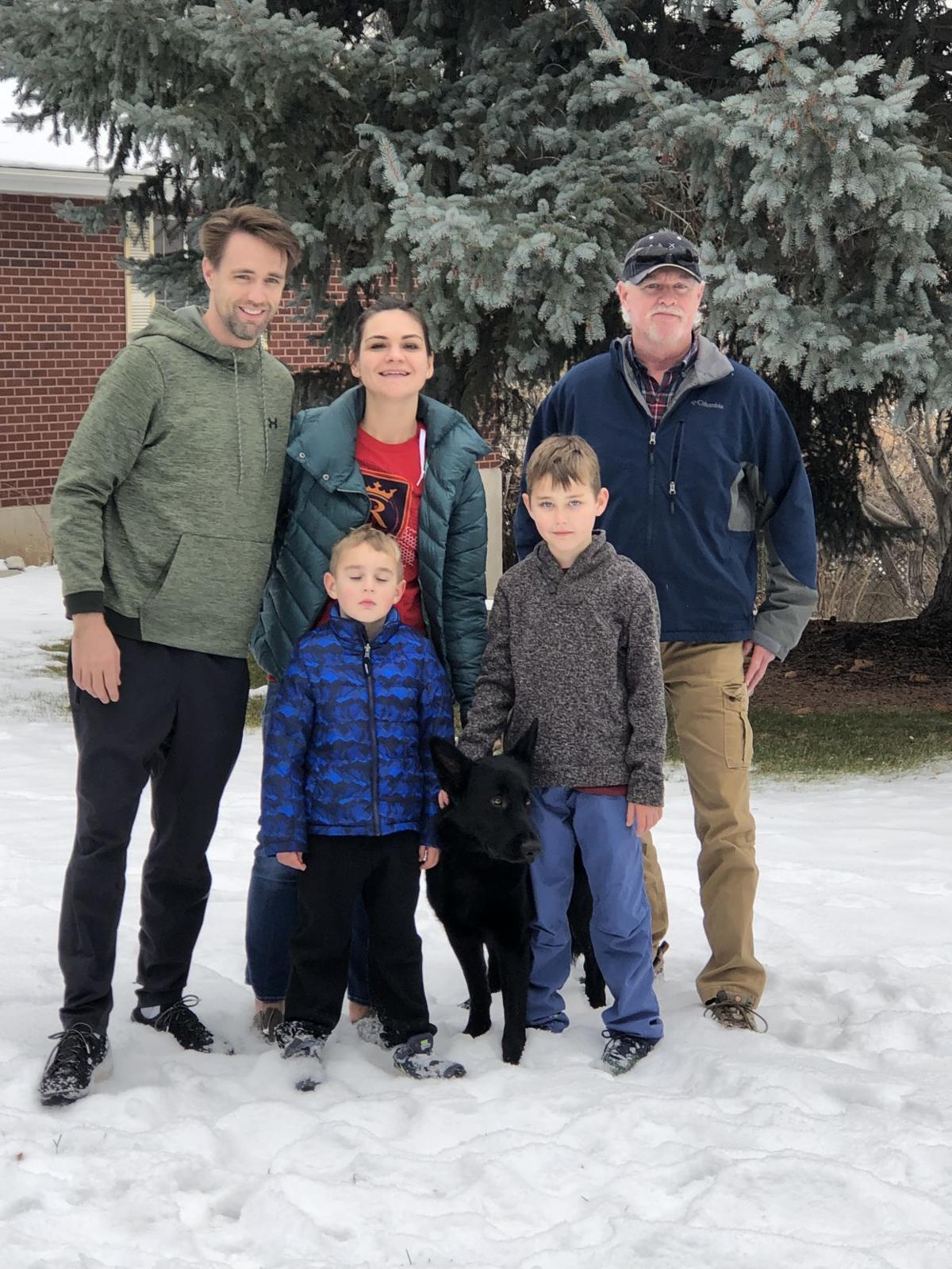 Perryn Miller (in grey coat) poses with parents Jake and Jaimee, brother Rayner, dog Frank and Bob Reynolds. Reynolds, of Caroline, volunteered to drive Frank across the country to be with Perryn as he undergoes treatment for brain cancer. Reynolds did not know the Miller family before.

Perryn Miller, 8, cuddles his dog Frank in Salt Lake City. Miller, whose extended family is from Spotsylvania, is undergoing treatment for brain cancer in Salt Lake City. A Caroline man volunteered to drive Frank 2,300 miles across the country so the dog could provide emotional support to the boy.

Perryn Miller (in grey coat) poses with parents Jake and Jaimee, brother Rayner, dog Frank and Bob Reynolds. Reynolds, of Caroline, volunteered to drive Frank across the country to be with Perryn as he undergoes treatment for brain cancer. Reynolds did not know the Miller family before.

“We need ideas,” wrote Donna Javaras, of Spotsylvania County. “Anybody familiar with transporting dogs? We need to get Frank out to Salt Lake City for Perryn’s emotional support dog. We got a quote of $3,600. There has to be a better way.....anybody know of any services/resources that can assist us in getting him there??????”

Javaras was talking about her 8-year-old grandson, Perryn Miller. While he and his parents, Jaimee and Jake, and his younger brother Rayner were visiting family in Salt Lake City over the holidays, the boy started experiencing terrible headaches.

After a trip to the emergency room, doctors discovered a tumor on his brain and diagnosed him with stage 4 glioblastoma, an aggressive brain cancer.

They operated on Perryn right away. But he is staying in Utah to undergo further treatment, instead of going home to North Carolina.

And the thing he missed most from home was his dog, Frank, an 8-month-old black German shepherd.

Reynolds, of Ladysmith, showed the Facebook post to her husband, Bob, a former long-haul truck driver and summertime ranger at Yellowstone National Park.

Neither Jennifer nor Bob knew the Miller family at all. But Bob said, “I’m available. I can drive Frank.”

The Millers accepted his offer.

“They were thrilled Frank would have companionship on the trip out there,” Bob Reynolds said last week.

“He would sleep or play with his toys,” Reynolds said. “We’d stop and go for walks. If he wanted to use the bathroom, he’d bump my right arm. He was perfect.

“Frank and I got along very well,” he continued.

The two car-camped both nights of the 2,300 mile trip, with Frank taking up the back seat of the Subaru.

Reynolds posted pictures of Frank on social media as the pair made their way across the country.

“A rare treat for Frank, he got to see the Gateway Arch in the distance and the McDonald’s arch at the same time,” Reynolds posted from St. Louis.

In Cheyenne, Wyo., Frank got to play in the snow for the first time.

And on Jan. 5, Frank and Reynolds pulled up to the house in Salt Lake City where the Millers were staying.

“No one was waiting outside,” Reynolds said Wednesday, speaking by phone from somewhere on the West Virginia Turnpike, on his way home from Utah. “I took Frank out of the car. He smelled a familiar smell and started pulling me straight to this door he’d never been to before. [The Millers] opened the door and he just went crazy.”

Perryn’s great-aunt, Rebecca Patrick of Fredericksburg, witnessed the boy’s reunion with his pet.

“It’s nice to know that as Perryn begins his treatments so far from home, he has Frank with him for comfort and support,” she said.

Perryn’s cancer diagnosis is the second crisis his family has had to weather in the past few months. In September, their home in North Carolina was destroyed by Hurricane Florence.

His father, Jake, is a veteran Marine Raider now retired on disability. His mother, Jaimee, is a special education registrar. Both parents will be taking extended leave from their jobs to care for Perryn in Utah.

A friend set up a GoFundMe account to help them pay for Perryn’s medical bills.

“We have been overwhelmed and humbled by the outpouring of love and support from friends and strangers all over the country,” the Millers wrote in an email. “To have a stranger offer to drive Perryn’s dog Frank across the country for us, just so one little boy could be reunited with his best friend, showed us that there are selfless people who are caring and willing to jump into action to help others. We are so grateful to Bob for doing this for Perryn and for us.”

Reynolds said he was happy to be able to bring smiles to the Millers’ faces after all they’ve been through.

“It was a good feeling to be able to ease their minds a little bit,” he said. “And I told them that if they need me to, I’ll come out there again to bring Frank back.”