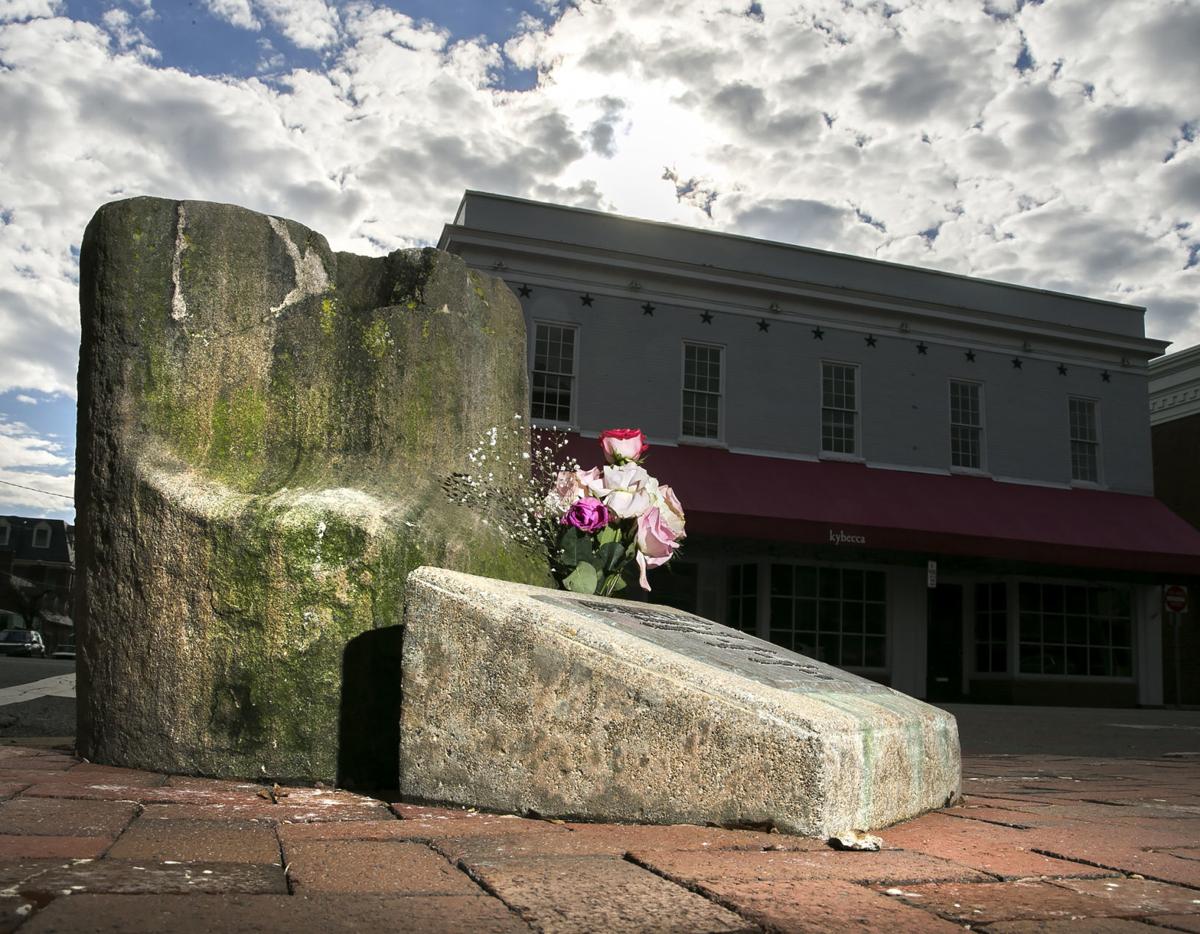 The slave auction block at the corner of William and Charles streets has long been a topic of debate. 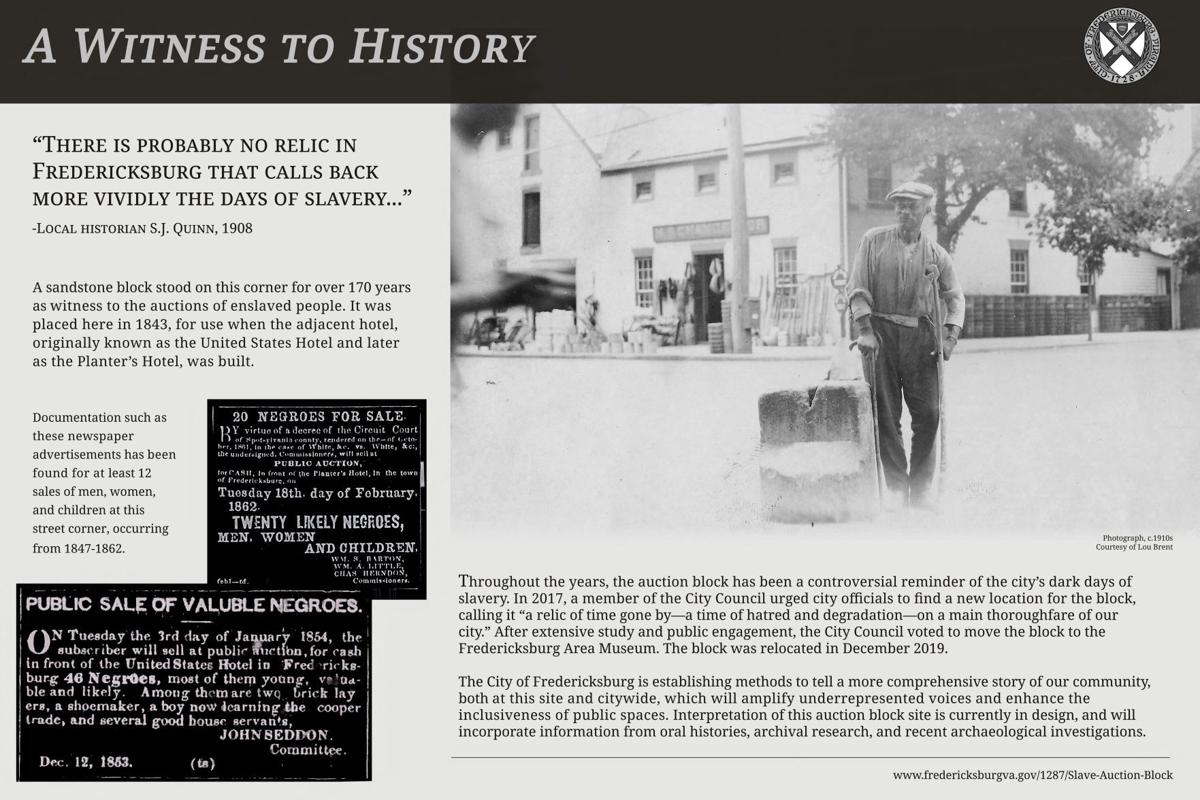 A draft of the signage that will go up at the auction block site says that a more comprehensive version is being created. 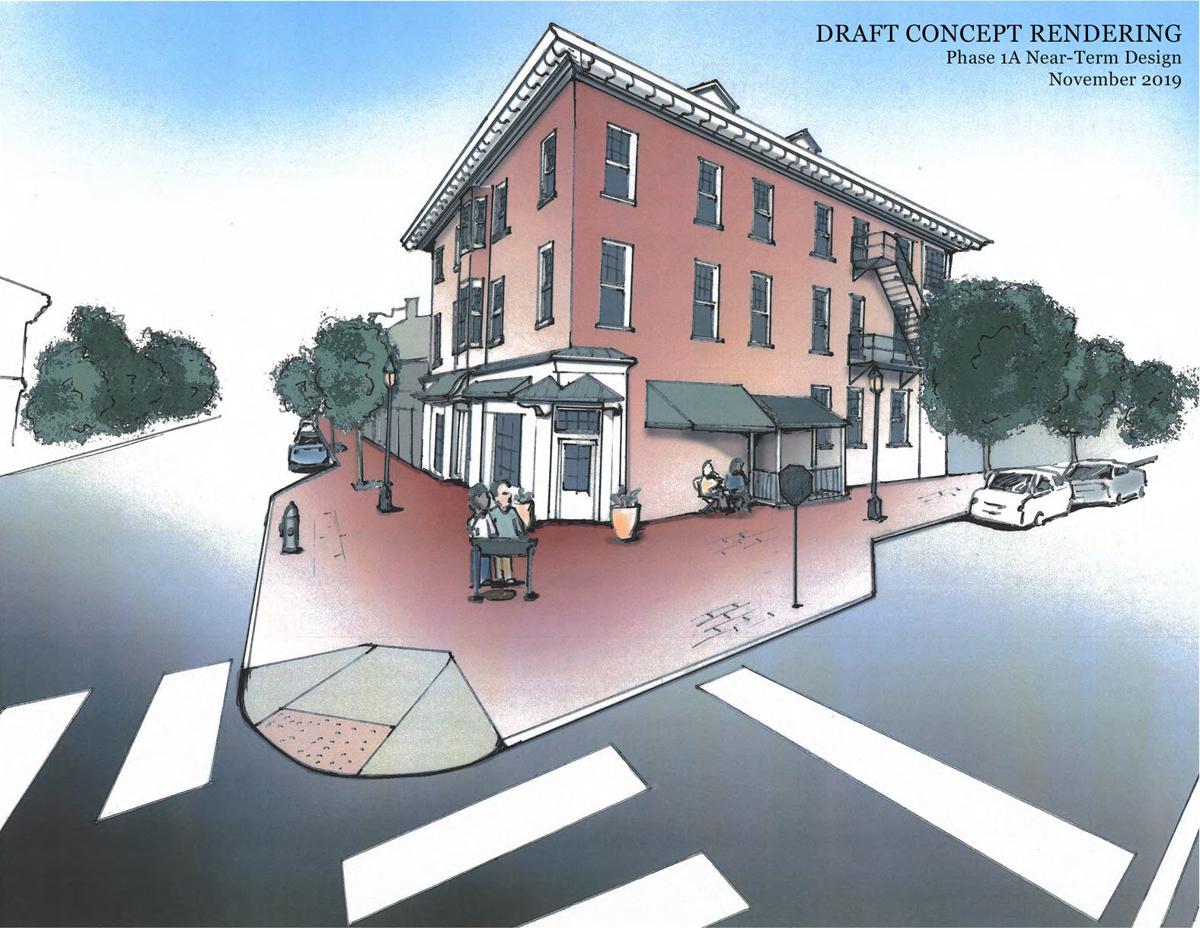 Fredericksburg City Council plans for a wayside panel about the slave auction block to go up in the stone’s place once it is removed. The city has halted its plans for now because of a lawsuit.

The slave auction block at the corner of William and Charles streets has long been a topic of debate.

A draft of the signage that will go up at the auction block site says that a more comprehensive version is being created.

Fredericksburg City Council plans for a wayside panel about the slave auction block to go up in the stone’s place once it is removed. The city has halted its plans for now because of a lawsuit.

Two local companies have filed a petition in Fredericksburg Circuit Court to stop the removal of the controversial slave auction block from the corner of Charles and William streets.

E.D. Cole Building LLC, which owns the commercial building across the street from the auction block at 402 William St., and Local Holdings LLC, owner of the Olde Towne Butcher shop and The Butcher’s Table restaurant at 401 William St., allege they will lose business income from what they predict will be a decline in both foot traffic and tourist visits to the corner after the stone auction block is removed.

The petition, which was filed Dec. 10, argues that City Council violated the Dillon Rule and had no legal authority to order the removal of the auction block and its relocation to the Fredericksburg Area Museum. The petition said only the city’s Architectural Review Board could undertake such an action.

Fredericksburg attorney Joseph Peter Drennan said his clients decided to file because no one had approached either of them before City Council voted 6–1 on Nov. 12 to approve a certificate of appropriateness for removal.

“It’s basically a lawsuit to stop a legally problematical decision by the City Council,” he said. “City Council didn’t have the power to do what it did.”

City Council has directed City Attorney Kathleen Dooley to “vigorously defend this action,” according to Mayor Mary Katherine Greenlaw. Dooley said she is working on the city’s responsive pleadings, which are due Jan. 2.

The Fredericksburg Branch of the NAACP, which was “quite disturbed” by the lawsuit, according to President Charlyne Jackson–Fields, passed a resolution at its general membership meeting Monday that encourages members to refrain from doing business with Olde Towne Butcher Shop and The Butcher’s Table.

The resolution states, in part, that it “finds the Lawsuit to be ill-conceived, shortsighted and contrary to the legitimate interests of the NAACP and the citizens of the City of Fredericksburg; and, moreover, finds it offensive the Petitioners seek to profit from the vestiges of slavery.”

Keith Lebor, who owns both businesses, was unavailable for comment Thursday.

The two companies’ lawsuit is the second attempt to halt removal of the auction block. The first was a petition filed last month by George Forrest Dickinson Jr., who lives in the Historic Fredericksburg District. Dooley said he voluntarily withdrew it after the judge ruled that Dickinson had no standing in the case.

The weathered stone, colloquially known as the “slave auction block,” has been a source of controversy during its 176-year history. The most recent debate over its fate can be traced to a candlelit prayer vigil in 2017 that started at the auction block and included a prayer by the Rev. Hashmel Turner for God to “heal our land” and to lead city officials to remove the auction block. He called it an “obstacle that brings remembrance of so much heartache, so much suffering and so much pain.”

Soon afterward, there were requests and a petition asking City Council to remove it. Council members then spent 18 months seeking public input before voting 6–1 on June 11 to relocate the auction block to the nearby Fredericksburg Area Museum.

The effort included a public forum, online survey and a yearlong community collaboration project led by the International Coalition of Sites of Conscience. During ICSC sessions, several black residents said they avoid the auction block because slaves had been auctioned at that corner, and wanted the stone removed.

The local companies’ legal petition points out the auction block is listed as a landmark in the Historic Fredericksburg District and is included as a point of interest on the tourist map of the city that’s distributed at the Fredericksburg Visitor Center. The city’s Department of Economic Development and Tourism has no way of tracking the number of people who visit the auction block, but local tour guides will mention it, depending on the type of tour they’re conducting, said tourism sales manager Victoria Matthews.

City Council applied to the ARB on July 31 for a certificate of appropriateness, which City Code requires for the removal of any historic landmark, building or structure in the historic district. The building owners’ petition describes the application as a “belated recognition of the primacy of the ARB” and a “post hoc maneuver” to get the ARB to approve its decision.

The ARB declined to vote on the matter at its Aug. 12 meeting because City Council had already approved the relocation. ARB members later held a work session with the city attorney, but were unable to reach a consensus before the 90-day deadline passed.

According to Dooley, an ARB decision can be appealed to City Council, which council does not grant except on appeal. Drennan said he believes that she’s misinterpreting City Code.

“It’s pretty clear that when it comes to removing an historic structure or landmark, that power vests with the ARB, and no such removal can take place without the ARB’s approval,” he said.

City Manager Tim Baroody said the city has “tapped the brakes” on plans for the stone’s removal. Officials had called for Public Works Department crews to remove the stone under Dovetail Cultural Resources Group’s supervision this month, and then for it to be cleaned and dried so it could be exhibited in the Fredericksburg Area Museum’s River Gallery next year.

The plan also called for interpretation of the block site, to be done in phases. Phase 1 would be for a medallion approximately the same diameter as the block to be placed in the sidewalk, along with a temporary wayside panel. The city would then complete infrastructure improvements, including sidewalk bump-outs at each of the four corners of the intersection.

Those changes would expand the sidewalks and narrow the pedestrian crossings, which would improve the safety of the site and allow more space for Phase 2 interpretation efforts. The Memorials Advisory Commission is heading a process to design permanent interpretive materials for the site, part of the initiative to help the city “tell the whole story” of African American history in Fredericksburg.

“Once those legal issues are behind us,” Baroody said, “we’re full speed ahead.”

To read the petition, visit fredericksburgva.gov/DocumentCenter/View/16440/2019-12-11-Complaint-PDF

To read the Fredericksburg Branch of the NAACP's resolution, visit fredericksburgnaacp.org/slave-block-law-suit-position-state