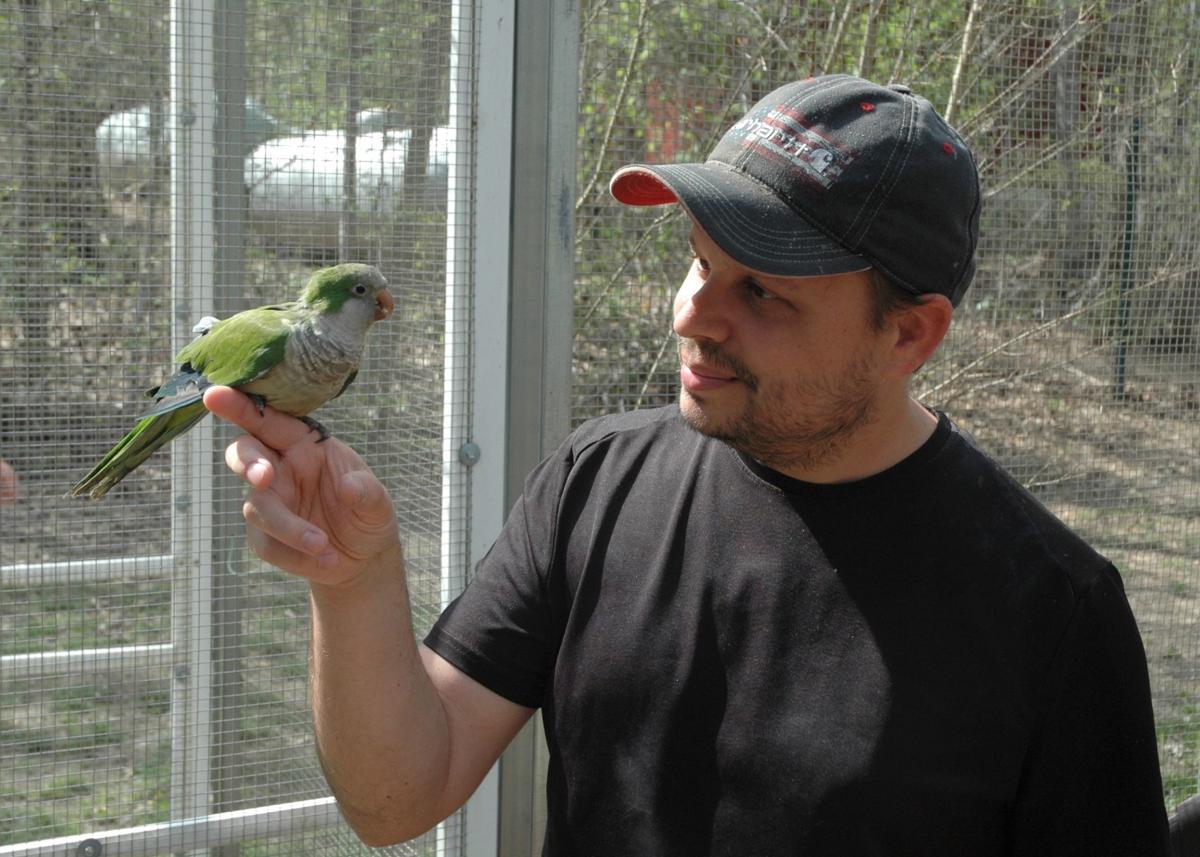 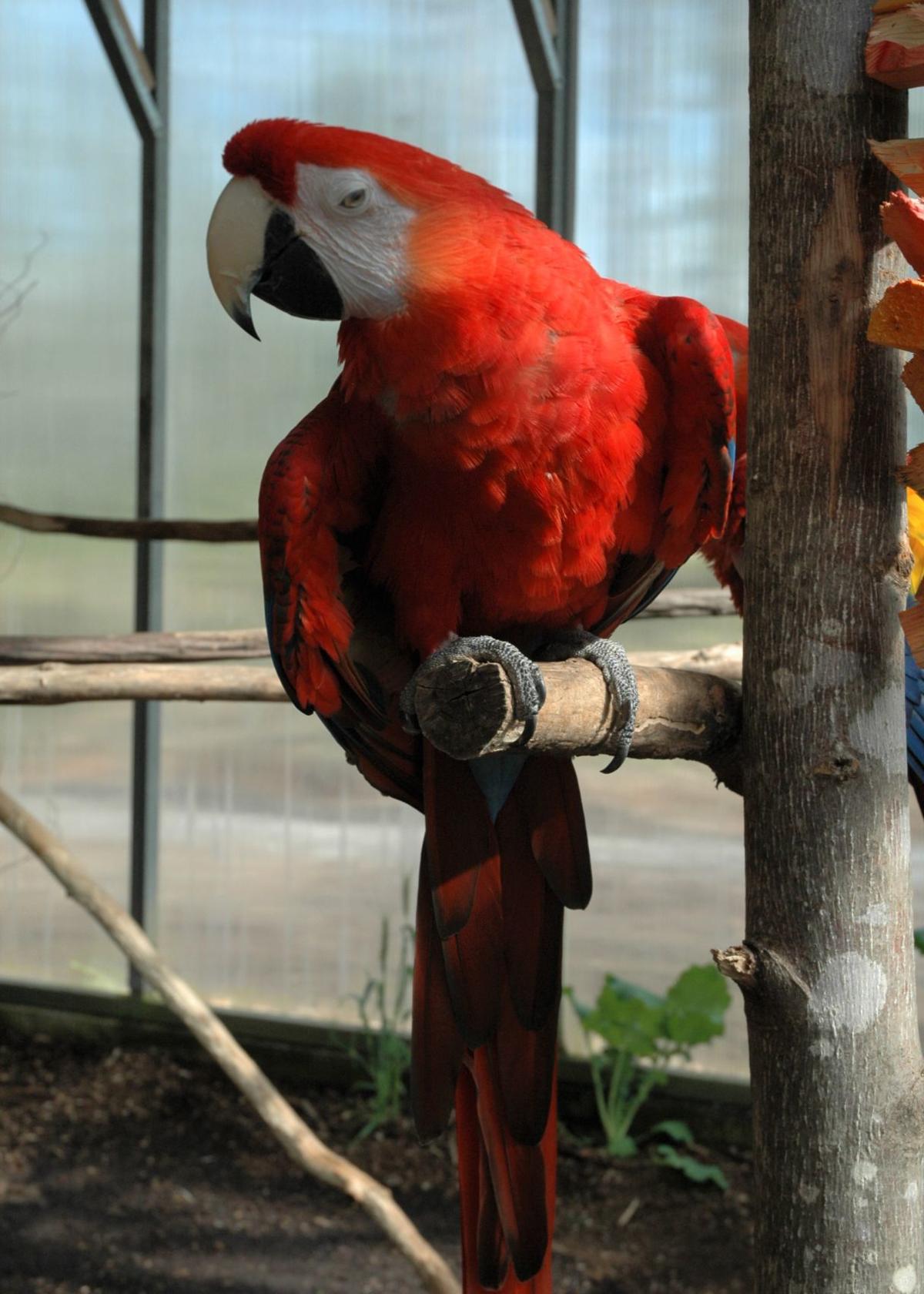 Alex, a Scarlet macaw, is one of the more than 200 avian residents of a bird sanctuary in Louisa County. 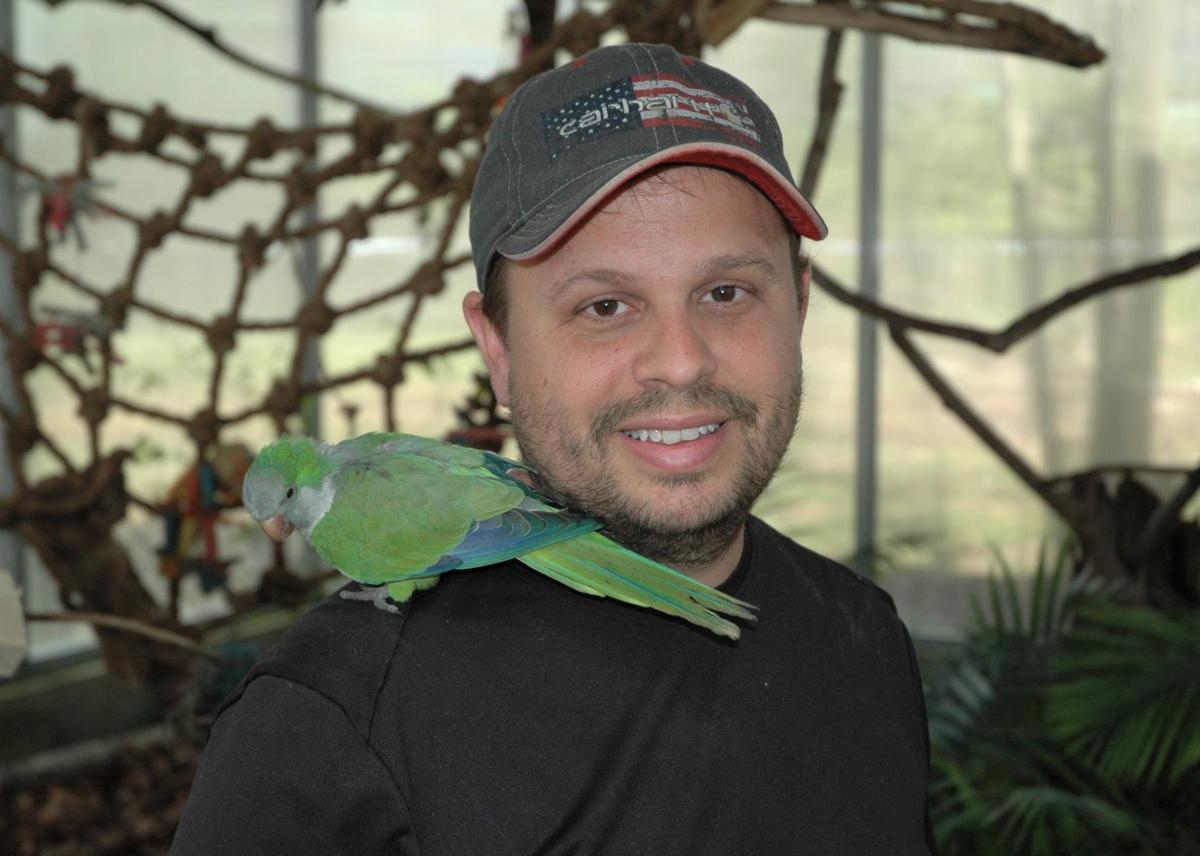 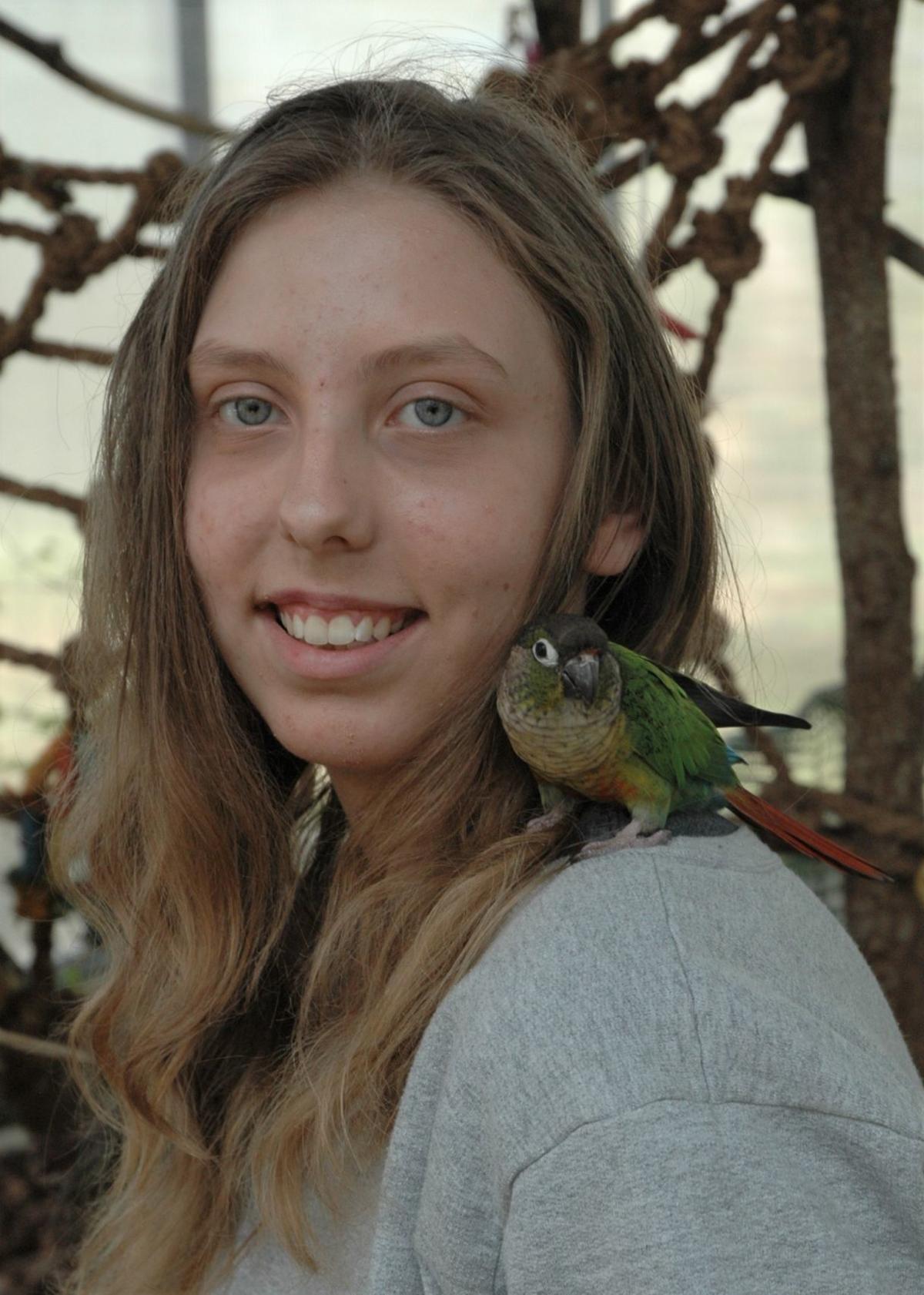 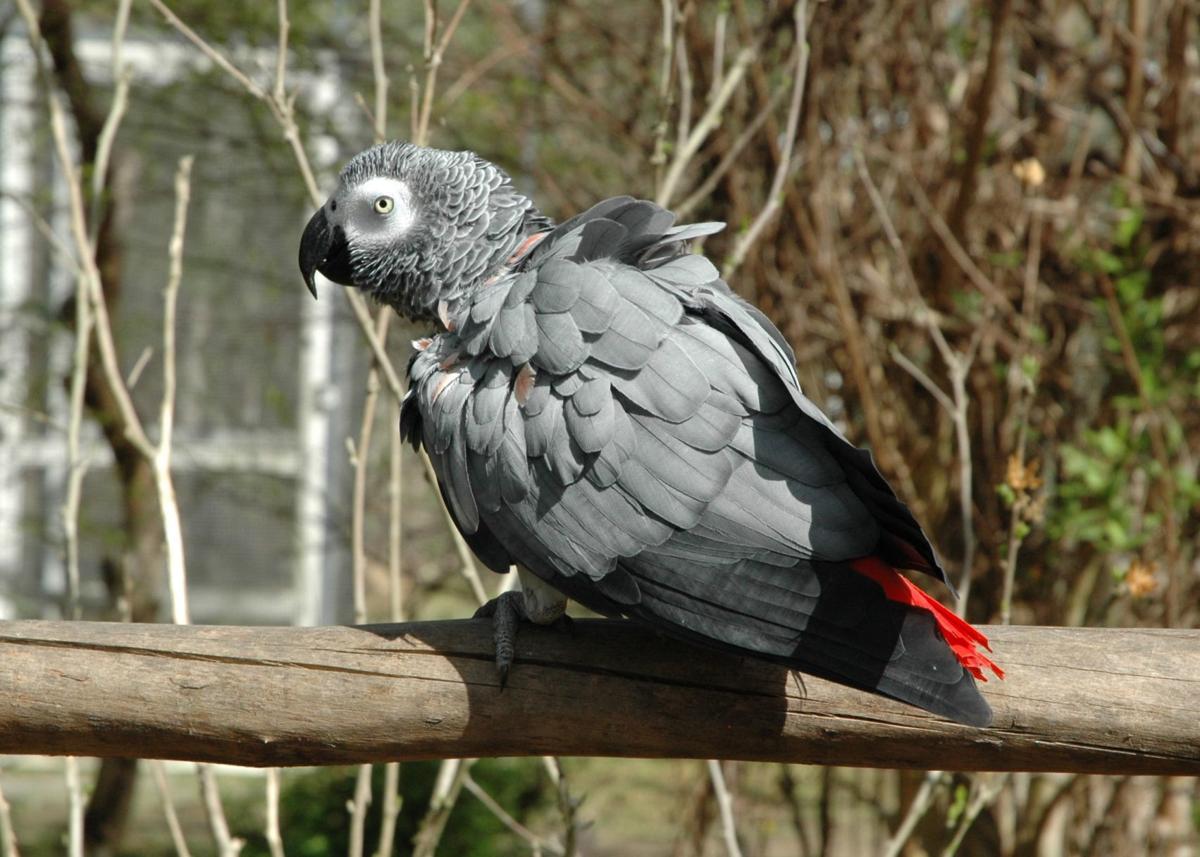 Something has ruffled the feathers of Thumper, a Congo grey parrot at Project Perry. 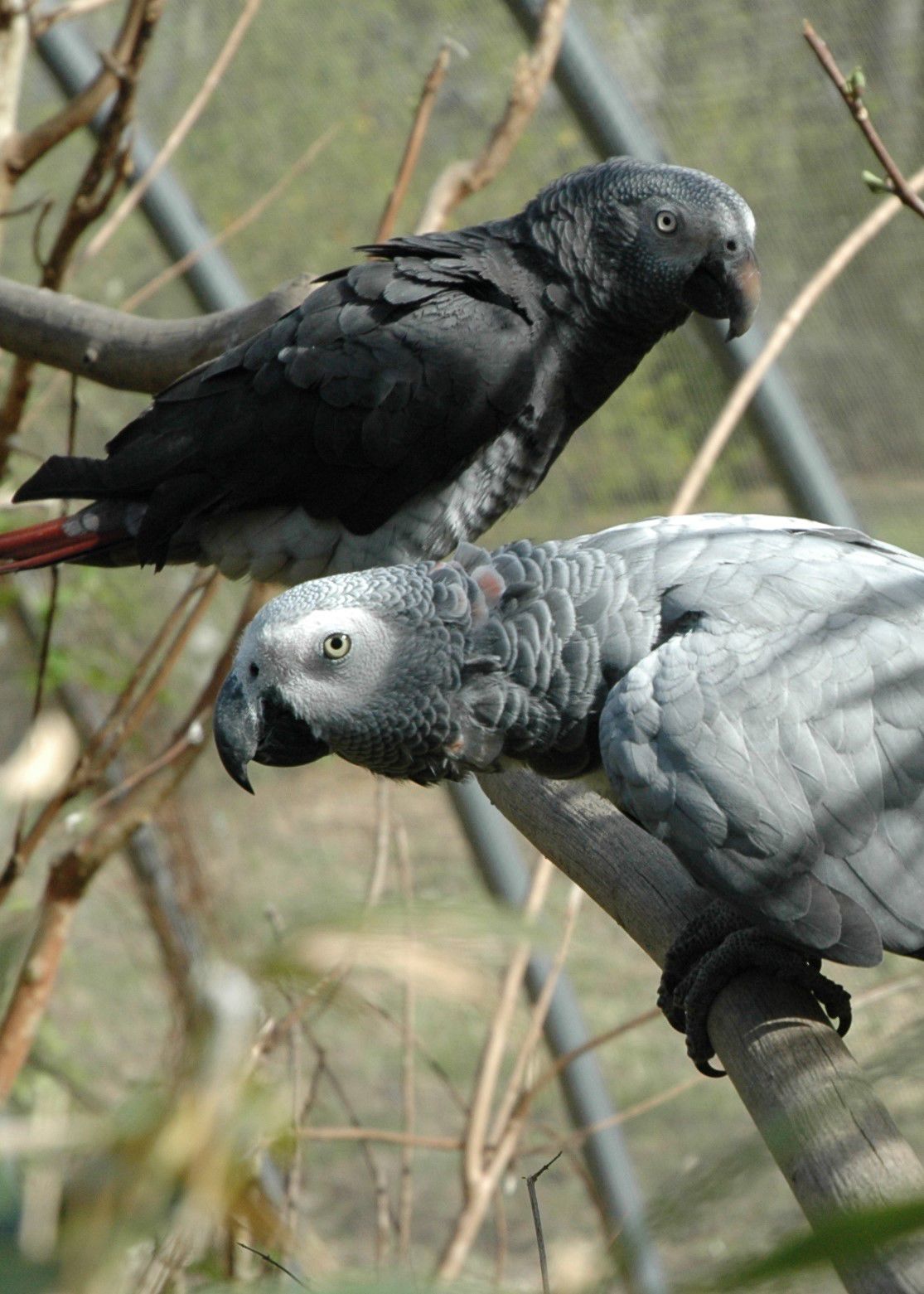 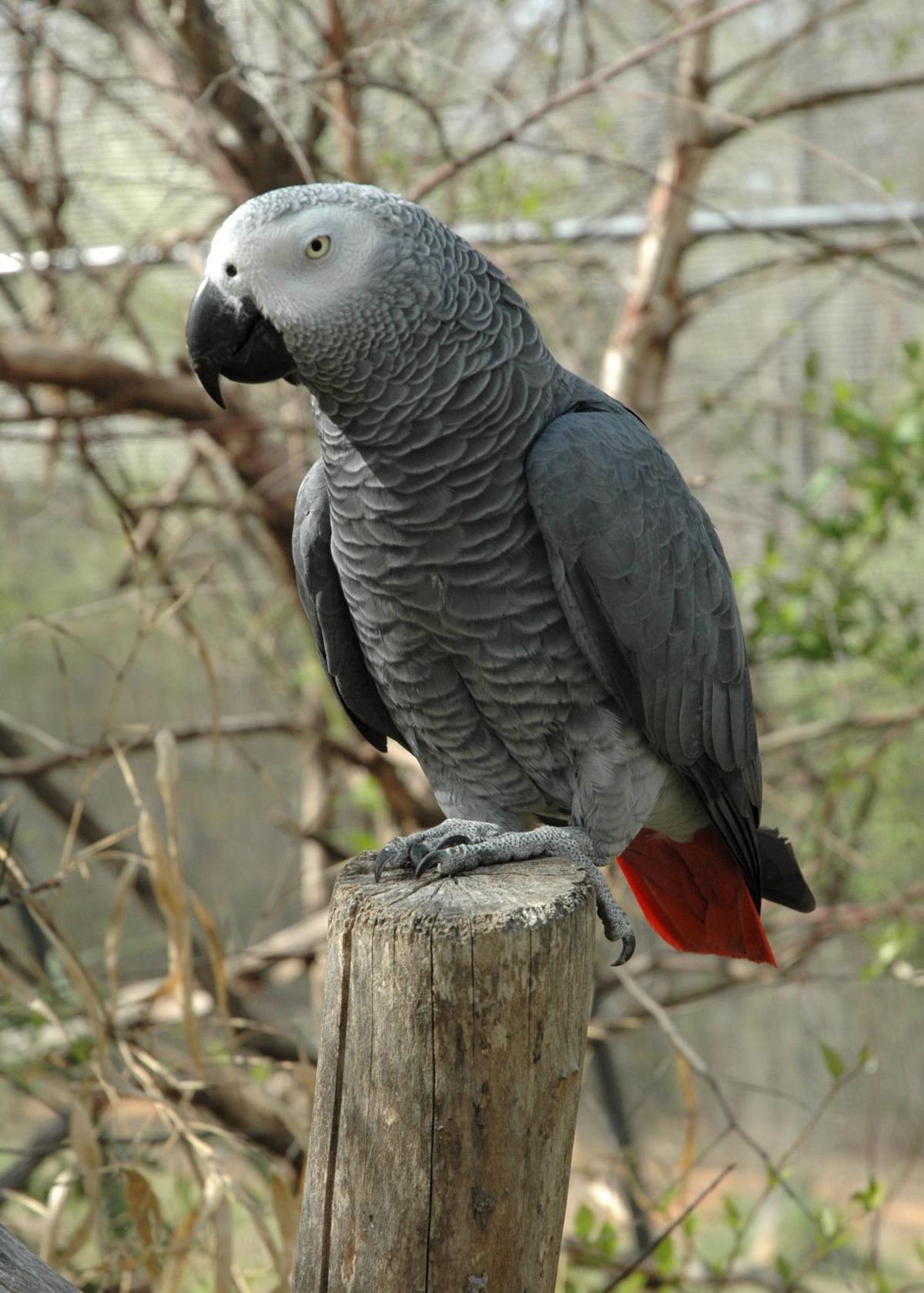 Max, a Congo African grey, keeps watch over goings-on at Project Perry. African greys can have the intelligence equivalent to that of a 3- to 5-year-old human, says Kirah Swanson, the sanctuary's co-director and outreach coordinator.

Alex, a Scarlet macaw, is one of the more than 200 avian residents of a bird sanctuary in Louisa County.

Something has ruffled the feathers of Thumper, a Congo grey parrot at Project Perry.

Max, a Congo African grey, keeps watch over goings-on at Project Perry. African greys can have the intelligence equivalent to that of a 3- to 5-year-old human, says Kirah Swanson, the sanctuary's co-director and outreach coordinator.

You hear them before you see them.

At this Louisa County sanctuary, some 30 miles southwest of Fredericksburg, more than 200 parrots, parakeets and macaws fill the woods with sounds more familiar to African and South American rain forests than to central Virginia.

Known as Project Perry, the sanctuary is the inspiration of 1995 Spotsylvania High School graduate Matt Smith. Here, on 26 wooded acres near the town of Louisa, Smith and three colleagues care for these intelligent, social creatures.

How the sanctuary and its feathered residents got here in the first place is the story of one man’s dream and indomitable will.

“I got into bird rescue [after college],” said Smith, who is Project Perry’s founder and executive director. “I was hooked. This opened a whole new world to me. ... I’m 41 now and I’m so glad I did what I did when I did it.”

Starting in 2005 with only seven parrots, Smith has expanded the sanctuary to six aviaries with another set for completion later this year. Spacious even by human standards, the largest one is nearly 4,000 square feet. This allows for what Smith says are the two most important living conditions for birds—flight and flock—both of which are often denied them as pets.

Many of the birds in Smith’s care are quick to bond with humans, too, both their caretakers and visitors. One African grey parrot landed on this reporter’s shoulder in greeting, bending its head forward to be petted, and remained perched there for the next several minutes.

The birds reveal their personalities in other ways, too. One group of parrots is shy and standoffish—the survivors, Smith calls them—for the cruel treatment they endured in the animal trade. Others begin to gather in ones and twos until visitors find ourselves surrounded by more than a dozen, all wanting to see who has come to visit.

It is a reminder of how social these birds are and why it is so hard for them to be locked in a cage alone all day. The isolation and loneliness cause some to rip out their feathers, according to Kirah Swanson, Project Perry’s co-director and outreach coordinator.

“African greys can have the intelligence of a 3- to 5-year old,” Swanson said, “And you wouldn’t think of putting your children in a playpen with the same toys for 13 hours while you go to work.”

You learn that such treatment is not uncommon. One survivor, an African grey named Stormy, was left in a closet with a towel over his cage while the family took a weeklong vacation. Rescued by animal control, he is alive and well more than a decade later at the sanctuary. He eyes visitors curiously as they pass.

But not every story has a happy ending. Despite its size, Project Perry turns away hundreds of birds each year, Smith said. It just does not have the space.

Why the high demand for parrot rescue?

There are many reasons. Although parrots are the third most popular pet in the U.S. after dogs and cats, they require “intricate care,” as Smith describes it, something that many people are not prepared to offer.

For starters, the birds are long-lived, reaching ages of 60 or older. It is lifelong commitment, Smith said. They can also be loud, screeching at more than 100 decibels, as anyone entering a pen will soon discover. Smith has gotten calls from people who have been threatened with eviction for their apartments if they do not get rid of their parrots.

That many of the parrots at the sanctuary will outlive Smith is not a concern. As a nonprofit with its own board of directors, Project Perry will survive him, he feels confident.

Operating expenses are paid for by private foundations and individual donors from as far away as Europe, Australia and South Africa. Its biggest supporter is Bob Barker, the retired game show host of “The Price Is Right,” Smith said.

Unlike other animal rescue organizations, Project Perry does not reintroduce birds to the wild. To do so would jeopardize the birds’ safety, many of whom are decades removed from their natural habitat if they ever lived in the wild. Also, being comfortable with people, they would be the first birds poached if they were released, Swanson said.

Not to worry, Smith’s dream of caring for birds is very much alive and well. After 15 years of hard charging, he shows no signs of slowing down. Talking to him and Swanson both, it quickly becomes clear that this is not just a job for either of them; this is their passion.

“It’s been more of a commitment—more of a giving of myself, my time and energy—than any career I could have chosen,” Smith said, “But, more of a reward.”

Despite the challenges of caring for 230 birds, Smith is expanding the sanctuary. He is building a new aviary and eventually hopes to add a visitor center for the tours, which attract about 200 people per year. For those who do visit, a unique experience awaits.

Although you will not hear any parrots say, “Polly wants a cracker,” they do mimic other sounds humans make: Laughter, burping, even passing gas. They are pranksters, too, known to re-create ringtones just to watch people answer their cellphones.

“One of my favorite things about the tours,” Swanson said, “you see this look on others’ faces. You see that excitement. You feel it all over again. People don’t want to leave the aviary.”

Named for a pet parrot, Project Perry is open to the public twice a month May through October. Tours last two to three hours and cost $20 a person, with all the money going to the care of the parrots.

Reservations can be made online at projectperry.com, which explains all the details, including what to wear. Waivers are required, because the birds—still being wild at heart—can bite.