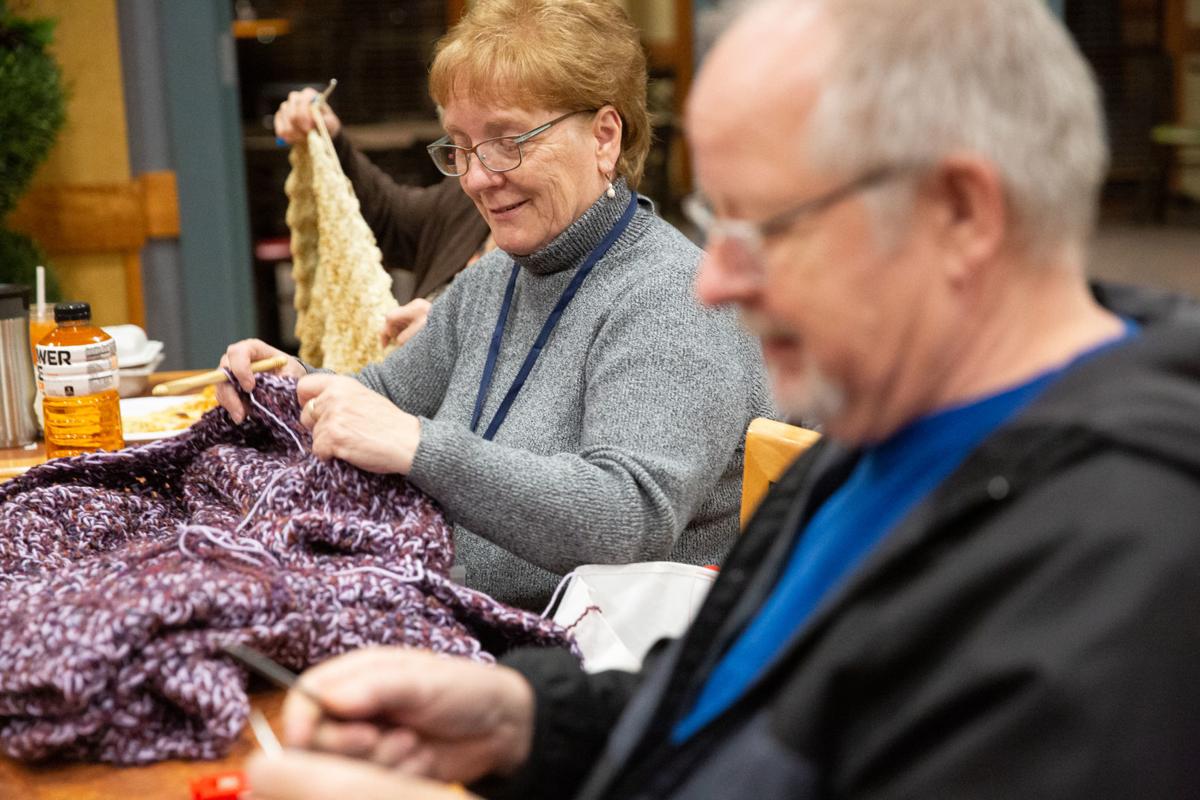 Pam Greswolde, Johnnie Wood and a small group of From the Heart volunteers work on projects at Wegmans in Fredericksburg on Dec. 17. The chapter has donated more than 64,000 handmade items over the past seven years. 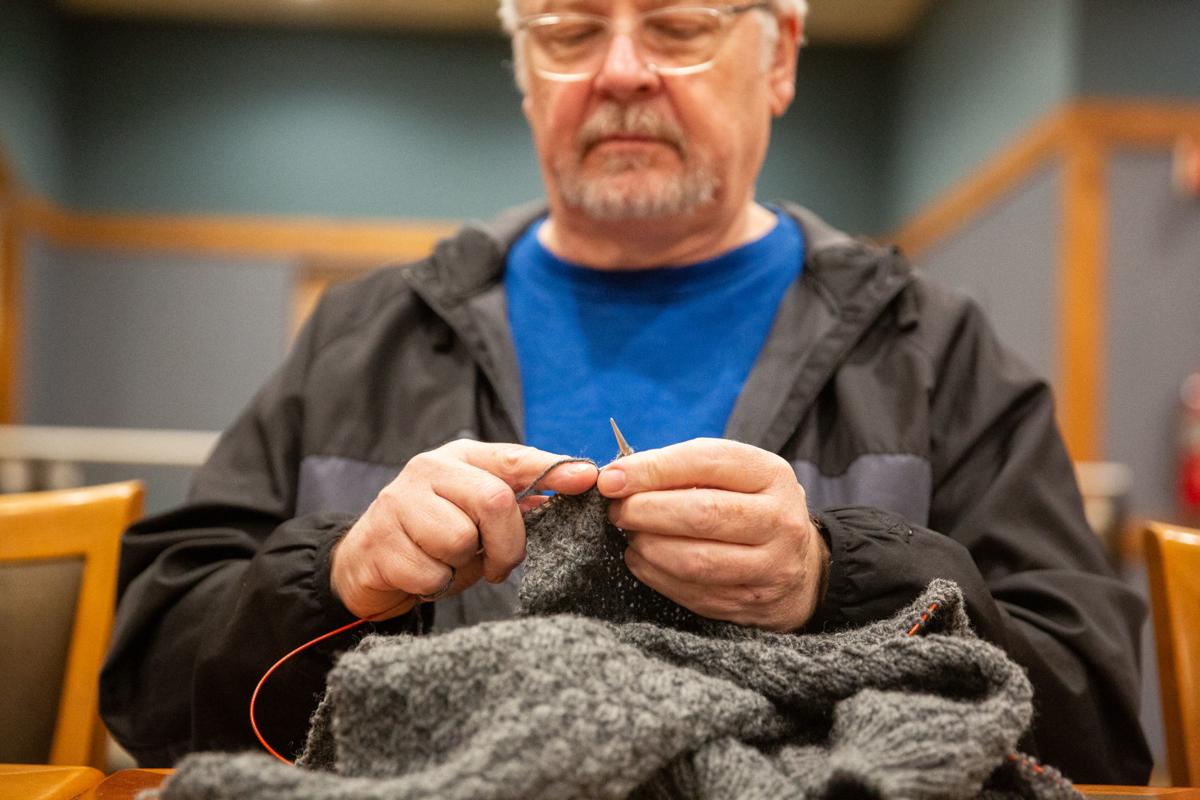 From the Heart volunteer Johnnie Wood works on a project during a recent meeting. 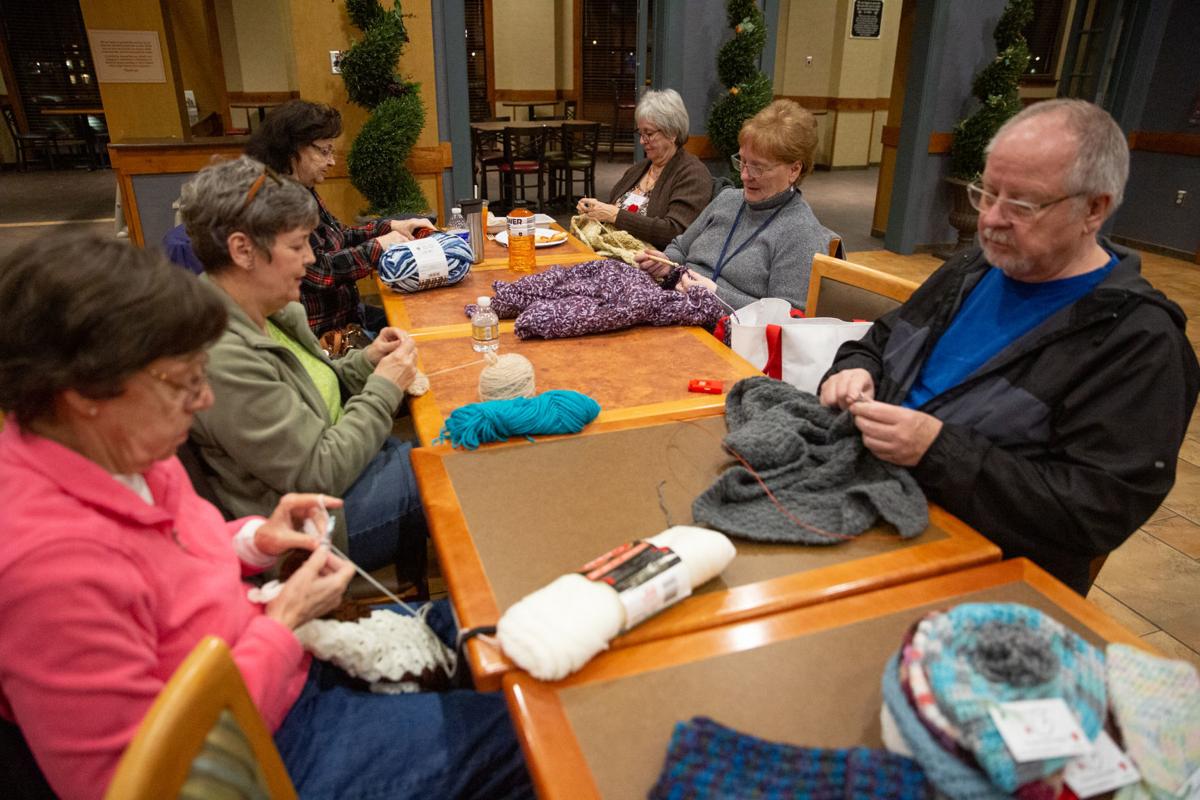 A small group of From the Heart volunteers work on projects at Wegmans in Fredericksburg, Virginia on Dec. 17, 2019. The organization has donated more than 64,000 handmade items over the past seven years. 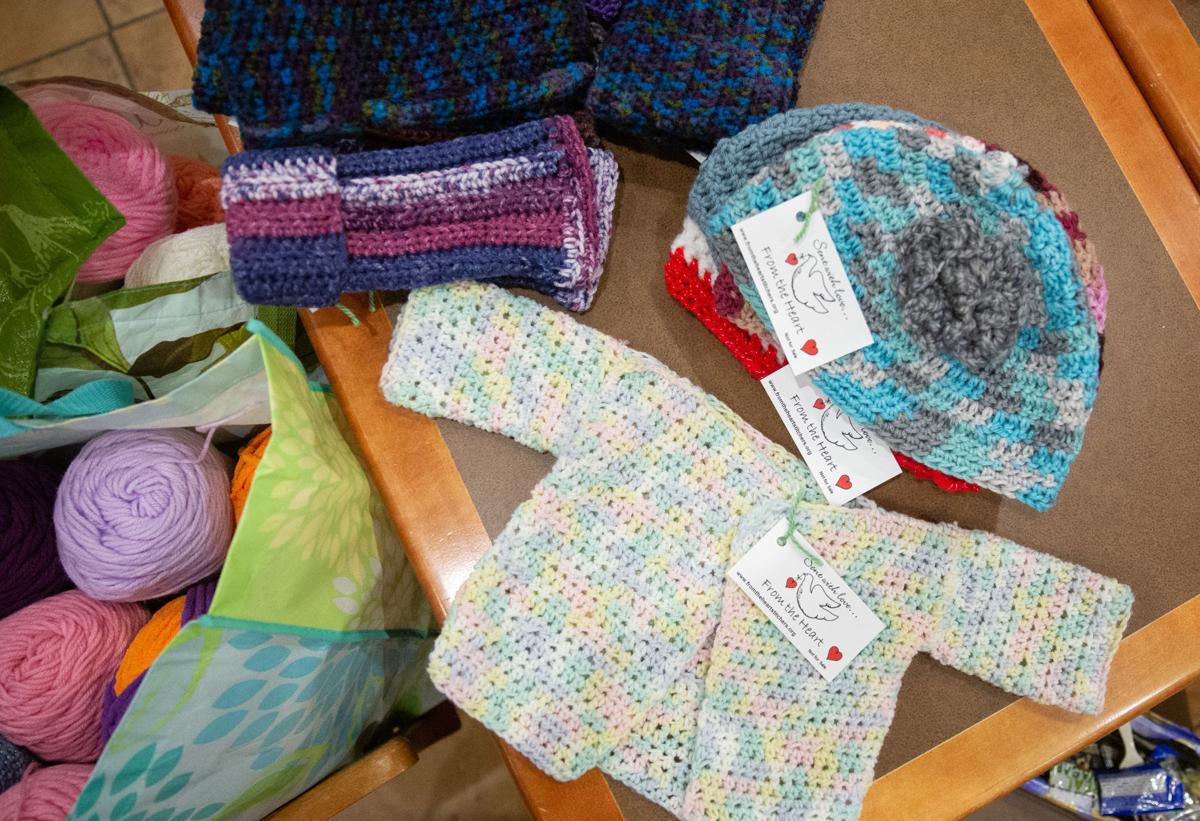 From the Heart volunteers create and donate hats, sweaters, blankets and more. 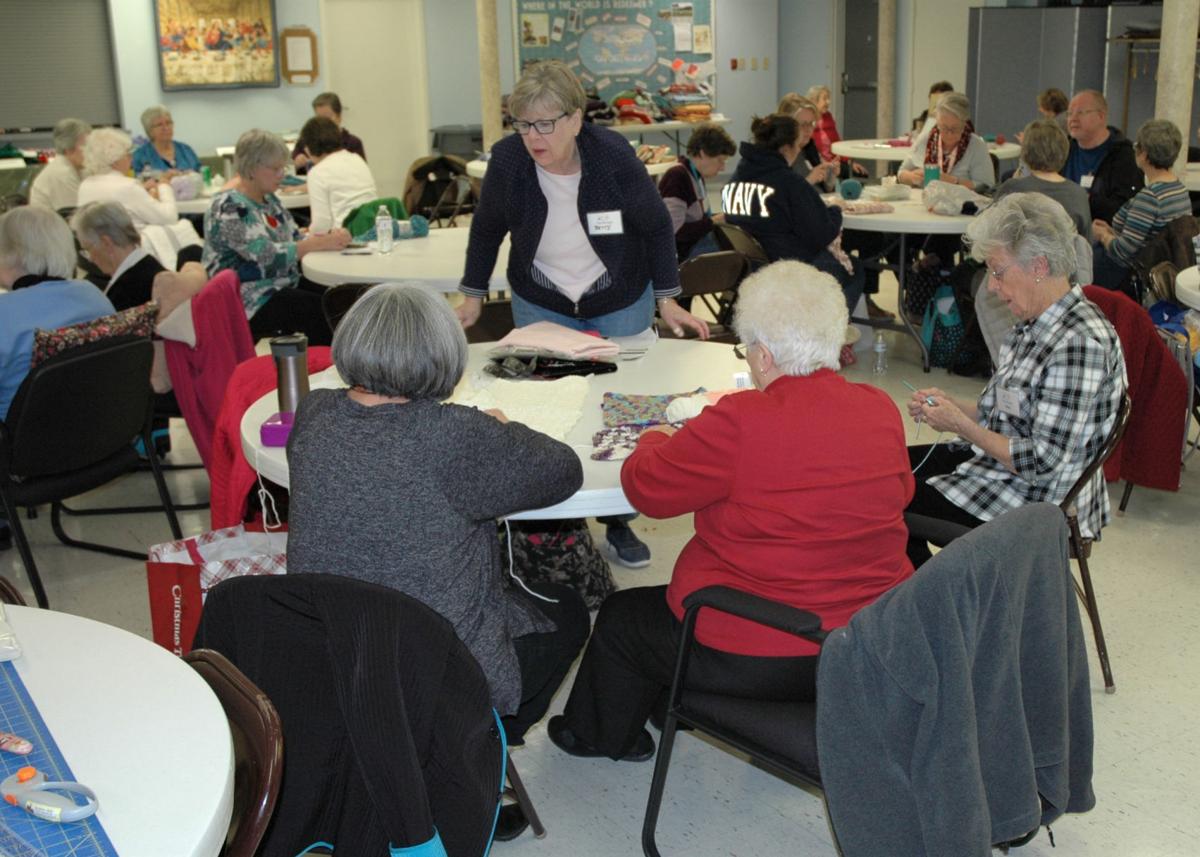 Volunteers knit, stitch and crochet during a recent gathering at Redeemer Lutheran Church. The group meets twice per week.

Pam Greswolde, Johnnie Wood and a small group of From the Heart volunteers work on projects at Wegmans in Fredericksburg on Dec. 17. The chapter has donated more than 64,000 handmade items over the past seven years.

From the Heart volunteer Johnnie Wood works on a project during a recent meeting.

A small group of From the Heart volunteers work on projects at Wegmans in Fredericksburg, Virginia on Dec. 17, 2019. The organization has donated more than 64,000 handmade items over the past seven years.

From the Heart volunteers create and donate hats, sweaters, blankets and more.

Volunteers knit, stitch and crochet during a recent gathering at Redeemer Lutheran Church. The group meets twice per week.

They have been touching lives—more than a quarter of a million and counting—one stitch at a time since 2001.

Children at an area grief camp each get their own monogrammed stuffed animal. An elderly woman with dementia receives a “fiddle blanket” to distract her on car rides and keep her from unbuckling her seat belt. Dogs and cats at local animal shelters are kept warm with pet cozies.

Those are just a few of the stories of From the Heart, a Virginia-based charity whose members are making a difference. The organization does it with fewer than 1,500 members, using needles and thread.

“Members get as much out of this as recipients,” said Pam Greswolde, the coordinator for the Fredericksburg area. “It’s about making someone’s day.”

Someone whose day was made recently is Alicia Willis of Fredericksburg. She received two “puzzle” blankets for her sons, 6 and 11, both of whom have autism. Multicolored puzzle pieces are the symbol of autism, so the blankets are a source of warmth and comfort for Willis’ boys, but one of identity to them as well, Willis said.

“[From the Heart] took time to do that, and times two,” she said. “I’m in awe. I was in tears when they handed them to me. They’re beautiful.”

Willis said her older son takes his blanket with him wherever he goes, even to school.

Willis’ experience is hardly unique. In fact, it is key to From the Heart’s impact and success. It is not just the recipients who benefit from their work. Many lives are affected, according to Greswolde.

There is the person who makes the item, the person who delivers it, the caregiver who presents it, and the family members who see the transformation that can occur with their loved ones.

Since From the Heart began in 2001, it has created and delivered nearly 350,000 individual, handmade items, everything from commonly used hats and scarves to the unusual, such as port pillows that can be fastened to seat belts using Velcro to relieve pressure on sore surgical wounds.

With its 145 members, the Fredericksburg chapter—which includes the counties of King George, Spotsylvania and Stafford—is the largest in the state. In just the first half of November alone, members made and delivered 800 items—all free, Greswolde said.

Their work supports more than 40 organizations from Culpeper to Caroline County and beyond, some as large and well-known as Mary Washington Hospital and others smaller, but no less important, such as homeless shelters, nursing homes and schools.

One such organization is the Falls Church-based Capital Caring Health, a hospice company with more than a dozen locations around the region, including two in Fredericksburg. Its director of children’s programs, Tara Hoit, met Greswolde in 2015 and called From the Heart’s work phenomenal.

“I was so struck by her and the volunteers and their compassion,” Hoit said. “They provide that support by lovingly creating beautiful, intricate art pieces.”

In the Fredericksburg area, Capital Caring Health runs a grief camp at Glasgow Farm in Stafford County for children who have lost a parent or sibling. Hoit described From the Heart’s output as prolific, saying they once made a turtle with the initials of each one of the more than 60 children at the camp.

“The ladies and men, they really stitch themselves into these pieces,” Hoit said. “The articles are supernaturally capable of giving love. Our families and children are so grateful that someone who’s never met them is able to create something so intricate and personal.”

As From the Heart nears the end of its second decade, it is always welcoming new members. Although most of those who join are retirees and women, no one—not people from out of state nor those who cannot stitch—is turned away.

“The connection is the need to create and to have camaraderie,” said Peggy Lunardini of Fredericksburg, who has been a member for six years. “We are there to have fellowship and to do good things.”

People who did not know how to stitch have attended meetings for the first time and made something before they left, Greswolde said, explaining that knitting is easier than learning to ride a bike.

“I have never found a group so welcoming,” Greswolde said. “Come, and we’ll teach you.”

From the Heart meets the second and fourth Tuesday of each month from 10 a.m. to 12:30 p.m. at Redeemer Lutheran Church on Harrison Road in Spotsylvania, as well as every third Tuesday from 5:30–7:30 p.m. at Wegmans on Carl D. Silver Parkway.

“I get to do something I love doing,” Greswolde said. “Knowing that when I’m finished, you get to brighten someone’s day. You touch so many lives with that one donation.”

J. Steven Moore is a freelance writer in Caroline County.