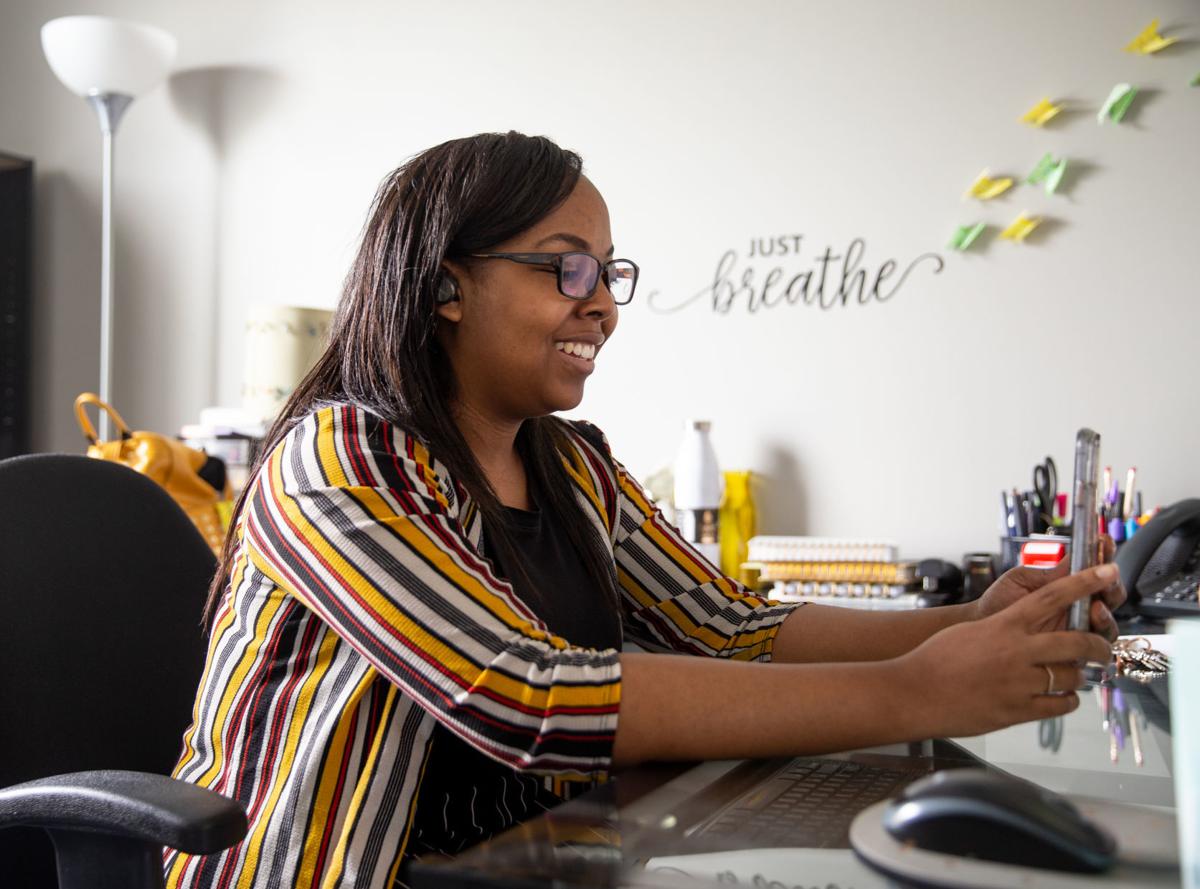 Kali Julienne, a social worker for Embrace Treatment Foster Care, speaks with a foster parent via video chat from her office. 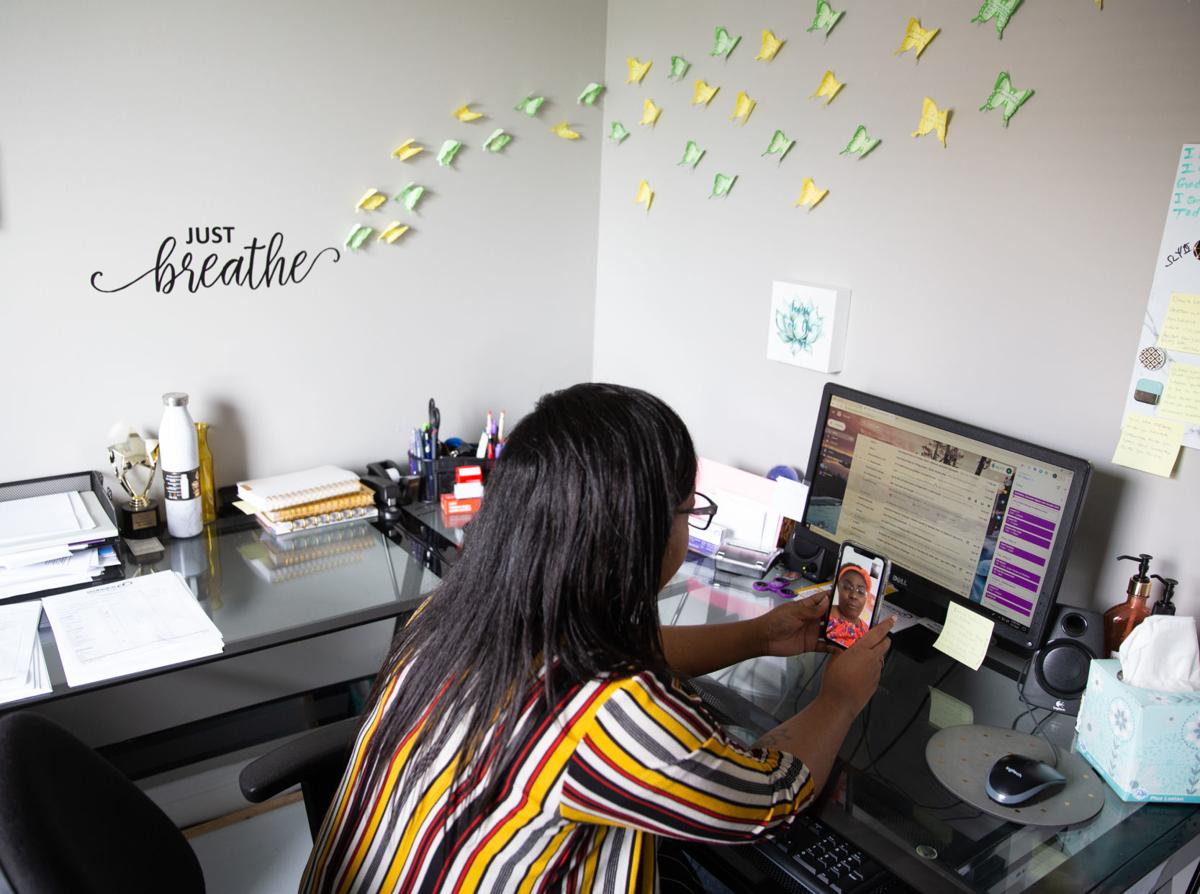 Kali Julienne speaks with a foster parent from her office. Embrace Treatment Foster Care has been meeting with their families virtually twice a week.

Kali Julienne, a social worker for Embrace Treatment Foster Care, speaks with a foster parent via video chat from her office.

Kali Julienne speaks with a foster parent from her office. Embrace Treatment Foster Care has been meeting with their families virtually twice a week.

The flyers, in both English and Spanish, are titled “Kids Need Essential Workers To Report Abuse During the COVID-19 Crisis,” and they list signs of physical, sexual and emotional abuse that an employee might notice in children they encounter at work.

“We’re trying to think of places where people are still seeing our children,” said Christen Gallik, director of the Department of Social Services. “So fast-food restaurants, pizza delivery people—anybody who is working now.”

At the local, state and national levels, social workers are concerned about a decrease in the number of child abuse reports since the coronavirus outbreak caused schools to close.

“Teachers report the majority of abuse and neglect, and now we’re looking at our kids being out of school from mid-March until we go back in the fall,” said Gretchen Rusden, recruitment coordinator for Embrace Treatment Foster Care, which has a local office.

Since Gov. Ralph Northam declared a state of emergency in Virginia on March 12, the Virginia Department of Social Services has seen a 50 percent decrease in the number of child abuse and neglect hotline referrals and a 90 percent drop in referrals from school staff.

“While we are still receiving calls, our data reflects numbers more similar to summer months—a typical June or July volume,” said Cletisha Lovelace, associate director of public affairs for Virginia DSS, adding that the department is concerned about “the potential for an increase in domestic violence and child abuse and neglect” during the social isolation imposed by the COVID-19 crisis.

That’s why Fredericksburg’s Department of Social Services prepared the flyers to remind other essential workers—medical personnel, police and first responders as well as grocery store clerks, food delivery drivers and others—who might not be used to reporting child abuse of the role they can play in preventing it.

“Because our traditional mandated reporters are not seeing our children, we really are relying on our essential workers to let us know if they see anything concerning,” Gallik said. “That’s what the flyers really get to. Our ability to get this information out widely to various groups of people is recently going to be instrumental in keeping our kids safe.”

Allie Williams of Stafford County grew up in the foster care system in Colorado and has been a foster parent in Virginia for eight years. She adopted three children from foster care and is now fostering a 13-year-old girl who came to her in the beginning of March.

Williams said her experience causes her to worry about children’s safety the longer schools remain closed.

“For a lot of kids, school was their safe place,” she said.

Rusden said the “inordinate” amount of family time caused by the pandemic-related shutdowns can be hard, even on those with coping skills.

“It’s still hard with us to be at close quarters, trying to work, trying to homeschool and make sure everyone is taken care of,” she said. “If you don’t have coping skills, or appropriate coping skills, this is where we find abuse and neglect come into play.”

“There are a lot of things people are dealing with that, unfortunately, they may be taking out on their kids,” she continued.

Local social service departments said they are getting fewer referrals to child protective services since the outbreak began.

In normal times, the Fredericksburg DSS receives an average of three reports of child abuse or neglect per week that are investigated and found to be merited, Newton said. Since the outbreak, that number has dropped to one or two calls per week.

In addition to creating the flyer for essential workers, Fredericksburg DSS prepared a flyer about Child Abuse Prevention Month, which was observed nationally during April and which the department is extending locally through the end of Northam’s “shelter at home” order, set to expire June 10.

The flyers give tips on coping skills, such as sharing feelings with family members and other trusted friends, dialing 211 to find out about local organizations that support families, playing games and doing craft projects together as a family and giving children space to share strong feelings without overreacting.

Calls to Spotsylvania’s DSS dropped 35 percent in April compared with the same month in 2019, the department said. Of those calls, the number of serious allegations requiring investigation are down “drastically” by about 73 percent as compared with April 2019, Spotsylvania DSS Director Amy Swift said.

“This is why we are asking that the community check in on their family, friends and neighbors,” she said.

Swift said child abuse and neglect reports always drop whenever schools are out, but the current pandemic adds another level of concern.

“The increased ‘worry’ this pandemic breeds is that children are not only out of sight and sound from potential community supports, but they are also now uniquely isolated at home during an extremely stressful time for them and their parents,” she wrote in an email. “Households across our community, on a good day, deal with challenges such as mental health, substance abuse, behavioral issues and financial stressors. When you add a pandemic on top of that, combined with complete isolation—yes, we are concerned.”

Stafford DSS Director Michael Muse said referrals to child protective services are down by more than half.

“The school system is our largest referral source and the fact schools are closed has led to fewer reports,” Muse said. “In April 2020, we received 26 new referrals. The number of new referrals for a typical April is 55–60.”

Parenting can be hard under the best of circumstances, and can be even more difficult for foster parents, who are caring for kids who have undergone the trauma of being separated from their birth families. The COVID-19 outbreak only makes things more complicated.

Felicia Cook, resource parent trainer for UMFS, said the organization’s foster parents “go above and beyond” caring for children under the new challenges presented by the outbreak.

“Even in the midst of this, people don’t see it, but they’re still doing such a great job,” Cook said.

In order to support foster parents and check on the children in care, Embrace Treatment Foster Care’s social workers have visited with their 15 families virtually twice a week since the outbreak began.

“We may only have seen some of them once a month before, but now we are seeing everyone—family and kids in front of the computer, eyes on everybody—twice a week,” Rusden said.

In addition to providing support through these virtual meetings, Embrace TFC has put together activity kits for children in care and weekly meals for families.

“Our foster families get stipends, but now the kids are out of school and they’re spending more on groceries, so it’s impacting them financially,” Rusden said. “So donations of gift cards for grocery stores or restaurants are great right now.”

Swift said the Virginia DSS is evaluating the need for an increase in the stipends given to foster families during the COVID-19 crisis.

The department did approve on April 30 an additional $2,000 one-month payment for foster parents caring for children at high risk for developing COVID-19 or with a confirmed diagnosis of the disease.

Newton said Fredericksburg DSS is reaching out to foster families more often via phone and continuing to make visits virtually.

“We’re still laying eyes on them as we were before, just through a different means,” she said.

The department is also hosting more training for its foster parents than it did before the outbreak.

“Normally, we would offer one [training] a month and now we’re doing them every other week or so,” Newton said. “We just did one on cybersecurity, because now kids are spending more time on computers, gaming systems and phones. And we’re planning another one about how [COVID-19] may impact trauma or compound trauma.”

“It is also important for foster families to be kind to and forgiving of themselves during this difficult time,” she wrote in an email. “Identify independent supports to assist you and always reach out to us to brainstorm ideas and solutions.”

Swift said this advice pertains to all families.

“People need to know they are not alone, it is OK to not be ‘OK,’ and to reach out for help before things spiral out of control,” she said.

Swift said parents shouldn’t worry that reaching out to social services will lead to the removal of their children.

“We have an entire prevention team that is specifically trained to surround families in our community with every possible resource available to avoid that from happening,” she said. “We know things are crazy right now and we are here, ready to help you and your family, along with many other community partners.”