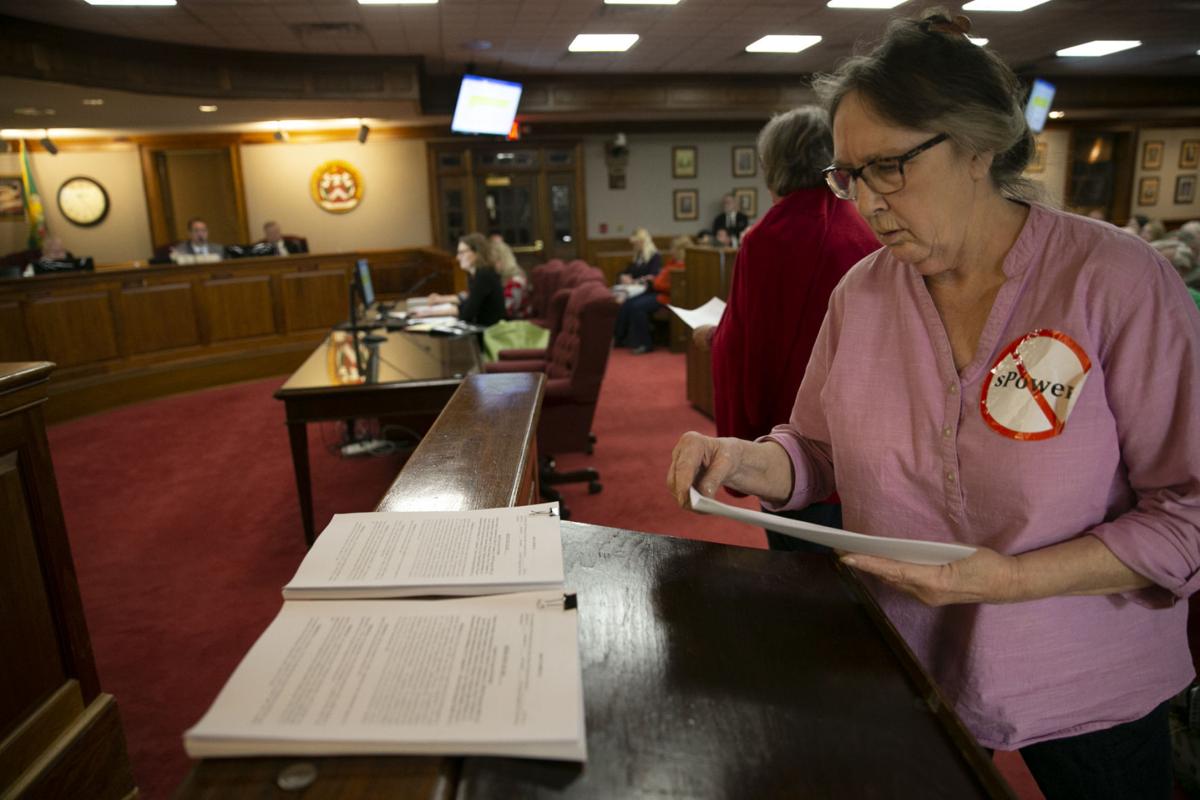 Solar farm supporters (left) leave the board chambers after Spotsylvania supervisors approved the largest of the site’s three tracts. At right, opponent Valerie Ackerman reviews special-use permits for the project. 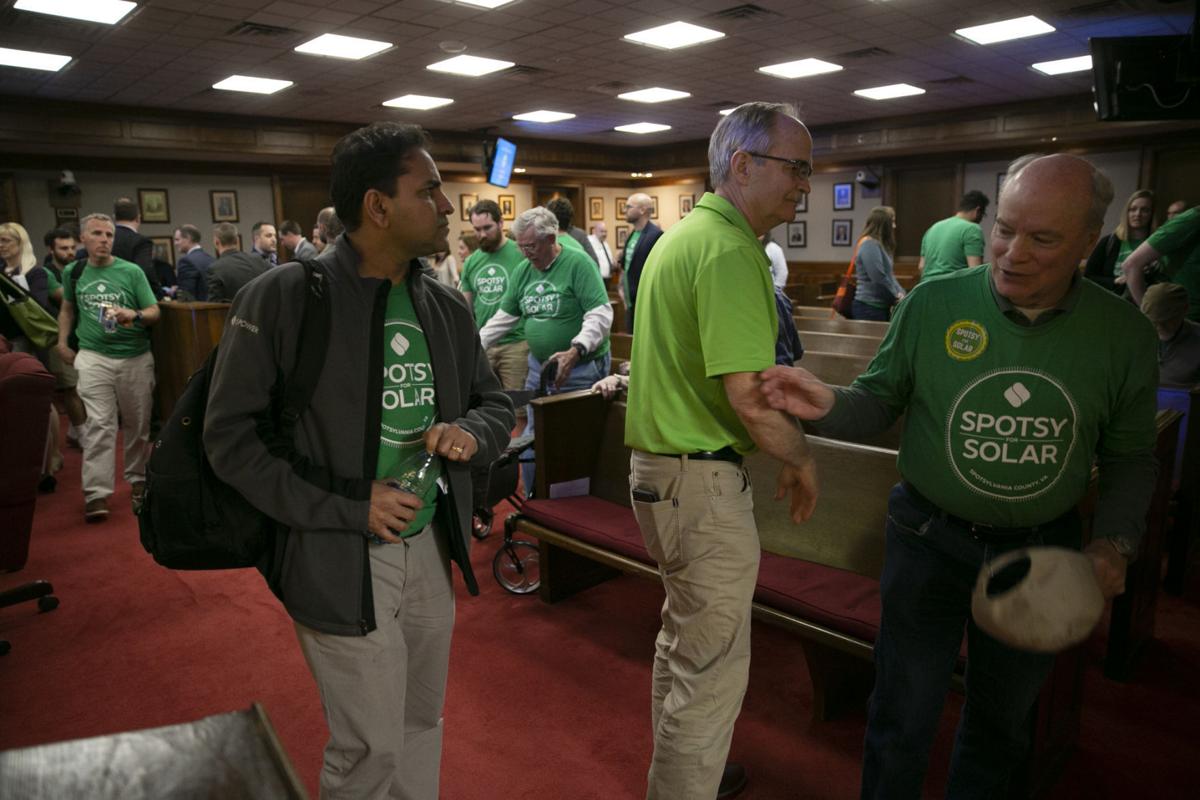 Supporters of Sustainable Power Group’s proposed solar power facility leave the Board of Supervisors’ chambers after a vote on the first of three special-use permits for the project Tuesday night.

Solar farm supporters (left) leave the board chambers after Spotsylvania supervisors approved the largest of the site’s three tracts. At right, opponent Valerie Ackerman reviews special-use permits for the project.

Supporters of Sustainable Power Group’s proposed solar power facility leave the Board of Supervisors’ chambers after a vote on the first of three special-use permits for the project Tuesday night.

Opponents of a massive solar facility planned in western Spotsylvania County believe supervisors who approved the biggest section of the project this week turned their backs on constituents.

“It’s kind of a betrayal by the supervisors,” said Sean Fogarty, one of the leaders of the Concerned Citizens of Spotsylvania County group that strongly opposed the solar farm.

Like many other opponents, he lives in the Fawn Lake neighborhood near the site where Sustainable Power Group plans to build a $615 million solar facility that will be one of the largest in the nation. The Utah-based company’s plans call for installing about 1.8 million solar panels on three sections of a 6,300-acre site to produce 500 megawatts of electricity a year.

Supervisors voted 5-2 late Tuesday night to approve a special-use permit for the largest of three tracts. The supervisors are expected to vote on the other two tracts Thursday, bringing an end to an approval process that has been going on for more than a year.

As they have at other meetings over the proposal, opponents and supporters alike packed the meeting room Tuesday. Fogarty was among those who left the meeting before the vote, taken at about 11:30 p.m. But he watched it at home on television.

He suspects back-room agreements played a role in the approval.

“The lack of transparency in the approval of the largest zoning action in the county is what is shocking,” he said, noting that none of the supervisors “owned up” to several changes to special-use conditions they approved Tuesday.

Fogarty said it seemed like the supervisors had already determined what changes to make, but none of them said why during the meeting.

“They were cowards about it,” he said.

Supervisor Greg Benton, who represents the district where the facility will be built, denied Fogarty’s assertion, saying the supervisors’ goal is to do what is good for the county. Benton added that he and fellow supervisors asked plenty of questions throughout the process, along with poring over mounds of information and taking trips to other solar facilities.

“It wasn’t just one factor that turned me towards supporting this project; it was numerous,” he said.

Benton initially supported the project. But after opponents came out in force against the proposal, he said he wouldn’t support it. He said he regrets taking positions early in the process.

Eventually, he said, he found local support and opposition to be evenly split. Benton praised the efforts by residents, but added that some also made the process more difficult by overloading staff with information and by bullying supporters.

In the end, he said he believed opponents’ concerns over the solar facility were answered. In explaining his support for the project, Benton cited economic benefits for the county that include increased tax revenue and jobs, along with the possibility that other businesses will be attracted to Spotsylvania because of the solar facility.

He also said property rights helped sway him to approve the permit.

The process has taken a toll on the supervisor, who said it is a reason he has decided not to run for re-election this fall.

Supervisor David Ross, who joined board Chairman Paul Trampe in voting against the permit, said the project “is just way too big for a first time.”

“I think we’re setting ourselves up to be a guinea pig,” he said. “I would have rather started smaller.”

SPower, a major player in the alternative energy industry with more than 150 wind and solar projects under its belt nationwide, applied for the special-use permits in late 2017 to build the solar facility on tracts that have been used for growing timber.

Soon after that, residents who live near the site started questioning the project. They said it is too big to be near homes and presented too many risks without clear benefits for the county.

County staff and supervisors were inundated with mountains of information from both sides about the project and solar facilities in general.

The county Planning Commission dealt with the project first, recommending approval of the smallest tract, but denial of the two bigger ones. County staff recommended approval of all three sections, with strict conditions.

The supervisors set the Planning Commission’s conditions as a benchmark. The commission’s recommendations cover such things as building buffers between the homes and solar farm, banning the use of panels containing cadmium telluride, and requiring a bond to cover the cost of cleaning up the site at the end of the solar farm’s lifespan.

On Tuesday, supervisors adjusted some of the conditions.

One change restricts the project to a maximum of 500 megawatts, addressing a concern by opponents that sPower wants to eventually expand the site.

The board also agreed to allow 30 percent of the solar panels sPower installs to contain cadmium telluride, a toxic substance that opponents said could create a health hazard.

Benton noted during the meeting that a county consultant and experts hired by sPower deemed the panels safe. Ross said he still has concerns about the panels’ safety.

Two other condition changes involved setbacks from residences and the decommissioning bond.

The supervisors voted to adjust the setback required between solar panels and neighboring property to 450 feet from homes or the centers of undeveloped lots. The company said the Planning Commission’s recommendation of 350-foot setbacks from property lines would have adversely altered the site design.

The decommissioning bond covers the cost to clear the site—projected to be in operation at least 35 to 40 years—whenever it shuts down.

The Planning Commission called for a bond of approximately $36 million, based on each disturbed acre, without allowing sPower to lower the total based on recycling the equipment. Company representatives have said the bond figure was too high and unfair.

The board voted to count the recycling credit, along with allowing sPower to gradually make escalating bond payments, including a grace period of five years with no payments. The conditions call for the decommissioning estimate to be addressed every 30 months during the life of the project.

The company expects to have the facility operating within two years.

SPower already has agreements to sell the electricity it produces to Apple and Microsoft facilties outside Spotsylvania, along with the University of Richmond. Scott Shenk: 540/374-5436 sshenk@freelancestar.com