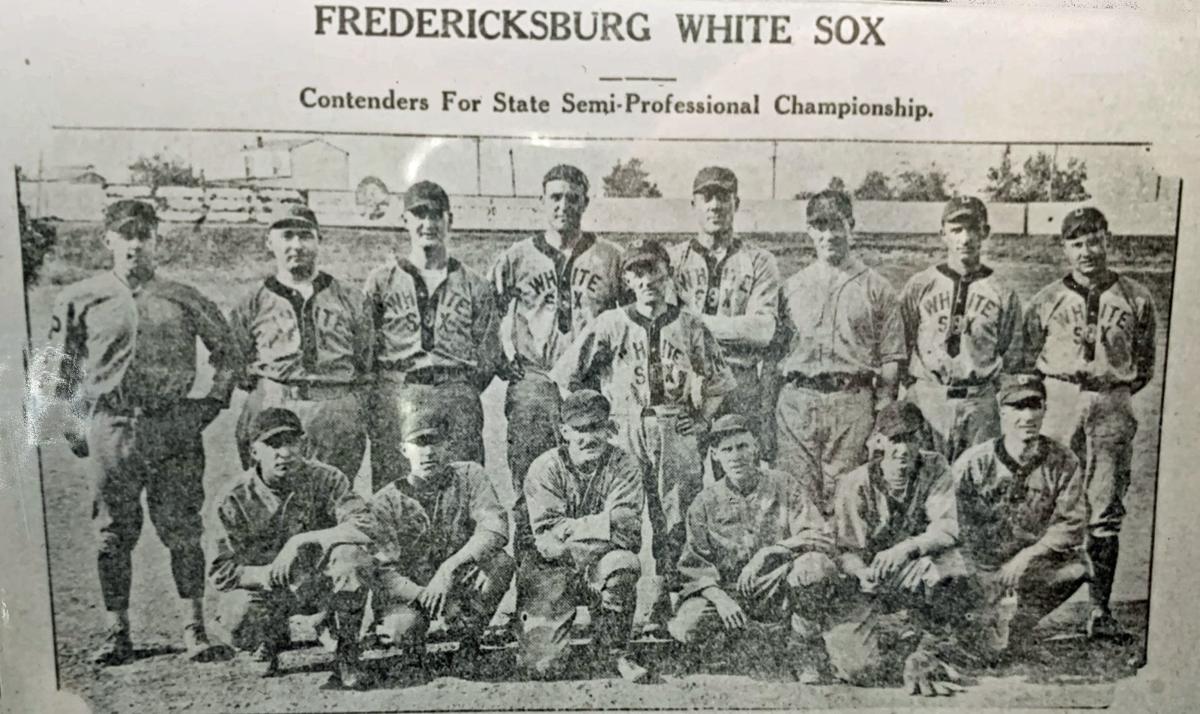 The Fredericksburg White Sox, a semi-professional ball club, is pictured in 1924. 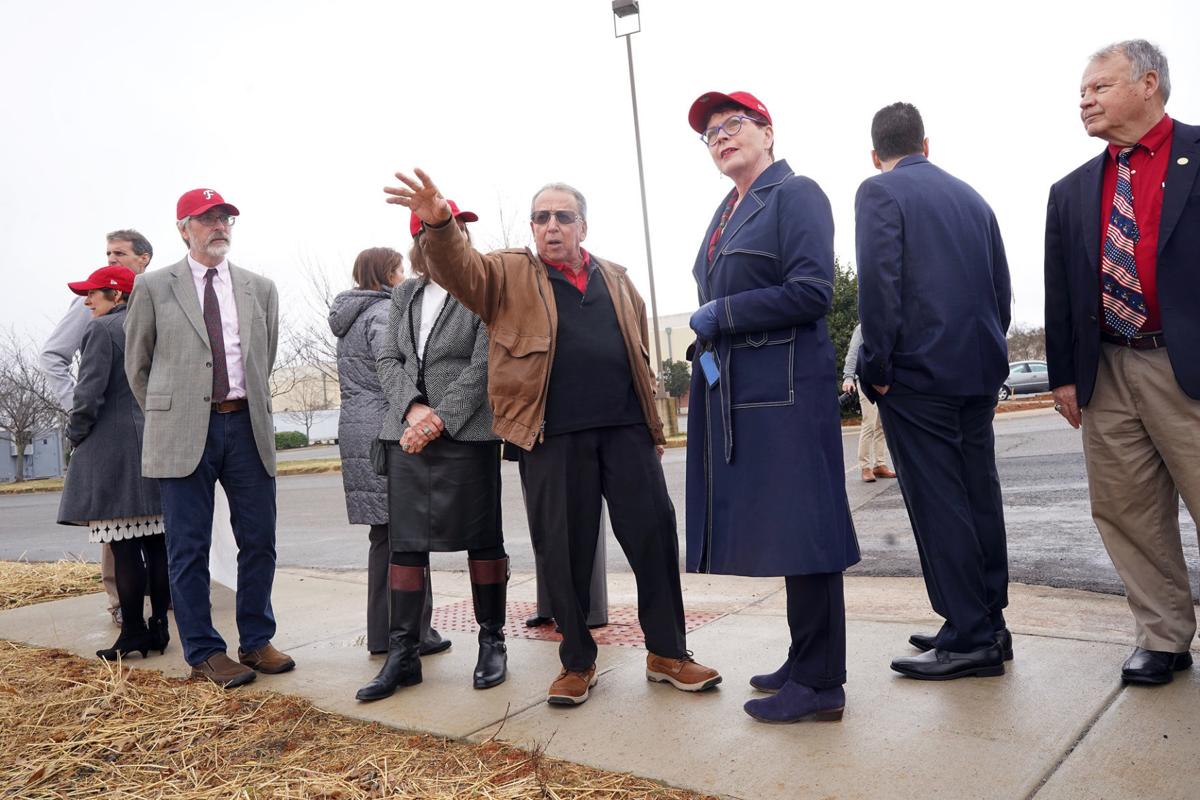 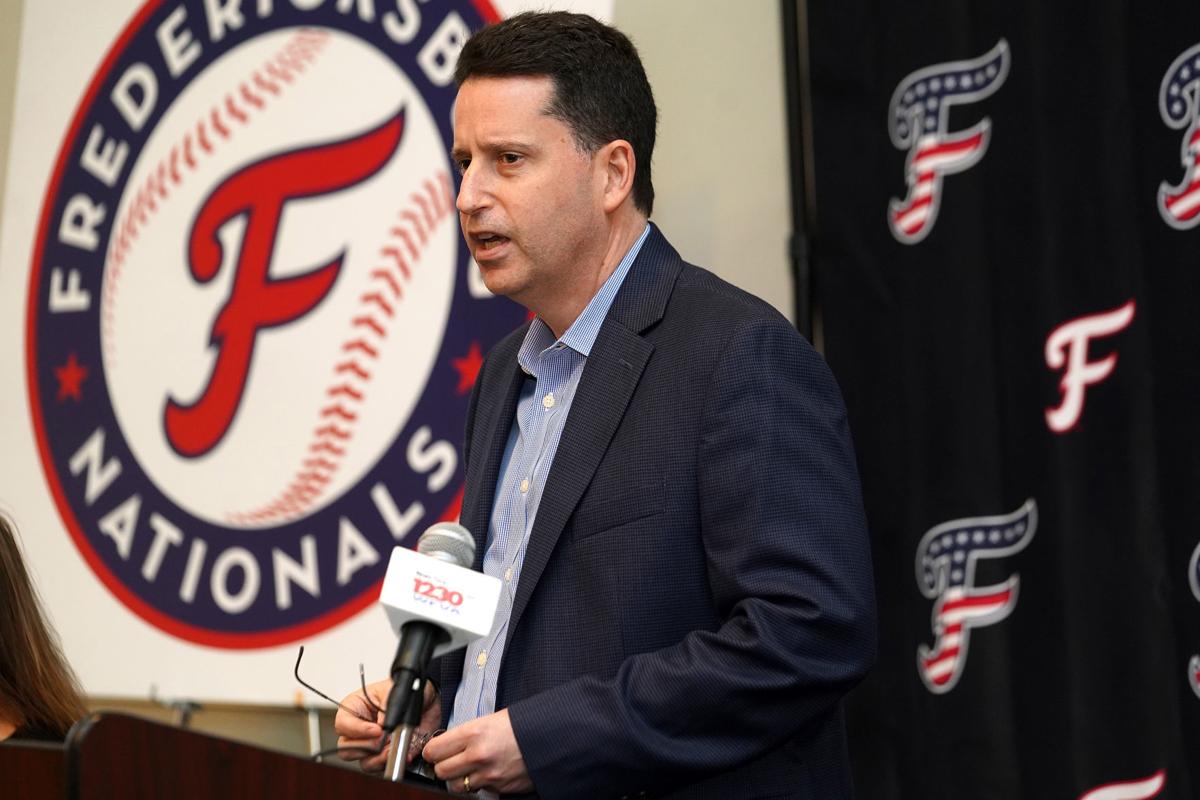 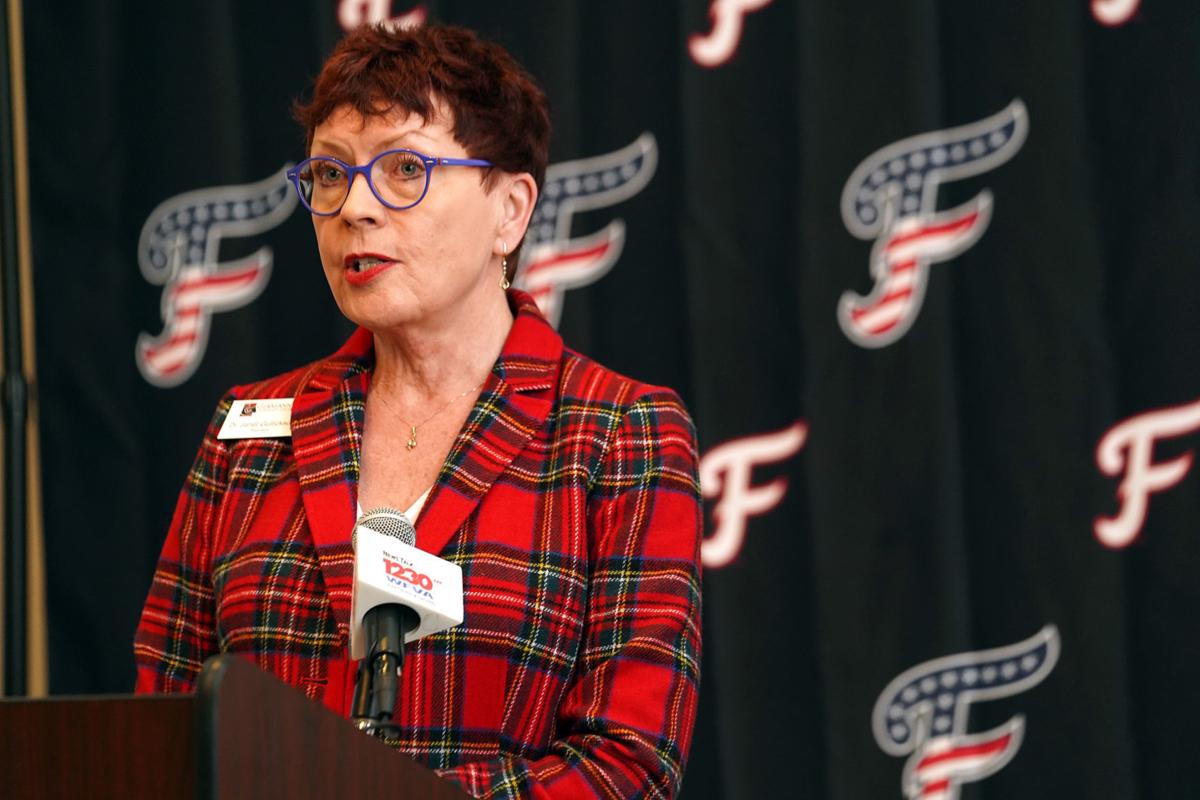 Seth Silber, Fredericksburg Nationals’ treasurer, and Germanna President Janet Gullickson detail a partnership between the school and the city’s new baseball team during an event Wednesday. 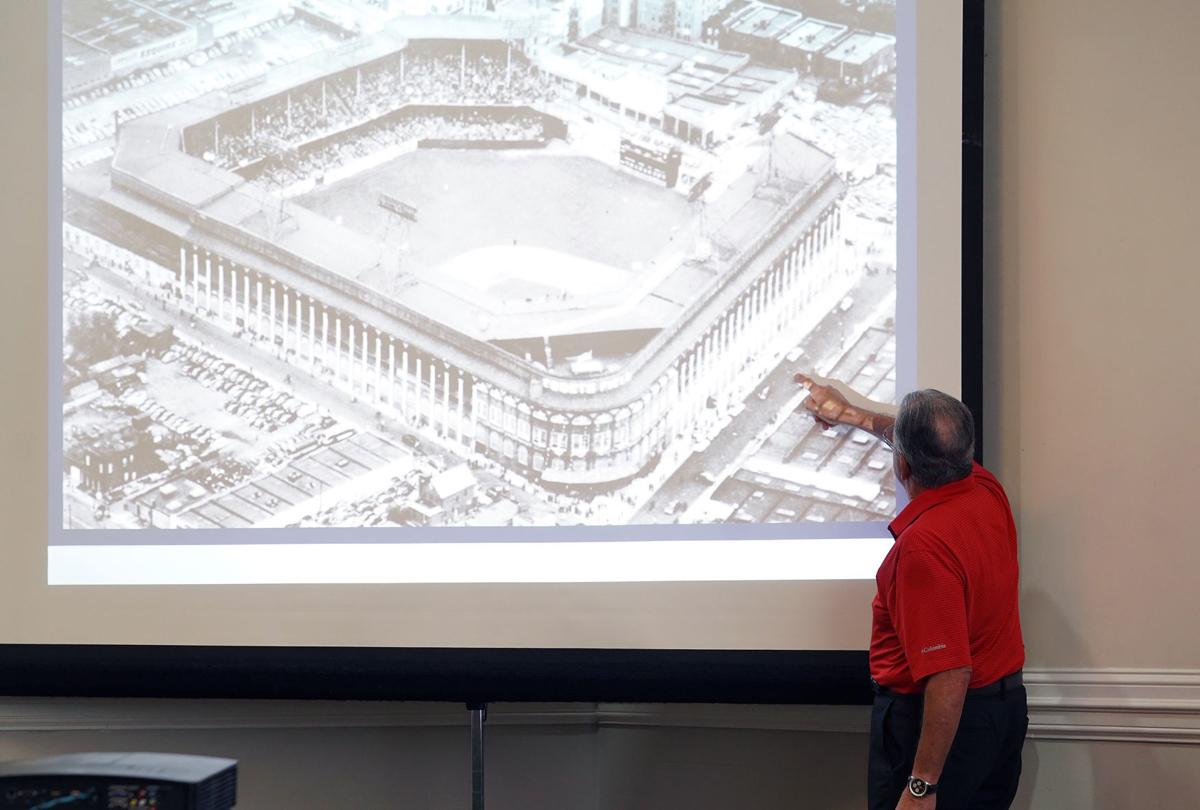 Art Silber shows the path outside Ebbets Field in Brooklyn he walked many times as a boy with Jackie Robinson. His relationship with Robinson fostered a sense of the importance of social justice and the role baseball can play in society. 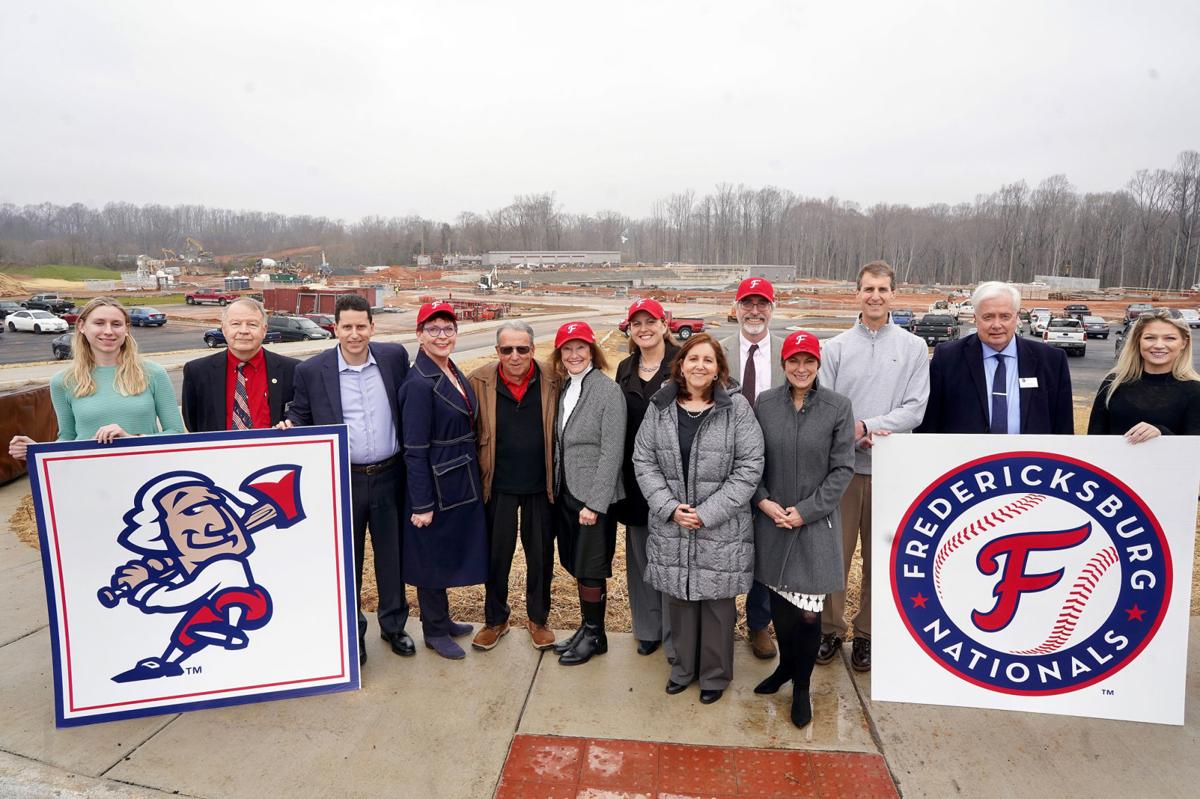 Germanna and FredNats personnel near ballpark site after announcement. 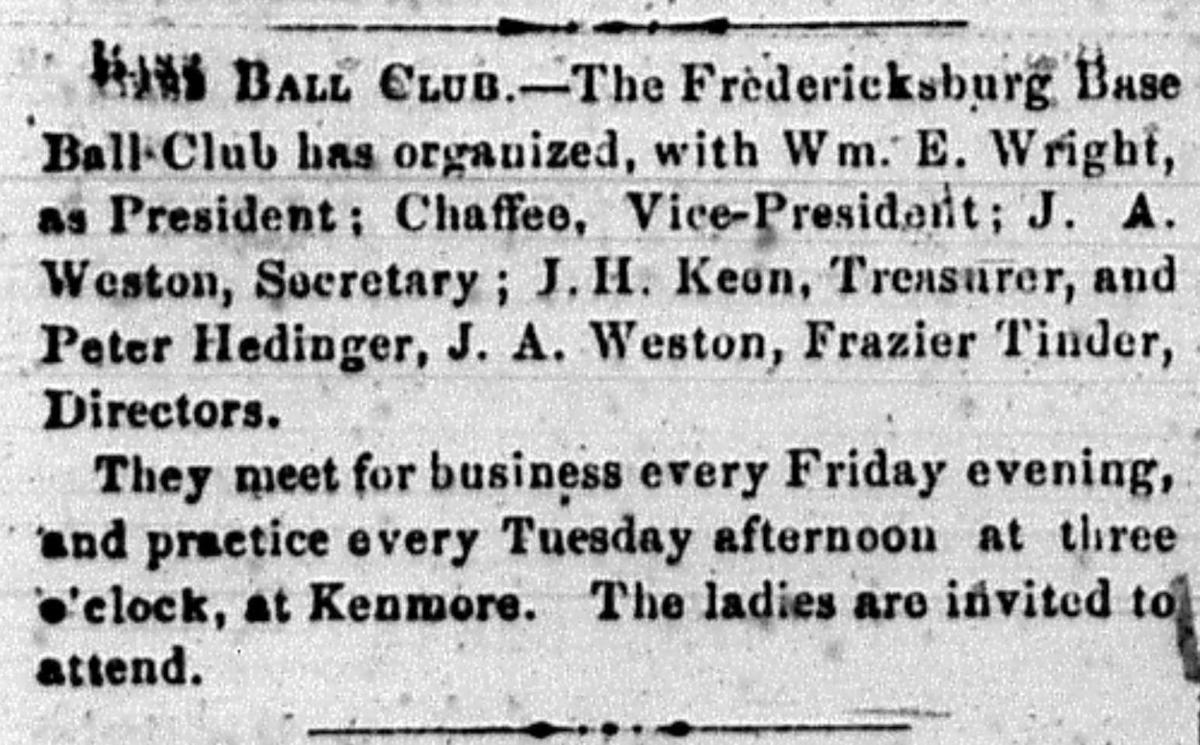 An advertisement for the first baseball team in Fredericksburg in 1866. 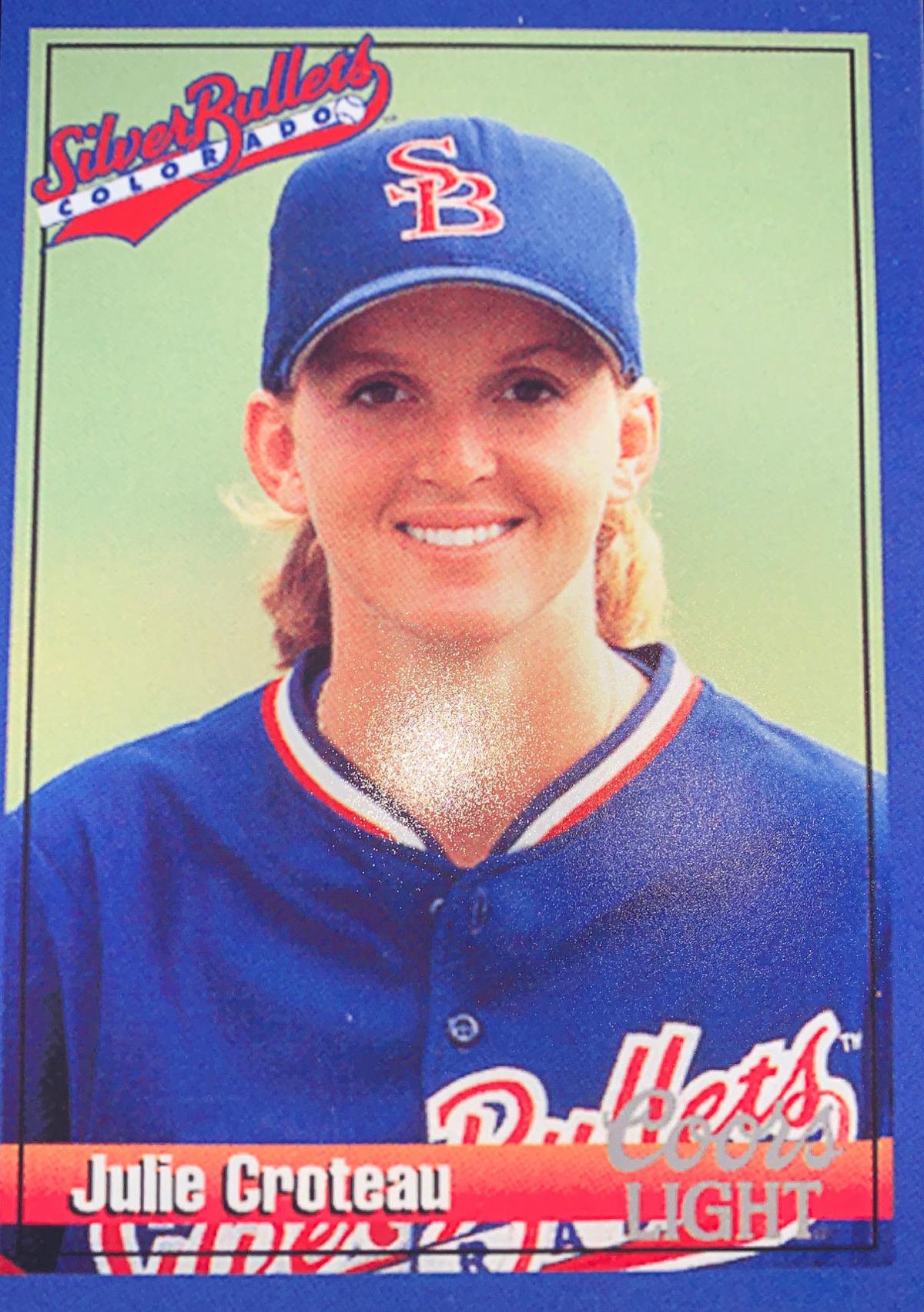 The Fredericksburg White Sox, a semi-professional ball club, is pictured in 1924.

Seth Silber, Fredericksburg Nationals’ treasurer, and Germanna President Janet Gullickson detail a partnership between the school and the city’s new baseball team during an event Wednesday.

Art Silber shows the path outside Ebbets Field in Brooklyn he walked many times as a boy with Jackie Robinson. His relationship with Robinson fostered a sense of the importance of social justice and the role baseball can play in society.

Germanna and FredNats personnel near ballpark site after announcement.

An advertisement for the first baseball team in Fredericksburg in 1866.

When the Silber family, owners of the Fredericksburg Nationals, first visited the city at the beginning of the process of bringing the team here, they had no idea how much history they would find.

“We were overwhelmed by the history here,” said Seth Silber, team treasurer and son of chairman and CEO Art Silber.

Running alongside Fredericksburg’s colonial, Revolutionary and Civil War history is a history of baseball in the city, which the FredNats plan to emphasize for visitors to the new stadium through a partnership with Germanna Community College, the Fredericksburg Area Museum and Dovetail Cultural Resource Group.

“I keep thinking of three words—‘history,’ ‘baseball’ and ‘Fredericksburg,’ ” Silber said. “They are all interconnected, and by finding these partners, we have been able to bring that to life.”

On May 29, fans attending a game at the team's new stadium—currently under construction in Celebrate Virginia South near the Fredericksburg Expo Center and scheduled to be completed April 23—will see the unveiling of an 80-foot history display installed on the back of the “batter’s eye,” the dark area beyond the center field wall that allows a batter to see a pitched ball against an uncluttered background.

The wall will display a timeline of Fredericksburg’s history, with call-outs identifying significant events in the city’s baseball history and a birds-eye view of all the places in the city where the game has been played.

The history timeline will be part of a history pavilion that will also contain a FredNats Wall of Fame.

“Like many other organizations in the area, Germanna is a Fredericksburg Nationals sponsor,” said Mike Zitz, Germanna’s special assistant to the president for media relations and public affairs.

“Instead of paying for a big sign with our slogan and logo on the center field fence, we opted to begin a five-year educational partnership with the FredNats, Dovetail and FAM. We believe its emphasis on teaching local history, with a focus on baseball’s local and national history of breaking down societal barriers, will be beneficial to our students and to the area.”

Research for the timeline was conducted by Dovetail Cultural Resource Group and the History Pavilion is being developed with the Fredericksburg Area Museum.

Dovetail’s president, Kerry Barile, outlined some of the important events in the city’s baseball history at Wednesday’s press conference.

Artifacts unearthed at Ferry Farm show that ball games—specifically the Native American game of chunkey, which involved throwing spears at disc-shaped stones—have been played in the Fredericksburg area for millennia, Barile said.

During the Civil War, Union and Confederate soldiers at Fredericksburg would play baseball in their camps on either side of the Rappahannock, and would watch each other play from across the river, said Zitz, who is also an area baseball historian.

In 1866, an advertisement was placed in the Fredericksburg Ledger for the town’s first organized baseball club.

In 1908, the city welcomed its first professional baseball team, the Fredericksburg White Sox. Though the team reverted to semi-professional status after just one year, it continued to play in the city, with a hiatus during World War I, through the 1930s, first at a stadium on Hanover Street and then at Gouldman Park on Winchester Street.

Another semi-professional team, the Fredericksburg Giants, was established in 1988 and played until 2007. One of the early players on that team was 17-year-old Julie Croteau, who sued her high school in 1988 for not allowing her to play on the boys’ baseball team.

She lost that court battle, but spent six years with the Fredericksburg Giants and became the first woman to play NCAA men’s baseball. Croteau also appeared as a baseball double for one of the actresses in the film “A League of Their Own,” and her glove and picture are permanently displayed at the Baseball Hall of Fame in Cooperstown, N.Y.

Barile said Dovetail plans to continue its research in year two through five of its partnership with the FredNats to tell the stories of some of the African-American baseball teams from the area, which include the Blues, the White Caps and the Grays.

Germanna’s President Janet Gullickson spoke Wednesday of the “barriers blown up” by sports, as exemplified by Croteau’s story and that of Jackie Robinson, the first African American to play in Major League Baseball, and an idol of Art Silber’s.

Gullickson said Germanna is also dedicated to removing the barriers that prevent many economically disadvantaged or minority populations from achieving higher education.

To meet this goal, the partnership between the community college and the baseball team will also include the Jackie Robinson Writing Contest and Scholarship. The contest is open now to area high school juniors and seniors, who are asked to write a 500-word essay about how they have used one of the nine values Robinson said were key to his success in the face of extreme challenges to deal with a problem in their own life.

Five contests winners will receive $1,042 scholarships to Germanna—the extra $42 is a nod to Robinson’s jersey number.

The FredNats partnership with Germanna will also include tickets to games for Germanna students, free baseball clinics at the stadium and video segments on Fredericksburg baseball history that will be narrated by Germanna students and shown during games.

The partnership also includes fundraising for Germanna’s Gladys P. Todd Academy, which gives economically disadvantaged and first-generation college students in Fredericksburg and Spotsylvania the opportunity to graduate from high school with their associate’s degrees.

“There is nothing like baseball to make you feel grounded in America, regardless of your background,” Gullickson said. “This team will be such a convener of goodwill in our community.”