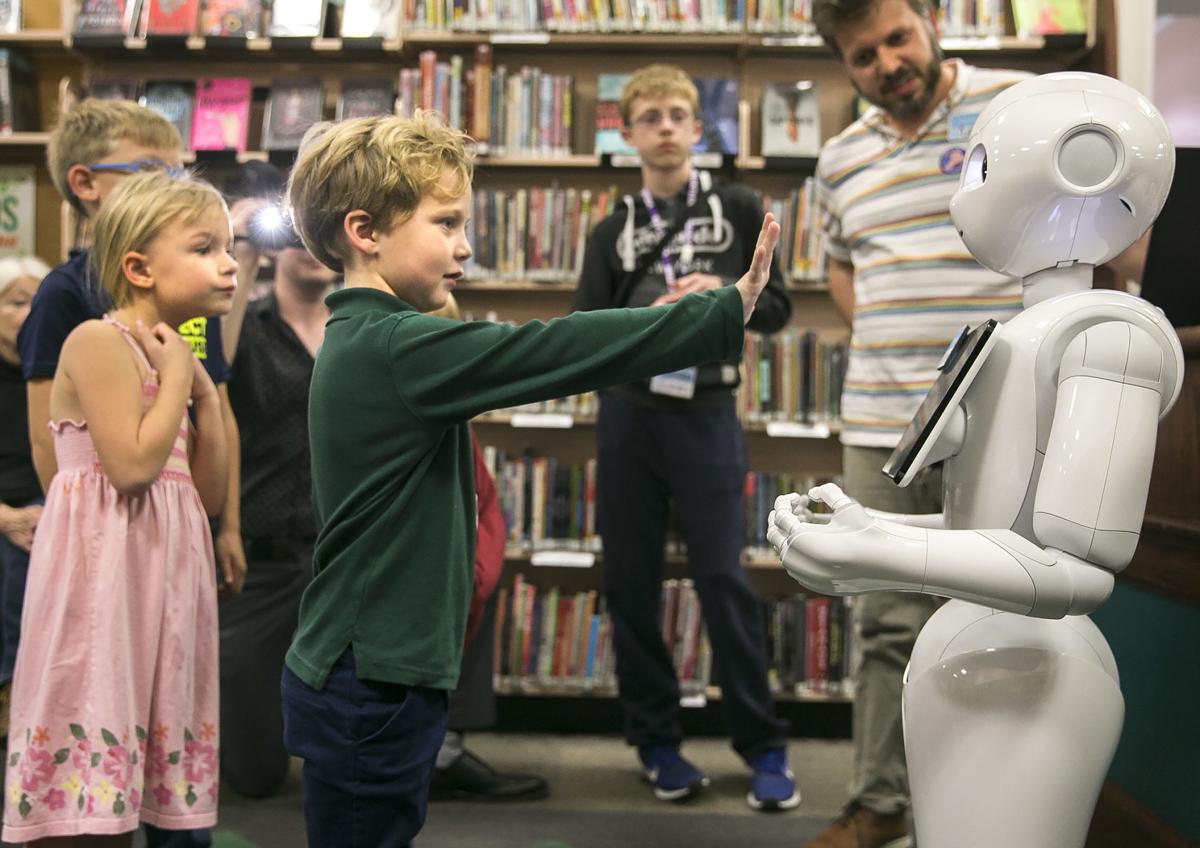 Reid Satterwhite, 5, greets Pepper the robot during its debut at the Fredericksburg branch of the Central Rappahannock Regional Library. Pepper is programmed to interact with patrons, answer questions and more. 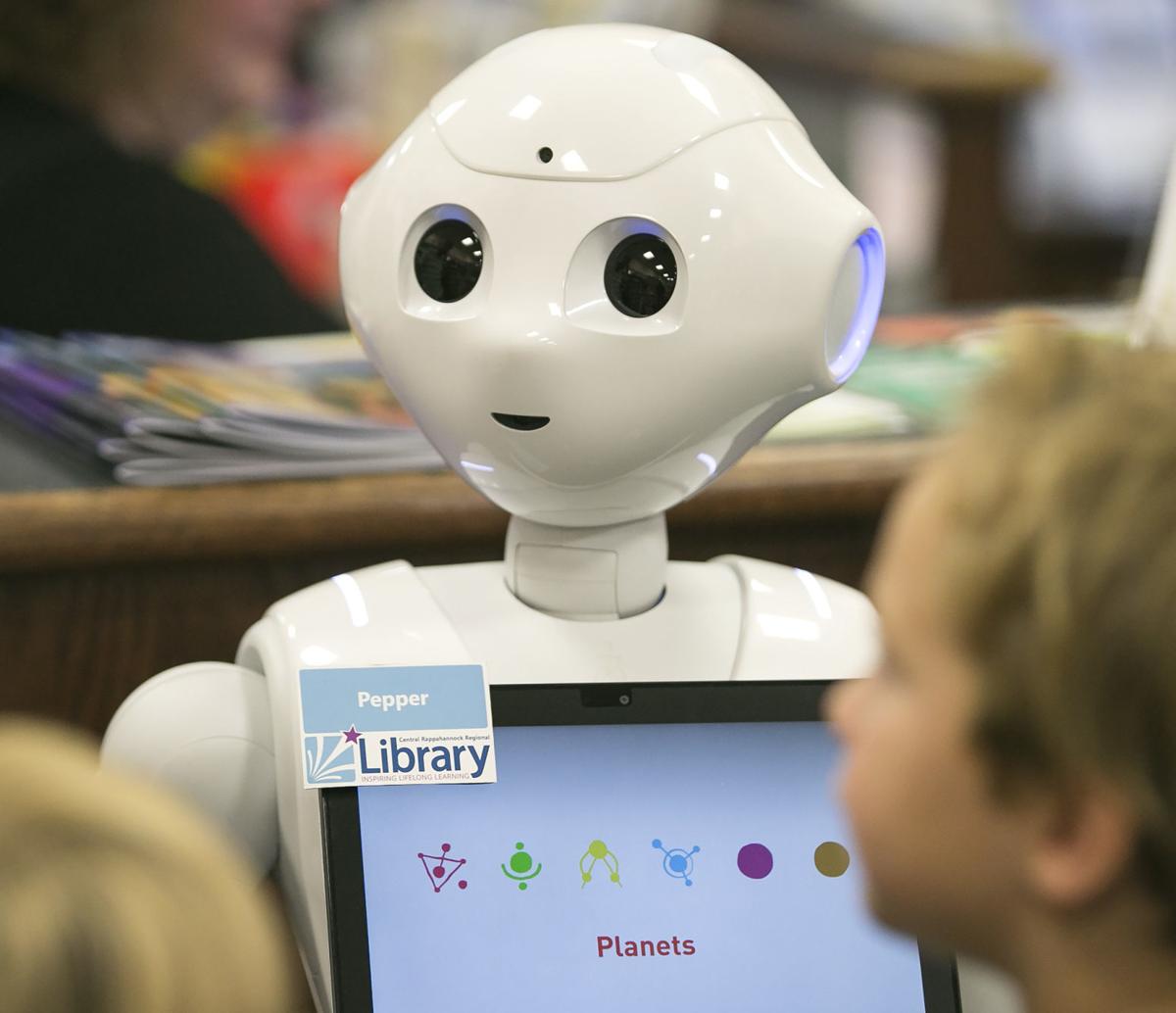 Pepper will be making appearances at other library branches this month. 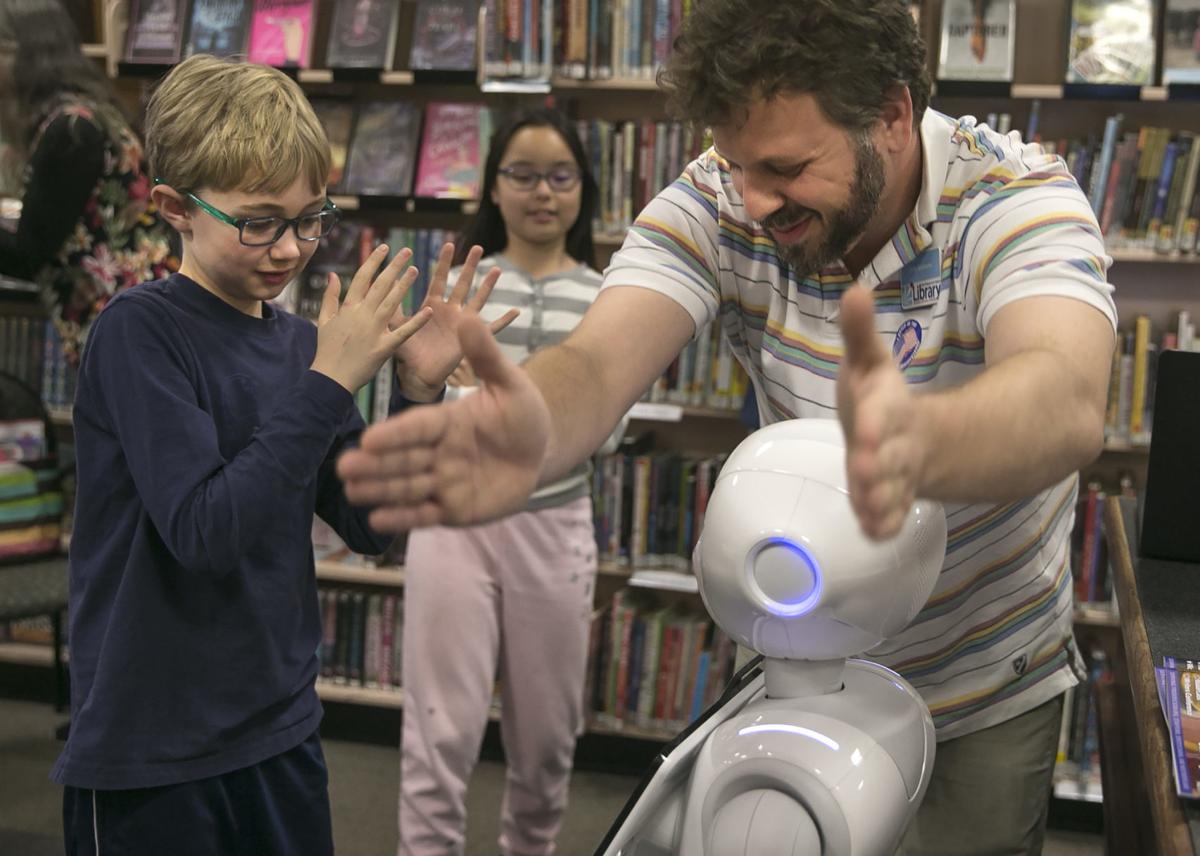 Grayson Rhines, 10, and Craig Graziano, head of youth services at the Central Rappahannock Regional Library’s Fredericksburg Branch, try to follow the commands of Pepper the robot.

Reid Satterwhite, 5, greets Pepper the robot during its debut at the Fredericksburg branch of the Central Rappahannock Regional Library. Pepper is programmed to interact with patrons, answer questions and more.

Pepper will be making appearances at other library branches this month.

Grayson Rhines, 10, and Craig Graziano, head of youth services at the Central Rappahannock Regional Library’s Fredericksburg Branch, try to follow the commands of Pepper the robot.

Pepper’s eyes lit up at the children who gathered at the Fredericksburg branch of the Central Rappahannock Regional Library to meet the robot.

“I like humans,” Pepper said. “Humans are so cute!”

Pepper, a SoftBank robot that was purchased by the library for its MakerLab program, was making its first stop Tuesday on a tour of all of the library’s branches. Pepper’s software is designed to work with children in an educational capacity in libraries and schools.

Reid Satterwhite, 5, was among more than a dozen children captivated by Pepper’s début. He enjoyed opening and closing Pepper’s humanistic fingers, thought it was funny when Pepper said he looked like a cucumber and described Pepper as a “fun friend.”

Pepper is designed to recognize human faces, but only if the user smiles. Pepper prompts the user to smile, and explains to children that they look like a rectangle or a cucumber until they do.

Pepper is anthropomorphic from the waist up, and has a tablet on its chest that displays visuals. Its bottom half spins around on wheels, and it has certain points on its body that respond when touched.

The robot can sense motion within the span of its open arms, and can even sense people’s moods.

“It’s kind of interesting to see a robot interacting [with people], unlike some of the machines and robots that don’t really have a personality,” Layla said. “I’d describe him as friendly, fun, curious and bubbly.”

Pepper was purchased for $30,000, which was provided by the University of Mary Washington, Germanna Community College and some private donors.

Craig Graziano, MakerLab manager and head of youth services for the Fredericksburg branch, said he hopes Pepper will be used for storytelling opportunities, but the library is navigating copyright issues that may come with using certain books.

“It may be that we partner with a local author and the illustrations could show up on the [tablet] while Pepper is programmed to say the text,” said Graziano. He also noted that Pepper could be programmed to tell folktales and other texts in the public domain.

Pepper can be programmed to read any text. Layla enjoyed typing messages for Pepper to read aloud, including “that tickles” and “meow.”

“On a basic level, we can show the rudiments that go into programming a robot. Coding is something we’ve always wanted to get off the ground at our MakerLabs,” he said.

Graziano said another opportunity the library is looking into would be similar to the Paws to Read program, where children can read to dogs. In this case, children would read to Pepper.

It wasn’t just young children who were fascinated by Pepper. Autumn Mullins, 18, was excited that she had stumbled upon the event while she was hanging out at the library.

“I saw them rolling the robot out and I was like ‘What is that?’” Mullins said. “I had no idea Pepper was going to be here today, but I’m so glad she was, because she’s absolutely adorable.”

Mullins said she thought Pepper could appeal to people of all ages, and wished she’d had opportunities with similar artificial intelligence when she was in school.

“Pepper is extremely advanced, and it’s really cool that normal people can now have access to advanced technology,” she said.

The Stafford sessions will run from 3:30–5:30 p.m.; the one in Spotsylvania will be from 3–5 p.m. Graziano said Pepper will be brought to the smaller branches of the library in January, and those dates will be posted on the library website.

Graziano said that after the tour, Pepper will be housed primarily at IdeaSpace, the library’s new digital media lab scheduled to open in the winter at 1616 Princess Anne St., but the robot will probably return to the various library branches for certain events.

Those interested in attending one of the events should be aware that Pepper can also pick up on conversations between others in the room.

“Make sure you write a good article on Pepper!” Pepper exclaimed toward the end of the event.