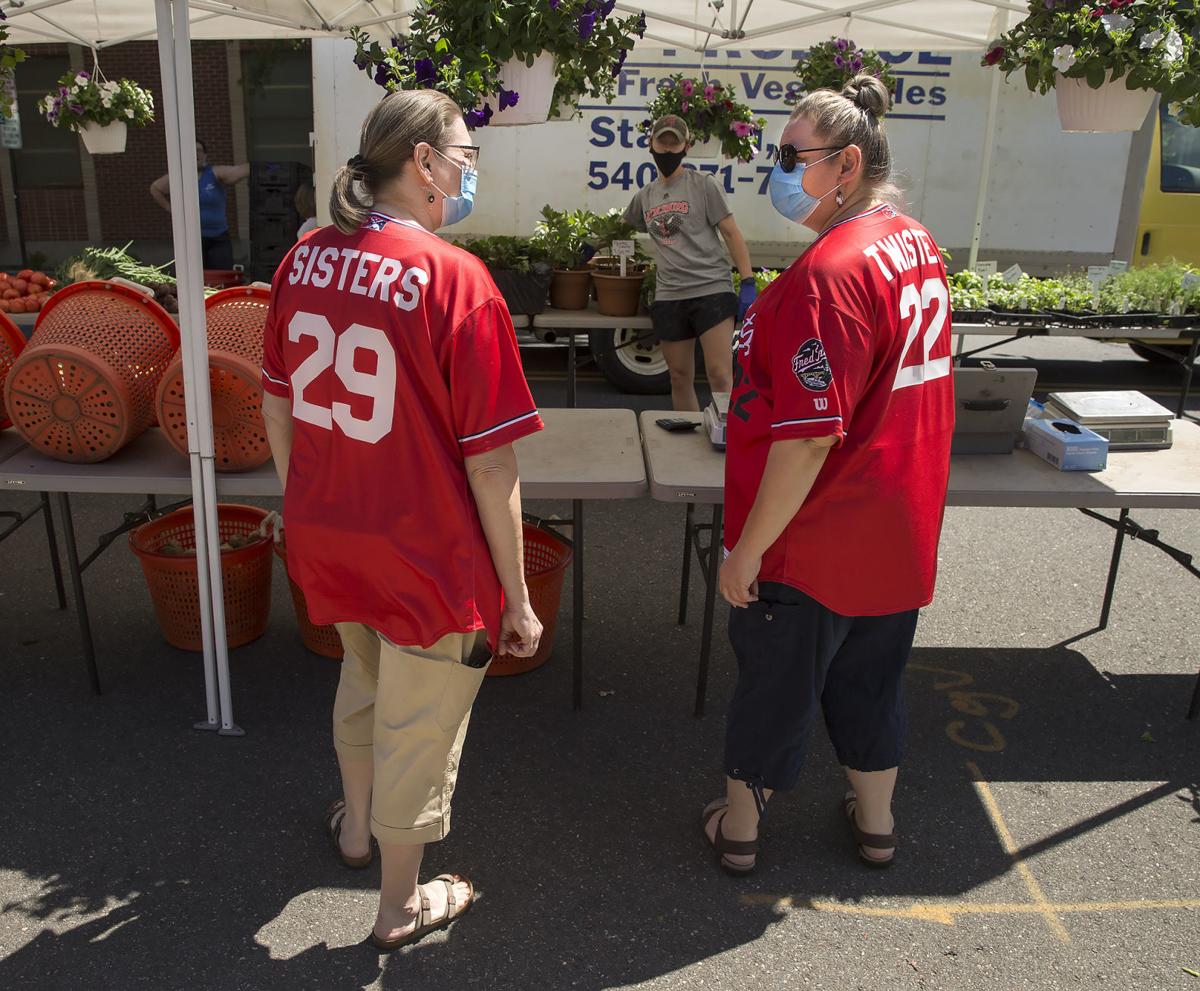 Laura Roberts (left) and her sister, Mindy Littleton, contemplate a purchase from C&T Produce at the Fredericksburg Farmers Market, which reopened Saturday amid new safety measures. 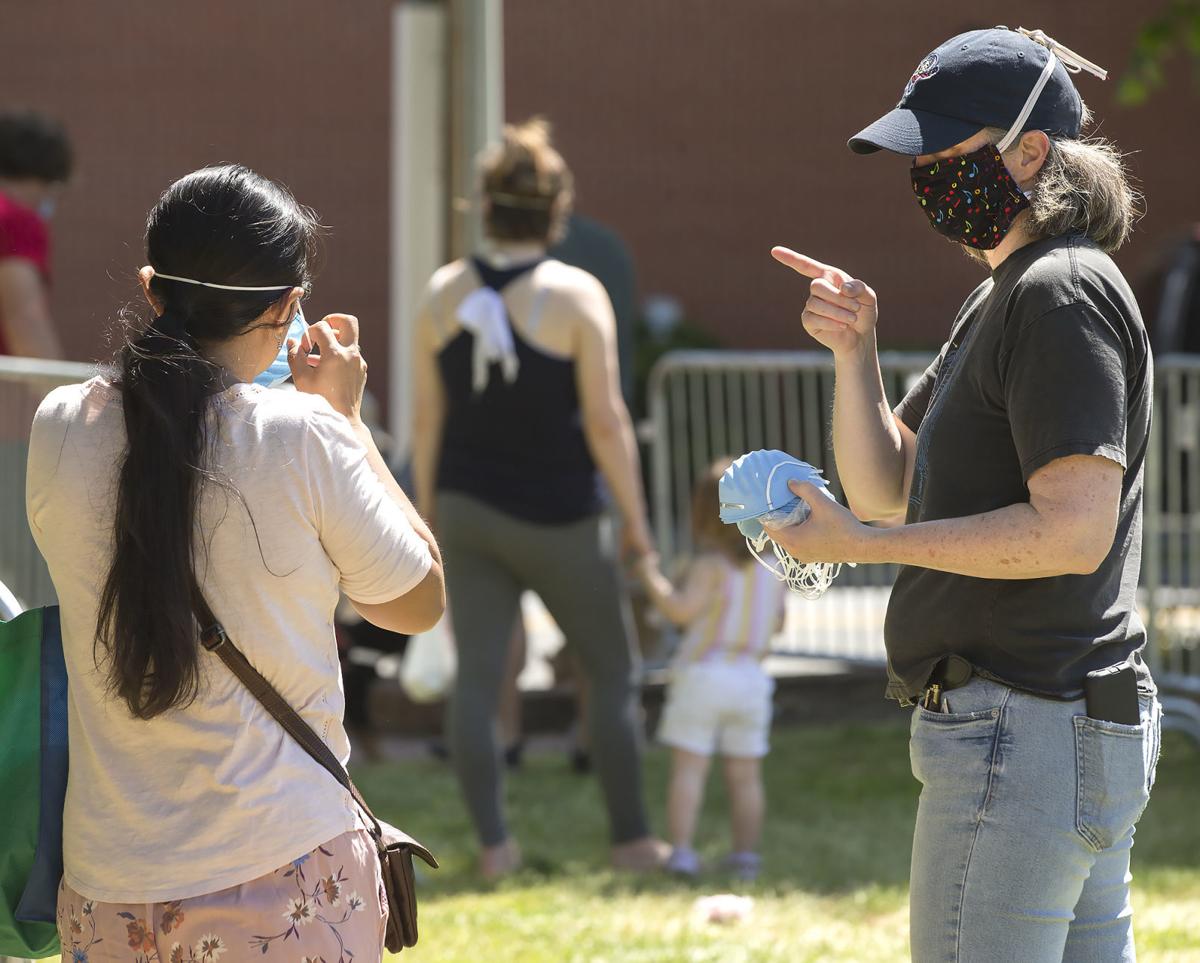 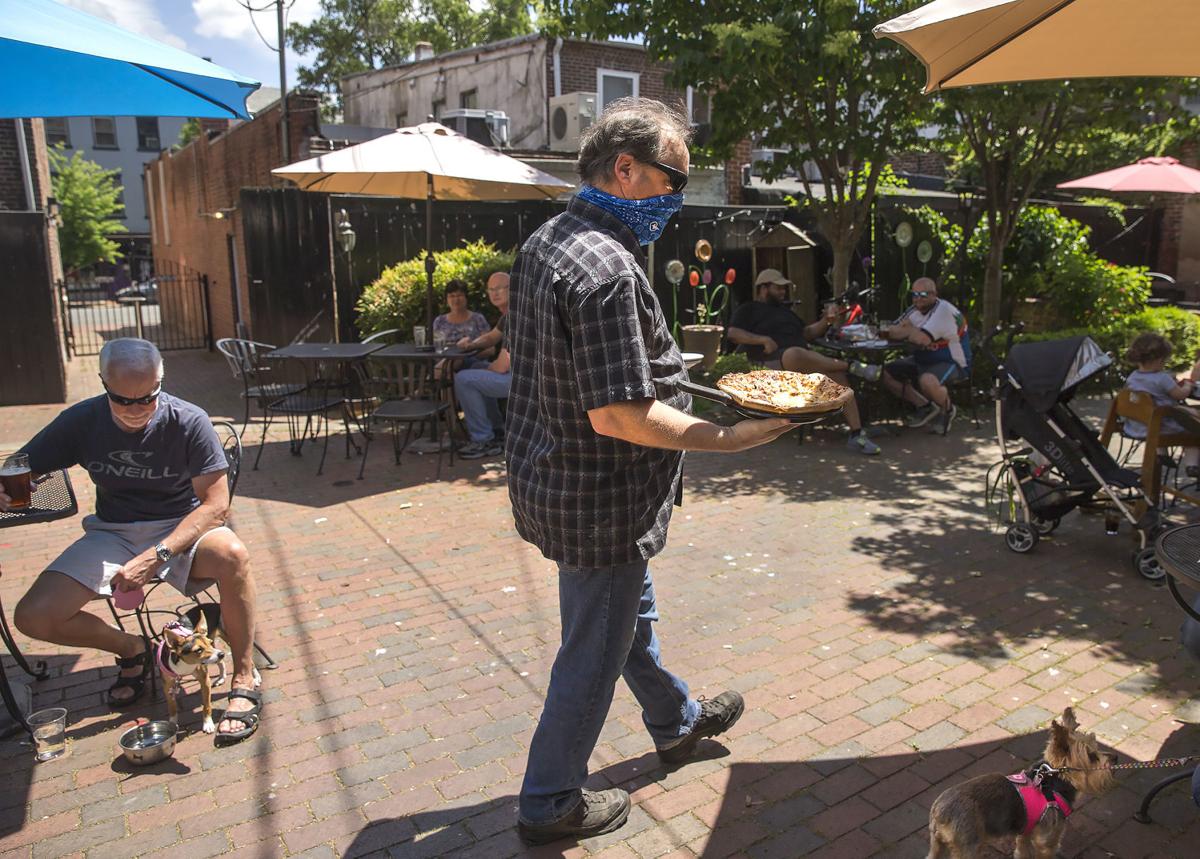 Laura Roberts (left) and her sister, Mindy Littleton, contemplate a purchase from C&T Produce at the Fredericksburg Farmers Market, which reopened Saturday amid new safety measures.

Mary McIntosh’s greeting to shoppers as the Fredericksburg Farmers Market reopened Saturday morning was a sign of COVID-19 times.

“Welcome to the Farmers Market, pandemic edition,” the former market manager told a couple of people who’d been directed to her spot in the middle of Hurkamp Park.

McIntosh was volunteering as gatekeeper on the first day the market opened under Phase I of Gov. Ralph Northam’s Forward Virginia guidelines, which require all market employees and vendors to wear face coverings and take social distancing measures.

She handed out masks donated by AmeriCorps to those shoppers who’d arrived without one, and asked people to wait in line until enough other shoppers had made their purchases and left. Then she allowed those in line to either go to the area where they could pick up orders or to vendors’ booths, where they could point to, but not touch, what they wanted to purchase.

“Some were reluctant to wear masks, but we feel that is helping everyone,” said Market Manager Wendy Stone. “I do think people have been, for the most part, very receptive. Everyone has come with the right attitude and been very patient.”

A few people began arriving when the market opened at 7 a.m., and traffic picked up about 8:30 a.m., which is normal, she said. Still, the market was getting only a third of the amount of shoppers that it usually gets by midmorning, and nobody had to wait more than five minutes before being allowed to walk over to a vendor booth.

Former Fredericksburg Mayor Bill Beck and his wife were among those waiting their turn. They’d come to get local strawberries and plants.

“I wanted to get honey, too, but the honey girl’s not here,” Beck said.

Virginia began allowing nonessential businesses in most parts of the state to begin reopening Friday under the governor’s guidelines, yet not all are ready or able to resume even this partial return to normality. Only a handful of downtown Fredericksburg shops looked open Saturday, although several restaurants already had customers seated at their outdoor patios by lunchtime.

The new guidelines allow retailers to limit occupancy to 50 percent of the lowest load listed on their certificate of occupancy. Restaurants can begin offering dine-in services, but only in their outdoor spaces.

David Fraser said that he never closed Fraser Wood Elements, his shop at 1023 Caroline St. Instead, he asked customers to make appointments, and if there were any accommodations that he could make so they’d feel safe. Some, he said, asked for orders to be dropped off in their garage. On Saturday, he left the store’s front door open, but asked customers to leave out the back door.

Spotsylvania Towne Centre, normally packed on a typical weekend, was open, but three of its anchor stores were temporarily closed, as were many other shops. Costco, which never closed, was busy. Dick’s Sporting Goods had a sign at its entrance asking shoppers not to enter if they had any of the coronavirus symptoms. And DTLR, which was having a 70 percent off sale, had a line out front because it was only letting in a few customers at a time.

The Food Court was practically empty. Only Great Steak and Chick-fil-A were open, and signs on the tables warned that they couldn’t be used by people who wanted to eat their takeout orders there. Starbucks, which is in another section of the mall, wasn’t letting customers in, but was accepting mobile orders.

The situation was much the same at The Village at Towne Centre. People were seated at Park Lane Tavern’s patio having lunch, but the handful of stores that were open, such as Arhaus and Books-a-Million, barely had any vehicles parked next to their entrances.

At Central Park shopping center, some stores such as Target and Lowe’s have remained busy, while others, such as Kirkland’s and Lazy Daisy, have just started reopening their doors. Clothes Mentor even had racks of clothing just outside its doors. Yet Kohl’s and several other retailers were either closed or offering only pickup and delivery. Best Buy was using orange traffic cones to create a lane in the parking lot so drivers could get in line for their orders.

The parking lots at the Walmart and Lowe’s in Southpoint II shopping center in Spotsylvania County were bustling, as was the patio at Kickback Jack’s restaurant, but there were few signs of activity at many of the other retail businesses.

Over at Cosner’s Corner shopping center, shoppers were going in and out of Target, but few vehicles were near the rest of the stores. Five Below did have a display of summertime items out front and a sign stating that only 30 customers were allowed inside at a time, and doors were open at Rack Room Shoes.

Other shops, such as World Market, still had signs indicating that they’re temporarily closed. So is the Planet Fitness location there, as well as in Eagle Village in Fredericksburg and at 4250 Plank Road. Phase I allows fitness centers and gyms to hold classes outside, but the chain is offering them online instead.

“At Planet Fitness, the safety of our team and members is our top priority and we are working closely with our local franchisees to determine a reopening date with that in mind,” said spokeswoman Becky Zirlen.