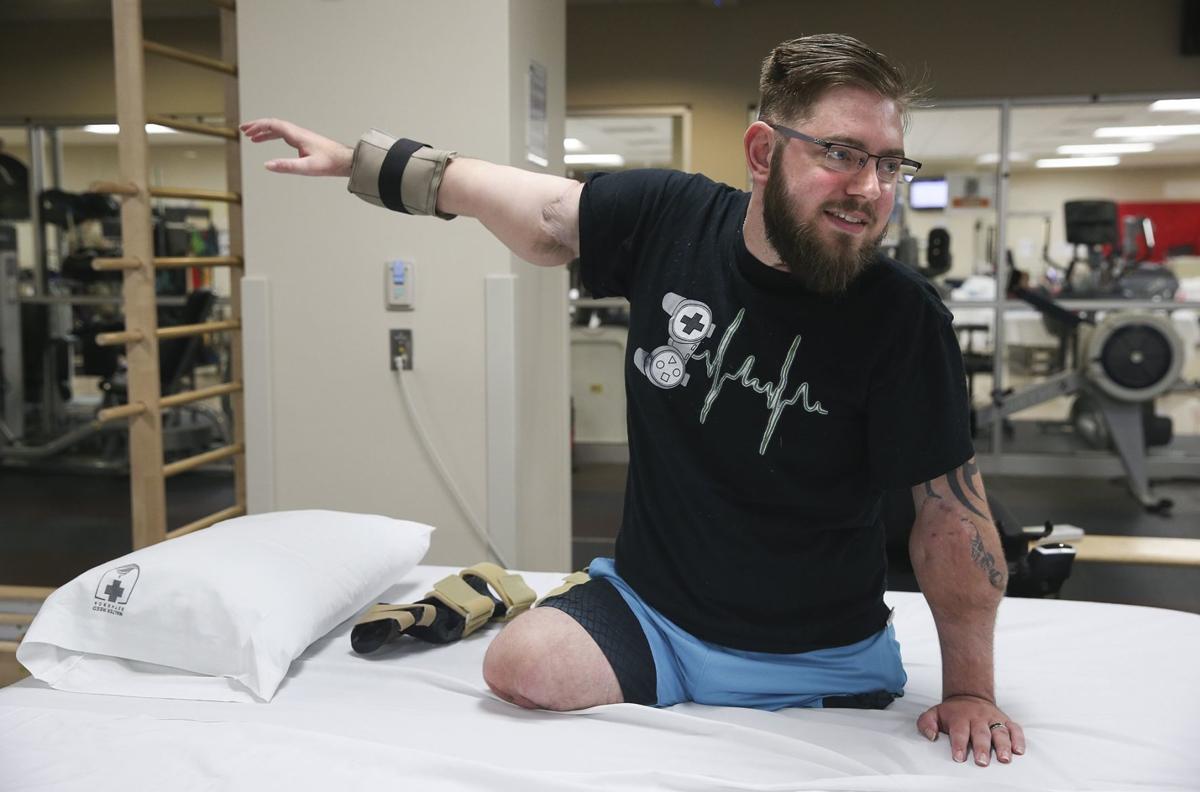 Sgt. John Peck lifts a 4-pound sandbag with his transplanted right arm at Walter Reed National Military Medical Center in October 2017. The Marine veteran, who lives in Sposylvania County, has written a book about his journey. 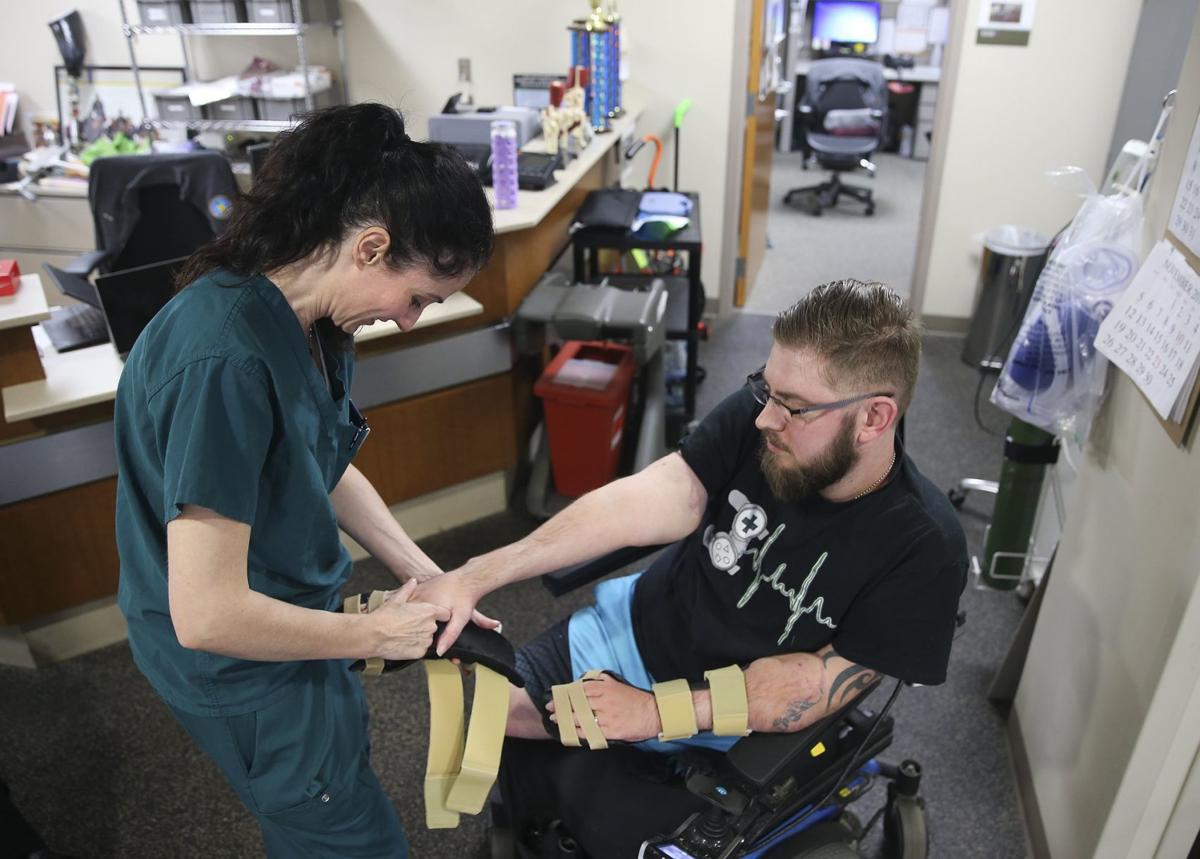 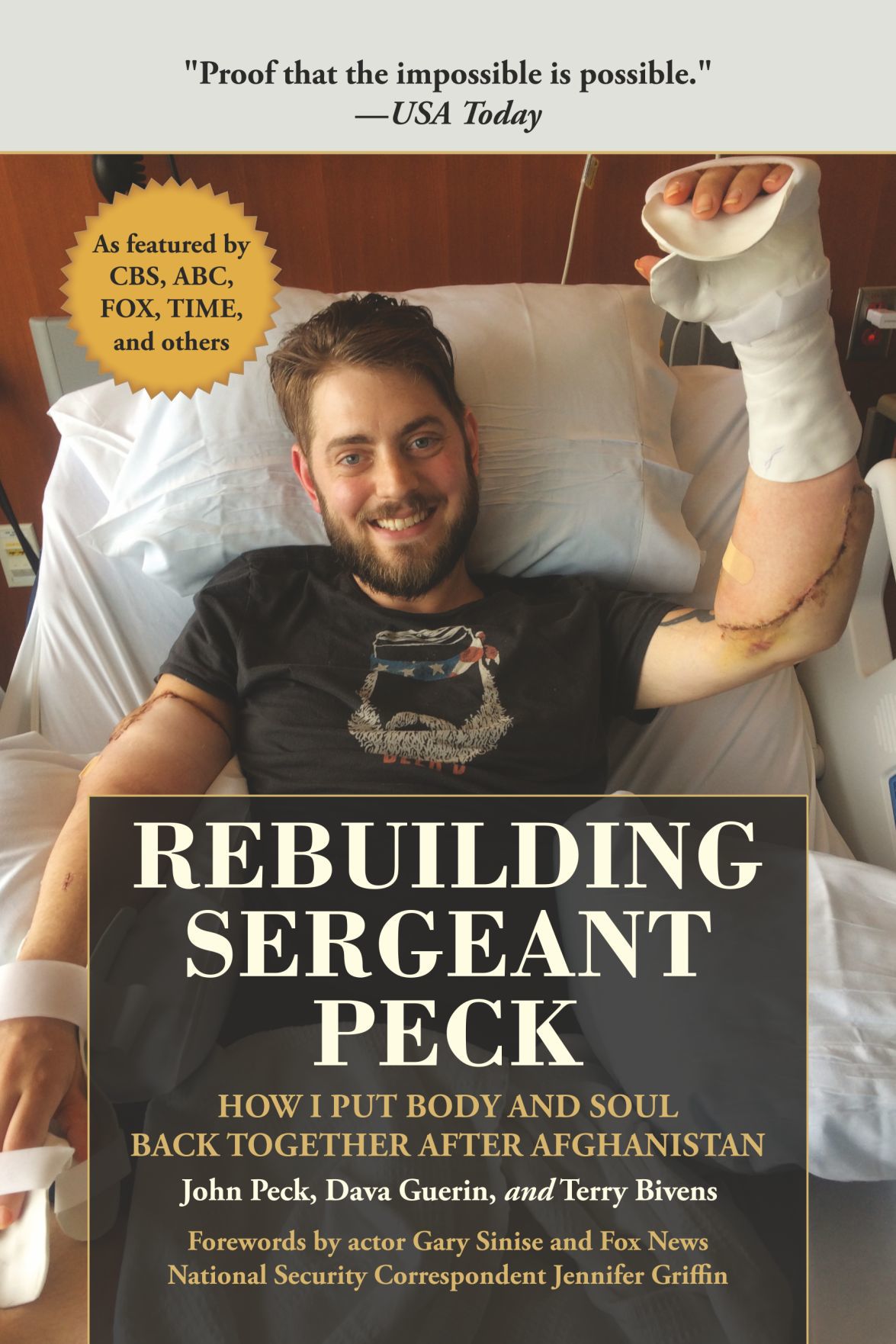 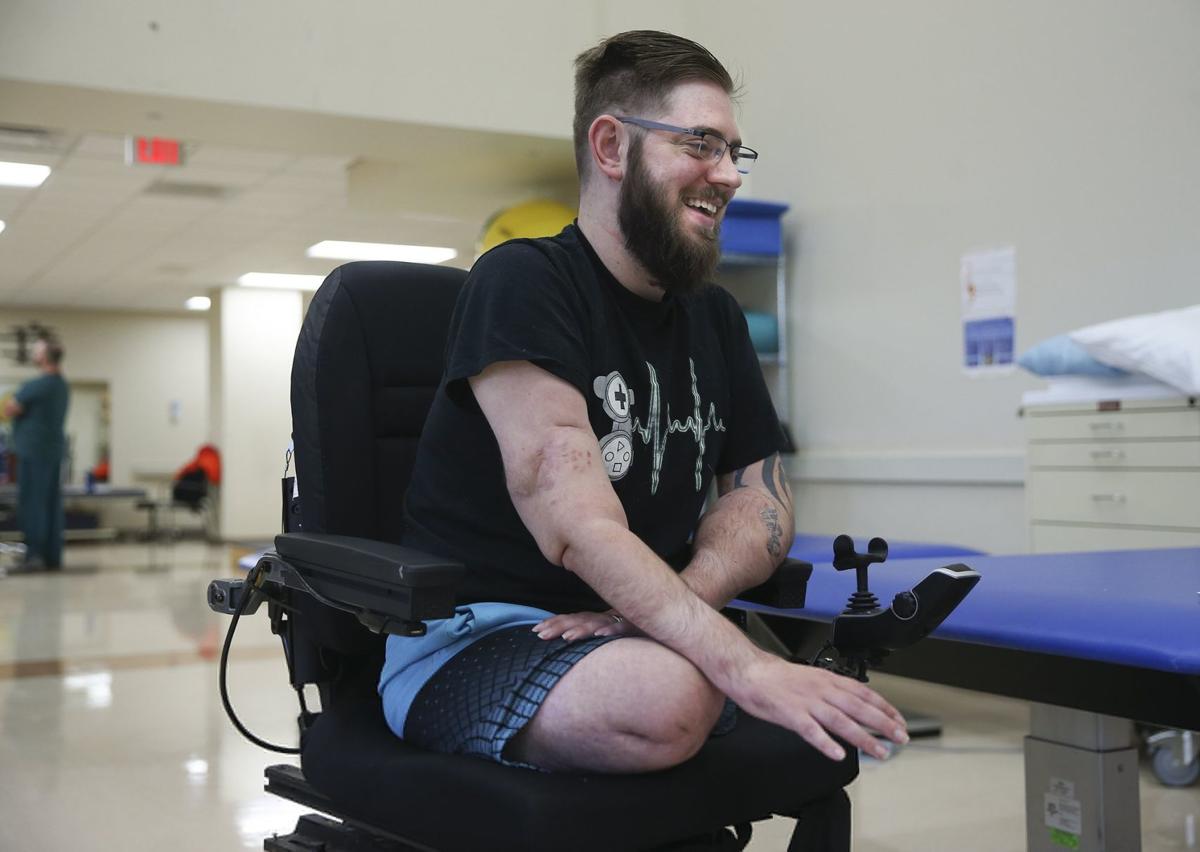 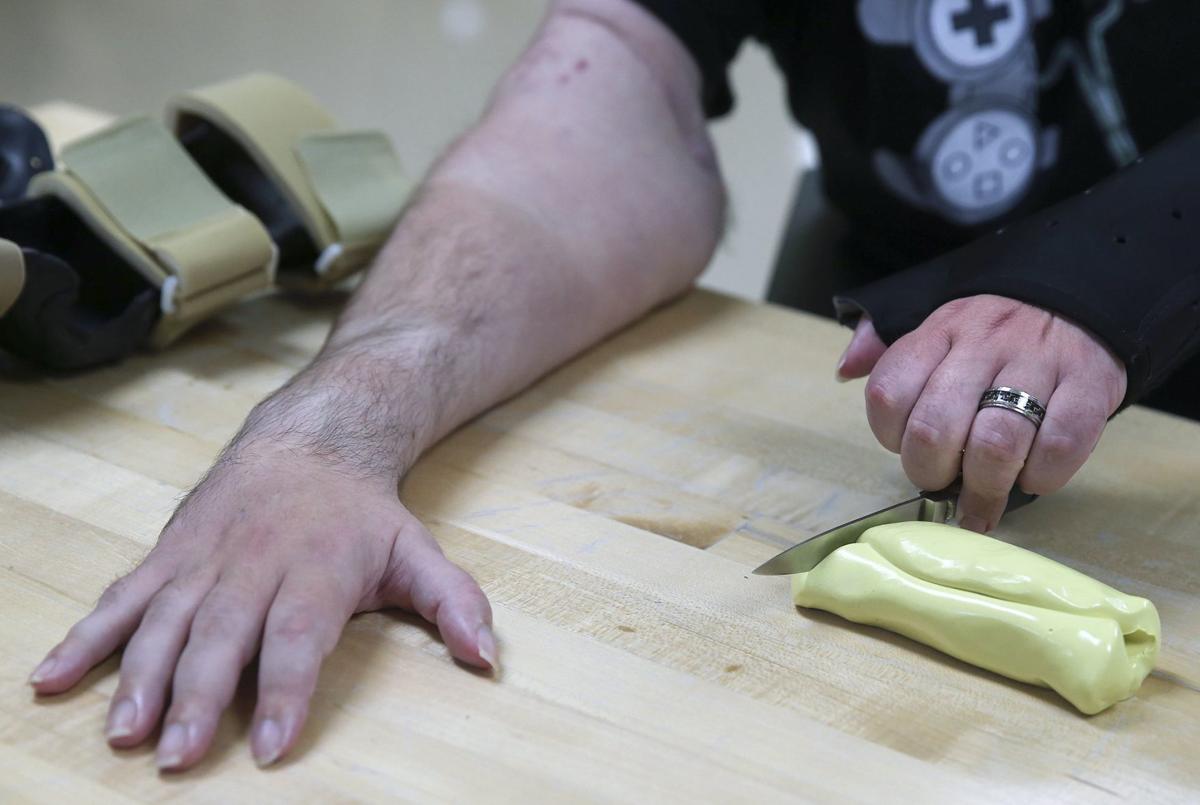 Marine Sgt. John Peck uses a modified knife to cut through putty during an occupational therapy session at Walter Reed National Military Medical Center in Bethesda, Md. Peck is one of two people to ever have a double arm transplant. He became a quadruple amputee after being injured in May 2010 when he stepped on an improvised explosive in Afghanistan. 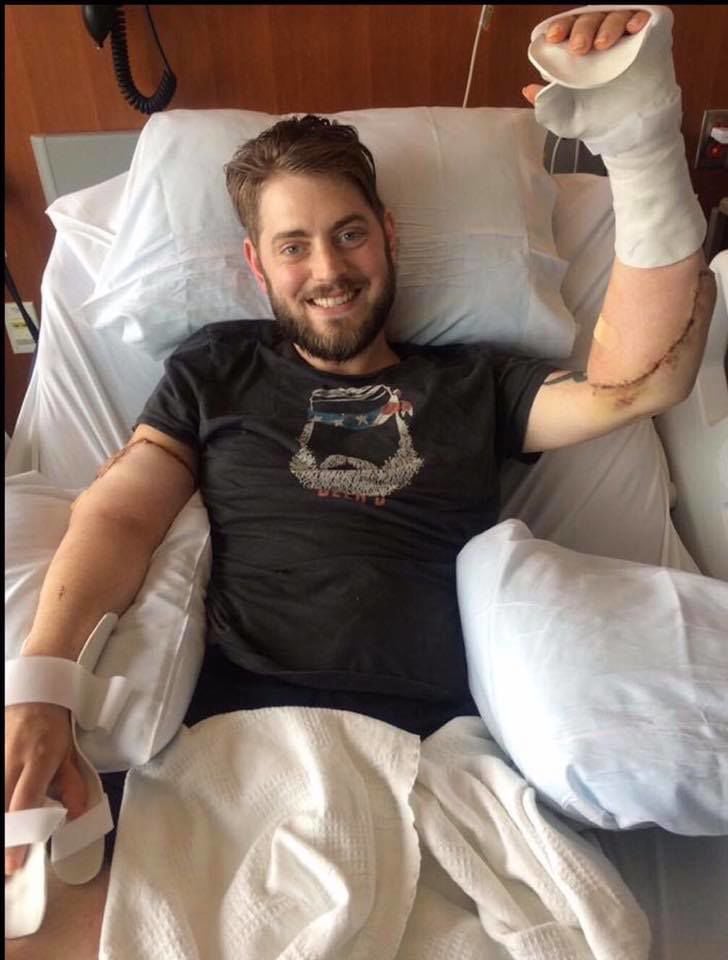 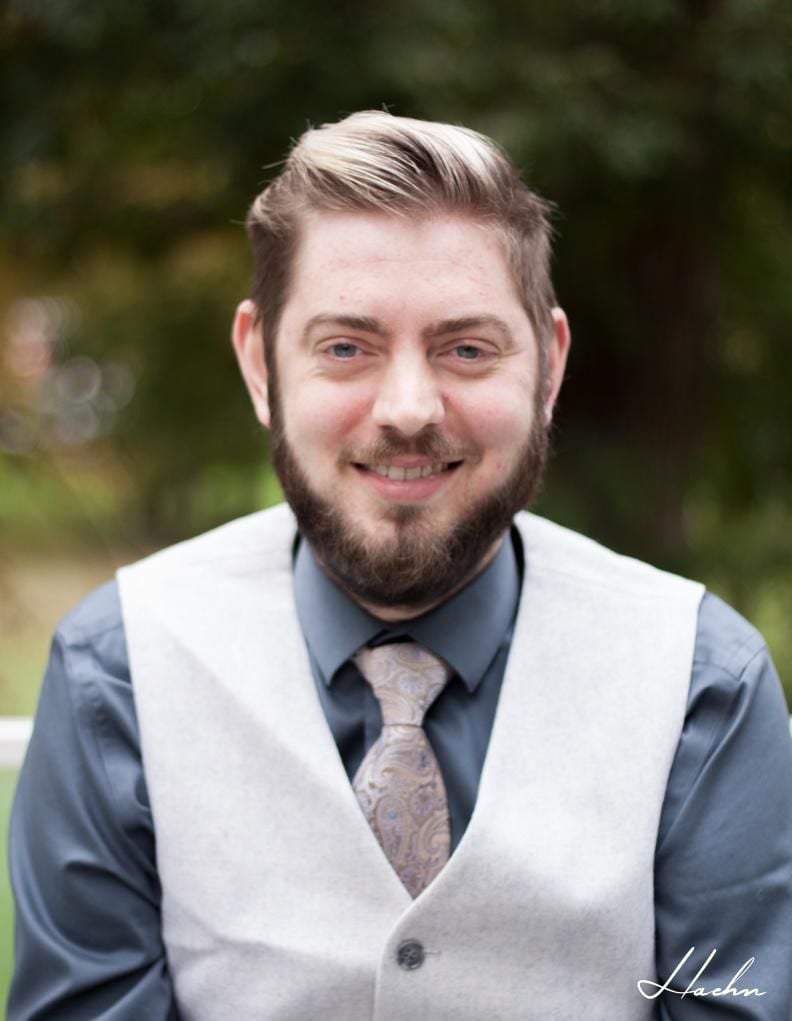 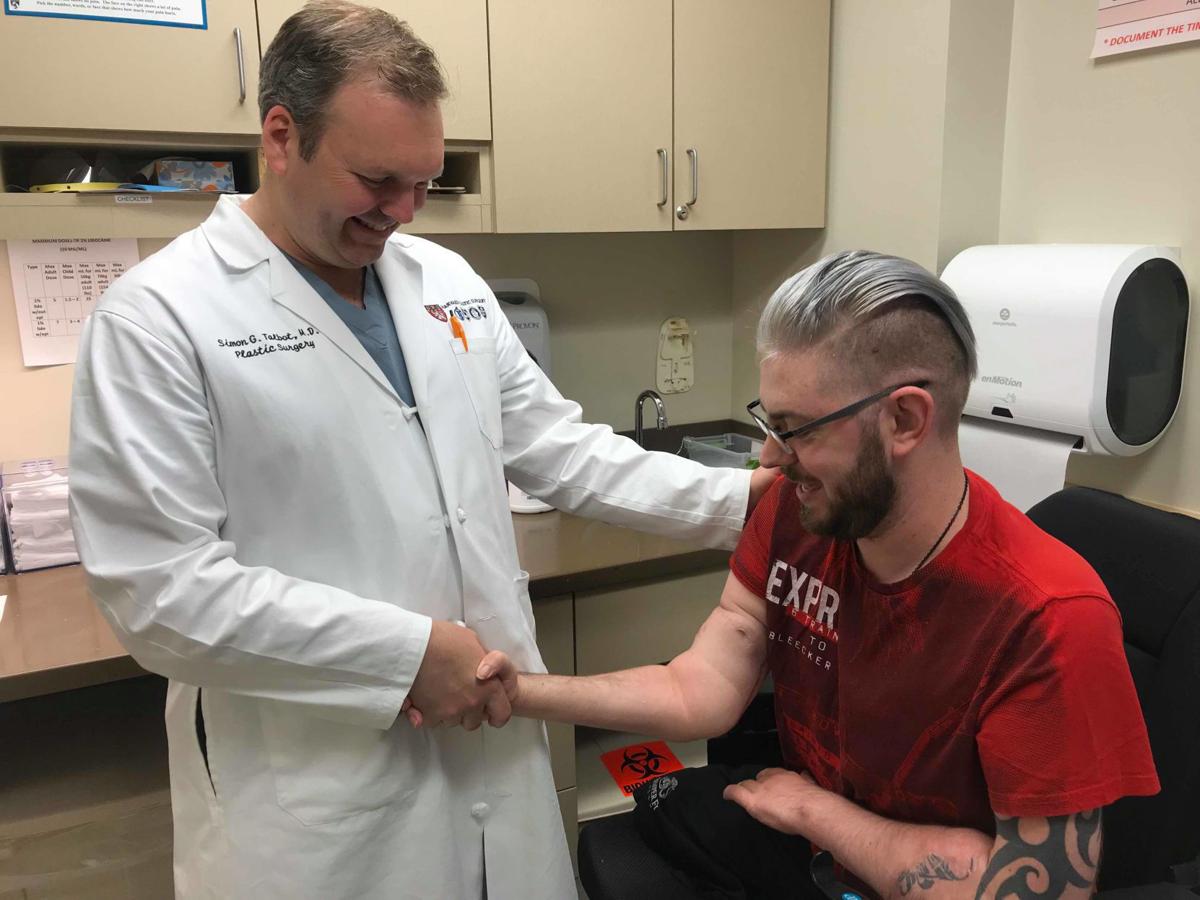 Sgt. John Peck lifts a 4-pound sandbag with his transplanted right arm at Walter Reed National Military Medical Center in October 2017. The Marine veteran, who lives in Sposylvania County, has written a book about his journey.

Marine Sgt. John Peck uses a modified knife to cut through putty during an occupational therapy session at Walter Reed National Military Medical Center in Bethesda, Md. Peck is one of two people to ever have a double arm transplant. He became a quadruple amputee after being injured in May 2010 when he stepped on an improvised explosive in Afghanistan.

Before the bomb blast in Afghanistan left him one of five quadruple amputees in the War on Terror, before the explosion in Iraq cost him his memory and his marriage, Marine Sgt. John Peck knew something about survival.

His father walked out on his family before he was old enough to remember. He and his mom, Norma, lived briefly in a women’s shelter while she scraped up enough money for their own apartment.

Even in the best of times, childhood was not easy. Norma stretched her earnings by cutting coupons from a stack of Sunday papers and visits to the local food pantry, where she traded volunteer work for provisions. To this day, Peck can still remember the taste of cheap powdered milk and feel the stinging disappointment of a Christmas morning when all he got was a blanket.

Peck, who would settle in a custom-built smart house in Spotyslvania County after a 2010 bomb blast cost him all four limbs, shares the memories that shaped him in a book he co-authored with writer Dava Guerin and journalist Terry Blivens.

“Rebuilding Sergeant Peck: How I Put Body and Soul Back Together After Afghanistan” was released by Skyhorse Publishing in May. It offers bluntly revealing glimpses into the early life and battles of a war hero that much of the world got to know following his successful double arm transplant in 2016.

But, as Peck writes, “to understand someone’s personality, you need to know their history. Mine began in chaos.”

A fleeting reunion with his birth father at age 9 ended in heartbreaking disappointment and set the stage for a troubled adolescence. The abandonment, he writes, “changed my personality. I went from a sweet kid to a terror … my anger was raging.”

He acted out in school, got into fights, stole money from his mother and set small fires in the basement. A brief stint in juvenile detention over Thanksgiving put an end to the worst of his behavior. And the trials taught him a few things.

Tired of the packaged food his mother left for him while she worked, Peck began whipping up his own recipes with finds from a nearby farmers market. For the first time, he considered the possibility of becoming a chef—a dream he refused to give up even after the loss of his limbs.

Cooking, Peck wrote, was the first thing he ever felt truly good at. The Marine Corps was the second.

Peck can’t pinpoint the precise moment he decided to become a Marine. Only that his Uncle Toby, the closest thing he ever had to a father figure, had been one, and that the terrorist attacks of Sept. 11, 2001, affected him more than he understood at the time.

He was 15, sitting in class, when he watched it unfold on TV like the rest of the world.

A few years later, he’d finished high school and had no real plan for his life. He visited a Marine recruiter and before long found himself on a plane to California for boot camp. A few months later, he returned home to Antioch, Ill., in his full Marine dress, where he strutted around town feeling prouder and luckier than he’d ever felt in his life.

“I could have never imagined at that point in time that my luck wouldn’t last,” he writes in “Rebuilding Sergeant Peck.”

Less than two years later, Peck, by then a newlywed, was in Iraq when the truck he was riding in ran over a pressure-plate IED and launched him headfirst into a machine gun.

Back home in the United States, he barely recognized his wife and struggled to recall much of anything. The marriage ended and his career in the Marines might have, as well.

But he was determined to stay in. While he worked to get better, he met the woman who would become his second wife.

Then in 2010, he deployed again—this time to Afghanistan.

There would be no going back this time.

Peck writes of the last time he would ever walk, of the blast that tore three limbs from his body and the surgery that saved his life, but cost him the one arm that remained. He writes of the months spent in the hospital, of his second wife’s abandonment—how she told him before she left that no one would ever love him.

He writes of days so dark he devised a plan to kill himself and the moment he decided that he would live after all: “Mine was a rock-hard, almost genetically engineered will to survive, a drive that has pushed me to overcome everything I faced.”

He writes about how he felt on Veterans Day 2013, when he looked out on a sea of reporters and neighbors and well-wishers and accepted the keys to a home of his own. It was just a vacant lot in Spotsylvania County’s Estates of Chancellorsville when he’d first seen it. Situated between Walter Reed National Military Medical Center in Bethesda, Md., and the Hunter Holmes McGuire VA Medical Center in Richmond, it was an ideal location.

The smart home, funded with a partnership between the Stephen Siller Tunnel to Towers Foundation and the Gary Sinise Foundation called Building for America’s Bravest, allowed Peck a measure of independence.

Sinise, perhaps best known for his role as Lt. Dan in the movie “Forrest Gump,” wrote the forward to his book.

In Fredericksburg, he received the call from the hospital in Boston that would give him back so much of what he lost.

“‘Rebuilding Sgt. Peck: Putting Body and Soul Back Together After Afghanistan’ will inspire anyone regardless of whether they serve in the military or not,” Sinise writes in the foreword.

Which is why Peck set out to write the book in the first place, he said. That and to raise awareness about the importance of organ donation.

It wasn’t for the publicity or the chance to become famous—he’s had plenty of that.

“Anybody who knows me realizes that I hate the spotlight,” Peck said. “When I’m thrust into it, I kind of shut down, lower my head and hope it ends soon.”

Three months after the book’s release, Peck said the feedback has been mostly positive—and he’s glad he wrote it. The book has helped provide the exposure he needs for his new mission in life: motivational speaker.

Peck recently learned that his new arms might never be strong enough to become a full-time professional chef.

“For the time being, I have changed course and found a new calling,” said Peck, who recently sold his Fredericksburg home to move closer to Walter Reed.

He wants to tell anyone who will listen that no matter how bad things get, no matter how terrible life may seem, there is always hope.