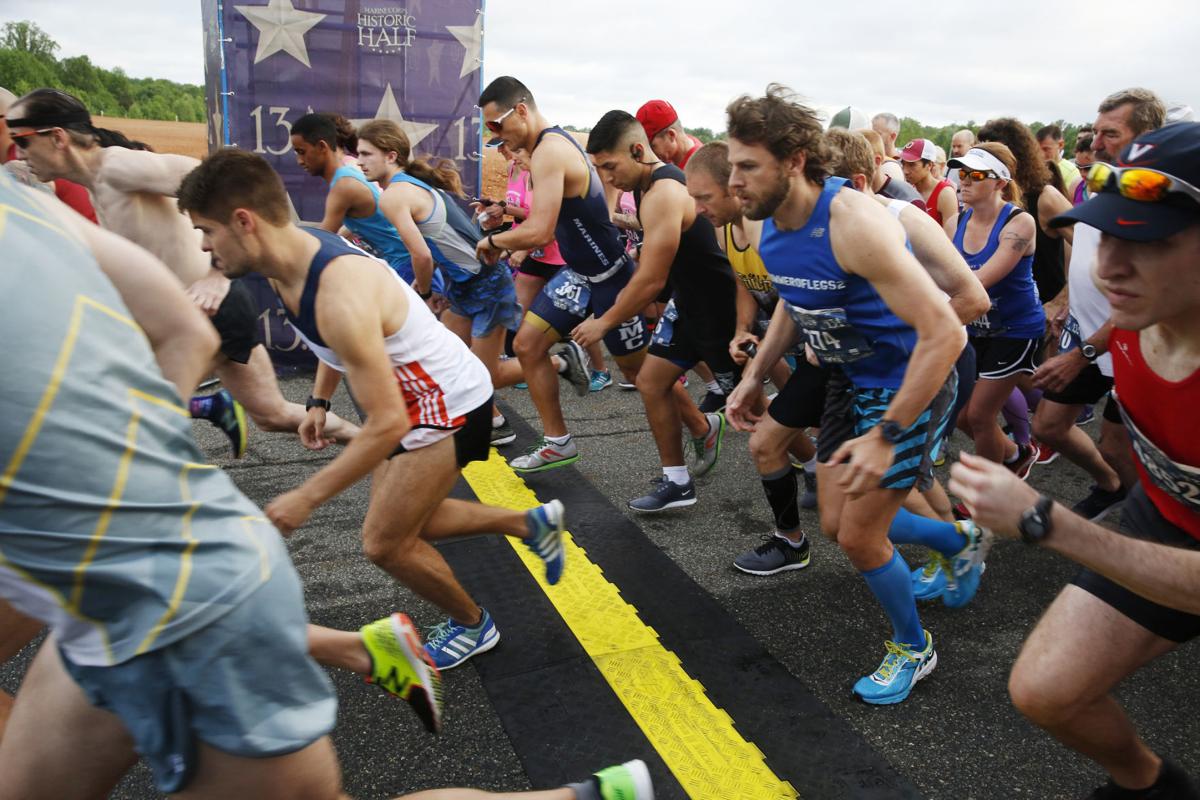 Runners pour across the starting line as the 2018 Marine Corps Historic Half gets underway. 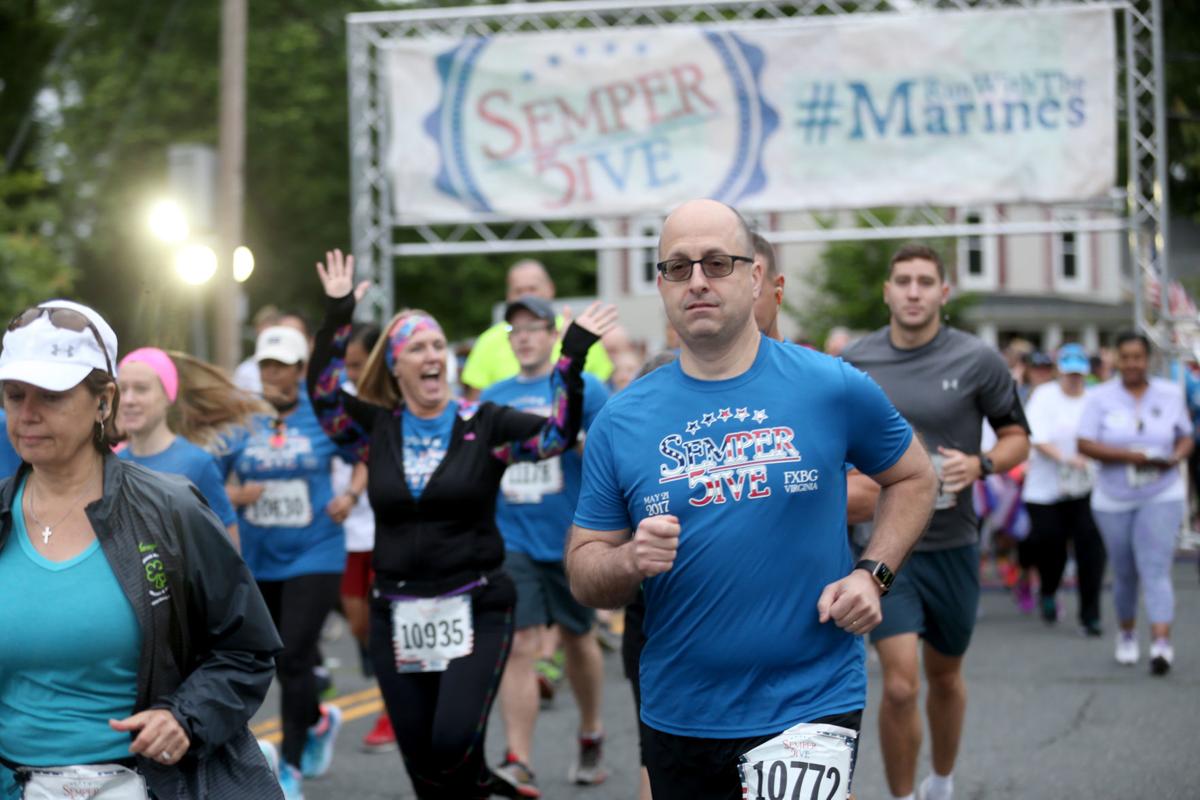 Mike Dempsey of Manassas, Virginia, starts his run in the Historic Half 5 Miler along Fall Hill Ave. The 10th Marine Corps Half Marathon runners make their way through the streets of Historic Downtown in Fredericksburg, Va. on May 21, 2017. 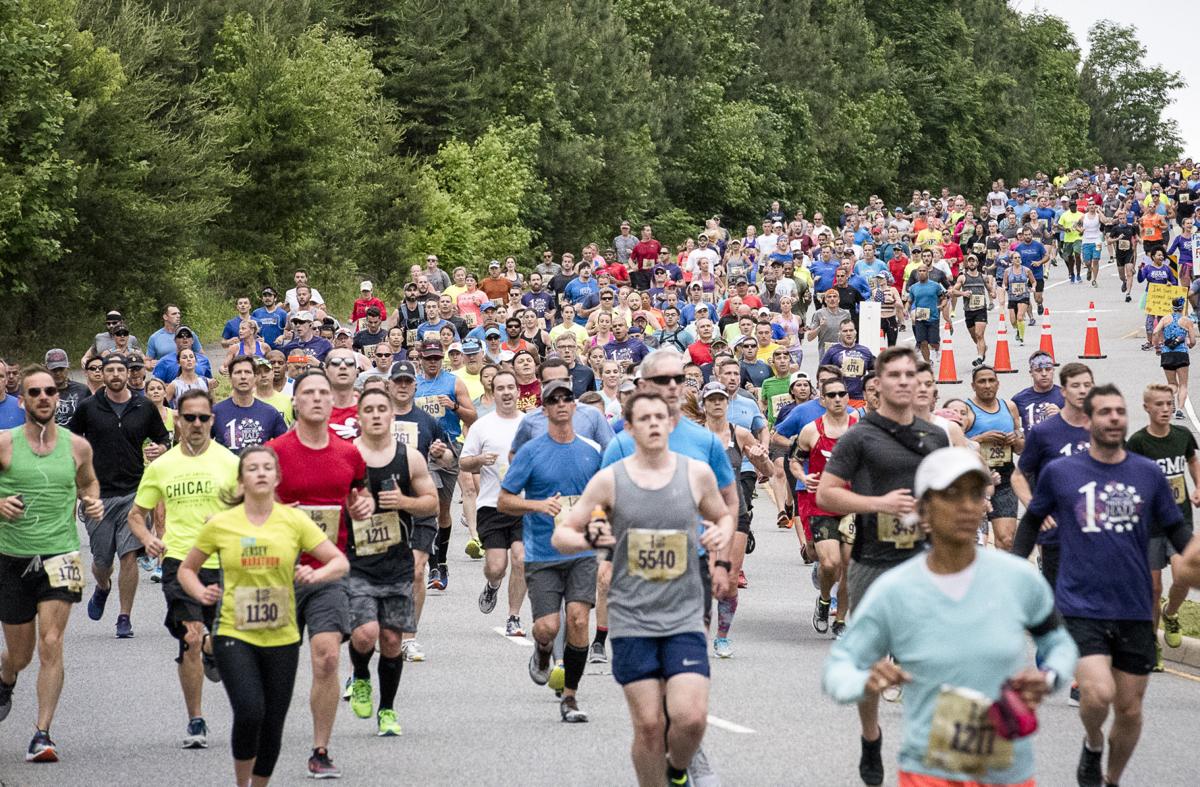 Thousands of runners head down Cowan Boulevard during the Marine Corps Historic Half in 2017.

Runners pour across the starting line as the 2018 Marine Corps Historic Half gets underway.

Mike Dempsey of Manassas, Virginia, starts his run in the Historic Half 5 Miler along Fall Hill Ave. The 10th Marine Corps Half Marathon runners make their way through the streets of Historic Downtown in Fredericksburg, Va. on May 21, 2017.

Thousands of runners head down Cowan Boulevard during the Marine Corps Historic Half in 2017.

Just more than 10 weeks remain until the fire of a musket and the blast of a Howitzer send thousands of runners on the 13.1-mile Fredericksburg course known as the Marine Corps Historic Half Marathon.

More than half the spots for the Fredericksburg race are filled, said Ashley Topolosky, public relations coordinator for the Marine Corps Marathon.

Volunteer pilots will also help herald the start of the May 19 race with a Stearman flyover—a fan favorite that will return this year, Topolosky said.

More than 6,000 runners completed the Historic Half and two companion races in 2018: the Semper 5ive, a five-mile distance run, and the Devil Dog Double, an 18.1 mile-course that combines the two. That number was down from more than 8,000 the year before thanks to temperatures that flared to make it the second-hottest race day in the Historic Half’s history.

Entering its 12th year, the Historic Half is touted as a family-friendly event situated halfway between Richmond and Washington, perfect for history buffs and just about anyone looking for a spring weekend getaway. With distance options ranging from five miles to 18.1, it’s ideal for runners¯or walkers—of all capabilities, Topolosky said.

It’s also a boon to the local economy. A 2013 economic impact report by University of Mary Washington professor Mukesh Srivastava and the Department of Economic Development and Tourism estimated the event had a local impact of at least $10.7 million.

For returning participants, the Marine Corps Historic Half weekend offers something new, with a living memorial to America’s fallen service members. Runners who want to take part can put on something blue and return to Mile 8. This also serves to bridge the gap between the military and civilian communities, Topolosky said.

This year’s race, which is hosted by the Marine Corps Marathon Organization, also includes a few changes. The start time for the Semper 5five and Devil Dog Double, which begins at Washington Avenue and James Monroe High School, moves from 7 a.m. to 6:40 a.m.

The Historic Half starts at 7 a.m. at Carl D. Silver Parkway.

The Healthy Lifestyle Expo at the Fredericksburg Expo and Conference Center has new hours: 4 p.m. to 8 p.m. Friday, May 17, and 9 a.m. to 6 p.m. Saturday, May 18. (Runners pick up their packets during this time.) The event is free and open to the public.

Also this year, said Topolosky, participants and their families will have the opportunity to purchase tickets for a VIP ticketed event at Eden Try Winery on Saturday.

Registration is open now and will continue through the Healthy Lifestyle Expo. Right now, the cost is $65 for the Historic Half; the prices goes up to $85 on May 1. The Semper 5five is $45; the Devil Dog Double is $90.

For more information or to register, visit www.marinemarathon.com/events/historic-half/event-info.

Pictures from the 11th annual running of the Marine Corps Historic Half marathon.