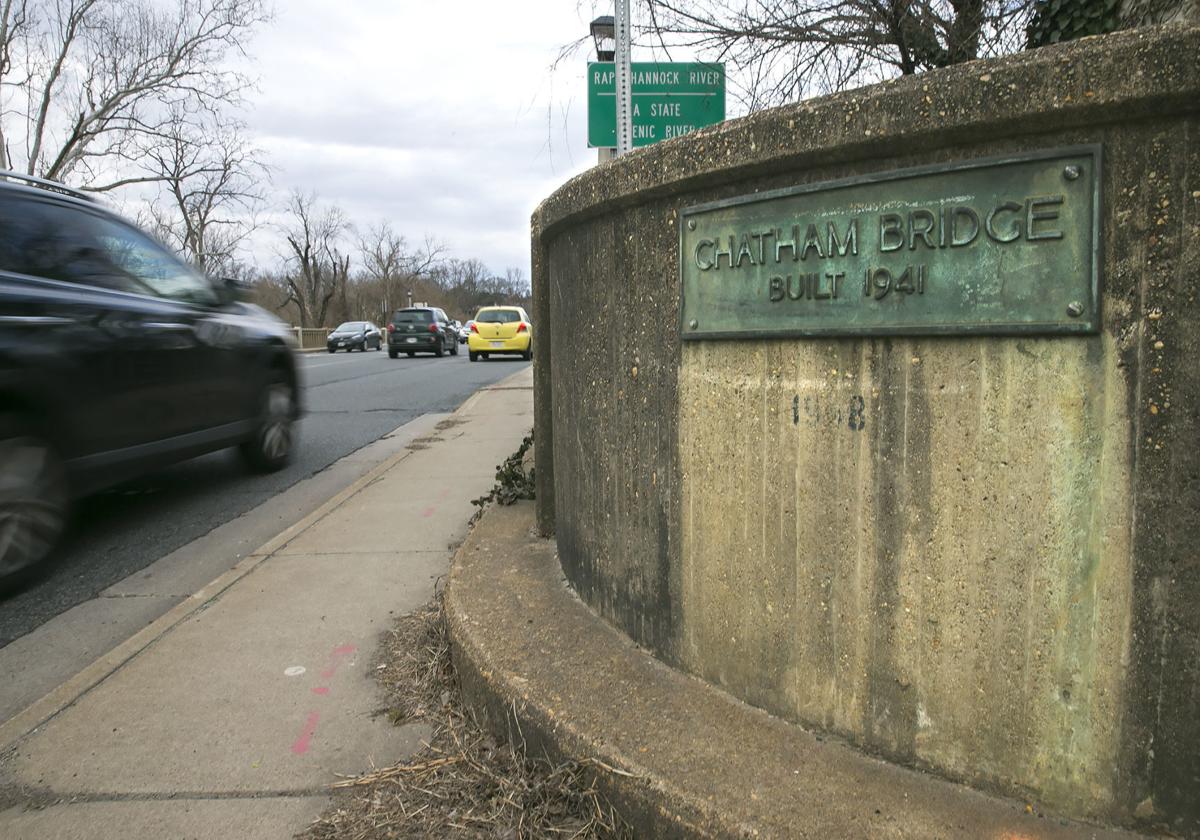 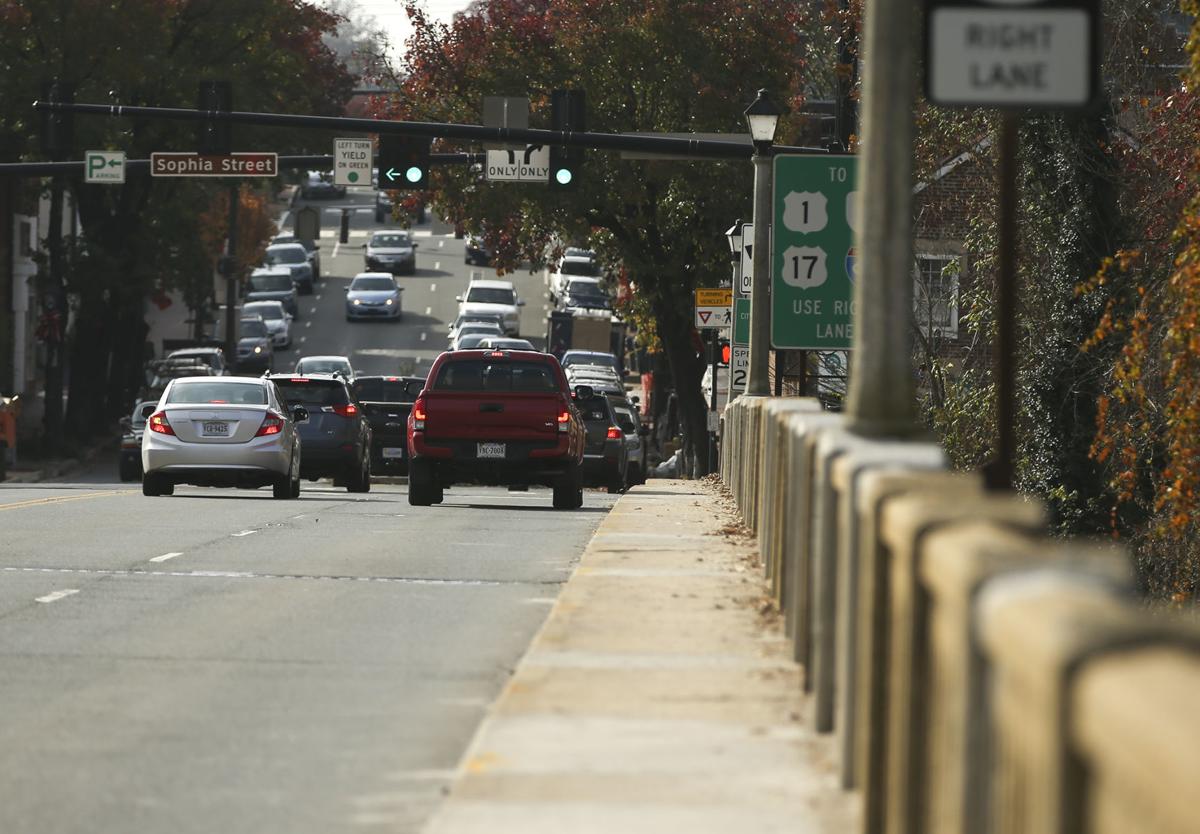 Traffic moves across the Chatham Bridge on Wednesday, Nov. 15, 2017. Repairs are planned for the pedestrian areas of the bridge. 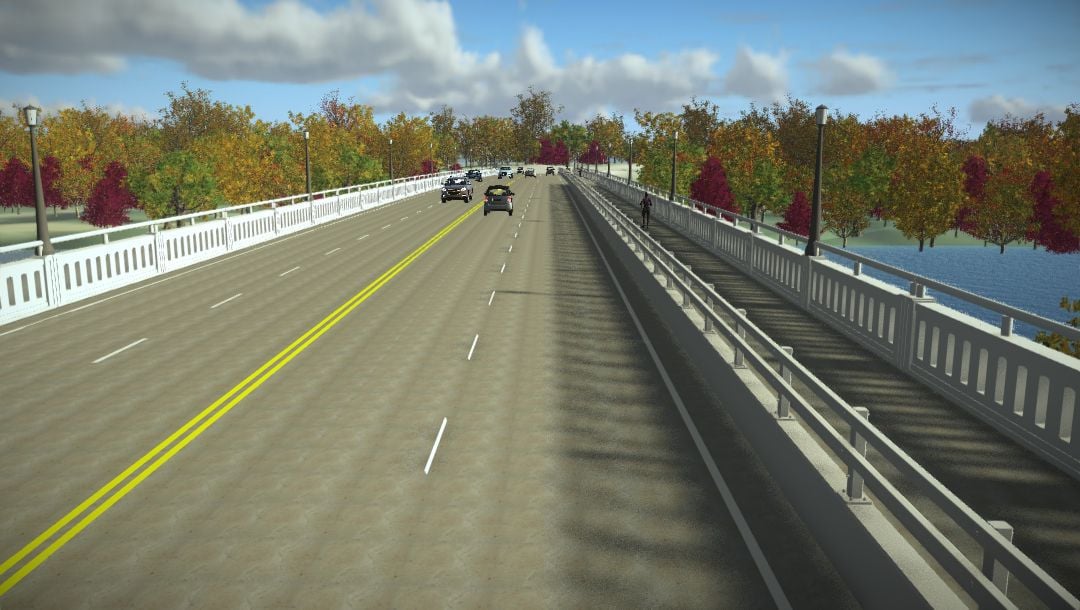 This rendering shows how the rehabbed bridge will look. 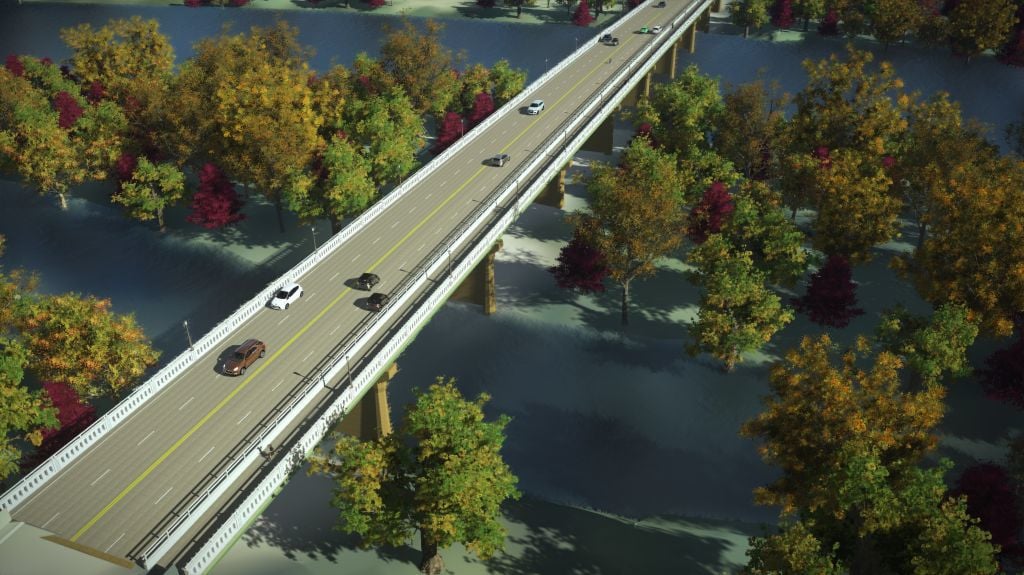 This rendering shows the pedestrian and bike lane. An overlook will be added.

Traffic moves across the Chatham Bridge on Wednesday, Nov. 15, 2017. Repairs are planned for the pedestrian areas of the bridge.

This rendering shows how the rehabbed bridge will look.

This rendering shows the pedestrian and bike lane. An overlook will be added.

Pedestrians who venture onto Chatham Bridge’s narrow sidewalks or bicyclists sharing its lanes with drivers usually watch out more for traffic than look at the Rappahannock River.

That will likely change once the bridge is remodeled and reopens next year with a dedicated, 8-foot-wide path on the downstream side for pedestrians and bicyclists. At its midpoint will be an overlook that will be 3 feet wide and 25 feet long.

The Virginia Department of Transportation added the overlook at the public’s request, Michelle Shropshire, VDOT’s assistant district administrator for project development, said in a presentation at the Fredericksburg Department of Economic Development and Tourism’s economic development breakfast Tuesday.

“It’s a way for people to gaze out over the river or the city,” she said.

Shropshire said VDOT expects to select a contractor for the Chatham Bridge’s $23.4 million makeover in April, and will then have a better timeline for work on the span’s superstructure. The nearly 80-year-old bridge, which VDOT has determined is structurally deficient, is expected to close no earlier than late May for the project. The work is expected to take 16 to 18 months, and VDOT is offering an incentive if it is completed early.

Plans call for widening the bridge from 50 feet to a little more than 57 feet—an additional 3 feet and 7 inches per side, removing the narrow sidewalks and adding the shared-use path for pedestrians and bicyclists. The existing sidewalks don’t meet Americans with Disabilities Act standards, and aren’t bicycle friendly. Currently, bicyclists are expected to share traffic lanes with vehicles.

The new path will be separated from vehicular traffic by a concrete wall topped with a metal railing. It will connect with the sidewalk next to the Old Stone Warehouse on the city side. On the Stafford County end, it will link to the Belmont–Ferry Farm Trail, which, when completed, will pass under the bridge.

Outer railings on either side of the bridge will be similar to the existing Gothic-style railings, and there will be street lights.

Nearly 16,000 vehicles use Chatham Bridge’s four lanes each day to cross the Rappahannock, according to a 2015 traffic count. VDOT designed a detour route and installed and bagged the signs in preparation for the bridge closure. It also completed the addition of a lane to the Dixon Street ramp to the Blue & Gray Parkway to help ease traffic flow using the detour.

Other traffic pattern changes that will go into effect temporarily once the bridge closes are:

The ramp signal will be temporary, but the city can decide to keep it once the bridge reopens, Shropshire said.

Verizon, meanwhile, began some of the preliminary utility work connected to the bridge project last November that has restricted traffic in the 100 block of George Street to one-way westbound between Sophia and Caroline streets. That work is expected to wrap up this week, she said.

VDOT is working with a number of online mapping providers such as Apple, Google, Tom Tom and Waze so drivers will have all changes in place when they go into effect. It is also providing updates in the Chatham Bridge project at VirginiaDOT.org/chathambridge, on Twitter at @VaDOT and @VaDOTFRED, and on Facebook at its Fredericksburg District group page.

Its website, FXBGBridge.com, includes a map of the detour route, an interactive map showing planned construction in the city, and a short video showing what the revamped Chatham Bridge will look like. A history of the bridge, which replaced an earlier bridge that was washed out in a 1937 flood, is being added as well.

The Road Scholar logo, which the city can use in other projects, features a stylized George Washington wearing a reflective orange vest and either an orange traffic cone or a helmet, depending on whether he’s driving, riding a bike, paddling a kayak or taking selfies.

City staff are looking at several places where people can view the bridge construction once it’s underway, Rose said. Cutouts of the Road Scholar will be located there so people can take selfies with him.

To see VDOT's video of what the Chatham Bridge will look like once the $23.4 million makeover is complete, visit: youtube.com/watch?v=VHojfOasmc8&feature=youtu.be.