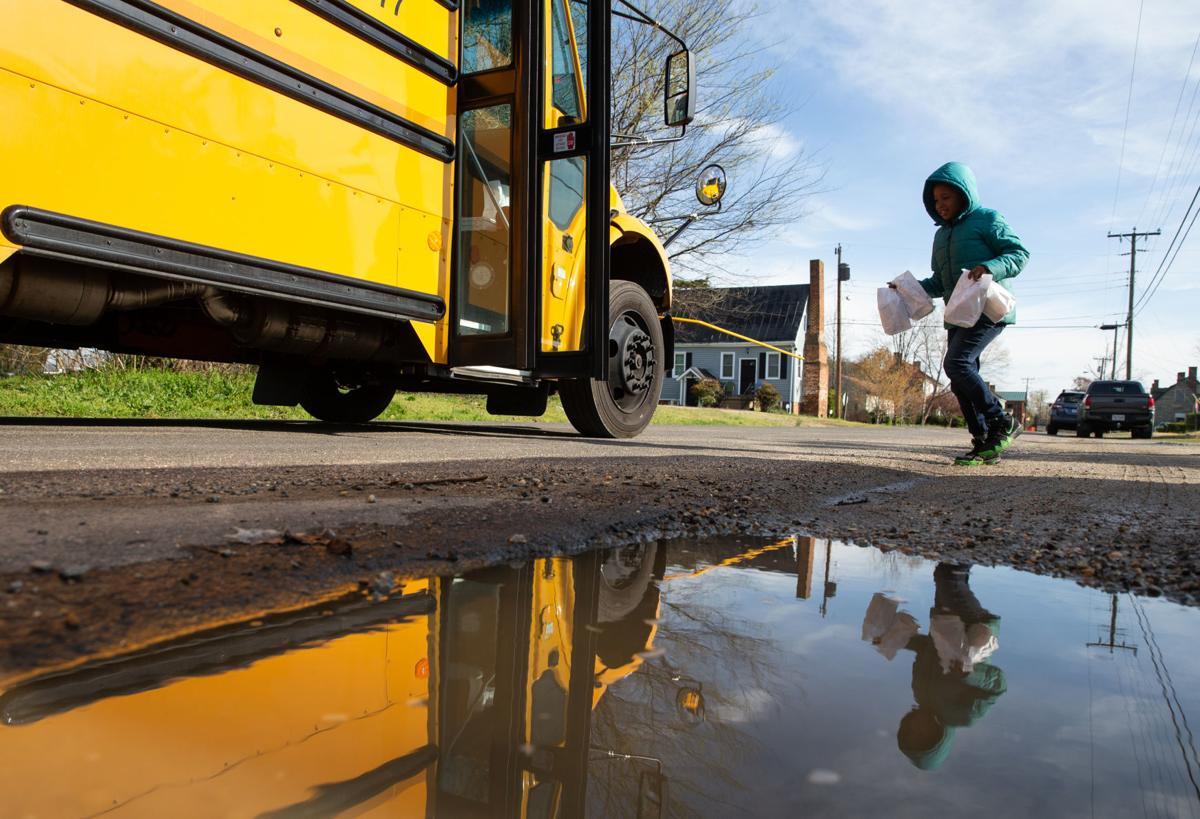 A child boards a Caroline school bus after picking up meals at Port Royal Town Hall on Tuesday. Bus driver Mario Ferguson picked up some students who had no other way to get to a lunch site. 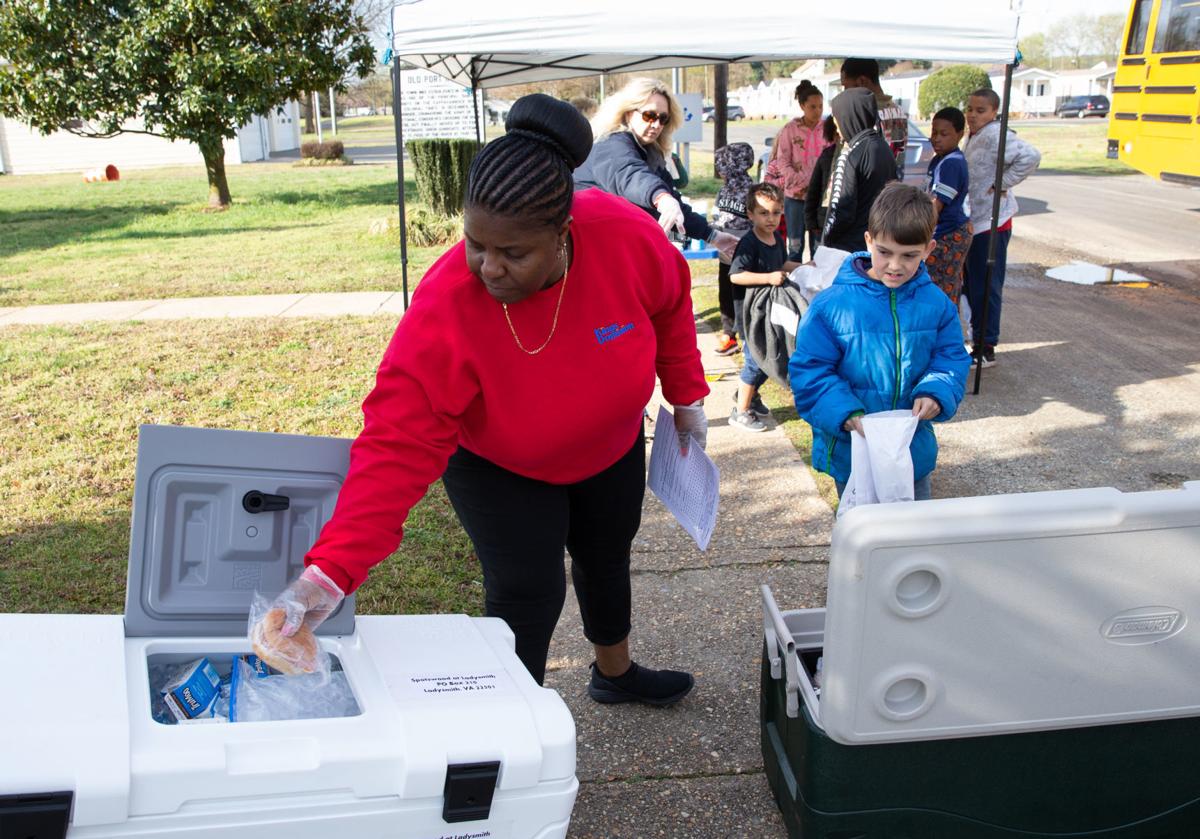 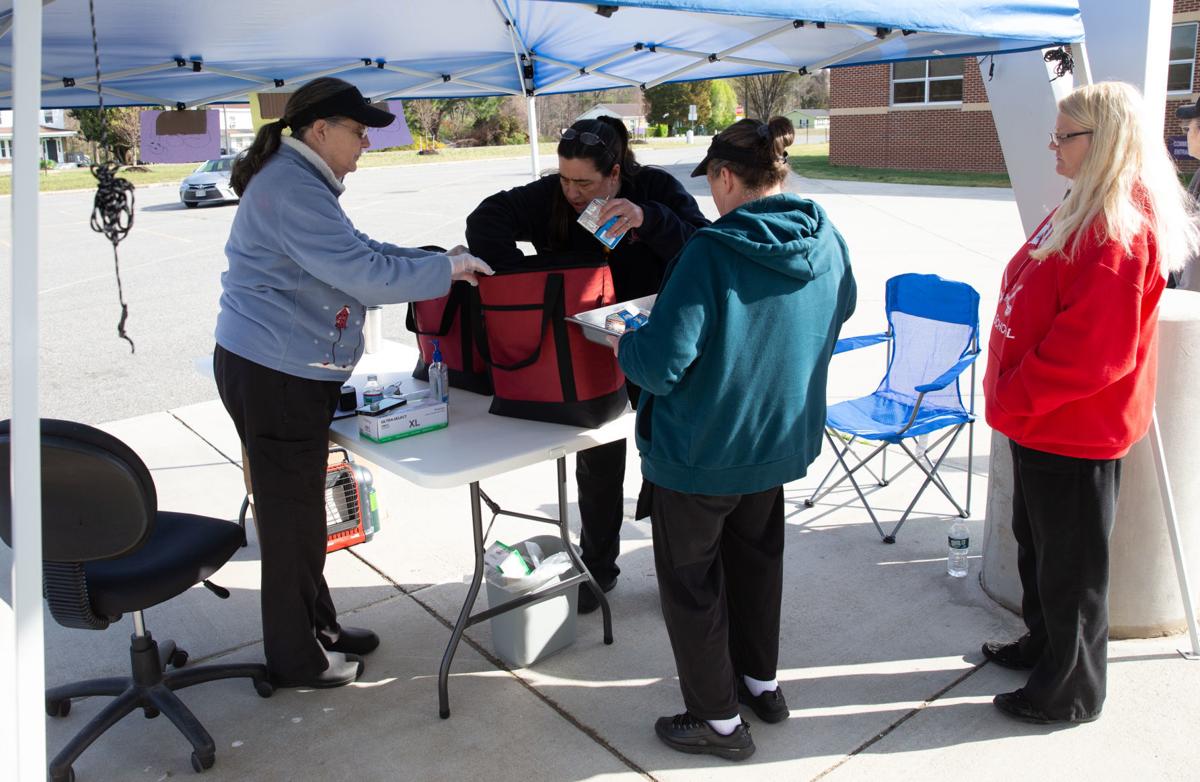 A child boards a Caroline school bus after picking up meals at Port Royal Town Hall on Tuesday. Bus driver Mario Ferguson picked up some students who had no other way to get to a lunch site.

Under the pavilion at the Heritage Park apartment complex in Fredericksburg, volunteers in fabric face masks handmade by a local church group laid out cold lunches of ham, turkey and sunbutter-and-jelly sandwiches, with yogurt and granola on the side.

Between 120 and 200 children were expected to pick up their lunch for the day at the site, said Ken Crampton, kitchen manager at Walker–Grant Middle School.

Crampton said it’s the busiest of the 18 mobile feeding sites set up by Fredericksburg City Public Schools to provide lunches to children since schools were closed for the rest of the year because of the coronavirus outbreak.

All school divisions have set up similar feeding programs to ensure those students whose families are food insecure can continue to eat.

“Those are my babies,” Frye said, tearing up as she described seeing one of her students that afternoon and not being able to give him a hug. “I think if I get out to see them, it will lift my spirits. If I get sick, I feel like I’ve done it to benefit the kids.”

Meals are handed out at 18 sites around the city, including Lafayette Upper Elementary School, Mayfield Community Center, several churches and WoodSpring Suites, which is where many city students classified as homeless live.

Caroline County served just over 4,400 meals in the first four days of its mobile feeding operation, which began March 17.

“Our biggest location has been Lewis and Clark Elementary School,” said Keith Conner, director of nutrition for Caroline County Public Schools. “On a couple of days there, we served over 200 children.”

From the Port Royal site, school bus drivers are picking up food and taking it out to children who live in rural areas of the county—as well as picking up children from a nearby trailer parks and bringing them to the site.

Bus driver Mario Ferguson said that when he learned schools would not reopen for the rest of the academic year, his first thought was for the children who live in these neighborhoods.

“I was really worried about the trailer parks around Port Royal, Bowling Green and Ladysmith,” he said. “Port Royal is the most distant part of the county where the parents cannot come reach us. So I worry about a few of the students. We’re making that our priority to reach them. I got phone numbers and I even deliver to them myself.”

In addition to the bus drivers, Caroline’s school resource officers are also running meals out to people in need, Conner said.

Bus driver Amy Ridge said she wanted to help out with the program because, “I have been on the other side of luck myself and know firsthand what it means to need that extra help.”

“This program is the most humbling way to serve our community in these times we are facing,” Ridge said. “The smiles, the tears, the sense of relief and thanks that you see on the faces of families fills your heart.”

She said handing out meals and talking with the families, while maintaining social distance, is something she looks forward to every day.

“It’s giving me a sense of purpose and routine,” she said.

Spotsylvania County Public Schools is providing free breakfast and lunch on Mondays, Wednesdays and Fridays at 18 county sites, as well as to several hotels where a large number of students live, division spokeswoman Rene Daniels said. Students are given double the amount of food on Mondays and Wednesdays so they have meals for the following days.

The division served 23,500 meals in the first four days.

“Our food distribution initiative has been a collaborative effort with Sodexo—our food services provider—division leadership, principals, school staff and social workers, and our cafeteria staff,” Daniels said. “Everyone is working together to ensure our students have access to food during this unprecedented health crisis.”

“Anyone 18 or under can come to one of the sites and grab a meal, no questions asked,” said Conner. “If a car pulls up with three kids in the vehicle, we’ll hand out three breakfasts and three lunches.”

These operations are bigger than summer meal distribution programs.

Conner said that although it follows the same guidelines, there really is “no comparison” between what’s happening now and Caroline’s summer feeding program.

“The summer feeding program is based out of the middle school where we run our academic programs,” he said. “Even though it’s open to the general public, as general rule we do not draw in too many outside people during the summer feeding. So it’s much smaller.”

Brian Kiernan, food services director for Fredericksburg schools, said the division is serving more meals a day now than it does during the summer, “due to our much larger ‘footprint’ for this emergency program.”

It’s not clear how long school divisions will be able to run the meal service programs.

“The issue we’re dealing with is we’re not bringing in any revenue at the moment to support the food service programs,” Conner said.

Public school food service programs are operated under the umbrella of the U.S. Department of Agriculture and are separate from the school division’s operating budget.

Food service programs bring in revenue to offset their costs when students pay for lunches, and through reimbursement from the federal government for meals served.

“So our budget depends on the number of meals we serve,” Conner said. “We would normally serve 4,000 meals a day during the year. If we’re only serving 1,100 meals, it’s a huge impact on our budget line. The current estimate is we’re covering 40 percent of our cost.”

Conner said that either the federal government will need to step in to provide more funding or the local school divisions will need to divert funds from academic purposes to support the food service program.

“Or if we tried to shrink the program down to meet the funds, then we’re not going to be serving enough people,” he said.

Another question is whether enough staff will be on hand to continue mobile feeding programs, as many food service staff members are only contracted through the end of the academic year.

“So you’re going to have to locate and then pay additional staff, which will put additional financial burdens on the program,” Conner said. “Oh my gosh, I hope we don’t get there.”

Kiernan also acknowledged that the situation is unprecedented.

“This is a new challenge, but we do have a tremendous staff that is dedicated to the children of Fredericksburg,” he said. “I began the summer feeding program in 2014 with the intention of that program being sustainable, as I have never been a big fan of ‘One Hit Wonders.’

“Although it is early, I don’t plan on ending this any day soon,” he added.