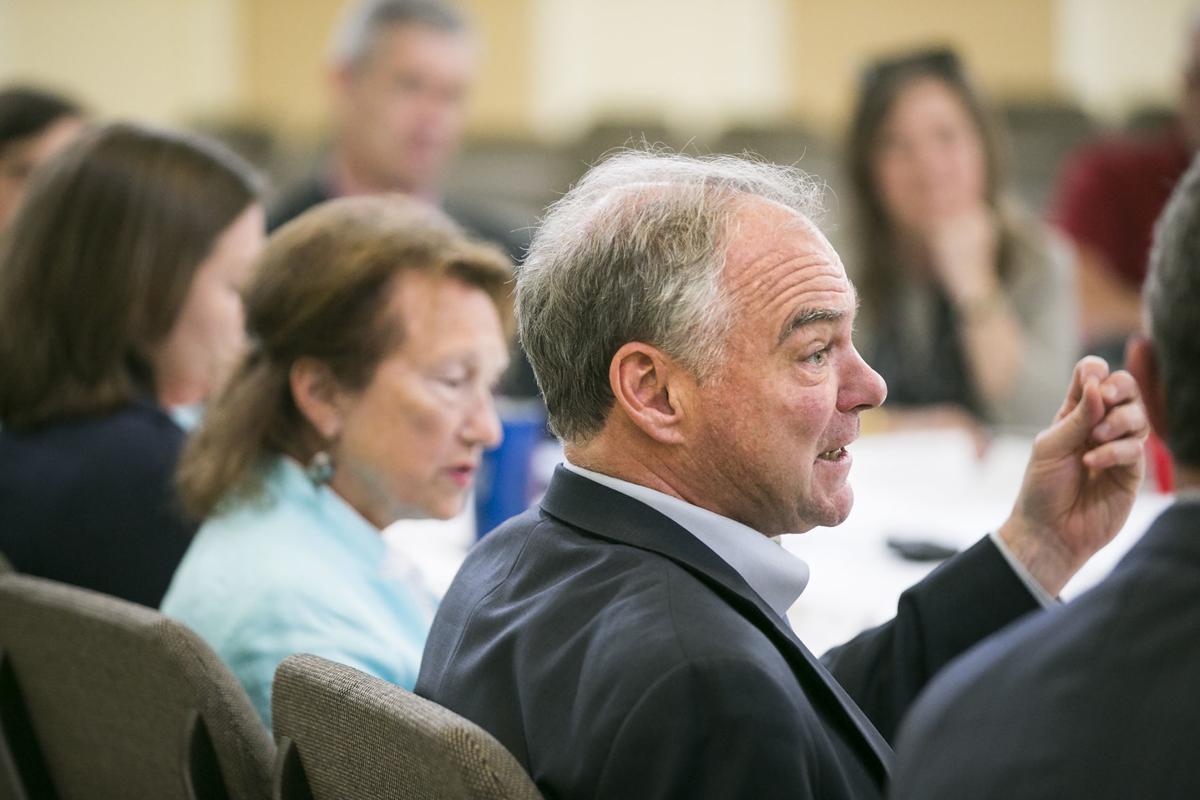 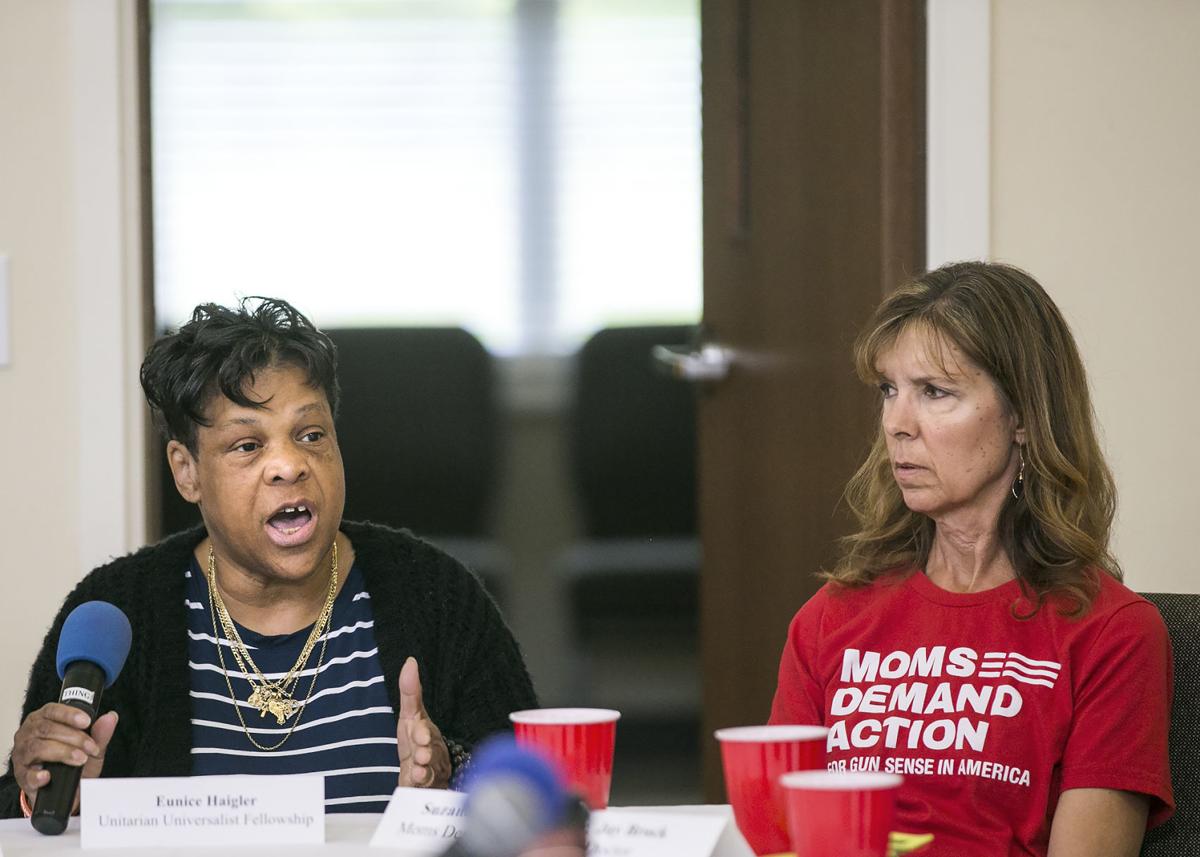 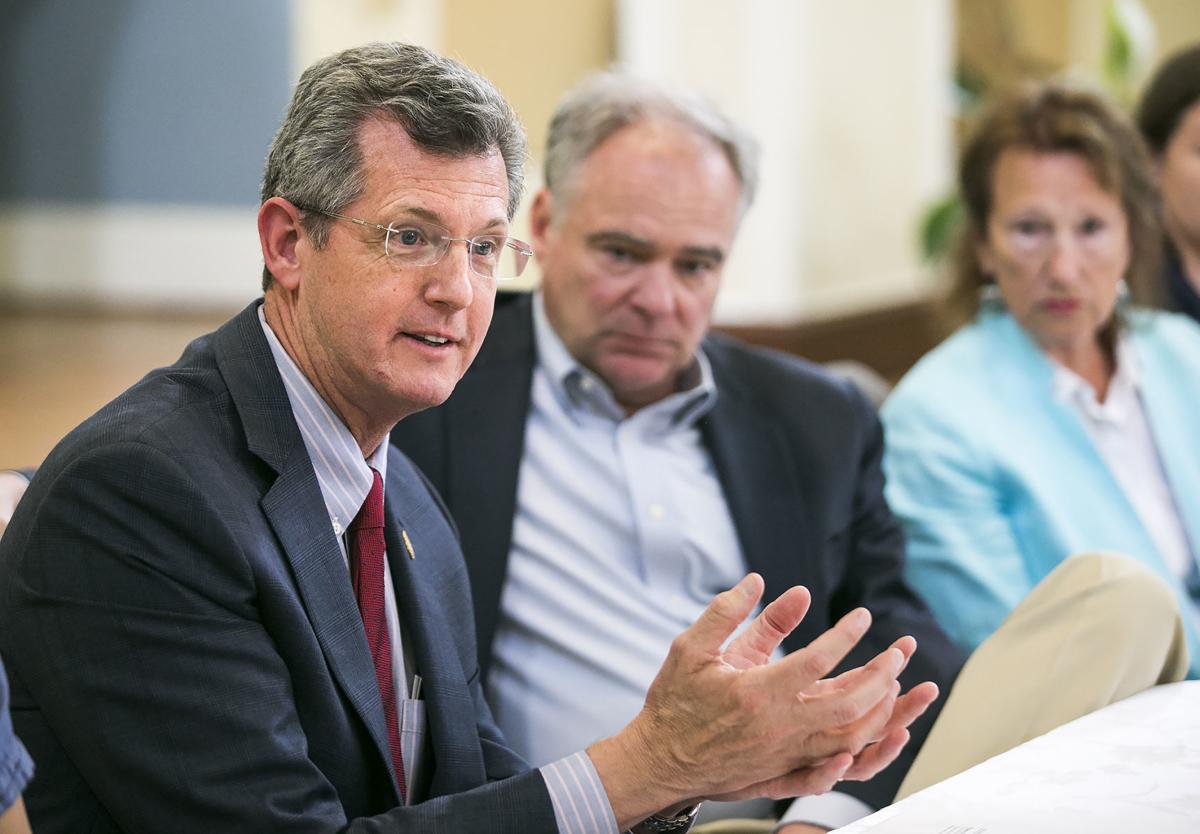 Virginia Health and Human Resources Secretary Daniel Carey joins Sen. Tim Kaine and others at the roundtable at the Unitarian church.

Virginia Health and Human Resources Secretary Daniel Carey joins Sen. Tim Kaine and others at the roundtable at the Unitarian church.

The meeting, held at Falmouth’s Unitarian Universalist Fellowship Church, followed a similar session held by Kaine earlier in the day in Richmond. It drew a small crowd that included some who questioned the need for new laws.

The sessions came 17 days after a gunman killed 12 people in the municipal building in Virginia Beach and three weeks before the start of a special session of the Virginia General Assembly called by Gov. Ralph Northam to address gun violence in the commonwealth.

“The conversations have to happen so that people can start thinking about what do they support, what they don’t, and letting their legislators know,” said Kaine. “But I’m also here to get ideas because I’m ultimately not casting a vote in the General Assembly on July 9, but I may be casting votes in Congress, and I’m trying to get things unstuck that have been stuck for a long time and the ideas that people express here can help me get some ideas unstuck, or maybe give me a new idea that I didn’t have.”

Kaine is sponsoring a bill that limits a magazine’s capacity to 10 rounds and favors the Senate taking up House-passed legislation that requires universal background checks and closes what is called the “Charleston Loophole.” The latter bill would eliminate a provision that gives licensed gun dealers the option of selling a weapon to a buyer if the required federal background check is not completed within three days.

That provision allowed Dylann Roof to purchase a gun that he used to kill nine church members on June 17, 2015, at the Emanuel African Methodist Episcopal Church in Charleston, S.C.

Kaine reminded those gathered Monday that he was governor when a gunman killed 32 people at Virginia Tech in 2007 and that he was mayor of Richmond when that city had the second highest homicide rate in the United States.

Kate Stafford, a member of Mom’s Demand Action, said her group is all about trying to pass sensible gun laws. She said her group also supports the Second Amendment, but favors such things as the “Red Flag Law,” that allows law enforcement or family members to ask a court for permission to remove firearms from individuals who may present a danger to themselves or to others.

“Any time the politicians are willing to listen, that’s a good thing,” Stafford said.

Jim Price of King George County attended the session and said he was skeptical of the senator’s intentions.

“I’m afraid that he’s leaning a little bit anti-gun and I’m concerned about some of these freedoms,” Price said.

Price said he comes from a long line of hunters and gun owners. Both his father and brother owned gun shops and Price said he has spent thousands of hours and dollars building firearms as heirlooms for his children and his grandchildren.

“I want to see those freedoms preserved that our Virginia forefathers sacrificed their lives, their fortunes and their sacred honors for,” said Price. “I assume with Gov. Northam calling a special session on July 9, that there must be some leanings, or some backdoor deals that have already been made.”

Northam’s proposals include requiring universal background checks, banning assault weapons, silencers and bump stocks, requiring people to report lost and stolen firearms and reinstating a law that allowed the purchase of only one gun a month. He said he also wants to expand local authority to regulate firearms, including in government buildings.

Kaine said he had never voted for a proposal that would take someone’s gun away.

“Nor is there a single proposal that Gov. Northam has put on the table for July 9 that’s taking people’s guns away,” Kaine said. “It’s just about trying to keep us safe.”

Douglas Franklin Benson of Stafford came to the roundtable to make his feelings known about where he stands on gun control. He also feels politicians sometimes take advantage of tragedies to further an agenda without having considered all sources of information or data.

“I think our First Amendment is in danger because there are not enough people that are willing to go out and discuss both sides of the issue, they want to keep it one-sided and biased, of course,” said Benson. “I think they are probably missing all of the important facts related to these shootings, there’s a lot of statistics that will counter every argument they have about gun crime.”

Kaine reiterated that dialogue and meeting with community members is key to developing reasonable policies to keep people safe in the workplace, in schools and elsewhere.

“I know people want to say that because they want to scare people away from just having a discussion, but when you get into the discussion, what you find is overwhelmingly Virginians support things like background checks and some of the other common-sense rules,” Kaine said.