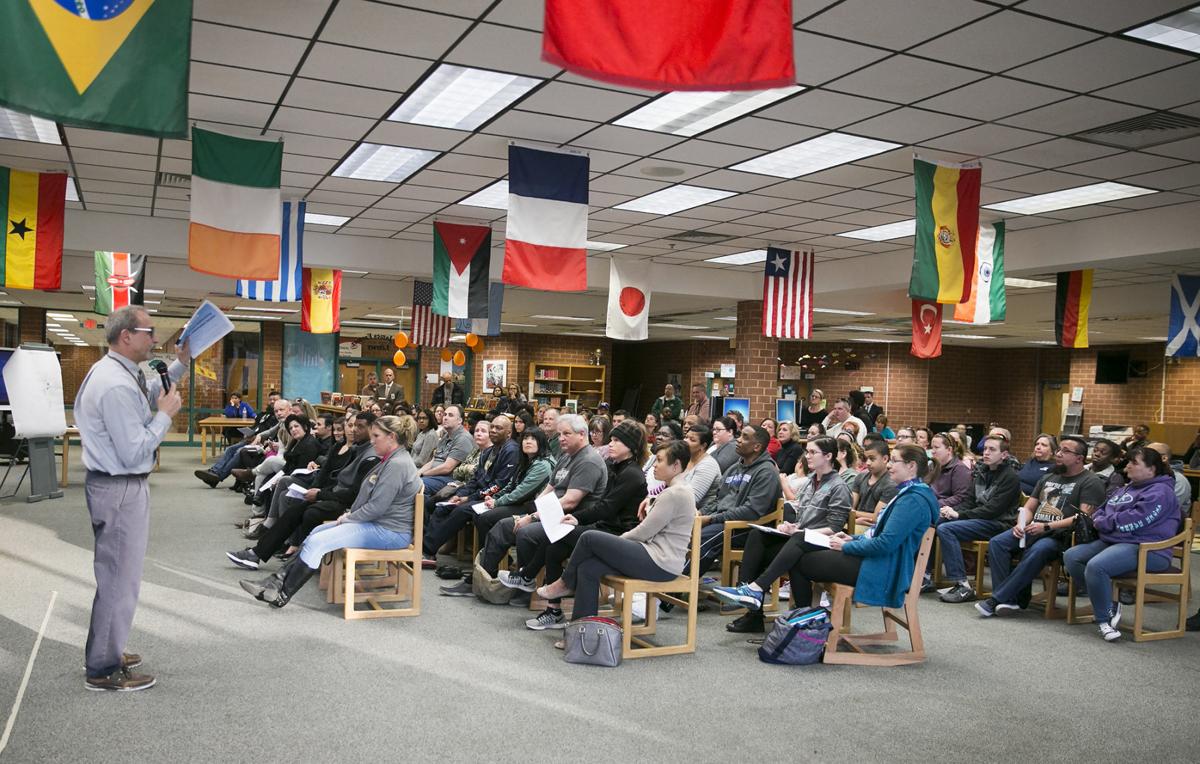 A crowd attending an informational meeting on redistricting listens to Spotsylvania County Schools Executive of Operations Don Upperco answer questions from the audience at Massaponax High School on Tuesday, March 19, 2019.

A crowd attending an informational meeting on redistricting listens to Spotsylvania County Schools Executive of Operations Don Upperco answer questions from the audience at Massaponax High School on Tuesday, March 19, 2019.

Spotsylvania County parents questioned school division officials for about two hours this week at the third of four information sessions on redistricting plans that could affect four of the county’s five high schools.

Tuesday night’s session was held at Massaponax High School, which is the school most affected by the proposed changes.

“I know redistricting is kind of like choosing between the electric chair and the gas chamber,” said Don Upperco, executive director of operations for Spotsylvania schools, acknowledging the many concerns of parents and students.

The two plans under consideration were developed by a redistricting committee made up of principals, school administrators and parents over the course of two meetings earlier this winter.

They are designed to provide relief from longtime overcrowding at Massaponax High School, where this year 2,017 students are enrolled in a building with capacity of 1,830—though Upperco said that not all students enrolled at Massaponax are physically present in the building all day, since many travel to other high schools for specialty programs.

The neighborhoods suggested for redistricting were previously identified as “study areas” by Mosely Architects in a building utilization study the firm conducted for the school division.

Students from Plantation Forest and Stoneybrooke neighborhoods would go from Courtland to Spotsylvania High School.

These changes are expected to be implemented in the 2019–20 school year, Upperco said.

According to the division’s transfer policy, rising seniors can stay at their current school, but they or their parents must provide transportation.

About 30 people had questions for the administrators, including parents and Massaponax students.

Concerns were over whether students transferring from Massaponax would have the same educational, athletic and extracurricular opportunities at Courtland.

Two parents of Massaponax lacrosse players said their kids are already being approached by college recruiters for the sport and switching to Courtland—which does not have a lacrosse team—would jeopardize these opportunities.

Several students said the AP classes they plan to take at Massaponax aren’t offered at Courtland.

In response to these worries, Upperco said it was his understanding that “the resources will follow the students.”

Parents said their children have already been asked to invest in Massaponax school culture.

“This is like asking a Redskins fan to become a Dallas fan,” one mother said.

Several parents of rising seniors said they would not be able to provide transportation to their children to stay at Massaponax.

Others expressed frustration with the speed of development in Spotsylvania, worrying that another redistricting effort would be necessary in just a few years.

“I recommend to my neighbors that you get to your [representatives] on the Board of Supervisors,” a mother said. “They did this to us and now we are being reactionary. Let’s make sure we get these communities built with all the amenities they need so we’re not back here in five years.”

Upperco said supervisors are unlikely to approve the funding for a new high school as long as enrollment at the existing high schools is so uneven, with Massaponax and Riverbend high schools over or approaching capacity and Spotsylvania and Chancellor several hundred students below capacity.

“That is the elephant in the room,” he said.

Parents said they understand redistricting is necessary but they think it’s being rushed.

“Why does it have to happen this year? We don’t have time. There are too many unknowns,” said the mother of a current junior at Massaponax.

Upperco and the other administrators attempted to answer what questions they could.

“You’re getting a lot of ‘I’m not sure,’ and that’s because I’m an honest person,” Upperco said.

Wolfe said he was keeping note of all the questions and assured attendees that every one would eventually be answered.

The Spotsylvania School Board will hold a public hearing on the redistricting plans on April 1 at 6 p.m.