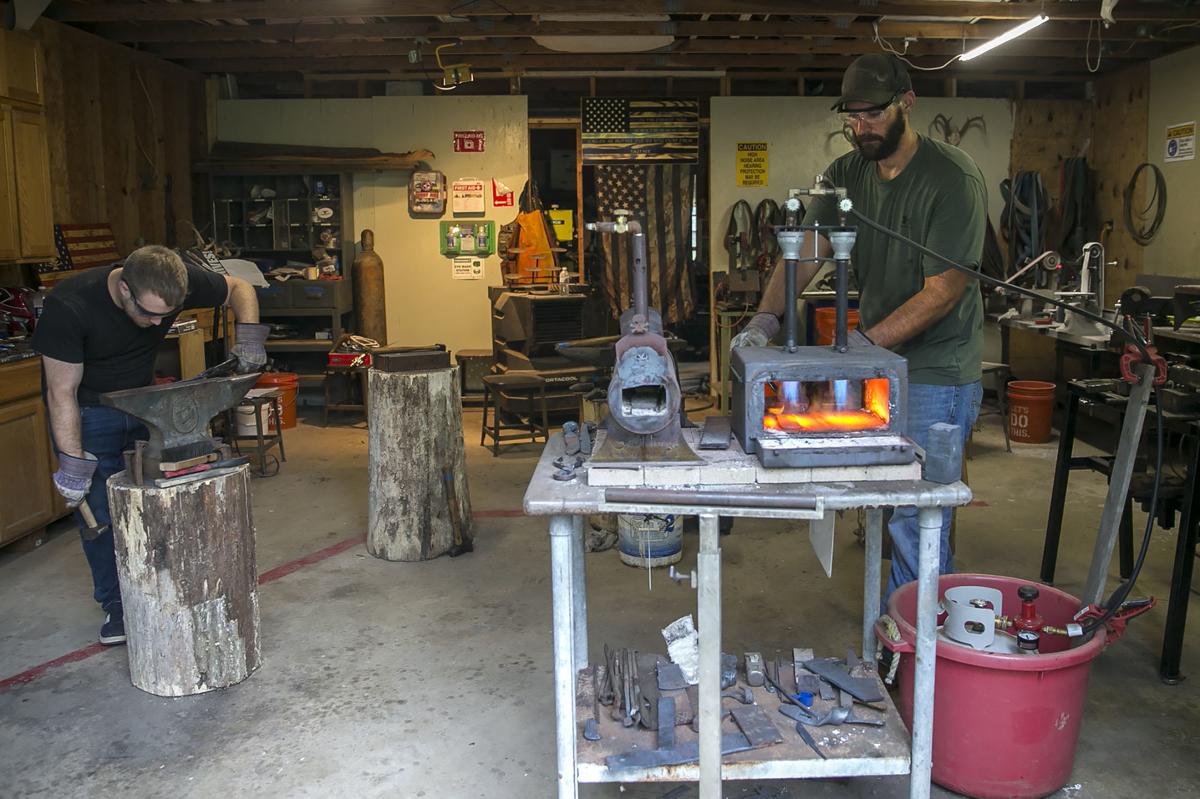 Clifton Hughes (left) and Justin Jennings work on their projects at Black Horse Forge in Stafford County on Wednesday, Sept. 4, 2019 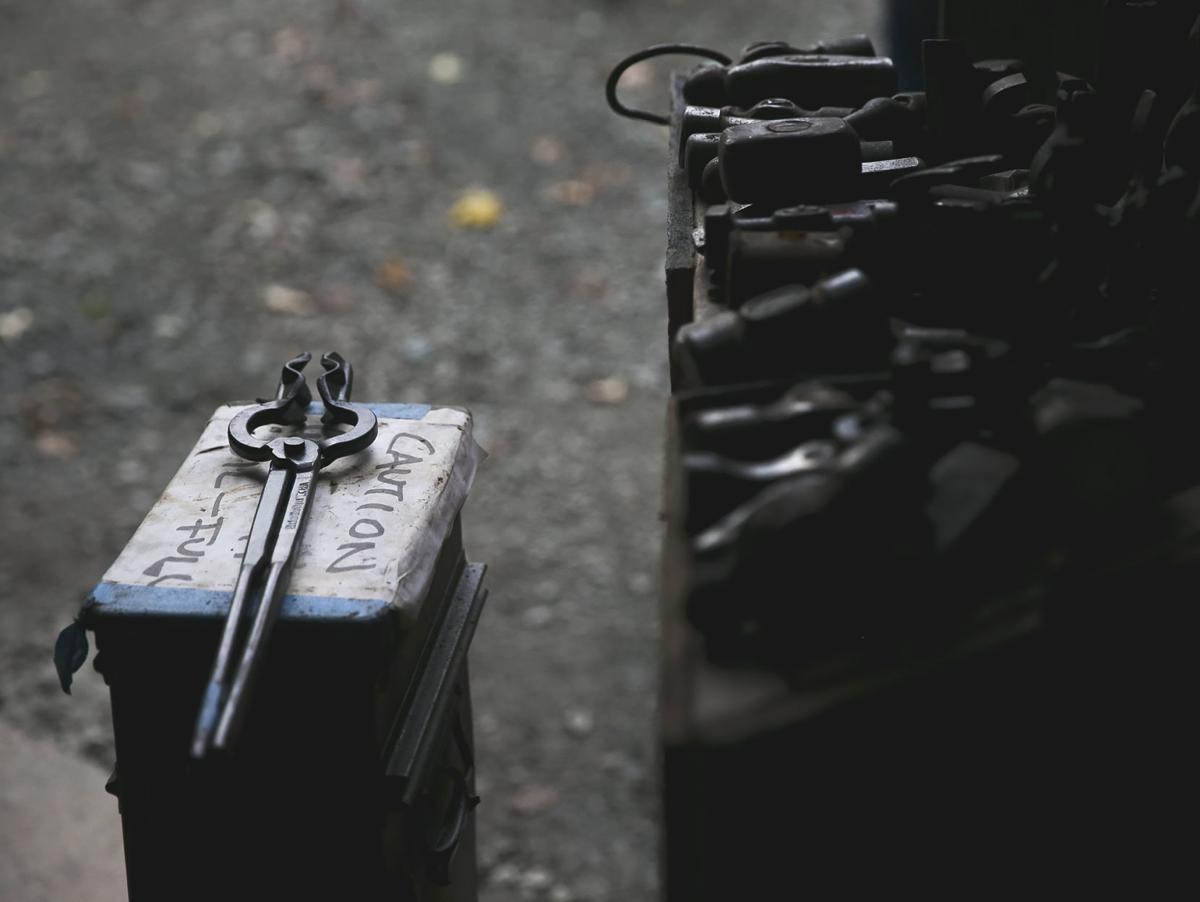 A vast array of tools are available for veterans interested in blacksmithing at Black Horse Forge. 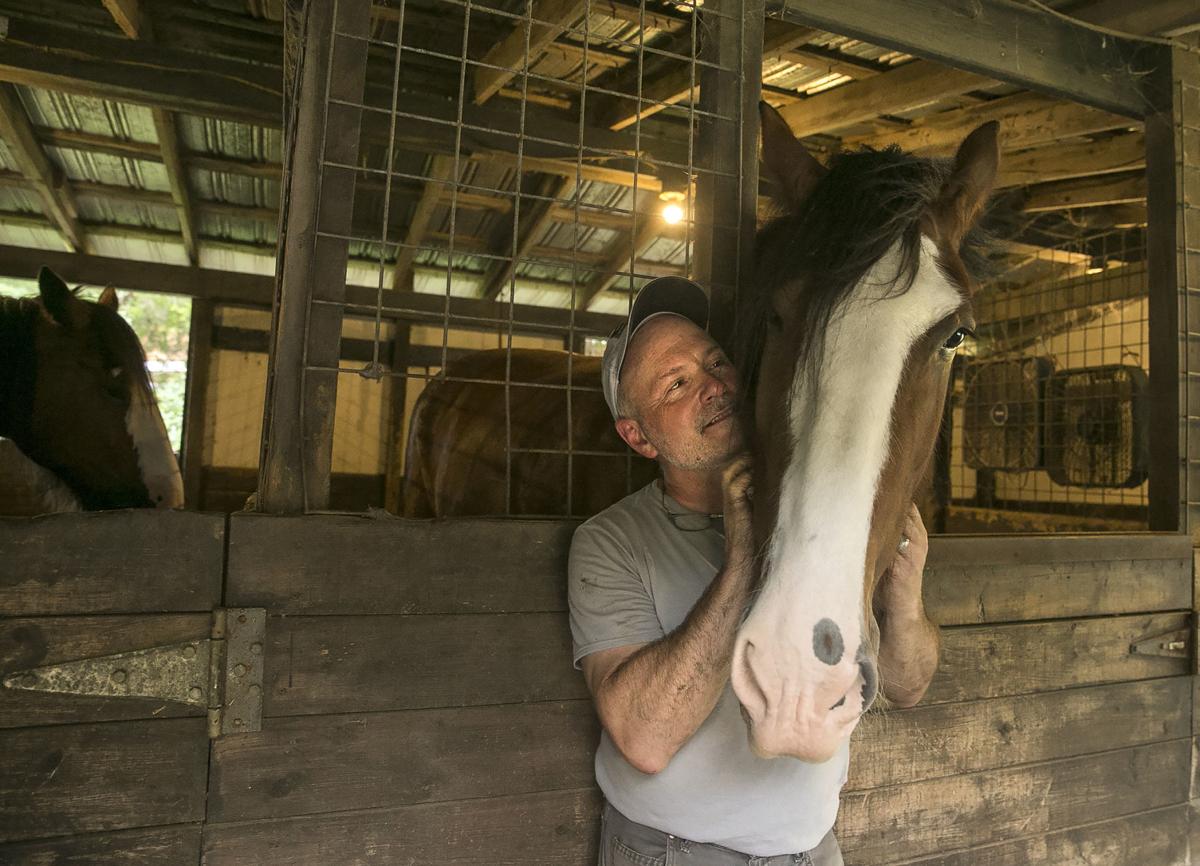 David Seitz spends time with Gabe, one of three draft horses housed at Spearhead Stables, on the site of Black Horse Forge in Stafford County on Wednesday, Sept. 4, 2019. Veterans can learn draft horse handling as well as blacksmithing at the facility. 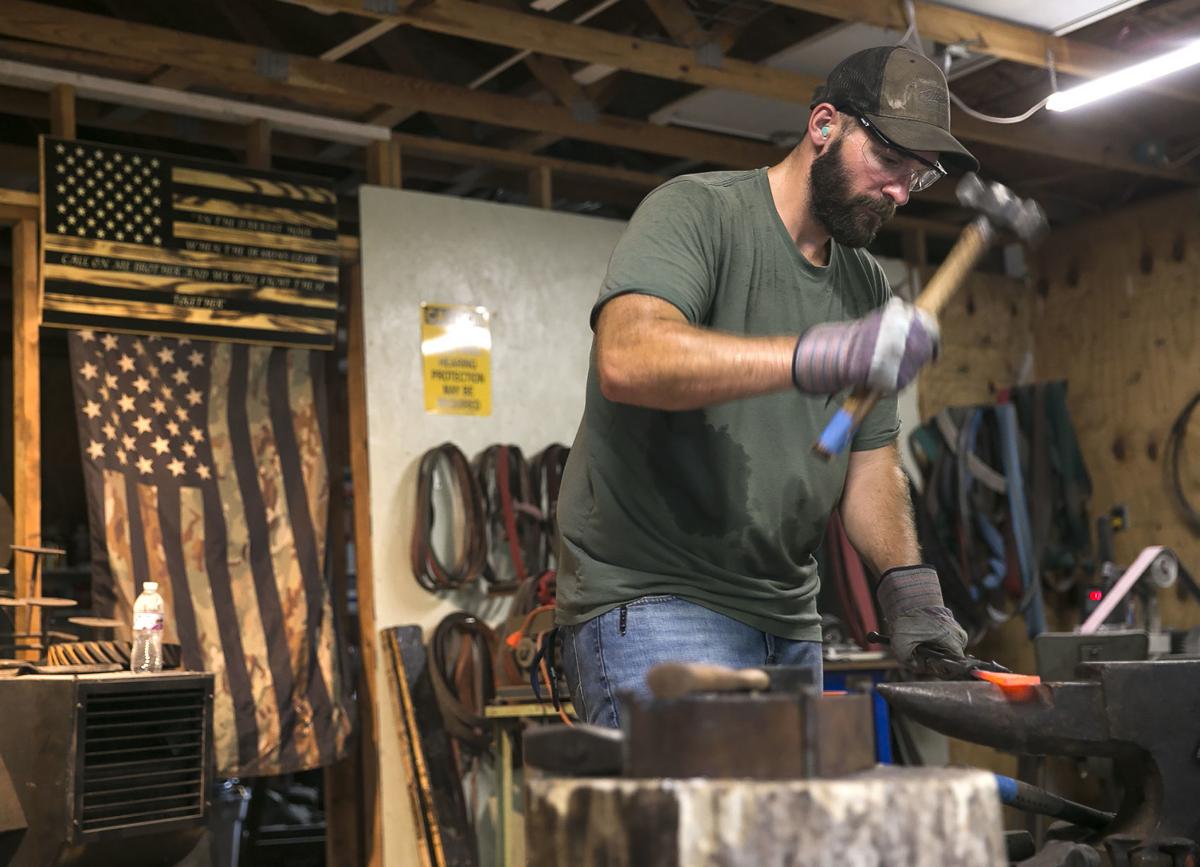 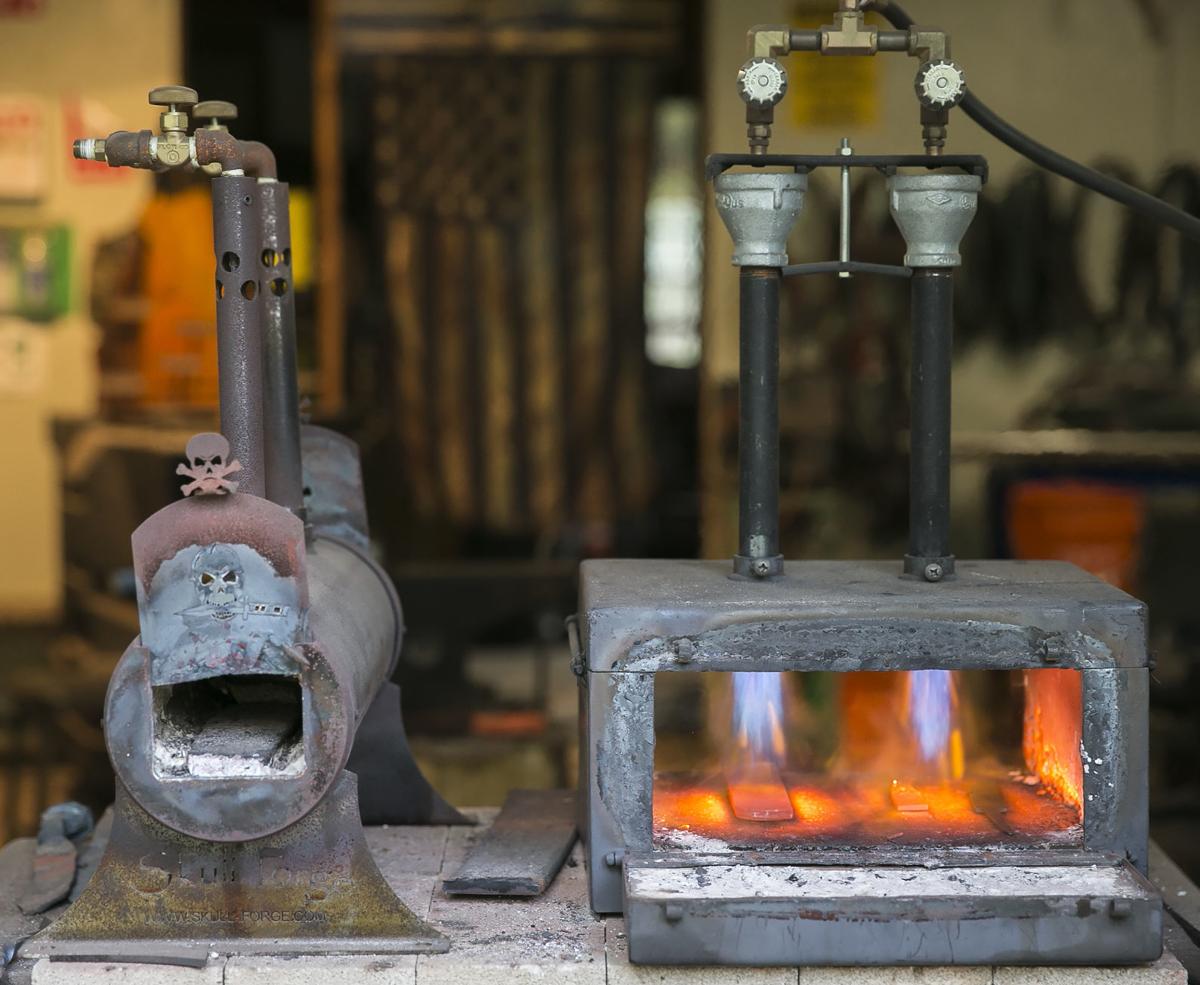 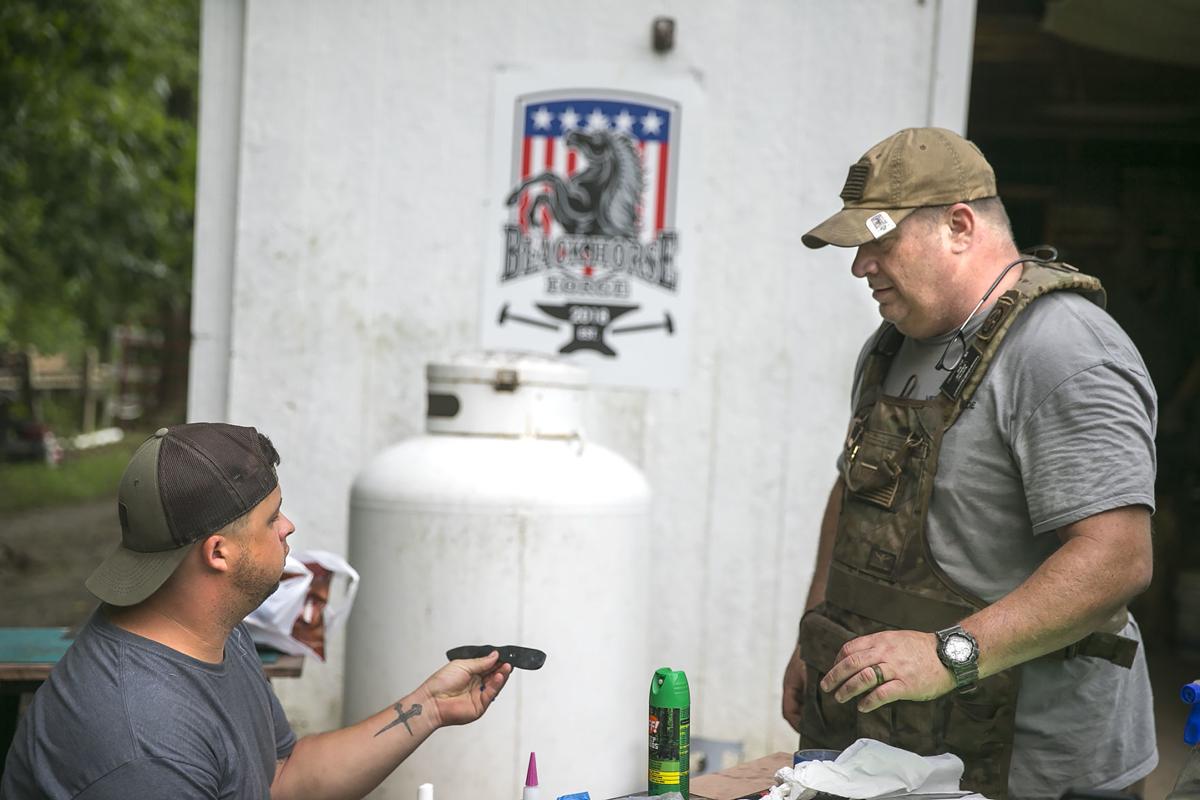 Steve Hotz (right), who founded the blacksmith program for fellow veterans after the work helped calm him, chats with Greyson Carter Harrelson.

Clifton Hughes (left) and Justin Jennings work on their projects at Black Horse Forge in Stafford County on Wednesday, Sept. 4, 2019

A vast array of tools are available for veterans interested in blacksmithing at Black Horse Forge.

David Seitz spends time with Gabe, one of three draft horses housed at Spearhead Stables, on the site of Black Horse Forge in Stafford County on Wednesday, Sept. 4, 2019. Veterans can learn draft horse handling as well as blacksmithing at the facility.

Steve Hotz (right), who founded the blacksmith program for fellow veterans after the work helped calm him, chats with Greyson Carter Harrelson.

Producing those items seems to have positive therapeutic results.

“We’ve had people come here who are on the edge of things,” said Hotz. “We want them to come here before they do something irrational. This is a safe place.”

Since its beginning 18 months ago, the forge has offered veterans and first responders a peaceful, secluded venue to work as a team, share stories, relieve stress and create beautiful art.

“Once you get focused on a piece of metal and start banging on it, things don’t bother you anymore,” said Army veteran Michael Garcia. “I stop thinking about a lot of things when I start hammering.”

“For me, it’s a combination of getting to hit something with a hammer as hard as you can, but there’s also that creative relief as well,” said Clifton Hughes of Woodbridge, a former Virginia State Police officer.

Hotz, who is an environmental sign specialist, served as a paratrooper with the U.S. Army’s 82nd Airborne Division. After 18 years of service, he was diagnosed with PTSD, which led him to seek out remedies to help ease his condition. Hotz finally found serenity through a clinic in Alexandria that offered veterans blacksmithing as a form of stress relief.

“The first night he went to that program and came home, I could see a difference,” said his wife Amy. “He was happy. This gave him another mission, something to do, something positive to focus on.”

According to Hotz, the Veteran’s Administration recognizes blacksmithing—along with other fine arts such as painting and sculpting—as an approved form of therapy.

Hotz continued in the program, making cast iron knives every Wednesday evening. He took such an interest in blacksmithing that he soon began accumulating the countless tools of the trade through internet searches and online deals.

Over the course of a year, Hotz had purchased so much gear—gloves, leather aprons, tongs and hammers—that the stockpile nearly filled the couple’s one-car garage.

One day during breakfast with friends, Hotz was introduced to retired Army Lt. Col. Dave Seitz, who owns the farm that hosts the forge in North Stafford. The two Army veterans immediately hit it off.

During the breakfast meeting, Seitz was intrigued to hear about the blacksmith therapy sessions that Hotz was involved with, and was also impressed that Hotz had accumulated so many blacksmithing tools and had developed a deep love for the hobby.

Seitz offered Hotz full access to the large outbuilding at his Stafford farm, located on Whispering Pines Lane. There, Hotz could set up shop to use his tools and his talents to provide the therapeutic blacksmithing classes to others trying to overcome PTSD and other hardships related to military and public safety service.

In November 2018, Hotz and his wife moved into the outbuilding and Hotz soon set up and forged his first knife and tomahawk. The couple began doing test runs for a program to teach others.

Through word of mouth and social media, the first group of blacksmith hopefuls soon arrived. Since the barn doors of the forge first opened, more than 200 veterans and first responders have passed through. Many still spend time there.

Edward Heilborn, who served as an artilleryman in the Marines for 10 years and has numerous overseas deployments under his belt, returns to the forge on a regular basis for the camaraderie and the atmosphere.

“There are veterans here who I can talk to, with the same type of humor,” Heilborn said. “I can joke with them and have fun. It feels good. We’re all helping each other out.”

“This is a great place to come and release some of the frustrations I’ve got,” said Greyson Carter Harrelson, who has been serving in the Navy for the last 10 years. “I’ve met friends here who have my back.”

Several of the forge’s frequent guests have become skilled blacksmiths at the site, providing assistance and training for newcomers.

“This can also be a catalyst for a person who wants to make this their own trade,” said Hotz. “We’re doing a trade that’s a lost art, but it’s making a comeback.”

After taking a basic class, students can return to the forge every Wednesday for “open forge night,” which allows participants time to work on their own project freely, at their own pace.

Visitors to the forge can also learn to work with horses. Two Clydesdales reside on the farm, as well as 20–year–old Gordy, a draft horse who served at Arlington National Cemetery with the 3rd Infantry Division and helped pull the funeral caisson carrying the casket of President Ronald Reagan in 2004.

Those working at the forge may be accompanied by their loved ones, including their children, their pets or their friends, referred to as “battle buddies.”

“Those guys are just as important as the support that we have,” said Hotz. “A lot of vets won’t come without their support buddies.”

Those who need to visit the forge to work off stress are welcome at any time, around the clock.

Hotz said he has received telephone calls in the middle of the night from service members seeking access to the forge and has accommodated each and every one of them.

“My goal is to provide total support, no matter what,” Hotz said.

The biggest expenses at the forge are propane, sanding belts and glue, which are purchased on a recurring basis by the four staff members. Veterans and first responders pay nothing to work at the forge.

The team is developing a marketing plan that will help determine the best way to sell some of the products made at the forge.

Future plans for the enterprise include obtaining more equipment and expanding craft options to include leatherworking, glass blowing and woodworking shops.