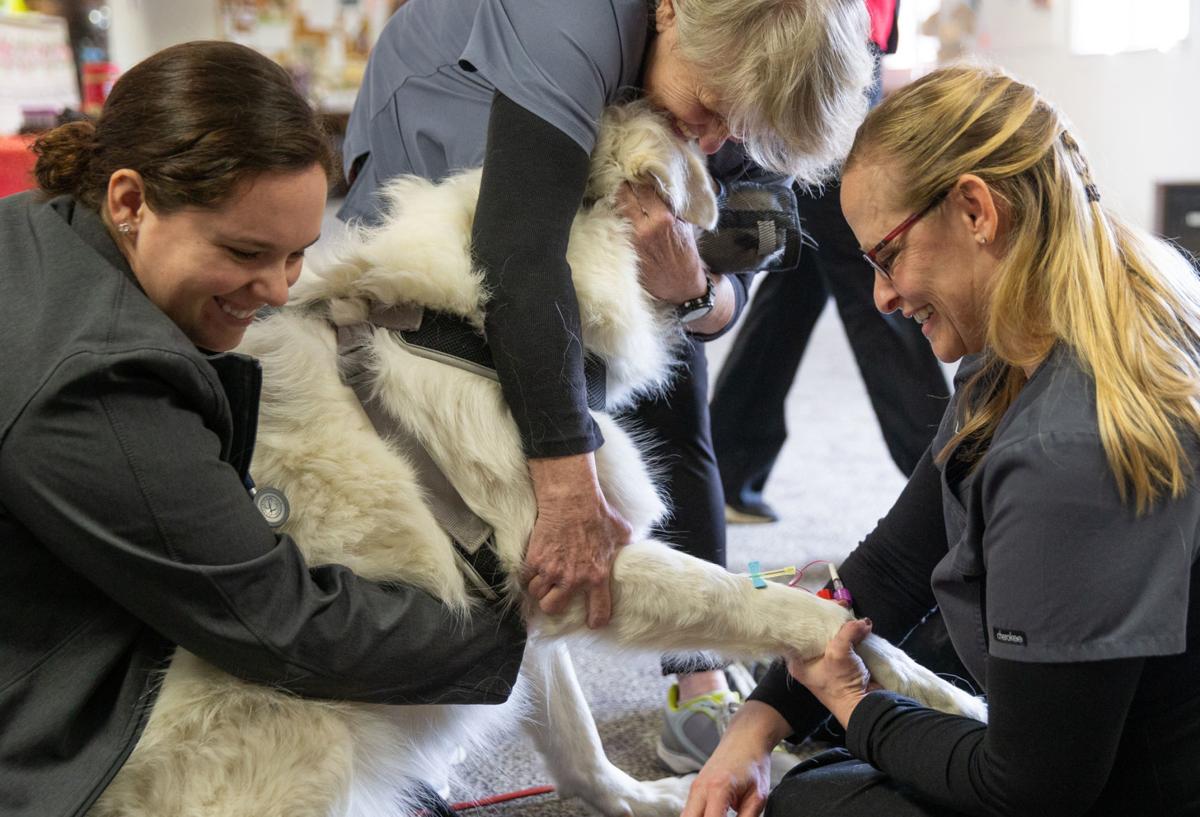 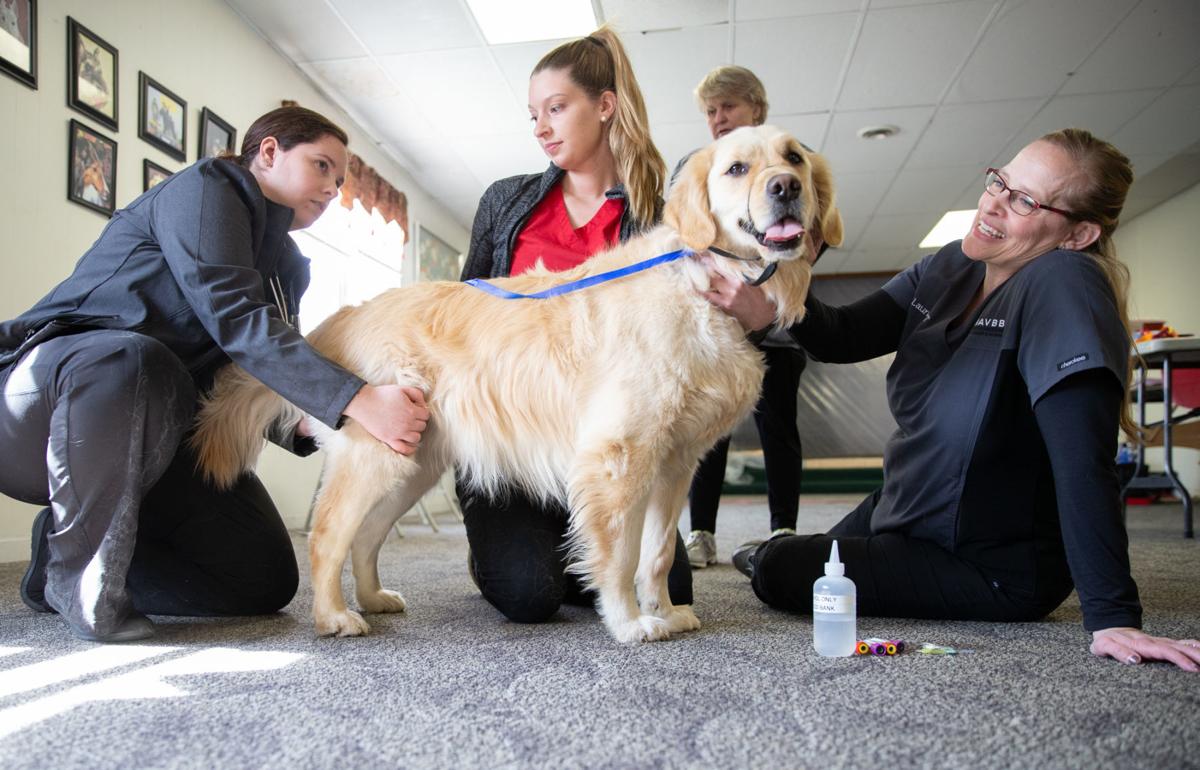 Casey Mills (center) and Laura Call (right) hold Storm while Dr. Rebecca Scherrer conducts a physical during a canine blood drive. Storm was one of 10 dogs who donated during the event. 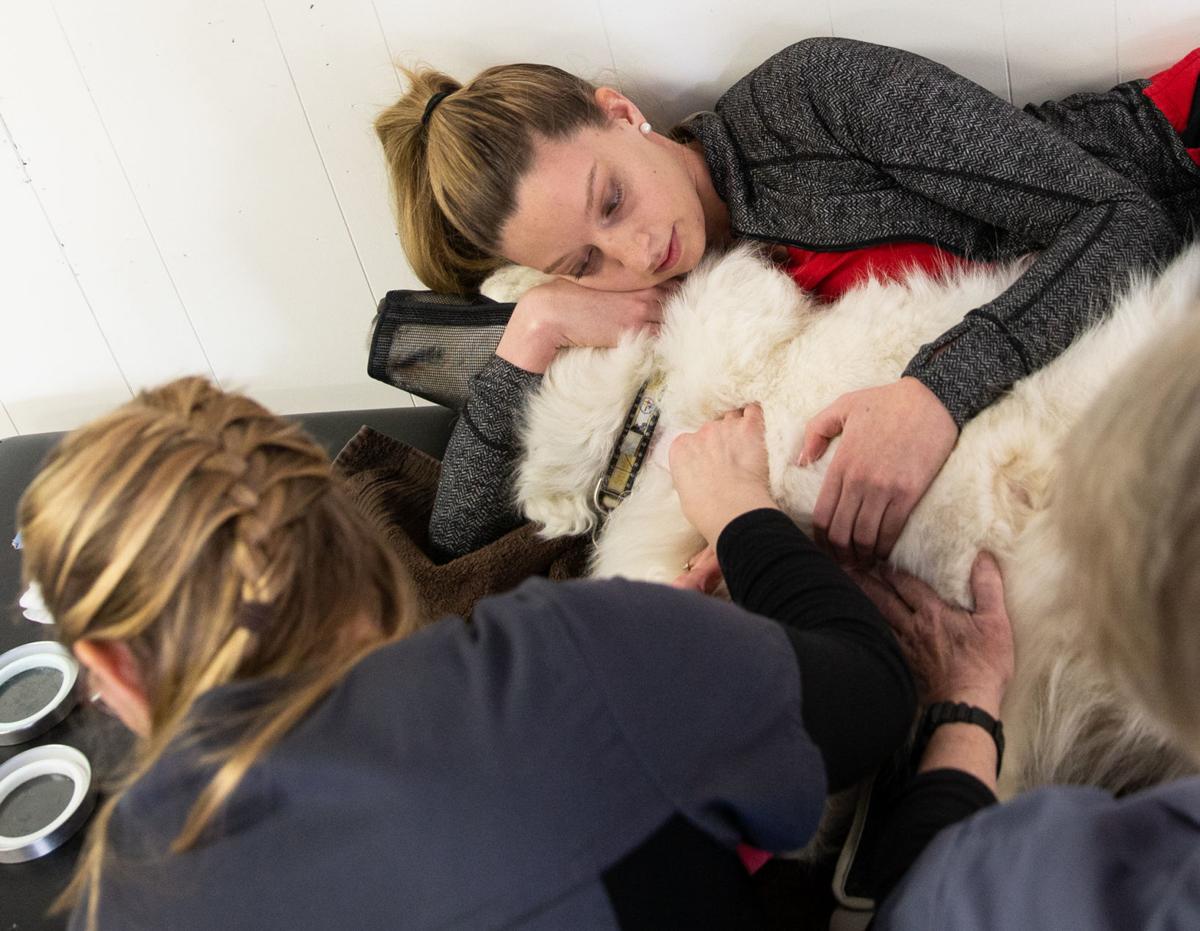 Mills and Randy Brooks (right) keep Oso calm while Call draws a unit of blood. Organizers say the process is not painful. 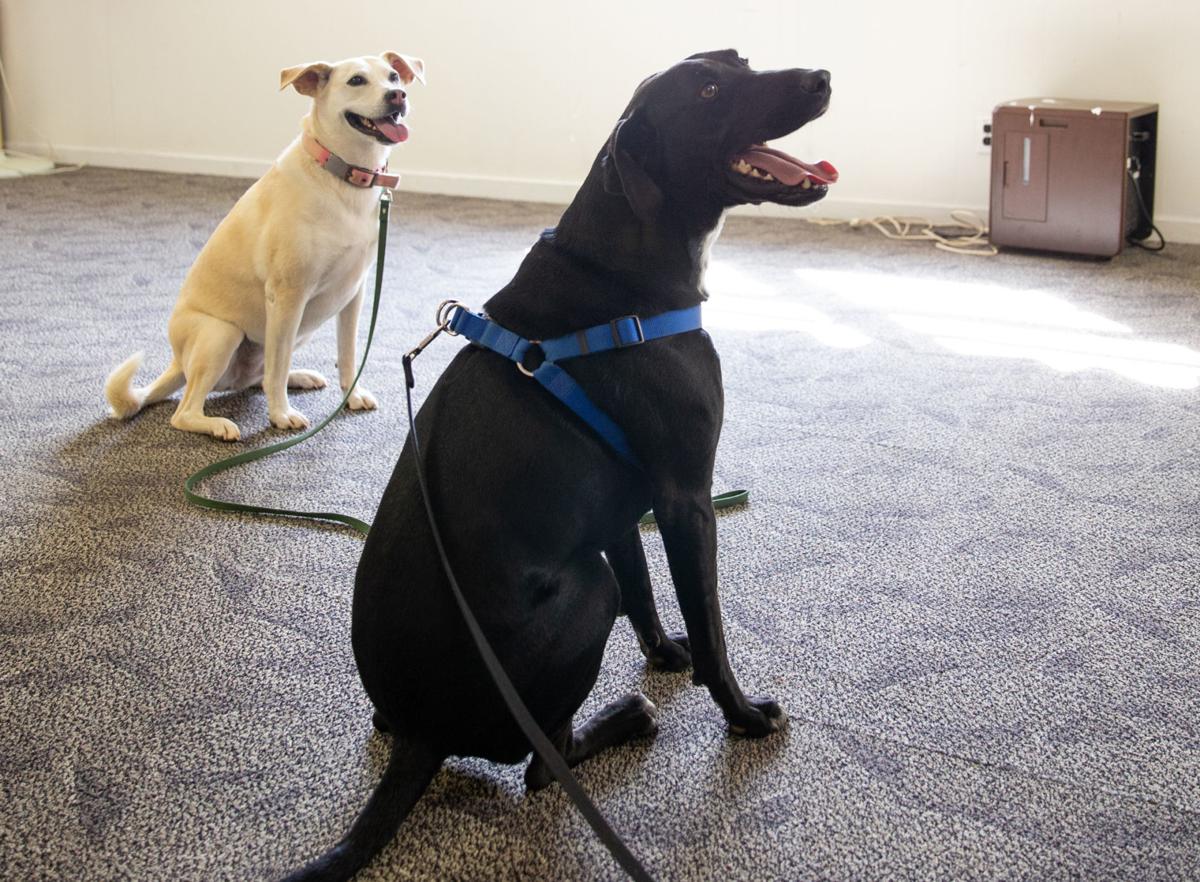 Sunny (left) and Mickey hang out at the Stafford Dog Club during a canine blood drive last weekend.

Casey Mills (center) and Laura Call (right) hold Storm while Dr. Rebecca Scherrer conducts a physical during a canine blood drive. Storm was one of 10 dogs who donated during the event.

Mills and Randy Brooks (right) keep Oso calm while Call draws a unit of blood. Organizers say the process is not painful.

Sunny (left) and Mickey hang out at the Stafford Dog Club during a canine blood drive last weekend.

“Actually, I never even heard of this before,” said Kenneth Paul Schultze, of Stafford. “I never even thought about it.”

On March 14, Schultze, a member of the Stafford Dog Club at 2945 Mountain View Road, brought his two dogs—Sunny and Mick—to a canine blood drive at the club, with hopes his dogs could be of service to other canines in need.

Casey Mills, account manager for the North American Veterinary Blood Bank, said most people don’t realize their dogs are eligible to donate blood or how much of an impact those donations can make on canine blood shortages, not only in Virginia, but across the country.

“There is a critical need for canine blood donors,” said Mills. “We’re here to help the local community and the dog community, but we can’t do that without having donors.”

Mills’ clinic provides blood products to veterinarians located primarily in Virginia by surface delivery, but in emergency situations, the blood bank can expedite shipments by commercial air for morning delivery anywhere in the country.

“We get calls pretty much every day from veterinarians looking for blood,” said Mills.

Saturday’s blood drive came about when Mills, who lives in Stafford, was driving by the Stafford Dog Club last month and noticed the club’s sign at the end of the driveway. Mills called Karen Donnell–Draak, who serves as treasurer of the club, and presented to her the urgent need for blood donors. Mills suggested a possible blood drive be held at the club.

In February, Mills gave a presentation on a proposed blood drive to the club’s 17 members, and a March blood drive was scheduled at the clubhouse.

“All of the members were very receptive,” said Victoria Lewon, president of the Stafford Dog Club.

“[Mills] gave a beautiful presentation, the exact procedure, the advantages of having a blood drive, and what you have to do to qualify your dog as a donor and recipient,” said Lewon. “It’s a benefit for the owner and for the dog, because, you never know when blood is going to be required during surgery.”

John and Mary Molter, of Stafford, brought their Great Pyrenees, Oso, in as a donor.

“We love dogs, we’re crazy about them,” said John Molter. “I never heard of this until I found out about it recently, but it makes sense. I had no idea.”

Although drawing a dog’s donation of 450 milliliters of blood—just under two cups—takes just a few minutes to accomplish, a half-hour period was allotted on Saturday for each donor.

“The donation process is rapid, it’s not the same as for humans and it’s not painful,” said Dr. Rebecca Scherrer of Manassas, a contract veterinarian who performs physical exams for dogs at the blood bank. “It’s the same as a normal blood draw.”

Scherrer, who is also an emergency room veterinarian, said most people don’t realize dogs share many of the same physical issues that humans do and are dependent on donated blood supplies in emergency situations.

“They get into traumatic accidents, they have diseases. … I don’t think people think about that,” said Scherrer. “All animals have some range of blood loss that they may experience in their lives, and we should have donations ready for all of our species.”

Mills said first-time potential blood donors are carefully screened for eligibility. Dogs must be between 1 and 7 years old, healthy, and weigh more than 50 pounds.

“That’s a safe weight to pull a full collection,” said Mills. “The bigger the better.”

Mills said prior to donating blood, dogs must also be on monthly preventatives, including heartworm, flea and tick medications, as well as having up-to-date rabies and distemper vaccines.

“If we’re going to be distributing blood, we want to make sure it’s coming from a healthy donor,” said Mills.

There are several perks for dogs registered as donors, as well as perks for their owners.

“New donors get a free exam, they also get free annual blood work, which checks for ticks and Lyme disease,” said Mills. “Owners get a copy of those results, so they don’t have to spend money on their own to do that.”

Donor dogs also receive a complimentary nurses’ examination when they donate, which includes a heart and lung checkup. Most importantly, Mills said, if something happens to an owner’s dog that has been a donor, owners won’t have to waste time researching their dog’s blood type.

“It’s a great way to stay on top of their health,” said Mills.

Formed in 2017, the North American Veterinary Blood Bank has about 70 registered donor dogs.

“We were founded a few years ago, after a dog in Fredericksburg needed a blood transfusion,” said Mills.

That dog required five blood transfusions in one week and doctors couldn’t find enough blood to meet the need. The animal died as a result of a depleted supply of canine blood.

“We called all across the east coast and nobody had blood to spare,” said Mills. “The doctors involved in that case said they would never let that happen again.”