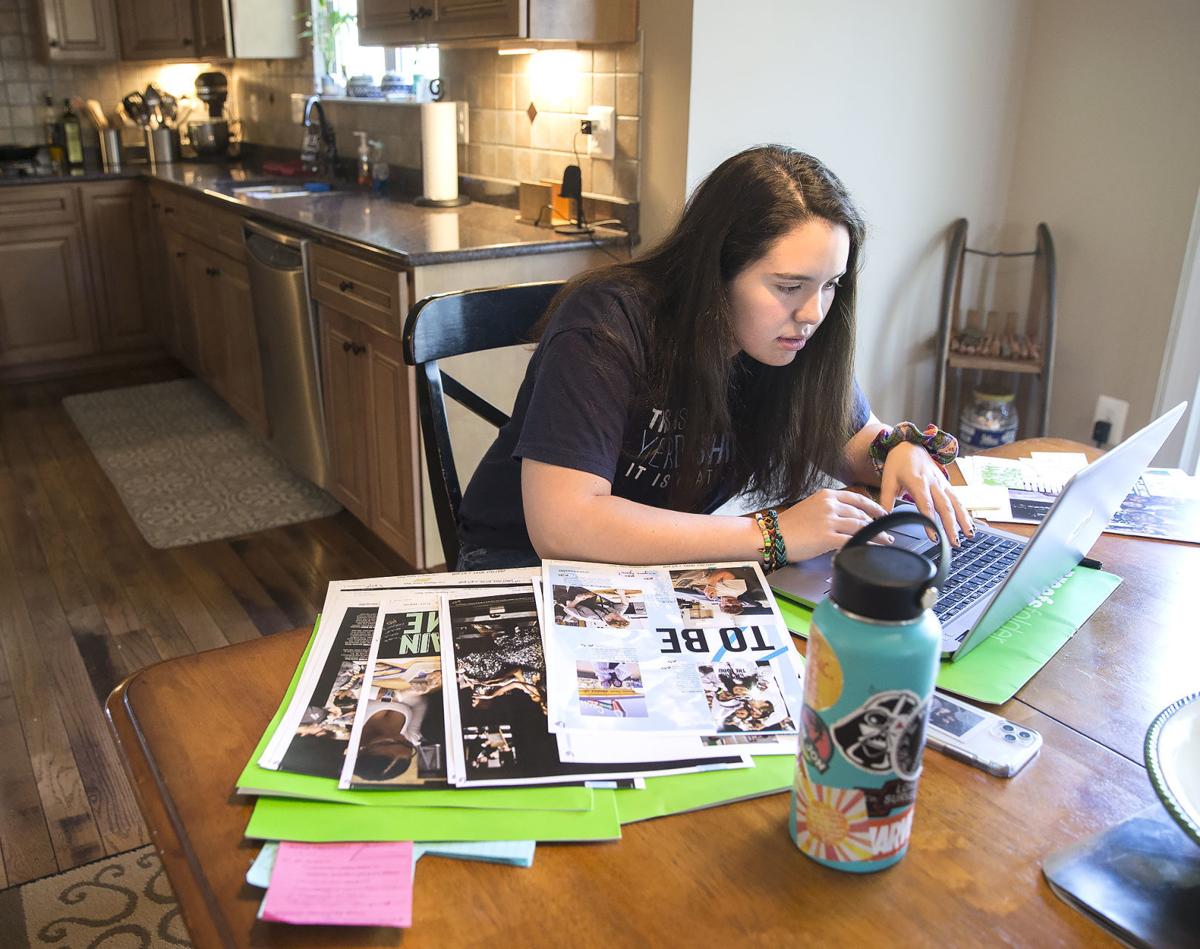 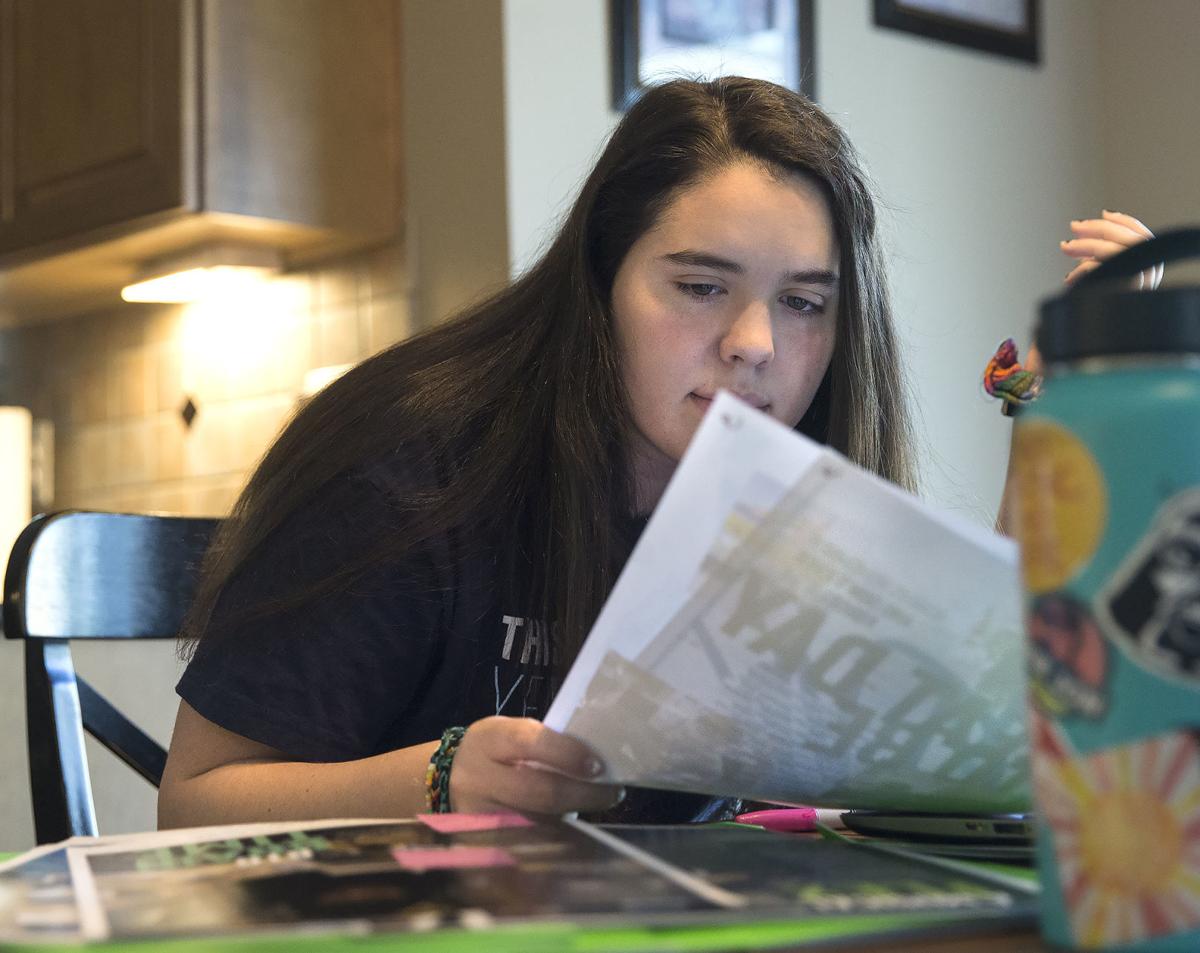 Colonial Forge senior Kaitlyn Fulmore, as well as the rest of the yearbook staff, is working remotely to complete this year’s book. The theme was changed to: ‘It is what it is.’ 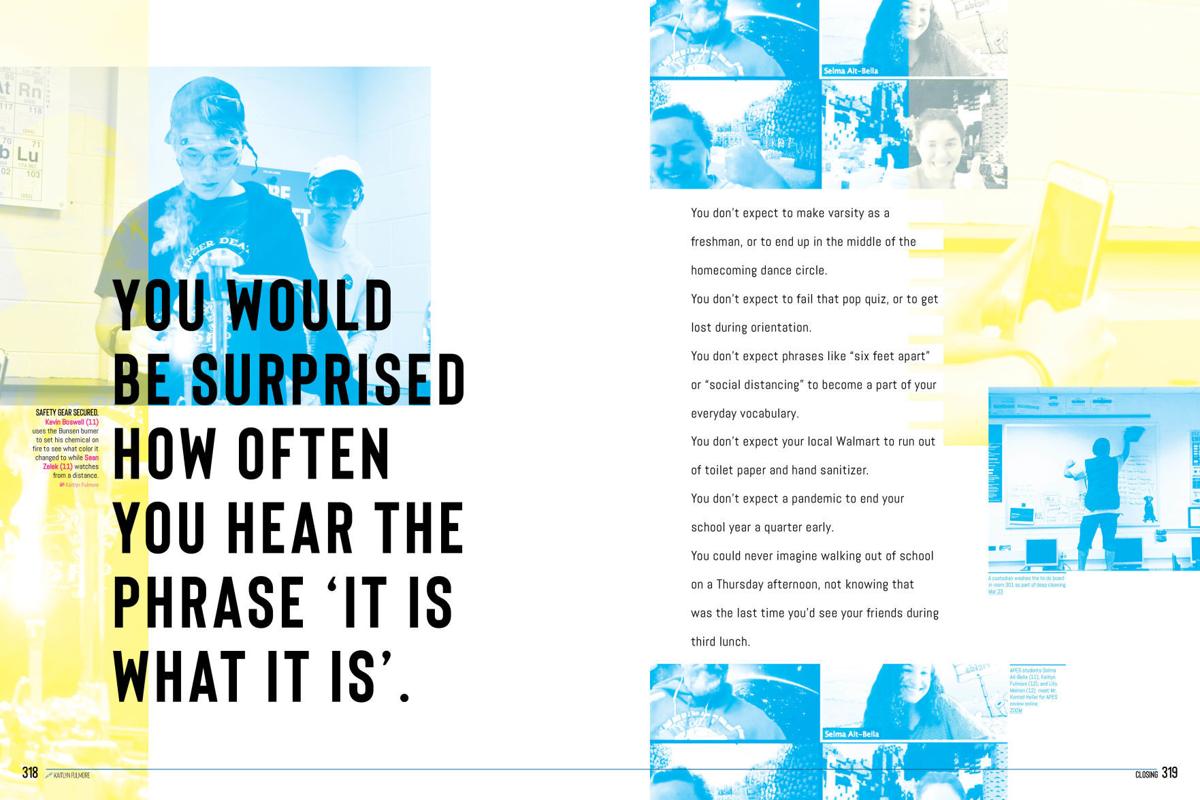 A spread from the Colonial Forge High School yearbook. 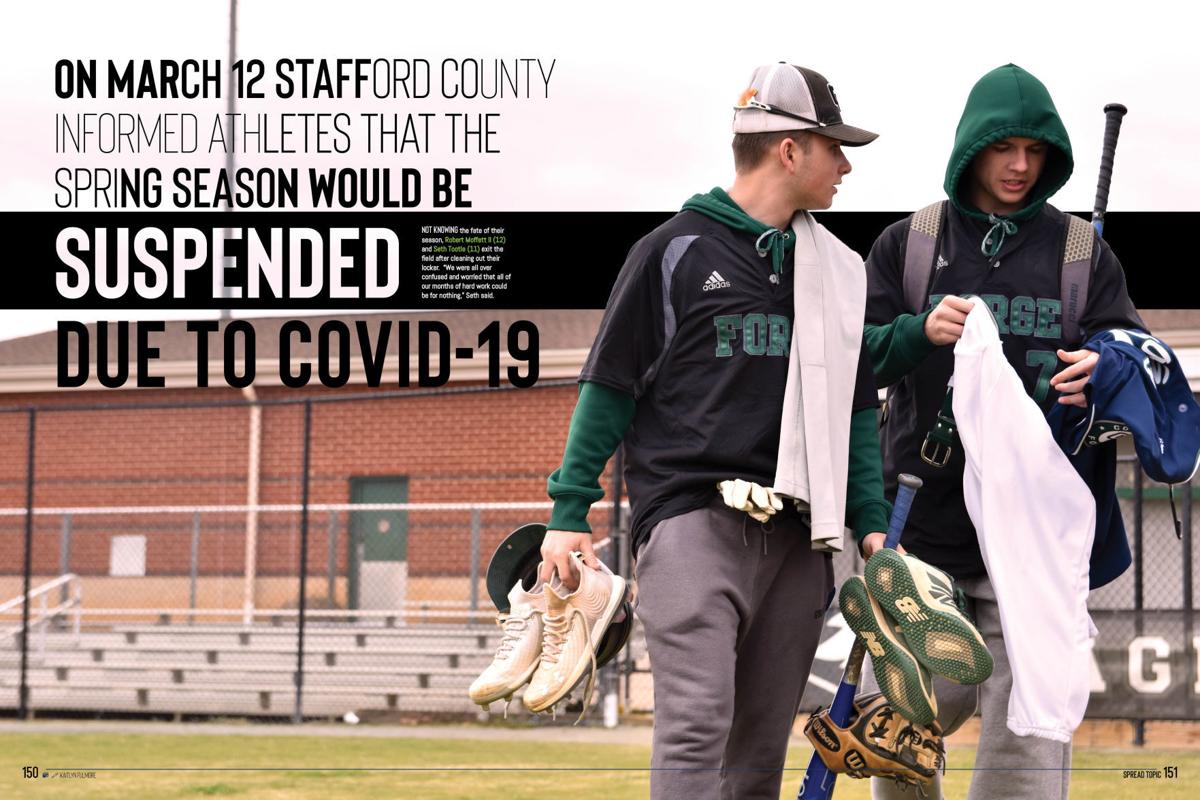 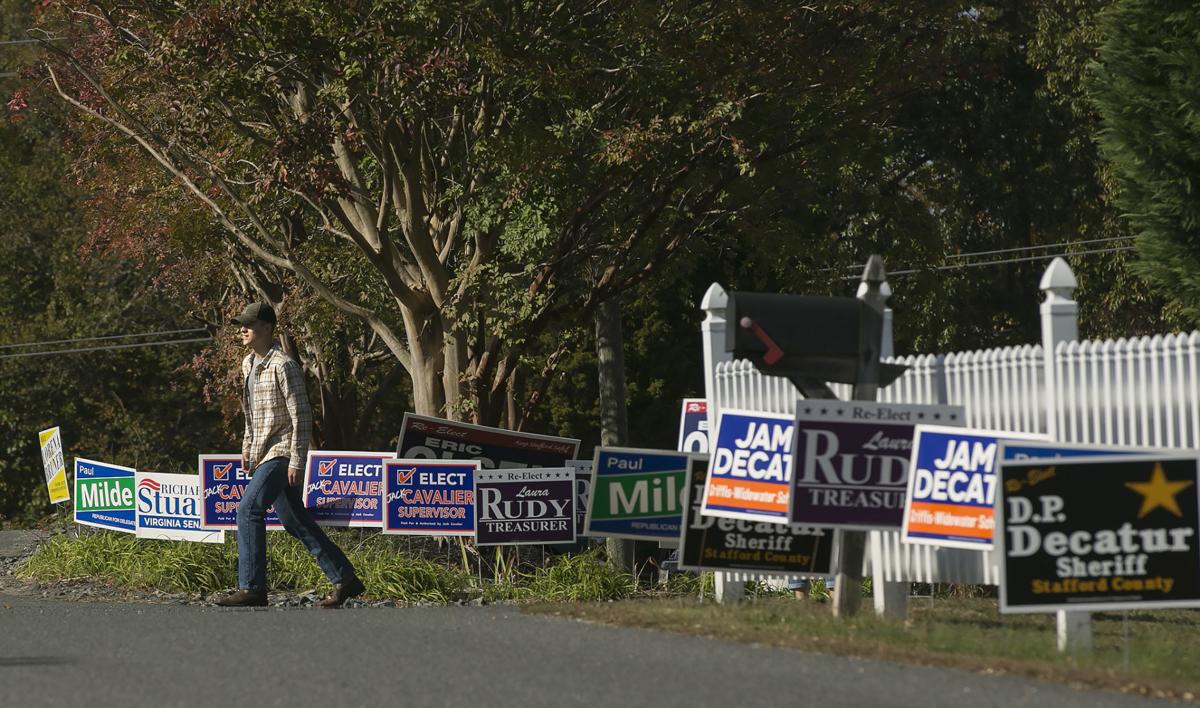 Colonial Forge senior Kaitlyn Fulmore, as well as the rest of the yearbook staff, is working remotely to complete this year’s book. The theme was changed to: ‘It is what it is.’

A spread from the Colonial Forge High School yearbook.

On it was draft copy for the “Canceled by Covid” spread.

“You could never imagine walking out of school on a Thursday afternoon, not knowing that was the last time you’d see your friends during third lunch,” it read.

“The copy is a little sad,” Kaitlyn said. “I kind of don’t want you guys to read it.”

“You need pictures of students walking out of school,” said Tiffany Kopcak, yearbook adviser. “Pictures that convey that absence.”

Since March 12, when Gov. Ralph Northam ordered Virginia schools to close for two weeks—and soon afterward for the rest of the academic year—the close-knit yearbook staff of 12 has been working from home, sometimes for 12 hours a day, to put together a yearbook for a school year that ended abruptly midway through the third quarter.

“I work until I go to bed,” said senior Joe Kubicki.

The yearbook staff—five of whom are seniors—had to “alter coverage plans to cover what life is like for teens in the pandemic, conduct interviews via email, surveys and social media, have staff meetings and copy coaching via Google Hangouts, sit in the school parking lot so they can access the network and hunt for pictures and manage the stress of moving to online work while on a deadline and grieving the end of their high school careers,” Kopcak said.

The students are putting together a timeline of the coronavirus outbreak as it happens. They’ve interviewed 467 fellow students about the emotional impact of the virus-related cancellations.

They’ve had to redo six spreads and added some “corona flavor” to most of the others, Kopcak said.

One of the new spreads is called “At home with COVID.” Another is dedicated to teachers continuing to teach from home.

They have pictures of student athletes cleaning out their lockers for the year, months before they thought they would have to.

The members of the yearbook staff are so close that they kept finding reasons to extend their first video call after school closed.

“The extent to which they missed each other was palpable,” Kopcak said.

They described feeling “devastated” and “betrayed” by the way the virus has affected them.

But the act of accurately capturing and describing this time for their fellow students and posterity is, they say, comforting.

“The yearbook is not going to be what we thought it was going to be,” she continued. “But it is what it is. You can’t just give up on it.”

Joe said the experience is teaching them “personal responsibility.”

“I could have not done the work, but then I would have been a big jerk,” he said. “I don’t want to do that. I want to see this finished.”

Brian Guan said he’s seeing the positive in their situation.

“It’s more like we’ve had the setback, but we get to learn how to communicate through the circumstances,” he said. “It seems like we’re not giving up. There’s nothing stopping us.”

Across Interstate 95, students at another Stafford County high school are also staying engaged with their extracurricular activities despite school being closed.

“What our kids have decided to do instead is do this digitally,” Seaman said. “We have a list of seniors, and they’ve signed up to contact all of them and give them a website where they can pledge to vote or register to vote.

“We’re really trying to win this Governor’s award for the fourth consecutive year,” she continued. “The kids have really taken it on.”

Faculty co-adviser and government teacher Patrick Holshouser said the students have embraced making something good out of a bad situation.

“When we told them the assembly would have to be canceled, these kids, instead of complaining and whining, they did just the opposite,” he said. “It was, ‘What can we do?’ ”

Through emails and phone calls, the club members registered 85 seniors to vote in only five days, Holshouser said, and are well on the way to their goal of registering at least 65 percent of the 433 eligible seniors by May 18.

“I’m just so proud of these kids,” Holshouser said.

Brooke Point Principal Tim Roberts said the Inspire Virginia club is helping to create “a sense of normalcy” for their fellow students.

“They’re creating a sense of community because these students are reaching out to their peers,” he said. “And the other side of it is that they’re creating an environment where kids can feel like they’re doing something that’s bigger than them. That’s what I’m really proud of. Yes, we want to keep kids engaged in learning, and this is how we keep kids engaged, period.”