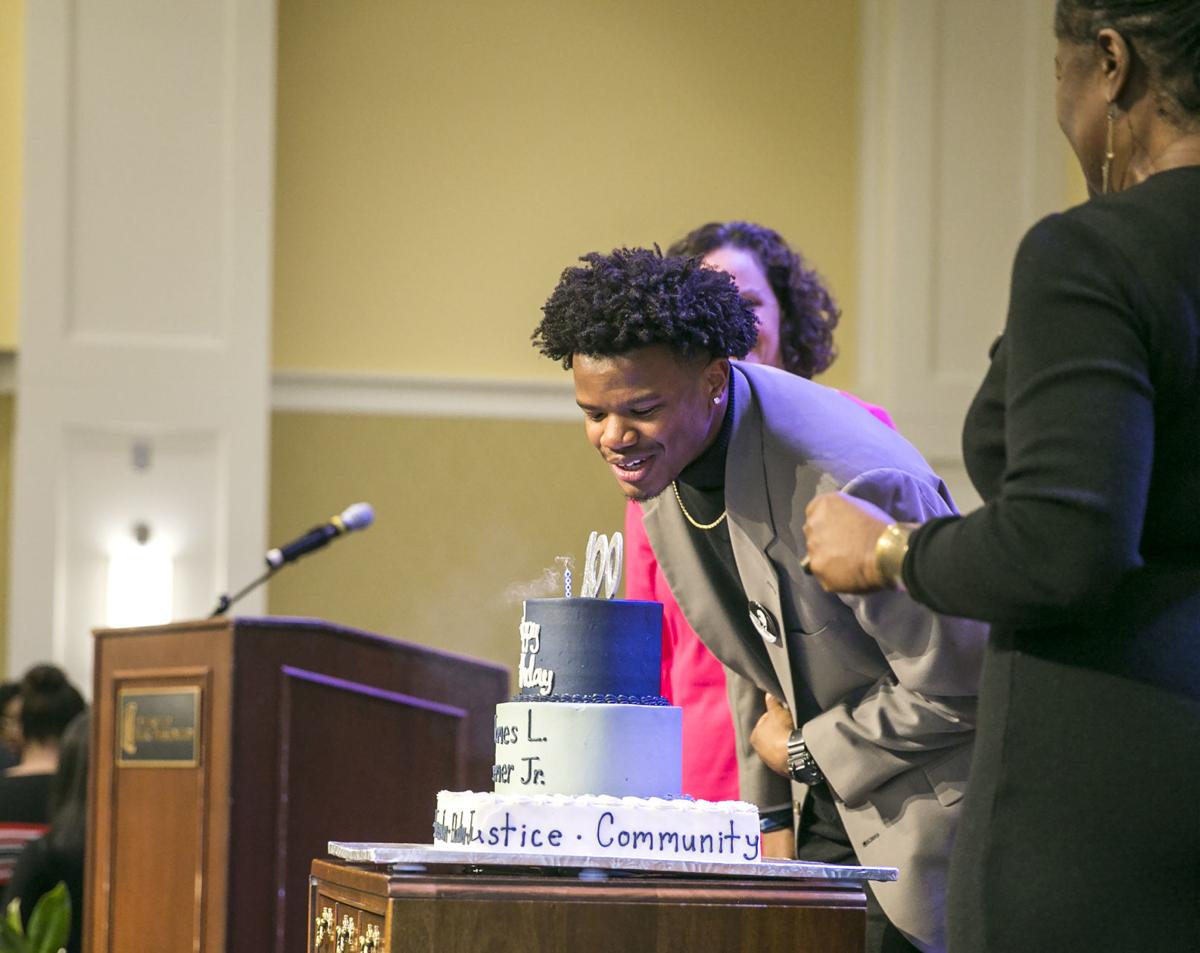 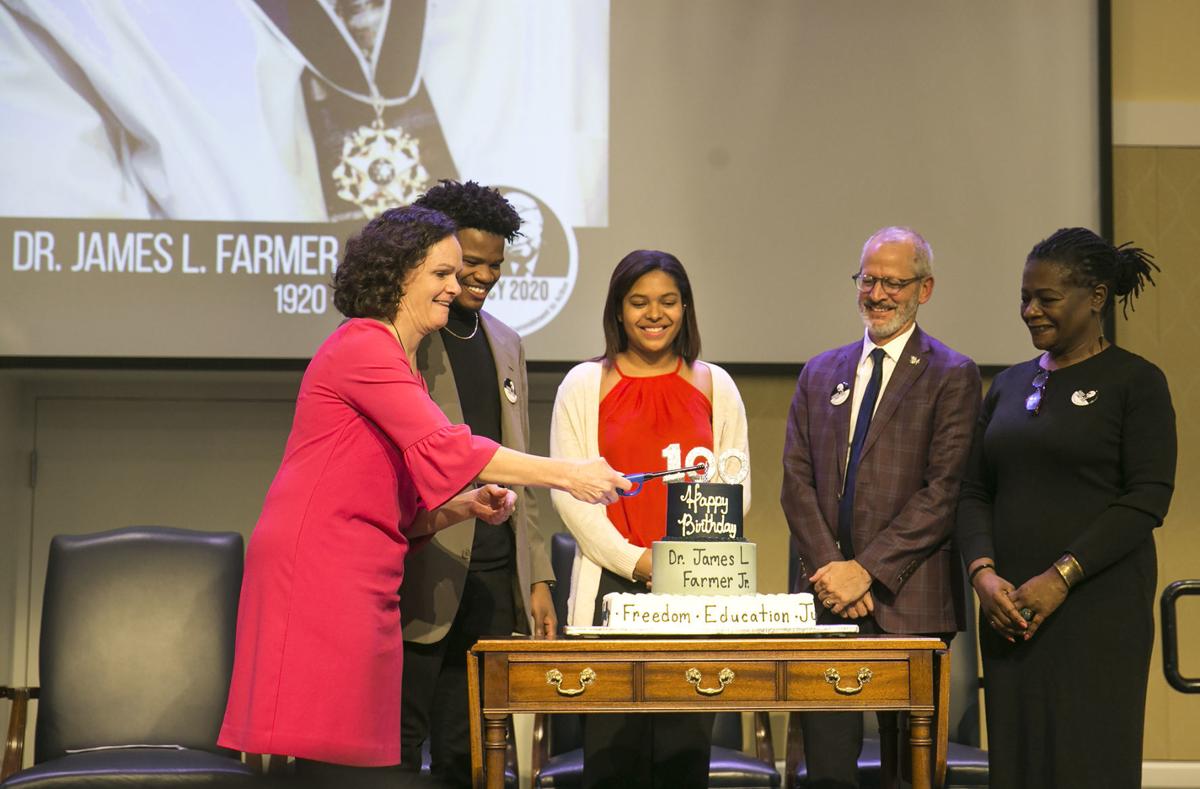 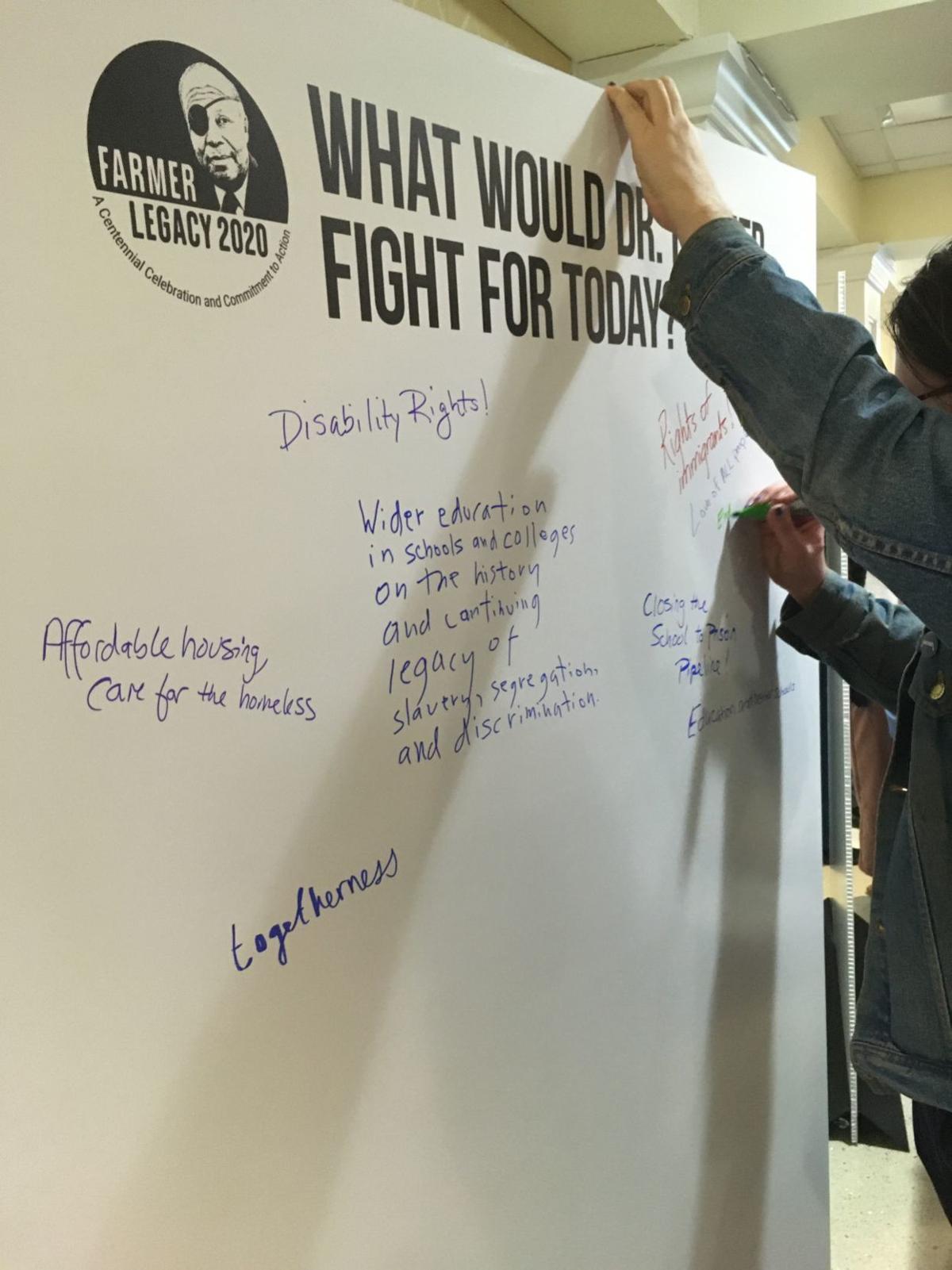 Launch party attendees write what they think Farmer would fight for if he were alive today. 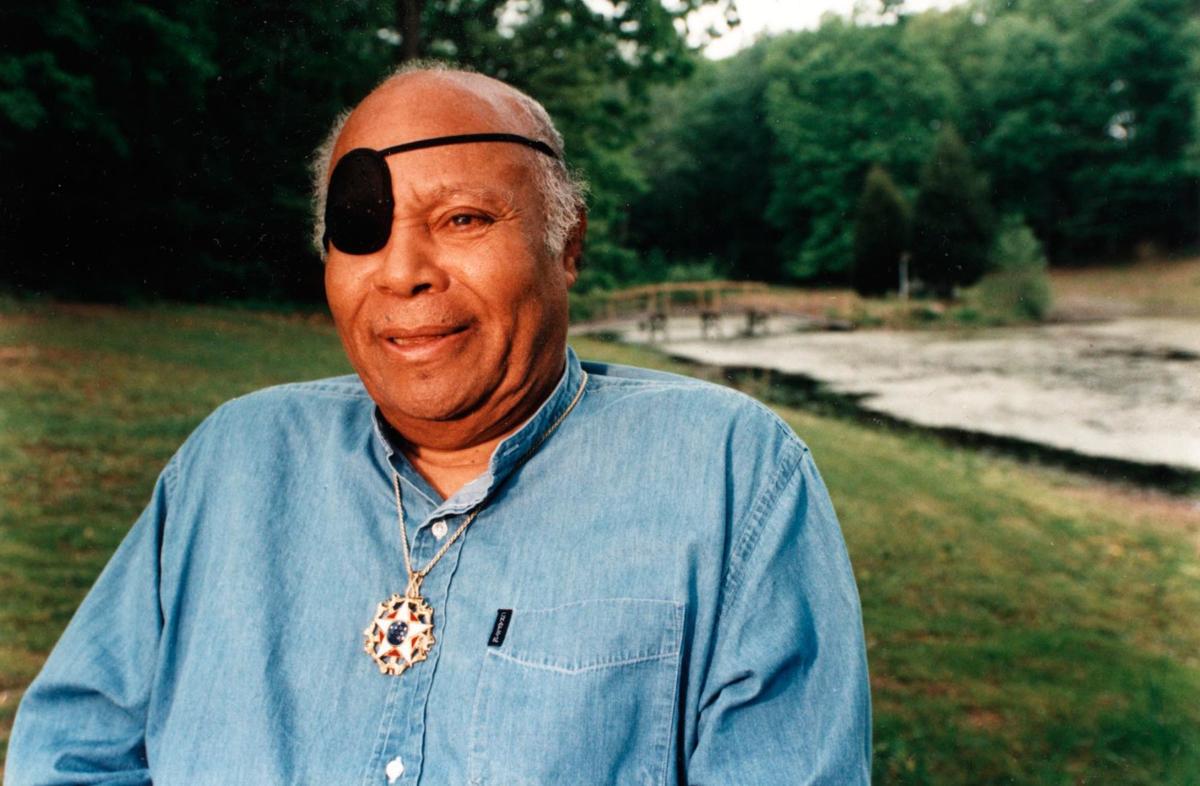 In 1998, Farmer received the Presidential Medal of Freedom. 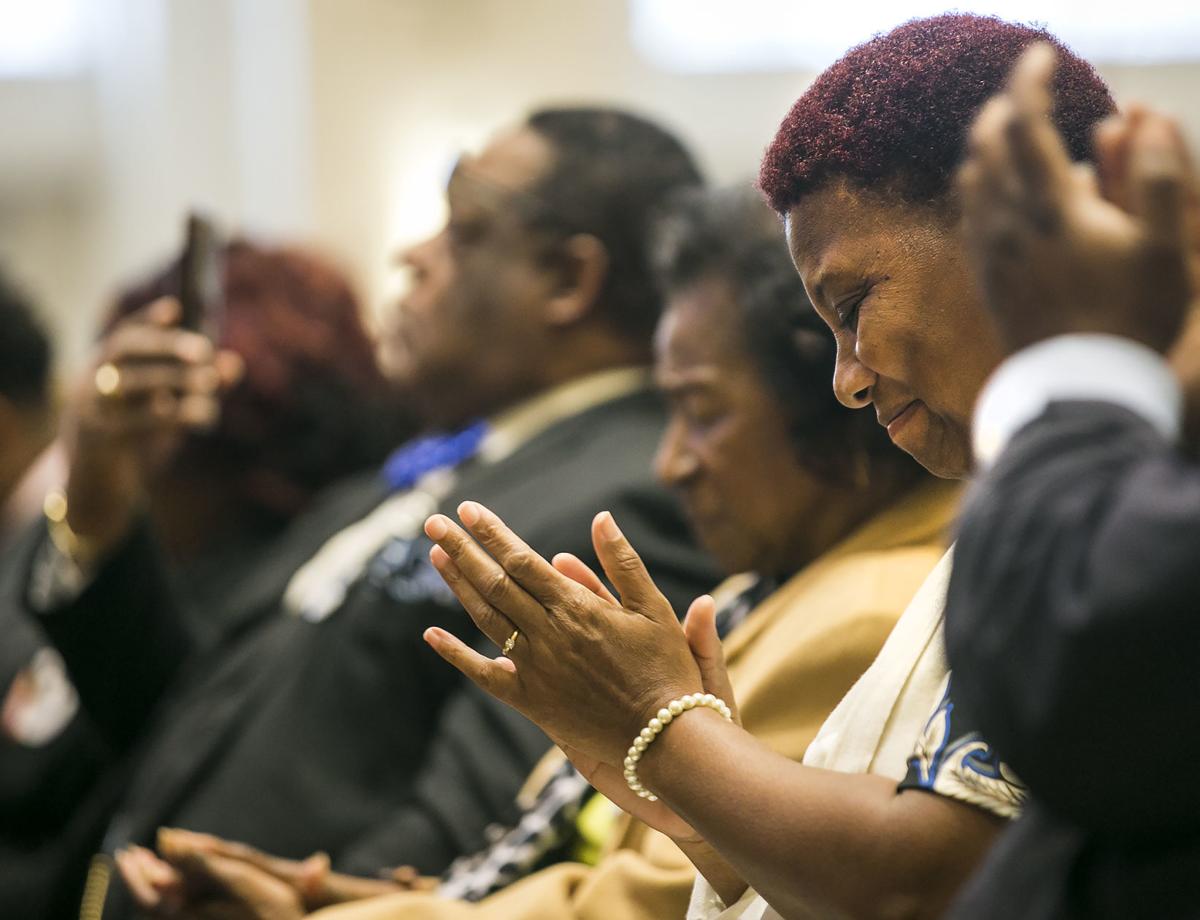 The crowd applauds after a video about Farmer’s human rights legacy during a celebration marking his 100th birthday.

Launch party attendees write what they think Farmer would fight for if he were alive today.

In 1998, Farmer received the Presidential Medal of Freedom.

The crowd applauds after a video about Farmer’s human rights legacy during a celebration marking his 100th birthday.

“Welcome to our birthday party,” University of Mary Washington president Troy Paino said to the crowd filling Chandler Ballroom at the University Center on Monday afternoon.

The birthday party’s guest of honor, civil rights leader James Farmer, was not present, because he died in 1999—but his legacy of faith, hope and optimism for a more equitable future, despite setbacks, is still alive in the UMW community, Paino said.

“This is what Farmer has given to UMW,” he said.

Farmer was born Jan. 12, 1920, in Marshall, Texas, into a family of educators. At 22, after completing two university degrees, he cofounded the Congress of Racial Equality, or CORE, which organized several protests of segregated facilities in the 1940s and 1950s, all under the principle of nonviolent direct action.

Farmer moved to Spotsylvania County and became a professor of history at what was then Mary Washington College in 1985. He taught until just six months before his death in July 1999.

The previous year, Farmer received the Presidential Medal of Freedom, the highest civilian award in the United States, for his leadership during the civil rights era from President Bill Clinton.

He is known as one of the “Big Six” leaders of the civil rights movement, along with Martin Luther King, John Lewis, A. Philip Randolph, Whitney Young and Roy Wilkins.

One day after what would have been Farmer’s 100th birthday, UMW launched a Centennial Celebration of Farmer’s life and legacy. Farmer Legacy 2020 will be a yearlong commemoration of Farmer’s achievements and other social justice milestones through exhibits, lectures and performances.

U.S. Rep. John Lewis, who along with Farmer was one of the 13 original Freedom Riders and is the last surviving member of the Big Six, is serving as the honorary chairman of Farmer Legacy 2020. He was scheduled to speak at Monday’s celebration and launch, but is now being treated for stage 4 pancreatic cancer.

Courtney Flowers, a junior anthropology major who helped to organize the Farmer Legacy celebrations, said James Farmer is the reason she came to UMW from California.

In the process of researching Malcolm X for a project her junior year of high school, she kept coming across Farmer’s name as a source.

“I had to see if this ‘Farmer’ was a credible source,” Flowers said with a laugh.

When she looked him up, she came upon a website about Farmer created by students he had taught at UMW. Flowers was so inspired by Farmer and by the students that she wanted to become part of the UMW community.

“That project really changed the trajectory of my life,” she said.

Ford, who also went on this fall’s social justice trip following the path of the 1961 Freedom Riders, said these two experiences were “life-changing” and gave him a better understanding of the bravery of Farmer, Lewis and others.

“[The experiences] really helped me understand the sacrifices that were laid before me to help me get to where I am today,” Ford said.

He recalled that he asked Lewis what the current generation of students can do to continue the work of the earlier civil rights activists.

Lewis’ answer was, “You cannot forget the fight that has been fought so far.”

“[The fight for social justice] is not over,” Ford said. “Our generation has to be the generation to make that change.”

Paino said the Farmer Legacy celebration, which will continue for the rest of the academic year, serves as “a call to action” for UMW students and the wider Fredericksburg community.

“If we continue to work together to commit ourselves to the ideals of justice, equality and service to our community, we are going to experience a better day,” he said.