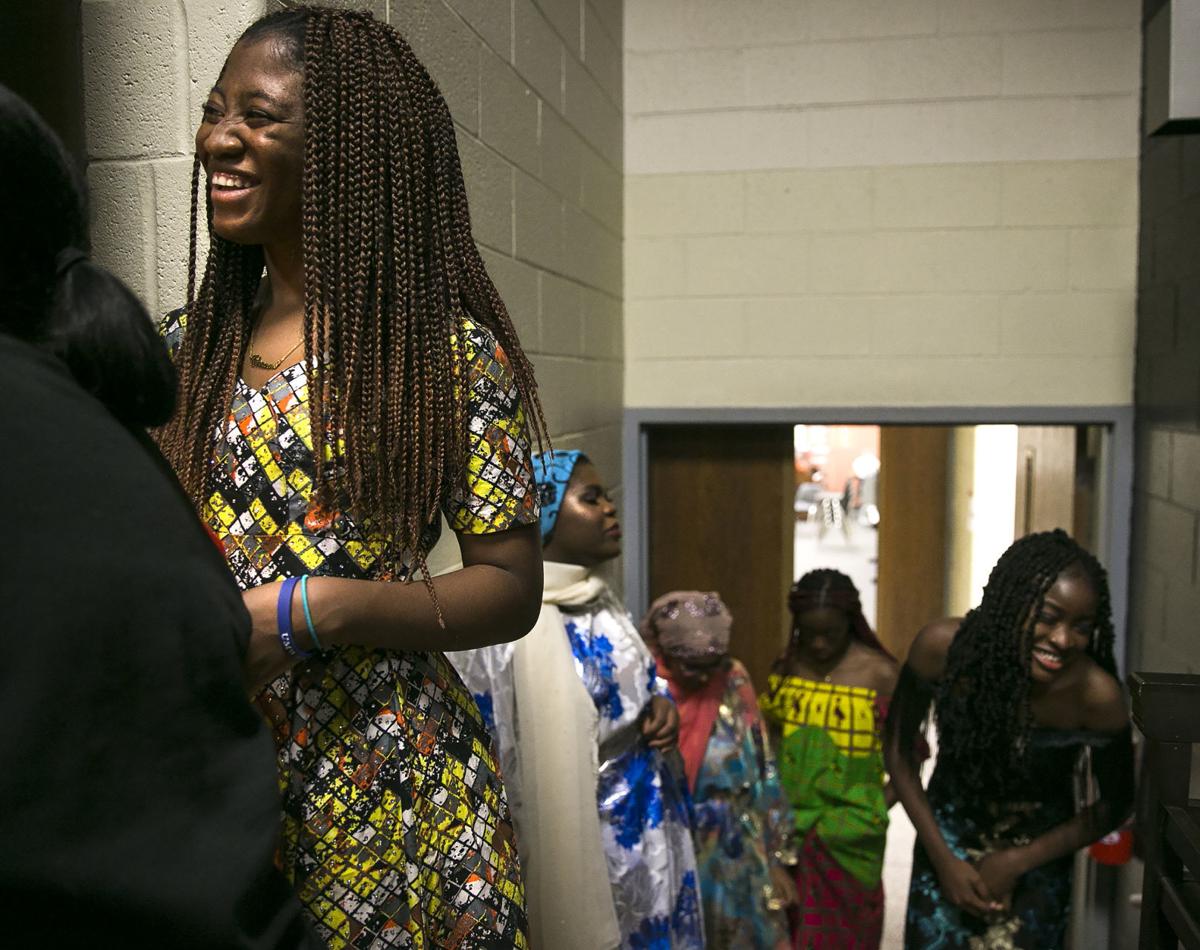 Fashion show participant Orianne Kazadi watches the Rev. Hashmel Turner walk the runway during the Unity Festivalat Walker–Grant Middle School in Fredericksburg on Saturday. Students from the University of Mary Washington volunteered to sport outfits that represented their ethnicity. 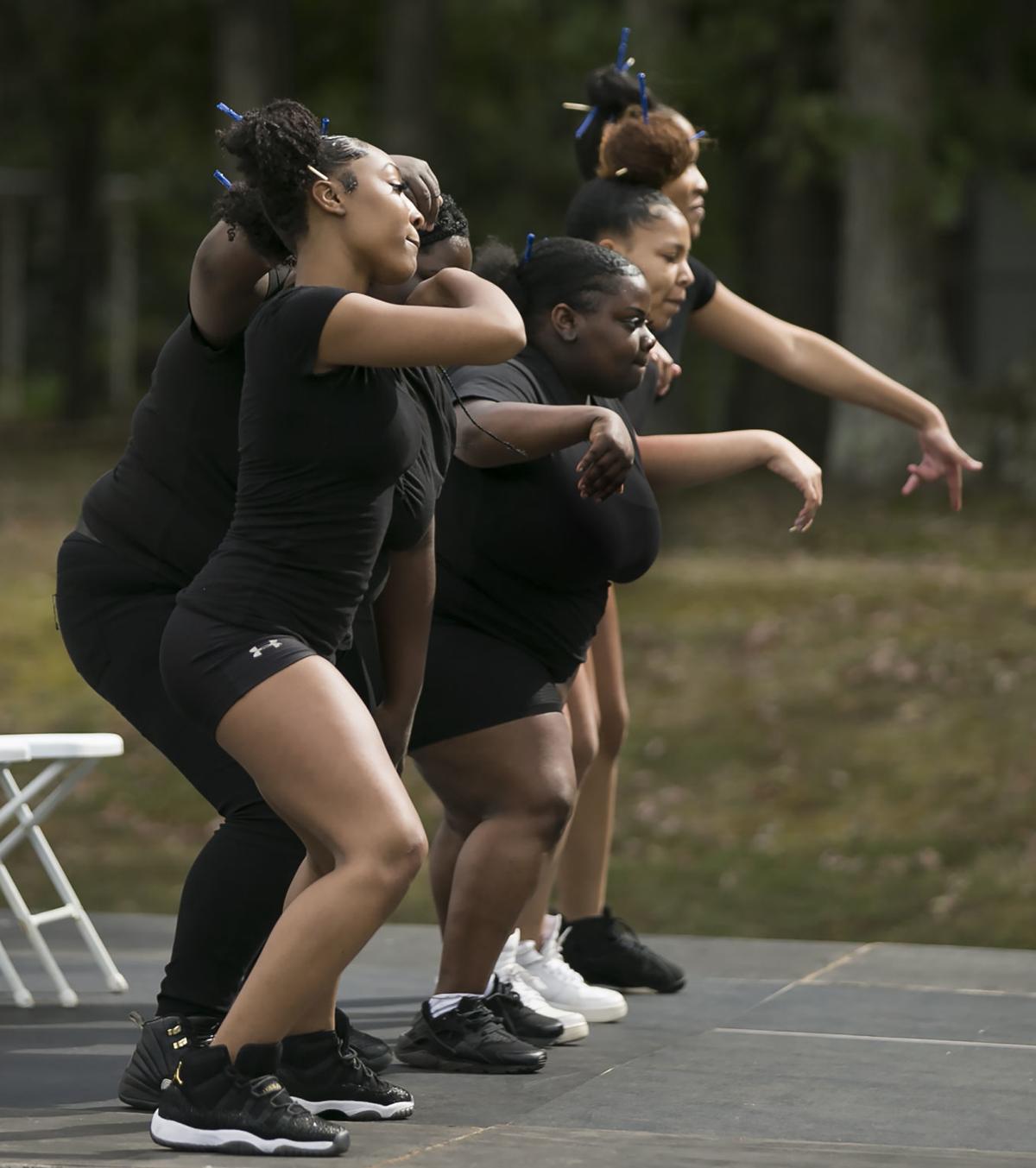 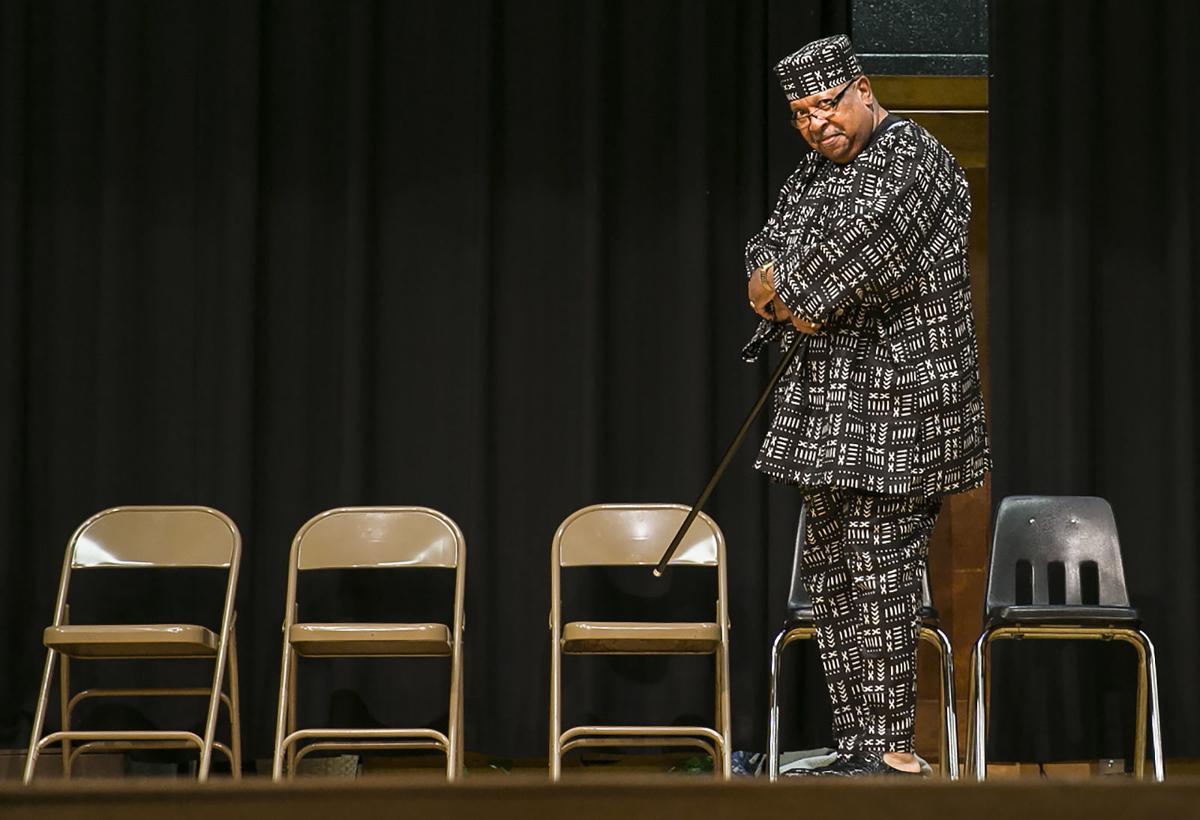 The Rev. Hashmel Turner strikes a pose during an international fashion show at the second annual Unity Festival at Walker–Grant Middle School on Saturday.

Fashion show participant Orianne Kazadi watches the Rev. Hashmel Turner walk the runway during the Unity Festivalat Walker–Grant Middle School in Fredericksburg on Saturday. Students from the University of Mary Washington volunteered to sport outfits that represented their ethnicity.

The Rev. Hashmel Turner strikes a pose during an international fashion show at the second annual Unity Festival at Walker–Grant Middle School on Saturday.

The students were from the University of Mary Washington, but the costumes they were about to model at Fredericksburg’s second annual Unity Festival were from half a world away.

Bilqiis Sheikh–Issa, who hails from Prince George, Md., and is the daughter of parents originally from Somalia, was proud to be wearing a dirac, which she called a “very vibrant and colorful dress typically worn to showers and wedding.”

Next to her was Dana Tawiah, from Ghana, in a dress with an Ankara print. The model noted that the green in the print represents nature, yellow the country’s mineral wealth and the peacocks sprinkled liberally about were a nod to the Ghana’s royal family, “because they are majestic and in royal colors.”

The fashion show was one of many pieces of education and entertainment Saturday afternoon at the festival staged at Walker–Grant Middle School in Fredericksburg. Its central focus: “raising the level of diversity acceptance” in the community.

There were arts and crafts, games, face painting, an array of food and vendors offering everything from cosmetics to artwork.

Forrest Parker, director of the festival organizing Boys & Girls Club of the Rappahannock Region, said the idea for it came from the youngsters themselves.

“Several kids were sitting around at the teen center one day talking about life in Fredericksburg and things they’d like to see in the community,” he said. “They came up with something unique, saying that what they feel the community really needs is unity. It needs something that will help those who live here come together and appreciate each other.”

To that end, the organization decided to put on this festival, exploring diverse cultures and races “at a family-oriented celebration that will showcase music, storytelling drama, dance and the visual arts.”

Chris Green of Fredericksburg was the perfect performer for that sort of day, bringing several African drums to perform and to let those who were curious take a turn playing.

“The one I’m playing mostly today is an African djembe drum, which has been around as long as drums have been around,” he told a group of curious festival attendees. “It has a goat-skin head, a wooden shell, is rope tuned and decorated with art on the base.”

Green, who said he became a drummer by growing up in a musical family, added that it would be natural to have one or two djembe drums and even a few sets like the dundun drums he also brought combining rhythms in an African drum ensemble.

While music, drama and fashion filled the stages, many in the crowd were just happy to be at an event aimed at getting away from the partisan divides tearing at so many communities these days.

Yvonne Spencer, a supporter of the Boys & Girls Club and also a member of the Alpha Kappa Alpha service sorority, said it was wonderful to be taking part in “this community event that’s for people of all ages and races. This is people coming together to share talents and to learn from one another. And praise God, we got lucky with such a beautiful day to have it!”

Kianna Rollins, coach of the James Monroe Step Team, said it was important for its young members to be performing at an event that brings the whole community together.

“Plus, most of our students are newcomers to the team, in the ninth or 10th grades, which mean it hasn’t been long since they went to school here,” she said of Walker–Grant. “It’s coming back home for them.”

Sheikh-Issa, in a break from the international fashion show, said she was glad to be modeling a traditional African gown because “it’s important to share pieces of our culture. That spreads education and understanding. And some of these dresses we’re wearing today really showcase happiness and joy.”

Parker said he was happy that the annual Unity Festival brought in so many vendors, sponsors and attendees, and added, “It will continue. We’re already talking about 2020’s festival.”