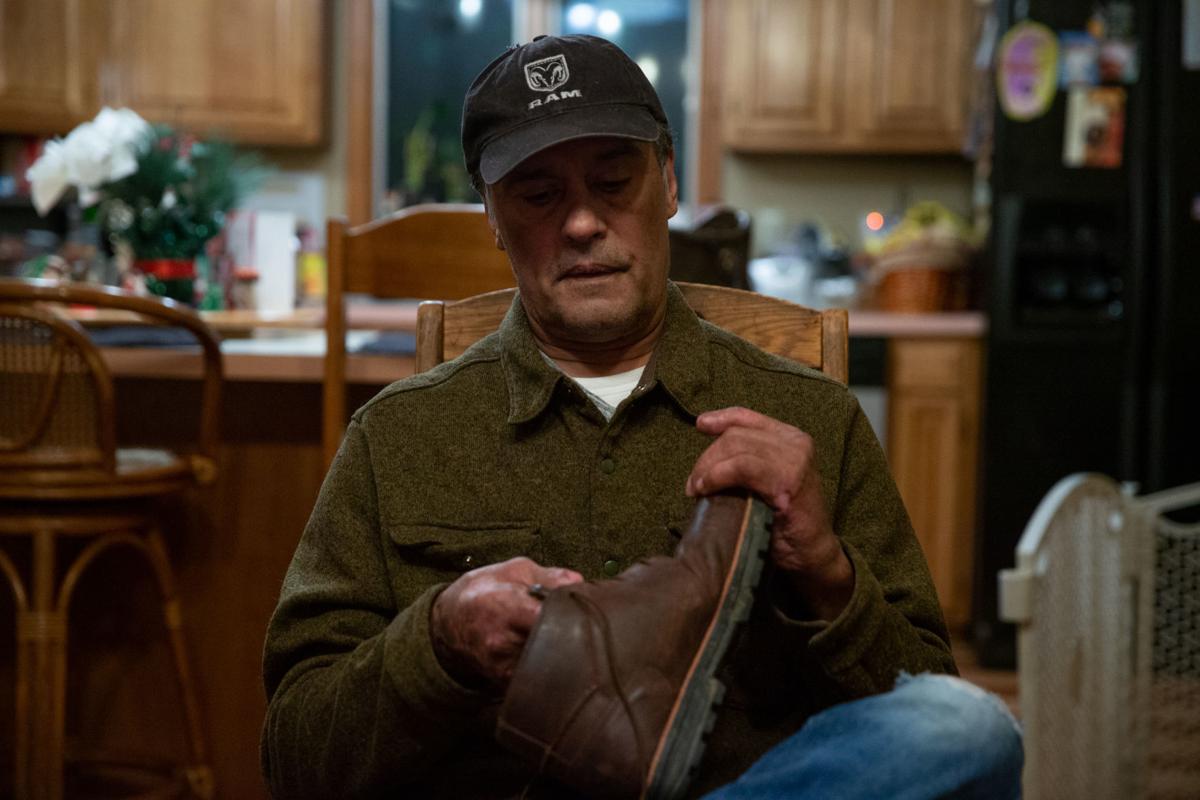 Rocky Mountain spotted fever caused Quintin Beltran to have all his toes amputated. 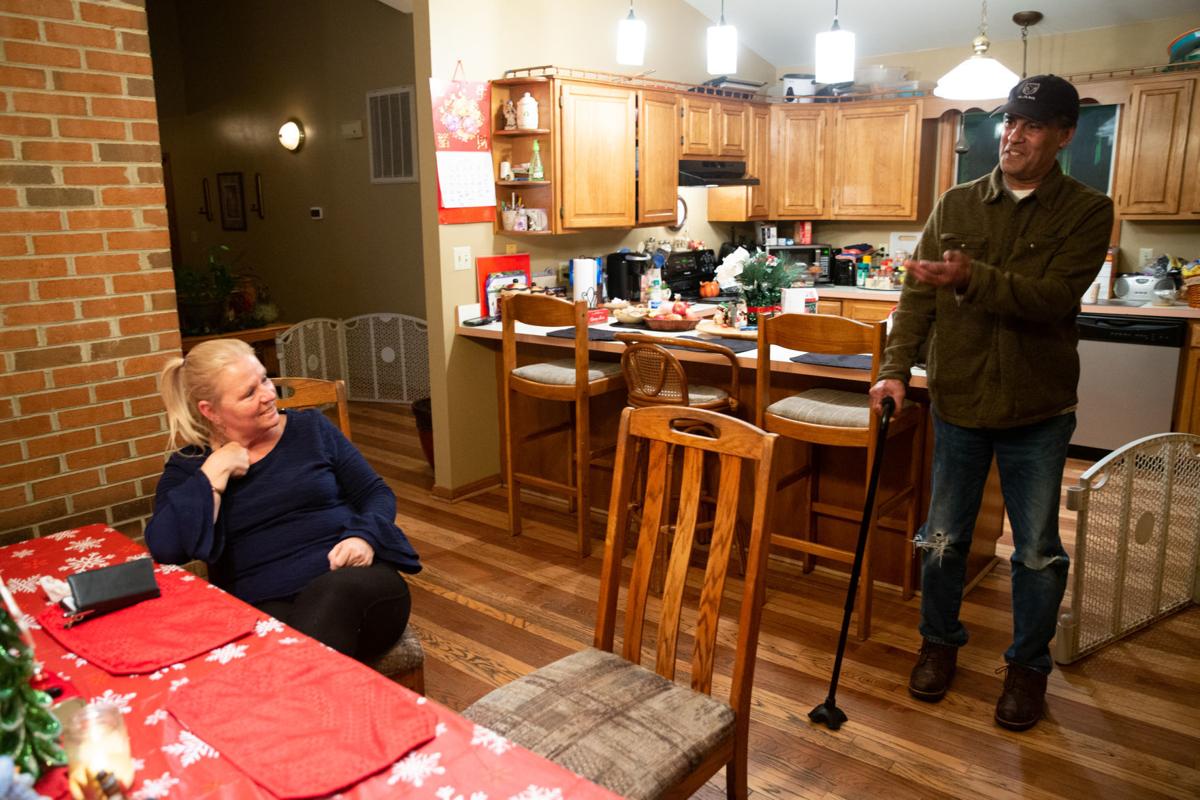 Quintin Beltran says his wife, Diana, ‘deserves a medal’ for taking care of him when he contracted a tick-borne disease. 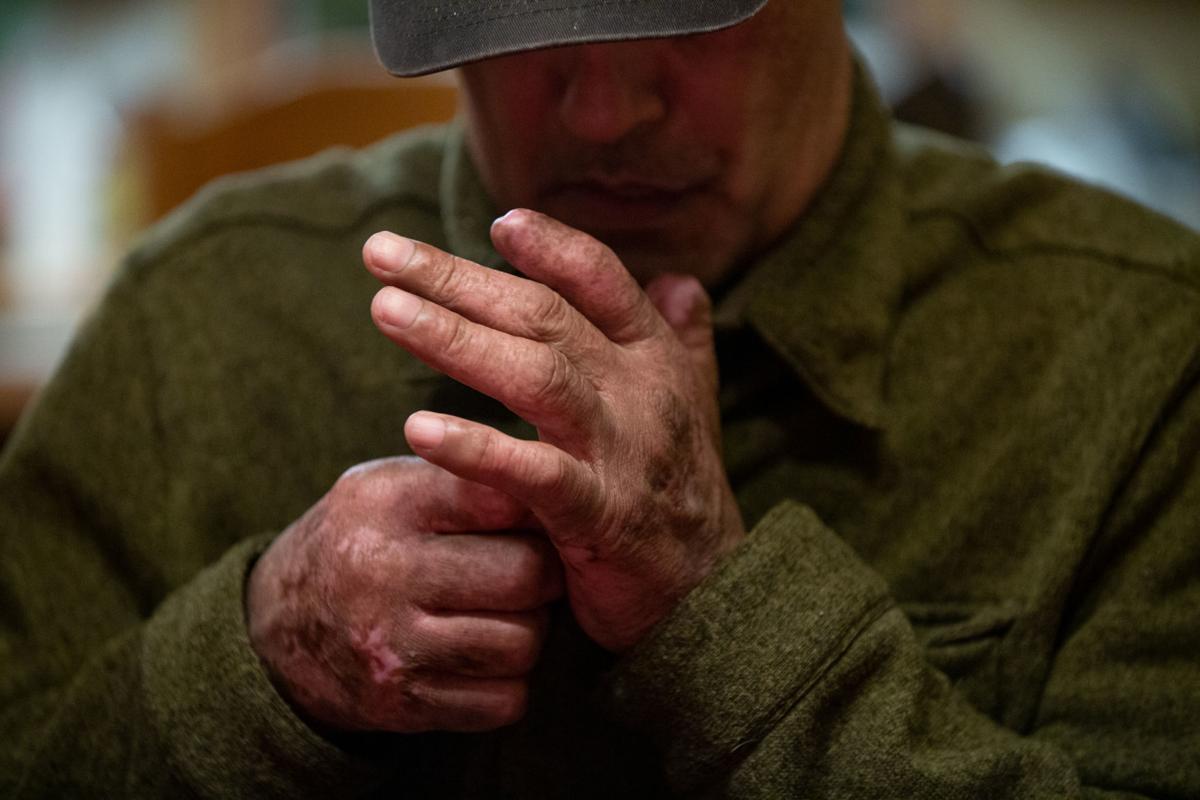 Beltran switched to shirts with snaps because buttons pose a problem since he lost the tips of both thumbs. 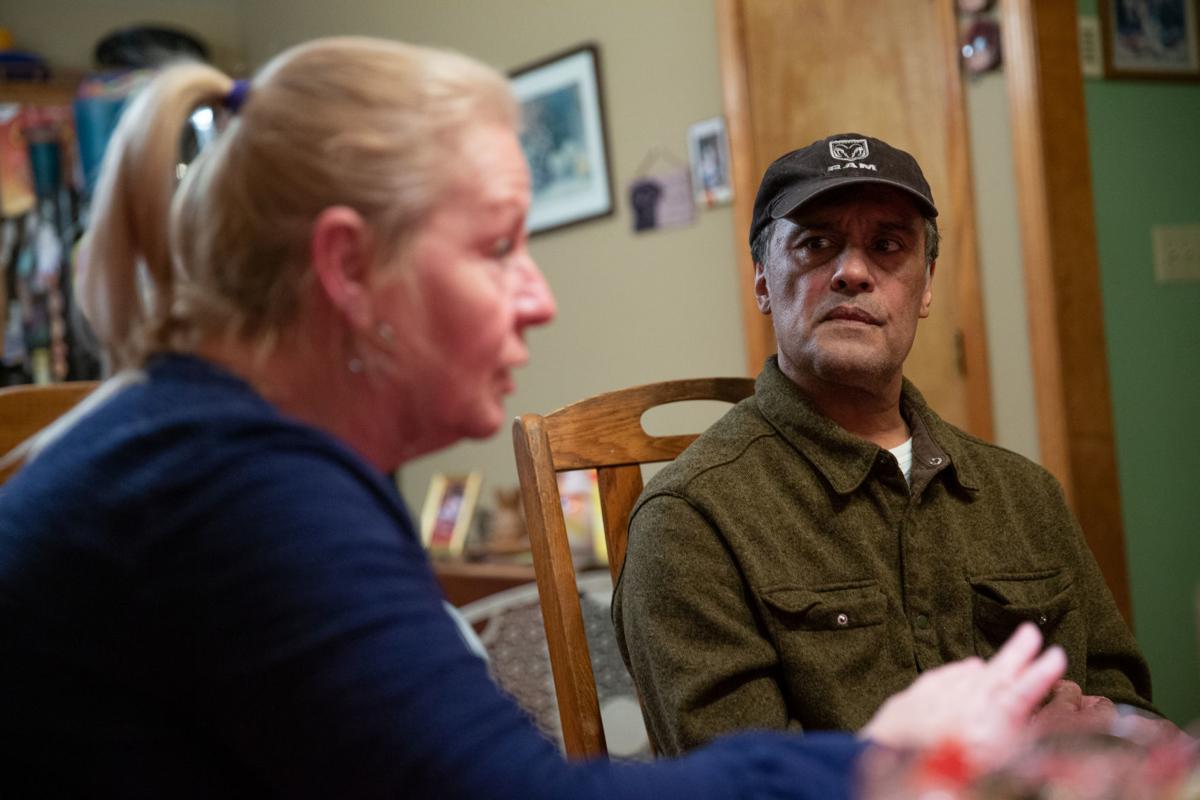 As much as he’s grateful for the support from others, Beltran said he would much rather be giving it than receiving it. 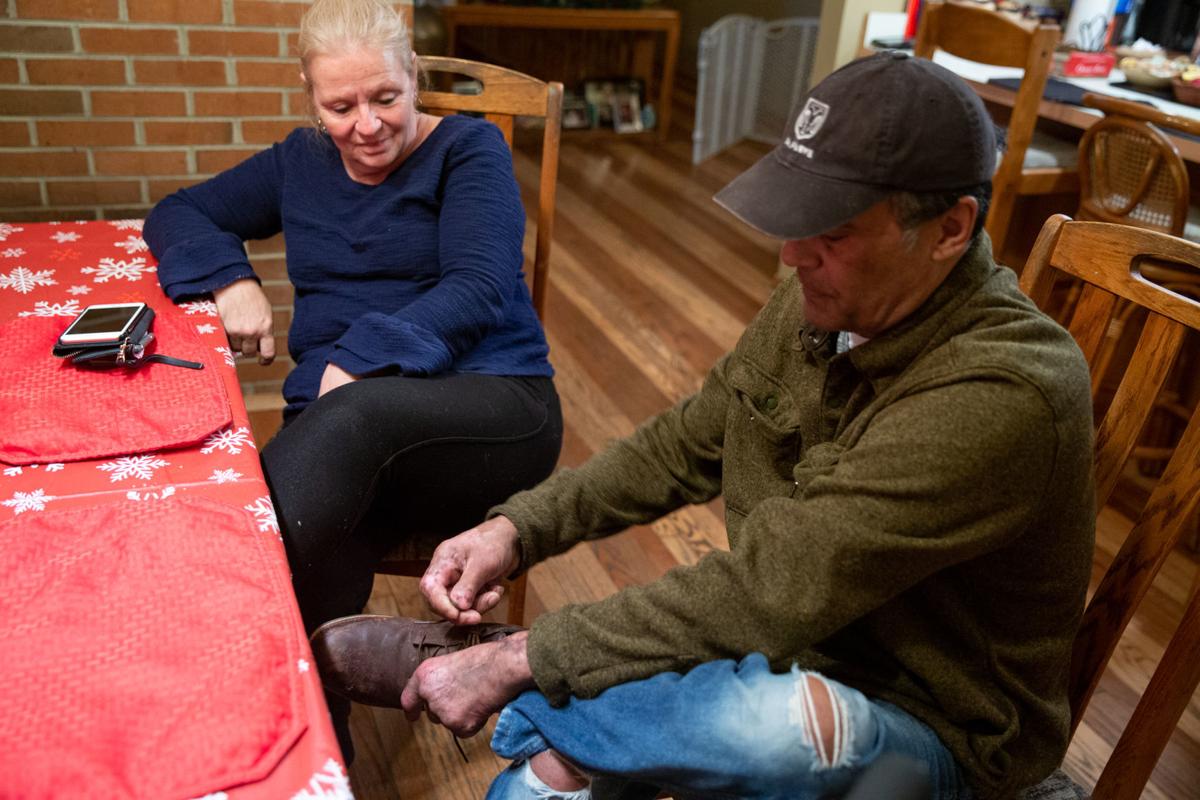 Quintin Beltran has tried Velcro on his shoes, but is determined to do the best job he can at tying his own shoes. His dexterity is limited after he lost tips from both thumbs and an index finger after contracting Rocky Mountain Spotted Fever.

Rocky Mountain spotted fever caused Quintin Beltran to have all his toes amputated.

Quintin Beltran says his wife, Diana, ‘deserves a medal’ for taking care of him when he contracted a tick-borne disease.

Beltran switched to shirts with snaps because buttons pose a problem since he lost the tips of both thumbs.

As much as he’s grateful for the support from others, Beltran said he would much rather be giving it than receiving it.

Quintin Beltran has tried Velcro on his shoes, but is determined to do the best job he can at tying his own shoes. His dexterity is limited after he lost tips from both thumbs and an index finger after contracting Rocky Mountain Spotted Fever.

He holds onto a cane for support because he’s still not used to this new version of himself. The 60-year-old lost all the toes on both feet, and another 2 1/2 inches of flesh and bone from his left foot, after an insect no bigger than a pinhead changed every aspect of his life.

Beltran contracted Rocky Mountain Spotted Fever after a bite from a common American dog tick in April. The devastation caused by the deadly disease and the side effects of powerful drugs—given when his organs started shutting down and death loomed—resulted in a loss of blood to his extremities.

Infection set in, and doctors had to amputate his toes, the tips of both thumbs and the top of the index finger on his left hand.

Beltran also was left with short-term memory loss and aching joints similar to those caused by rheumatoid arthritis. His liver has recovered, but his kidneys are still failing, and he’ll need dialysis if they deteriorate further.

“It’s been a long nine months,” said his wife, Diana. “But we are so blessed that Quintin was at our dinner table for Christmas.”

Likewise, he’s thankful for small mercies such as wearing shoes again after seven months without them. Because his left foot was cut down from a size 10.5 to size 6.5, he needed custom-made orthopedic spacers in his shoes to give him even footing.

He also had to learn how to walk again. There wasn’t time for physical therapy after he spent six weeks at VCU Medical Center in Richmond this spring, including three weeks in a coma and more than a month in intensive care. Doctors focused on the serious infections that ravaged his limbs and threatened his organs.

So, Beltran, a floor contractor who started working at age 14, taught himself how to get around in a wheelchair, then progressed to crutches before graduating to a cane.

Then, in the next breath, the Spotsylvania County man acknowledged the financial, physical and emotional toll the episode has taken on him and his wife. He was the breadwinner of the family, and she said her “filler” income has turned into the couple’s main source of revenue.

“I’m not saying we’re on top of the world or anything,” he said.

“But we are so thankful for the kindness of the community,” she said. “If it wasn’t for them, we wouldn’t be sitting here in this house, right now.”

Quintin Beltran was self-employed before the tick bite and didn’t have health insurance. He learned he qualified for Medicaid the day after a story about him appeared in The Free Lance–Star in July, but later discovered the coverage won’t go back far enough to cover the bulk of hospital bills.

He’s applied for Social Security disability but was told he didn’t qualify because his spouse makes more than $29,500 a year, Diana Beltran said. They plan to reapply again after they file their 2019 tax return.

“Doctors have said they don’t want him working,” she said, although her husband is eager to contribute again to the family income. “We’re behind on our mortgage and I can barely keep the lights on.”

The Beltrans raised more than $10,000 through a Go Fund Me page created by their granddaughter, but Diana Beltran said she doesn’t know how to keep the drive going. Plus, she works full-time in auto sales and has scant free time between that “and trying to keep him alive” to apply for help from local organizations.

Spotsylvania resident Rita Lewis reached out to Diana Beltran after she saw the story about their plight. She’s a member of the ladies auxiliary of the Fraternal Order of Eagles in Fredericksburg, which paid the couple’s mortgage and electricity bill one month. Lewis also brought book bags for their grandchildren in late summer and money for their holiday dinner in December.

“We got a big old ham,” Quintin Beltran said to company the day after Christmas. “We’d love to make you a ham sandwich.”

Lewis said she wanted to pay back the help friends had given her. For 15 months, she’s needed chemotherapy treatments for cancer that started in her colon and has spread to her liver. Friends have driven her to appointments twice a month.

“People have been helping me so much,” Lewis said, “and I felt the need to give back to someone, and they just seem to be the ones that needed the help.”

Quintin Beltran is amazed by that kind of support and the way people at the Thornburg Food Lion hold the doors open for him or ask how he’s doing. The gestures help when he’s determined to get on with his life, but can barely tie his shoes because of his stubby thumbs.

“You’d be surprised how important these babies are,” said the American Indian whose California accent makes him sound like a surfer dude. “Man, I can’t even use a pair of pliers.”

Then, he extended his hands to show blotches of discolored skin, like that of a burn victim, all the way up his arms. That’s the result of the bacterial infection brought on by the tick bite, caused by the organism Rickettsia rickettsii.

“It really trashed my skin,” he said.

Always the voice of encouragement, his wife added: “But it didn’t get on your face.”

Diana Beltran believes her husband will “reinvent” himself, just as she had to in 2011 when she had lung cancer. After two surgeries and treatment, she no longer could keep her schedule as a district salesperson. She switched from selling mattresses to online sales of automobiles.

“That’s the beauty of life,” she said. “You get to hit the reset button.”

Quintin Beltran is more than ready to do that, but has to wait for his body to recover.

“I’m willing,” he said. “I’m just popping out of my clothes, wanting to do something.”

'Such a big guy was taken down by a little tick'

Quintin Beltran cringes in pain while his wife, Diana, works as tenderly as she can to change the dressing on his wounds. He’s suffered damage…

Amazing. Really sucks that our health care system has devastated yet another family, though........just not right