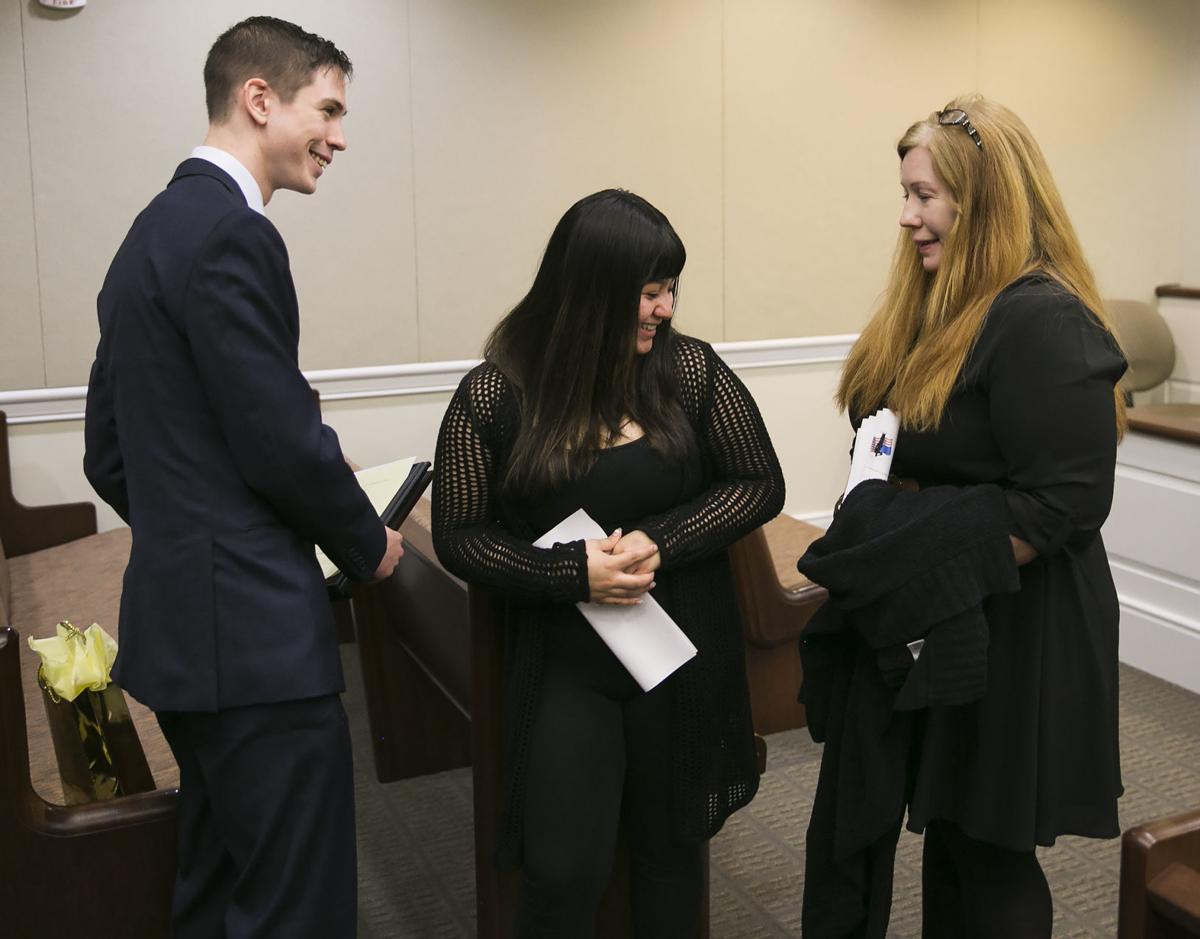 ABOVE: Navy veteran Liam Antinori (from left), his girlfriend Natalie Medina and mother Alana Antinori share a light moment after his graduation from the Rappahannock Veterans Docket at the Spotsylvania County Courthouse. 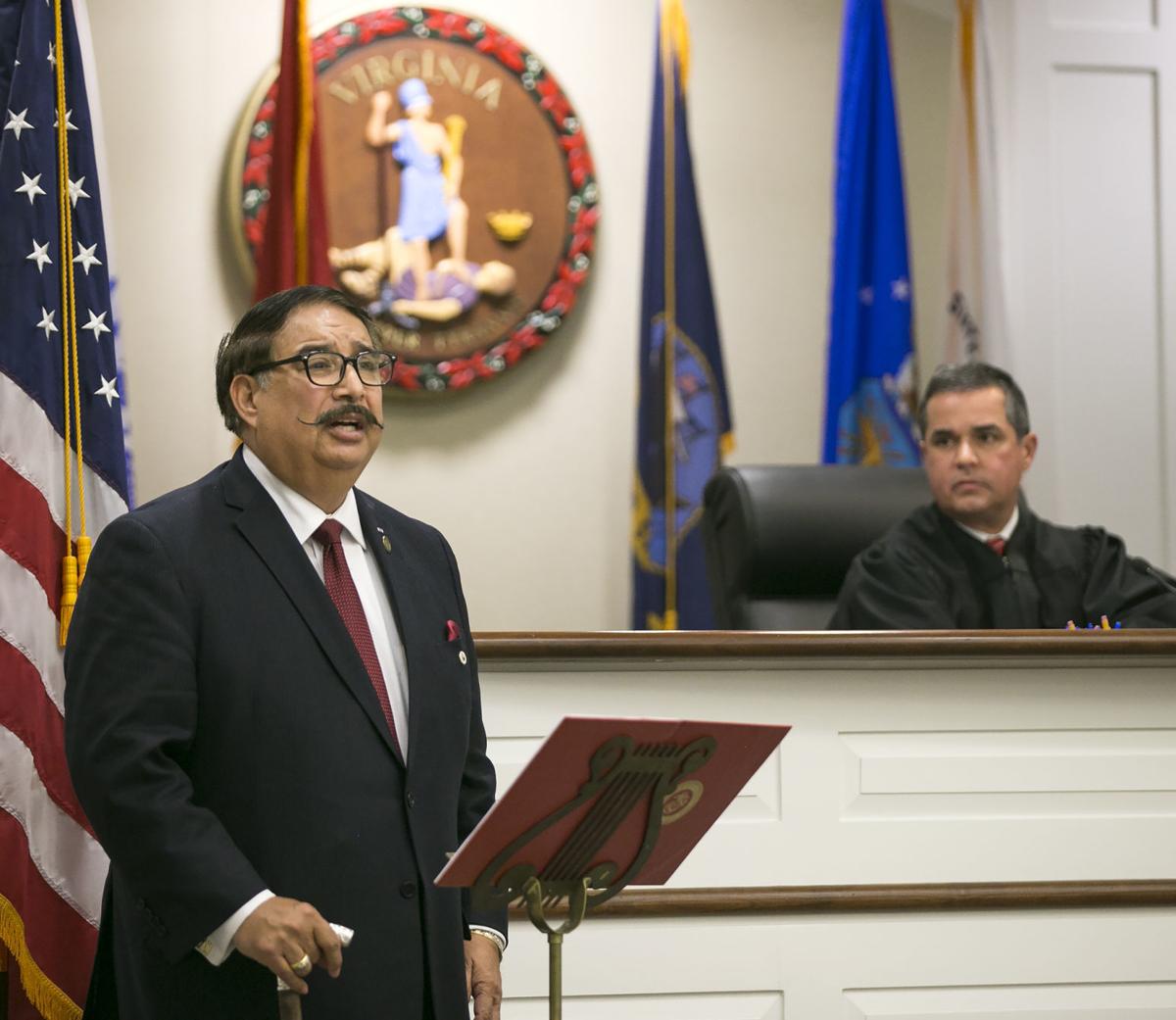 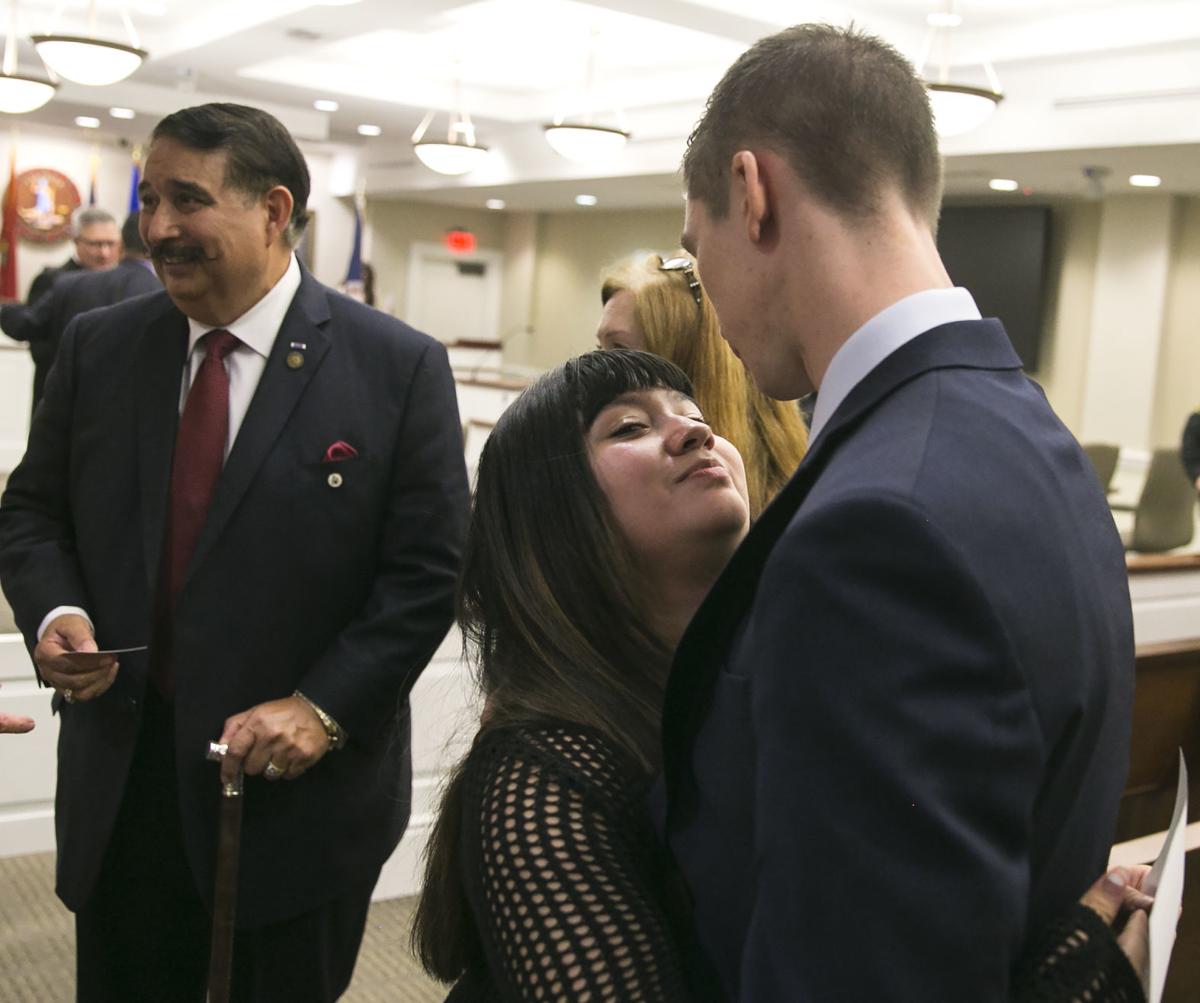 Liam Antinori’s girlfriend, Natalie Medina, gives the Navy veteran a hug after he graduated from a new court program that gives vets facing criminal charges a chance to get treatment instead. 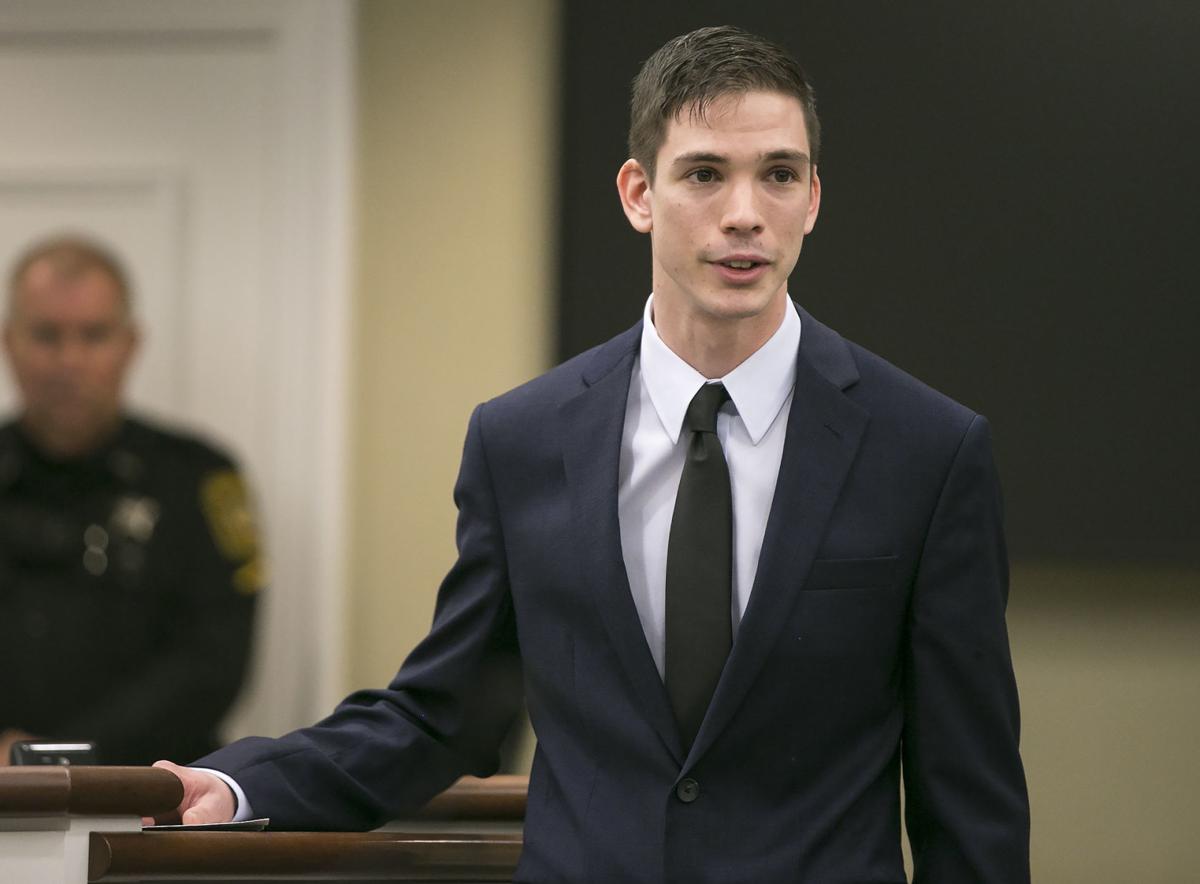 At his graduation, Antinori thanks all of those who supported him while he was going through the local Veterans Docket.

ABOVE: Navy veteran Liam Antinori (from left), his girlfriend Natalie Medina and mother Alana Antinori share a light moment after his graduation from the Rappahannock Veterans Docket at the Spotsylvania County Courthouse.

Liam Antinori’s girlfriend, Natalie Medina, gives the Navy veteran a hug after he graduated from a new court program that gives vets facing criminal charges a chance to get treatment instead.

At his graduation, Antinori thanks all of those who supported him while he was going through the local Veterans Docket.

When Liam Antinori first started coming to the mandated court appearances, he was a little intimidated by the crowd.

For a while, he was the only participant in the Rappahannock Veterans Docket, a Spotsylvania County program that offers intensive treatment to former service members in legal trouble.

Seated behind him were a dozen or more representatives from different agencies, ready to offer their services.

But that’s not how the 23-year-old Navy veteran saw it.

“From an addict’s mind, you feel like they’re all against you, they’re trying to catch you in a urinalysis, they’re out to get you,” Antinori said.

As time passed—the program lasts 18 months—Antinori came to realize those in the courtroom wanted him to succeed just as much as he did. On Thursday, when he became the program’s first graduate, he thanked a packed house in Courtroom 1 of Spotsylvania Circuit Court for the help.

“It’s been a bumpy ride, but it’s been a good ride,” said Antinori, who wore a coat and tie to his final court appearance. “I saw this court go from a place I was frightened of to a place of support.”

Those who helped establish the program in 2018 offered cake and punch, gifts and speeches and a surprise Antinori wasn’t expecting.

Antinori was facing two felony charges after a September 2017 incident in which he had picked up some friends after they committed robbery. He hoped the charges would be reduced to misdemeanors.

“Honestly, as long as I don’t have any felonies on my record, I’ll be fine,” he said two days before the graduation.

Commonwealth’s Attorney Travis Byrd decided to dismiss the charges altogether. When Judge Ricardo Rigual asked Antinori if he had any objections to that, a few people in the audience chuckled and Antinori answered: “No, your honor.”

Byrd was one of many officials who shook Antinori’s hand and congratulated him for sticking with the program. “It was an honor to be able to dismiss the charges against you,” the prosecutor told him.

‘WE ALL HAVE STRUGGLES’

Rigual worked with other officials from court, law enforcement and community-service agencies to create the Rappahannock Veterans Docket after the judge started seeing an alarming number of veterans in the courtroom, starting in 2013. In many cases, the men and women hadn’t been in trouble until their mid-20s, and Rigual wondered what had caused the change.

When he looked at the defendants’ reports, he saw the problem spelled out in all caps. Many had served in Iraq or Afghanistan and come home with PTSD, Post Traumatic Stress Disorder, or a TBI, Traumatic Brain Injury.

When their injuries led to self-medication, then addiction, then charges of domestic abuse or driving under the influence, it seemed the nation had turned its back on those who had served.

Rigual, a Marine veteran, didn’t want that to happen in his courtroom. He and Wendy Harris, Spotsylvania’s deputy public defender, and others throughout the region worked to form the program that’s called a docket because it’s not a separate court.

Those who sign a contract know they could get their charges reduced, or dismissed, if they complete 18 months of mandatory meetings, court appearances, drug screenings, counseling and treatment to overcome addiction.

Antinori had gotten a DUI while still in the Navy, which resulted in a dishonorable discharge. While in the court program, he went through the alcohol and substance abuse program, worked to get his license back and got help finding a better place to live so he didn’t fall into old habits. He also used his newly made contacts to find a job.

“It’s a very good network of people they have available,” Antinori said. “When you bring up a concern, they’re usually able to point to someone in the room you can talk to immediately. A lot of people, like myself, have a lot of things going.”

Bradley Grear, a program participant who also got substance-abuse treatment, said the program “is a humbling experience, but it’s really beneficial.”

While he was being treated at a Veterans Affairs facility, tests showed he had a bad aortic valve. He had open-heart surgery on Jan. 6, but came to Antinori’s graduation program to enjoy the festivities.

Like the four others in the program, he said he can’t wait to have cake in his honor.

“We all have struggles when we first start,” Grear said, “but they build us back up to where we need to be.”

Each veteran going through the program is assigned to a mentor. That person stands beside the veteran during court appearances and is available whenever the vet needs help.

Antitori’s mentor is Daniel Cortez, who served in Vietnam and has advocated for veterans. Even though their service was 50 years apart, the two men shared similar thoughts and experiences, Cortez said.

He served as a drill instructor in the Marines after Vietnam and said he instilled the lethal instincts the military requires. He also took lives and saw the impact of mortar shells and bullets on flesh and bone.

Many veterans struggle to deal with the “fog of war,” and some can never let it go, Cortez said. But through programs such as the Rappahannock Veterans Docket, former service members can get past the mistakes they made, he said.

On Thursday, Cortez presented the program a $10,000 check to help cover some of the court costs; the money came from a nonprofit fundraising group he heads called the National Vet Court Alliance. He wants to encourage other businesses and individuals to do the same.

“All the court members are here on their own dime and their own time,” he said. “Nobody funds this court.”

He and Rigual, Veterans Docket Administrator Kelly Hale, Stafford County Commonwealth’s Attorney Eric Olsen and state Sen. Bryce Reeves, R–Spotsylvania, are working with Washington officials to pass a bill that would provide funding for more programs nationwide. There are about 500 in the United States and seven in Virginia.

Antinori and Cortez will work to get Antinori’s discharge upgraded to an honorable one, and Antinori would like to use GI benefits to go to college. Or, he might go back into the service.

Whatever he chooses, he’d like to come back and visit the courtroom that once intimidated him so much.

“I want to show that none of you guys wasted your time in the last year,” he said.