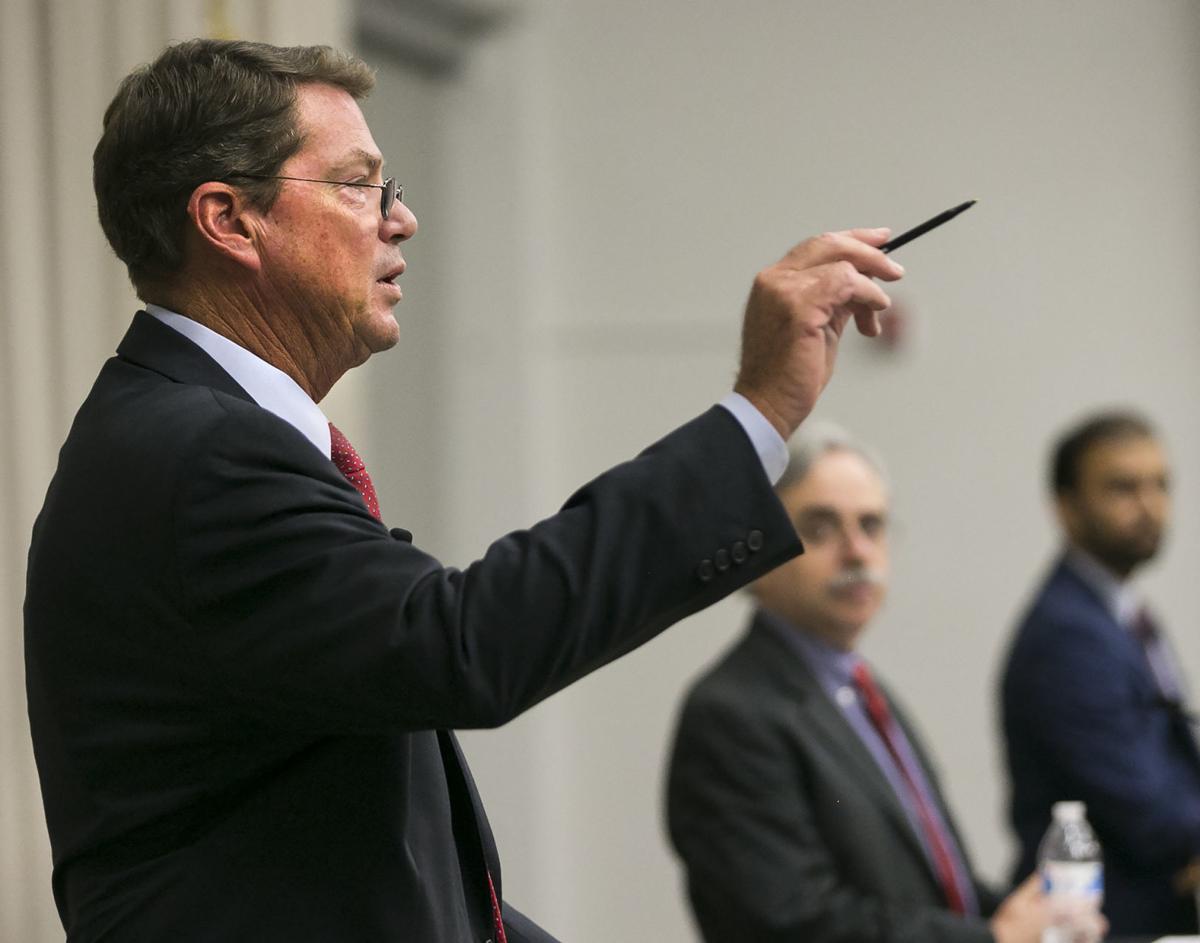 Senator Richard Stuart answers a question during a debate with Democratic candidate Qasim Rashid debate at the University of Mary Washington’s Stafford campus on Thursday, Sept. 5, 2019. 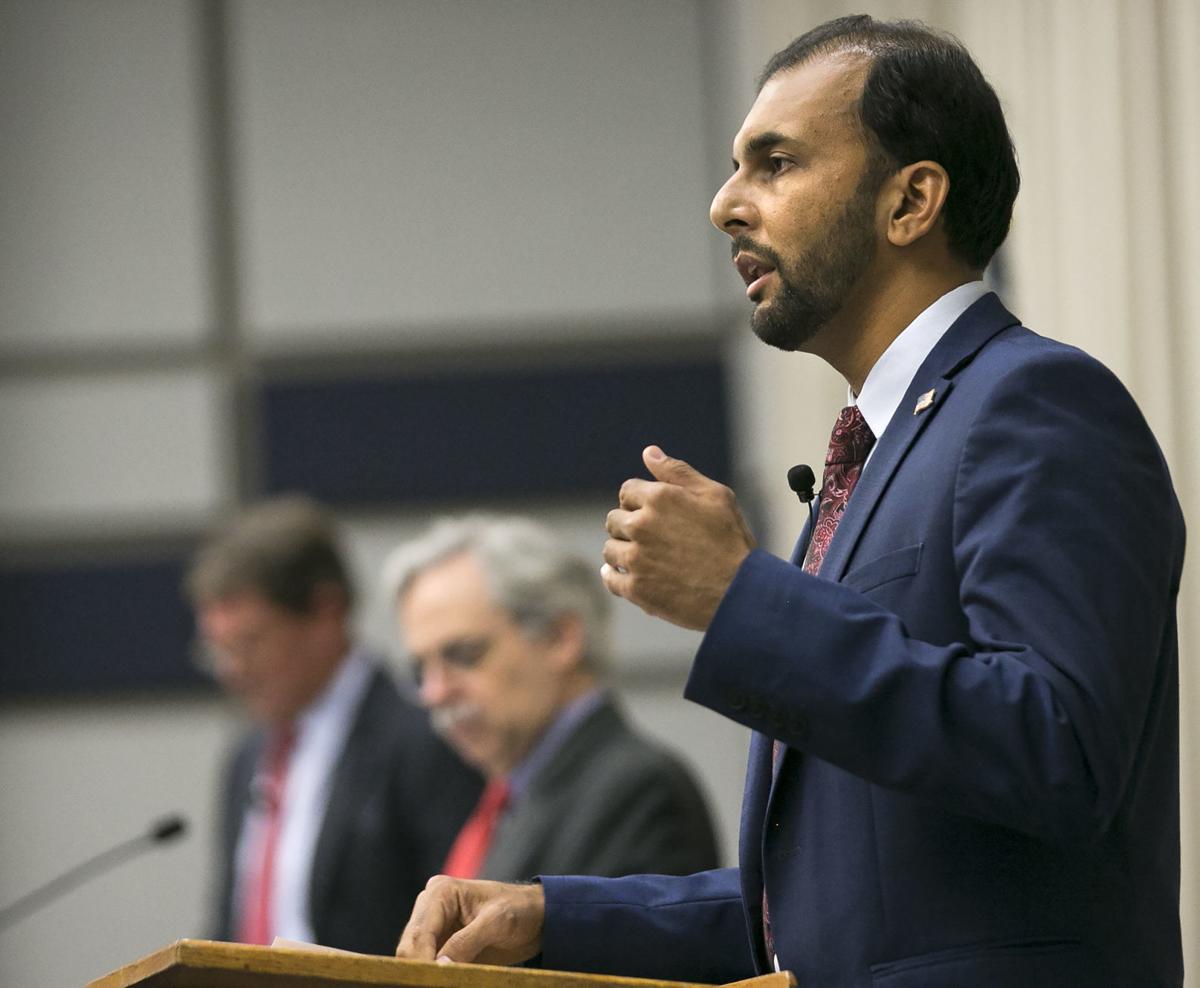 Democratic candidate Qasim Rashid answers a question during a debate with Senator Richard Stuart at the University of Mary Washington’s Stafford campus on Thursday, Sept. 5, 2019.

Senator Richard Stuart answers a question during a debate with Democratic candidate Qasim Rashid debate at the University of Mary Washington’s Stafford campus on Thursday, Sept. 5, 2019.

Democratic candidate Qasim Rashid answers a question during a debate with Senator Richard Stuart at the University of Mary Washington’s Stafford campus on Thursday, Sept. 5, 2019.

Rashid, a Democrat, writer and human rights attorney, squared off with Stuart on a variety of issues including transportation, equal rights, health care, guns, immigration, the minimum wage and student loan debt.

Stuart is a land use, local government and civil litigation attorney in private practice. Previously, he served as Westmoreland County’s commonwealth’s attorney. He was first elected as state senator in 2007 and is facing a Democratic challenger for the first time.

Thursday night’s debate was moderated by Stephen Farnsworth, director of the university’s Center for Leadership and Media Studies.

Regarding transportation woes in the region, Rashid pointed fingers Thursday night at years of Republican leadership and stated he will “not accept money from property builders” and would encourage telecommuting and incentivize employers to move to the area to reduce congestion on area roadways.

Stuart said he has proposed a plan in which the shoulders of Interstate 95 would be used as an additional travel lane during peak travel times. Stuart would also like to channel internet sales tax revenue to the transportation fund, rather than funneling those dollars into the general fund.

On guns, Stuart spoke about a bill he introduced that, unlike red flag laws, would create a statewide hotline to help reach an investigator with psychological experience who would reach out to individuals in need of care before they commit a crime.

Rashid replied, “To demonize those with mental illness is wrong,” adding, “We need comprehensive gun reform that respects the will of the people.”

The two differed on forgiveness of student loan debts. Saying 44.2 million Americans already owe over $1.5 trillion in student debt, Rashid cited $1.6 trillion given in the past as government bailouts as a reason for the government to forgive student debt.

“If the government can bail out corporations, they can certainly help the middle class,” Rashid said.

Stuart countered that the government doesn’t bail out corporations, rather, it is taxpayer money that is used to do so.

Regarding health care, Rashid said Stuart opposed expanding Medicaid coverage, while the Democrats have been working hard to expand coverage to more people.

Stuart said Obamacare has fueled an increase in costs. “We need to find a way to drive the cost of health care down for everyone so they can afford it,” he said.

Rashid said the General Assembly should raise the minimum wage and pass the Equal Rights Amendment. Stuart opposes government mandating wages and said he supports the ERA if an abortion-neutral clause is added. Both support efforts to end gerrymandering and control rising college tuition.

According to Rashid, his top campaign priorities are expanding health care access, ensuring schools and educators are funded effectively, and building out the transportation infrastructure to help eliminate traffic congestion in the area.

As for November’s election, both candidates feel confident of the outcome.

“Yes, yes, we will win,” said Rashid. “We are running a people-powered campaign, our policies are significantly better and more aligned with the people of Virginia and Americans in general, and we are running a robust dignified, honorable campaign.”

“I feel very confident that I have worked hard over my tenure in the Senate,” said Stuart. “I’ve been responsive to the people in the district and I feel very good about our campaign.”

Full video coverage of the debate.

Clearly one wants to give away freebies, while the other is a realist.

There are no "freebies", someone pays.

"Clearly one wants to give away freebies". Yep, to corporations and the wealthy. Can't even post to Stuart's FB page...........I think that is illegal. Plus, he represents those jerks who are developing Fones Cliffs................yuck

Virginia, worst state in the country for workers..........second year in a row and not a close contest