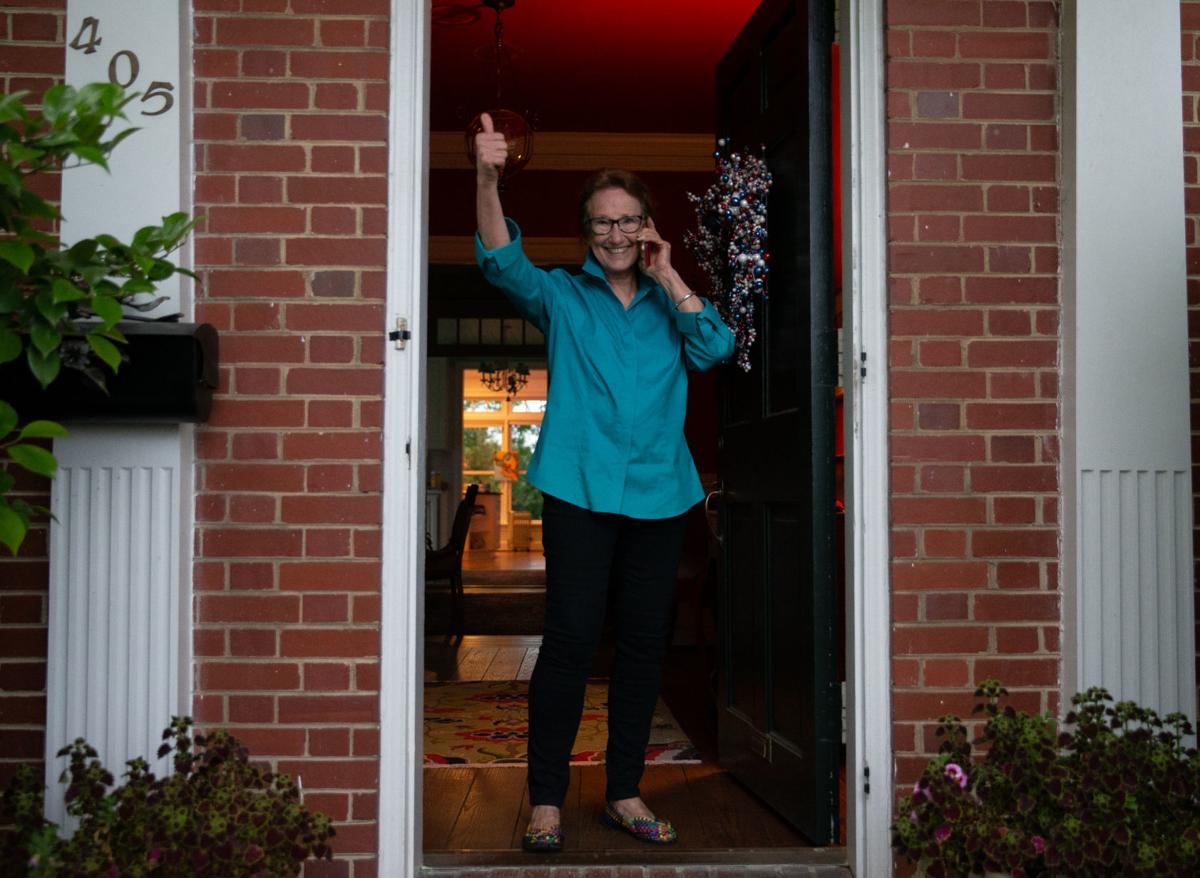 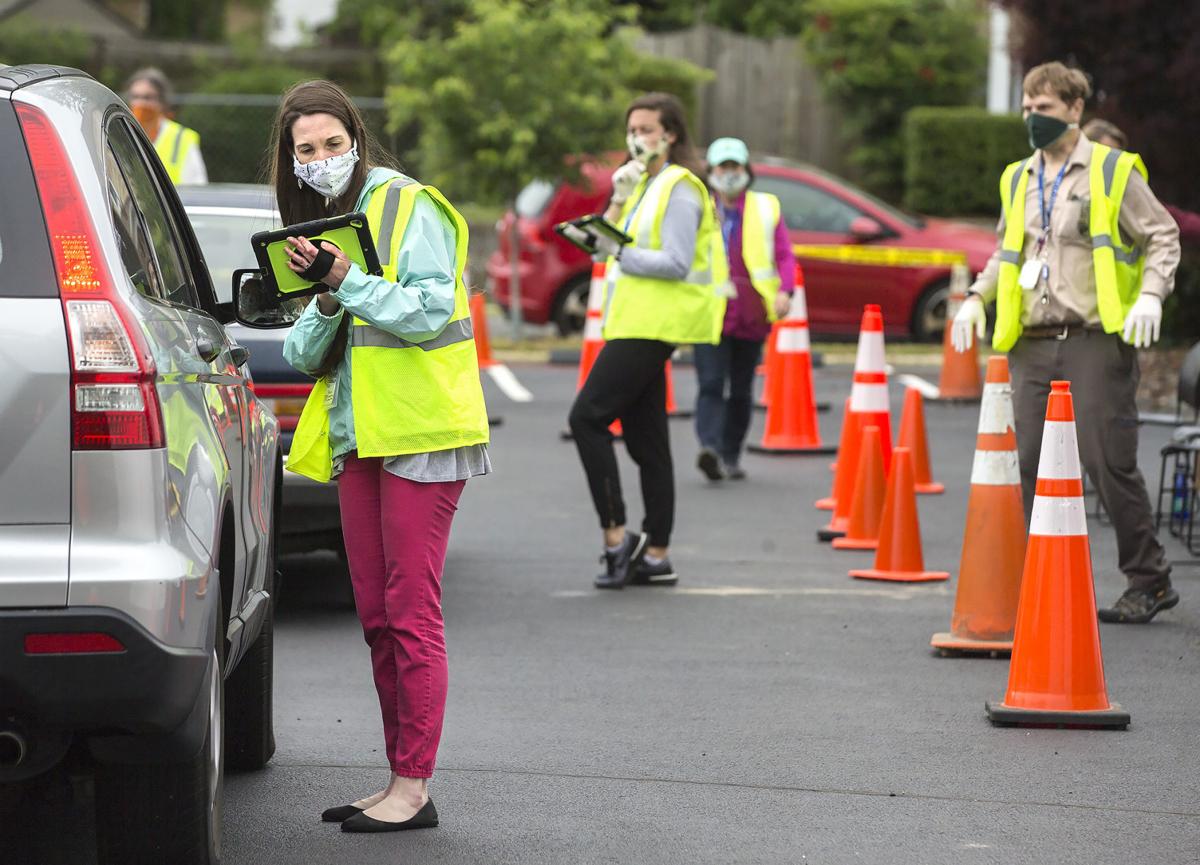 Election official Jincy Brown (left) collects information from a voter at the drive-thru voting precinct at Dorothy Hart Community Center. Due to the novel coronavirus, the community center was the only polling station in the city.

Election official Jincy Brown (left) collects information from a voter at the drive-thru voting precinct at Dorothy Hart Community Center. Due to the novel coronavirus, the community center was the only polling station in the city.

Fredericksburg’s voters returned all three incumbents to City Council in an election Tuesday that was mostly done by absentee voting.

Mayor Mary Katherine Greenlaw won her bid for a third term, beating challenger Anne Little 1,650 votes to 1,190. There were only nine write-in votes.

“I’m very grateful first for our citizens for coming out to vote in this extraordinary election under very unusual circumstances, but most of all I am grateful for their support and I pledge to do my very best for the city,” Greenlaw said while holding an online video celebration with her campaign staff.

The two other City Council incumbents up for election held on to their at-large seats. Kerry Devine received 1,759 votes, and Matt Kelly received 1,575. Jon Gerlach, a former Fredericksburg Architectural Review Board chairman, garnered 1,503 votes in his first bid for a seat on the council, and there were 23 write-in votes.

Greenlaw praised the Fredericksburg Voter Registrar’s office and the city’s Electoral Board for conducting a safe and efficient election under difficult circumstances. This year the voting precincts were consolidated, with more than 2,100 absentee ballots counted at a centralized absentee precinct in Executive Plaza. In-person voting was available only at the Dorothy Hart Community Center, where drive-thru and walk-in voting were allowed.

“The city owes them a great debt, and they have set a model for other areas of the state if they have to do drive-thru voting,” Greenlaw said. “It was extremely well handled.”

Greenlaw said she plans to work with council members and city staff to meet the challenges that Fredericksburg is facing due to the COVID-19 pandemic, and with the School Board on school capacity needs. She said she hopes to see City Council’s 2036 Vision for the city fulfilled.

Little conceded as soon as the votes were counted.

“I want to congratulate Mary Katherine on her campaign, and I wish her well over the next four years,” she said. “I also want to applaud the city of Fredericksburg for a tremendous election turnout during a very difficult election campaign year. We are all stronger when we all vote and pay attention to the issues in our city.”

She noted that campaigning was difficult this year due to the stay-at-home order. Not only were forums canceled, but candidates also had to stop going door-to-door. Little said she was still able to raise some issues that she thinks are important, such as school capacity needs, taxes and the inclusion of the electorate in decisions affecting the city.

After finishing first in the race for the two at-large council seats, Devine said she is excited to continue working for the city and appreciated everyone’s hard work and support.

“I do want to congratulate Kerry for her win and Jon Gerlach for running a good campaign and, frankly, making it a tight race,” Kelly said. “Obviously what he said in his campaign resonated and it’s something we need to consider as we move forward.”

Kelly said he isn’t planning to run again, and is glad someone like Gerlach is waiting in the wings. He added that he hopes Gerlach, who serves on multiple civic committees and community boards, including the Architectural Review Board and the Fredericksburg NAACP, will continue to stay involved with the city.

“Both Kerry and Matt ran excellent campaigns and the voters made their choice to retain the current leadership on City Council,” said Gerlach, an attorney and retired archaeologist. “I am grateful for the support and encouragement from so many in the Fredericksburg community. I do not regret running in this race, even with this outcome. I am dedicated to serving the city.”

Like the others, he complimented Voter Registrar Marc Hoffman, the Electoral Board, staff and volunteers for running a smooth election during a difficult time.

Jarvis Bailey and Jannan Holmes also won re-election to their at-large seats on the city’s School Board. They ran unopposed.