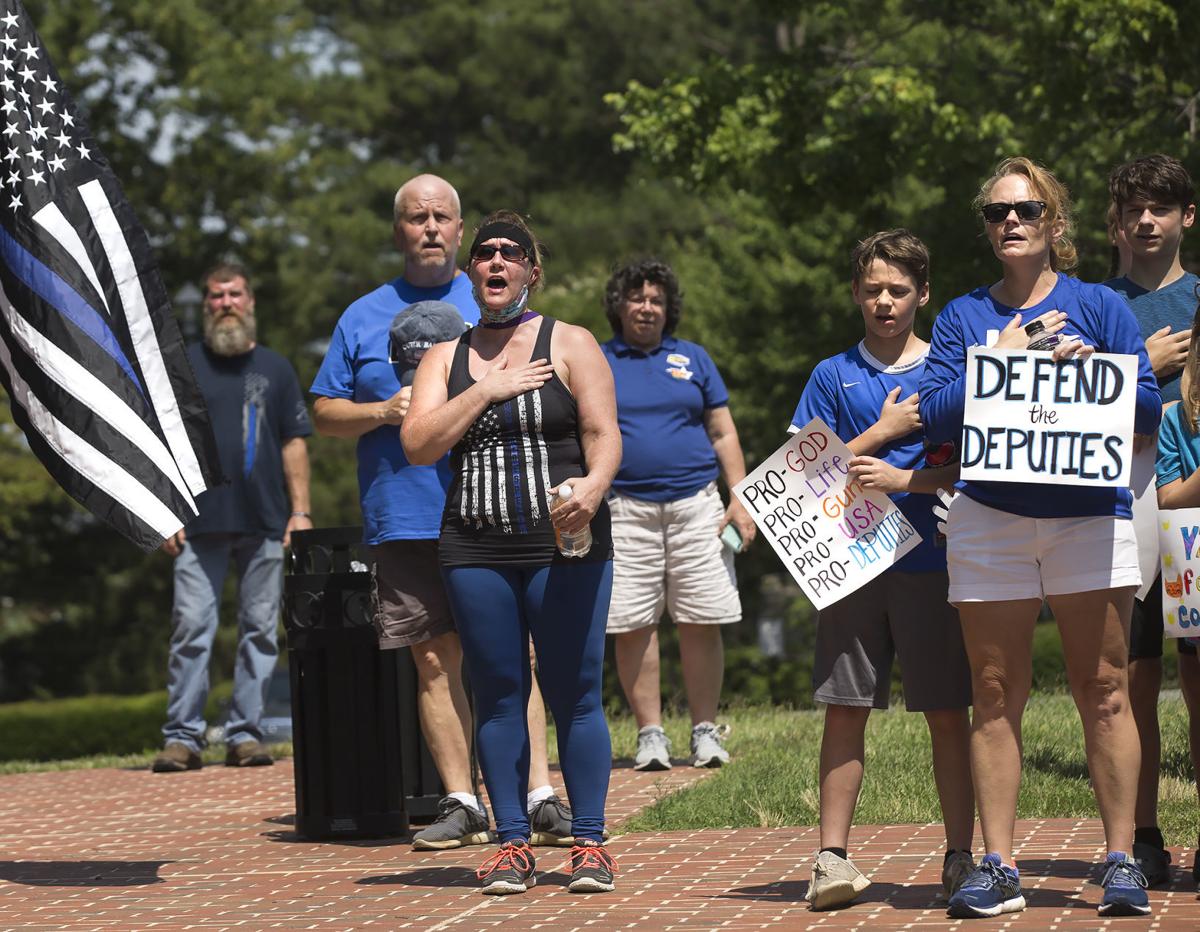 Attendees of the demonstration sing the national anthem. Saturday’s rally included a march and several speakers. 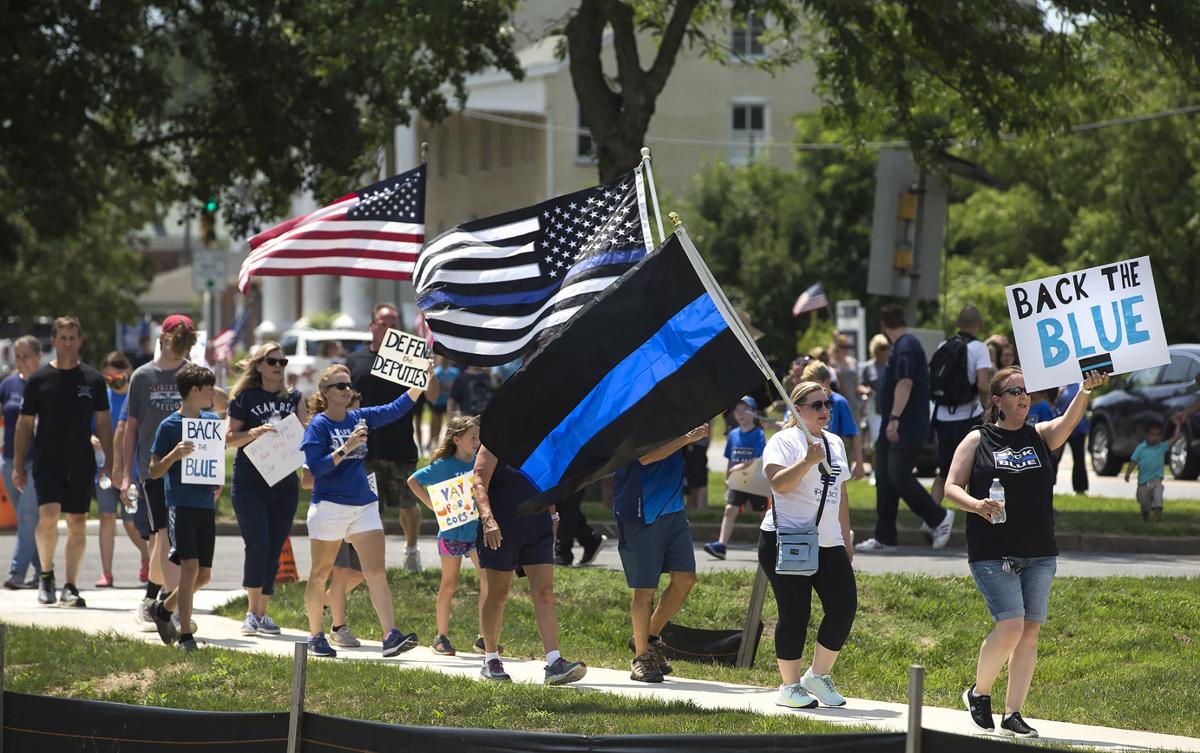 Law enforcement supporters march near Spotsylvania County Courthouse during a Back the Blue rally on Saturday. 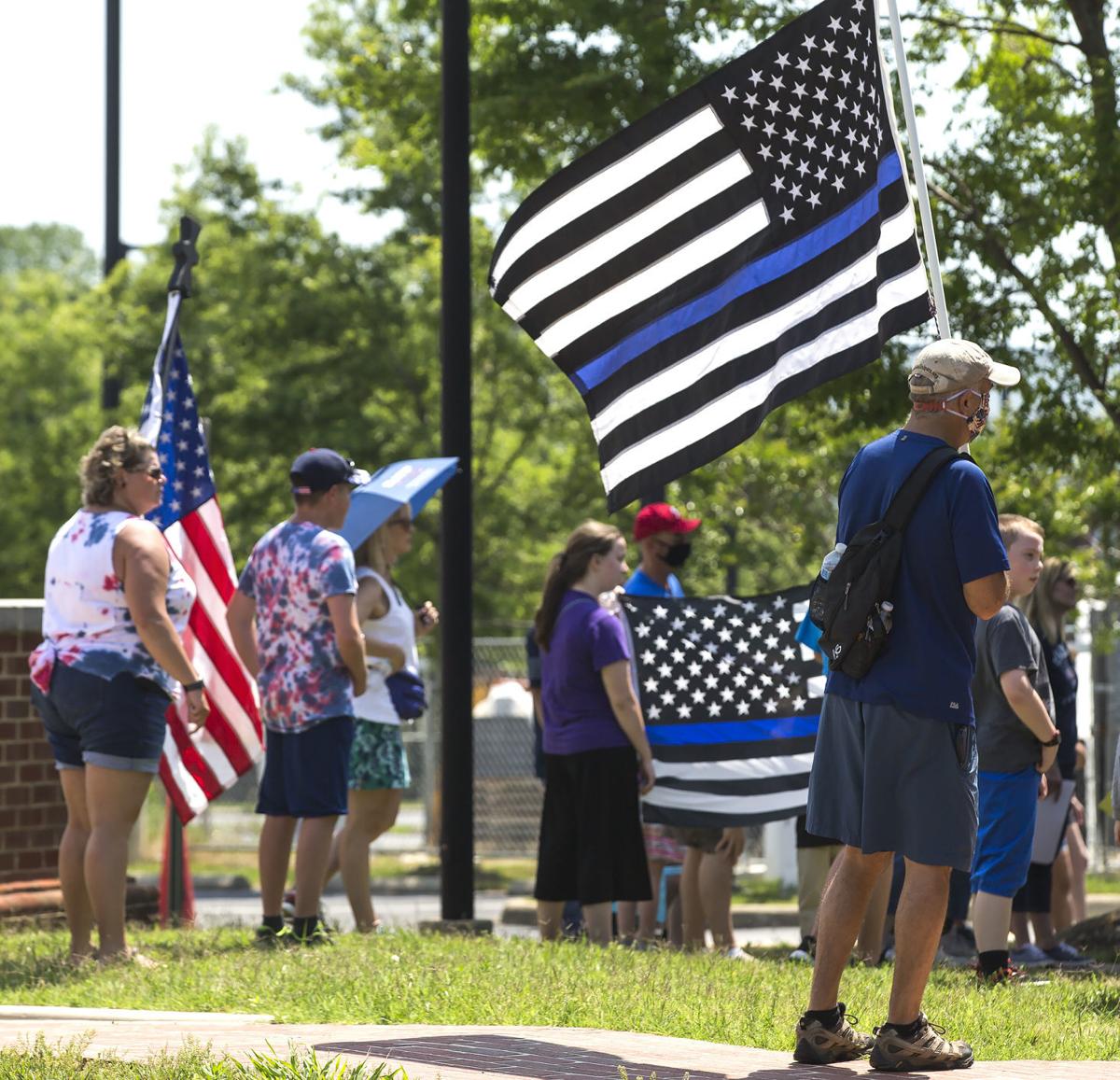 Attendees, many with flags, listen to speakers at the rally, held to support law enforcement officers. 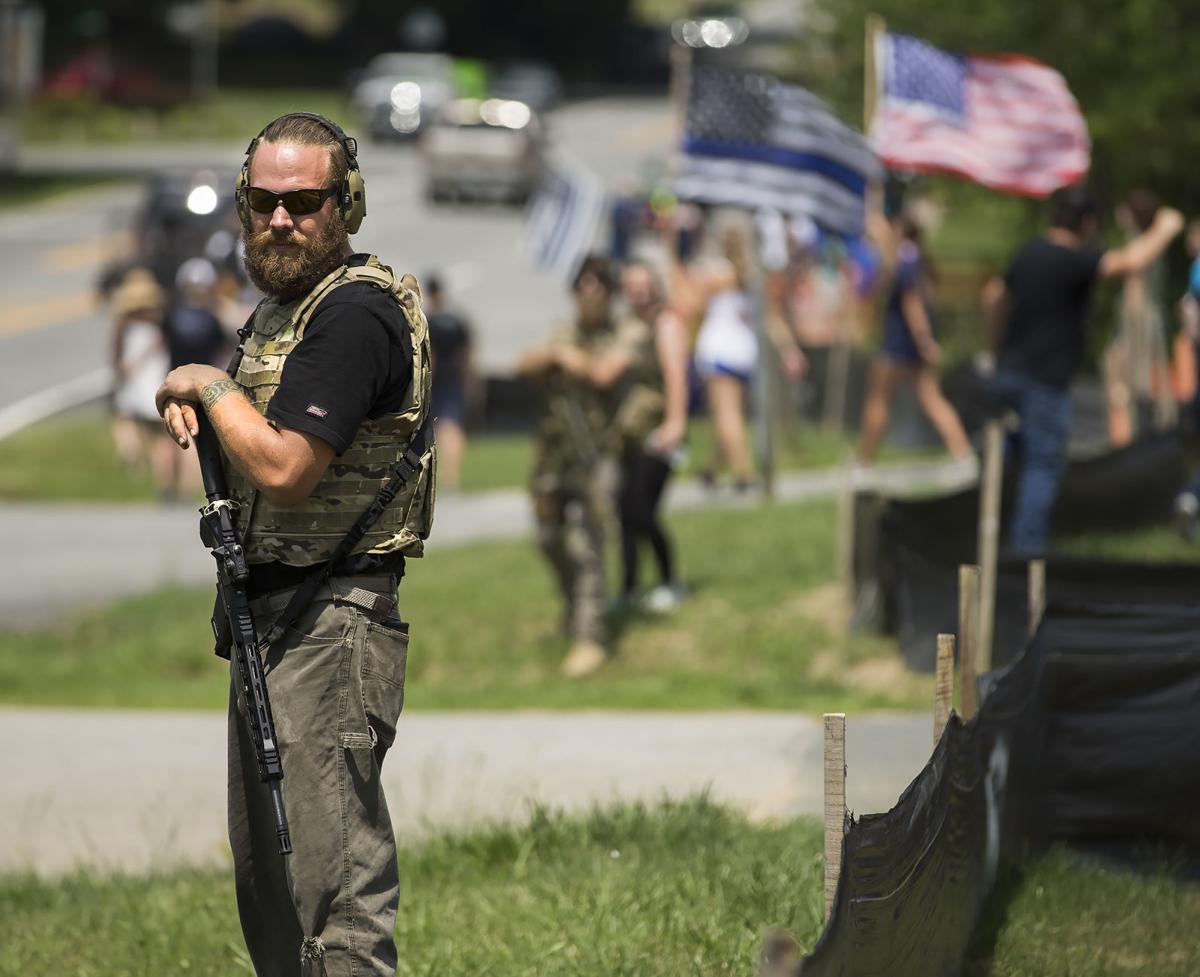 An armed man said he came to the Back the Blue rally in Spotsylvania County on Saturday morning to protect the demonstrators from potential harm.

Attendees of the demonstration sing the national anthem. Saturday’s rally included a march and several speakers.

Law enforcement supporters march near Spotsylvania County Courthouse during a Back the Blue rally on Saturday.

Attendees, many with flags, listen to speakers at the rally, held to support law enforcement officers.

An armed man said he came to the Back the Blue rally in Spotsylvania County on Saturday morning to protect the demonstrators from potential harm.

Chanting “Back the Blue” and “I’ve got your six,” more than 100 people marched along the sidewalks from Robert E. Lee Elementary School to Spotsylvania County’s General District Court on Saturday morning.

Many wore Back the Blue T-shirts in honor of National Law Enforcement Appreciation Day and hoisted signs with the slogans. Several carried American flags, and a couple of children sported blue hair in honor of police officer’s blue uniforms.

Cars passing by along Brock Road honked their horns in support, and the light traffic along Courthouse Road stopped to let the marchers cross the street.

Katie Rasmussen, whose husband is a police officer, said she reached out to several officers’ wives to organize the event for National Law Enforcement Day. She said she’s heartbroken over the lack of support for the police since George Floyd’s death on May 25 in Minneapolis and protesters’ calls to defund the police.

“My husband, along with all of his co-workers, put their lives on the line every single day and are being persecuted for a job they hold, instead of the people they are, which is upstanding,” she said in an interview Friday. “We owe it to our men and women in blue to show them they are not alone, not everyone has abandoned them, and we believe in ‘defend not defund.’ Our country needs law and order to function and we support those who keep it.”

The event included a stop at the side of the courthouse for a short program. Kirk Russell, a member of Grace Fellowship Church, said a prayer, which was followed by the singing of the national anthem. Then, Rasmussen and fellow organizer Crystal Cabrera each gave a short speech about police officers and the important role they play.

“Think about 9/11,” Rasmussen said. “They repeatedly ran into disaster and fear multiple times to save people, and most did not come back out. Those are the people I want protecting our streets. We know many of our officers are good men and women. They are upstanding. They have values, and they genuinely want to make a difference. We need your feet standing behind them and showing them the support they deserve.”

Cabrera said the community needs to understand police officers are husbands and fathers, wives and mothers, brothers and sisters.

“The weight of the badge is so small until you have to put it on,” she said. “We’re here to back them, that we understand and we appreciate them more than they could know.”

The two women then invited anyone in the crowd to come forward if they wanted to speak. A number did without giving their names.

One woman related how her grandson, who has allergies and suffers from asthma, stopped breathing. She called 911 and her husband. By the time her husband got there, an officer had administered CPR and saved her grandson’s life.

A father said when his son was young, he had a sleep apnea problem that they were unaware of, and started sleep walking. One night, his son managed to crawl out the dog door, cross State Route 3 and make it almost to Wegmans before police found him. They notified the family and hooked his son up with a program that treats people with memory problems.

“We had a radio dispatch any time he got out of the house so we would know it,” he said. “These are examples of how police prevent bad things from happening.”

Two people spoke out in favor of School Resource Officers, which some protesters in Fredericksburg have said they’d like to see removed from schools. One, who identified herself as a Spotsylvania County teacher, praised Deputy Frank Fleming, saying that he gets involved with her school, sits down and talks to students and that they often seek him out to get his opinion.

“I’m so glad that we have a Deputy Fleming in every single school, and we need to keep it that way,” she said. “The way we do that is we get people in office who agree with us.”

Another speaker was a man who paraphrased Edmund Burke’s famous quote that “the only thing necessary for the triumph of evil is for good men to do nothing” to urge people to express their views to their School Board.

“We truly are in a cultural war,” he said. “There are a lot of good people in the county, but if we sit back, I’m not talking about violence or anything like that, that’s the last resort, but get involved. I’m glad to have those deputies.”

Another woman encouraged everyone to look for good stories about police officers on Facebook, such as when they save people or deliver babies, and share them.

“Don’t get involved with bickering back and forth,” she said. “That just wastes your energy and wastes your time and doesn’t help anybody. Share, that’s what you need to do.”

Anne Hart of Law Enforcement United’s Team Fredericksburg didn’t take part in the march, but stood along the route to offer bottles of cold water to those who did. LEU’s mission is to honor law enforcement officers who have died in the line of duty and their survivors. She said her team wanted to show its support for law enforcement since they’re going through a difficult time.

As the marchers headed back to their cars, Rasmussen said the turnout was about a third of what she’d been expecting. She said some decided not to attend due to fears of COVID-19 and concerns about Black Lives Matters protesters. A couple of armed men did stand along the route. One, who declined to give his name, said that he’s a Virginia Militia member and wanted to make sure the marchers were safe.

Rasmussen said Saturday’s march wasn’t intended to take anything away from the BLM protests, and was designed to be peaceful and give everyone a chance to be heard.

“We just want the police to know that we have their back,” she said. “Everybody that we had was excited to be here.”