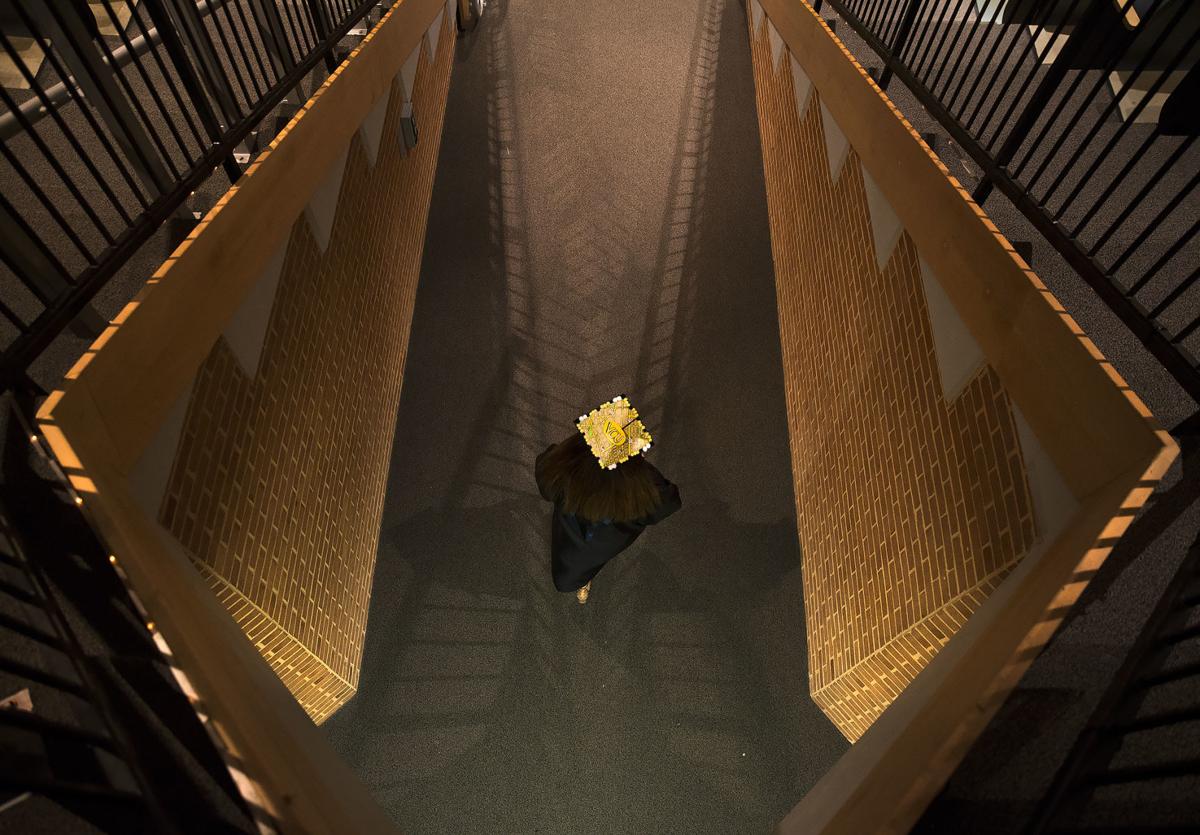 A Massaponax High School graduate enters the school’s auditorium during the class of 2020’s commencement ceremony. Due to the novel coronavirus, students were required to sign up for a specific time of day to take the stage. 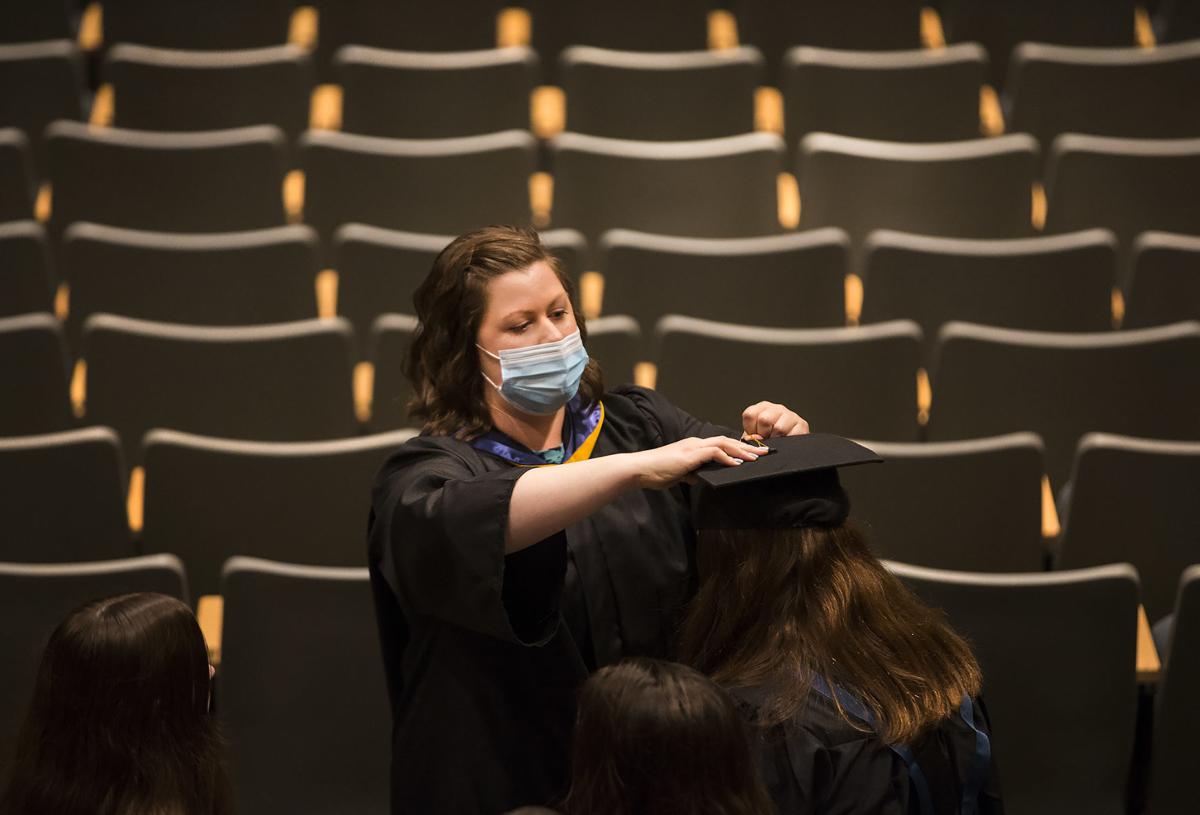 Massaponax High School math teacher Denise Glassford adjusts a tassel for a 2020 graduate during commencement at the Spotsylvania County School on Wednesday, May 20, 2020. 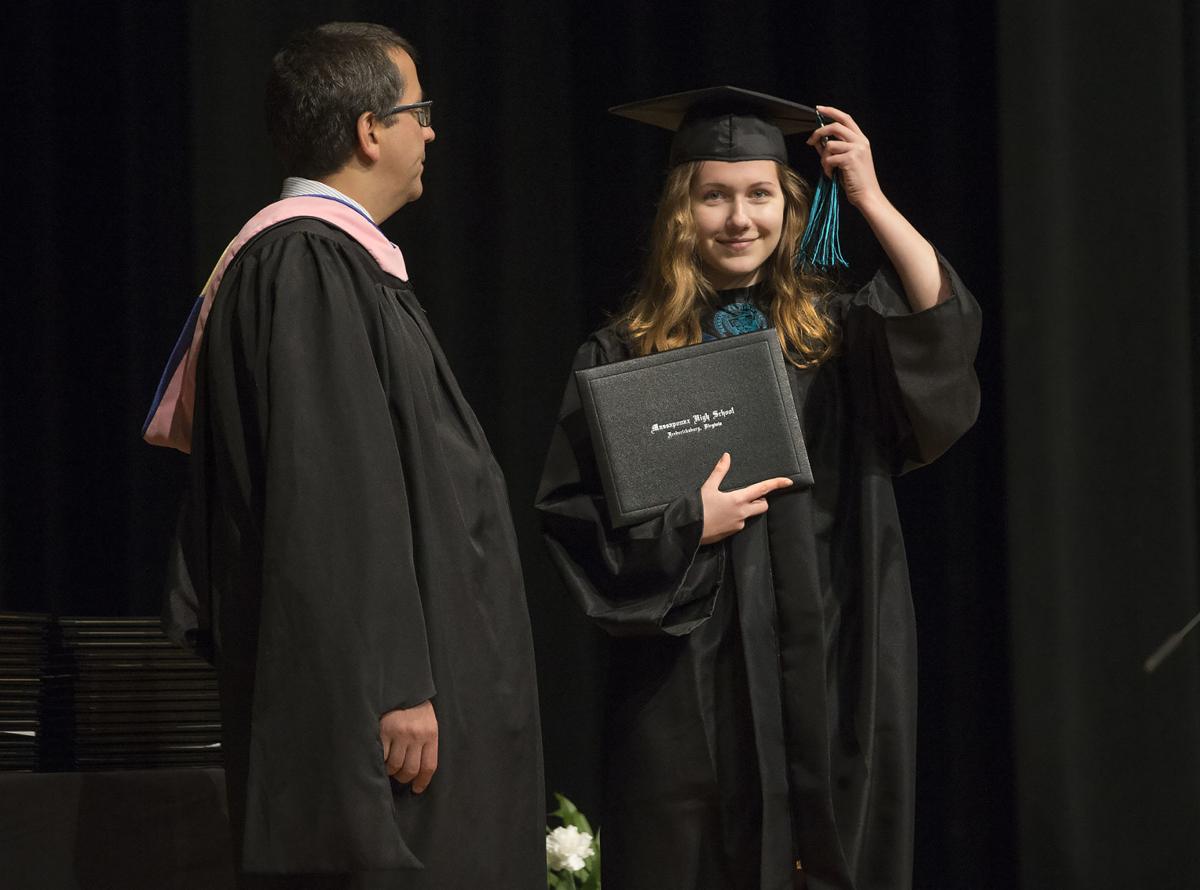 Lily Walker, 16, the youngest 2020 graduate of Massaponax, flips her tassel after crossing the stage and being congratulated by Principal Joseph Gabalski. 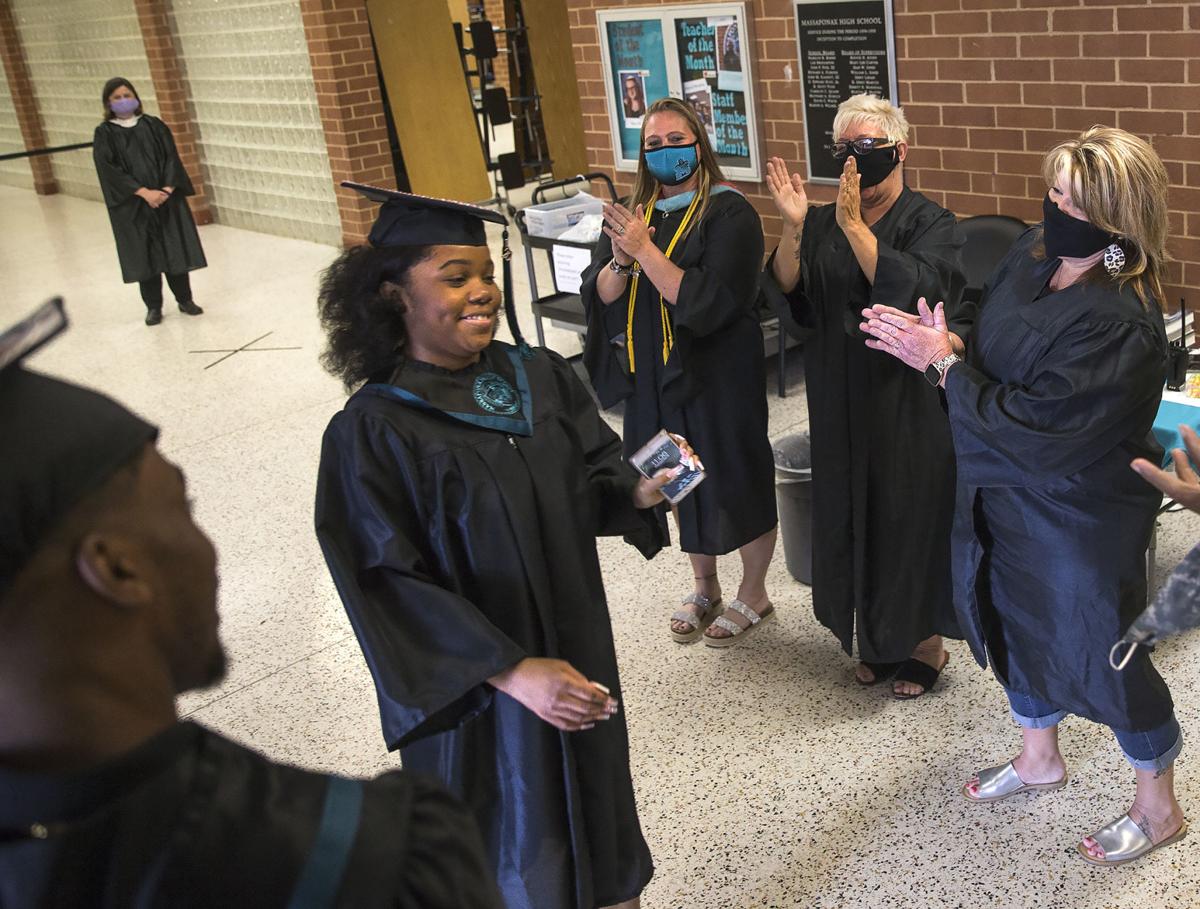 A Massaponax High School graduate enters the school’s auditorium during the class of 2020’s commencement ceremony. Due to the novel coronavirus, students were required to sign up for a specific time of day to take the stage.

Massaponax High School math teacher Denise Glassford adjusts a tassel for a 2020 graduate during commencement at the Spotsylvania County School on Wednesday, May 20, 2020.

Lily Walker, 16, the youngest 2020 graduate of Massaponax, flips her tassel after crossing the stage and being congratulated by Principal Joseph Gabalski.

"You get your own personal graduation," Oneal said, panning her smartphone from left to right to capture the largely empty room. "This is something different. This is 2020."

Warford's family—all six of them, most wearing masks as well as bedazzled shirts proclaiming their relationship to the graduate—got front-row seats to watch her cross the stage, receive her diploma, greet Principal Joseph Gabalski and move the tassel from the right to the left side of her cap.

They clapped, shouted and blew noisemakers as Warford smiled and posed for pictures.

Gabalski, Assistant Principal Brian Dunleavy and the handful of Massaponax High School teachers who were present to help maintain social distancing and facilitate the smooth flow of graduates also clapped—but much of the sound in the auditorium came from a piped-in applause track.

"It's a sound effect," said math teacher Denise Glassford, who was there to welcome each graduate and family as they entered the auditorium and to make sure tassels were securely attached to caps. "It makes it sound a little grander."

The Spotsylvania County school system is holding social distancing graduation events for 1,700 seniors during the final two weeks of May. Massaponax graduated about 375 of its 402 seniors over three days, Gabalski said.

Each senior signed up for a half-hour time slot, during which they arrived at the school with their families, moved through the quick ceremony in the auditorium and then had the opportunity to pose for individual and family portraits in the hall.

School staff members ensured that each family group was separated by at least six feet and that there were no more than 10 people in a group.

"There's no shaking hands," Gabalski said with a sigh. "We're following the rules."

Gabalski said the school division hoped to be able to hold traditional graduations, but it didn't appear that would be possible anytime soon.

"We have some kids, like those who are going into the military, who are starting to leave town already and we just felt we had to do something for them," Gabalski said.

All other local school divisions are holding similar social distancing graduations for their seniors, with the exception of Stafford County, which has scheduled a group graduation in August.

Massaponax's graduations looked and felt different from traditional graduations, but Gabalski said parents seemed to like them.

"I had some parents ask if we could do it like this all the time," he said. "It's more personalized. And they like the multiple photo ops."

Others, such as the grandfather of one graduate who stayed in the back of the auditorium and muttered, "Isn't this a shame?" weren't happy with the arrangement.

"It could have been a little longer," said graduate Jayden Woods.

His mom, Patrice Stewart, said she thought all the kids who signed up for the 11 a.m. time slot would be graduating together, so the groups would be at least a little bigger.

"But I'm glad they did something for the graduates," she said.

Oneal said she was just happy to be able to celebrate her daughter's accomplishment.

She held out her daughter's cap, which Warford had decorated with a phrase written in glitter—"A dream deferred is a dream denied."