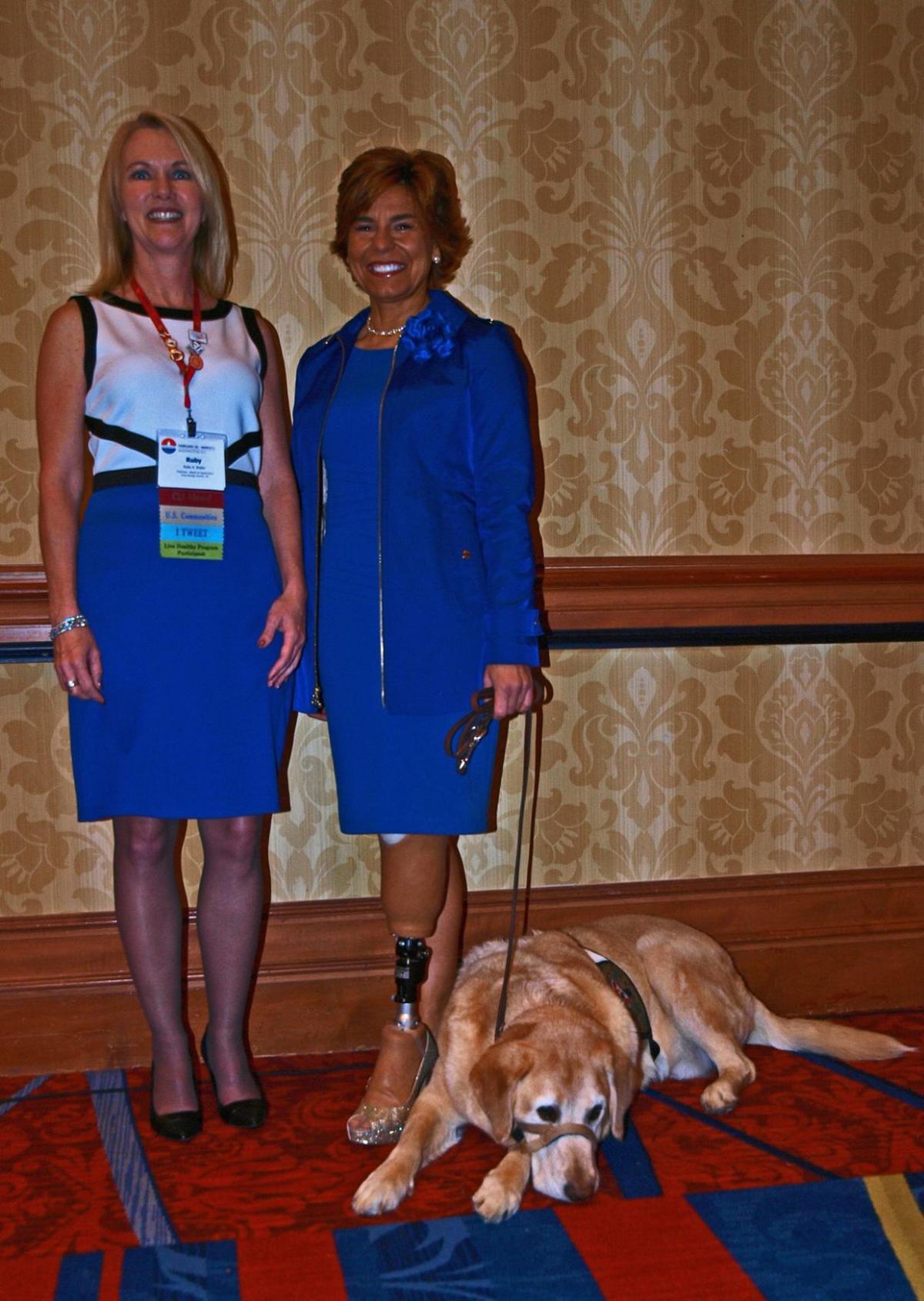 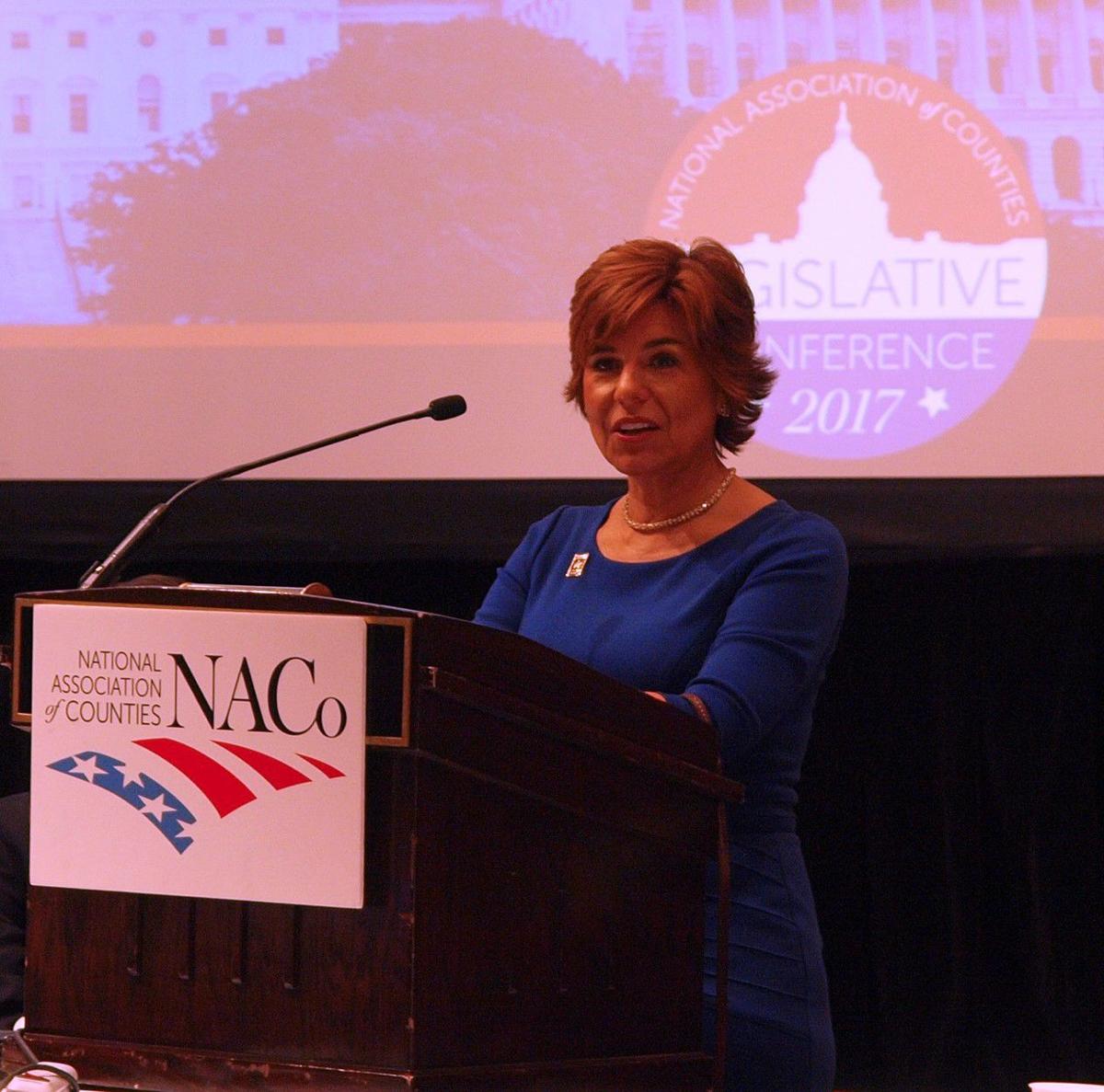 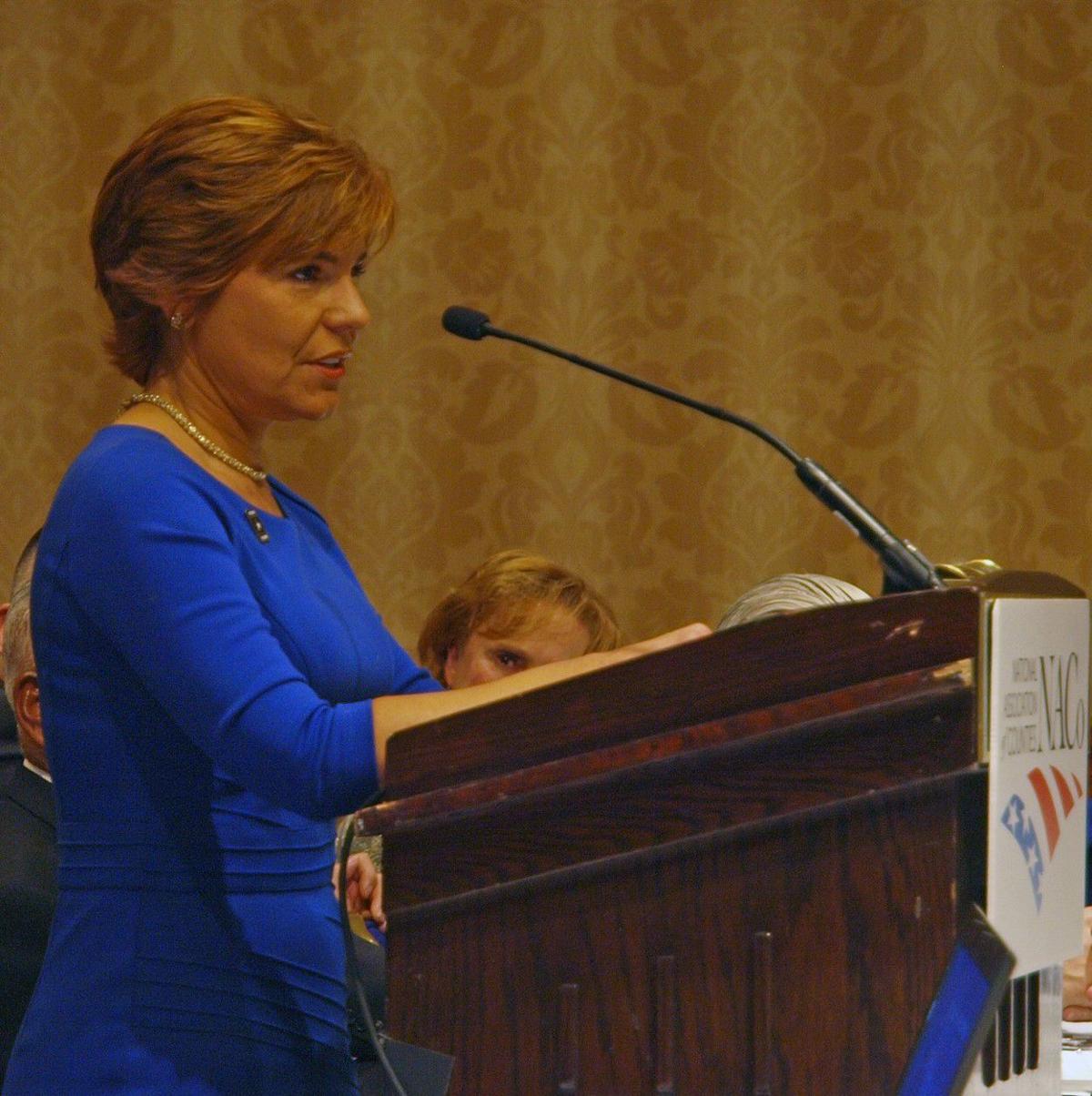 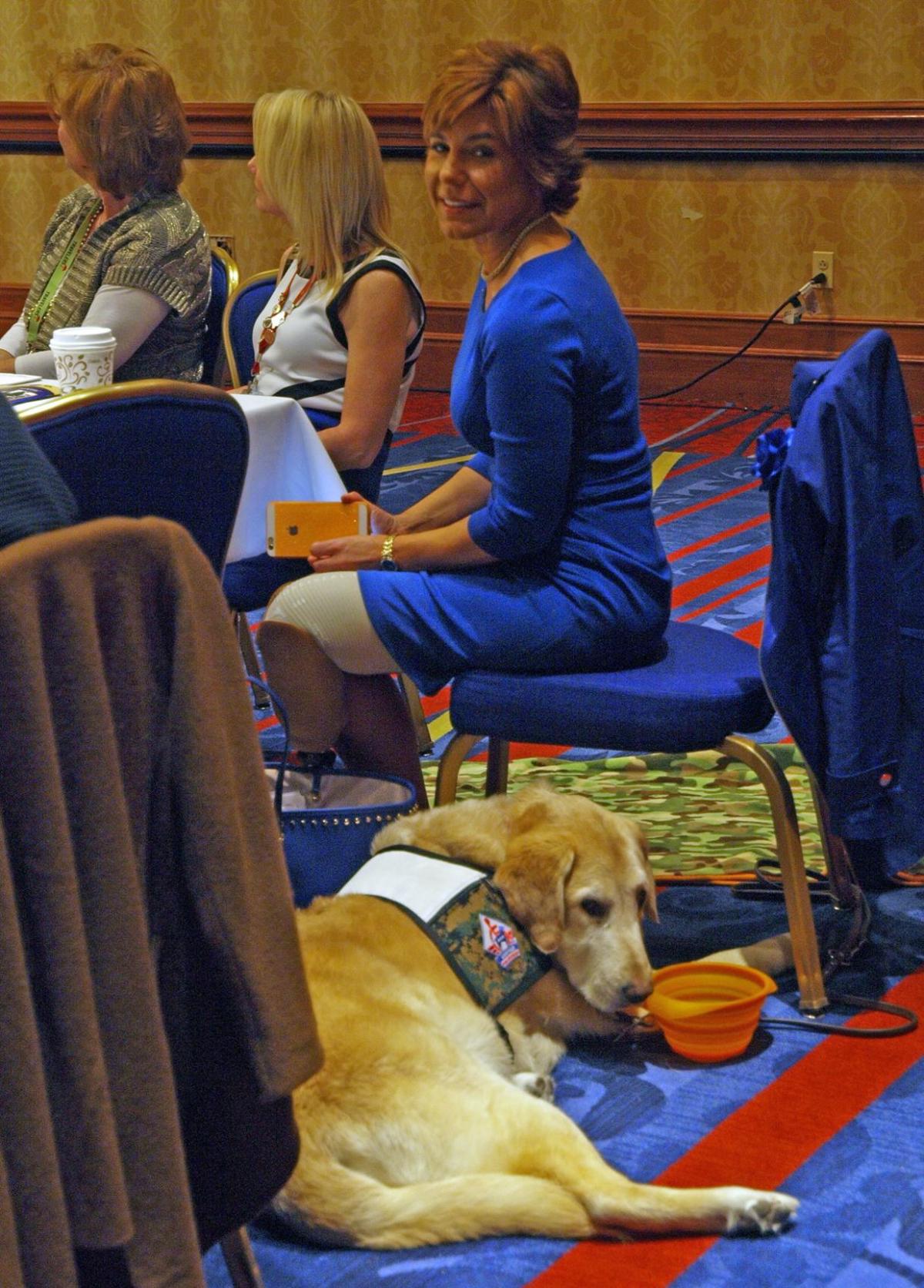 Smith, with her service dog, Isaac, addressed the Veteran and Military Service Committee at NACo. 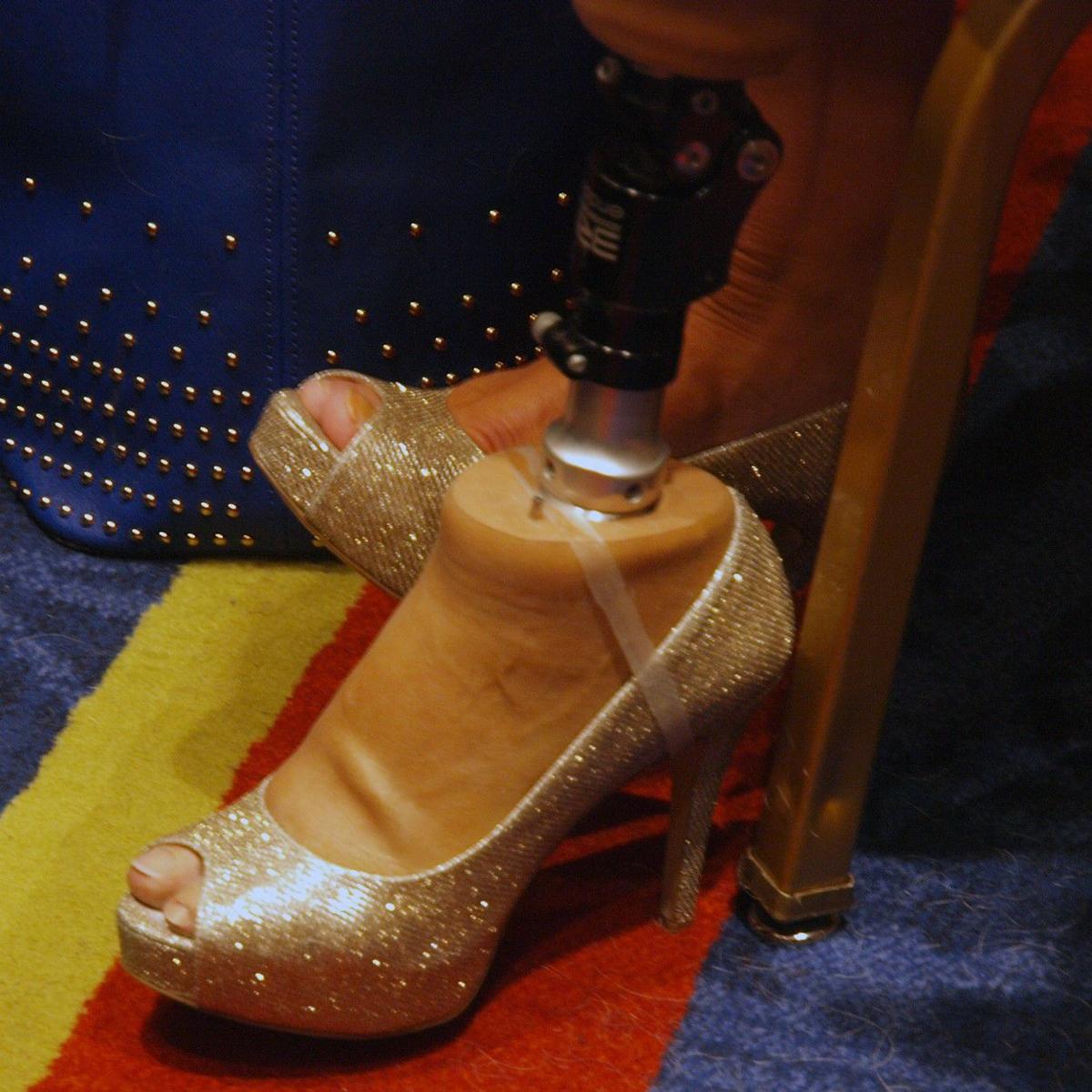 Her new foot is a step up from the Flintstone foot.

Smith, with her service dog, Isaac, addressed the Veteran and Military Service Committee at NACo.

Her new foot is a step up from the Flintstone foot.

Many attendees dabbed at their eyes during a King George veteran’s address to the Veteran and Military Service Committee at the National Association of Counties.

Standing in a pair of sparkling gold open toe heels, retired Army Capt. Leslie Nicole Smith relayed a message of hope and healing for all wounded warriors as she stressed the importance of networking and community interaction.

While serving with the 29th Infantry in Bosnia in 2001, Smith suffered a blood clot and complications resulting from exposure to a chemical agent or toxin. She was immediately redeployed to Walter Reed Army Medical Center two weeks before the end of her tour.

By the time she arrived stateside, her condition had deteriorated, and her very survival was in question. Smith pulled through but lost her left leg below the knee and eventually spontaneously lost her vision, first in one eye and then the other.

Smith was introduced at the Feb. 26 event by friend, neighbor, King George County Supervisor and vice chair of the committee, Ruby Brabo.

The supervisor, who is married to a soldier, has a keen understanding of military life.

Brabo told the audience that she went up and introduced herself as Smith walked down the street with her Canines for Veterans Service Dog, Isaac, saying she was “proud to call Leslie a friend.” She helped build a local network of neighborhood support within Smith’s community.

Before Smith related her story of going from the brink of death to her “new normal,” she emphasized that it was through efforts of the attendees, the committee specifically, and NACo as a whole that ill and injured warriors, caregivers, and their families are able to make positive differences and change lives for the better.

The retired soldier told the crowd that it is sometimes difficult for veterans to reach out to ask for help, but they need people to build a network of support, “Like Ruby had done for me.”

Smith said it is essential “to create that strong network, to lay the necessary groundwork, to build solid foundations, and to understand the need for military and veterans and how to help them overcome any challenges that they may face.”

Personal experience has taught Smith that veterans have a tendency to not ask for help.

“I think it’s because we don’t like to be seen as weak or that we can’t figure something out, in a sense that we couldn’t complete the mission,” said Smith.

She told the committee that it is essential to make use of all resources including military, social, and even church groups to reach out and help veterans and suggested that counties host events for veterans in order to be able to identify those residing in the area.

The crowd laughed along with Smith as she told them of the trials of going from her first prosthesis, that she described as resembling the foot cartoon character Fred Flintstone used to drive his prehistoric vehicle, to having the military design a more delicate foot that could wear high heels.

Smith said she had some interesting reactions and thoughts as she went through her medical ordeal. She laughed saying that some of the first things she was concerned about was how she would put on her makeup or fix her hair.

But it was exactly these things that helped forge the way for those who followed as it brought the military an understanding that women had different needs and considerations than their male counterparts. She was also one of the first military personnel to sustain the type of injuries that became more commonplace as soldiers returned from the Iraq War.

It was through her personal journey with the pitfalls of navigating through loneliness, depression and acceptance of her new normal that she has been able to hit home with her message.

She has continued to reach out to help others and advocates for support of wounded, ill and injured veterans, including those suffering from post-traumatic stress disorder and traumatic brain injury.

The retired Army captain serves as a spokesperson for a number of veterans organizations including the Gary Sinise Foundation, Canines for Veterans, American Veterans Disabled for Life memorial, and Fisher House Foundation to name just a few.

Additional information on the NACo organization may be found at NACO.org