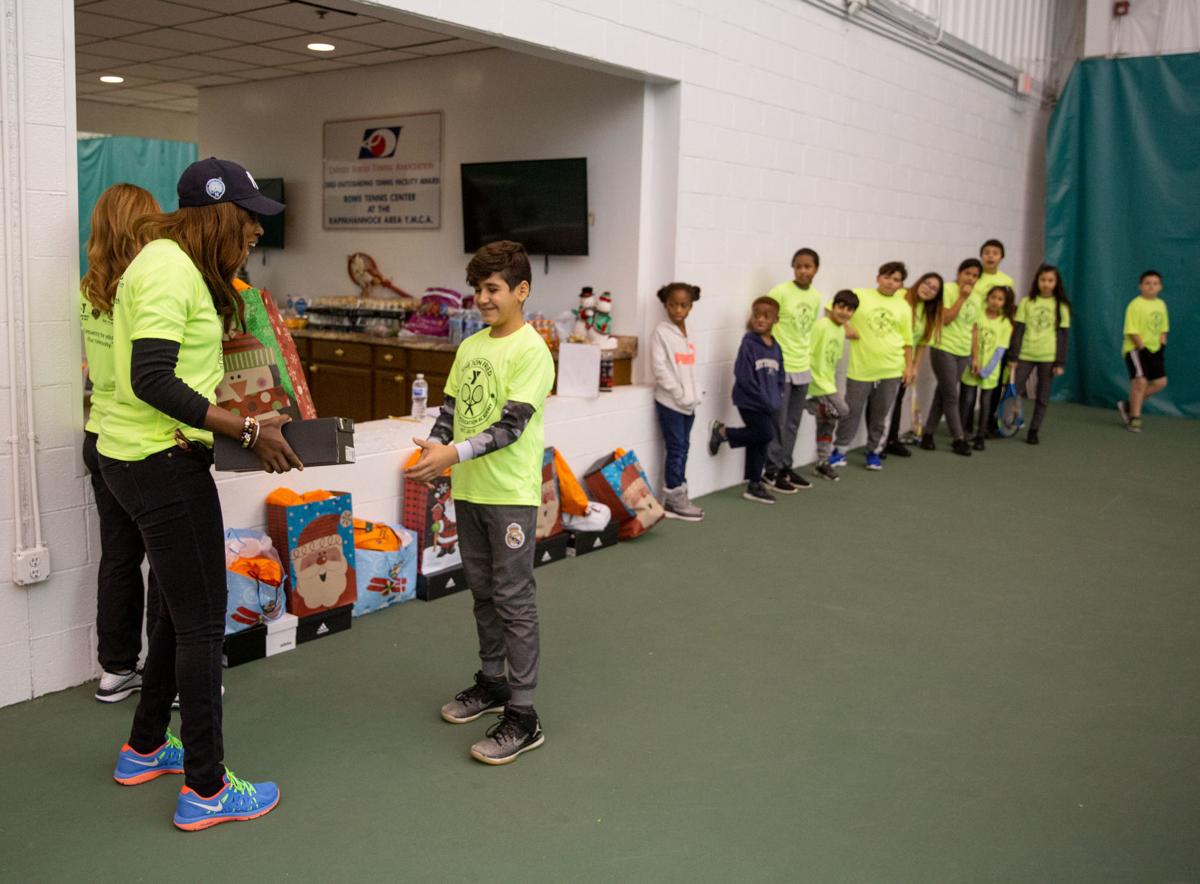 Nana Noi, who heads up the Service Line nonprofit, hands out shoes and other gifts to academy participants. 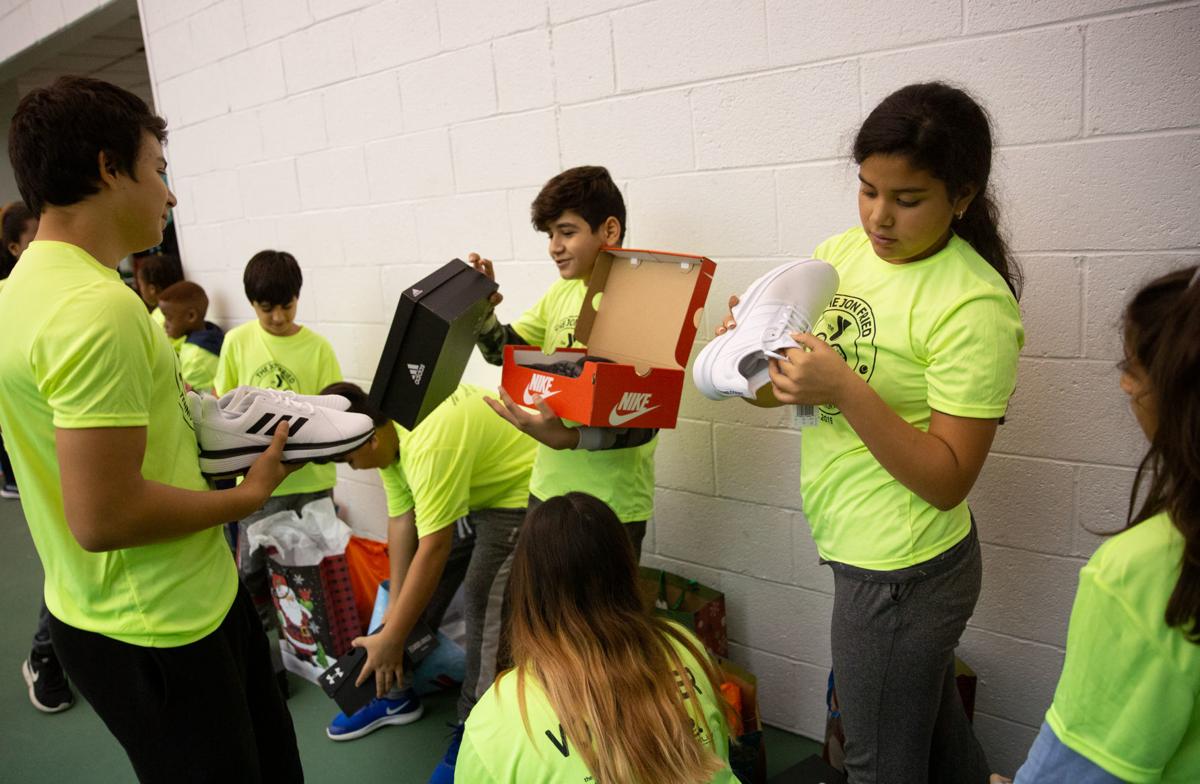 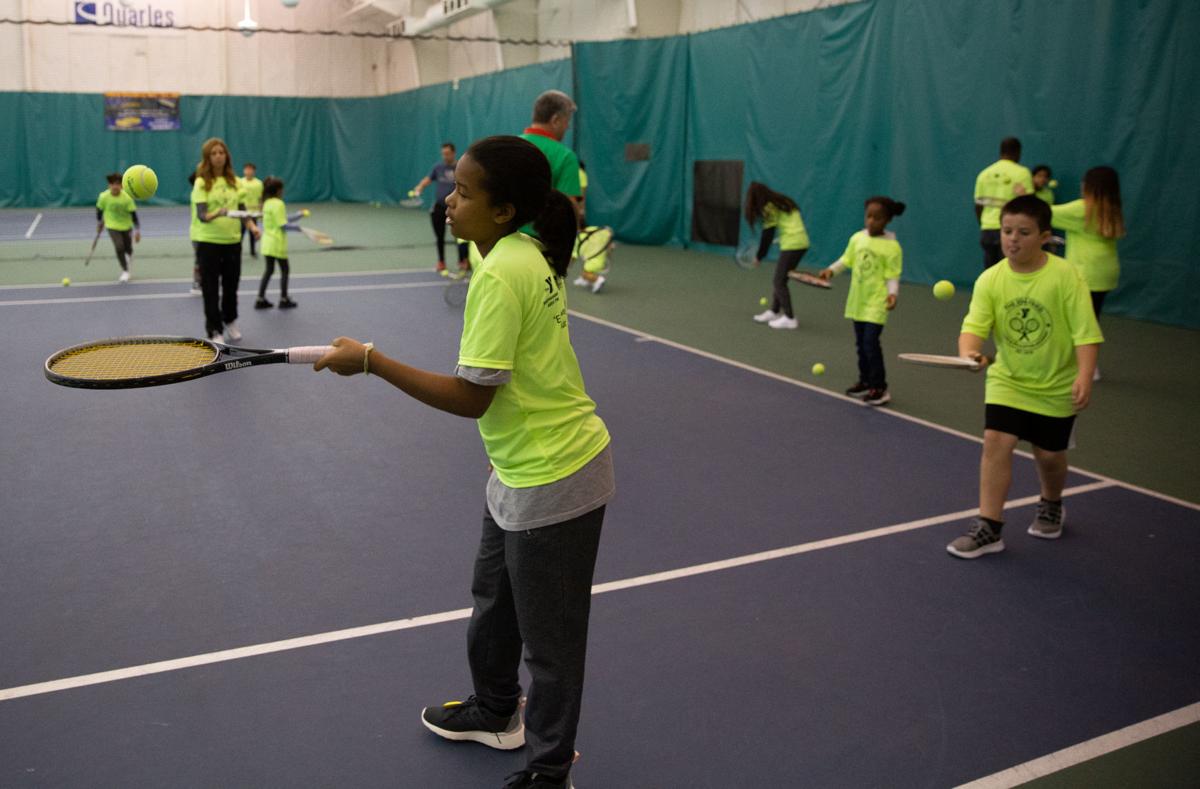 Nnesivva Nnabunaza, 13, warms up with her fellow Jon Fried Tennis Academy students. ‘It’s neat to have something special we get to do here at the Y,’ she said. 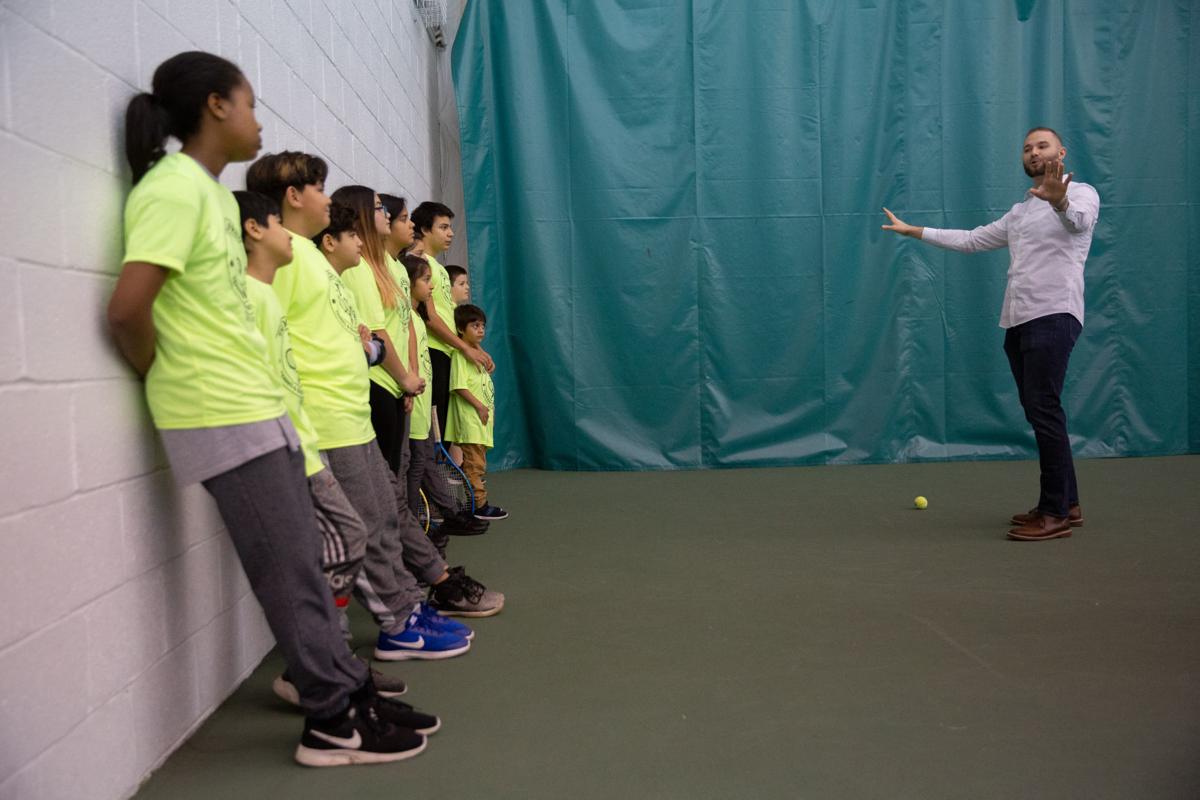 Participants listen to The Way Church pastor Matt Rothe during a session at Massad Family YMCA.

Nana Noi, who heads up the Service Line nonprofit, hands out shoes and other gifts to academy participants.

Nnesivva Nnabunaza, 13, warms up with her fellow Jon Fried Tennis Academy students. ‘It’s neat to have something special we get to do here at the Y,’ she said.

Participants listen to The Way Church pastor Matt Rothe during a session at Massad Family YMCA.

The 18 youngsters arriving for their monthly tennis clinic at the Massad Family YMCA got an inkling something was up Saturday when each got a bright, new “Jon Fried Tennis & Education Academy” T-shirt.

But what the youngsters weren’t ready for was an unexpected Christmas of sorts: each receiving a package filled with new shoes and outfits for tennis.

“Wow, this is the coolest part of this program so far,” said 13-year-old Gabby Ramirez, “getting gifts!”

Nearby, Nnesivva Nnabunaza was grinning as well, tightening up the laces on her spiffy new true tennis shoes.

“It’s neat to have something special we get to do here at the Y,” she said of the program. “I like to play the different kinds of tennis games we do with our coaches. I think I’m starting to get better at tennis, but because I’m left-handed, learning to hit backhand is hard.”

Devlin Reiley, marketing and public relations director for the local Y, said fundraising from the YMCA’s board of directors and others in the community paid for the gifts of tennis gear.

“We’d noticed early on that some who were coming in to take part in the program didn’t have the right clothing and gear to play,” she said. “We can’t really expect them to play their best if they don’t have what they need to succeed.”

Reiley explained that the YMCA and a local nonprofit group it’s now partnering with on the program—Service Line—has for eight months now been providing clinics to about 30 children who wouldn’t otherwise have access to tennis instruction.

The goal: to use the sport as a tool to engage the youngsters and, as the program grows, entire communities to combat challenges that disadvantaged youth can face.

To that end, the Jon Fried Tennis and Education Academy is a stand-alone program under the auspices of the Massad YMCA, existing to take tennis into the heart of urban and disadvantaged communities locally.

And while volunteer instructors who are skilled tennis players have been instructing the children from 5-16, the thought is to also use the sport as a motivator “to deliver education, life skills, nutrition and fitness curriculum.”

Nana Noi, who heads up the nonprofit and now also works as tennis outreach coordinator for the Massad YMCA, noted that Service Line originally formed to be a tennis charity to serve youngsters in different parts of the world. Members visited Ghana with that in mind several years ago, and then later sent youngsters there tennis equipment and clothing.

But the group is also interested in helping youngsters locally who wouldn’t otherwise have access to of tennis, which Service Line’s members believe provides the chance to teach more than how to serve and volley.

“We teach them tennis, but them coming in each month provides the opportunity to teach key developmental things like life principles, leadership skills and academics,” said Noi.

As for the tennis itself, she said that none of the youngsters had ever held a tennis racket when they started. Now, said Noi, all are learning and some are becoming quite skilled.

“But beyond that, for the two hours that we have them, it’s all about positive attitudes and learning things that can help them succeed in live,” she said.

Barney Reiley, the chief executive officer of the Rappahannock Regional YMCA, was at the Massad headquarters branch in southern Stafford Saturday to welcome the youngsters.

“We’re so proud and honored to have you here at the Y. It’s your home,” he said. “We love you and believe in you and we want you to learn the game of tennis. But we also want you to grow up successfully and continue to be the wonderful people that you are now.”

Devlin Reiley and Noi noted that the Fried Academy program is always in need of new or gently used tennis racquets, balls and sneakers, as well as donations to move the program forward.