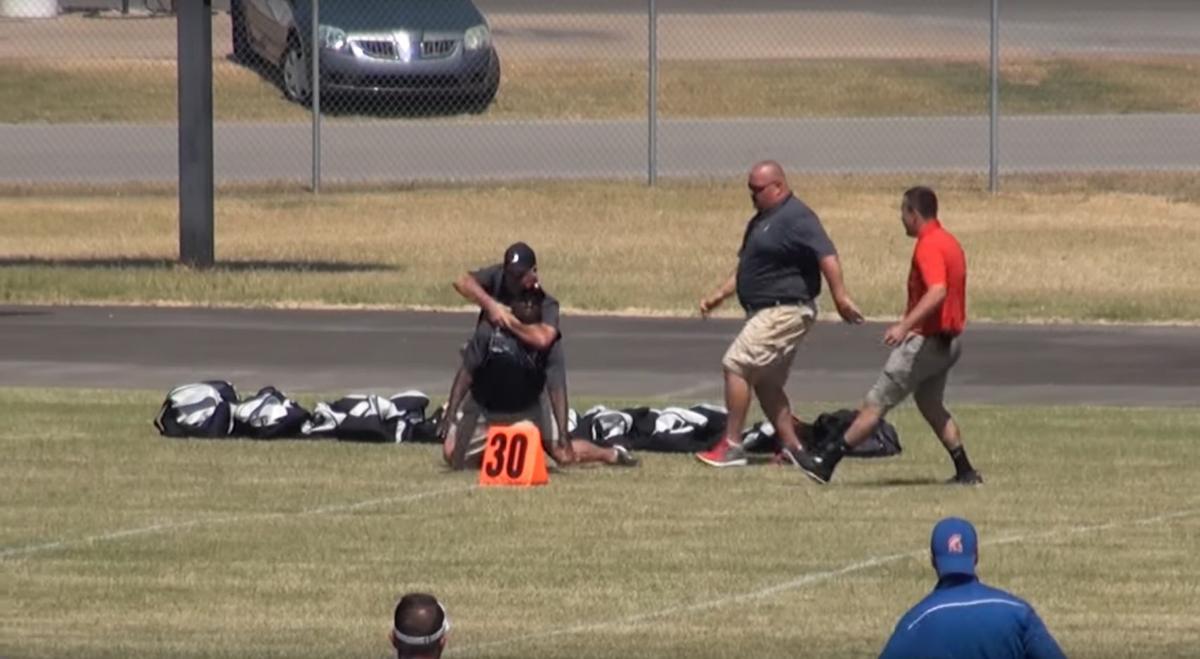 A Union Silver coach places another coach in a chokehold during a third-grade football game against Bixby Blue on Saturday. 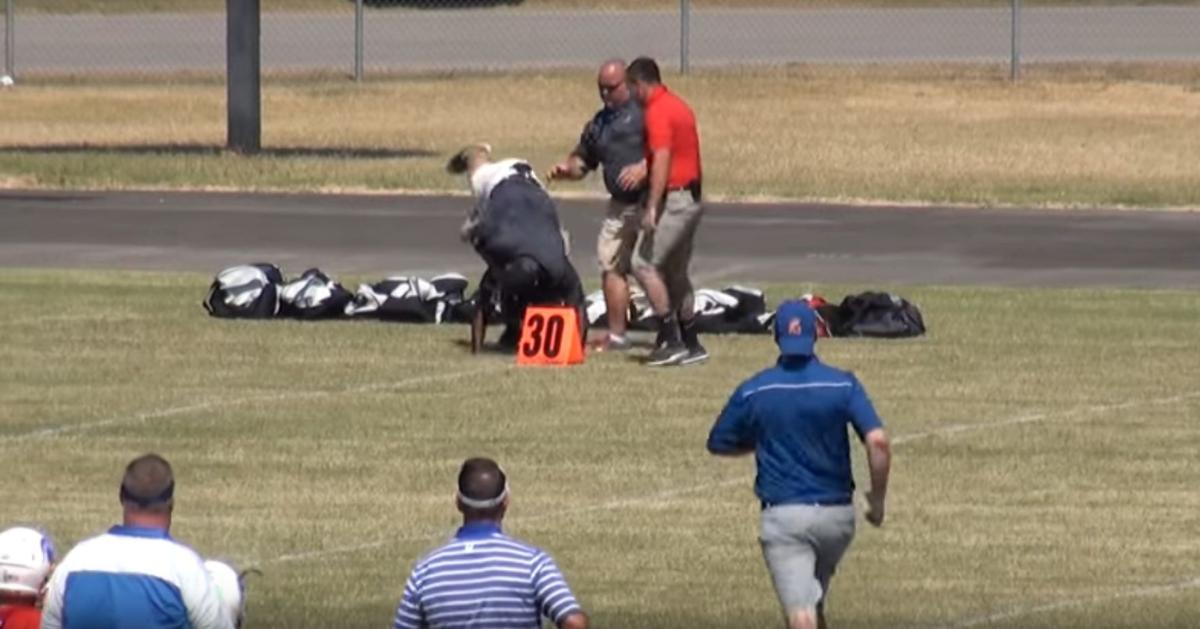 This screengrab from a video shows one Union Silver coach flip over another coach while still attempting to hold him by the neck during a third-grade football game against Bixby Blue on Saturday.

A Union Silver coach places another coach in a chokehold during a third-grade football game against Bixby Blue on Saturday.

This screengrab from a video shows one Union Silver coach flip over another coach while still attempting to hold him by the neck during a third-grade football game against Bixby Blue on Saturday.

Update (12:30 p.m. Tuesday): A statement from the Union Youth Football Association indicates the coaches involved in the incident have been removed as coaches.

"They will no longer be on the sidelines for us," UYFA President Mark Farquhar said in a statement. "One of them has also been removed from our program all together."

He said the group regrets that the situation happened in front of the youth players.

"We are now hoping that we can move on so that our kids can get back to playing football and finish out on a high note," Farquhar said.

The story below appeared in Tuesday's Tulsa World:

A third-grade football game between Bixby Blue and Union Silver ended Saturday with a Union coach putting a colleague in a chokehold over issues with one of the players’ time on the field, according to video footage and statements from those familiar with the situation.

Russell Barber, the man who put the 3-minute, 11-second video on YouTube, told the Tulsa World on Monday that the teams were about resume play toward the end of the game in Bixby when he saw commotion on the sideline, where the taller of two coaches appeared to be yelling at the other.

The video does not include audio because Barber had set up his camera on the other side of the field, but he said he continued to focus the lens on them in case the verbal sparring became something more serious. He said he learned later that the fight, which turned physical, started over playing time for one of the Union Silver athletes.

Union and Bixby are among 36 clubs that play in the Indian Nations Football Conference. INFC Commissioner Mac McLaughlin said Monday night that he thinks any potential punishments for the coaches will be handled by the Union Youth Football Association rather than the conference.

Jay Wood, the third-grade association representative, referred a request for comment to Union Youth Football Association President Mark Farquhar, who released a statement indicating that the UYFA board has been reviewing the footage and various reports on the matter.

“This is not the behavior that we expect from our youth coaches,” he said. “We do not condone this situation and are working through this the best we can so that it will not happen again.”

Farquhar said Monday night that there will be “suspensions and expulsions” as a result of the coaches’ behavior. Details about who will be sanctioned will be finalized and released Tuesday morning, he said.

The clip Barber posted shows the coaches arguing before a child begins speaking with a third coach on the sideline after apparently being taken out of the game. Shortly after that conversation, the taller coach from the beginning of the video — who also spoke with the boy — is seen walking toward the shorter man and grabbing him by the neck from behind as he tries to pick up an equipment bag.

The shorter coach falls to his knees about one minute and 10 seconds into the video, causing the taller one to flip over in front of him while still attempting to hold him by the neck. The other coach who talked to the child jogged over to the scene, but by then the shorter man had managed to get back on his feet and began punching back at his attacker.

A referee can later be seen running over to break up the altercation, as can two others who appear to be Bixby coaches. At roughly 1:45 into the video, a fourth Union coach helps the coach who started the fight up off the ground, takes him aside and begins talking to him.

The man who was attacked can be seen putting his hat back on and walking away after consulting with one of the Bixby coaches. However, the coach who initiated the fight appears to call out again to that man, and they walk toward each other while continuing to exchange words.

The fourth coach is seen standing between the men in an attempt to keep them from fighting again. The coaches are then shown walking side by side off the field.

Barber, a former Jenks coach, said the fight is, unfortunately, not the first such incident that has occurred during a youth football game. He said the game resumed after the fight ended. He said he saw two patrol cars leaving at the same time he did but that he didn’t know whether anyone received a citation.

“They decided to act fools in front of the world,” Barber said of the situation. “I thought if (posting the video) could somehow prevent actions like this in the future, then it will be worth it.”

Farquhar said in his statement that the children are important to the association and that the conduct of the coaches “does not reflect the integrity of Union Youth Football or the Indian Nations Football Conference.”