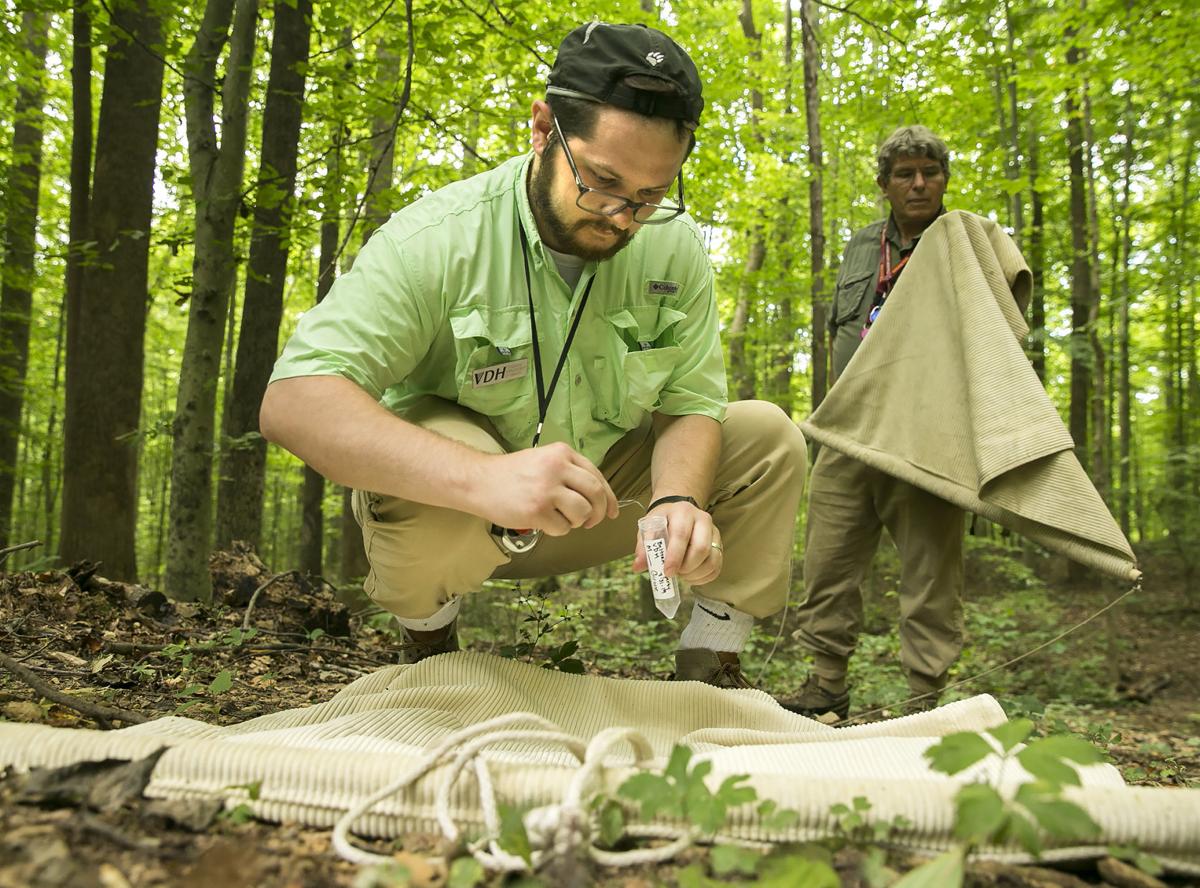 Kyle Girone with the Virginia Department of Health collects a tick while surveying property near the Beltran home. 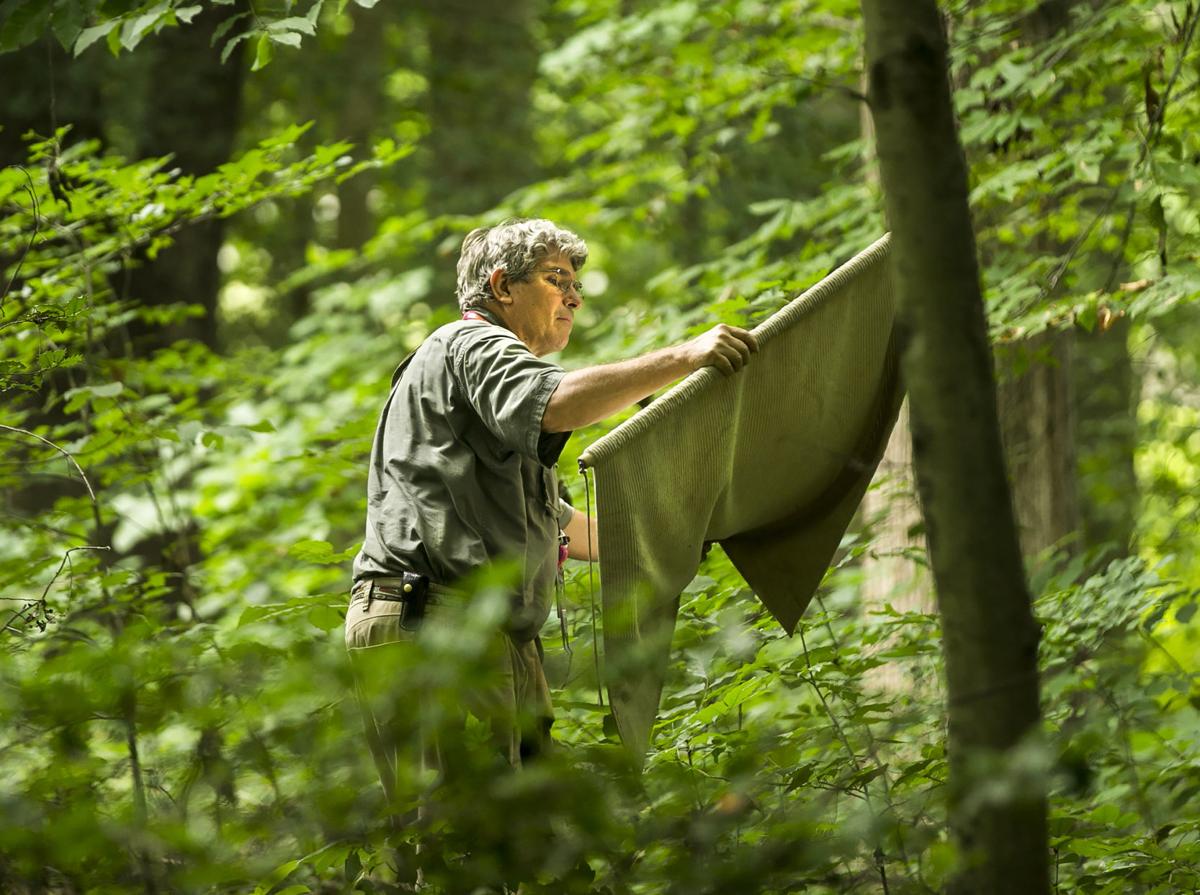 State entomologist David Gaines checks a drag used to search for ticks on the Beltrans’ property in Spotsylvania. 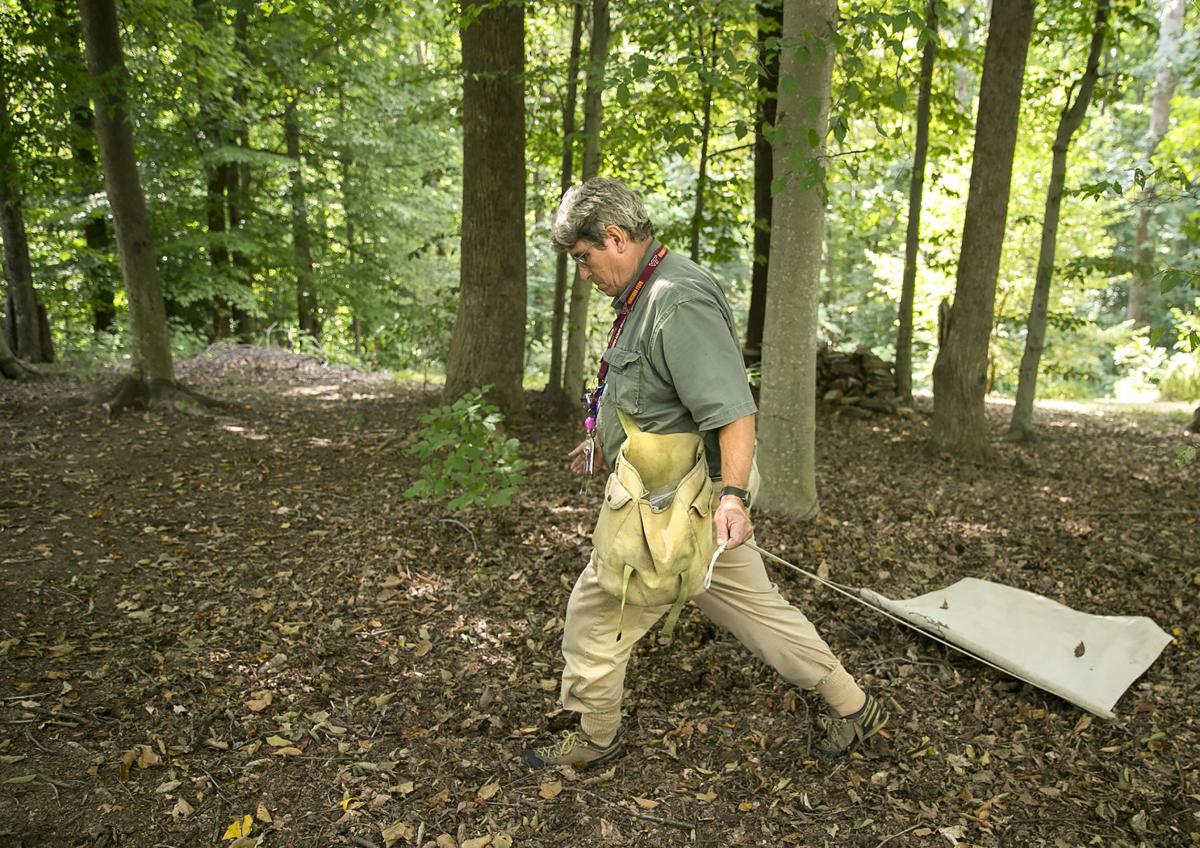 David Gaines, PhD, an entomologist with the Virginia Department of Health uses a tick drag while surveying property near the Beltran family’s Spotsylvania County home on Wednesday, July 31, 2019. 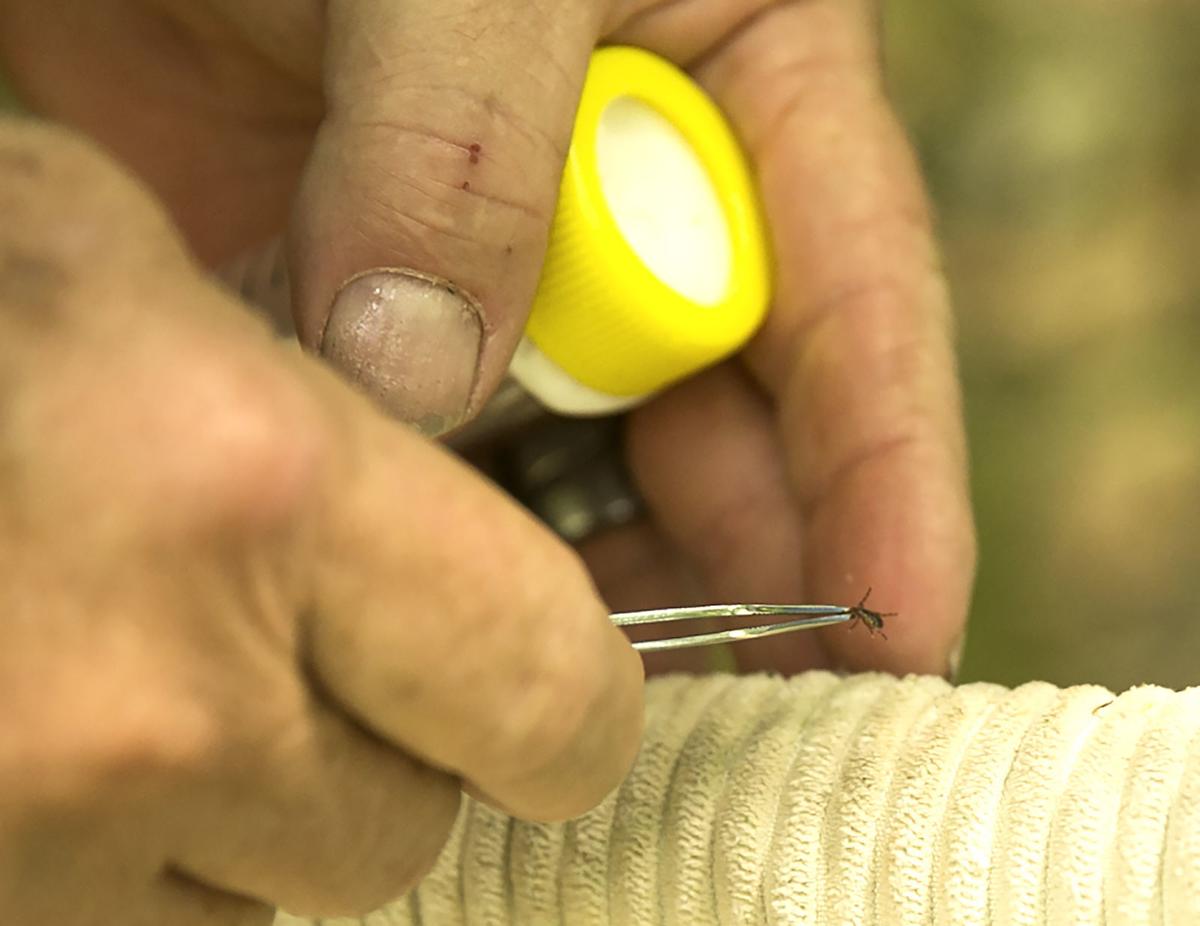 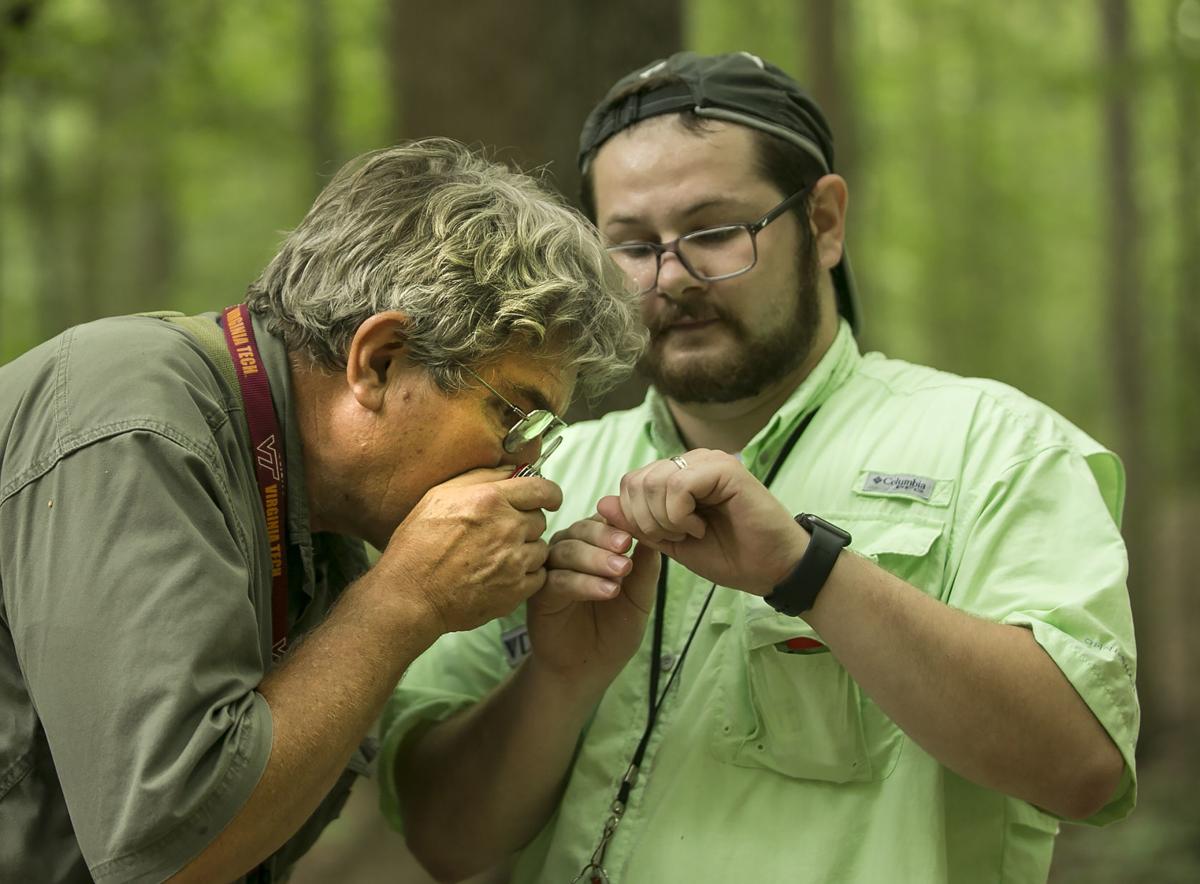 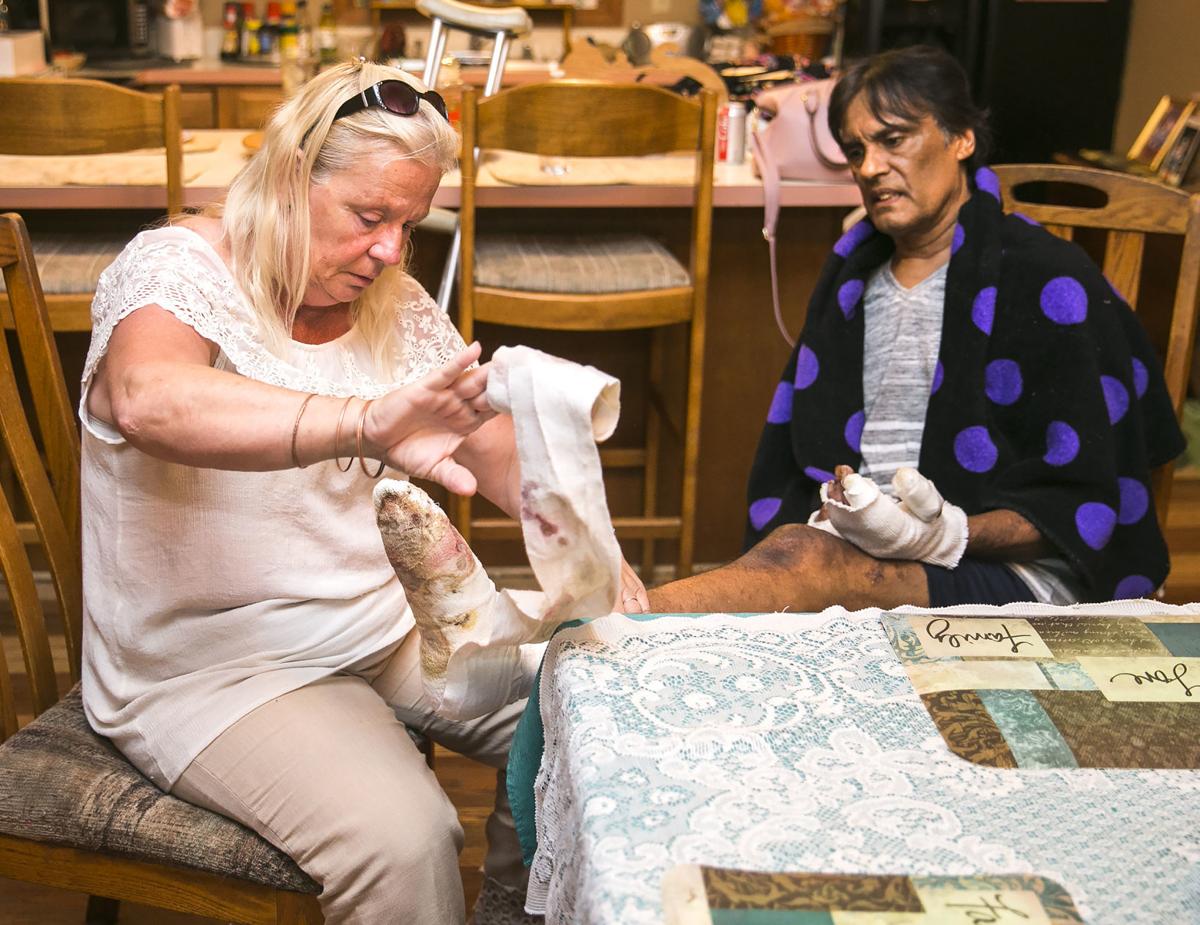 Kyle Girone with the Virginia Department of Health collects a tick while surveying property near the Beltran home.

State entomologist David Gaines checks a drag used to search for ticks on the Beltrans’ property in Spotsylvania.

David Gaines, PhD, an entomologist with the Virginia Department of Health uses a tick drag while surveying property near the Beltran family’s Spotsylvania County home on Wednesday, July 31, 2019.

On the same day that state health officials canvassed his Spotsylvania County yard for ticks, Quintin Beltran had all the toes on his left foot removed as a result of damage caused by a tick bite.

Beltran, 60, was diagnosed with Rocky Mountain spotted fever this spring, a few weeks after he found what he described as an American dog tick on his inner thigh. Initially, his symptoms—vomiting, fever and chills—mimicked the flu, but as his condition worsened, his kidneys and liver started to fail.

Circulation to the small vessels that line his organs, brain and extremities was cut off as a result of the tick-borne disease. In a last-ditch effort to save his life, doctors administered heavy-duty drugs that also affected the vessels, said Beltran’s wife, Diana.

After 32 days in intensive care at VCU Medical Center in Richmond, the flooring contractor came home with his hands and feet blackened from the lack of blood circulation and wrapped with medicated bandages to help them heal.

His left foot suffered the most damage, and when his wife changed the dressings, there was a noticeable foul smell coming from them on July 18, when The Free Lance–Star first visited their home.

He didn’t have insurance, and the couple was waiting for Medicaid approval—which came through the day after the newspaper story.

Last Wednesday, Quintin Beltran was back in the hospital, where a VCU surgeon found an infection deep in his left foot. The doctor cut off about a fourth of the flesh on the bottom of it and the toes, Diana Beltran said.

“Quintin was lucky that it didn’t affect the bone and they didn’t have to [cut off] up the ankle,” his wife said. “But he’s angry and sad, rightfully so, and he doesn’t want to look at it.”

As Diana Beltran waited at the hospital for word about her husband, three officials from the Virginia Department of Health dragged pieces of thick, beige-colored corduroy around the yard and woods of their property, off U.S. 1 near Massaponax.

Because Rocky Mountain spotted fever is rare in Virginia, officials who specialize in tick-borne diseases wanted to see what they could find at the Beltran’s property. Much of their work in this field is funded by the Centers for Disease Control.

“Whenever there’s a Rocky Mountain Spotted Fever, we like to get as much evidence as we can,” said David Gaines, the state public health entomologist. “But it’s pretty rare, and it’s diagnosed willy–nilly all over Virginia.”

Considered one of the deadliest tick diseases, Rocky Mountain spotted fever can be fatal in 80 percent of cases if not treated, according to the Mayo Clinic. Even those who get medical care can be left with organ damage and amputated limbs.

It definitely warrants fear, said Gaines, who earned a doctorate in insect study and has published papers on tick-borne diseases. Virginia is home to 17 tick species, but only four of them—the lone star, blacklegged, American dog and Asian longhorned tick—are a problem for humans.

Ticks can bring about a variety of viruses and illnesses, and there are several strains of similar bacteria, Gaines noted as he rattled off a mind-numbing list of scientific names.

Doctors often don’t know which serological tests to order to look for tick antibodies in the blood, and there’s a lot of education needed in the medical community on tick diseases, Gaines said. Frustrated patients with chronic Lyme disease have said the same, as their condition often is misdiagnosed, especially as it imitates other problems.

But it’s no wonder there’s such difficulty. Lyme disease patients can have the illness but not test positive for it. There’s a tick that can bite people and not make them sick, but will cause them to test positive for Rocky Mountain spotted fever, Gaines said.

Gaines and fellow officials Jim Broyhill, a vector-borne disease epidemiologist, and Kyle Girone, a date and surveillance specialist, dragged what looked like small magic carpets through the grass and forest floor behind the Beltran house. Each marked off 10 meters, turned the cloth over and checked for insects.

Only five ticks were found, too few to test or draw positive conclusions. Diana Beltran had the yard sprayed for ticks twice since her husband’s bite in April because two of their grandchildren live with them. In addition, it’s been so hot and dry, and Gaines said ticks “may have hunkered down” deep in piles of leaves.

Speaking of those “leaf packs,” people often blow them to the back of the property, under trees, where they can become prime habitat for ticks and the small rodents they feed on.

“Kids love to jump into them, and that’s a good place to pick up Lyme disease,” Gaines said.

Two insects found at the Beltrans were American dog ticks, which do cause Rocky Mountain Spotted Fever. Gaines said it’s possible that kind of tick was carried into the house by the family dog and bit Quintin Beltran. But it may be just as likely that a lone star tick got him, Gaines said. That species also causes the fever and is so prevalent, Gaines calls the area “lone star country.”

Because of the difficulty with diagnosis, Gaines suggested that people who are bitten remove the ticks carefully and save them, either in vials of alcohol or plastic bags that can be put in the freezer. Note the date of the bite and be on the lookout for symptoms.

Before their canvas, Gaines and Girone pulled their socks up over their pants and Broyhill wore a type of chaps, without cowboy fringes, to cover his lower legs. All three sprayed permethrin, an insecticide meant to kill the ticks before they can bite.

Gaines stressed that ticks come from the ground up, not from trees, so it’s crucial to protect the body from the knees down. However, permethrin should not touch the skin or “it’ll make you feel like you had too many cups of coffee,” Gaines noted.

The men carried basic tools, in addition to the corduroy they dragged, including a clicker to note meters covered, vials to hold collected ticks and long-nose tweezers that hung from lanyards.

Gaines also carried a Swiss Army knife with a magnifying glass. Even to the trained eye, it’s hard to tell one tiny tick, no bigger than a pin head, from another.

That was obvious when Girone located a blacklegged tick in its larval stage. Smaller than most freckles, the tick scurried around his thumb and was so small that most people seeing it wouldn’t know what kind of bug it was.

But as Quintin and Diana Beltran discovered, a tiny tick packs a powerful punch. She said how shocked she’s been that “such a big guy was taken down by a little tick.”

The Beltrans continue to struggle financially without his income, and Diana Beltran is worried about losing their home. Del. Bobby Orrock’s office has reached out to help him apply for disability. There’s also a GoFundMe account set up for them online.

The Virginia Department of Heath is asking residents to send ticks found on themselves or family members to its tick surveillance team so officials can determine the incidence and type of ticks present in the state.

To participate in the Virginia Citizen Tick Survey, people should use tweezers to grasp the head of a tick, being careful not to rupture its body. Pull it in an upward motion until it releases from the skin, then wash hands and apply antiseptic to the bite.

Put the ticks in a zipper lock bag with a bottle cap of rubbing alcohol to kill them, then go online to fill out the survey, which includes mailing directions. More information is available online by searching for Virginia Tick Survey.