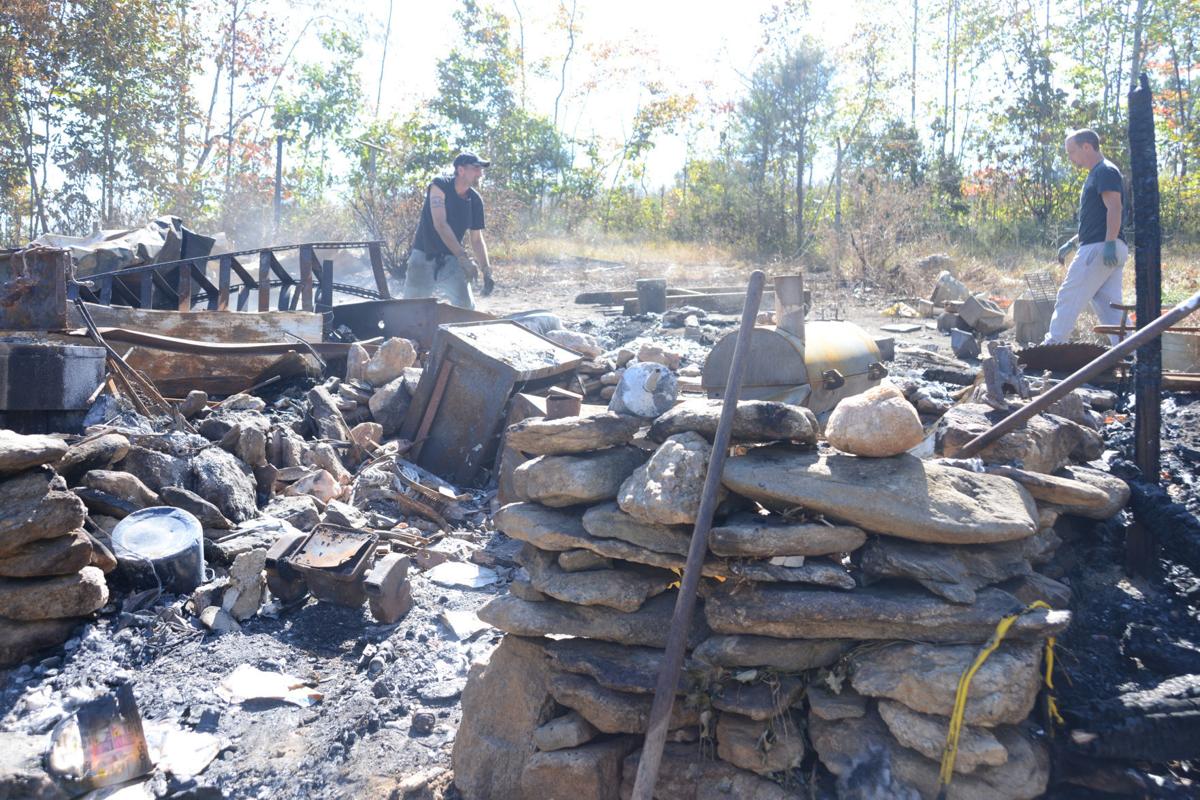 Kenneth Taber (left) and Scott Spenser (right) sift through the still smoking rubble from the Oct. 3 fire in Axton that decimated the four-bedroom mobile home that housed Fred and Dorothy Taber along with eleven of their family members. 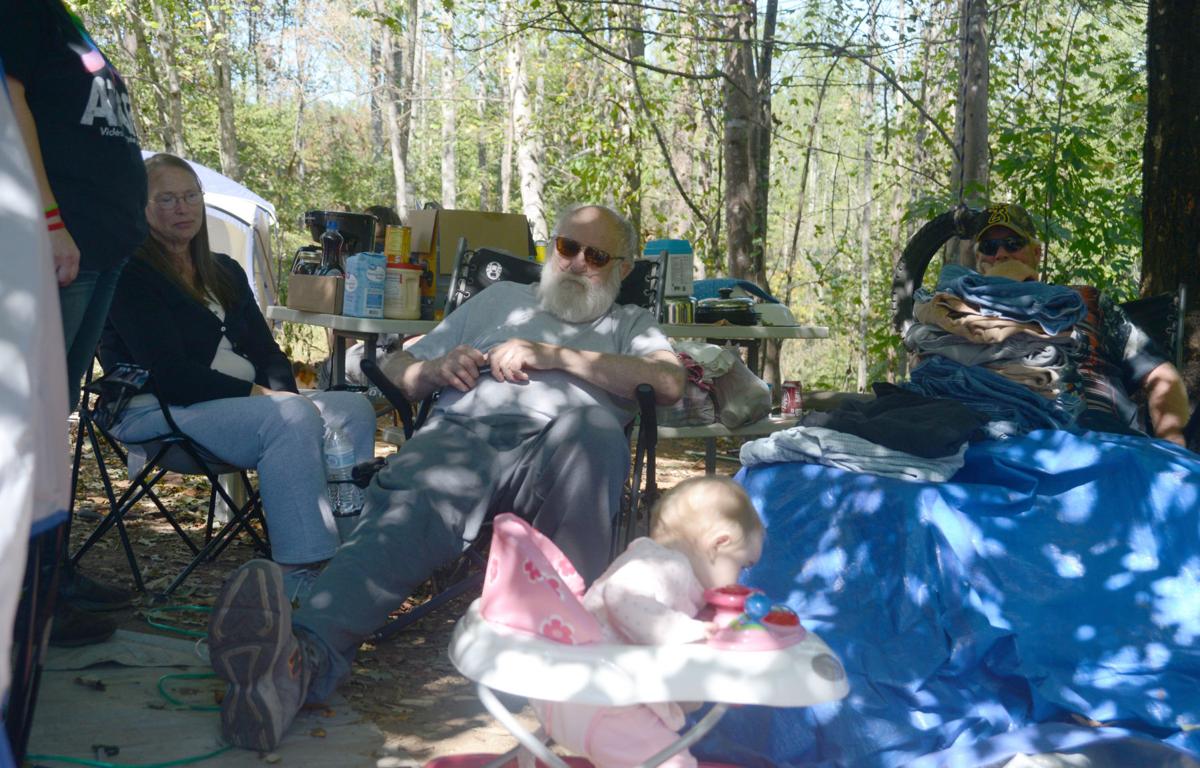 Fred Taber, 80, sits with his wife, Dorothy Taber, brother-in-law and granddaughter in what the family is jokingly calling their homestead — a set of tents on the property where some of them are living right now. 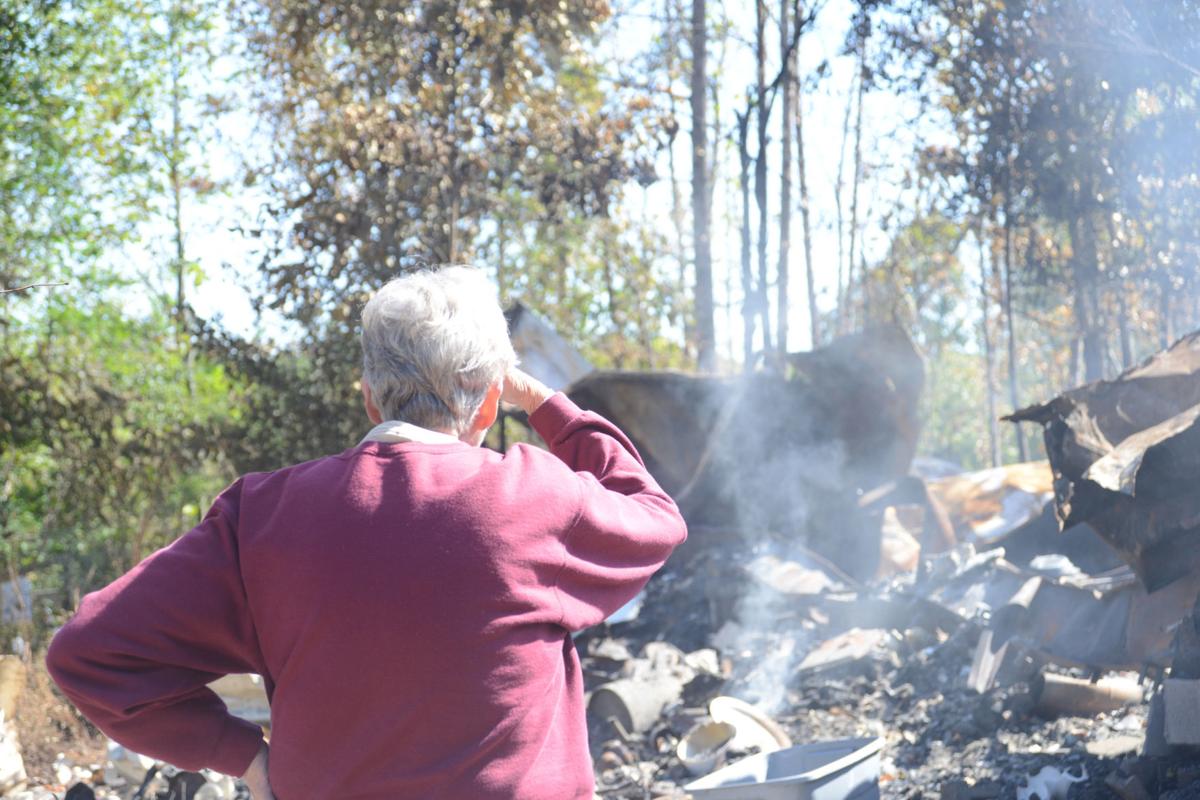 Kenneth Taber (left) and Scott Spenser (right) sift through the still smoking rubble from the Oct. 3 fire in Axton that decimated the four-bedroom mobile home that housed Fred and Dorothy Taber along with eleven of their family members.

Fred Taber, 80, sits with his wife, Dorothy Taber, brother-in-law and granddaughter in what the family is jokingly calling their homestead — a set of tents on the property where some of them are living right now.

AXTON — Dorothy and Fred Taber lost more than their home of 30 years to an Oct. 3 fire that left a pile of rubble; they lost all but one of the pictures of their late son, Richard, who died as a 2-year-old in 1977. The fire also ruined the first Christmas present Dorothy gave Fred more than 40 years ago: a hammer.

A week after the blaze, smoke still wafts from the charred mess off Nowhere Road — a gravel lane straddling the border between Henry and Pittsylvania counties. What once was a four-bedroom, double-wide mobile home with multiple add-ons that housed 13 family members from ages 11 months to 80 years is now a pile of rubble, ash and mangled roof.

Many of them have taken residence with other nearby relatives, but 62-year-old Dorothy, Fred, 80, and their adult son, Kenneth, are living in tents on the property.

A retired couple that was using their social security and their home to support many family members, the husband and wife aren’t staying on the premises just because they enjoy camping; they are continuing to care for Dorothy’s parents, who are in poor health and live in a mobile home next door.

“It’s been kind of overwhelming for me,” Dorothy Taber said.

The blaze started when a blower fan in the chicken house, where Kenneth Taber and his girlfriend were staying, caught on fire, the family said. Those flames then spread to the house.

Fred Taber, who uses an oxygen tank to breathe, was working on the computer when the air conditioner turned off. In an attempt to fix it, he flipped the breaker, only for sparks to shoot out.

That’s about the time when son in law Justice Gibson — elsewhere in the house — realized what was happening.

“The whole back of the house is on fire,” he yelled to them.

Fred Taber ran outside to get the water hose, but the nozzle was shot and water just dribbled out. He partially plugged a finger over the nozzle to create a fast-shooting jet of water, but by that time the windows were already blowing out of the house.

Realizing the fire was too intense to contain, the seven people inside the home scrambled outside, scampering down the the hill to the trailer where Dorothy Taber’s parents live.

Dorothy Taber was away when the blaze erupted, picking up one of her grandchildren from school. She returned home in time to spot Justice Gibson running into her parent’s house with their pet guinea pig in a cage. He told her to get what possessions she could before it was too late.

She rushed into the house and grabbed a bag of movies that happened to be on the bed, as well as some medication belonging to her and Fred Taber. The laptop computer she tried to rescue wouldn’t unplug, and the smoke was too thick when she tried to go back in.

Four fire departments raced to the scene, struggling for hours to contain the flames.

When they left that night, half of the house was gone and the other half was still standing with severe smoke damage. Before the fire was out, a member of the American Red Cross arrived and put the family up in a nearby hotel for two nights.

Sometime during the night, the fire rekindled, completely leveling the remaining section of the house — a neighbor called the family to deliver that bit of news.

The Axton Volunteer Fire Department, which ran point on this operation, could not be reached to comment on the cause of the fire.

Digging through the rubble with Scott Spenser on Wednesday afternoon, Kenneth Taber found the family’s crock-pot, which still contained a batch of sauerkraut that was simmering when the fire began. Smoke still billowed in the air as a result of the Frank and Dorothy Taber’s library of more than 1,000 books — many of them historical.

The only indication that the smoking pile of rubble was once a house was the mangled, twisted sections of roof and the section of a patio that Fred Taber had built — it included stones he had dug out of a nearby stream.

“We used to sit out here everyday,” Dorothy Taber said.

Cast iron skillets and some iron tools are among the few items in the house the family expects to be able to use again.

Fred’s sister, Diane Michaelis, who lives in Williamsburg, came to help her brother and his family recover from the loss.

“He’s made a home for too many people for him to be sitting here in a tent,” she said.

Even though the family is without a home and has lost the majority of their possessions, the kids are still going to school, just like normal.

“The kids have their routine and that’s just been wiped right out,” said Jessica Gibson, Justice Gibson’s wife, with whom she has four kids.

That hasn’t prevented them from doing everything they can to stay positive and continue with some regular activities.

“They’re trying to keep what normal they can for the kids,” Micahelis said.

Part of that positive attitude is the joking reference to the set of tents as a homestead and a refugee camp.

Moving forward, Fred and Dorothy Taber are taking their living situation a day at a time. They don’t plan to live in tents forever.