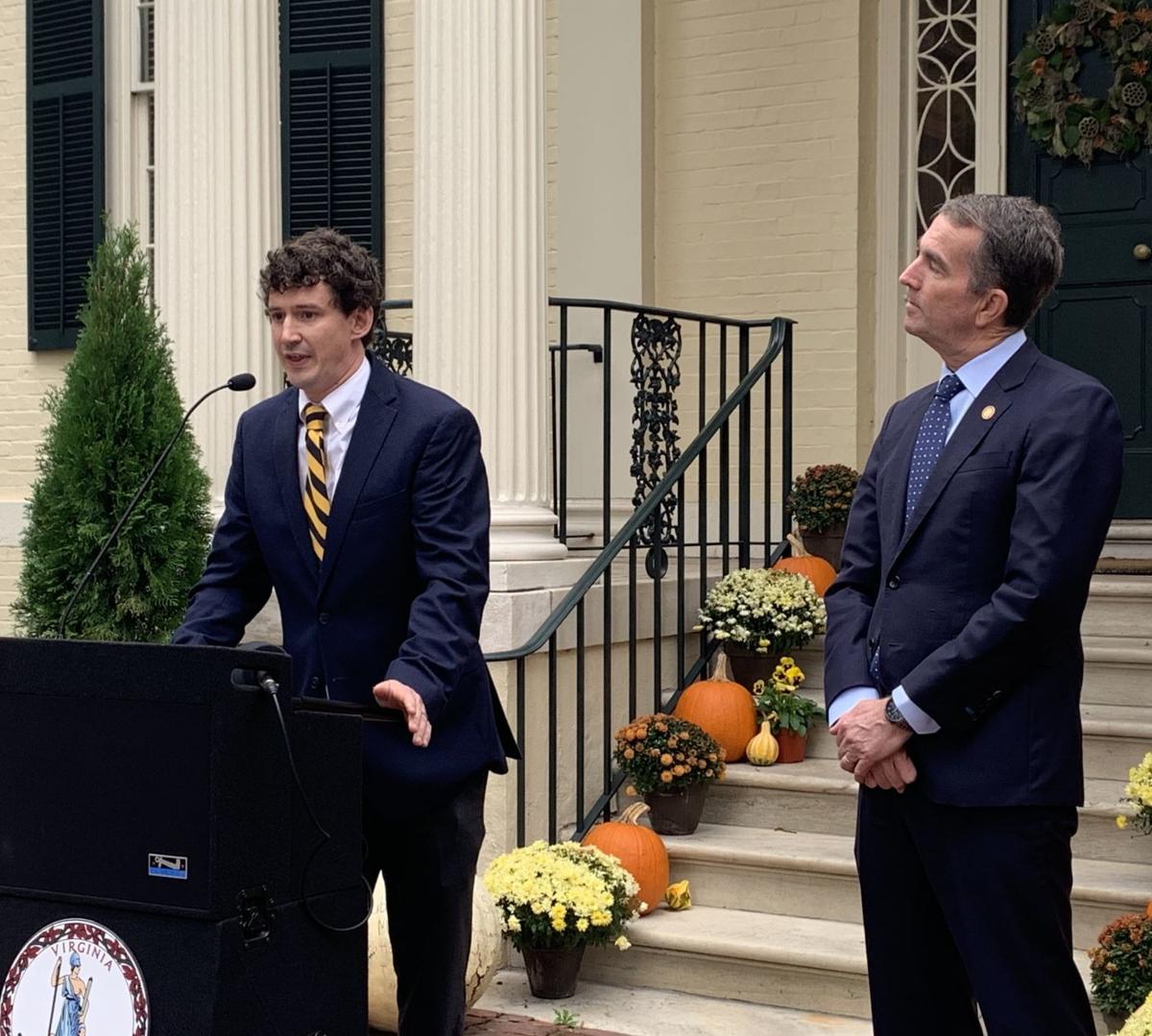 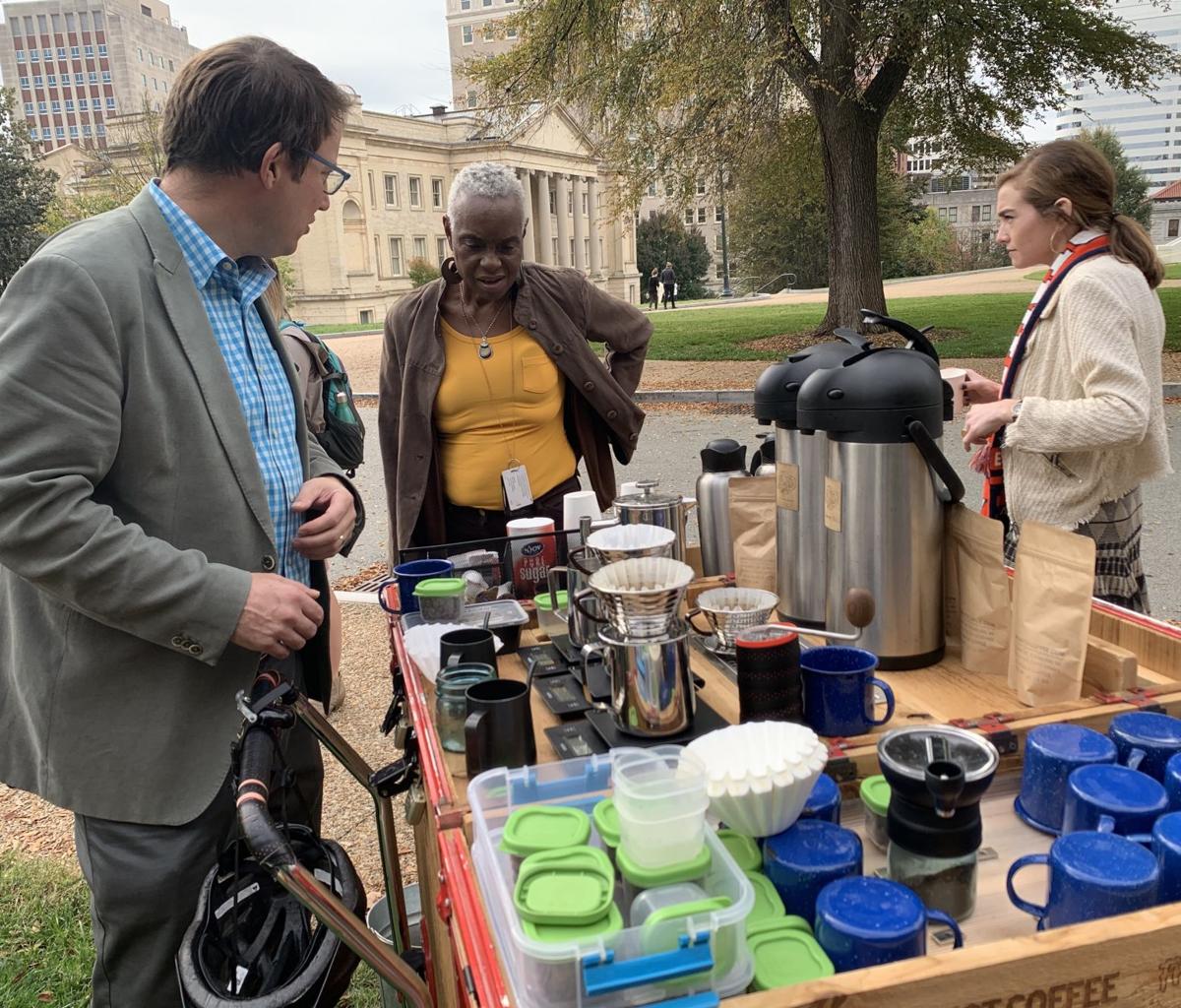 VCU professor John Freyer (left) served coffee at Capitol Square on Wednesday after Gov. Ralph Northam announced a $675,000 grant to help collegiate recovery programs. Freyer, who is associated with Rams in Recovery at VCU, said the group uses a bicycle-mounted coffee cart to spark conversations about drug addiction and recovery.

VCU professor John Freyer (left) served coffee at Capitol Square on Wednesday after Gov. Ralph Northam announced a $675,000 grant to help collegiate recovery programs. Freyer, who is associated with Rams in Recovery at VCU, said the group uses a bicycle-mounted coffee cart to spark conversations about drug addiction and recovery.

Gov. Ralph Northam on Wednesday announced a $675,000 award for Virginia Commonwealth University to help eight other universities develop and expand addiction recovery programs modeled on VCU’s over the next two years.

Speaking to representatives from the university, recovery advocates and state health officials in front of the Executive Mansion, Northam said the use of federal grant money to combat the opioid epidemic will help college students with substance abuse disorders realize their full potential.

With about 1,500 people dying of drug overdoses in Virginia last year, Northam said addiction, and the opioid epidemic specifically, has become the state’s largest challenge.

“That’s something we should all find unacceptable,” he said. “Our college campuses and universities are no exception to this. This is a challenge that doesn’t discriminate.”

The number of fatal drug overdoses statewide declined 3.3% from 2017 to 2018, but a quarterly Virginia Department of Health report published this month shows that the number of deaths is trending toward a 4% increase this year.

The grant money will pay for clubhouse facilities, support staff, social events and attendance at professional conferences that recovery advocates say are needed to help students with addiction find help and a community of their own.

Tom Bannard, the program coordinator for Rams in Recovery, said VCU provides a dedicated space, resources and a peer group for students who might otherwise feel ostracized on campus, feeling that they can’t go to parties or social functions where alcohol or drugs might be present.

“The core reason for collegiate recovery is that students shouldn’t have to choose between recovery and their education,” said Bannard, who has been in recovery for more than a decade and helped establish a recovery program while studying at UVA in 2008.

“Within that college environment, we have students with severe substance abuse disorders for whom their recovery is not supported in the general campus culture. So they have to find a community within that to get the supports that can help them thrive,” he said.

Mira Signer, acting commissioner of the Department of Behavioral Health and Developmental Services, said Rams in Recovery has proven to be effective based on its programming and leadership, as well as the support it has received from VCU’s administration and student body.

“Being able to take that model and apply it elsewhere, to replicate what we know is working, there’s a lot of power there. I think it’s really helped a lot,” she said.

Kevin Doyle, a Longwood University professor who worked with Bannard to establish Hoos in Recovery at UVA more than a decade ago, said he’s now working to develop a similar group at Longwood. Doyle said Longwood Recovers has been around since 2013, but that the new funding will help reactivate the program there.

Doyle said collegiate recovery groups have existed since the 1970s, but that the opioid epidemic has raised awareness and led to the development of a more organized statewide network of campus recovery groups in the last decade.

“I think students addressing this early ... rather than waiting for all the catastrophic things to happen, sometimes that can make you feel like you’re alone. So the mutual support and working together helps them get through those early stages of recovery,” he said. “The need has always been there.”