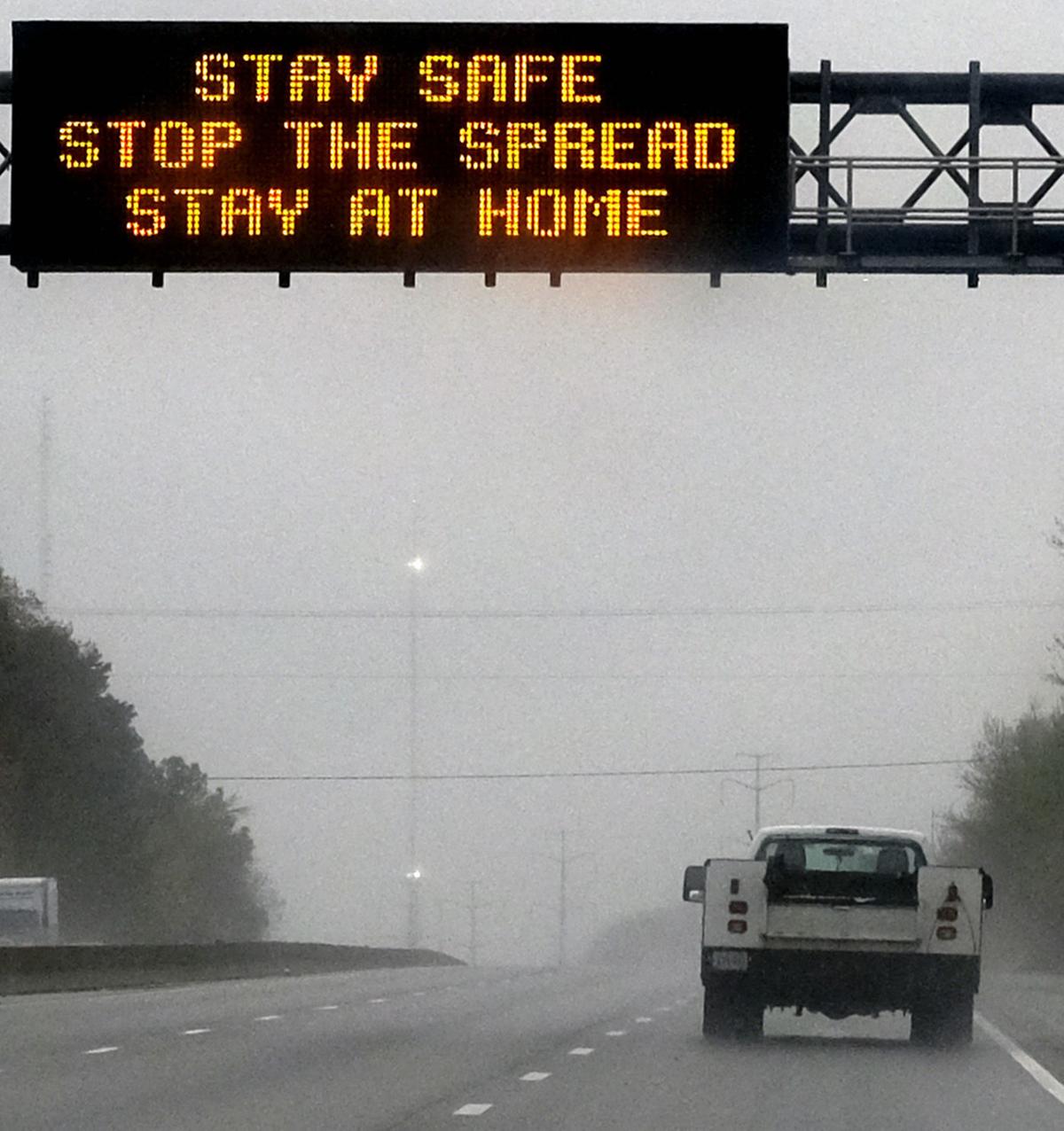 A sign on Interstate 95 in Chesterfield County urged motorists to stay home to control the spread of the coronavirus in Virginia. 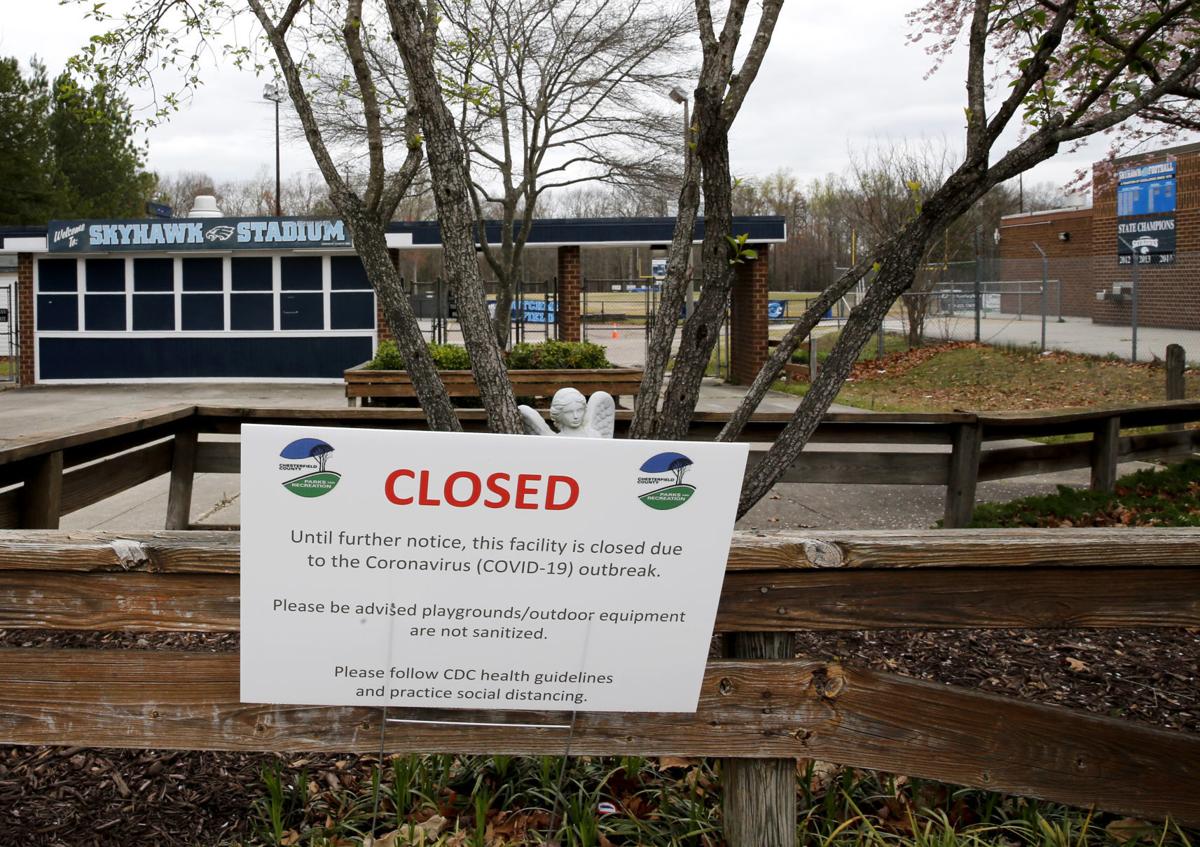 A sign from Chesterfield County Parks and Recreation indicates the closing of the stadium and track at L.C. Bird High School Tues. March 24, 2020.

A sign on Interstate 95 in Chesterfield County urged motorists to stay home to control the spread of the coronavirus in Virginia.

A sign from Chesterfield County Parks and Recreation indicates the closing of the stadium and track at L.C. Bird High School Tues. March 24, 2020.

The announcement comes as the state moves to build capacity of beds and equipment at its health care facilities, anticipating surges due to the novel coronavirus, as the statewide number of cases reached nearly 400.

“This will preserve bed space, and also equipment including ventilators, and [personal protective equipment],” Northam said at a news briefing.

Any area intensive care unit, where the most serious coronavirus cases end up, could go through 240 pieces of personal protective equipment per patient, per day, Northam said anecdotally. He said the number accounts for the 10 or so doctors and others who would be caring for a patient around the clock, changing out masks and gloves, among other items. That explains why there is a worldwide shortage of the equipment, as states within the U.S. and other countries compete for available supplies, causing prices to rise.

Also on Wednesday, the state announced three more deaths from the respiratory virus, and 392 people have tested positive for COVID-19. That is an increase of 102 cases, or 35%, from the 290 reported on Tuesday.

Two adults in the Peninsula Health District died, according to State Epidemiologist Lilian Peake, as did a Pittsylvania County man, Landon Spradlin.

Spradlin, 66, was an accomplished blues musician who pastored several different churches over the years, the family told the Danville Register & Bee.

Spradlin was in New Orleans with his wife, Jean Spradlin, when he started getting sick. On their way back to Gretna on March 17, his condition worsened to the point where he could hardly breathe. So Jean Spradlin took her husband to the hospital in Concord, N.C., where the test came back positive the next day, she said. He died around 4 a.m. Wednesday at the North Carolina hospital.

A fourth death was reported Wednesday just after the governor’s update — a resident at Canterbury Rehabilitation & Healthcare Center, a Henrico County long-term care facility battling an outbreak of COVID-19. Two other residents from Canterbury died this week, making them the first deaths in the Richmond region. Its director said Wednesday that 14 patients and three health care workers have tested positive.

The deaths bring the statewide toll to 13 residents — 7 in the Peninsula Health District, 3 in Henrico, 1 in Fairfax, 1 in Virginia Beach and 1 from Pittsylvania.

Among those is a Fort Lee service member who tested positive for the coronavirus on Tuesday. He is a California National Guard soldier in his 30s, who was on temporary assignment to Army Logistics University at Fort Lee, a spokesman said Wednesday.

As a student at the logistics university, the soldier was staying at the Holiday Inn Express on post, where he has been self-quarantined since March 17.

The spokesman said there are no plans to move the soldier from his room and he is receiving appropriate medical care in isolation there. Medical staff at the Kenner Army Health Clinic said the soldier is now “asymptomatic and may be able to return to duty this week following consultation with his medical provider.”

The VDH said that 5,370 people have been tested for the virus in Virginia. There are cases in 54 Virginia cities and counties, an increase of 12 since Tuesday.

But this might not show the whole picture because state officials have said there’s a 19-hour lag in the reporting of statewide numbers, and figures on the VDH website might not include cases reported by individual localities or local health districts.

Powhatan County reported its first confirmed case Wednesday evening, which was announced after VDH’s 5 p.m. deadline. The patient is self-isolating, county officials said in a statement.

Northam, a physician, said he expects the numbers to continue to rise even as efforts mount to contain the spread of the virus.

The executive order postponing elective surgeries does not apply to “patients with emergencies or urgent needs,” abortions, or “the full suite of family planning services,” it reads.

Northam also said the state is “exploring ways to make it easier for qualified medical professionals to help out,” including reworking the state’s licensing procedures and considering the use of medical school students.

He also hopes to use the Virginia Medical Reserve Corps, which he described as “a force of dedicated volunteers who stand ready to support the community in the event of a public health emergency such as this.” More than 8,000 volunteers are ready to deploy currently — 1,500 of them volunteering in the last month, he said.

The state has also begun working with the U.S. Army Corps of Engineers to identify sites around the state that could be used as health care facilities “should the need arise,” Northam said. These could include a wide array of locations like empty higher education buildings.

“We anticipate overburdening the capacity of our health care system,” Northam said. “We see that coming. We want to prepare for that.”

A day after VCU Health System announced that it was working on a potential treatment for moderate and severe cases of the virus, the hospital said it is now piloting a COVID-19 test that it created in-house to identify whether hospitalized patients with severe symptoms are infected with the virus.

The hospital system intends to use the test to confirm and rule out COVID-19 cases with a goal of same-day results, according to a news release.

“Being able to determine whether a patient does or does not have COVID-19 quickly is of critical importance,” said Christopher Doern director of microbiology at VCU Health, in a release. “Being able to do that in our own laboratory will be a game changer in how we manage patients with potential COVID-19 symptoms.”

UVA Health also created its own test, which it debuted March 18, and announced Wednesday that it would be making it available for other hospitals in Virginia and surrounding states to use.

Northam announced the state’s public parks will be open during the daytime only.

“We will close campgrounds, cabins and bath houses, starting Friday morning,” he said. “This is in line with what other states are doing, as well as some national parks.”

Also on Wednesday, Chesterfield announced measures to prevent large gatherings in its parks. While they remain open, the county will begin removing the rims from basketball courts; nets from tennis, pickleball, and volleyball courts; and soccer and lacrosse goals throughout the county’s park system “to prevent organized play where the courts cannot be secured by gates and locks.”

Richmond Mayor Levar Stoney on Tuesday threatened to close the city’s parks if people did not adhere to social distancing guidelines and stop gathering as groups. This came after Northam ordered closed all entertainment venues and set restrictions on other businesses.

The Richmond Police Department said anyone who see sees an establishment out of compliance with this order and is concerned for public health should call the department’s non-emergency number: (804) 646-5100. This also applies to residents who see large groups not practicing social distancing in city parks and outdoor spaces, police said Wednesday.

Henrico, Hanover, Chesterfield and Richmond have all announced measures to help businesses and property owners lessen some of the negative economic effects from these closures, including postponing upcoming tax payments.

Henrico is launching an initiative to support locally owned restaurants, caterers and similar businesses by purchasing meals for public safety workers and other employees leading the community’s response to the COVID-19 coronavirus pandemic.

Colonial Williamsburg is closing most of its hotel properties, and the Historic Area and art museums will remain closed through April 30.

Colonial Williamsburg Foundation, which runs the living history museum and hotel properties, said Wednesday afternoon that it will close the Williamsburg Inn, the Griffin Hotel and the Woodlands Hotel & Suites starting March 27. The Williamsburg Lodge will remain open.

Most of the hospitality staff — about 690 employees — will be placed on emergency administrative leave with full pay and benefits through April 11, and then furloughed for the balance of the closure period, the foundation said. This benefit also has been extended to cover most part-time employees who work less than 1,000 hours per year.

The Historic Area and museums have been closed since March 16 and tentatively were scheduled to resume operations on March 30.

“These are difficult decisions, but based on input from leaders across our organization, our regional partners and the healthcare community, we are convinced this is the most responsible course of action,” said Cliff Fleet, president and CEO of the Colonial Williamsburg Foundation. “Our priorities are safeguarding the health of our staff, guests and the community, and helping the community and our employees through this very challenging time, while also protecting Colonial Williamsburg as a cultural institution.”

As has been the case since the foundation announced its initial shutdown, regular hourly employees in the Historic Area, art museums, operations and related areas who are unable to work because of the closure will continue on emergency administrative leave and will receive full pay and benefits.

But employees who earn $50,000 or more per year, including senior management, will immediately take cuts in pay, with higher compensated managers taking the greatest cuts.

A spokesman for Chesterfield County Public Schools did not respond Wednesday to a request for comment.

The foundation will keep open Williamsburg Lodge to assist local government and public health officials with emergency needs. The foundation also offered the Governor’s Inn as a potential emergency housing and care facility.

A third resident of a nursing rehabilitation center in western Henrico County has died and nearly a dozen more patients and four health care workers have been infected by a COVID-19 outbreak in a highly vulnerable population.