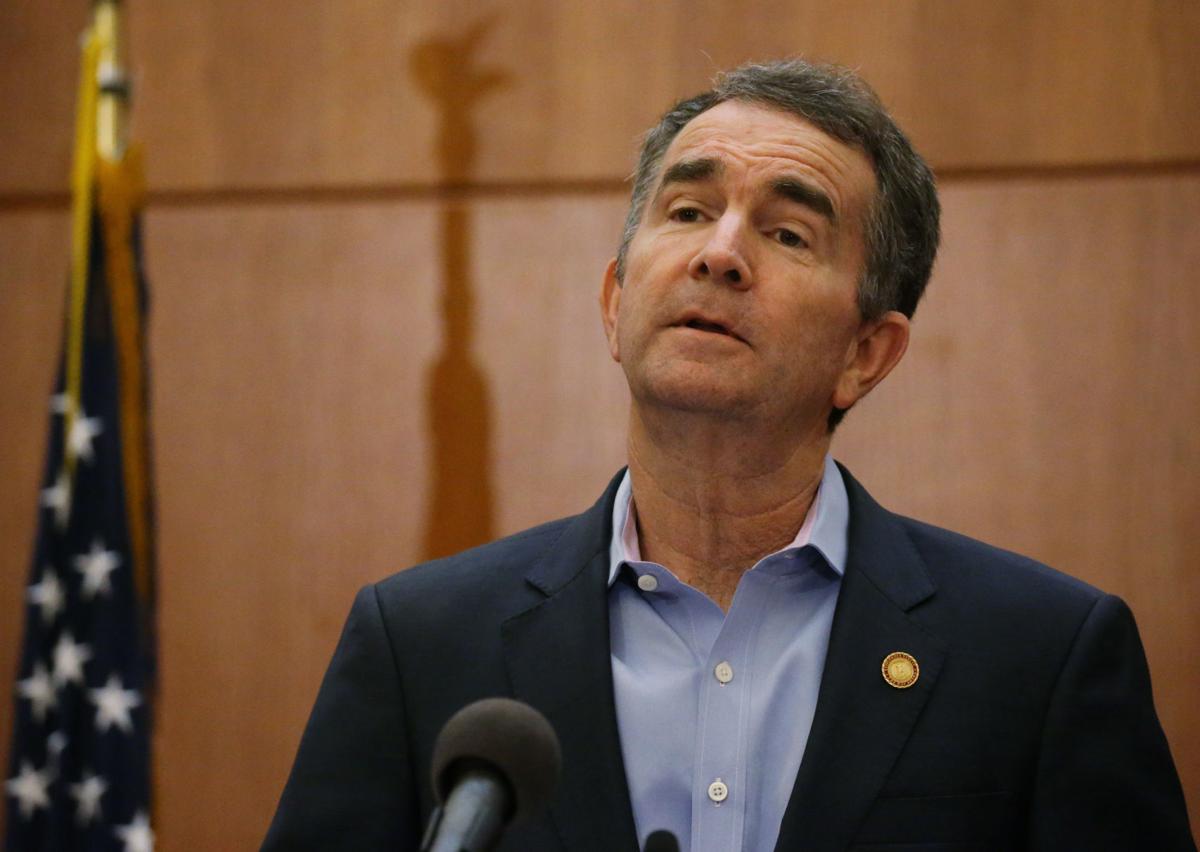 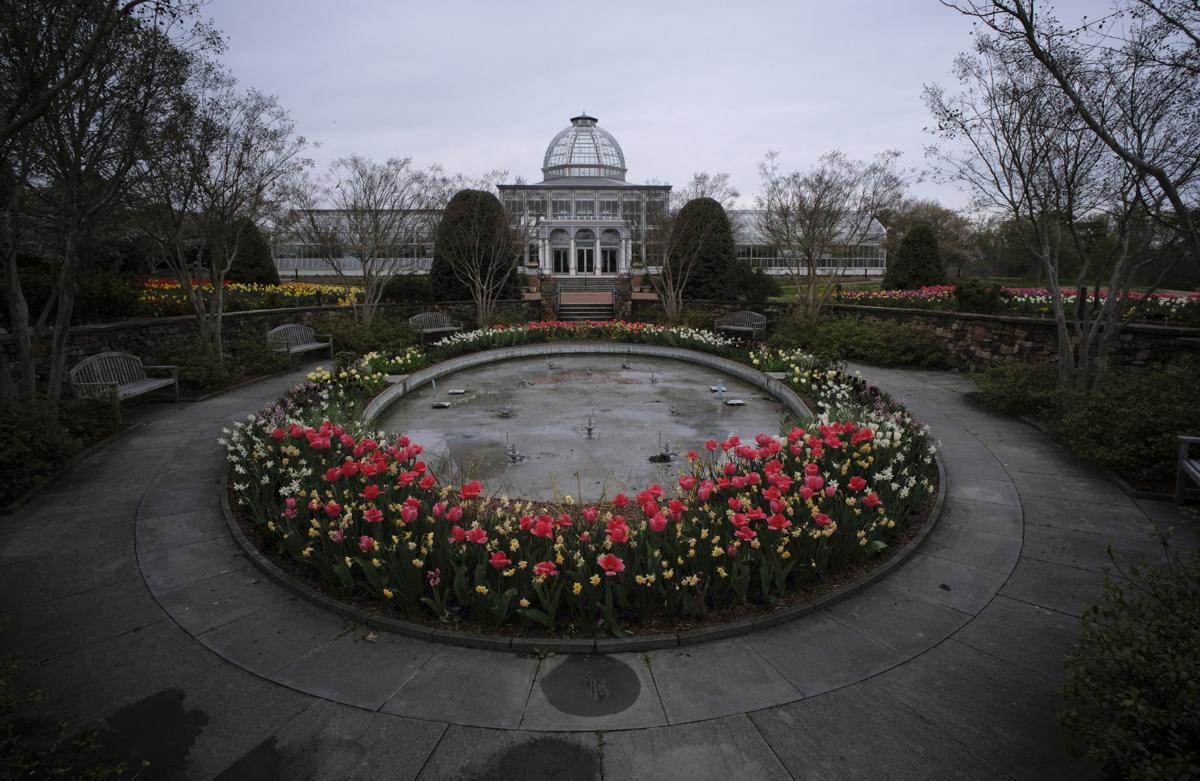 The main fountain was turned off at Lewis Ginter Botanical Garden in Richmond, VA Friday, March 27, 2020. 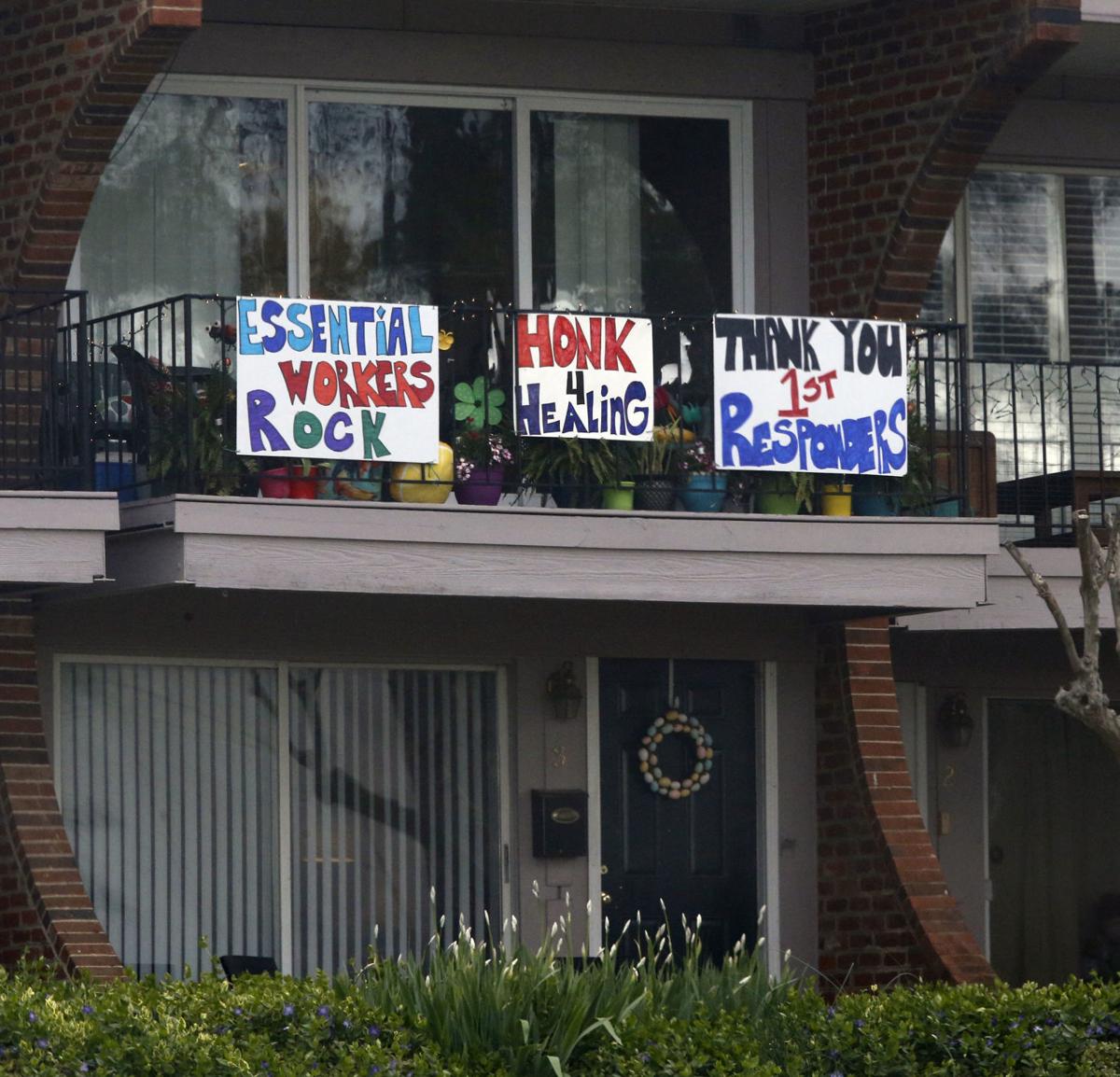 Posters hang from a balcony at the intersection of Bremo Rd. and Grove Ave., a few blocks from St. Mary's Hospital. in Richmond, VA Wednesday, April 1, 2020.

The main fountain was turned off at Lewis Ginter Botanical Garden in Richmond, VA Friday, March 27, 2020.

Posters hang from a balcony at the intersection of Bremo Rd. and Grove Ave., a few blocks from St. Mary's Hospital. in Richmond, VA Wednesday, April 1, 2020.

“I want Virginians to prepare themselves for the long haul,” he said.

At Northam’s briefing, Virginia Health Commissioner Norman Oliver said officials are working on models that project the spread and peak of the outbreak, and they hope to be able to share Virginia models in the coming days.

Oliver said there were 1,484 confirmed cases of COVID-19 across the state, an increase of 234 from the previous day, with 34 deaths in Virginia. A woman in her 90s was the third death in Richmond from the coronavirus, officials said Wednesday.

The Virginia Department of Health said Wednesday that 15,344 people have been tested for the virus in Virginia. There are coronavirus cases in 98 Virginia cities and counties. On March 19, state health officials said there’s a lag in the reporting of statewide numbers on the VDH website. Figures on the website might not include cases reported by individual localities or local health districts.

Northam said the state has received a third shipment of personal protective equipment for medical workers — such as gowns, face shields and masks — from the national stockpile, but he said the state still needs more.

Northam said he understood that Virginians are struggling with isolation and job loss amid the coronavirus spread.

“I’m already thinking and planning on how we can land this plane on the backside of the curve,” Northam said, referring to an expected surge of coronavirus cases in the coming weeks. “But for now, we are at the beginning of this virus, and that is why it is so important for Virginians to stay at home. If we can all stay home, we don’t give the virus the chance to infect the next person. We slow it down.”

Lewis Ginter lays off 83% of staff

Lewis Ginter Botanical Garden announced Tuesday staff layoffs due to the economic impact of the coronavirus.

A spokeswoman for the garden said 89 staff members — or 83% of its staff — will be laid off by June. Lewis Ginter has 107 staff members.

The garden hopes to reopen positions as soon as it can, and will let current staff know when that has happened with the hope that they will want to return. A core group of staff will remain to maintain operations and prepare the garden for its reopening, according to a news release.

“With this move, the Garden is putting its affection for neighbors, partners and community first. The steps allow it to remain viable during this time of indefinite closure and ensures the nonprofit Garden will be here to reopen as soon as conditions allow,” Beth Monroe, a spokesperson for the garden, said via email.

Since the garden’s closure on March 15, those income streams have dropped to zero. The garden said that a draw from its endowment provides financial stability, but only for limited operations while the garden is closed.

In a message posted to its website announcing the layoffs, the garden said, “Our hearts are broken, but our spirit is resolute. … We recognize the passion and efforts so many have put into the Garden, and we honor the work by ensuring the Garden can reopen.”

No severance is being offered at this time, but those being laid off will be paid through April 17. Accrued vacation time will be paid out where available.

Vice President Mike Pence on Wednesday traveled to Gordonsville in Orange County to tour a Walmart distribution center and highlight the importance of its supply chain amid the COVID-19 crisis.

Pence, accompanied by U.S. Secretary of Agriculture Sonny Perdue, thanked workers at the center for being “on the front lines” and “putting food on the table for Americans.”

“Thank you for doing a great job and keeping food on the table for the American people,” Pence said.

He added: “Here’s to that day in the future when we put the coronavirus in the past and come back stronger than ever before.”

Before his remarks, Pence chatted with Earnest Allen, a delivery truck driver for Walmart Transportation.

“I had to come out and see a truck driver. You guys are burning up miles every day making sure the American people have food, supplies,” Pence said.

An employee at an Amazon package sorting center in Hanover County has tested positive for the coronavirus, the company confirmed Wednesday.

An Amazon spokeswoman said the employee tested positive for the virus Tuesday but had not been at the facility since March 22, about 10 days earlier. She said the sorting center employs about 200, many of whom work part time.

“We are supporting the individual who is recovering,” spokeswoman Rachel Lighty said. “We are following all guidelines from local health officials and are taking extreme measures to ensure the safety of employees at our site.”

Amazon said it has notified all employees at the center of the confirmed case. The company said it would alert anyone who had close contact with the infected employee and ask them to not return to the site until after a self-quarantine of 14 days, for which they would be paid.

The company said any employee diagnosed with COVID-19 would receive up to two weeks of pay while they recover, in addition to unlimited unpaid time off for hourly employees through the end of April.

Amazon also outlined steps it has taken to prevent the virus from spreading in its facilities, including frequent deep cleaning of all sites, especially surfaces such as door handles, stair rails, elevator buttons, lockers and touch screens. The company also said it is taking measures to encourage social distancing, such as the elimination of meetings during shifts, spacing of chairs in break rooms and staggering work shifts.

An employee at the Kroger store at 1510 Eastridge Road in Henrico County has tested positive for COVID-19, an official with the grocery store chain said Wednesday. That Kroger associate is quarantined at home, said Allison McGee, corporate affairs manager with Kroger Mid-Atlantic.

“We are saddened by this news and wishing this associate the best as they get well,” McGee said in a statement. “We remain committed to the health and safety of our associates and customers. Since this associate last worked, an extensive deep cleaning & sanitation was completed. On an ongoing basis, we have aggressive cleaning and sanitation procedures in place at all of our stores and are continuing to adhere to all guidance from local, state and federal agencies, including the CDC.”

The employee has not worked at the Kroger store since March 13, McGee said. The store remains open.

Richmond Mayor Levar Stoney on Monday announced similar closures at city schools and public parks. The city is also limiting access to the James River. Swimming, sunbathing, congregating in groups are forbidden, but people are still permitted to hike or run along the river.

PHOTOS: Richmond and other parts of Virginia in the time of coronavirus and social distancing

Big retail chains are making changes to their operations to help stop the spread of the coronavirus, including to limit the number of customers inside stores.

Whenever Paul Wright’s wife asked him when he was going to retire, the 78-year-old veteran Greyhound employee would tell her he planned to work for just a few more years.

Richmond suffers 3rd death, while 2 more die at Canterbury as COVID-19 'starting to ramp up' and spread in community

A Richmond woman has died from COVID-19 — the third death confirmed in the city — as the coronavirus begins to spread outside of long-term care facilities that have suffered most.

As the coronavirus pandemic has disrupted daily routines in recent weeks, many residents in the Richmond region are steering clear of grocery aisles and are instead going online to check off the items on their shopping lists.

Virginia environmental officials said they will continue to enforce the state’s environmental protection rules, though they might provide some leeway for noncompliance that is directly caused by COVID-19.